1. Nominate one of our members' bikes for Bike of the Month - include up to 3 flattering pictures of the bike in question. This is an opportunity to recognize someone who's bike has inspired you. So please don't nominate your own bike - make sure you have a well detailed build thread, post up in the Show n Shine area etc. and if enough people like your bike, someone will nominate it and maybe you'll see it as our banner in an upcoming month!

The Nomination MUST be accompanied by the member's User Name, a link to the thread where their bike is best described (Build thread, Show n Shine etc.) and a PHOTO of the bike in question.

2. Someone seconds the nomination (please only second one nomination)

3. Member MUST accept the nomination - If you're nominating a bike, make sure you're in contact with the owner, that they want the bike included and they accept the nomination. The Nominee should provide some back-story on the project, especially if there is a limited build thread already in place.

4. Bike must be in running roadworthy condition - no basket cases. I know our bikes are never really 'finished' but it should be on the road and roadworthy.

5. If a bike has been nominated in the previous month it should not be included in the current month's contest. Skip a month and nominate in a subsequent month.

6. Bikes that have won in prior contests should not be included unless they have been modified significantly.

We will accept nominations for a few days till we have a good selection to a limit of 5 bikes per contest.

A poll will be set up and voting will take place for a week or so depending on timing. Whoever ends the voting period with the most votes wins

Ultimately the voters will decide!

As a reward, we will use a picture of the winner's bike on the site banner for the following month.

Staff member
I was trying to be helpful to find a pic of the bike to post here, but all I'm finding are (very nice) shots of specific details. Someone get a full bike pic of the finished bike up here!

DTT BOTM WINNER
I don't think anybody else has finished a bike for six months, it's all just threads of people yelling at eachother.

DTT BOTM WINNER
I don't know if I'm allowed to second Logan's bike, but I'm doing it anyway. I love the bike except for the parts that Junior did.
Otherwise it's a badass cafe racer.

DTT BOTM WINNER
In the event Kiley can't second Logans 3RM. I will be delighted to do so. 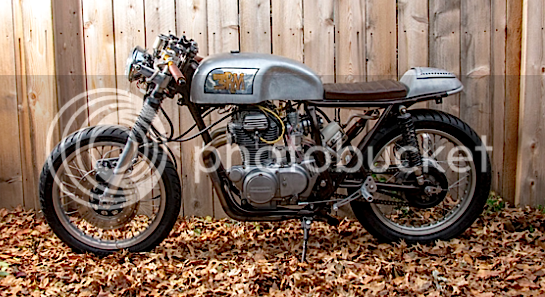 Kanticoy said:
I don't know if I'm allowed to second Logan's bike, but I'm doing it anyway. I love the bike except for the parts that Junior did.
Otherwise it's a badass cafe racer.
Click to expand...

never trust a man with a chin fro,just saying!!

DTT BOTM WINNER
I'll come down there and feed you a Tony Lama, babyface

Rich Ard said:
I'll come down there and feed you a Tony Lama, babyface
Click to expand...

LOL Crap, I hate having to choose. Logan you should have waited to post the finished pics of the 3rm until Dec. Now you or Jihn will have to wait a damn month to be re-nominated!

As soon as you pick up the Pace

Thanks for nominating my bike Brad, here is a link to the build: http://www.dotheton.com/forum/index.php?topic=20290.0

The nomination is humbly accepted. Thanks guys.

DTT BOTM WINNER
JohnU, we need to see that bike on a Motard/kart track shot with a long lens to blur out the background. It looks way too functional to be laying around a pool like a pampered teenager. It should be in its natural habitat - a race track (or a road that looks like one)