NoRiders said:
I think the red stripe will enhance the alloy cap too. In view of the tie down strap....would you consider a wider stripe?, say 70mm? or a coachline along both sides...
Click to expand...

That's the current plan .... 50mm stripe which drops nicely into the Monza cap well with a 5mm stripe either side a further 5mm apart from the main stripe - 70mm overall ..... great minds NR !!!

Another whatif is taking the stripe out around the cap well [ so cap well is solid Red ] and taking the outer stripes to follow.

The reason for this is .... IF I decide to use the half fairing I will do the "number plate" oval in solid red with the "55" number in Silver ] masked ] and again [ maybe ] bring the stripe through the dash and over the fairing front and again take the outer stripes around the oval.

Don't even want to think about the side panels and belly fairing at the moment !

So in the next lifetime .... I will be a Welder and a Photoshop genius.

DTT SUPPORTER
Well at least there's something there to discuss now !

The idea was to have a 1/4" stripe outboard of the main stripe, but the 1/4" striping tape hasn't arrived. So out with the 1/8" tape as another whatif.

Originally I took the main stripe through the Monza cap dip - but it didn't look right. Plan B was always to fill the depression in Red and run the stripes round the outside following the solid Red .... that didn't look right either and now I'm undecided whether to just take the outer stripes into the dip - as pix. Plan C is to run the inner 1/8" stripe straight [ as is ] and run the outer stripe round the outside of the filler depression.

The hold down strap is round at Brian's - can't get that until tomorrow so that might throw in another curve ball. In fact I think it might be too much. It's only cosmetic anyway.

Oh yes, imagination required for the stripes the other side of the tank !! 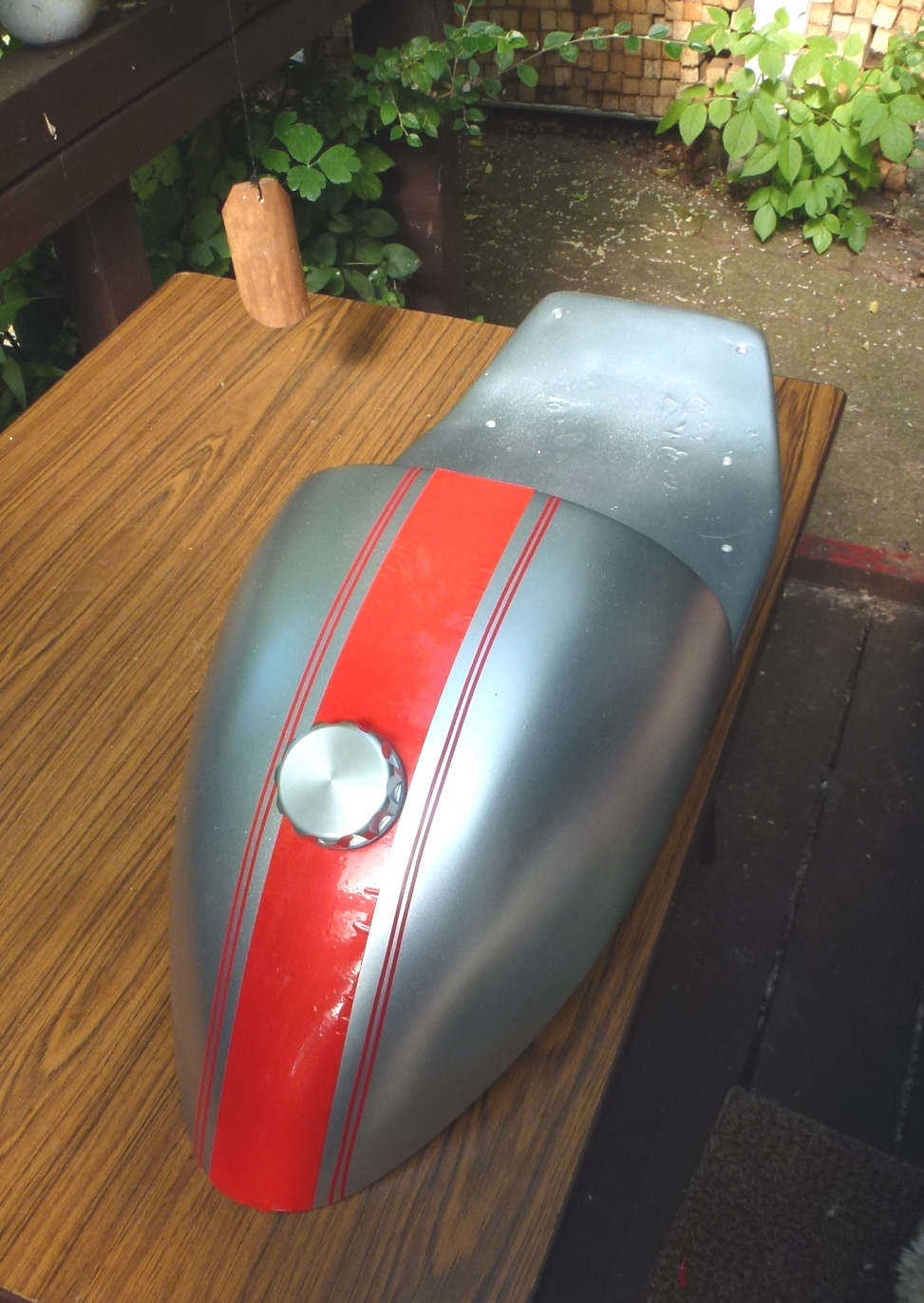 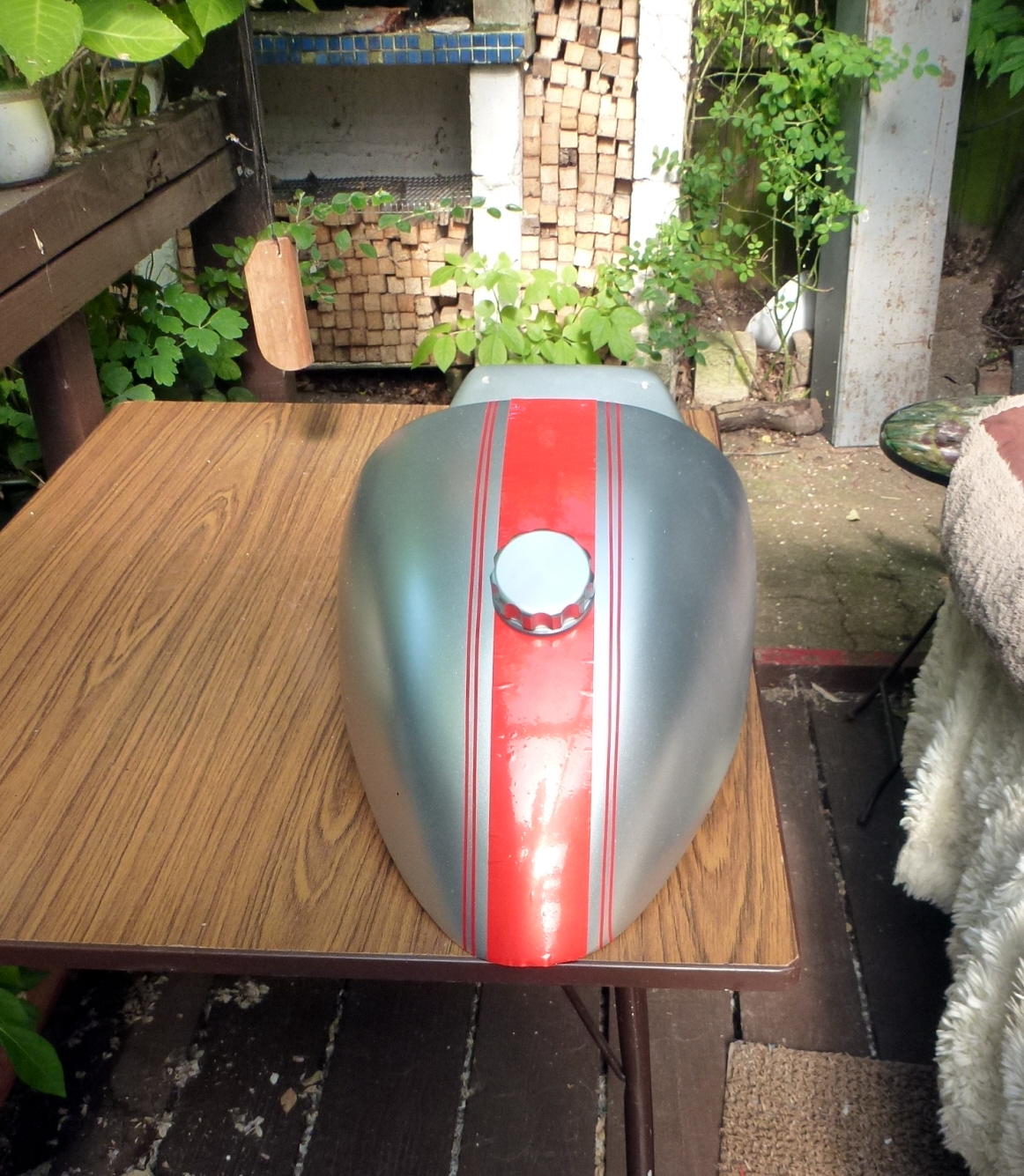 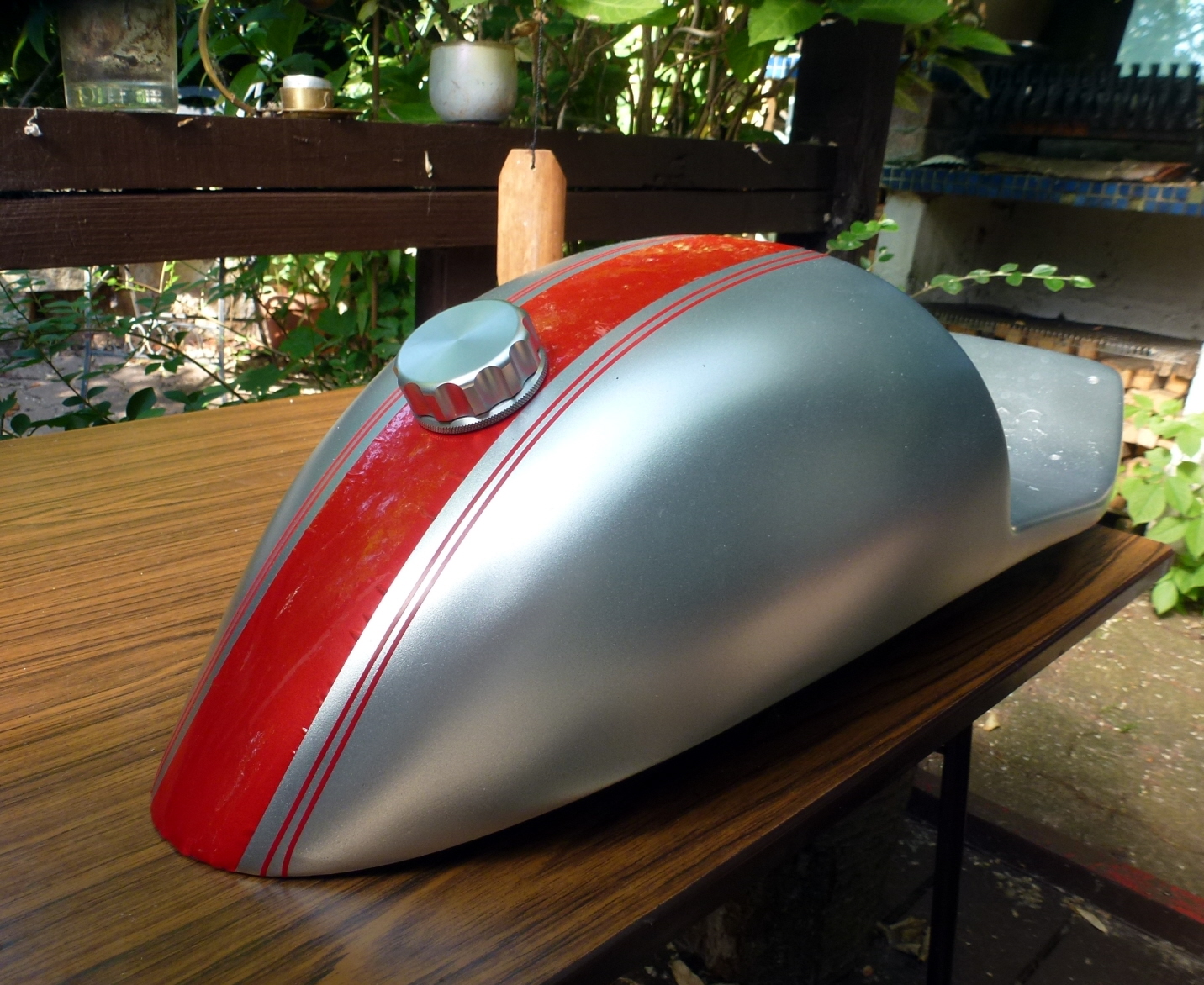 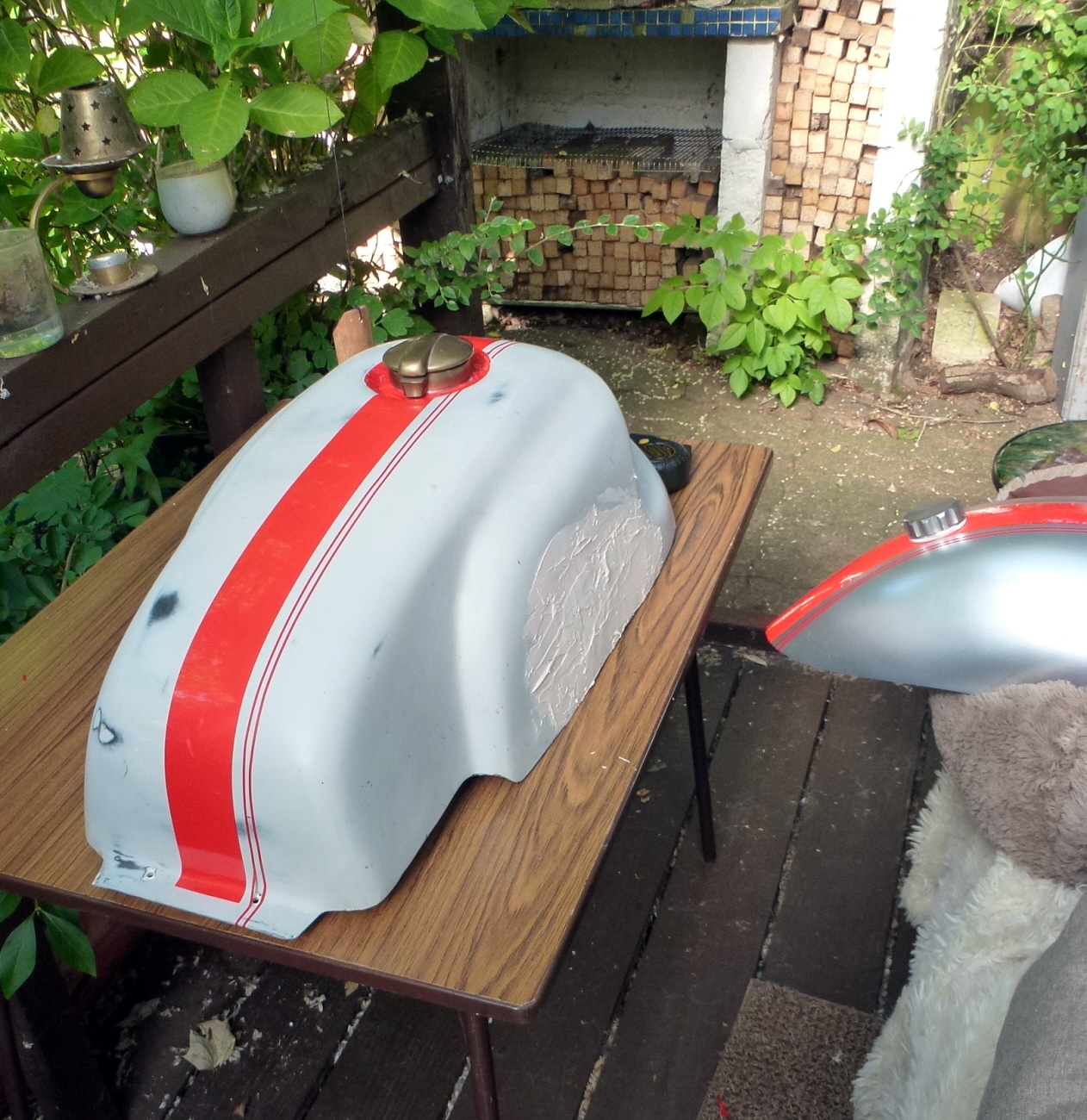 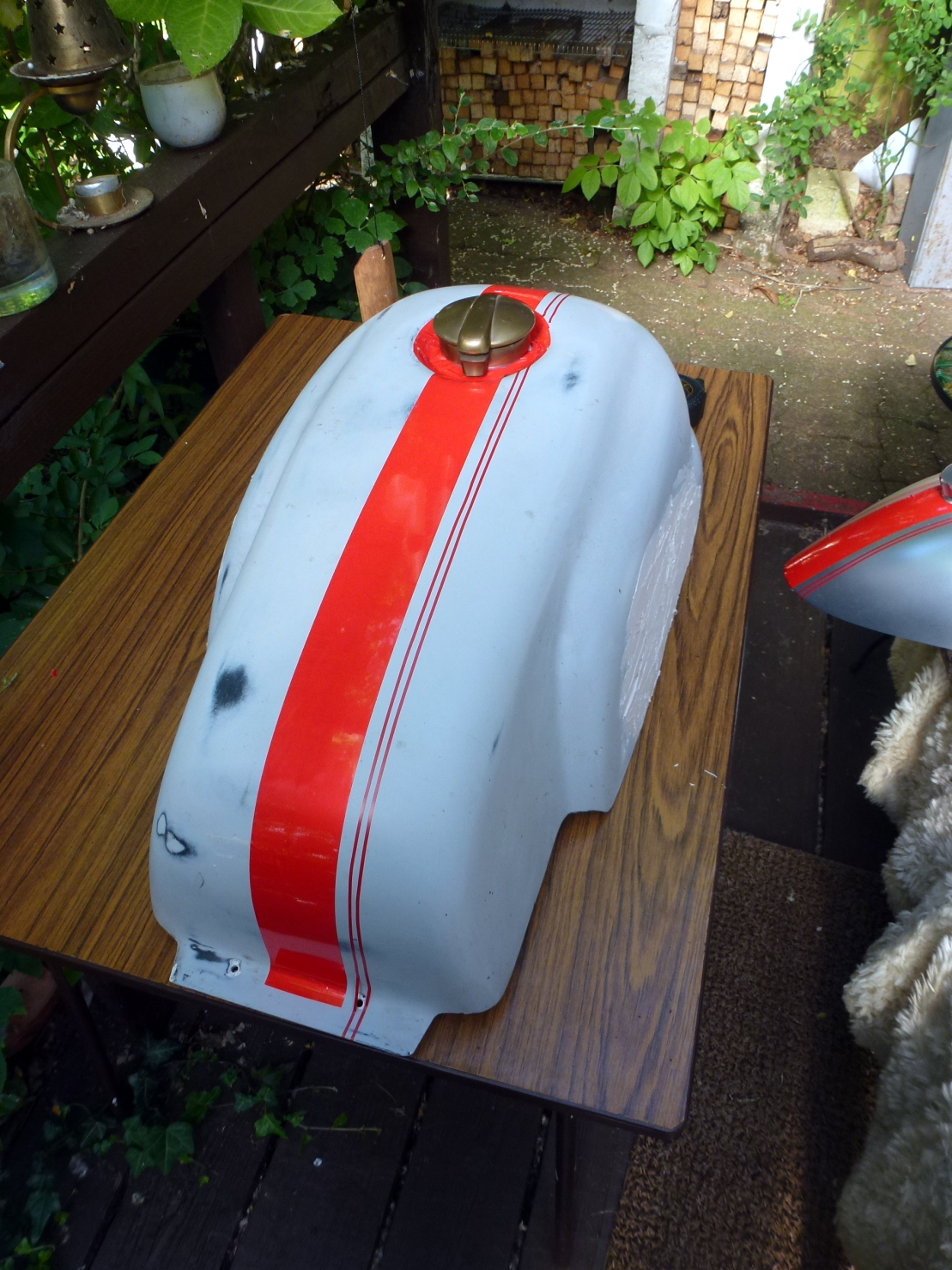 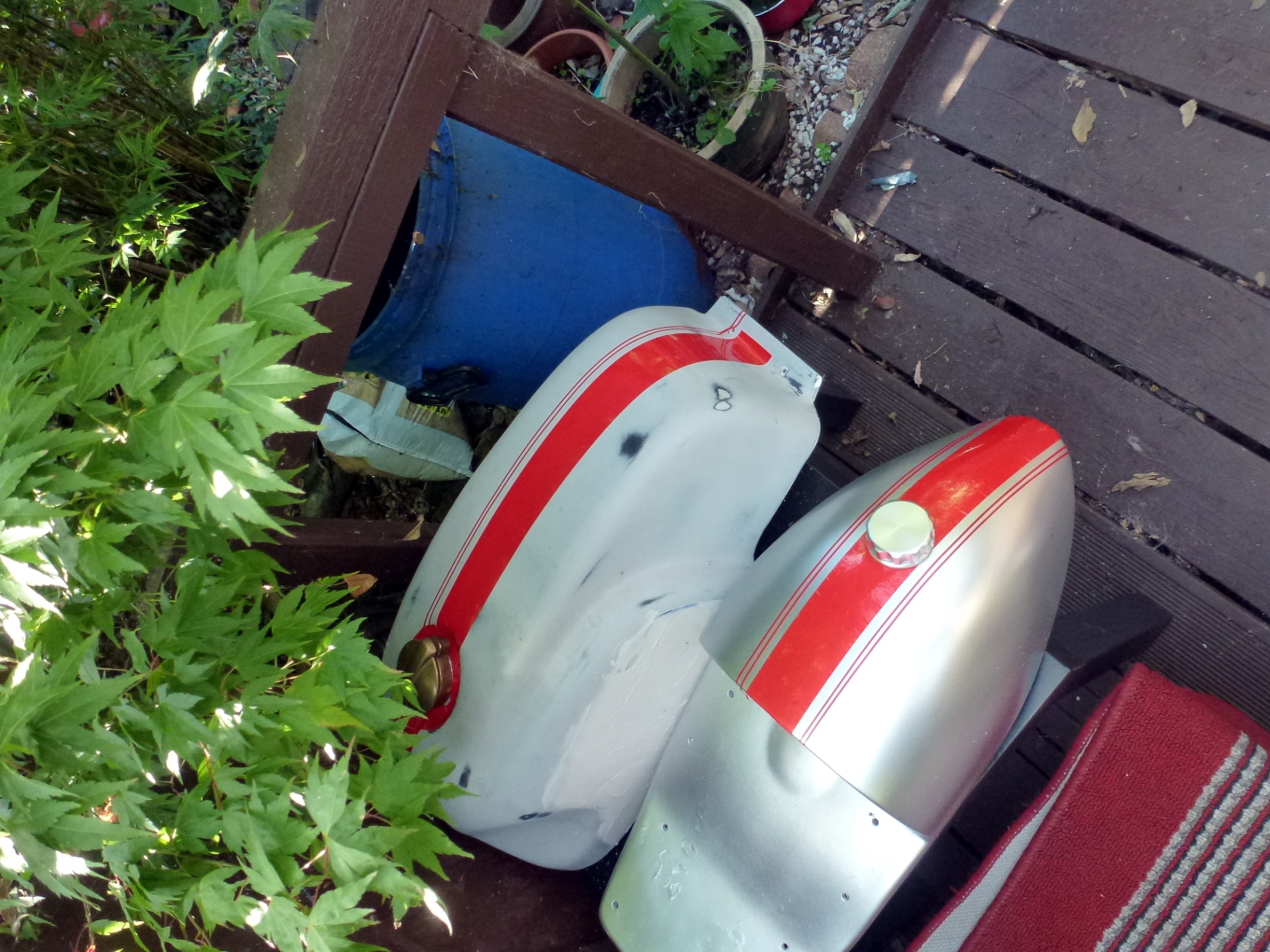 DTT BOTM WINNER
Is that the same red as the frame? It may just be the way the light hit it, but with such a bright silver, it looks like it needs something darker to create a stronger contrast. An alternative might be to go with a charcoal or at least darker grey stripe for a subtle look.

If you did the outer pair of pinstripes in black it would work but would look like a Yamaha TZ.

And I would keep going straight with the stripe around the filler recess or go with a much wider stripe. A round blob looks odd to my old eyes.

Keep going. You are getting really close now.

How about you just stop all the stripes at the dip (on a curve) and restart them on the other side, would that look better?

The "stripe" is simply some self adhesive 2" wide reflective tape I got to give me an idea. Unfortunately I'm no good at Photoshopping !

The stripes will be painted in the same Post Office Red as the frame .... I already have the paint. At one time I had thought about using a Maroon for the stripes, but that would clash with the frame.

Yes the obvious answer is to have the centre stripe wide enough to cover the Monza cap depression, but then it will be relatively wide for the seat. At least as wide as the current outer stripe. If I delete the centre hold down strap then the single broad stripe [ 2" wide ] looks OK passing straight through the cap depression.

I did have the 2 outer stripes going round the depression, but it looked too fussy. Then the inner one going straight through and the outer one following the curve. However they didn't want to stay put in the heat today !

Fortunately it's all just stuck on at the moment so I can play around with combos. I'll be more certain when I get the centre hold down strap from my pal's tomorrow.

Great minds again ! I had thought of using darker grey / charcoal stripes instead of Red ..... maybe even in Satin / mat finish. That was a colour combo I had on my old RS Camaro [ '69 ].

Pete - thanx for your interest .... That was the first stage today [ add tape bit by bit ! ], but it didn't look as good as going straight through.

Pete12 said:
How about you just stop all the stripes at the dip (on a curve) and restart them on the other side, would that look better?
Click to expand...

That's what I do with modern flush filler caps. They are raised or flat - rarely recessed, but the look might work. Leave the recess in the same color as the tank to reduce attention.

DTT BOTM WINNER
Could also do a pair of wide striped and dump the two outer pinstripes...

I am trying the same sort of thing on a Suzuki GT750 with Gus Kuhn replica tank which i decided to do a Manx/Dunstall side stripe and two 50mm blue top stripes on white base with 1" black pinstripes 1/4" out - sort of Dunstall sides and 73 TR750 inspired top. I'm just using masking tape to get shape ideas.

On the Ducati ST3 I'll use two 25mm wide white stripes across the top of the seat and tank which will be red with matt black lower part to create a visual table top look. The seat is carbon fiber, so I'd like to leave side "number plates" in gloss C/F on the tail.

If they look like crap, they can always be rubbed down and start again. Time to get out the Crayon Aided Design again.

DTT SUPPORTER
Wouldn't you believe it - when I got back from Brian's today the 1/4" Red tape had arrived. Oh yes, left the seat at Brian's !!!

The Manx style tank strap looks too fussy now with the stripes - backburnered for now.

We got the exhaust [ Mk4 ?? ] sorted out and we finally have a layout we are happy with. I need a short [ 12" ] length of stainless tube to make up the various slip joints then welding can commence. Pix to follow.

DTT SUPPORTER
Quite a bit of progress this morning.

The exhaust routing has been mocked up and I have to get one more piece of tubing and the actual build up can begin.

The collector WILL be in line with the headers on final ass'y and the silencer will be tucked up as high as possible under the seat with the tip facing down. 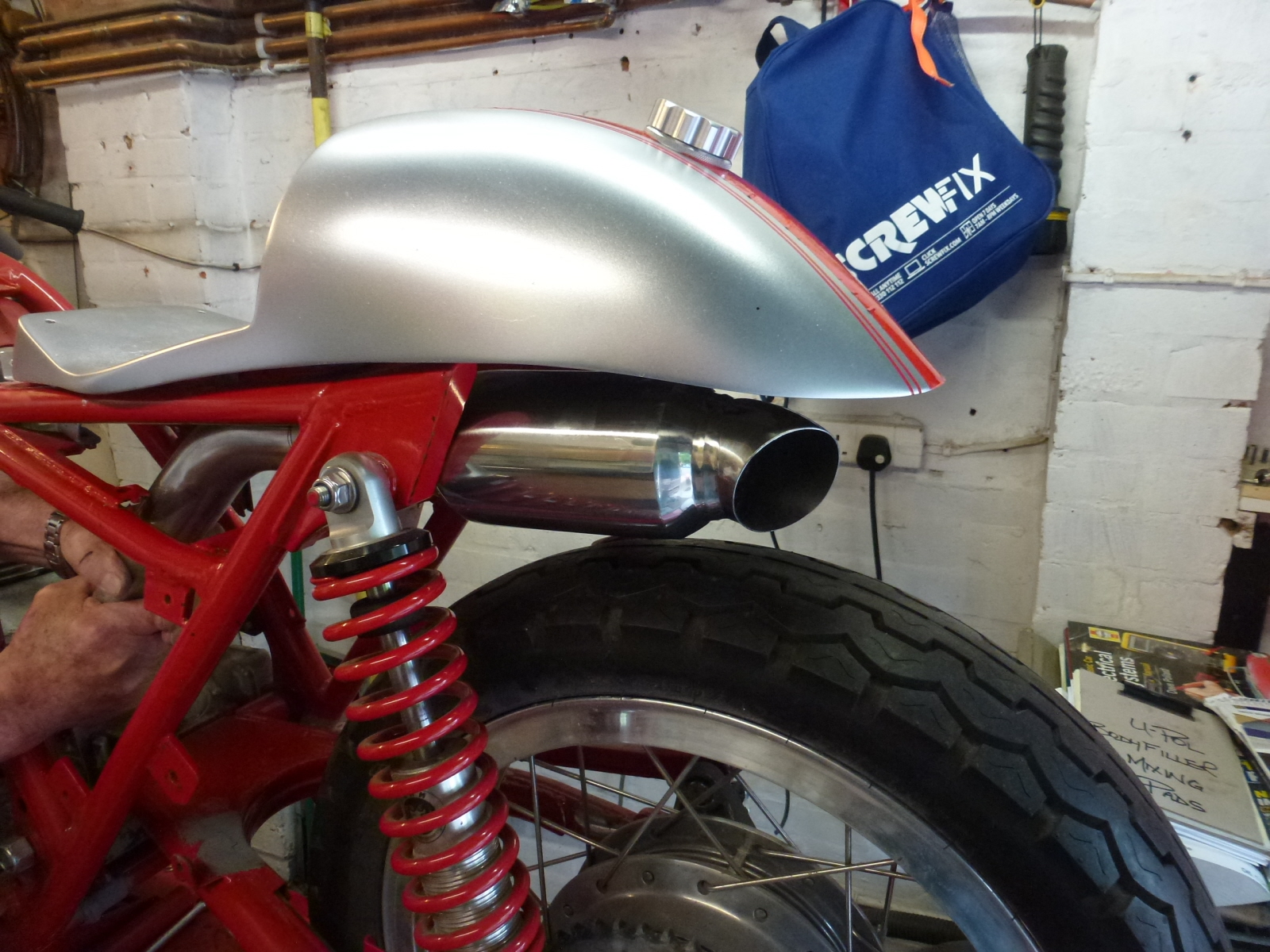 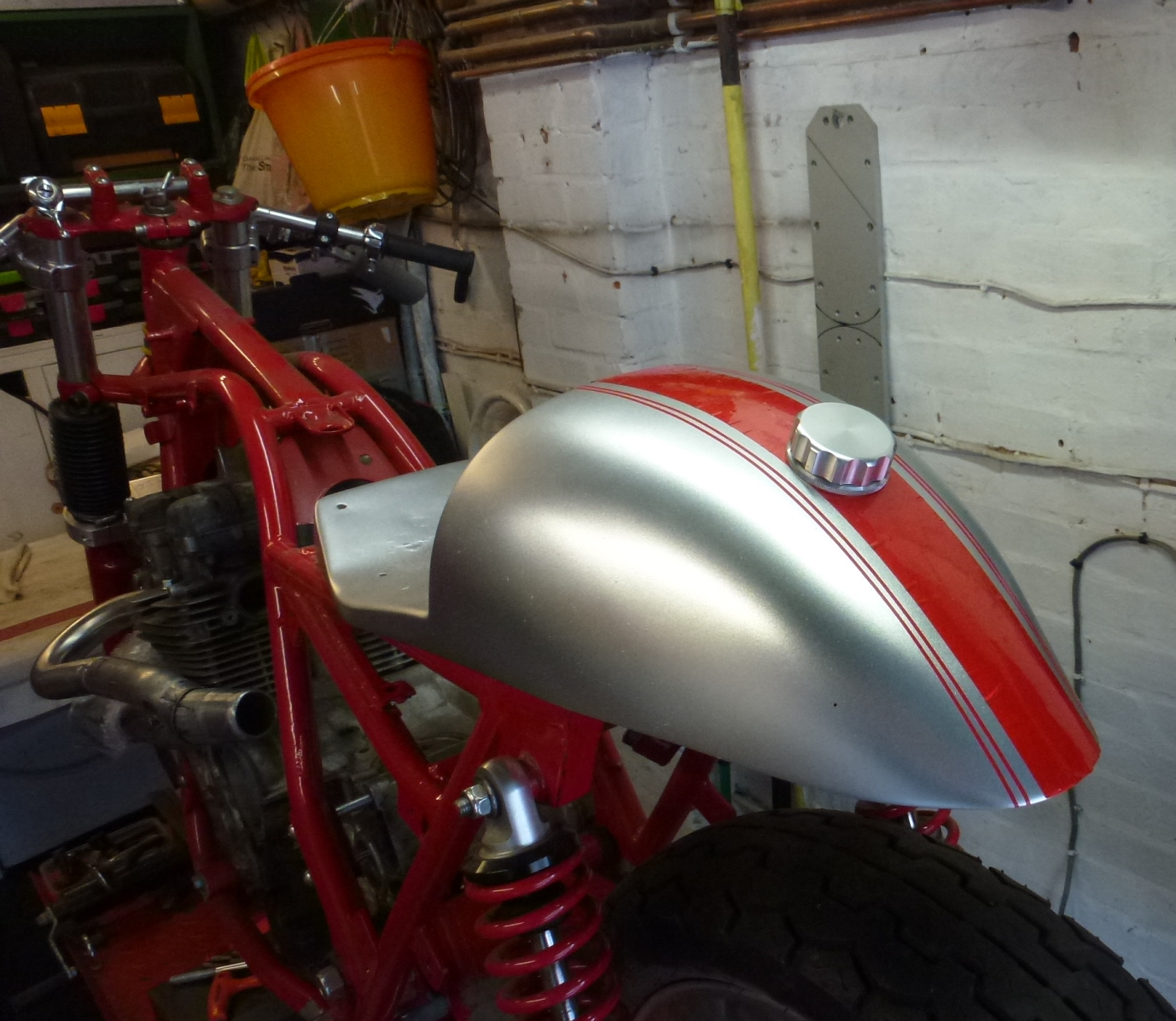 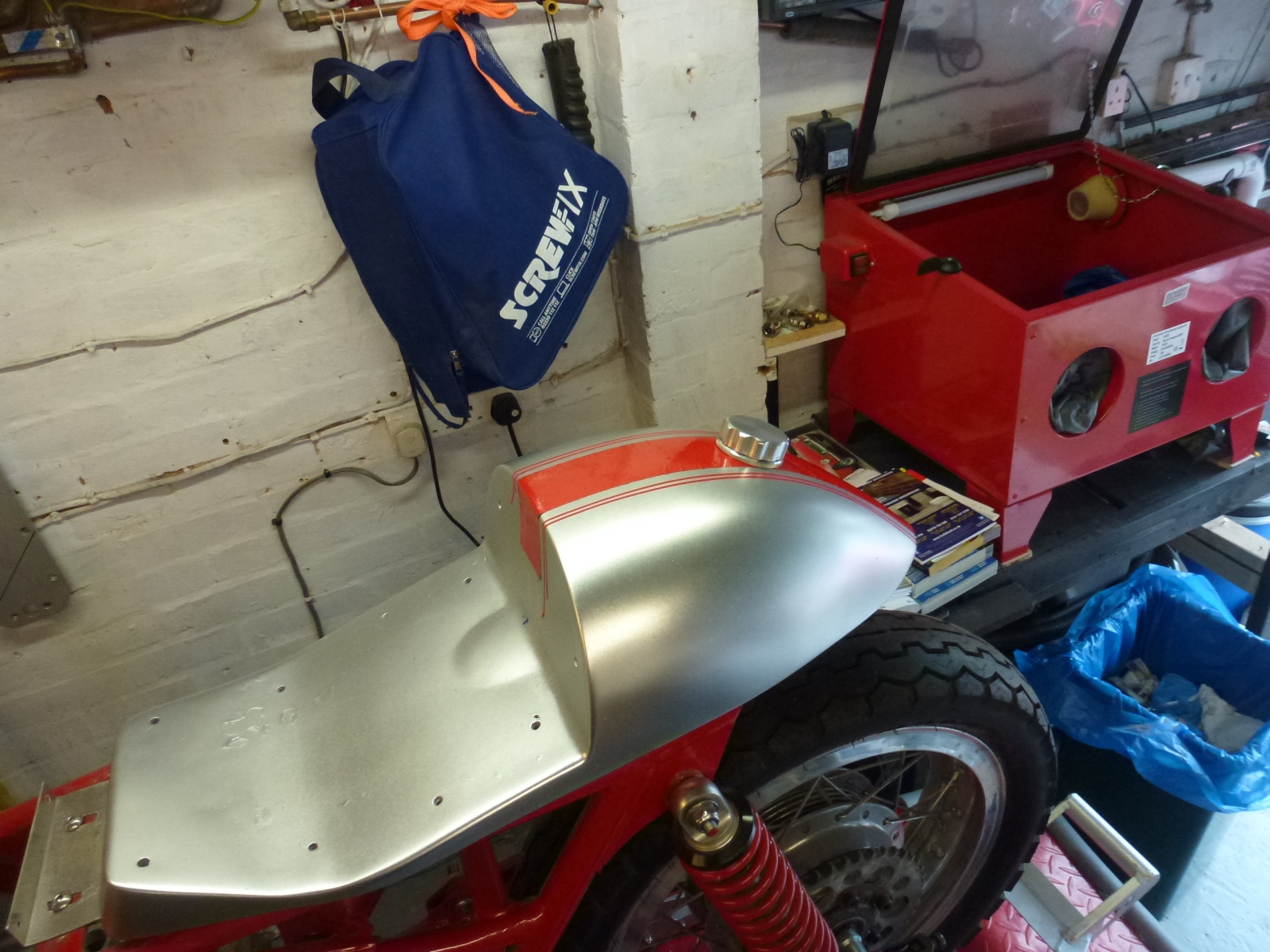 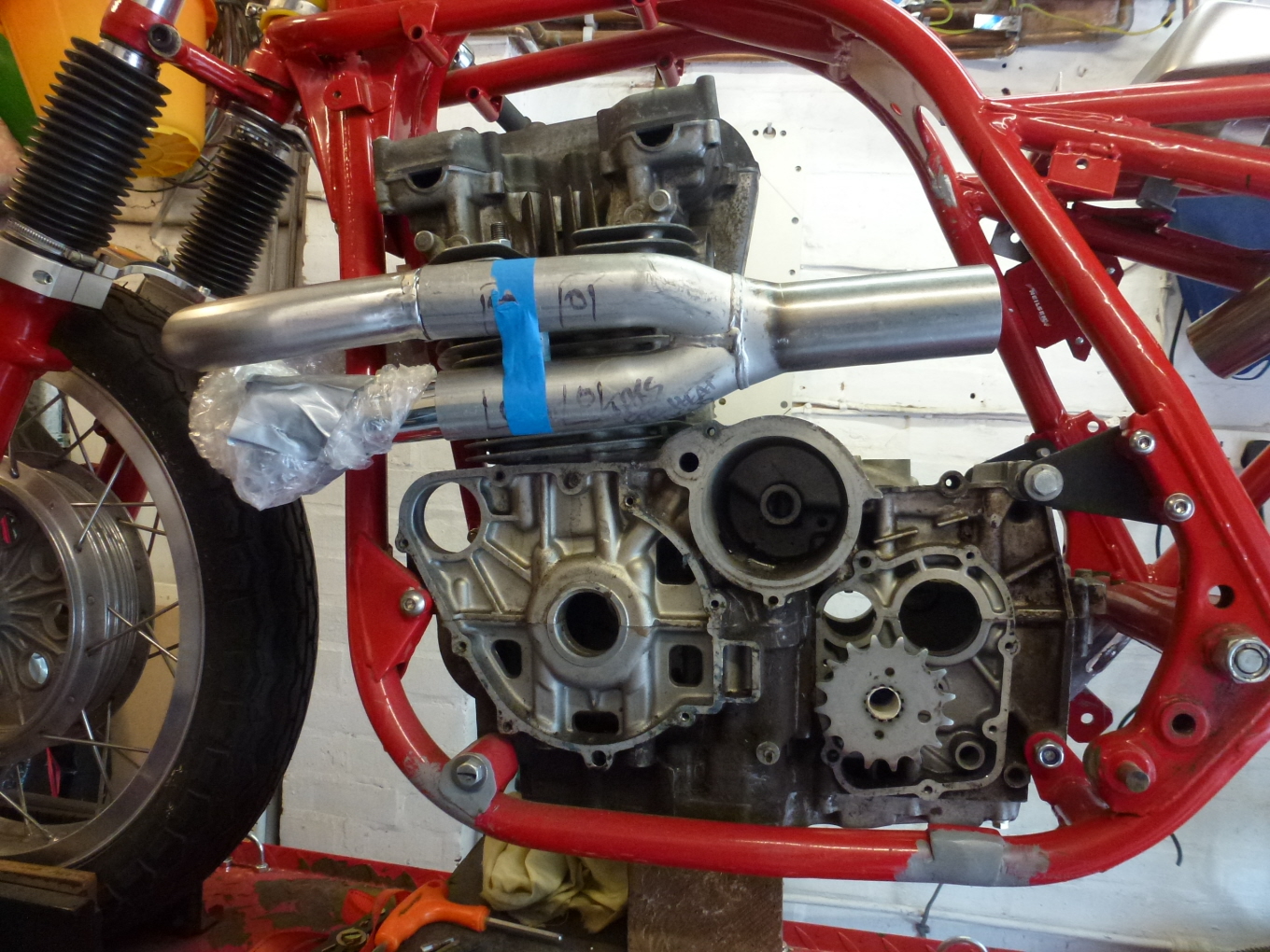 Thanx for your feedback Hurco.

No, it was in the correct location when we aligned the rear wheel sprocket [ 'ish ] but I had to take off the generator cover [ sold with my original engine ] and we knocked the sprocket on the floor and my pal stood on the cardboard "bearing" that was holding it in the correct place !

I have a second [ 3rd actually ] late model donkey that we will drop into the frame to lazer align the rear sprocket. It's a bottom end only as I bought it for a total rebuild before I got the current complete low mileage motor.

I got some more of the 2" Red tape, so I'll mock up the left side of the tank with the centre band level with the outside of the Monza recess - and then a 1/4" / whatever outer stripe.

When I retrieve the seat from my pal's I'll do the same there, mock up one side. The Jury is still out on the subtle Gray stripes.

DTT SUPPORTER
I think we are there now - thanx for everyone's input.

Broad stripe to the outside of the Monza cap depression with 1/16" [ shown ] or 1/8" outside stripe. I just need to confirm it works Ok on the seat.. Apart from anything else it simplifies the masking ! 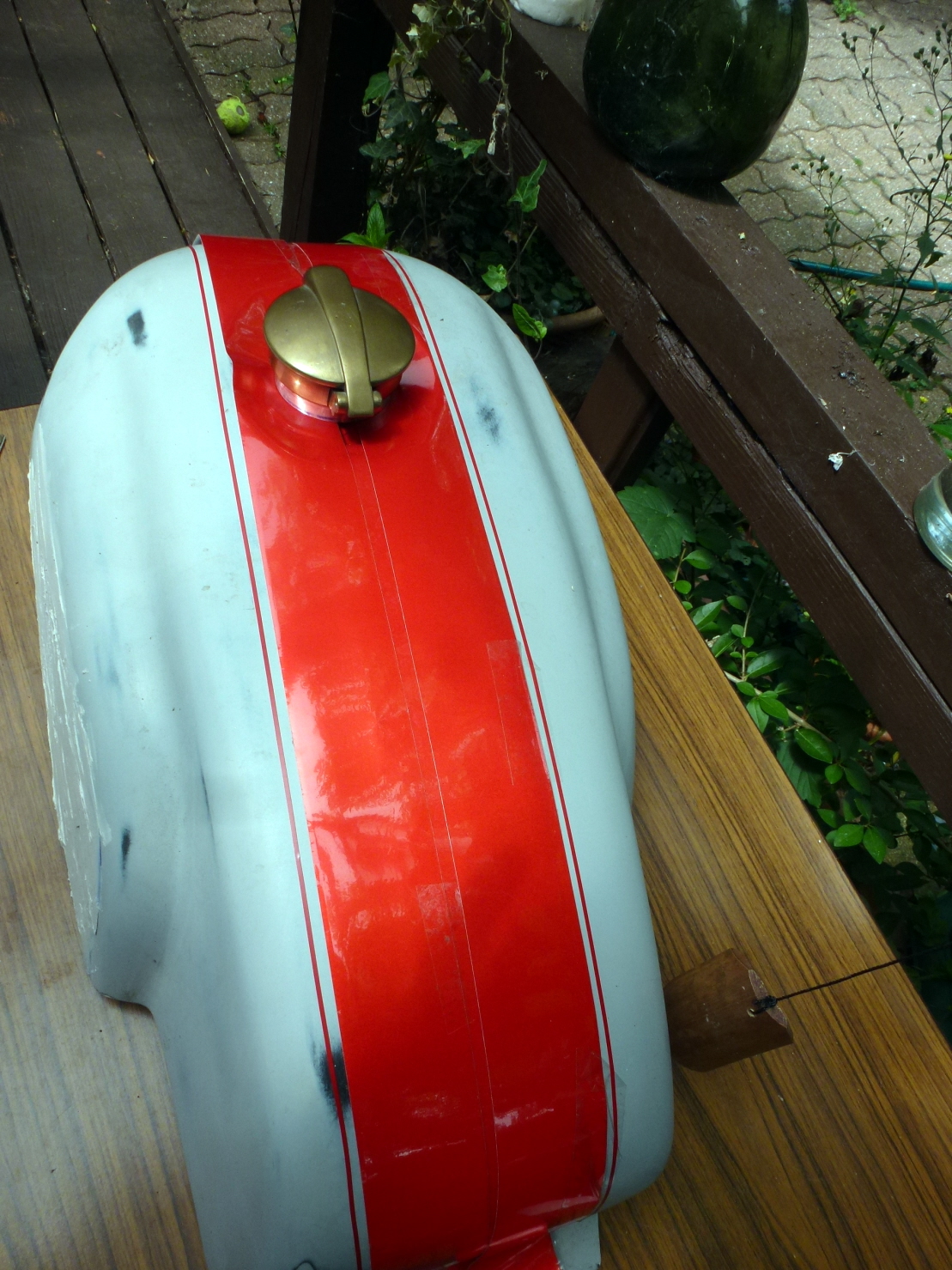 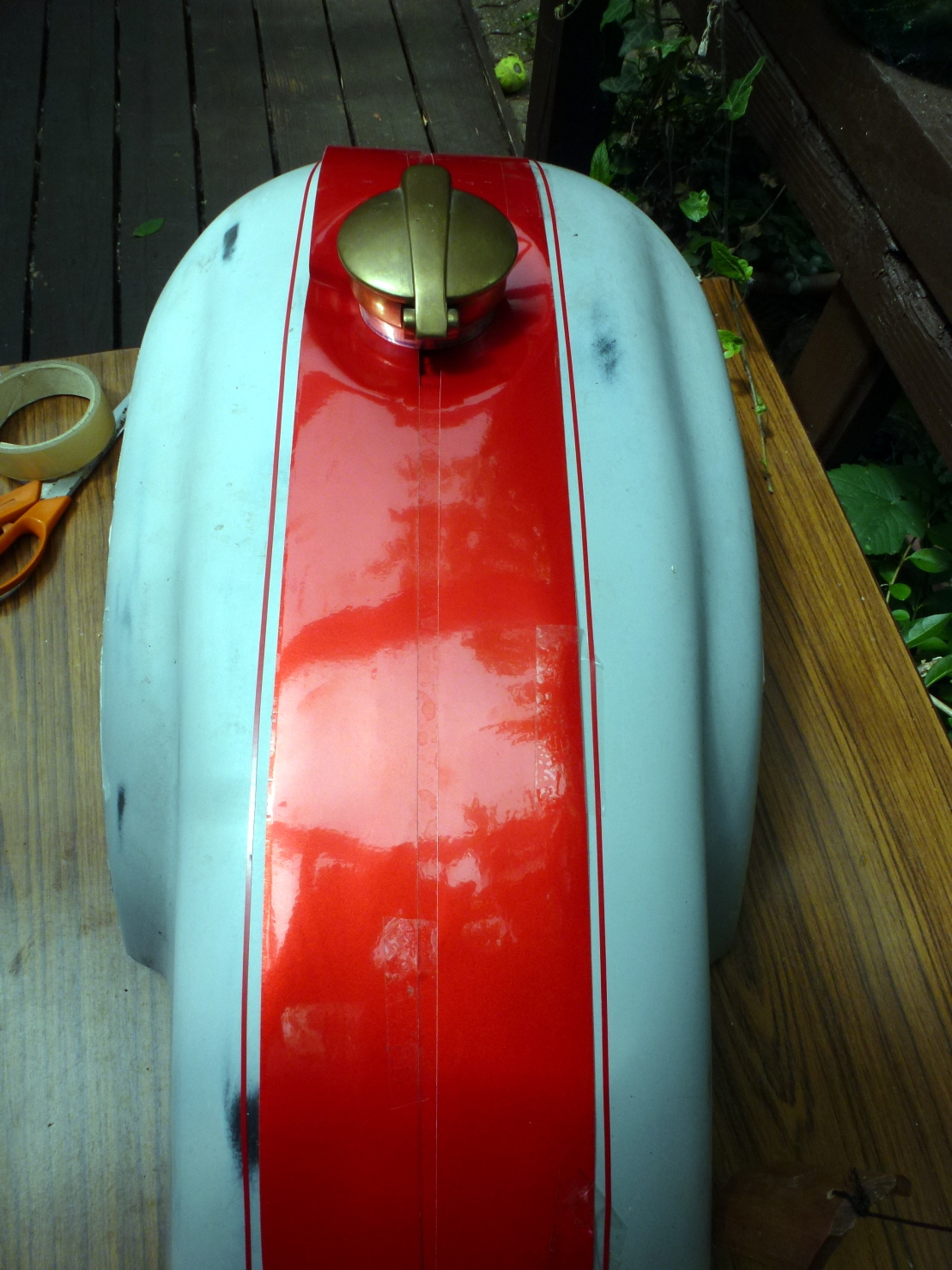 DTT SUPPORTER
Contemplating the bike's name down the centre of the full stripe [ vertical text ] as a cut out showing the Silver. Something like "Spirit of Glemseck" in an old Germanic script.

Guess that'll be another whatif mock up job !

I'd have suggested the same thickness stripe as in the first option but completely filling the depression in red and have the stripes follow round it too....then copy that for the oil filler in the tail.

But the broad stripe works.

The only thing I'd say about old Germanic script is....it's sometimes hard to decipher if it has too many flicks n tails....or too Nazi ish if it's more block style!!
We had a German/Old English style script on a VW club logo and it was virtually impossible for anyone outside of the club to read.

It's only an idea to have the bike name in the central strip and yes, I know what you mean with Germanic scripts.

What I didn't realise - until I asked a German pal this week - is that before unification [ the first one ] all the various states had their own scripts ! And even districts had their own variations, just like the accents. He suggested 2 as being legible, Schwabische - which is coincidentally from the Glemseck region and Lutherische, which as the name suggests is the script used by Luther. I've downloaded the fonts, but in my typical computer dummy style - I can't open them !

Originally I was going to put something in the "Manx" panel on the side of the tank ... but then one of the scripts would be facing the opposite direction.

It's something I can mock up and lay on - and like the exercise with the stripes, if I don't like it I can start again !

Are you going to do the small stripes in matching or a different colour?
T

First one is DS Luthersche second is Schwaben Alt

Why thank you kindly sir. I guess it would have to be the Schwaben given that it's from the same region ! I think I was seeing "Spirit of St. Louis" in my brain.

C&C - At the moment the outer pinstripes are Red in my mind, although the "Manx" side panel will probably be Red / Black. It'll be another mock up - probably when the tank is painted Silver, but before lacquering.

DTT SUPPORTER
Sorted - thanx to everyone who took the time to comment.

The 4" wide stripe it is then with 1/16" pinstripes either side. I mocked it up on the seat - that was my main concern if it would be too much on a small area, but it looks fine and the fuel filler cap breaks it up nicely for a bit of contrast.
All I have to do now is to carefully remove the adhesive residue from the paint on the seat !! It has yet to receive it's final flatting and topcoat using premium thinners.