Great build thread. I'm glad I ran into this thread as I'm in the process of building a "Shafty" as well. I have a few questions:

1. What year is the tank from? I remember I had that tank on a 82 Shafty 1100. Is it the same? I had an issue with clearance as well.
2. The rearsets... Are they GSXR or a set you bought online? There are also some reservoirs that are attached to the actual pump. You might wanna look into that. Bit more clean back there.

Yay, another one of us!

2.) Yup, GSXR with some hacked up and machined aluminum pieces to get them to fit. They are way too wide though, so this winter I plan on ditching these and making ones either from a kit or from scratch. As for the reservoir, you mean like a plastic tube with a bolt as a cap? I've seen that before, but I haven't seen any better looking reservoirs.
G 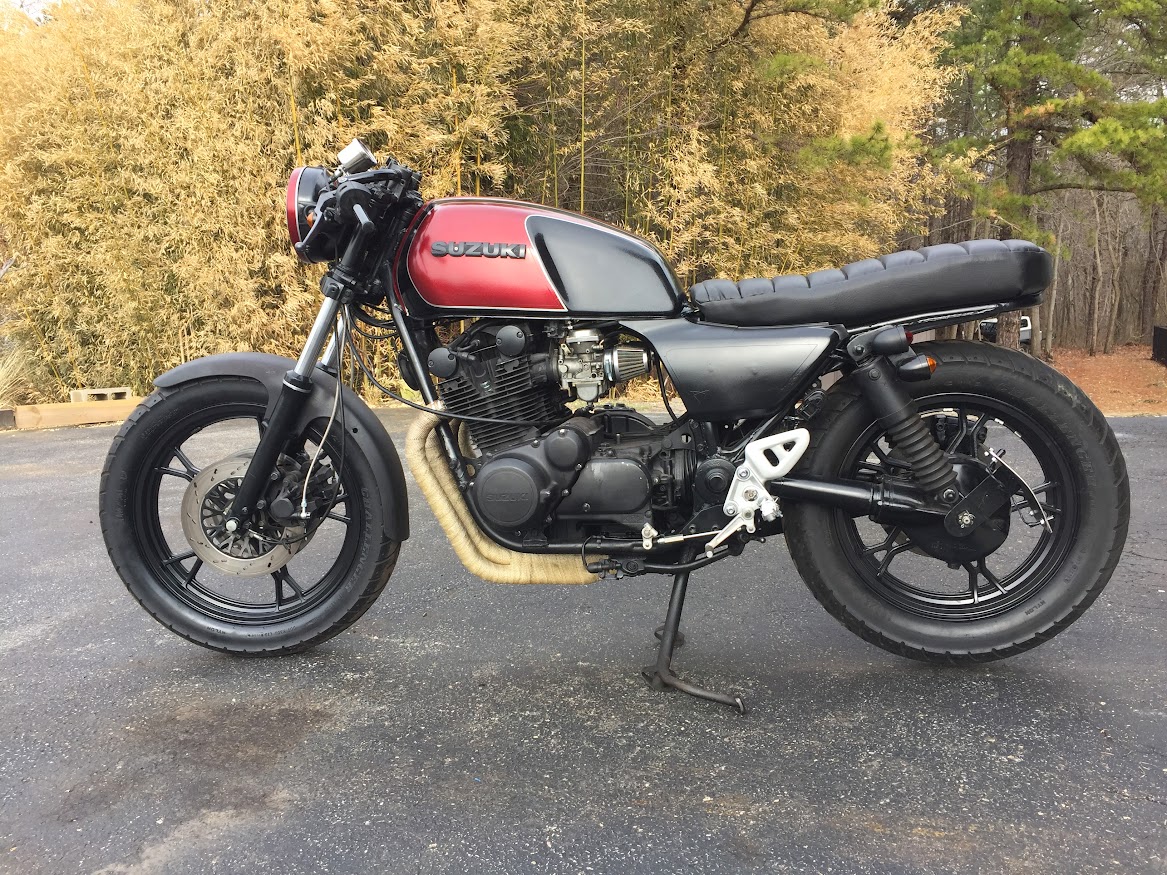 Nice! What rearsets are those?
G

Not sure of the year, but they are off a Hayabusa.
S

Thanks for the info! I looked and looked and did some Google searches and decided to go with a 1982 GS750 tank. Figured the front of the tank should give me more clearance when turning since the GS1100 on a previous build knocked on the tank when turning. 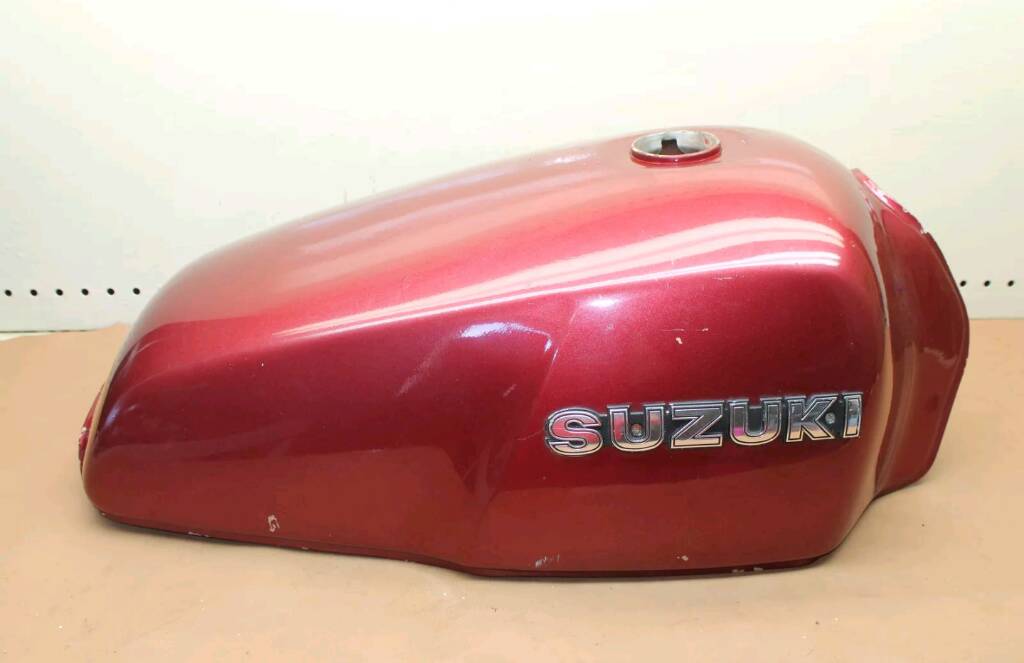 Well, I can't say I know what I'm doing with this thing. Tossed some black paint on my fender-turned-windscreen just to get a feel for it and I don't like the look. I'm going to try matching the brushed metal look of the tank and I think it will blend better, but I want to try just a standard headlight as well. 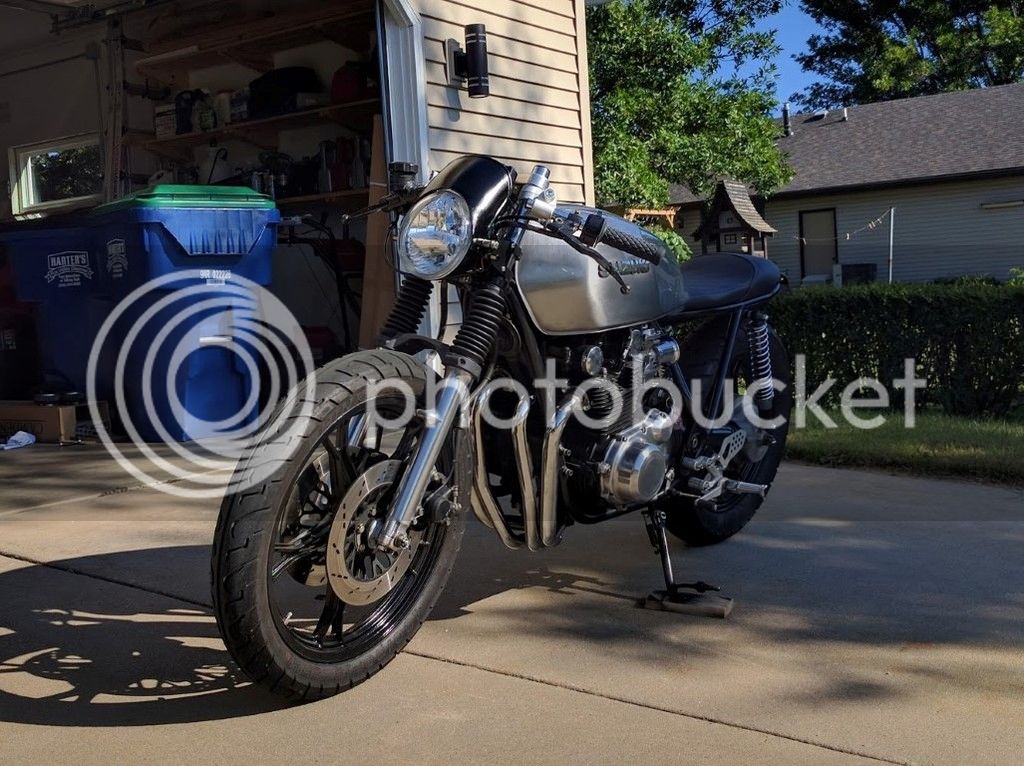 I got my velocity stacks in from Steel Dragon Performance. Those guys do awesome work. It seems to run harder at the top end compared to my K&N dual filters, but once warmed up it bogs pretty bad part throttle in the low end. This leads me to believe it's too rich. I've been tempted to get a wideband O2 kit, but I'll just have to tune this out by trial and error since my plug chop method isn't working at all.
J

Minor update. I splurged and got a Zeitronix Zt-3 wideband sensor and gauge to aid in tuning. We'll see how well it works. The sad part is the welder dropped the muffler which put some dents in it, and seemed to put a little too much heat into the weld. So the plan is to use this muffler for tuning and maybe get a stainless shorty.

Yes I know this is all overkill, but the bike just still isn't running right and I suck at this. 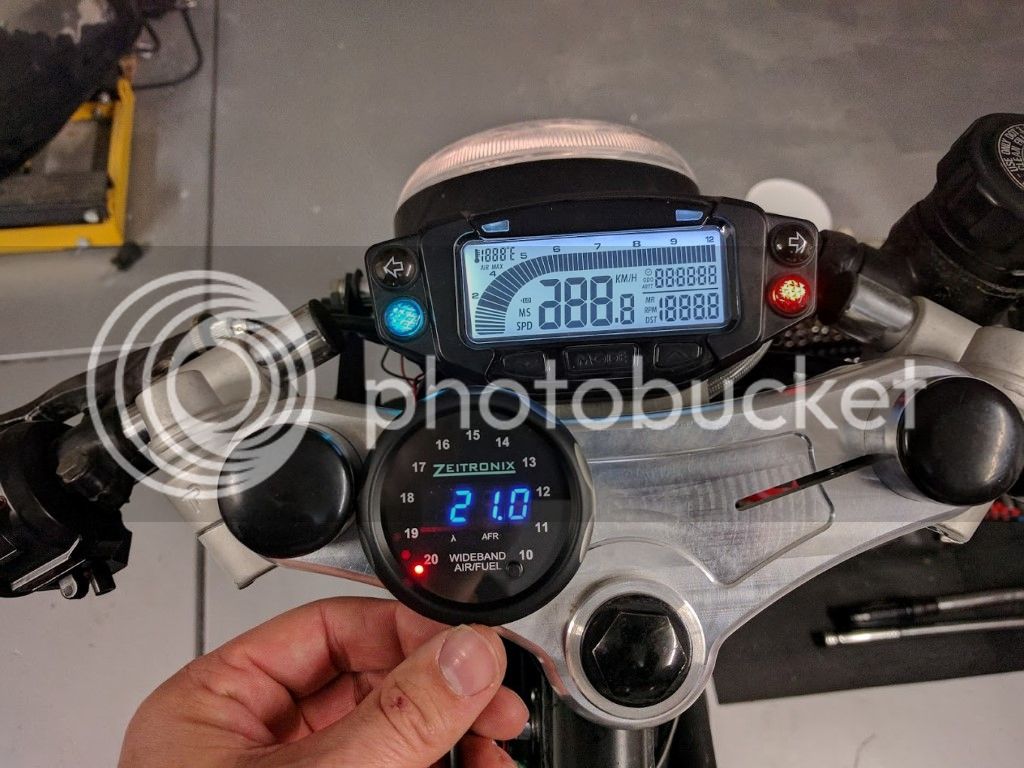 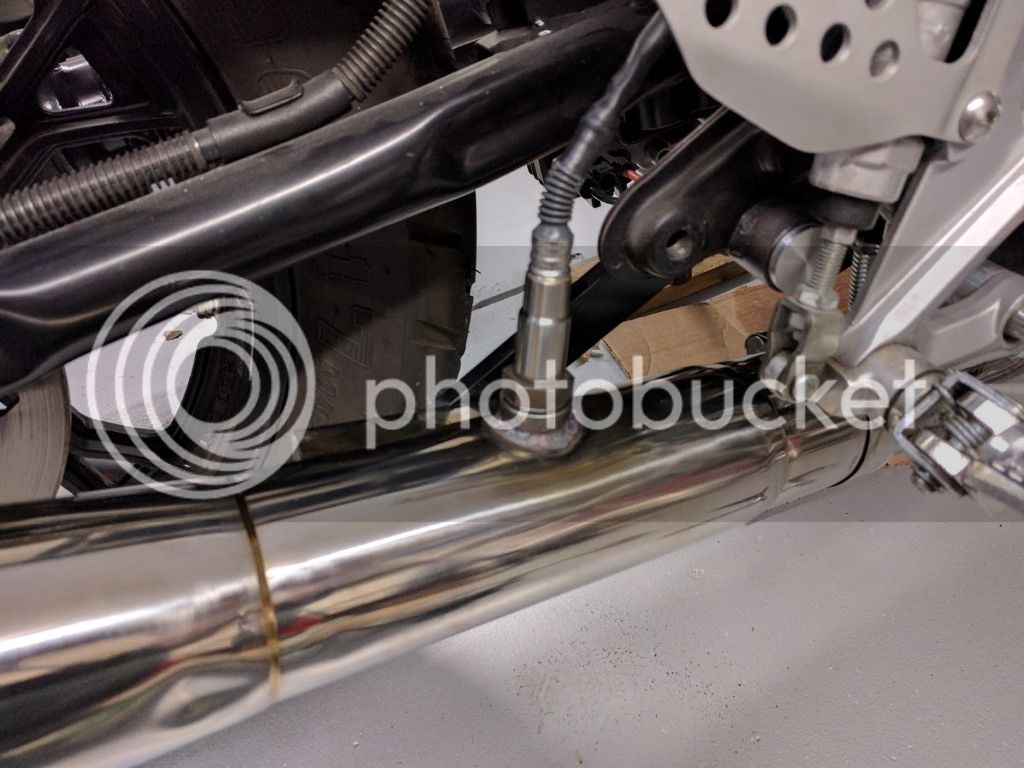 Does the 650 also have the BS32SS carbs? From reading, these seem be about the worst CV carbs to get to run right without airbox. Really interested to hear if you can get them to run right using the sensor, or if the stacks will help the situation.

I guess another option is to look for different carbs. Flatslide Mikunis are there of course, but way too pricey for me at least... For DOHC Hondas (where the carbs also don't like pods) there is a popular alternative using early GSXR carbs (e.g. BST34SS). They are also CV, but work a lot better without airbox and are just all-around good carbs, and can be had pretty cheap. Haven't heard of anyone putting them on a GS though... not sure if that's because the spacing is too different or because of something else.
J

I haven't worked much on the bike, but I just swapped out the 160 mains with 155 (these are Dynojet which is why the numbers seem so huge). I'm still pulling about 12.0 AFR WOT which is a tad rich, but man the cruise and part throttle are pig rich (like high 9's to mid 10's). I'll cruise around mid 10's, then just when I slightly roll on the throttle it will dive down into the 9's. Too much cruising around part throttle and I'll start to foul the plugs.

I'll hopefully have some time in the next few weeks to continue to tune. It seems to idle around 12 to 13, so I'll try the mixture screws again to start. I don't have the holes on the slides drilled out any larger, which is what Dynojet calls for. Did a lot of research on this before and I still can't figure out if this would affect AFR, or if it's just throttle response.

But yeah, these are the BS32SS carbs, and they certainly seem to be finicky with pods and worse with stacks. Others have said that you won't be able to tune out every throttle position / RPM.

Best of luck with the build!

I have a question. I am working on a gsx400f converting it to a caferacer and am looking for the same type of pod filters that you currently have. Could you tell me what the diameter is and center to center distance of your bike?
J

I have a question. I am working on a gsx400f converting it to a caferacer and am looking for the same type of pod filters that you currently have. Could you tell me what the diameter is and center to center distance of your bike?
Click to expand...