...or, rumors of my demise have been greatly exaggerated.
This is how it was advertised.

While I struggle for room in the new digs I had to leave it at brother Keith's garage.
It seems it acquired a stand. I may need to leave my tools there more often. 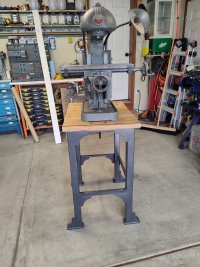 On further review I may need to leave my tools there longer. Keith says he was watching paint dry and got bored.

and a bit more.

The weight on the Zed will take care of that backlash

The entire blog is a good read. Thank You again Mike.
The only difference is Mike used steppers i intend to use servos and close the loop.
With the addition of purpose actuators I'll have the ability to lock all but the working axis for drilling and longer X or Y axis runs. Just a few in/Lbs on the gib locks should be all it takes. I plan on adding pneumatic stays to the Zed to take a bit of weight off that servo.

The seals are the hard part. Here's what I did, starting at the top:

Upper Inner SKF 10111 This was a felt seal sandwiched between the upper bearing race and the housing. The seal rides on the 1" OD bushing that goes under the threaded collar.
The replacement is a lip seal that presses into the top of the casting.
1" shaft x 1.98 bore x .46 thick
National 471744

Upper inner seal. This is a lip seal that rides on the smallest diameter just above the transition to the larger diameter that fits the pulley. I found no seal with the correct OD, so I used one a little larger and hand-ground the OD until it would fit the rough bore. I used a seal that was given me by another member and I was unable to find a seal number on it, but I suspect it was the SKF 7573. This was the most difficult fit. The below are my notes.
SKF 7573 needs mod (National 471567) 1.575" OD
Cast bore 1.525" 11878 oversize OD (National 471354)
TIMken 710154 1.5 OD

Lower inner seal. Original is a metal-clad felt seal sandwiched between the casting and the bearing race. The bore is rough and the horizontal outer surface is not flat.
Cast bore 2.05" x 1.180 shaft
30x52x7 metric seal would work
Nat 223035 is the cross from the SKF
I used a Timken seal which was a loose fit in the bore. I'll come back and add the number when I get back from the shop.

Lower outer seal. This is the biggest diameter seal surrounding the working end. It was the easiest to fit.
SKF 15160 was sourced on ebay and fits perfectly
National 40067S is the crossover number but is not that common

Last but not least is a bit of a Bridge(port) to far.
http://www.dkpercussion.com/blog/un...m-head-rebuild-for-the-benchmaster-mill-pt-1/
These are not all that uncommon and known as either Bridge-Master or Bench-Ports.
Seems like a fair bit of work for 3 1/2" quill travel. Bridgeport did make a few "H" heads on the "M" pattern. "H" for high speed, up to 12K rpm!

I've been using EP140 gear oil in the bearings of the mill/drill. (oilcan pumping it through the Morse taper drift slot) Picked up an extra 50rpm at max speed and flushed out a lot of crap I didn't know was in there. Watched a You Tube video of mill/drill being reconditioned and apparently they all have rust in spindle so I will have to replace bits sooner rather than later but $5,600 for new AC unit comes first (too damn hot here already, 95+ with high humidity)

I hear ya, crazypj! Woke to 60 degrees outside and opened all the doors to cool as much as it can before we head to church this morning. Our AC started struggling about a week ago, and gave up on Wednesday with compressor running but no cooling. Our HVAC people are supposed to come Monday (they're swamped, of course) to hopefully just recharge (R22). And, the truck transmission went out Friday! Forecast here is 100F for Wednesday.

Golden spectro https://spectro-oils.com/motorcycle-hypoid-gear-lubricant/
@crazypj Did Jaxson bury the phone out back again ? ;-)

DTT BOTM WINNER
I would love to have one of these myself.

I'm in Seattle, I have family (brother from another mother, veteran computer hacker) in Imperial Beach CA. The Mill was in San Diego (east county) .

The seller was , well...
In a forum I expressed interest before it was actually for sale. When it did come up for sale I got a message that it was available. I was a bit floored as it had been months. When I found out I was getting Horizontal AND vertical for the price I was a bit stunned. I was also nearly broke and would be for at least a month.

Then I was on the phone with the seller for all of three minutes and knew that sight unseen this was the machine I wanted. Purchasing online, sight unseen can be a disaster or a godsend. This was everything as advertised and full disclosure.
This phone number remains in my phone to this day.

I don't have the pics anymore but I did see several that weren't worth parting out. I won't go down the list but the worst , you couldn't have saved the column, knee, or table castings. The table was painted and for good reason. "T" nuts had been pulled out of slots in five places , with evidence of a screw bottoming in each one, then bondo'd and painted over! Broken dovetails everywhere, botched weld repairs, and a piece of all thread for a lead screw. --"They're rare set up like this one. I'm doing you a favor letting it go for what I've got in it" -- $6K meh

Best i can tell you is be ready at a moment's notice. Have the cash and transport ready to go. Irk, you and I have folks if not family all over the country. Fastenal Blue-Lane is your friend even if they don't go east west much. Know what you're getting into. It's a bunch of MT2 tooling in a restricted Zed axis , without a quil, and no spare parts. At best MT2 collets in the spindle will give you around 8". Fortunate that "standard bearings" can be found at Autozone and better bearings , well , use your imagination and credit card.

It really isn't that big a step up (or sideways) for something like a "Millrite MV-1" or the Atlas Clausing small mills. Even the "M" head Bridgeport isn't a huge footprint. The early Enco is another option. Groton made a smaller mill but it seems rare. Lagun as well made a small footprint model. One last mention for the Deckel machines, http://www.lathes.co.uk/deckel/#google_vignette
I've narrowly missed two that were affordable. One went to a very good home. I rigged it out of a basement and crated it for shipping. I made nearly enough from the rigging job to pay for it ;-) It went to a prototype/design shop and a good friend. The other is in the hands of a gun-tuber as I was moving, broke, no room, and couldn't find even $1,200 for an FP2 . Again I paid for the rigging and crating. Take a good look at Tony's site. If a Deckel shows up for under $5K with fixtures, attachments and tooling , go to the bank and get it done. It will be your first and last mill. You won't need another.

DTT SUPPORTER
DTT BOTM WINNER
Im following along on this one too. I recently bought a Bridgeport Boss 8 that i will be retrofitting with Centroid controls. I have never done anything like this before and I have no clue what i am doing but your project will give me motivation to get it done. 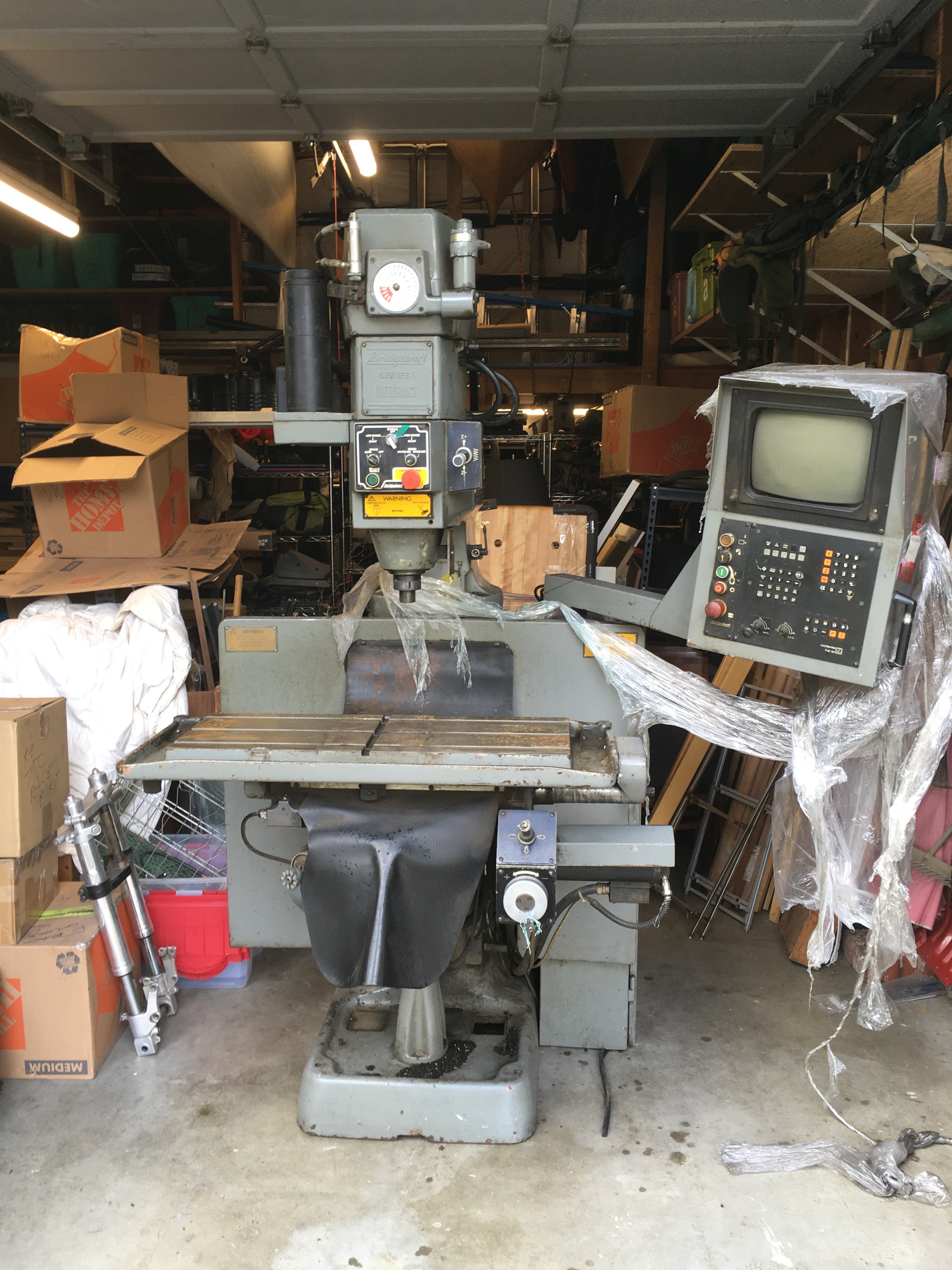 doc_rot said:
Im following along on this one too. I recently bought a Bridgeport Boss 8 that i will be retrofitting with Centroid controls. I have never done anything like this before and I have no clue what i am doing but your project will give me motivation to get it done.

Very cool! I'm not sure of the cost difference or if there is an option, but I'd recommend looking into a prototrak conversion vs a centroid. I've programed and operated both as part of my last day job, and the trak system takes the cake on conversational programming hands down any day.

I got the mill trammed in. (not much to do it was very close) and made the usual minor adjustments. I started it up and there were a few odd noises and ...

Just how warm are these bearings supposed to get? Just a few minutes and I couldn't leave my hand on the top of the spindle. I'm getting some heat off the bottom bearing but the top bearing gets positively hot.

I'm no stranger to proper bearing preload. Am I missing something here? Is there a one lube to rule them all?
I had dial indicators on the top and bottom of the spindle. I counted down from .002" , .001" , .000-something then barely 15 degrees on the preload collar. Heat, and lots of it.

These are very common automotive bearings.

I need to find another mill to make the modification to the saddle or find another saddle and do it myself.
Click to expand...

Not quite, lost the battery cover months ago and spends way too much time watching You Tube video's
. I had no idea what FNAF was until he insisted Nana got him a graphic novel.
He's still not reading which is probably a good thing as it's a horror story/series about animatronics, AI and possibly
ghosts?
You must log in or register to reply here.
Share:
Facebook Twitter Reddit Pinterest Tumblr WhatsApp Email Share Link