Another one of them Viragos

So I I figured it was time for me to start a build thread. Virago's being all the craze these days I couldn't help but try my hand at one when I found a nice deal on a '81 XV920R chain drive. Might as well be taken from different pages of the same cookbook I know (Benelli tank, motolana seat, spoke wheels).

The fun part is the R6 forks with spoke wheels, r1 rear shock. At some point I plan on getting some sumo rims to lace to my hubs, but the wheels I got fit the tires already on it so for now I'm sticking with them.

The day I got her. Bought it from the coolest old dude that lived out in the boonies. Of course it was labeled "Beast"... 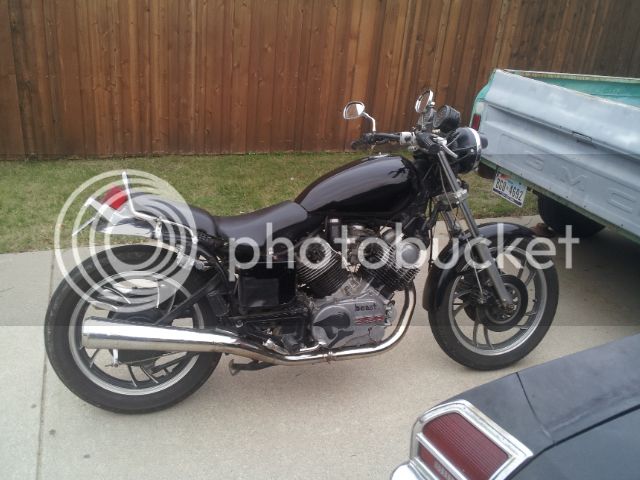 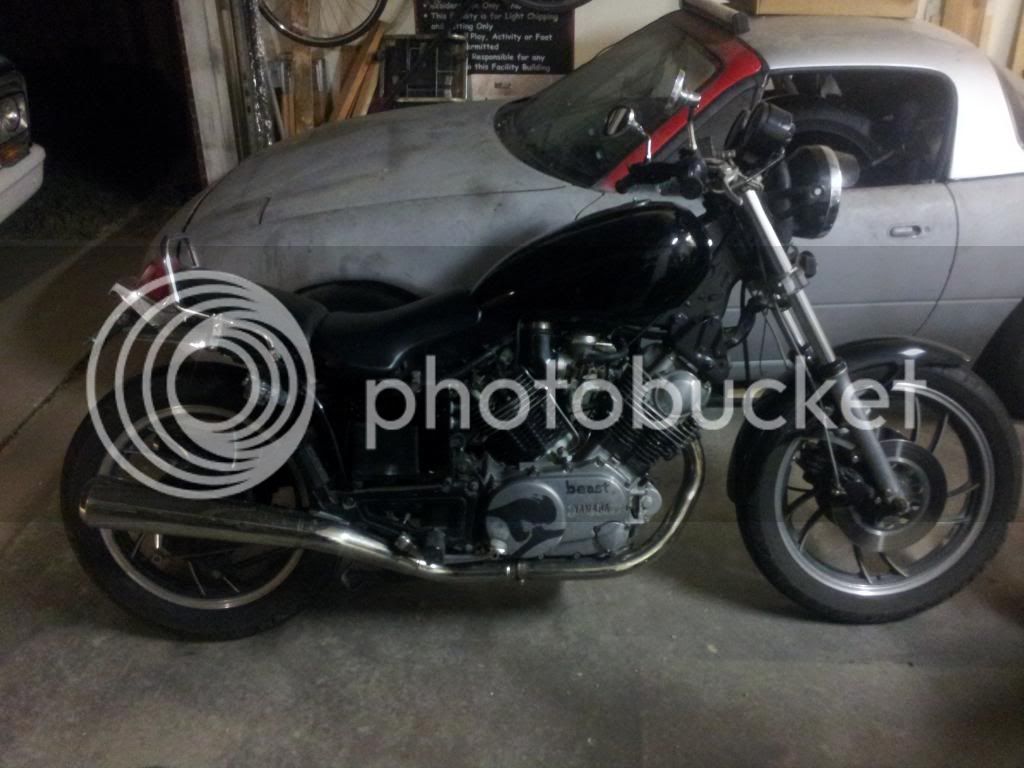 My now ever growing collection... 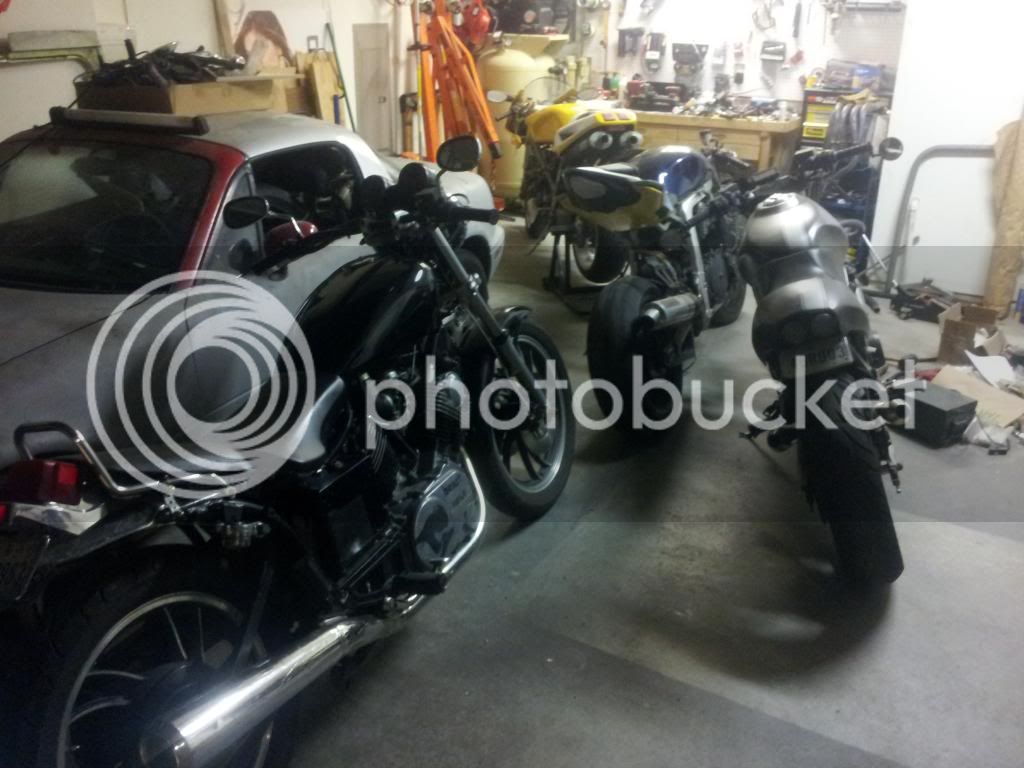 Started to strip the her down. 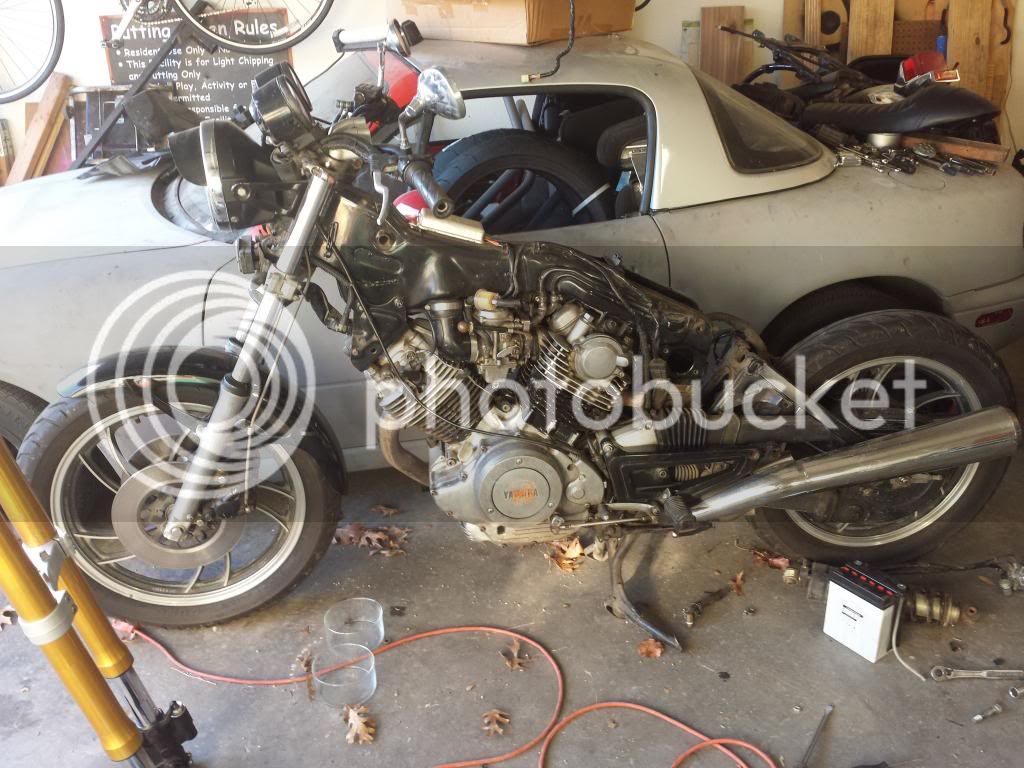 Got a pair of stem bearings from AllBalls and pressed out the stem from my 07 R6 forks I scored cheap on craigslist, turned it down 1mm, and stuck them on. 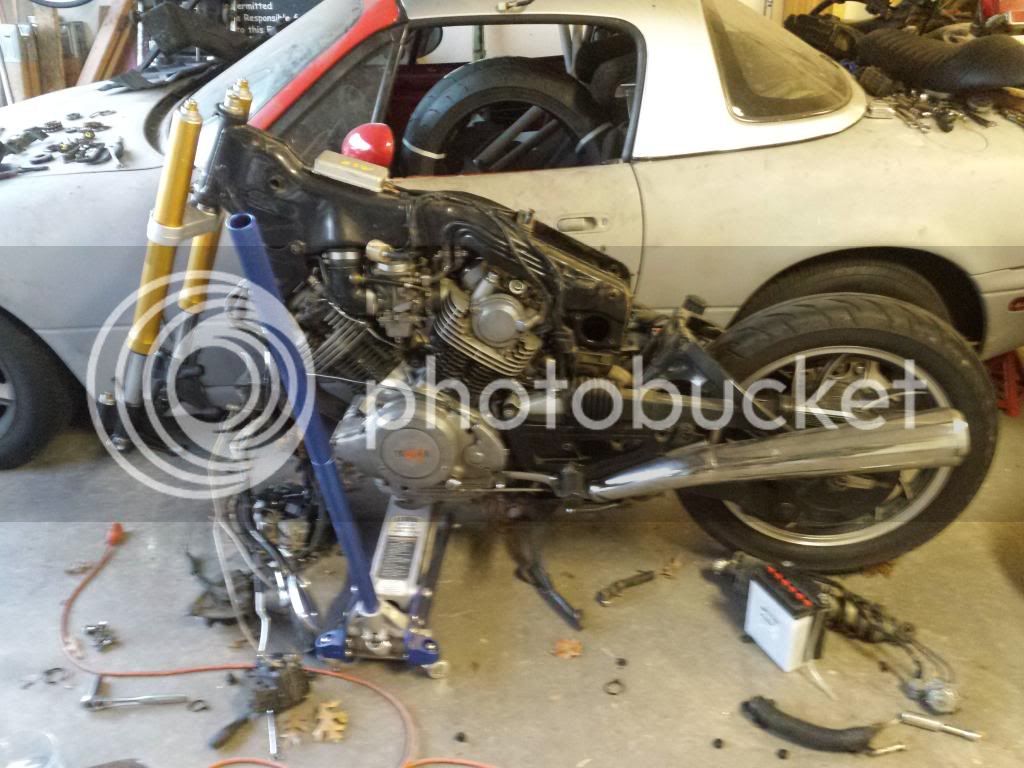 For wheels I bought a set off a TX500 which the front hub is as far as I can tell the same as a xs650 (for a heck of a lot less money on ebay). I'm going with a single floating disk off a Ducati 748S. The center bore and bolt holes are perfect (idk why), but the rotor spacing is completely wrong so I turned a hubcentric spacer: 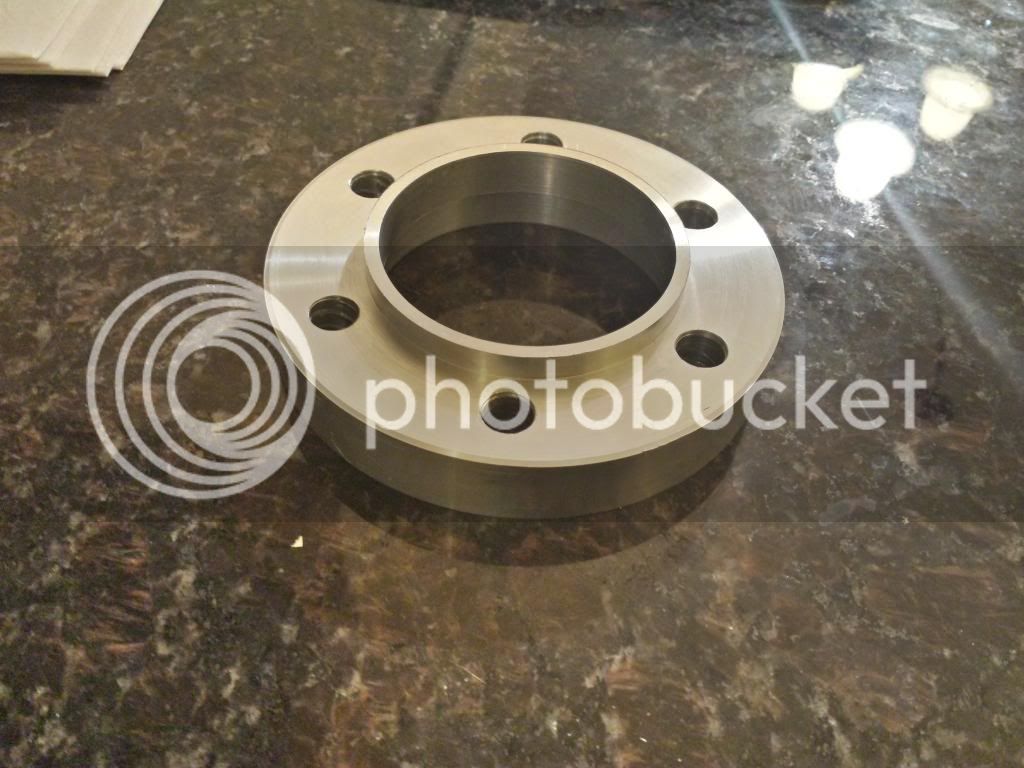 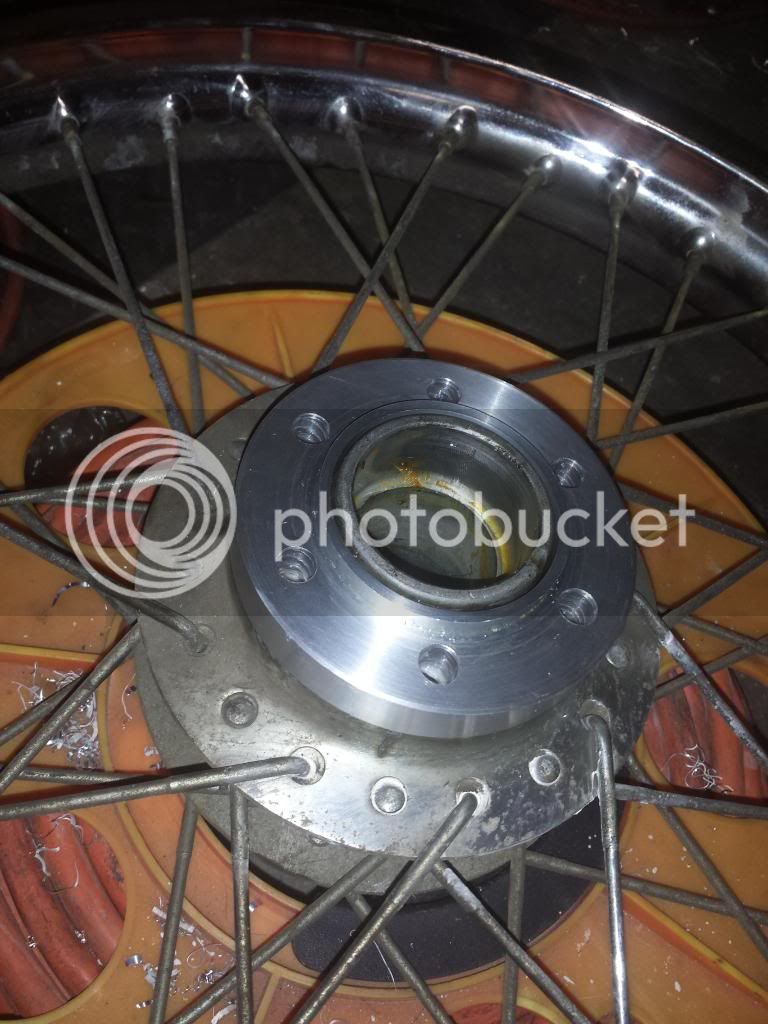 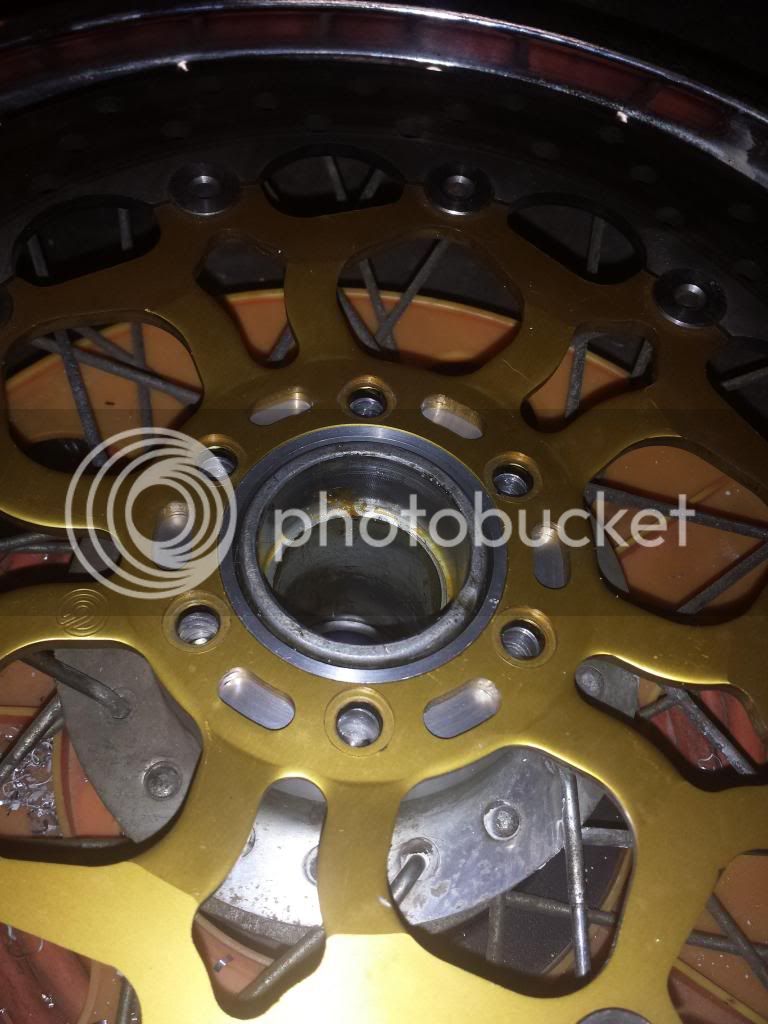 Also turned a couple bearing spacers to align the wheel in the forks. 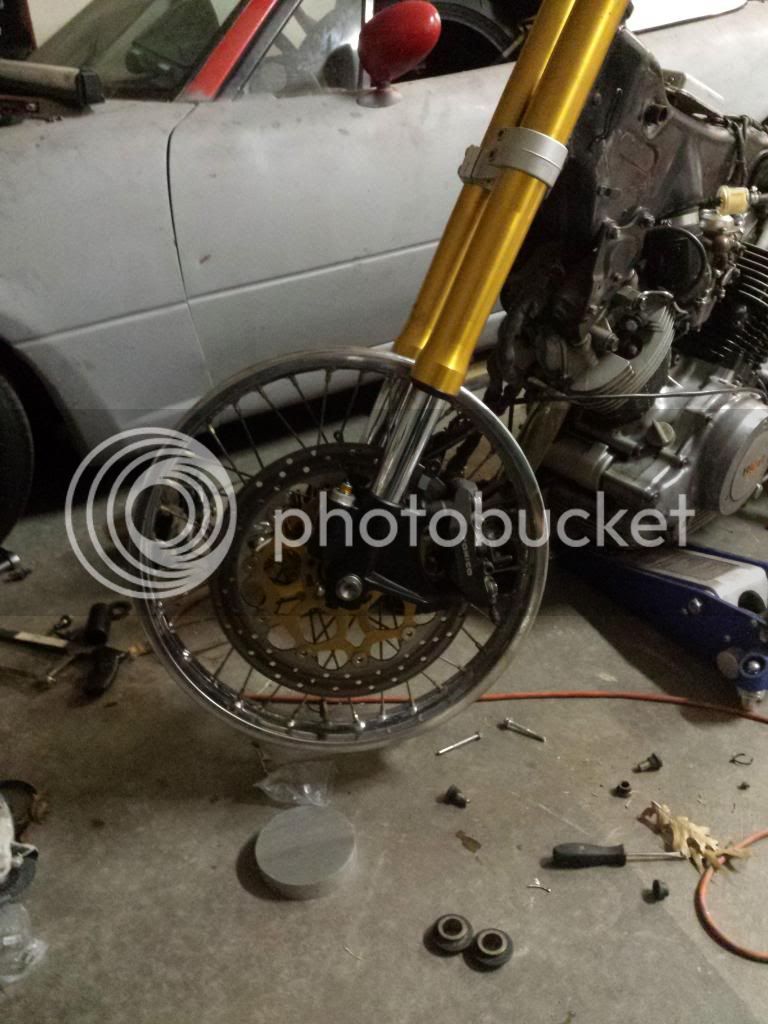 Started mocking up the rear R1 shock (which should be about right on the spring rate). Also threw the Benelli tank on there for good measure. Caliper is off a GSXR. I'll probably put a R6 caliper on it at some point, but I'll have to make some spacers to get one to fit. Since the r6 has 310mm rotors, the gsxr has 320 (like the Ducati) and the calipers otherwise bolt into place. I have r6 calipers on my gsxr forks on another bike, but it took some spacers to make it work. Yes I know the caliper is for the wrong side, just mocking it up. 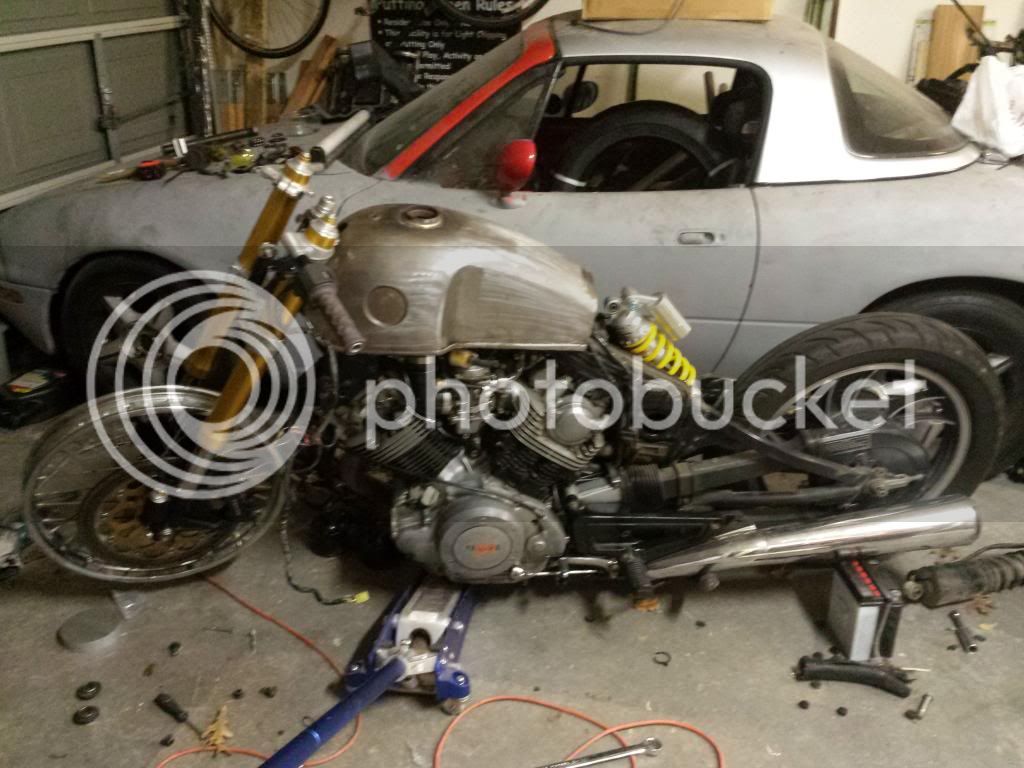 And a crappy seat mockup. 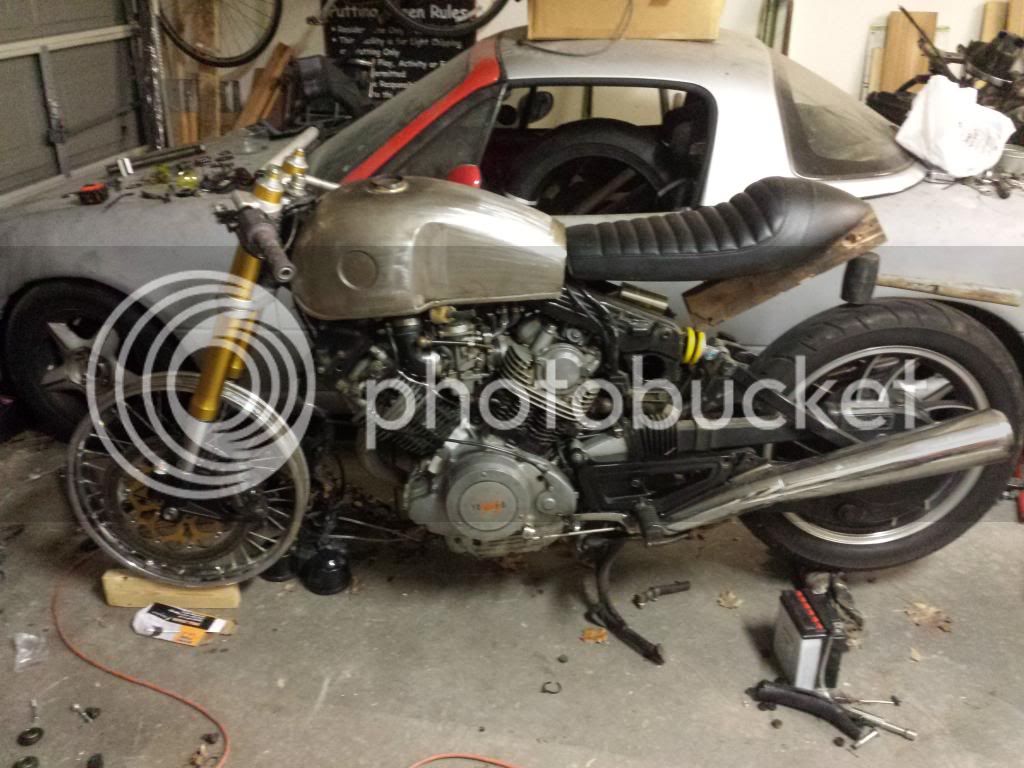 Got the front tire swapped from the swirly mag onto the spoke wheel. 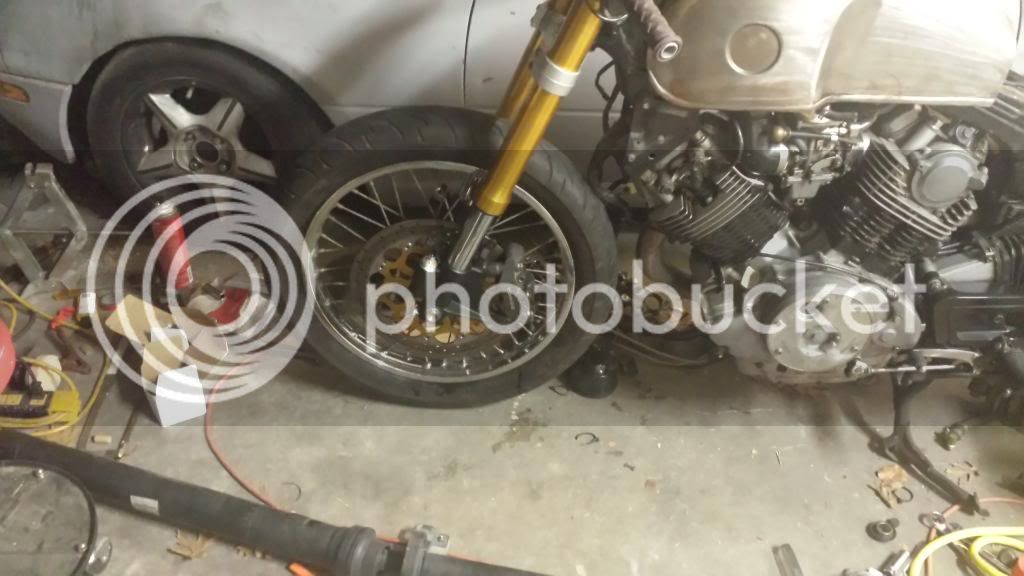 mocking up the rear wheel 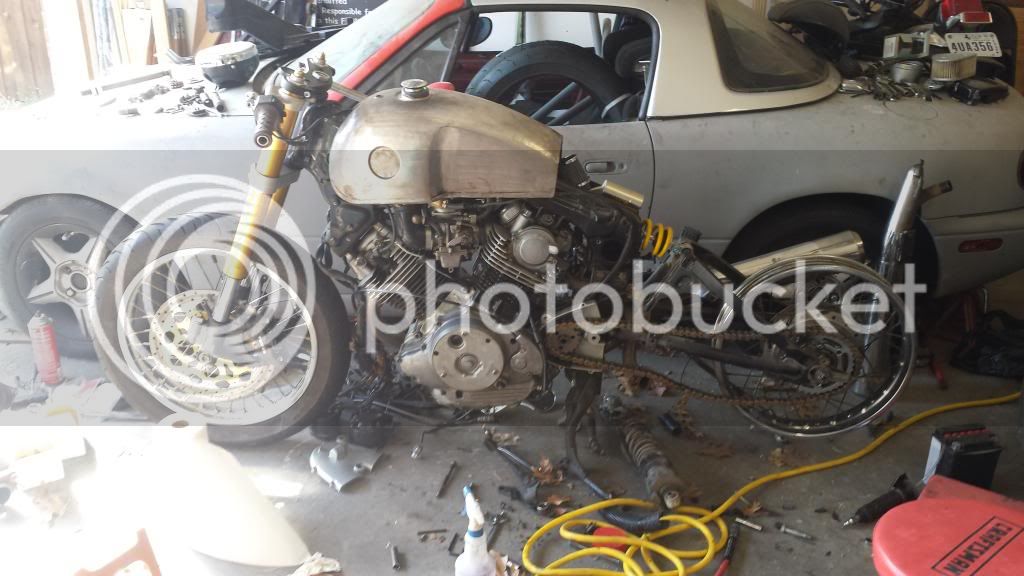 How I'm mounting the shock. I'm going to gusset this more, but for now I just have the mount tacked into place. 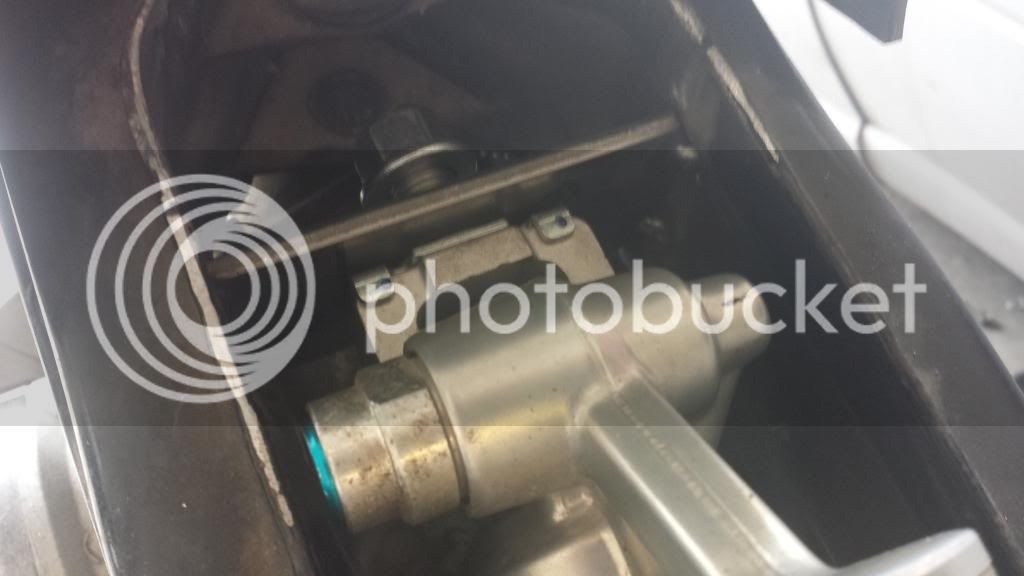 Finally got her sitting on her own suspension 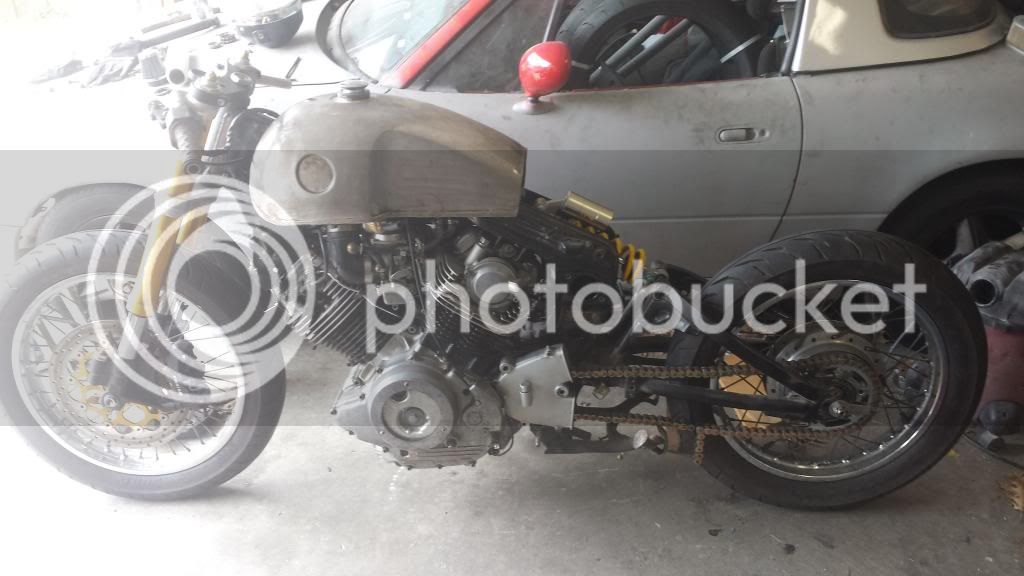 Once I had the bike sitting at the stance I wanted, I could plan my tank and seat angles. 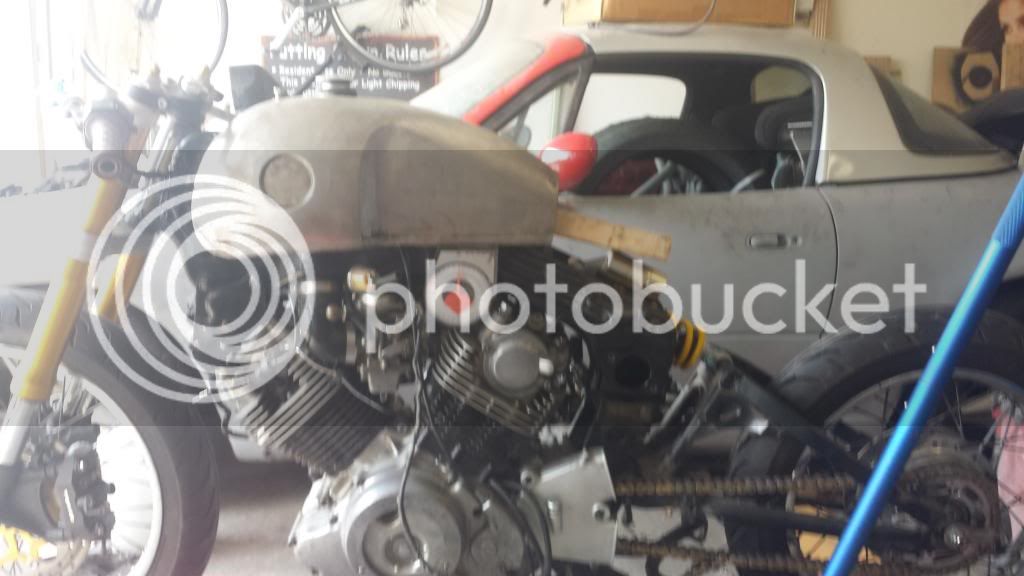 Front tank mount was easy. I actually have it mounted with 2 more gussets to the rear not pictured. It's probably overkill, but it's solid. 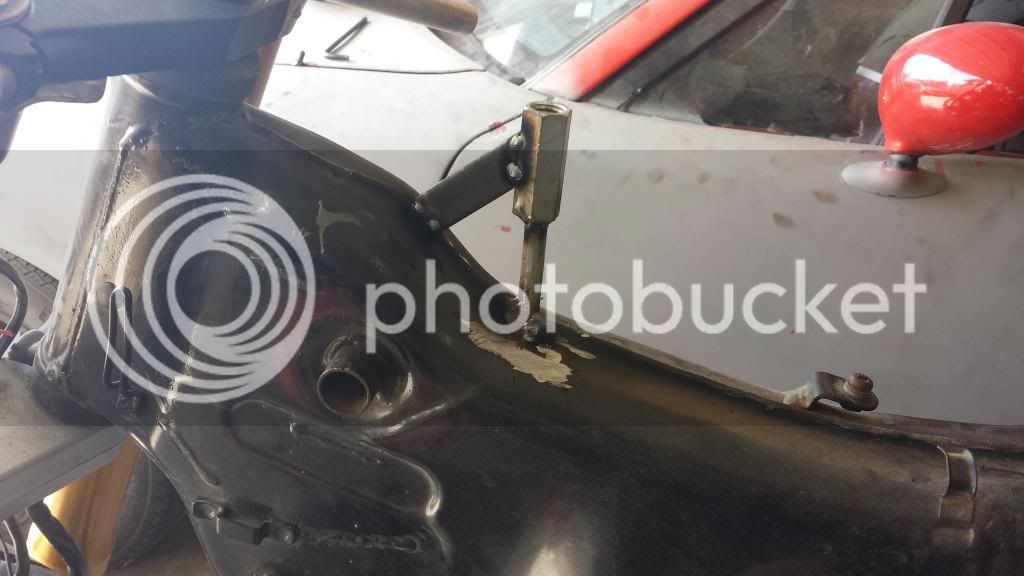 Subframe started to get the seat on it. I need to take some more pictures of the subframe, but you get the idea. I also chopped the frame. The rear of the tank is sitting lower than it will since I don't have the rear tank mount completely done. 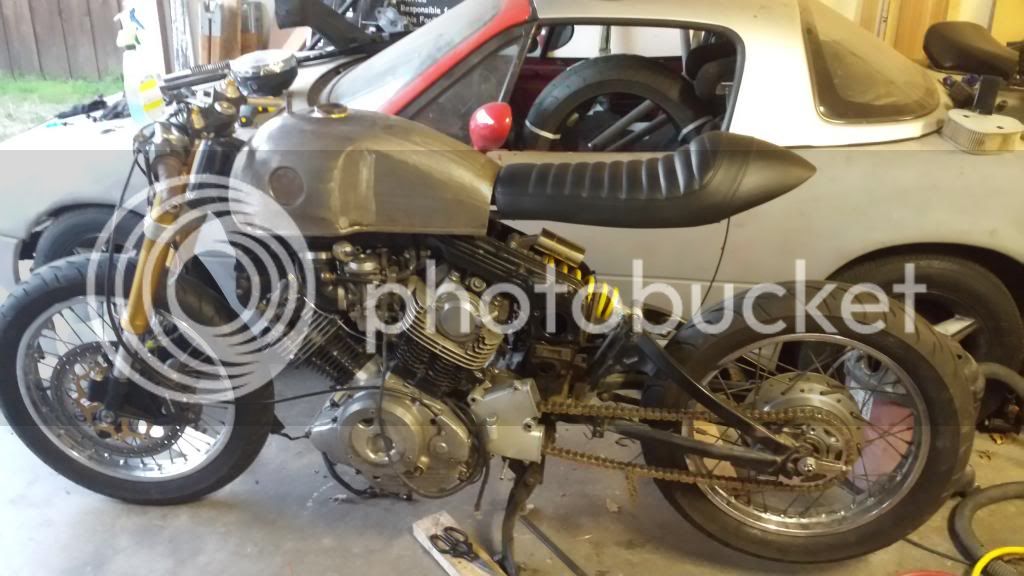 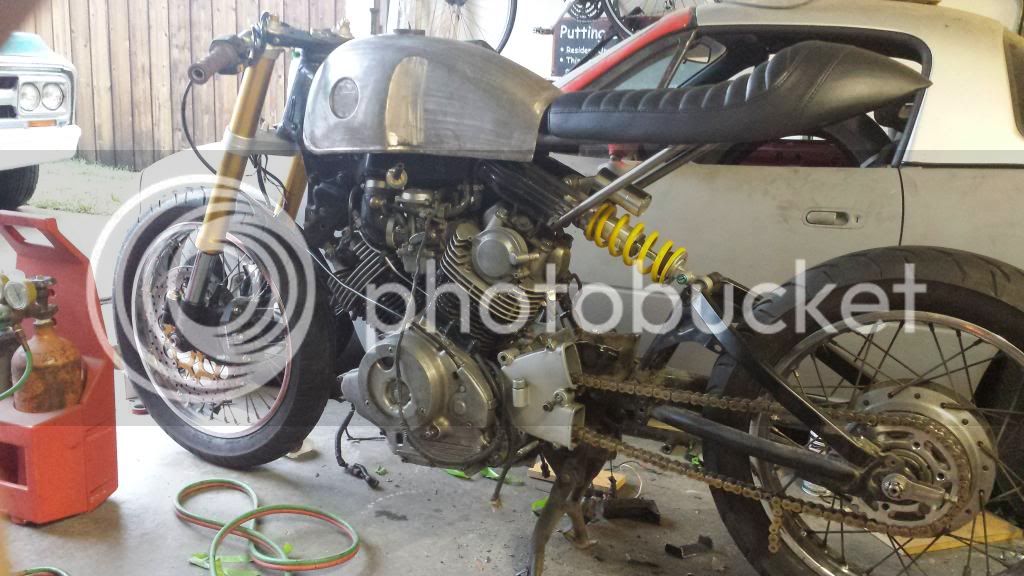 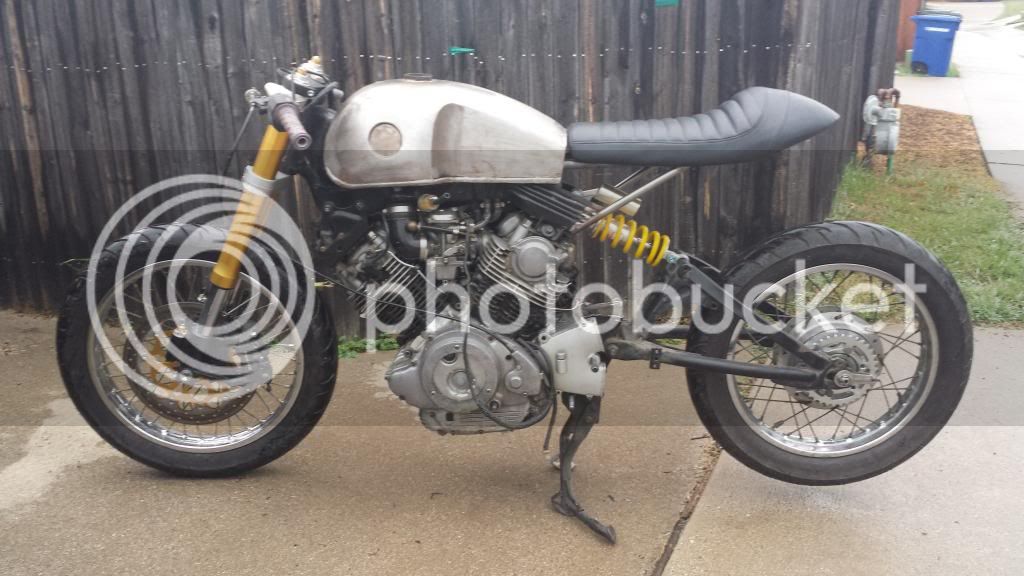 So the next plans are:
Mount Ballistic battery under the seat
Finish welding the frame up. Also planning on chopping off the center stand and mounts to clean up the clutter underneath.
build some rearsets
lathe a rear sprocket spacer since the alignment isn't where I want it.
come up with a 2 into 1 stainless exhaust
weld in a harley style gas cap bung to mount a flush gas cap as well as some other sheet metal mods to the tank to make it fit the bike a little better. I've been contemplating changing the tunnel of the tank to give it more fuel capacity.
headlight
wiring
Brakes. I ordered a Brembo brake master off of a KTM dirtbike that is a 11mm bore that should be just about right with the single R6 caliper. 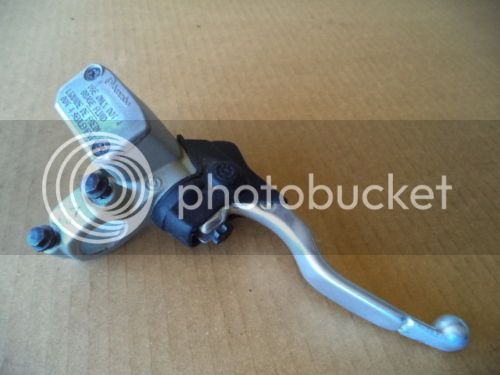 Tons of paint/powder and finishing work

what wiil you use to replace the frame you cut out ?

Yeah, there has to be at least a dozen I've seen (didn't know this when I got the thing). But then again how many CB's are there lol.

I'm not planning to tie the frame together, I'm chopping the frame similarly to how Sepp Koch has been doing it for a few years. Some people have arguments both ways on weather that's a wise decision but the damage is done and I like the look. if it proves to be unstable I'll tie it back together somehow.

One challenge with that is running wiring from the starter and crankcase up to the under-seat area.

The air filter I plan on running in front of the tank on the left side. I'll try to take some pictures of where I mean. I don't want to run single pods on the carbs since it's so hard to tune these things in the first place. Running a HD cv carb would be cool, but I've heard it suffers on the top end. Wonder if anyone's used something like SV650 carbs.
X

it is a great looking bike
what you are doing is putting 100% of all the suspension loading, front and rear , thru the engine castings
they were never designed for anywhere near all those loads a certain % yes but not 100%
it all depends I am sure on whether you ride hard and put on a lot of miles
it will definitely flex more which usually adversely effects handling
if you do a lot of miles and on rougher roads eventually it mayfail in an ugly manner
think about twisting a piece of steel bailing wire until it breaks takes quite a while
well aluminum castings are way way worse in huge way when it comes to that type of failure from flexing
in the meantime be prepared for oil/head gasket leaks as the constantly varying loads will be shifting the engine at its joints
good luck

Do not worry about the frame which you cut out, NO problem at all, look up the German(also in english) site www.TR1.de and you will see that there are dozens of racing XV1000/TR1/XV920 which have a frame like you did.

Experience is the best whitness in these cases

Hope you will get on with this beauty 8)
R

How is this build coming along, it has been since May that the builder posted. I hope thate have been no insurmountable problems?

I agree that the Koch bikes (and others) have proven the validity of leaving the frame open at the rear. How are you going to mount the rear-sets?

Sorry for not updating. I have made some progress, but it's been slow going because of some other projects that fell in my lap (5.3 LS engine swap into my 71 GMC, Spec Miata build).

I have got the front brakes plumbed with the Brembo master, braided line, R6 caliper. I've been working on turning a rear sprocket spacer, it's a big chunk of aluminum so it's taken some time (started with a 6" x 1" billet). Also got my electronics and controls on the bike but not wired. Most comes from late model R6 stuff.

The rearsets are the big unknown as far as how I want to build them. I have my Tarozzi pegs ready and waiting, just can't think of the best way to hang them. Probably use some small diameter tubing or steel rod in an "A" shape. The stock brackets were pretty ugly and xv750 brackets don't fit on chain drive bikes (or at least not easily.. I do like how those look and actually bought some thinking I could make them work).

Once I get the rearsets done and weld in the air filter mount (will be up by the coil packs) I'll pull the engine off the frame, final weld the frame and get it (and a bunch of other stuff) powder coated. I'd probably also like to figure out a steering damper, probably a gsxr unit. Also need to do some sheet metal work to the tank to fill in the gap next to the steering head between the frame and tank and weld the bung for the harley flush gas cap.

So what do you guys think; should I go with a low slung exhaust that kicks up under the rearsets or with a tracker style high exhaust? I think a high exhaust would look awesome but I worry about it being hot on the legs, I've never ridden anything like that before.

I'm about to start working on the pipes this weekend, I got a bunch of stainless tubing and bends with a cone engineering muffler in the mail this week.
W

If I were you......tracker style, the always heavy looking engine looks a bit lighter then..
R

I believe either high or lw could look good. Personally I would follow the lead of the real racers on the Koch web site. Although they are after performance not appearance, they still look "right".

Oh yeah, I owe a large amount of my ideas to Sepp's website. I know a lot of his are either a higher mount exhaust or high duals.

If I did a high exhaust it'd be a combination of something like this (from tr1.de): And this(from Down and Out Cafe Racers):

Both of the above high pipe solutions are excellent, look to be nearly eaqual length. The one problem with them is that they will get hot, a shield like dirt bikes have or the insulted wraps might do the trick. Not much of a problem for a racer who will be covered head to foot, but if you want to risk riding in shorts that could get down right toasty.

rundown said:
Both of the above high pipe solutions are excellent, look to be nearly eaqual length. The one problem with them is that they will get hot, a shield like dirt bikes have or the insulted wraps might do the trick. Not much of a problem for a racer who will be covered head to foot, but if you want to risk riding in shorts that could get down right toasty.
Click to expand...