DTT SUPPORTER
DTT BOTM WINNER
I was debating on posting a thread up here, but eh why not. About a month and a half ago I was on the way home from fishing when this 1976 Beemer caught my eye. It was sitting back off the road in a guys driveway with a barely noticeable for sale sign on the back saddlebag. (Perhaps that on top of the fact that the guy never advertised it is the reason he said he had a hard time selling it). The guy who had it was an older gentleman that had been riding airheads since the early 60's, and this was one of 4 he had in his stable, including one really well done /5 with a Volkswagen air cooled lump in it.

Anyways picked this one up for a reasonable price, with around 82k miles on the ticker and trimmed in full 70's touring garb. Lufmeister fairing, complete with vetter cyclesound radio (with cassette) wixom hard bags, crash bars with highway pegs, and a luggage rack hanging way out back, with all the glass painted and striped to match.

I had been wanting a vintage airhead for a while. My good riding buddy Al used to put alot of miles on along side me on his r75 and I wanted one ever since.

As i brought it home. 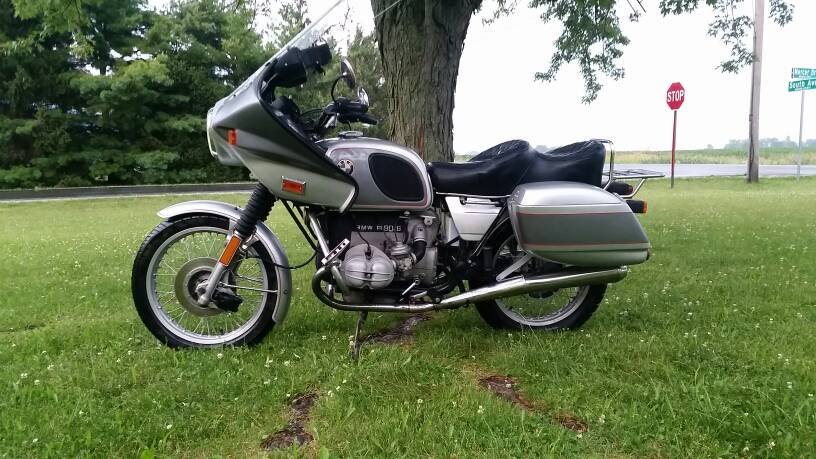 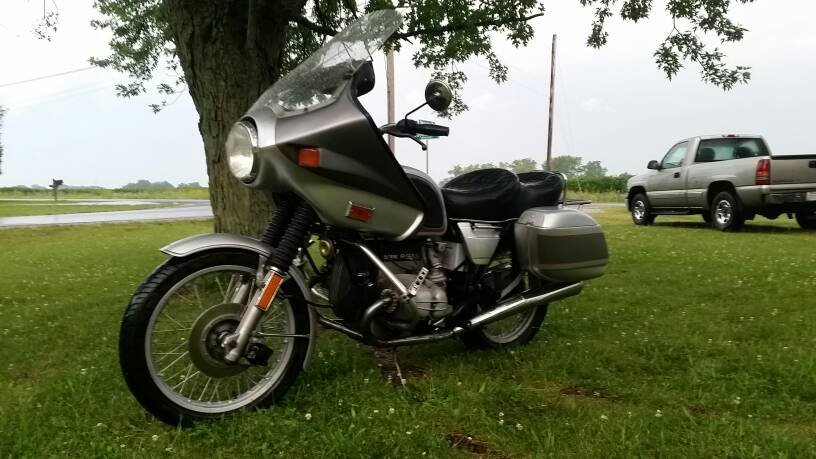 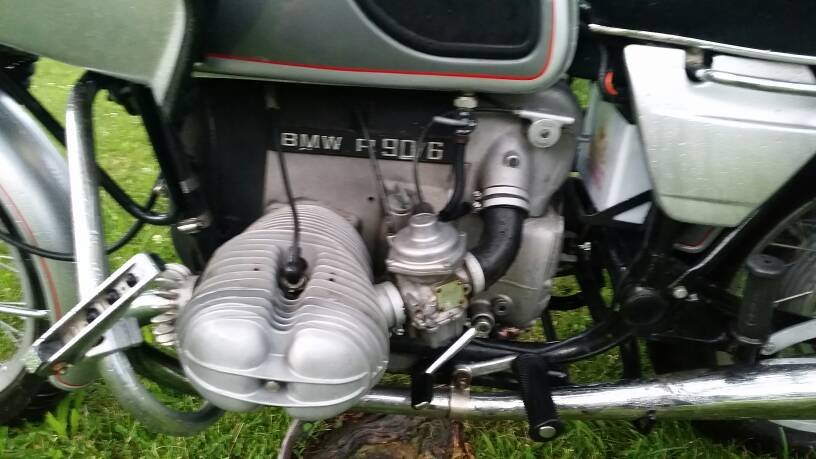 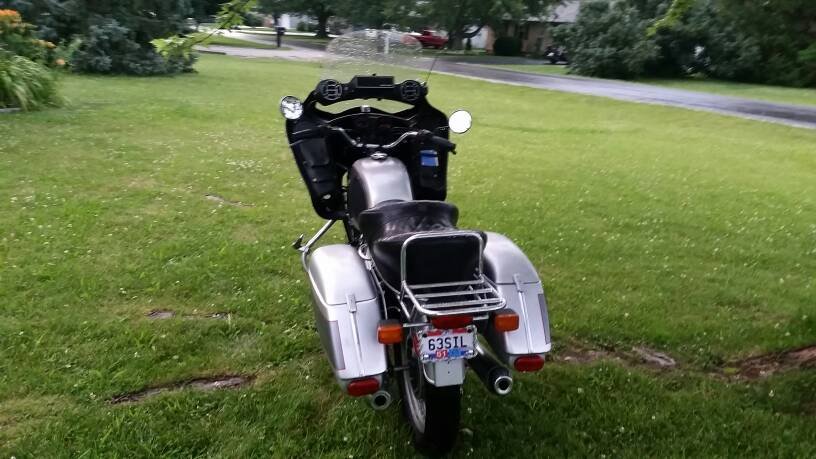 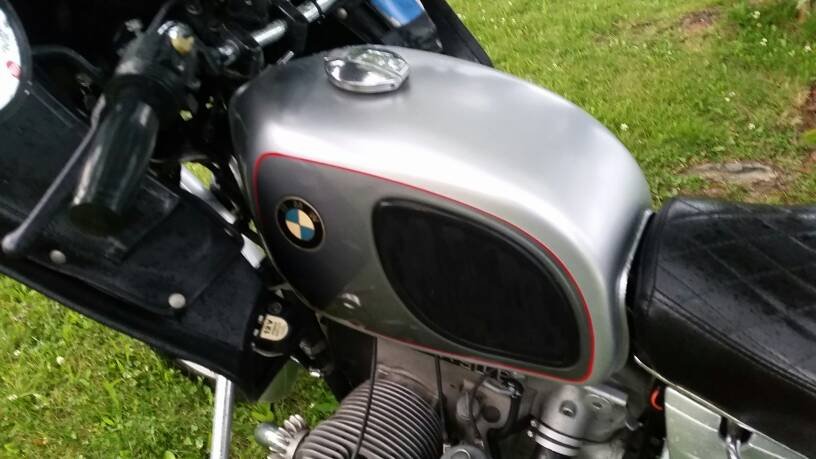 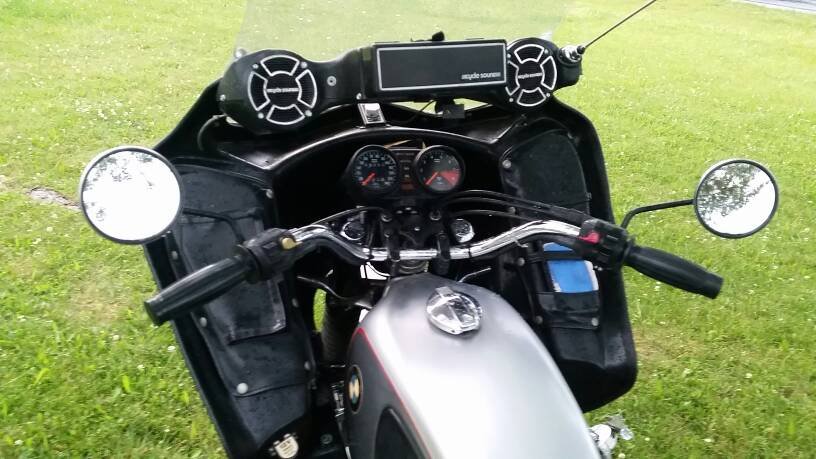 DTT SUPPORTER
DTT BOTM WINNER
I am not doing anything crazy custom on this bike, but doing a bit of maintenance and losing at least some of the 70's flair (read losing the kind queen and lufmeister fairing). I'd like to put some miles on this thing and have it respectable enough for a vintage bike night or meet up. It has been repainted, and the job wasn't done perfectly, but its better than I can do myself or pay someone else to do, so it will stay, along with the hard bags and crash bars. Luckily for me, the fairing used the factory bmw headlight and turn signals, so it was a fairly straight forward removal and I don't have to spend much $$ on expensive bmw parts. Just pulling it off made the bike so much better looking imho. I also picked up a plexifairing3 for $5 at mid Ohio so I'll have some wind protection without the outdated look and it weighs about a metric ton less to boot. It will need some scratches sanded and polished out, but I can handle that. 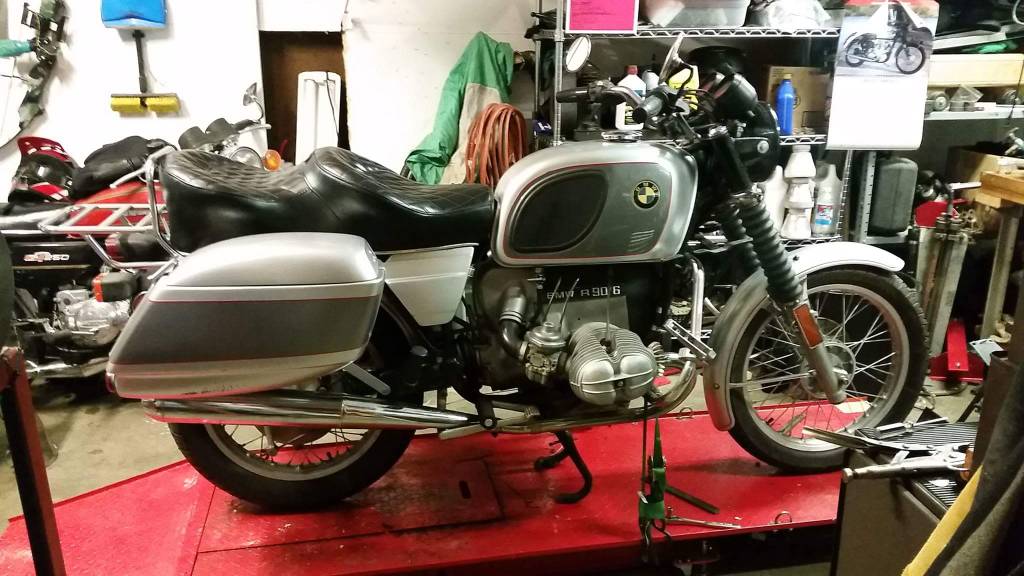 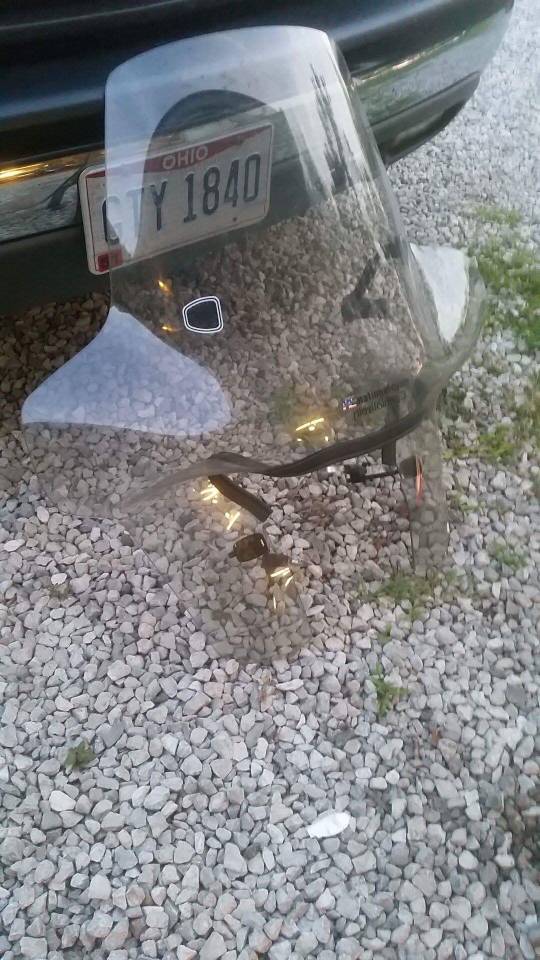 DTT SUPPORTER
DTT BOTM WINNER
next up is that king queen seat. It's comfy, but it sets me a little far forward, and looks like a dumpster fire, so I'm going to try to make some bracketry to fit a Harley police solo seat. Luckily, I don't think it says Harley on it anywhere, so I should be good my wife doesn't care to ride, so I'm going to ridesolo. See what I did there Cory.. ill also likely make up a nice luggage rack to sit behind the solo seat and above the rear fender to take up that space. 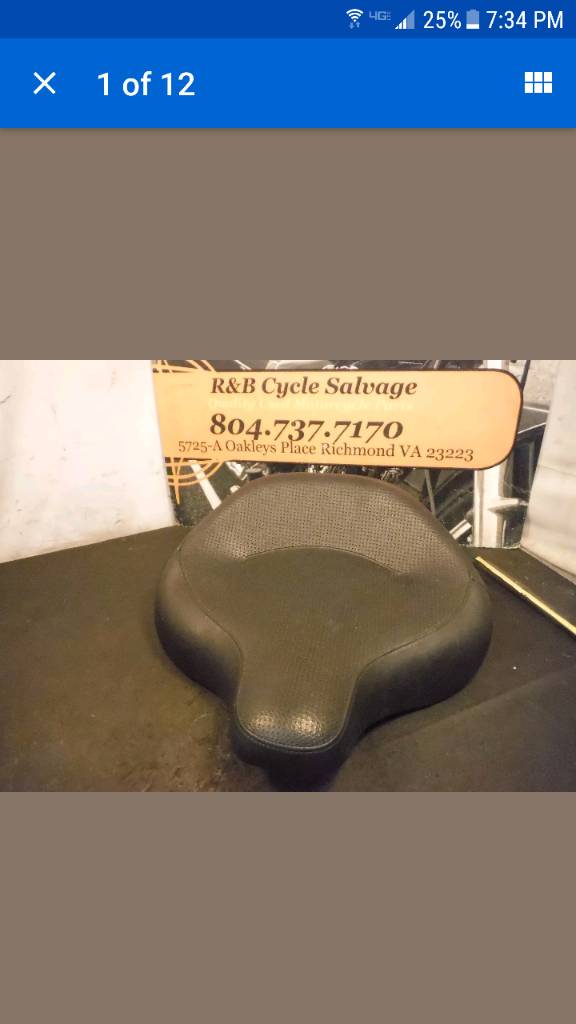 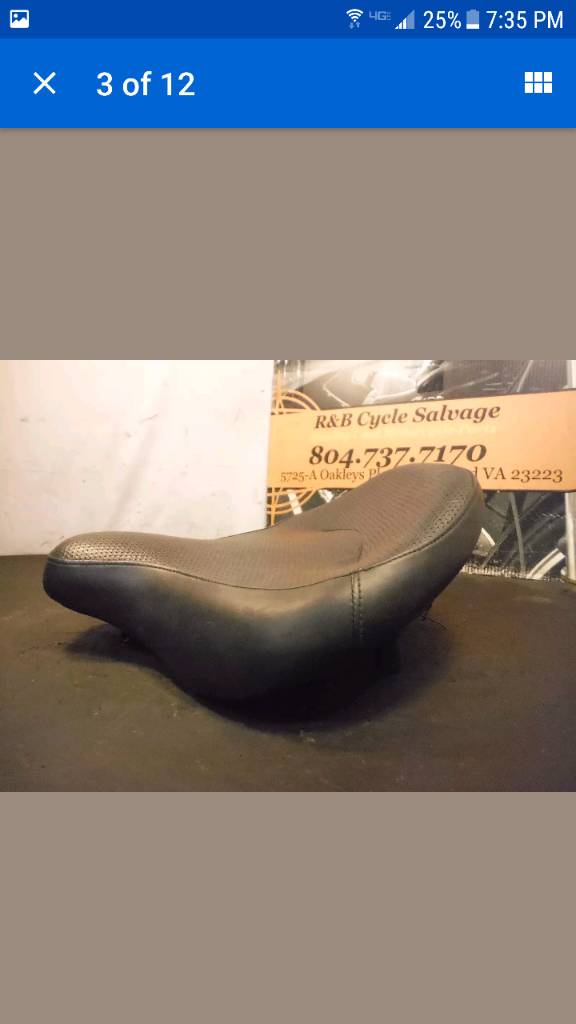 DTT SUPPORTER
DTT BOTM WINNER
I rebuilt the Bing carburetors as it was only running on one cylinder at idle. I could have gotten away with a clean up and o rings, but I figured I'd better do it right so a couple kits from bing were ordered. Left hand pilot was completely clogged.

All cleaned up and rebuild with a little polishing on the caps. 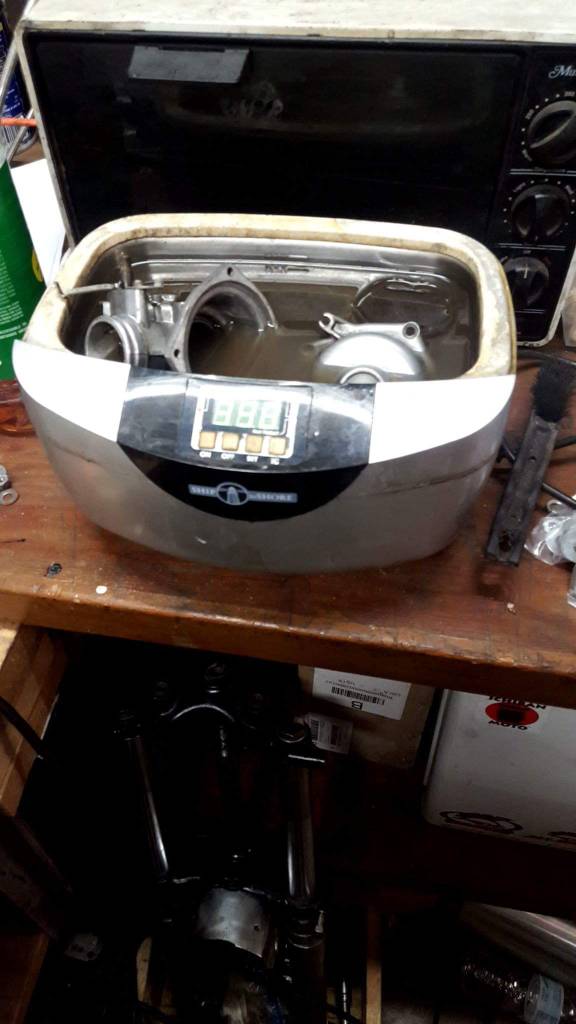 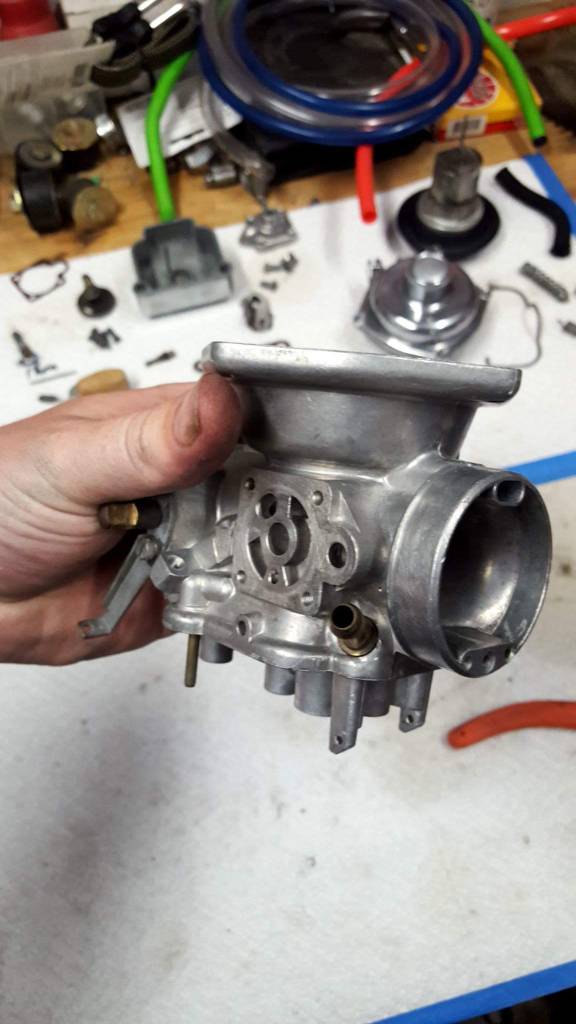 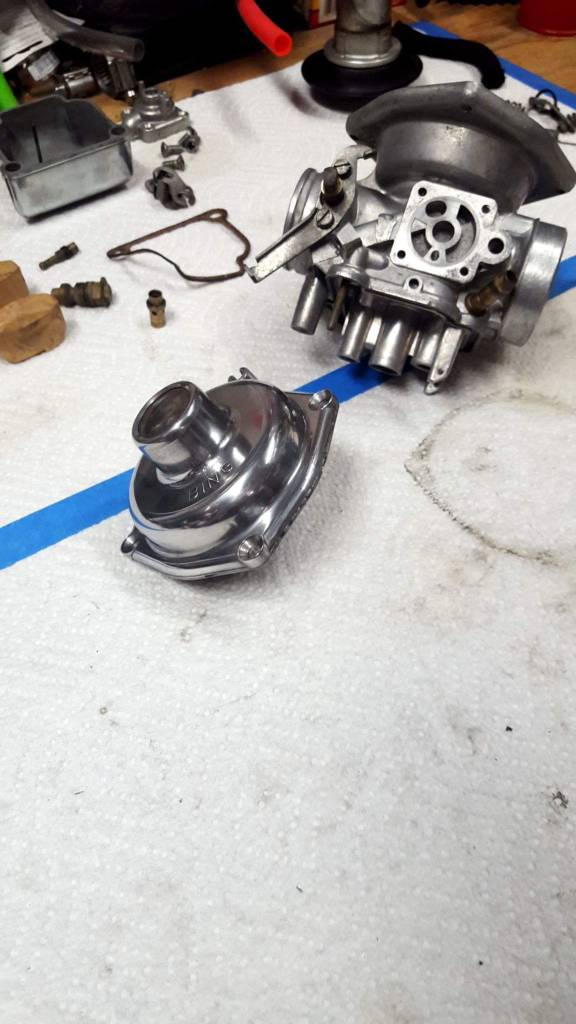 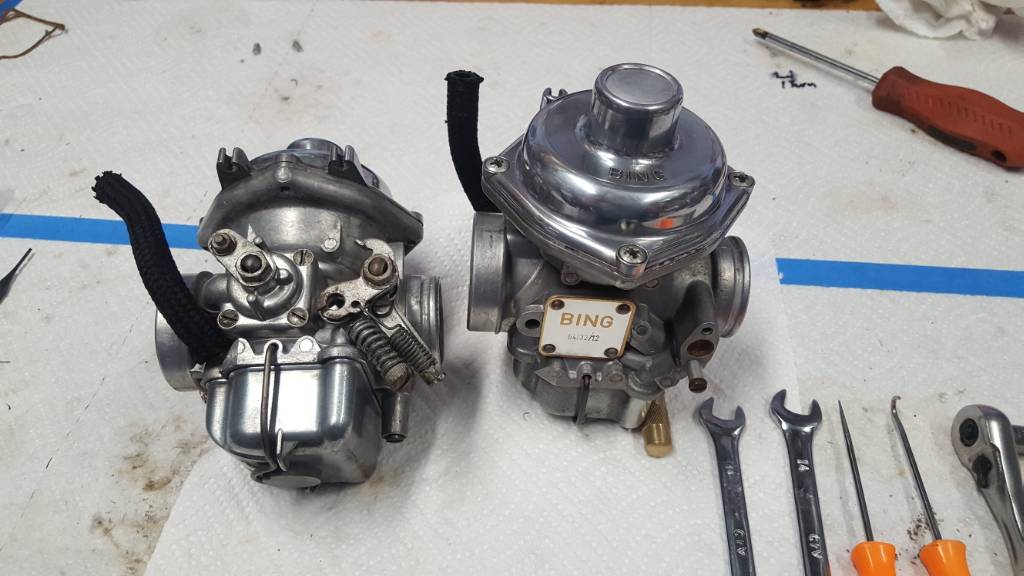 DTT SUPPORTER
DTT BOTM WINNER
The top end has to come off as the push rod seals are dried up and cracked. Hit my first snag when removing the right hand side exhaust nut. Every bit of bmw airhead maintenance literature I've read says (usually in bold) to make sure to copper anti seize the exhaust nut. Evidently one of the p.o.'s didn't get the memo. The left hand side came loose no problem, but the right hand side had no such luck. On kanticoys advice, I just went ahead and cut the nut. The threads will clean up to usable with a little work with a thread file. That probably wouldn't have been the case had I forced it off and I'd likely be looking for a new head. I think ill get by for a while with just a hone to break the glaze and put it back together. I've got 140 cold psi compression on each side. 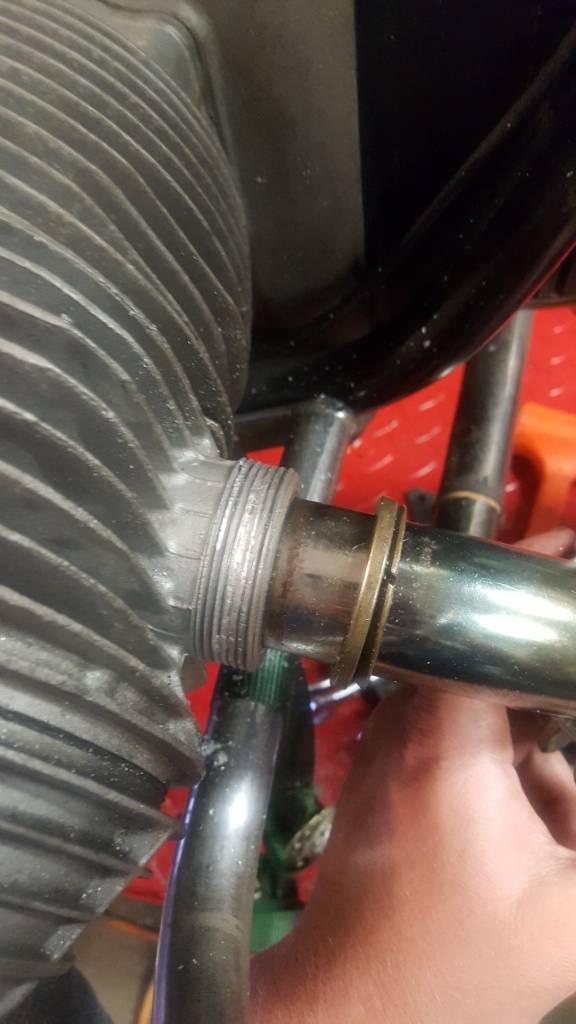 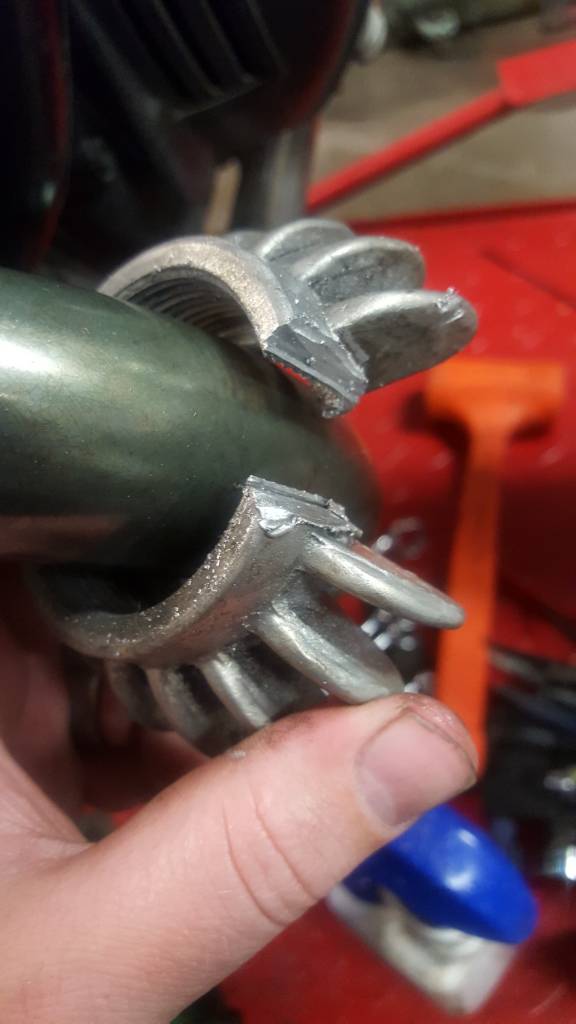 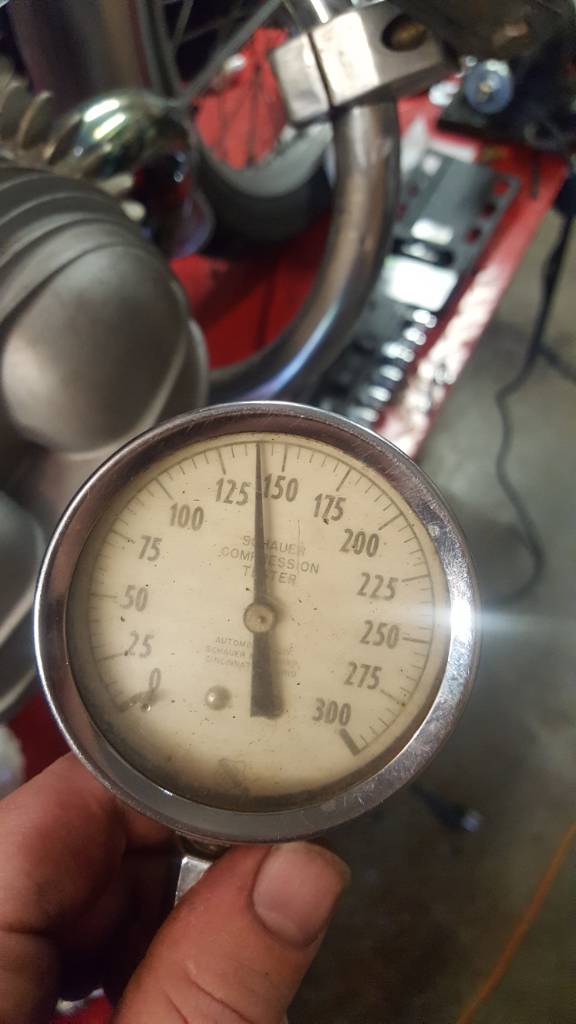 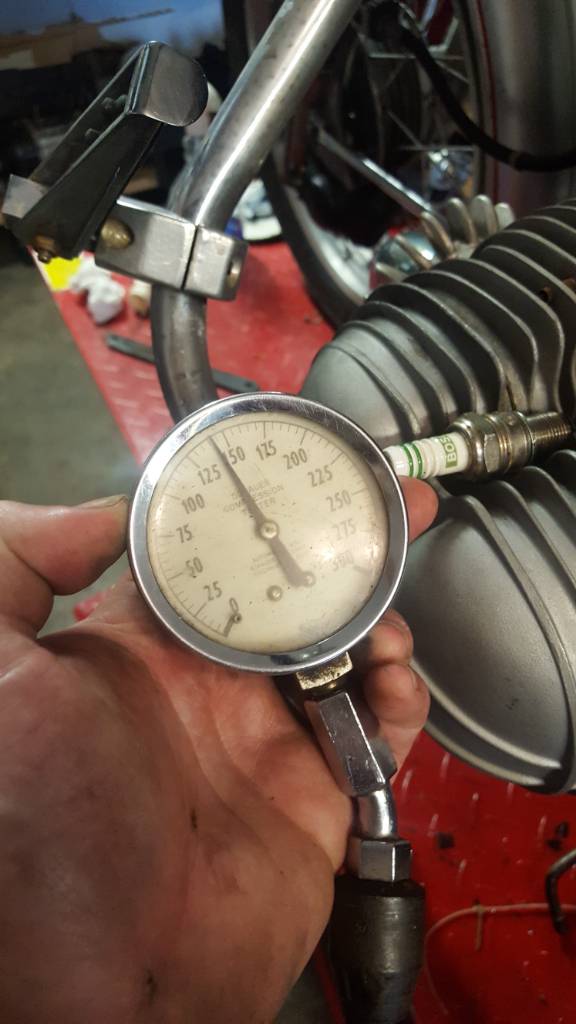 DTT BOTM WINNER
I can't believe you're going to ruin it by getting rid of the fairing and seat. Such a shame.

irk miller said:
I can't believe you're going to ruin it by getting rid of the fairing and seat. Such a shame.
Click to expand...

if it wouldn't cost a fortune, I'd mail you the fairing and seat in a box full of broken glass and an exploding packet of glitter

HURCO550 said:
... Luckily, I don't think it says Harley on it anywhere, so I should be good my wife doesn't care to ride, so I'm going to ridesolo. See what I did there Cory...
Click to expand...

I see what you did... wonder if I need to copyright the name I've used for somewhere around 30 years. Bike is looking good, brother. It was pretty nice when I rode it, but with some clean-up, tuning, and general attention it'll be a real sweetheart for sure. That fairing is sort of an issue; it looks great and gives the bike a very specific personality, but it IS heavy and cumbersome and the thing has a much more agile and sporty look w/o it. You're going to have to find one of these things for me so we can go out and terrorize the cornfields together! As for the king n queen seat... get rid of that thing fast!

You can bet the front end springs are shot or about to shoot. Mine were progressive....as in progressively getting worse. I had to do them after that first trip up to the Meltdown. Mine had a luftmeister as well.

Ellwood said:
You can bet the front end springs are shot or about to shoot. Mine were progressive....as in progressively getting worse. I had to do them after that first trip up to the Meltdown. Mine had a luftmeister as well.

Very well could be, honestly haven't put on enough miles to know ha

DTT SUPPORTER
DTT BOTM WINNER
Pulled the top end apart to do push rod tube seals. Upon some investigation, the top end is a bit of a mod podge of parts from different years. Rockers appear to be 75 model, heads are somewhere between 70 and 74 and the cylinders are unknown, but I'm guessing not original being as they are standard bore with not much wear and 90k miles on the odometer. Probably a swap meet or parts bin special deal, but no worries, it will still work even if not "correct". 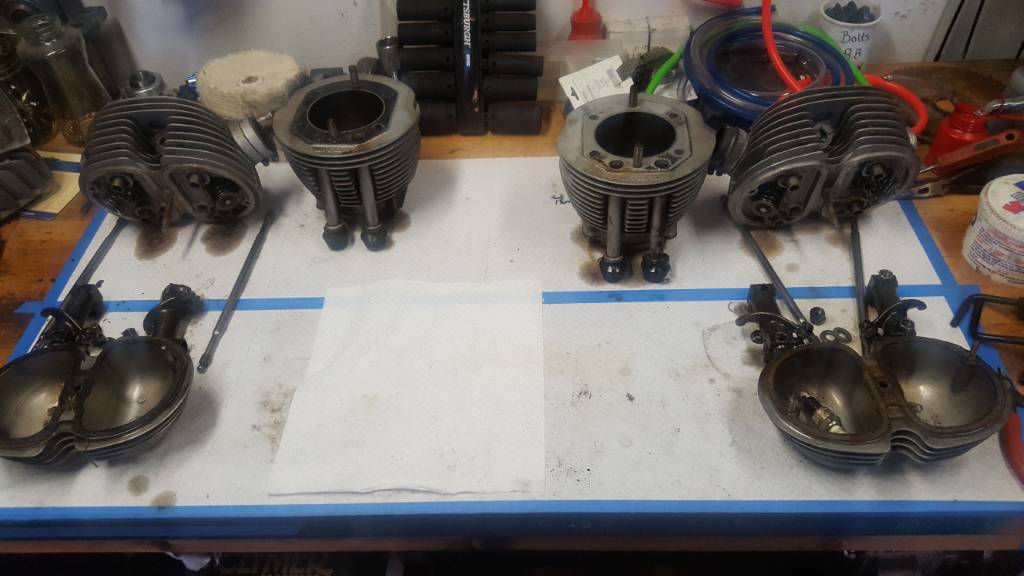 DTT SUPPORTER
DTT BOTM WINNER
Also, the hardly ableson seat came in, and its much wider than I had pictured, but with the extra width from the saddlebags, I think it will do fine. I think minus the bags, it would look totally out of place though. 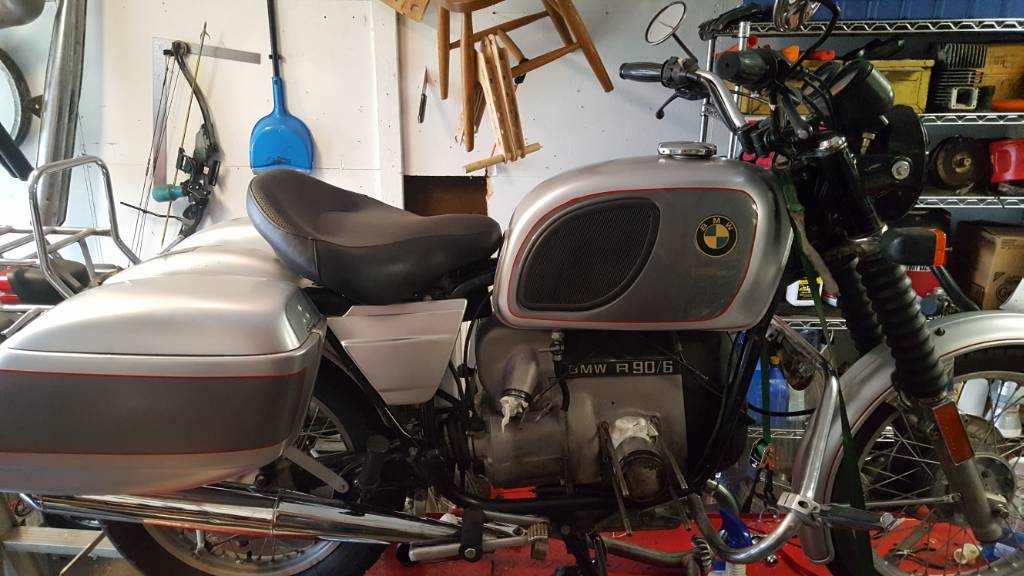 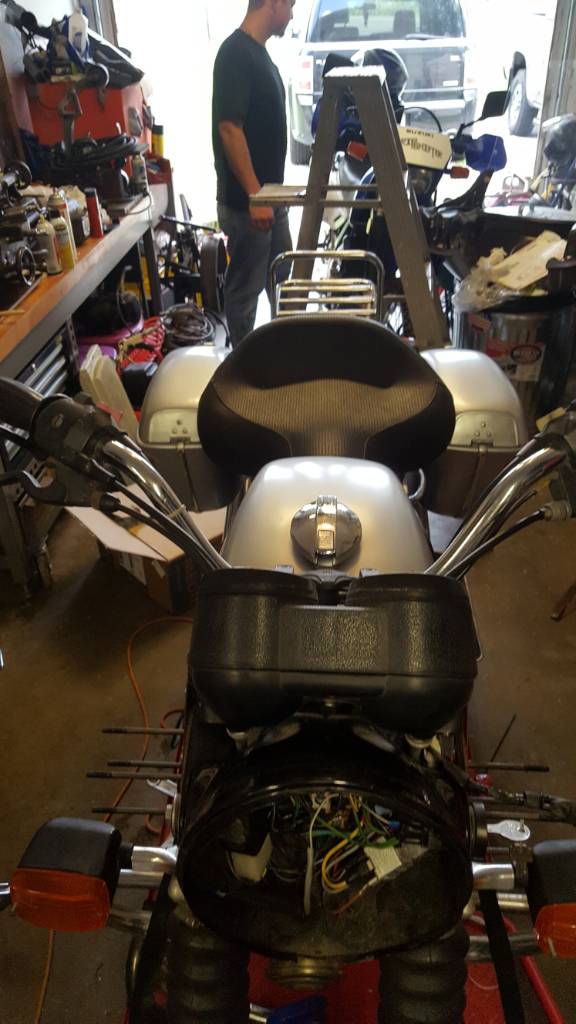 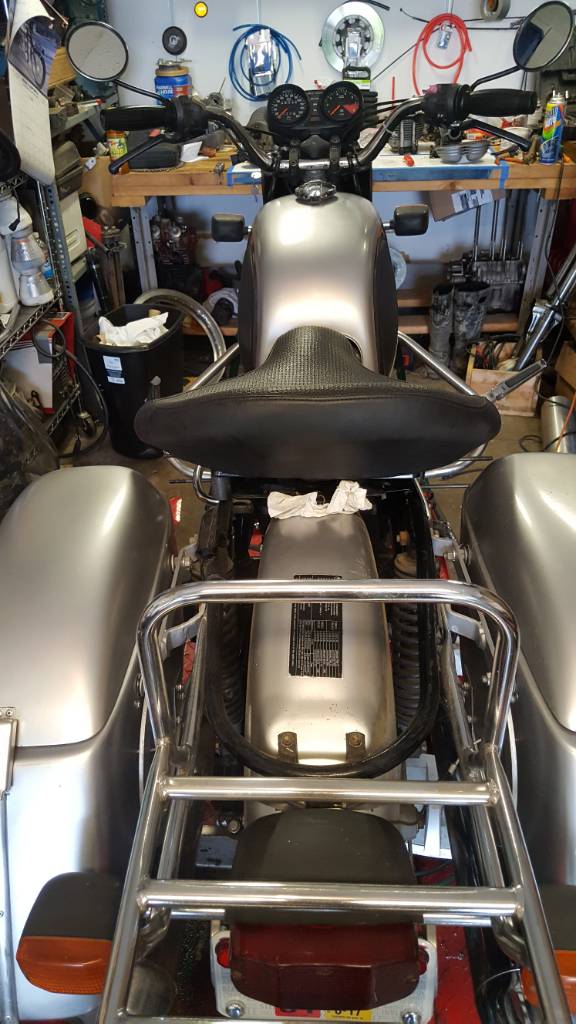 The beauty of seats is only when you park it. Gotta have the comfort or you won't go 30 minutes without getting off. If you set it up right you could switch between that and a cool looking flat seat or something. I have an old s seat that would fit that stock tail fine. Just need some paint to match it up.

Staff member
You could probably get the cover off the seat and trim some of the foam 'hips' off it. Narrow it down a bit towards the seam without losing any seating area. Just keep a smooth transition from the top to the sides.