DTT BOTM WINNER
I am sure you are right 40mm or is it 45? I don't remember, but the flanges are different I think. My idea was to use the larger diameter 4 valve pipes to avoid bending pipes up from scratch, but it really just illustrate how far down the rabbit hole we go when we start changing things. That's for the input.

We should probably return to Brad's thread. i didn't mean to take it off at a tangent.
B

take it where ever. pretty sure st3 have 40mm headers, probably written about it somewhere. i think it was one of the ways they hurt it because they couldn't have it making st4s hp. it's a single port with a 3 bolt flange? unique to st3.
B

the pipes on the 850 are what he could find easily at hand, and quiet enough to pass a rwc. it's pretty quiet. he's going to go something else once it's plated.

DTT BOTM WINNER
Fortunately or otherwise, no RWC or MOT equivalent in most US states. Unlike say Germany, exhausts can be changed to straight pipes and much as we enjoy the sound of unrestrained power, a pack of unsilenced sport bikes bouncing off the rev limiter in the early hours of the morning is a noise I used to hate when I lived in a large US city.

And yes 40mm and unique to the ST3 4 bolt flanges, I need new flanges to fit on larger pipes. yada yada yada.....
B

the monster has a very similar frame to the st - the st is derived from the 916 frame which is a larger tube version ish of the 851 frame which is what the monster frame is modified from, so the tank mounting and stuff to hide under it is much the same as the st. well, there's more stuff under it. so nothing else will just fit on, would have to modify something and bodywork is something i have no patience for. i could start it and just end up with something that looks unfinished because that's exactly what it would be.

and this is not meant to be an expensive bike. it's using up bits to hand sort of thing.

the downward slope on the back of the seat does annoy me, but i'm not sure there's enough in it to lower it there and under the riders arse. maybe. but building it up will also look a bit odd i think. altho that might give me more room (vertical visual height) for the harley rear guard section. i can see it in my head, just can't draw or make it.
B

given it's the start of 2001, this bike is now less that 5 years from being club plate eligible. so that's the timeline.

i took some more photos today with a back sheet so i could use editing software and have a consistant background, but i don't know how successful it'll be given the sheet colour is sort of like the tank colour i was thinking of using (to the software anyway) oh well. maybe just print out some black and white pics and draw on them. gone from thinking bright solid colours to candy over flake contrasted with matt where it's not candy.

i made some more cuts to the seat base and foam to get it more like what i wanted, and cut the seat lock bracket off. i was going to cut the side panel mounts off too, but am still a bit chicken about going that far. might have gone too far with the seat around the tank recess, will have to seat what the upholsterer can do to expand it a bit to fill the gap.

think i might move the rear brake caliper around behind the swingarm. the locating pin is an issue them - the original is where the caliper needs to be, so i'll need to cut it off and go again. i was hoping to not need to paint the swingarm for the first round because of the "if you're doing one part....." bottomless pit, but i guess i can rattlecan a spot or two. use the original mount, cut the current locating pin slot bit off and make a new slot to go with the axle moving. unless i can do that another way, but a new pin and slot is certainly the most effective and least amount of new bits and visuals added that i can think of.

thinking more about the engine, which has a crack on one side of the front engine mount, all i need to make the spare 400 cases i have into an 800 is crank. got the rest of it just sitting around, plus a 6 speed and aptc clutch from the 659 engine. don't have 800 cams, but have a heap of 750 cams and while they're a bit crap it'll have long manifolds which kills the 800 top end power so i really i shouldn't matter. just need to get a crank.

i was thinking of getting a piece of aluminium sheet and folding up some sort of rear guard thingy to go under the back of the seat and come out to mount the rego plate on, but it's a bit (like 11ty) beyond my skill set. maybe just use some flat folded to make a rego plate mount and obscure the end of the frame. dunno.

i was watching some born free featured builder youtubes the other day and there was one with triumphs and one had the rear stand that pivots around the rear axle and i thought ooooh. make up a triangular bracket either side that the rego plate and lights (those little combined indicator/stop/tail or even just some of the super bright led things) mount to and are protected by, and use it as a flip over stand. like the modern bike horrid swingarm mounted rego plate mount sort of thing, but when you park it, it's on the ground. still thinking about how to make it nice and stable enough when up and riding when it needs to be visual. more thinking to be done. 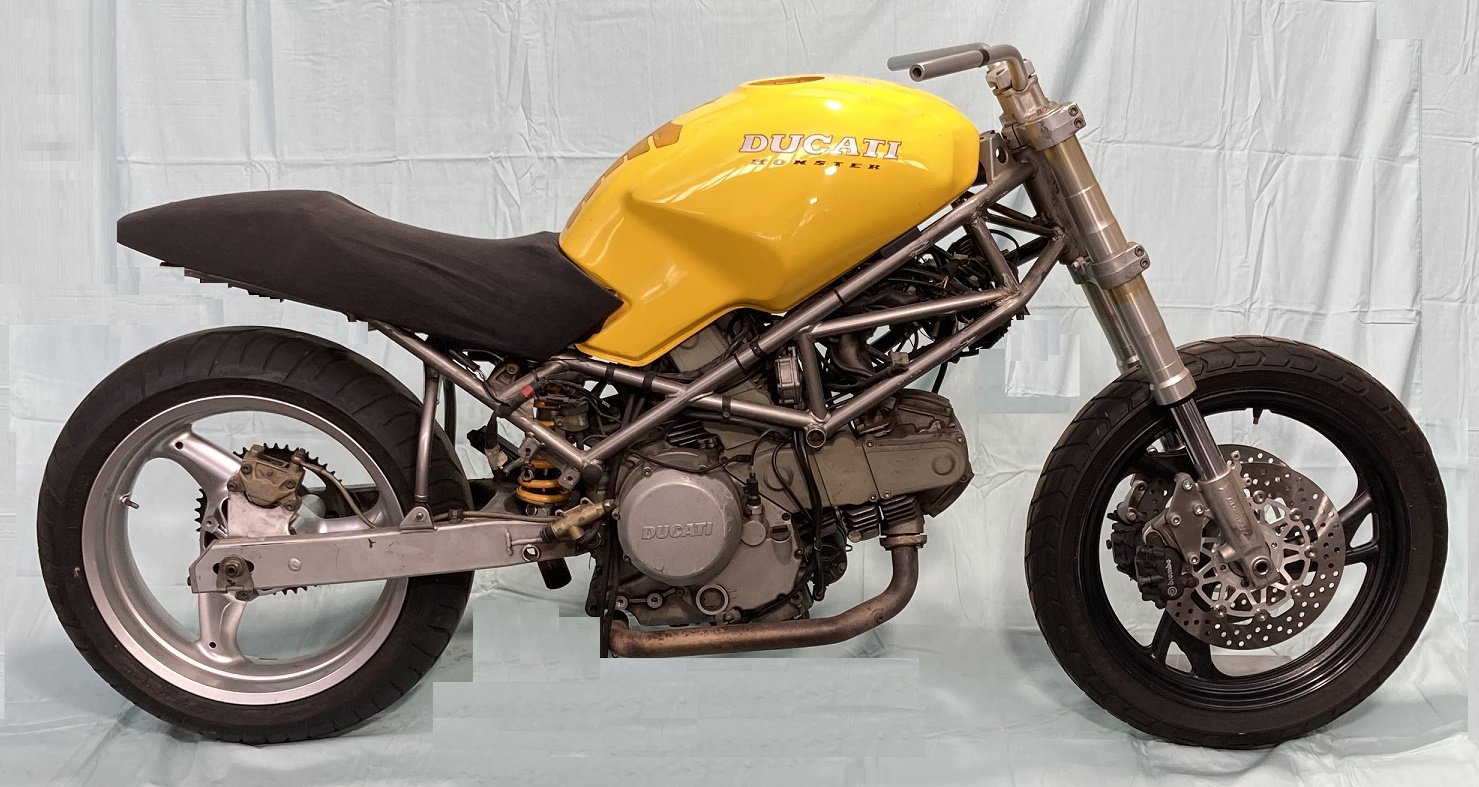 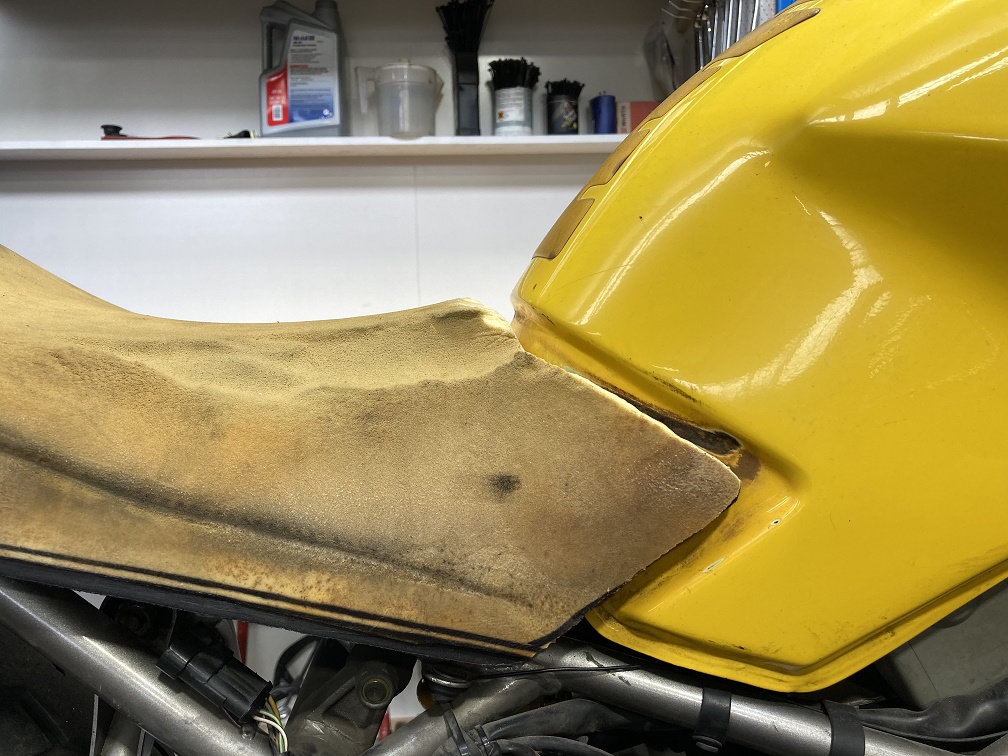 today's little pile of cut off bits. i promise to get braver. 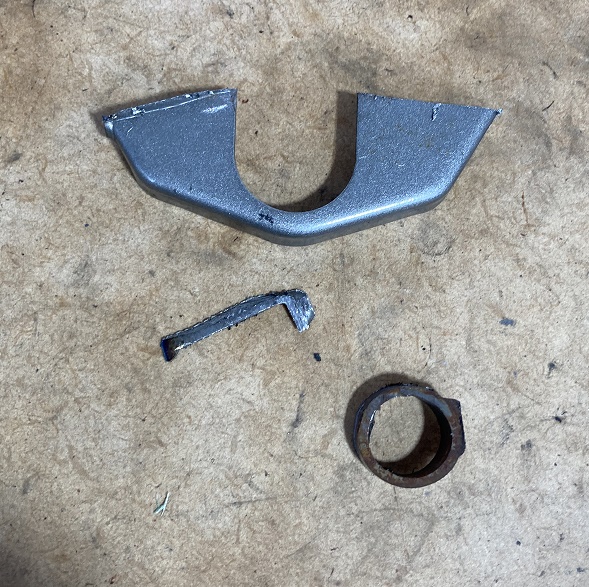 i've found progress with this thing to comprise me sitting looking at it and not really getting very far, without knowing why apart from being typical of my lack of direction. i realised the hold up with some footrests is that i need the bosses in the horizontal cylinder threaded where i'm going to put the lower mount for the footrest brackets - the upper mount being the front engine mount boss. the engine needs to come out and apart as it had a noisy 3rd gear when i rode it as a customer bike and i wanted to 6 speed it and i was thinking of making it an 800. but i really don't want to run an oil cooler for the messiness and visuals. probably a pretty crap reason, but it's never going to get used hard. it's either 400 and fully learner legal or 800 bits and apparently learner legal. which is just thinking about resale which may be somewhat unrealistic given it's 5 years or so off the road anyway. i've got some spare 400 cases i could build it in - they don't need a mount rewelding, but both have crap paint.