This will be my 2nd bike I have ever owned in my entire 54 years of being on this planet. I have had about 20 project cars and several musclecars among those so I am a decent wrench, I am a way better carpenter and we won't even discuss my "welding"

The 1st bike was a CX 500 Deluxe I ruined making a monoshock conversion. I sold it to a kid for $300 and he finished it. I assume he's dead now because I used "that looks cool" engineering on it. Its the only vehicle project I never finished in my life.

Here is the pic the guy sent me when he was wrapping it up. Maybe he survived, his shop looks way more likely to produce quality 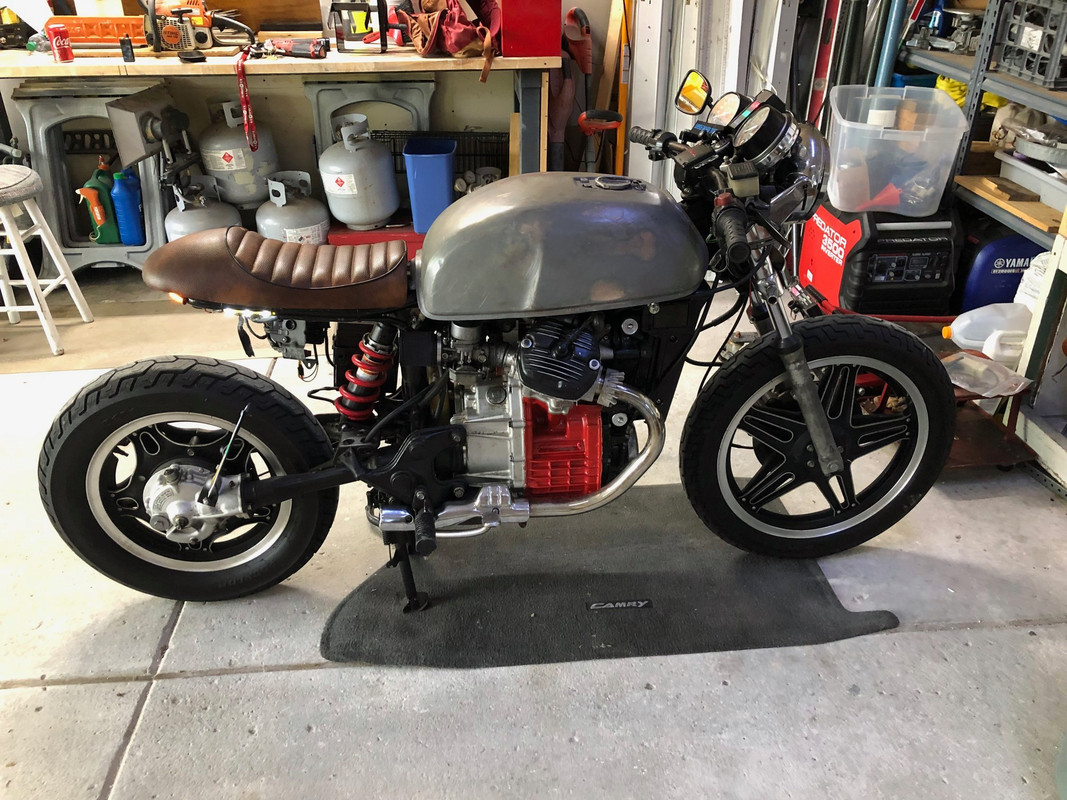 With that in mind I decided that spending the big money on the cleanest, best running well maintained CB750 I could find to cut up would be the safest way to build my dream cafe racer so I went out and bought a beat up rough not maintained $1000 one that ran instead. 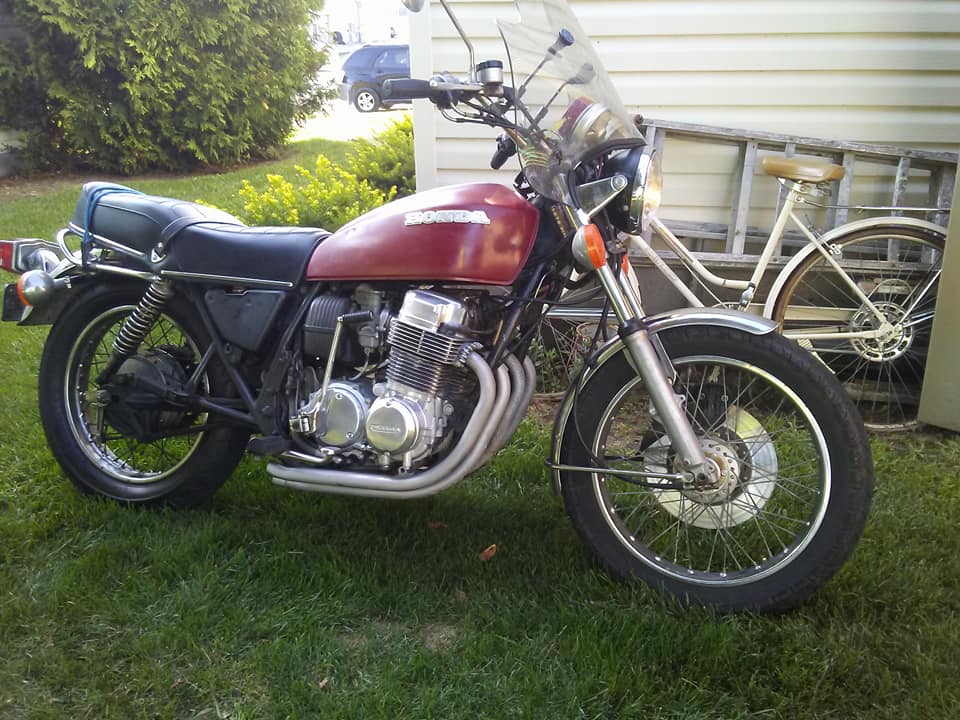 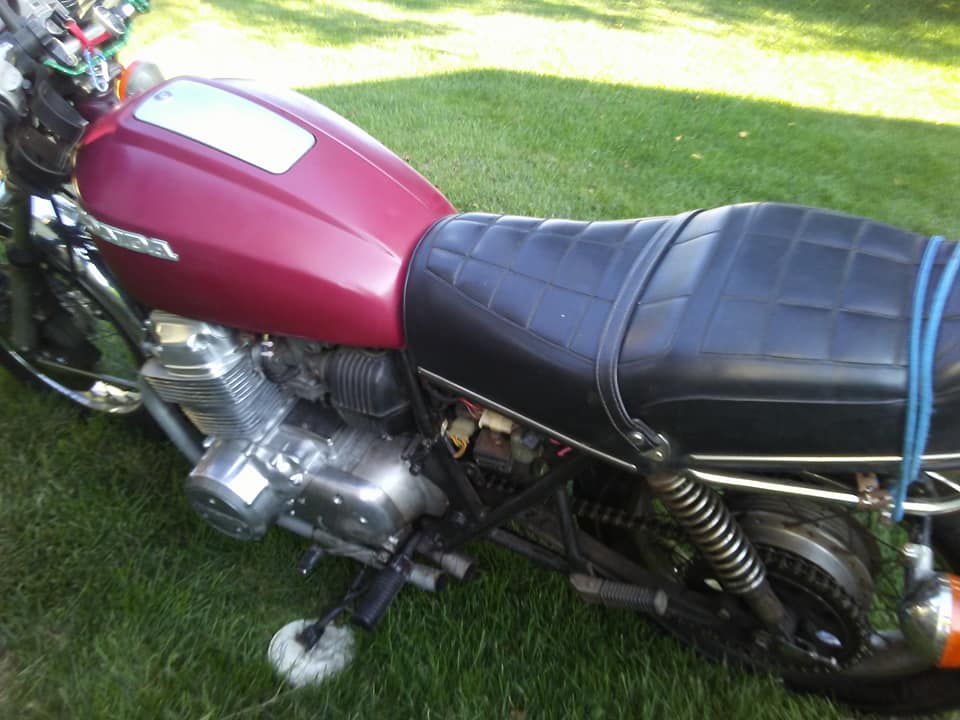 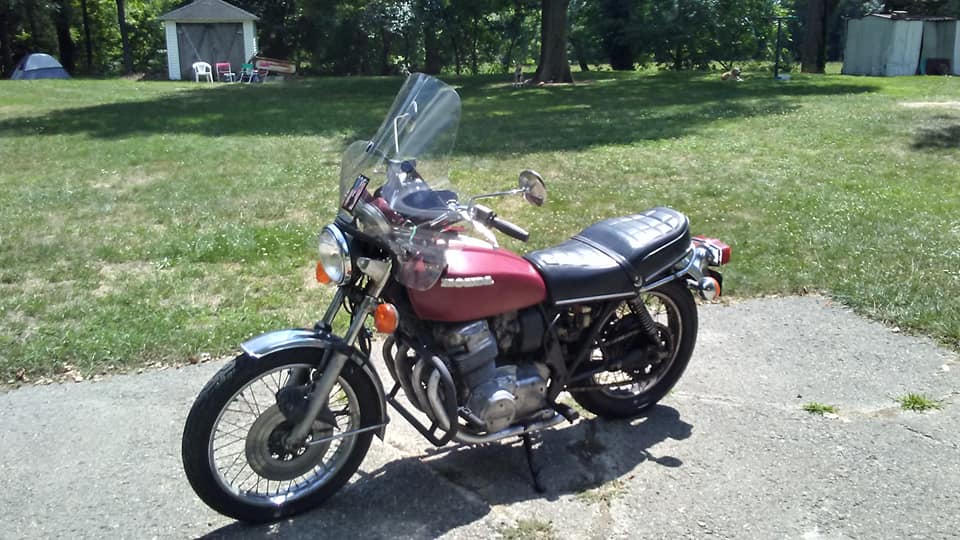 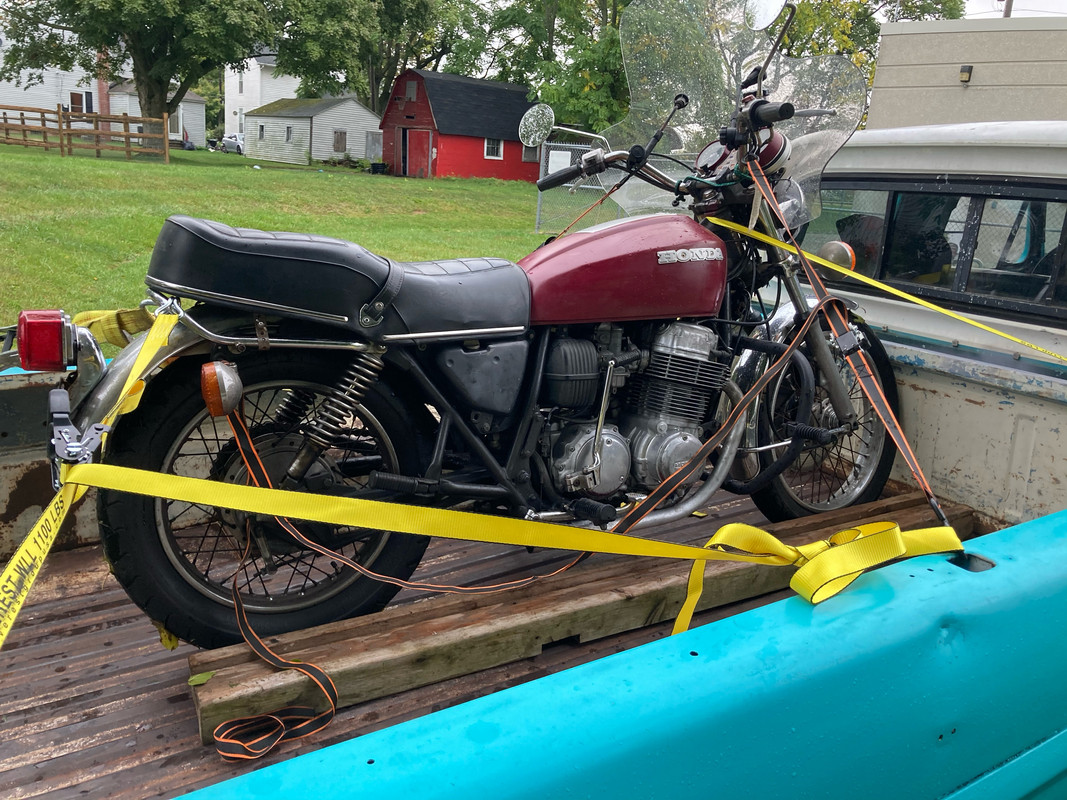 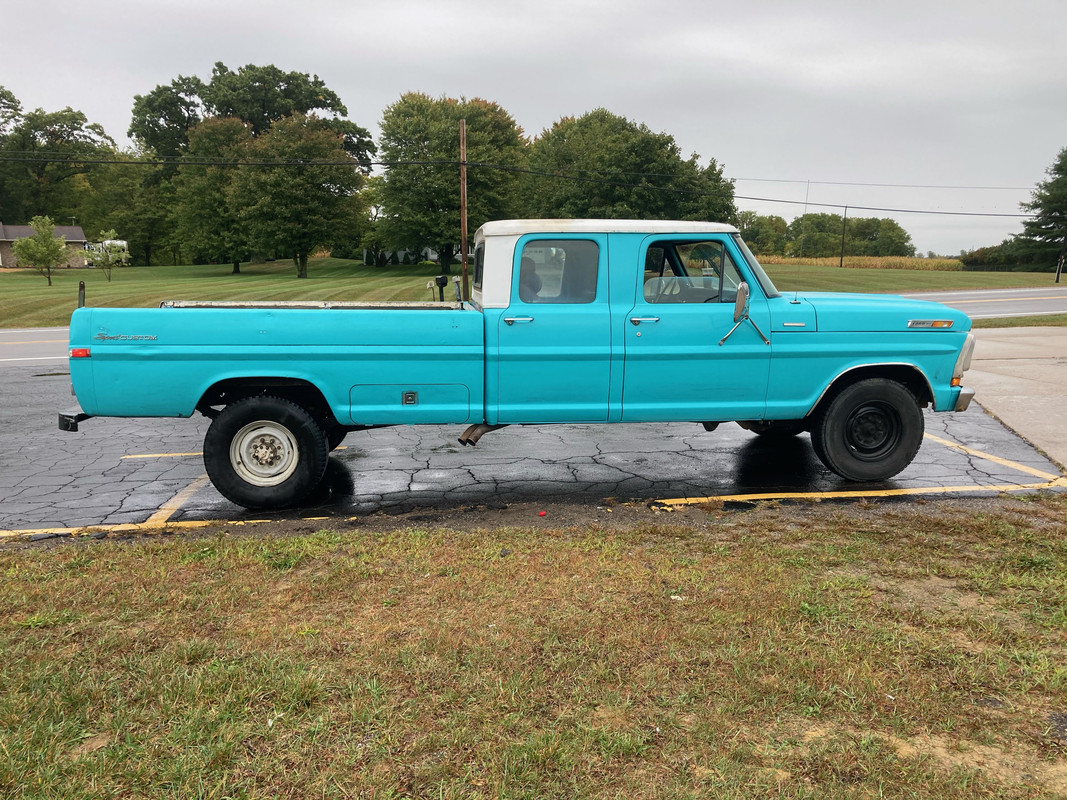 I got it home and started taking off the clunky bits 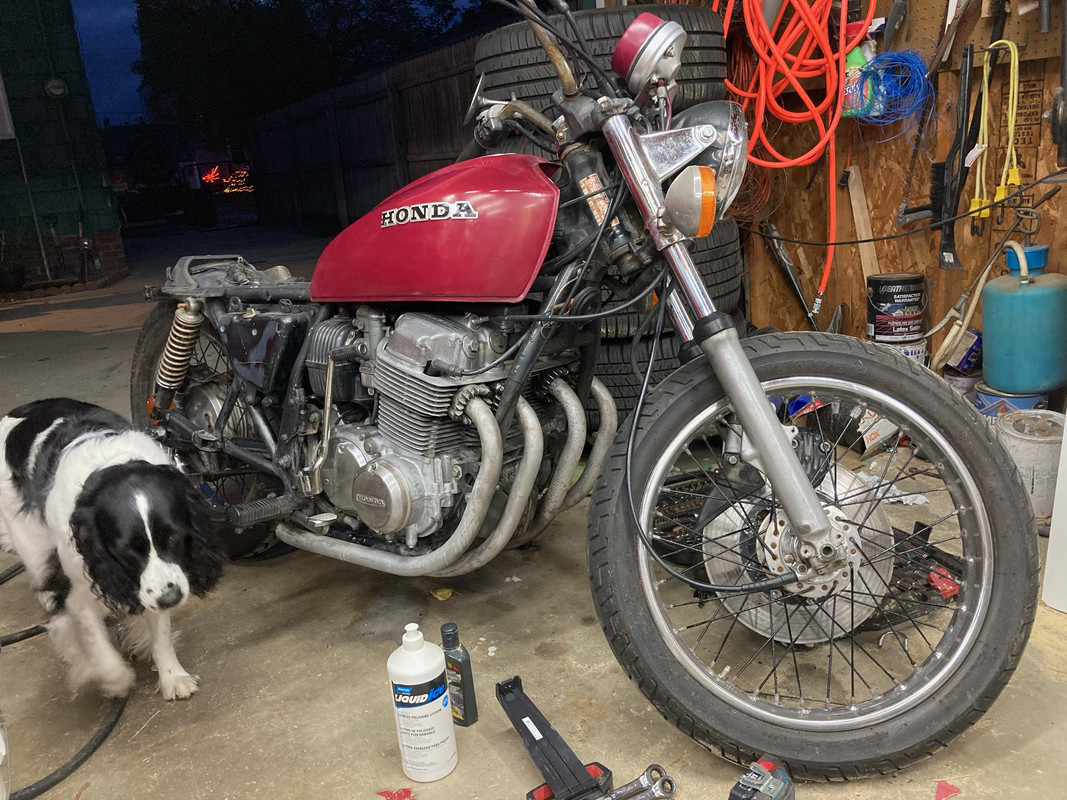 I then meticulously labeled and bagged all the parts so I wouldn't lose any of them.

Kidding, I threw everything in a bucket 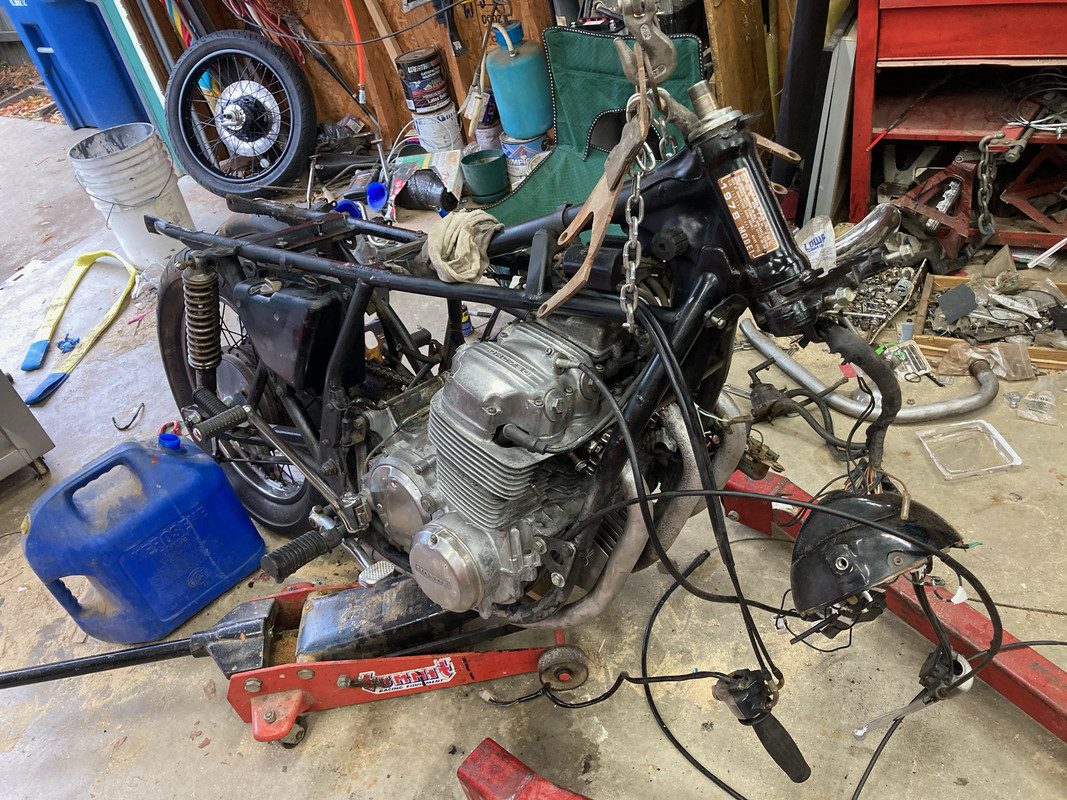 I did use an incredibly organized system to label the wiring connections. It's called "my memory" 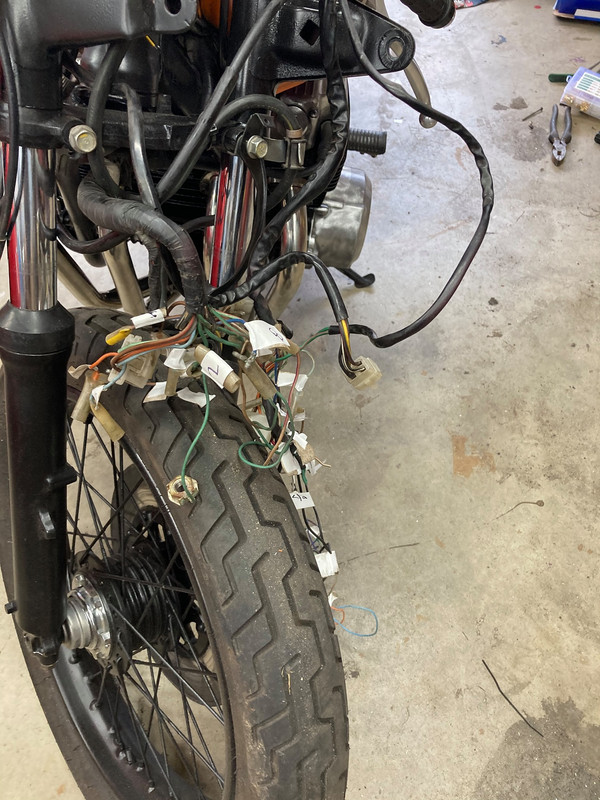 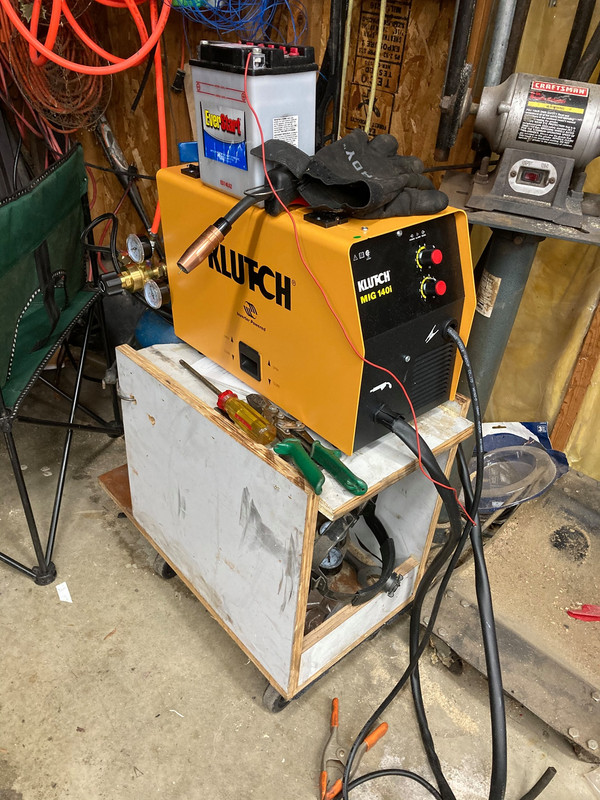 and a pile of cheap parts off Amazon including the ubiquitous rear hoop, a seat and LED turn signals and some other stuff 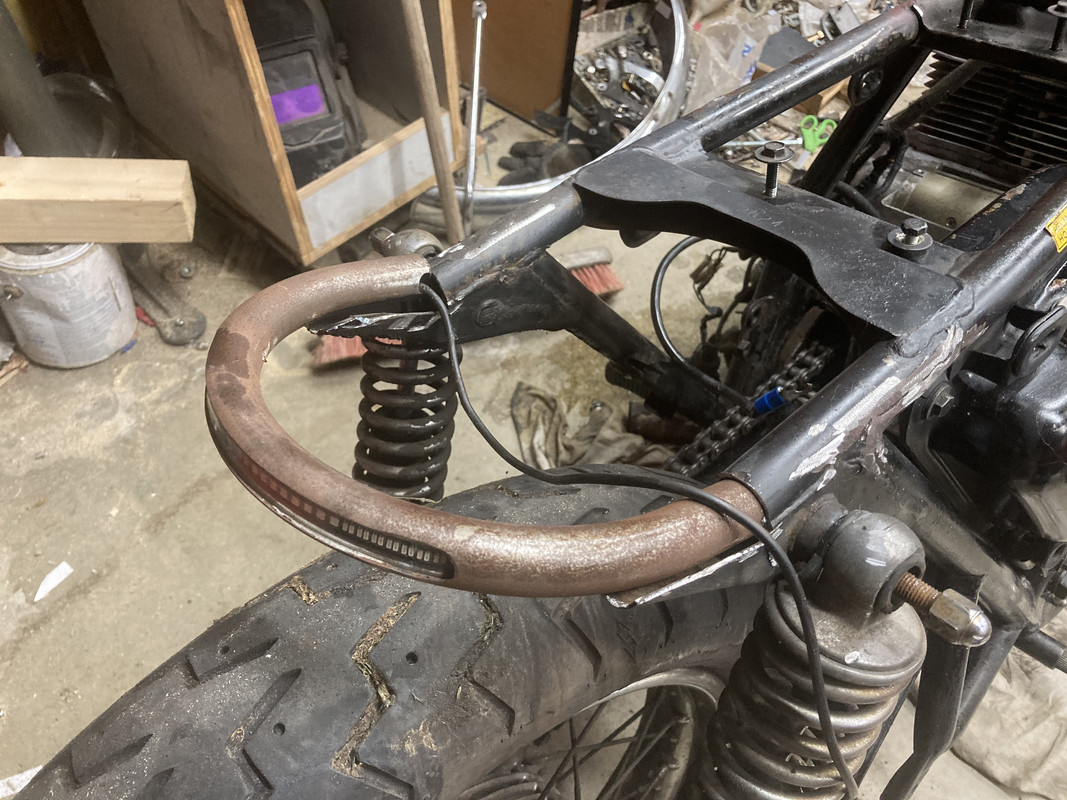 I'm so sorry you had to see this. Don't worry, I fixed it later. PS, those shocks didn't fit and went back to Amazon. If anyone has had better luck with this brand let me know
S

My 1st order of business was to do a compression test, clean the carbs and change the oil and plugs but that stuff is boring and costs real money so I busted out the rustoleum and painted the tank for a color test. I settled on orange 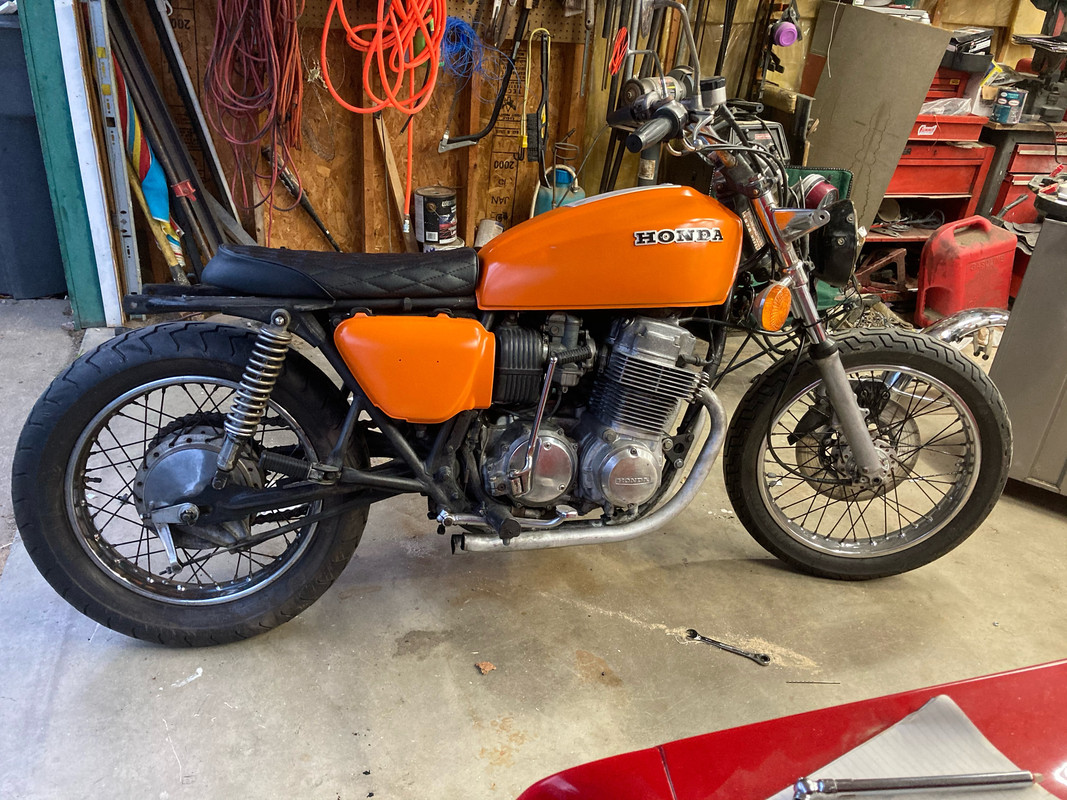 I then tore off the front forks and rebuilt them and the brakes.

OK, no I didn't. I painted more stuff and added the clipons 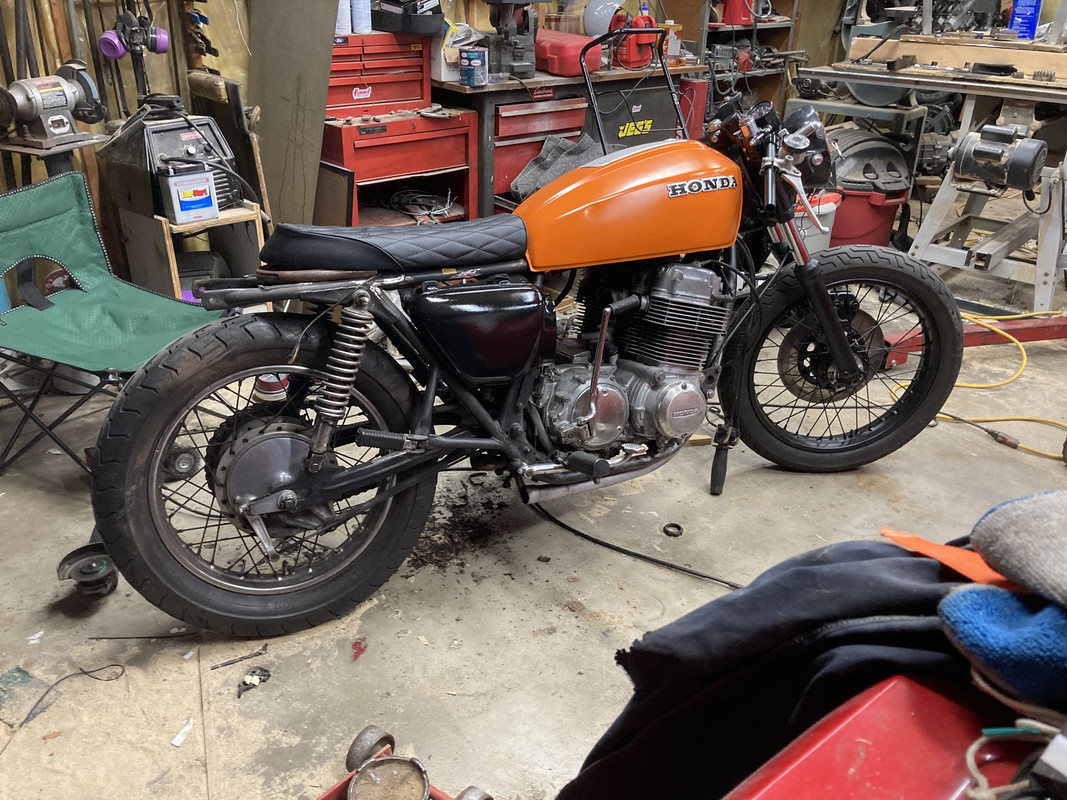 I then got the bike prepped for more painting. LOTS of degreasing and wire wheel 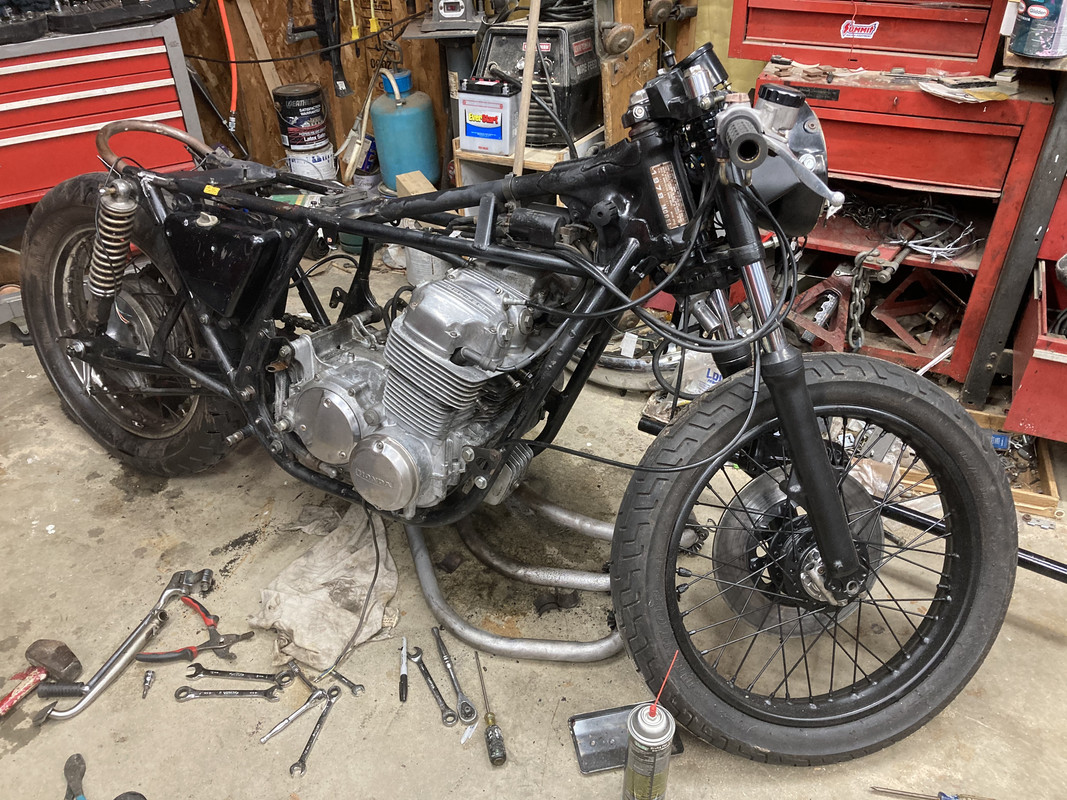 After painting the engine, I placed my cheap Amazon parts on the bike and pushed it outside to inspect my work sober in the sunlight 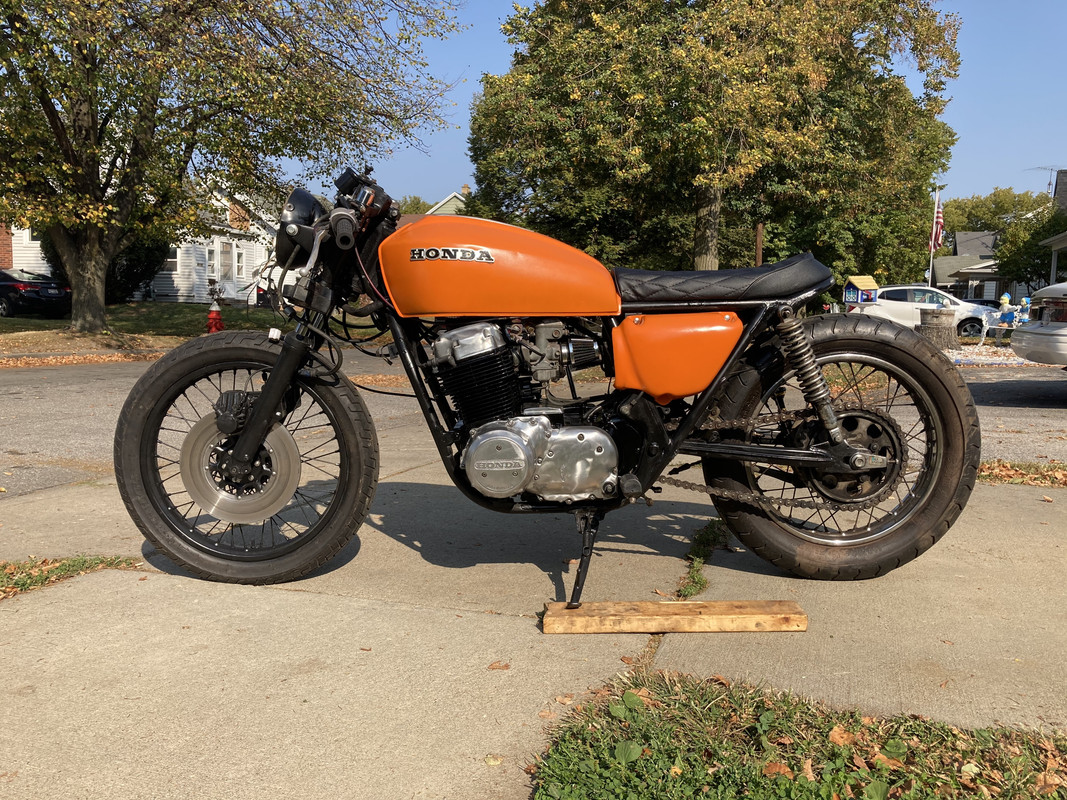 My Dekelvic header showed up 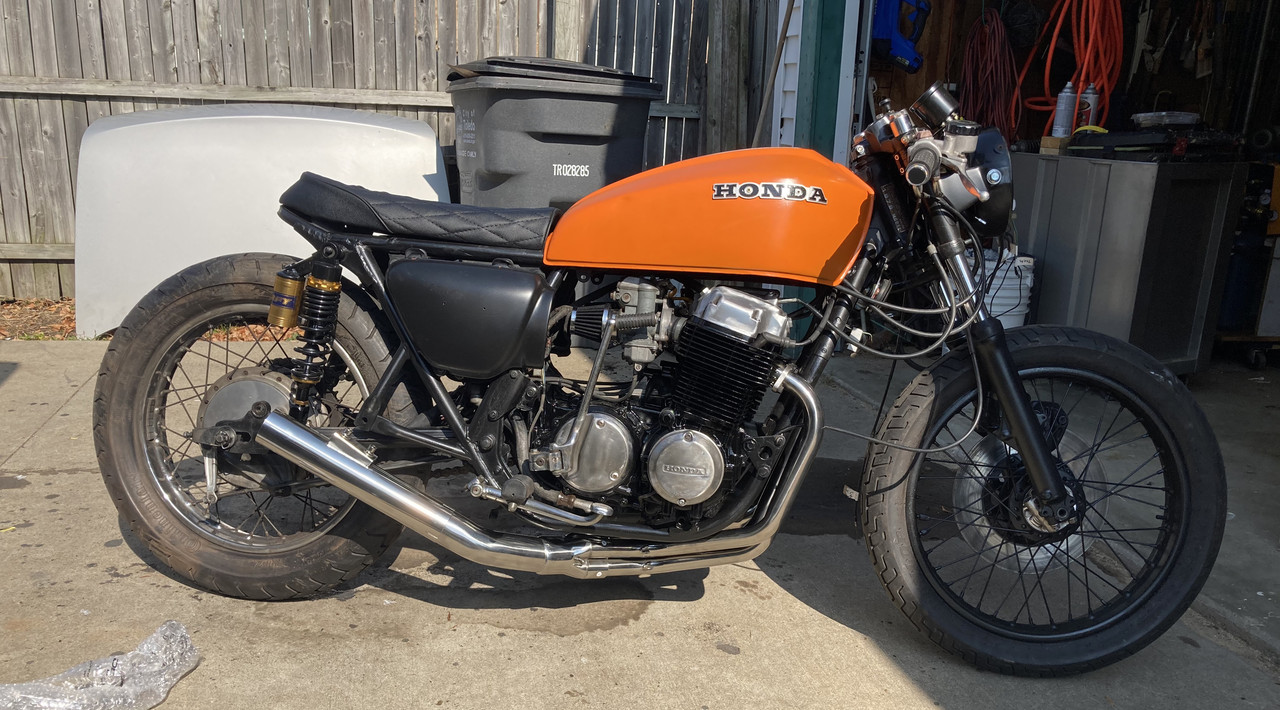 I then rebuilt the swing arm, maintained the chain and the rear brake. OK, no I didn't.

...I finished degreasing the rear end of the bike and painted the wheel and side cover. I added the emblem 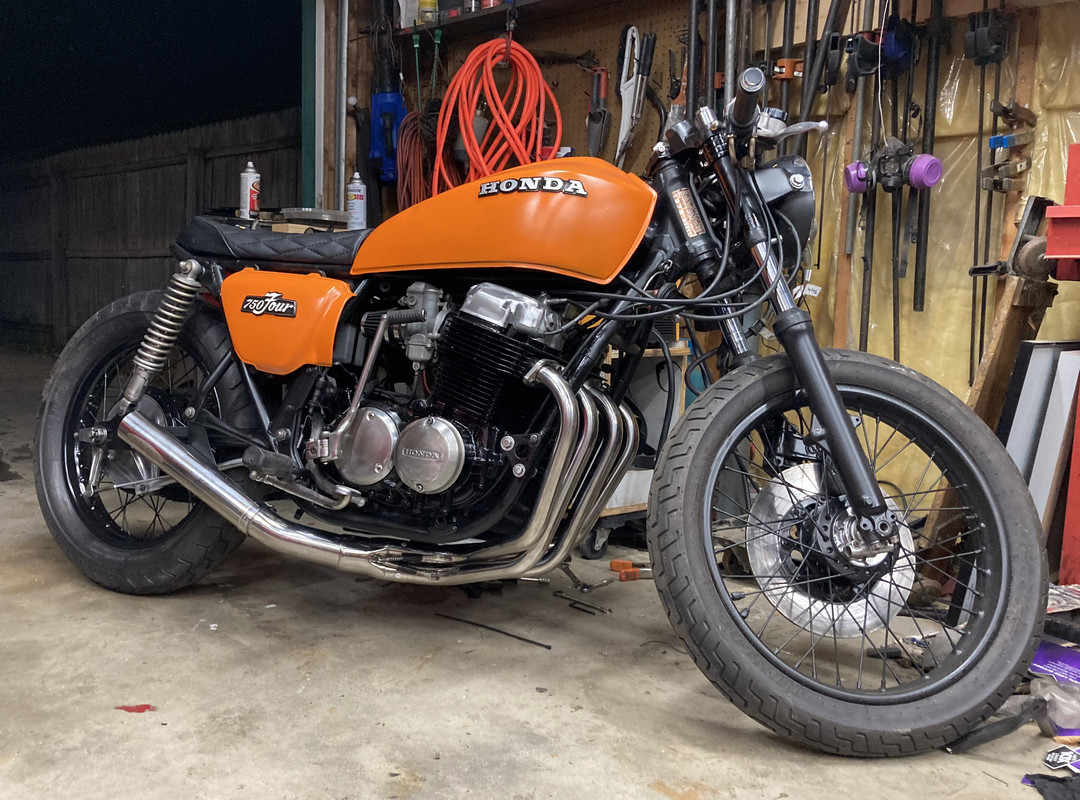 Here is how it sits after everything but the electric work wrapped up... 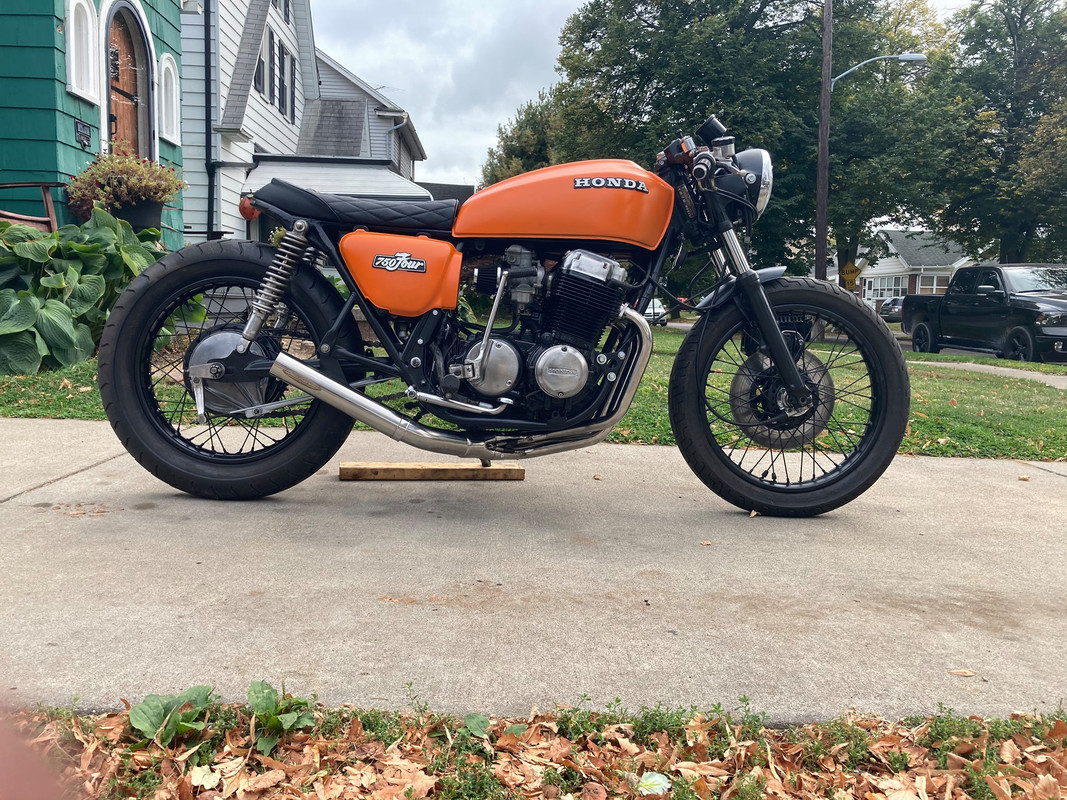 I got the wiring mostly wrapped up. I even used the correct bullet connectors and shrink wrap. This I actually did do right. Popped the tannk back on and it started on the 1st try
S

I then took it around the block. Let's pretend I had gear on, it was titled, licensed and insured. 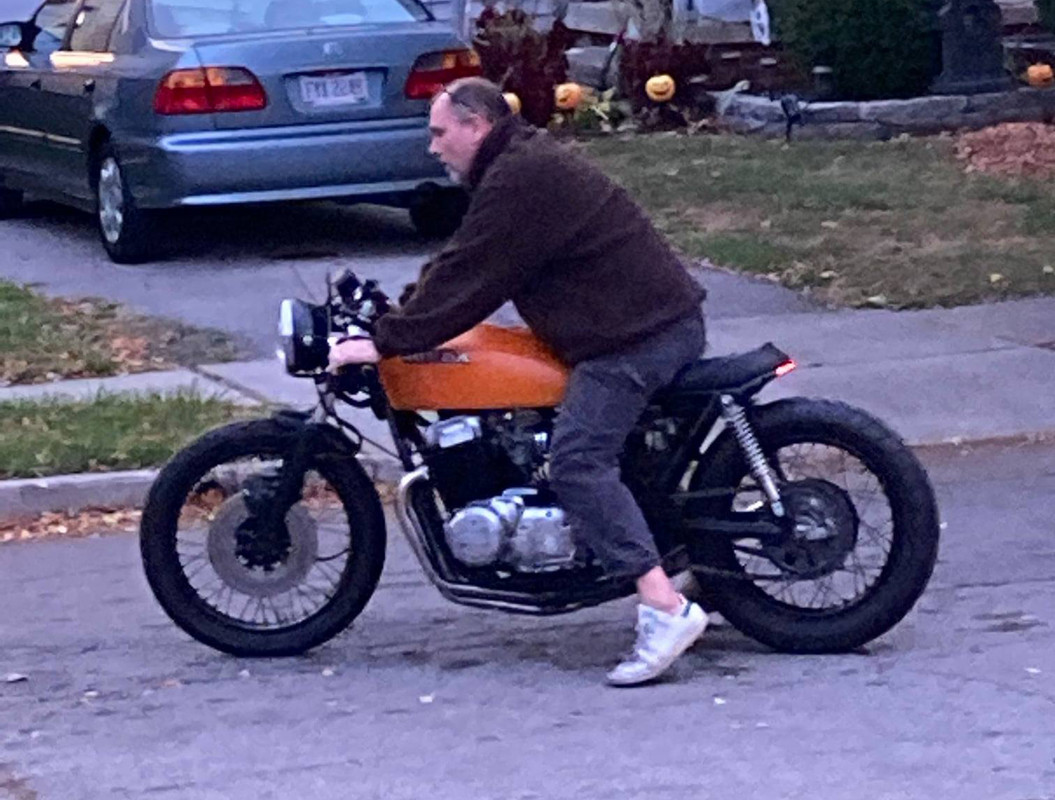 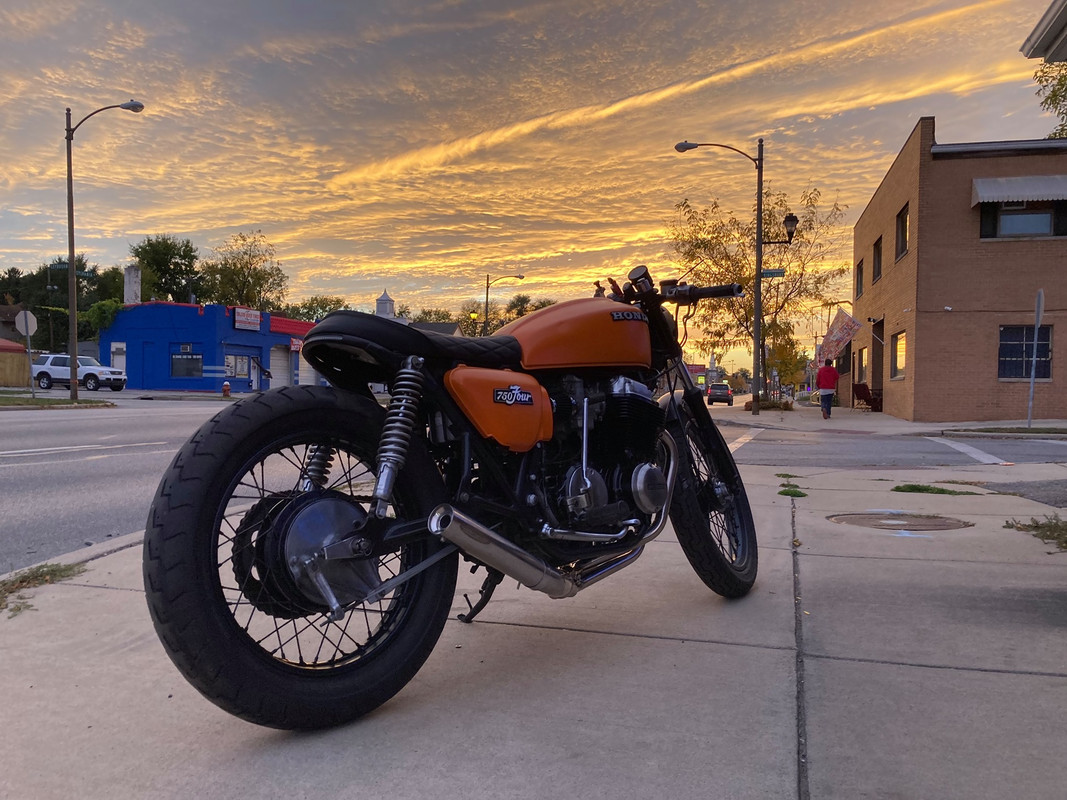 Today I went to the DMV and got all that done and bought a helmet. I really did

DTT SUPPORTER
Now that's a build thread. Love the bike. $1000? You stole it. How does that Delkevic straight can sound? They shipped me one by mistake (along with the megaphone that I actually ordered) and have it sitting in my shop. Bet it sounds like a rascal.
S

It's really quiet compared to the hacked off pipes it had. Sounds nice. I haven't had it past 3rd gear on my shakedown drive around the block so no high RPM sound yet. I have the headlight out and I am trying to sort the wiring mess the PO did on it. Honestly the guy did OK on the bike. It ran when I bought it, had new plugs. Chain tensioner had been set and the valvelash adjusted. I expected the pod filters to kill it - and it may at higher RPMs but for now it seems to run well and idles good. The valvetrain is noisy. I do not know if that is normal so I am ignoring it. I changed the oil and it was as black as coal so that was kind of a bad sign. It has the original wiring but it was still pretty pliable and the battery area needed cleaned up and re-routed. That is done now and I assume the LEDs probably took a load off of it Forks are great. I think they were rebuilt. Needs a new front brake hose and a switch.

Lots more to do. Basically all the stuff I skipped in my posts above but I'll work on it over winter

First round looks pretty good. After round 2 in winter should be a great ride come spring. Like the humor in the posts too.

Took it for a longer ride today. Idle is all over. Cables probably need routed properly, pod filters may be an issue and seat position is as comfortable as falling down a fire escape. It's way too fast for how junky it is.
K

Love it, nice colour too!
S

Tossed the airbox back on and went for a ride. Seems a little better, Working on gathering some tools to do a compression test and balance the carbs. 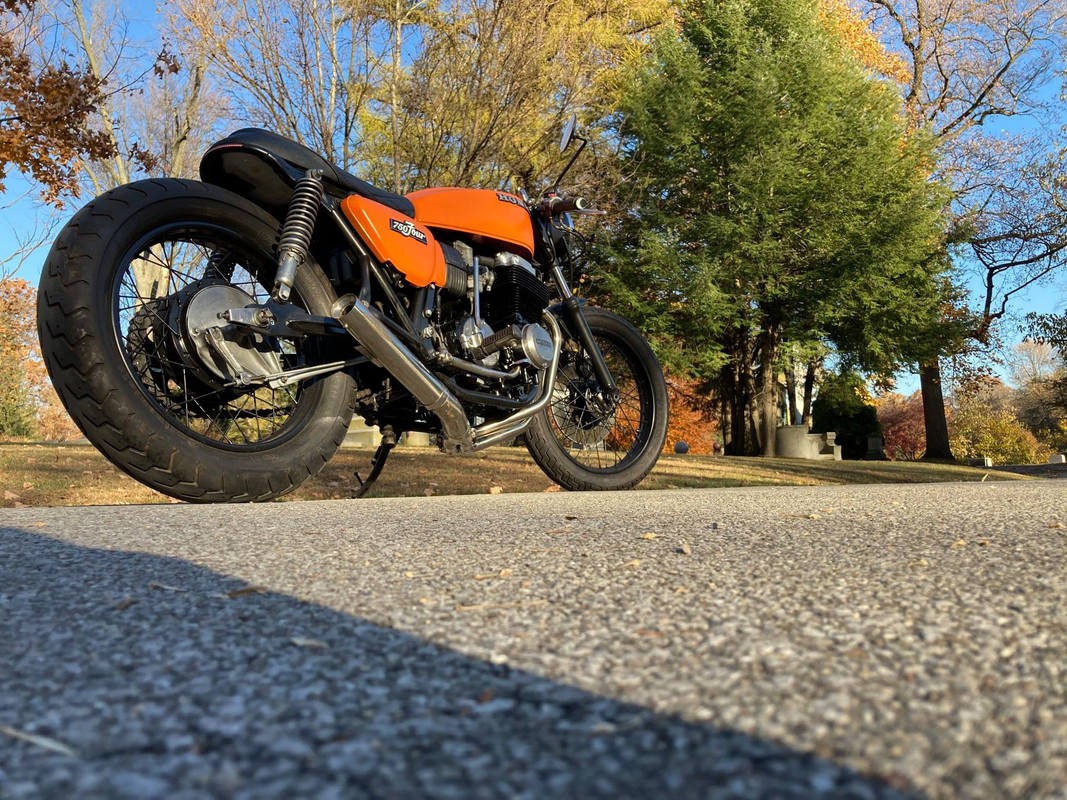 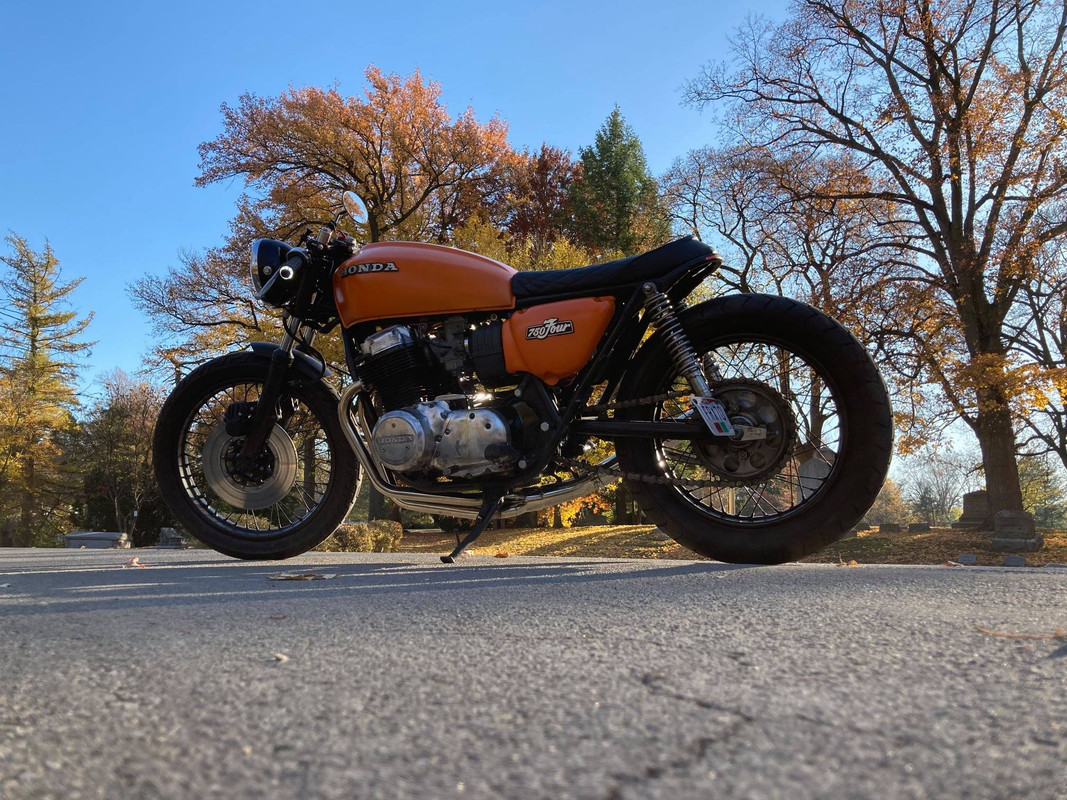 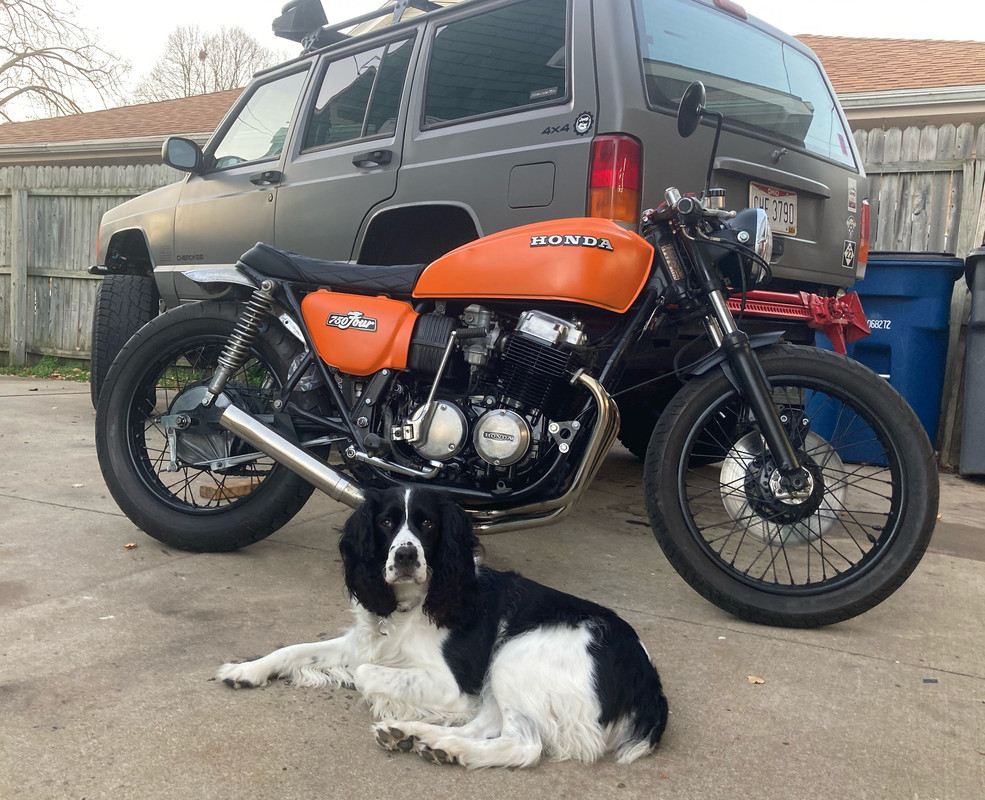 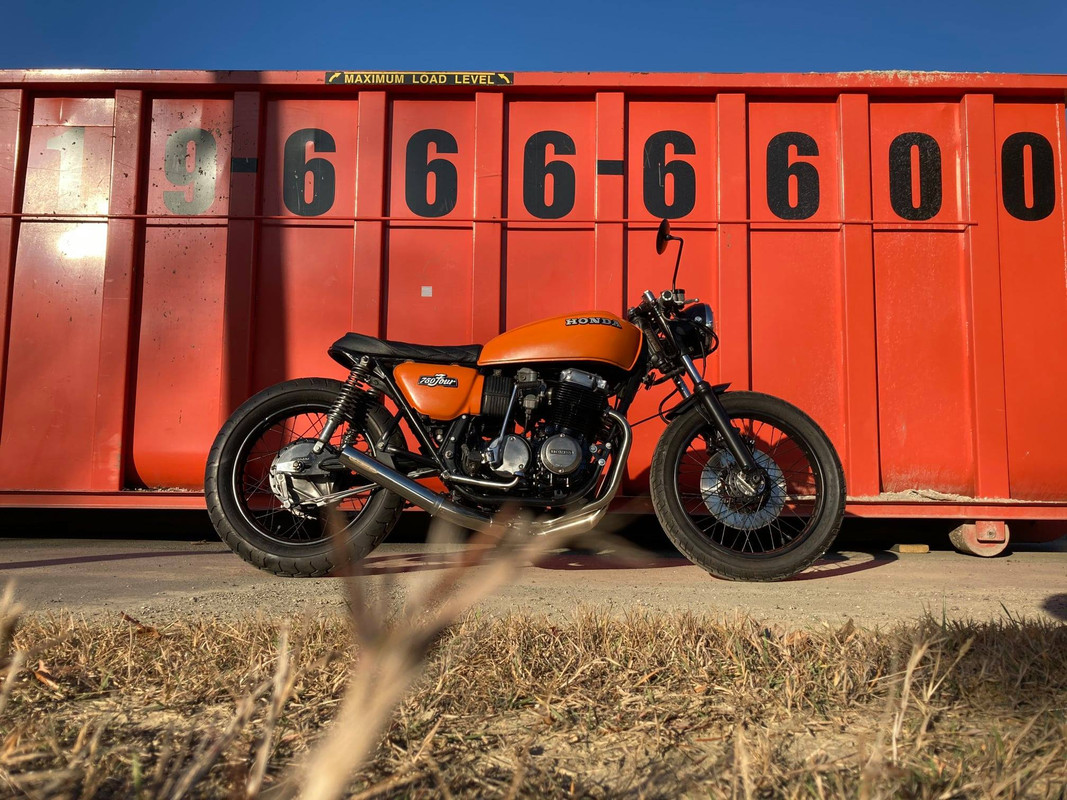