I've been a member here since 2014, when I bought these bikes and I've never posted before. I've been pretty active on another forum more specific to these bikes, but I think it's time to transition a bit to a place that may be a better fit at this point in the build.

So a quick recap:

I paid $300 for one titled, another on a bill of sale and a 68 CB175 in even worse condition. Both 350s were seized and wouldn't roll or shift gears. Both engines had holed pistons. The brake shoes had delaminated from the backing and re-laminated to the drums. Bolts and screws were rusty, stripped, bonded to parts, etc. Rubber parts were dry, brittle and crumbled. Tires had to be cut away. They were basket cases, but mostly intact. Many months later, I finished the rebuild on one engine:

And started working on the frame:

I only work on it a few hours every weekend, and it's taken a long time to get this far (hundreds of hours polishing parts):

Almost everything on the bike has been completely rebuilt. Absolutely everything has been disassembled and cleaned, at the minimum. I've learned a lot in the process and really enjoyed some tertiary projects. I built a parts tumbler, electrolysis tank and learned to weld.

Right now, my goal is to get it running before stripping it back down and sending it out to powdercoat the frame. So it's time to buy a bunch of parts. I have a wiring harness, rectifier/regulator, ignition switch,coil packs, etc. I need clip ons, throttle, grips, cables and switches right now.

This is what I'm working towards:

unfortunately that's the only photo that is working in your post for me so I can't see the rest.

Huh. That's odd. They're showing up in the preview. I'll try some edits.

Uh, yeah, I give up. The formatting is totally screwed up, but that's the best that I can do. They are, at least, in the correct order.

Thanks! It has at least a couple of your parts on it.

DTT BOTM WINNER
did amazing work on that engine! must have taken quite a bit

Thanks - yeah, it did. It was a huge learning curve for me. I started by scrubbing with Simply Green. Then I spent a ton of time with a Dremel and lots and lots of brass and ss brush bits. Eventually I tried soda blasting, which didn't help much. Finally bought a bench grinder and some buffing wheels. That seemed to do the trick. The clean up part of the process took over a year.

The rebuild was relatively easy. I had it bored and decked, but did the rest of the work myself. It's a pretty simple engine. With the FSM, it's really a piece of cake to tear down and rebuild. Having said that, it hasn't run yet and has been sitting for 2 years. I'm mostly concerned about the assembly lube at this point. I'm pretty sure it's just a dry powder by now. And I'm not sure if the engine can be pre-oiled before start up. 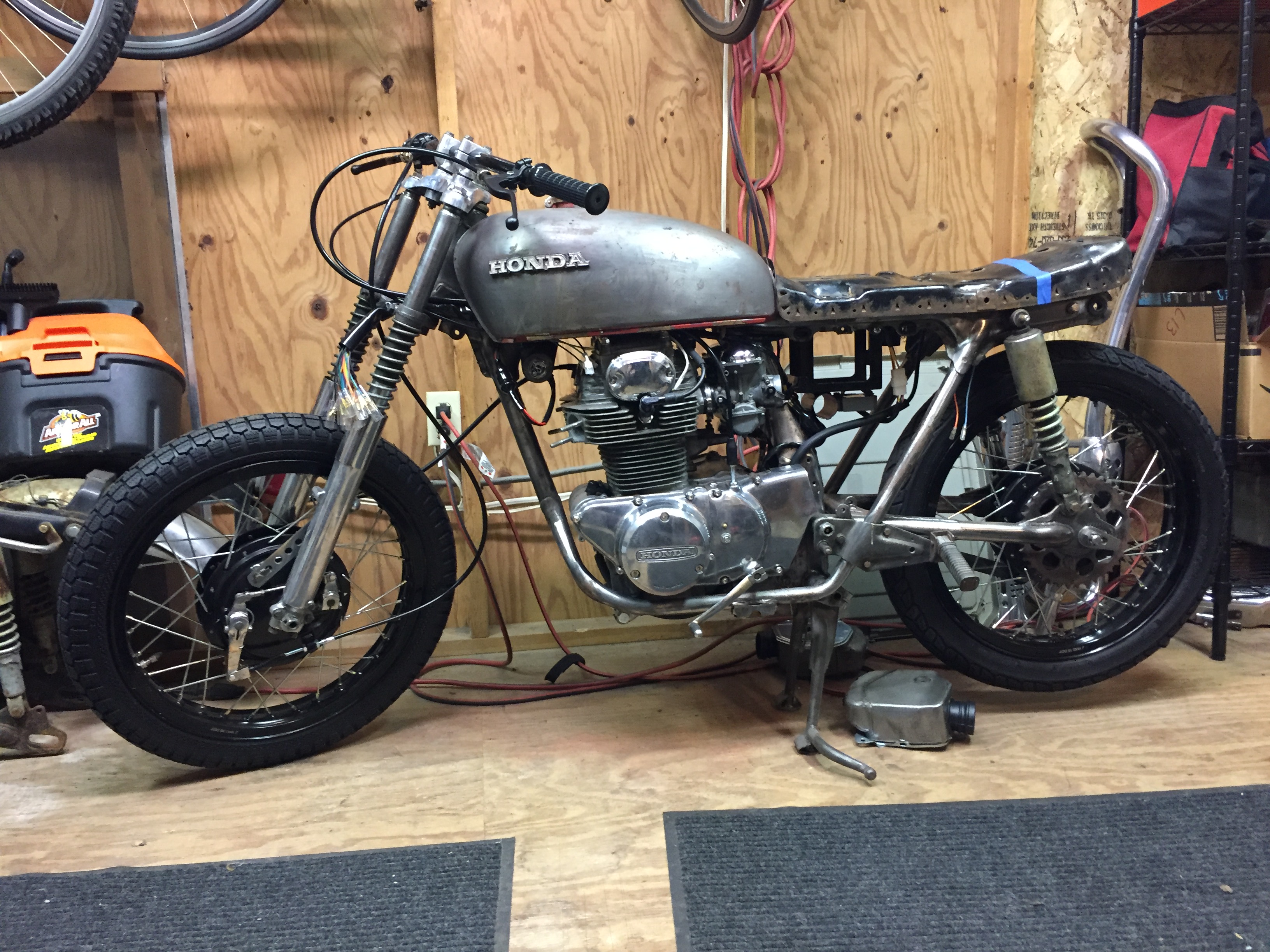 I've added bars, grips, throttle, levers, cables, wiring harness, starter cable, solenoid, rectifier/regulator and just a bunch of other little bits. There was a bit of crappy welding involved to get some of these to fit.

So I have to deal with the tank, which has a small dent in it, I believed caused by some handlebars at some point. And I tried Evaporust to deal with the insides. It did pretty well, but definitely needs another treatment. It also left some yellow deposits, so I'm a bit anxious about using it again. I'm thinking about turning this over to someone else to deal with. I don't like doing that. I try to do everything that I can, and learn how to do what I can't.

And I have a larger concern. It doesn't shift out of first, as best that I can tell. It seems to find neutral, and solidly clicks down to first, but won't shift into the upper gears. I've been told that a chain will fix this, but I find that hard to believe. It would really suck to have to pull that engine apart again.

There may have been varnish buildup from old gas in the tank. Evaporust can't get through that. Maybe acetone soak for a week or so, or MEK for much less time to get to rust that Evaporust can treat.
C

I do not know how technical this is but.. From experience when you are able to rock the bike back and forth it helps the gears change. Having a a chain on would allow the gears to rotate inside the transmission

Knoxes said:
And I have a larger concern. It doesn't shift out of first, as best that I can tell. It seems to find neutral, and solidly clicks down to first, but won't shift into the upper gears. I've been told that a chain will fix this, but I find that hard to believe. It would really suck to have to pull that engine apart again.
Click to expand...

These bikes won't change gears (at least not easily) unless either the back wheel (with chain) or engine is turning.

The source of the original info was a guy that should know, but also a guy that I don't know well. And he's likely to get some work out of me before this project is done. So it's good to know that he's been validated.

As your shifting up into 2nd, grab the sprocket and give it a turn, it'll shift up. the transmission likes tension on the gears to click.

So I sent the tank out to have it chem dipped and then to a dent wizard. I rattle-canned some primer on it just to hold over until I send everything out for paint (which could be months from now). Over the holidays, I had hoped to get close to trying to start it, but ran into a problem. Something wasn't right when I went to set the valve lash and decided that I needed to pull the engine and check the cam timing. It's been 2.5 years since I rebuilt the engine and I couldn't remember the process.

This turned into quite a project. I tried multiple times to get the cam sprocket lined up with the LT mark on the stator, but eventually settled with this:

Just one chain link in the other direction ends up with this:

The top pic is retarded and the bottom appears to be advanced. And the top pic seems to be closer to level with the top of the cam case, so I'm going with that.

Unfortunately, I now have to replace all of those gaskets, so all progress is halted again while I wait for parts...

Oh, the tank can be seen hanging in the background. Stupid - I shot it with the wrong filter on my mask and then sat in that confined space for another couple of hours. A week later and my sinuses are still a mess.

Everything is back in now except for the exhaust. It has power and oil, but no gas yet. I'm trying to work out the electrical, but this is really the weakest point in my already weak skill set. I have a reproduction stock harness, a Sparckmoto retifier/regulator and a stock starter relay. The wires from the harness don't color match the starter relay so I just plugged them in according to the connector type. And the new key switch only powers everything in the accessory position. I already blew the main fuse - not even sure how I did that. I'm just trying to see if I can get the starter to turn the engine over.

I've discovered that the starter was "bad". I don't even know what that really means other than it won't spin. I *should* know, because I rebuilt it two years ago, but I don't.

So I've pulled the parts bike starter and broke it down. I'm pretty sure I have a whole other rebuild kit because I vaguely recall buying 2 for some reason. I've read plenty about the rebuild process and I can follow directions. But I probably thought that was true when I rebuilt the other starter too. Wish I knew why the other one wouldn't spin. Nothing in the gearing seem bound or locked up.

I still don't know why it wouldn't spin, but after assembling, disassembling, re-assembling (repeat 2x), I finally got one to spin freely. I think something in the windings was interfering with the armature. It's back in the engine and the engine is turning over (no fuel yet). That's a huge step forward. Now I just need to fuel it, time it and install the exhaust and it should be ready for a test fire.

Since I started this thread, I suppose I should update it. I've been working on the bike pretty regularly. Since February, I sent the starter out to get it's demon excised. Got the engine totally reassembled and back in the frame. And after a lot of fiddling, I got it running! I think that was in March(ish). It ran great and I even dared to take it out for a little ride up and down our little backwoods road.

I thought this would be a good time to build the cowling, so I tried using Great Stuff:

It sorta worked, but not ideal:

So I sent the seat pan out with the tank to the paint shop. It's still there (3 months later). So it was time to tear it all back down for final(?) build:

Had the frame powdercoated:

And started to reassemble:

And I'm in the re-wiring stage so I built a battery tray and I'm working out the logistics. Wiring is not my strong suit: 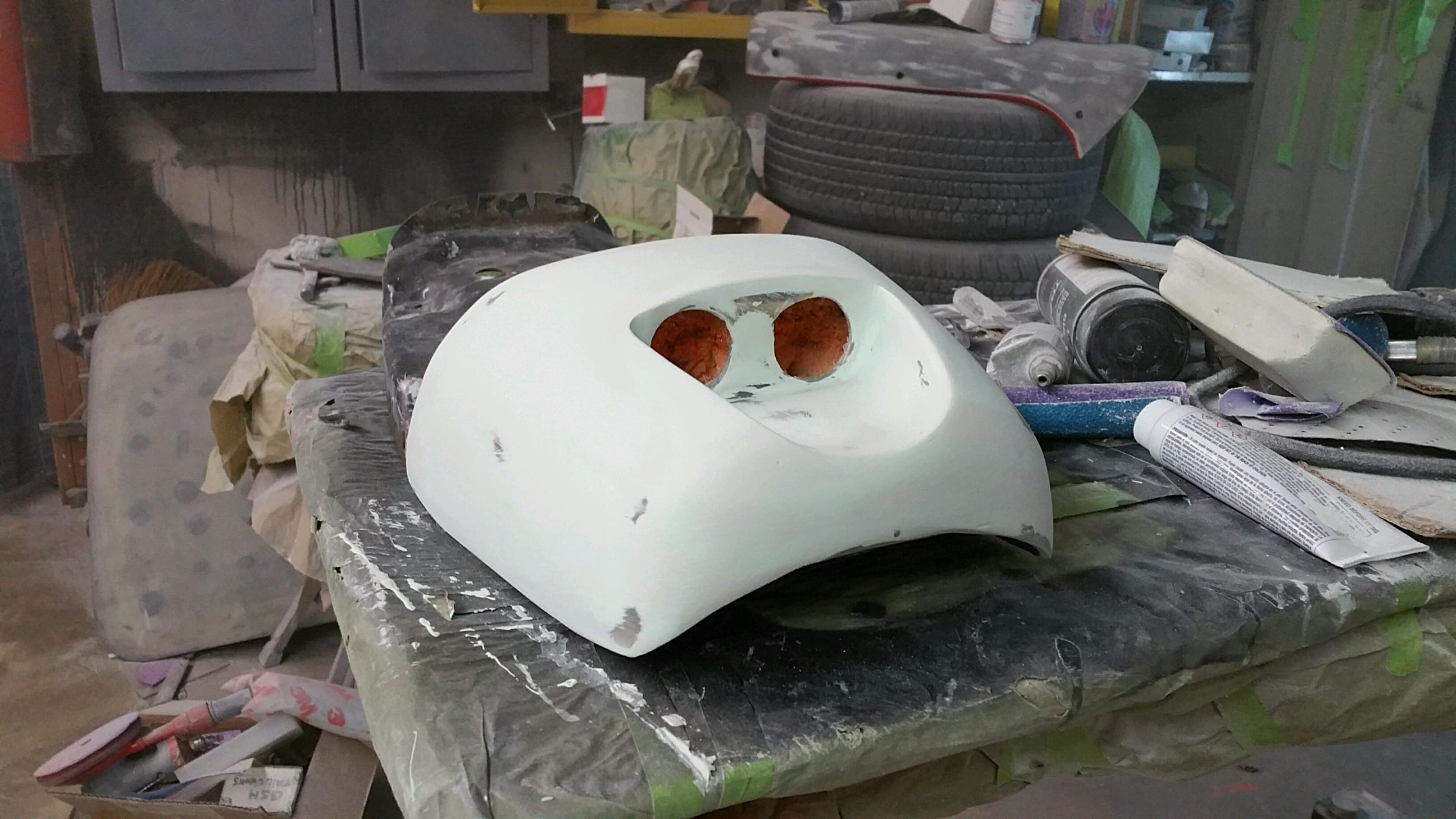 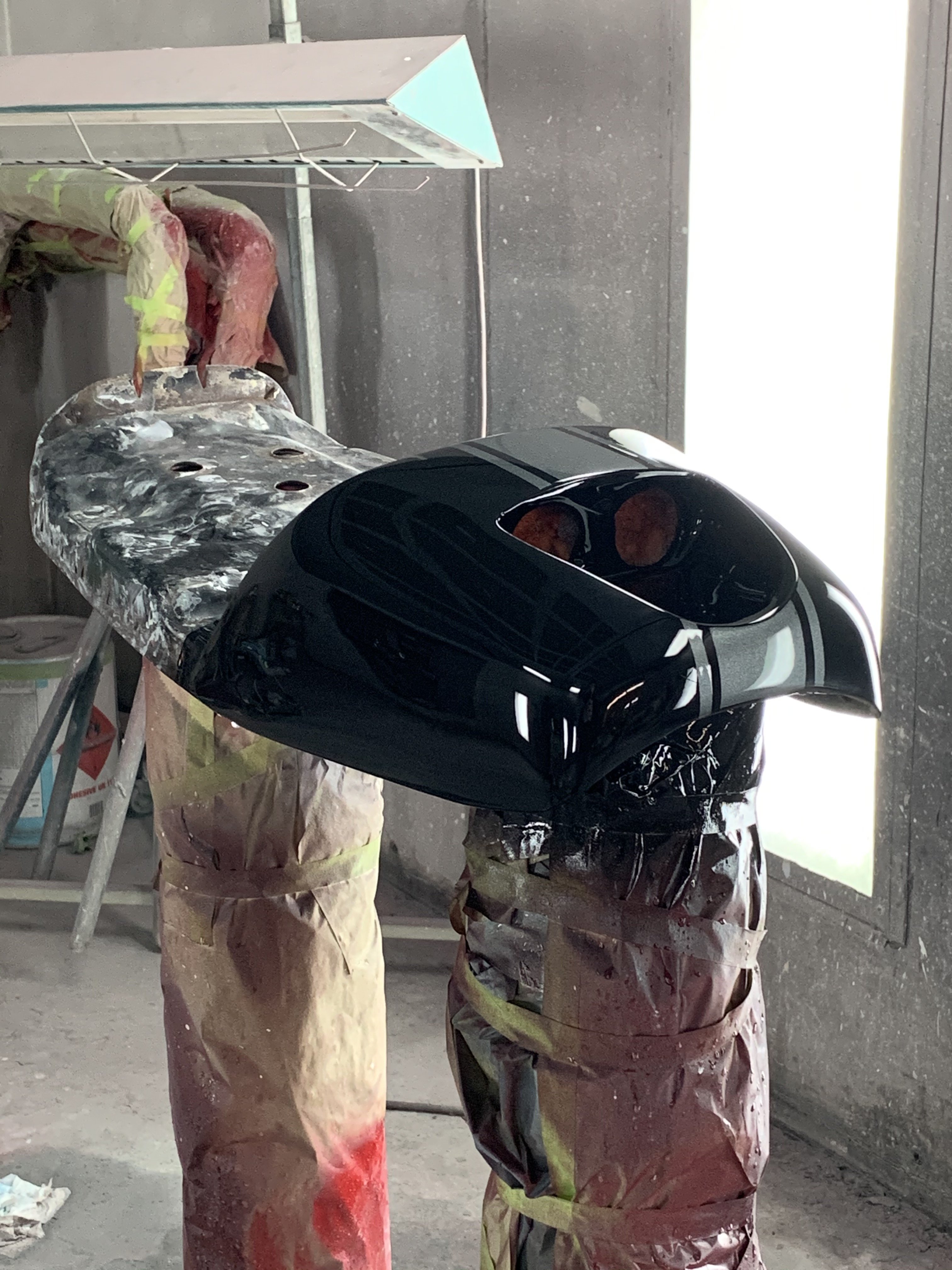 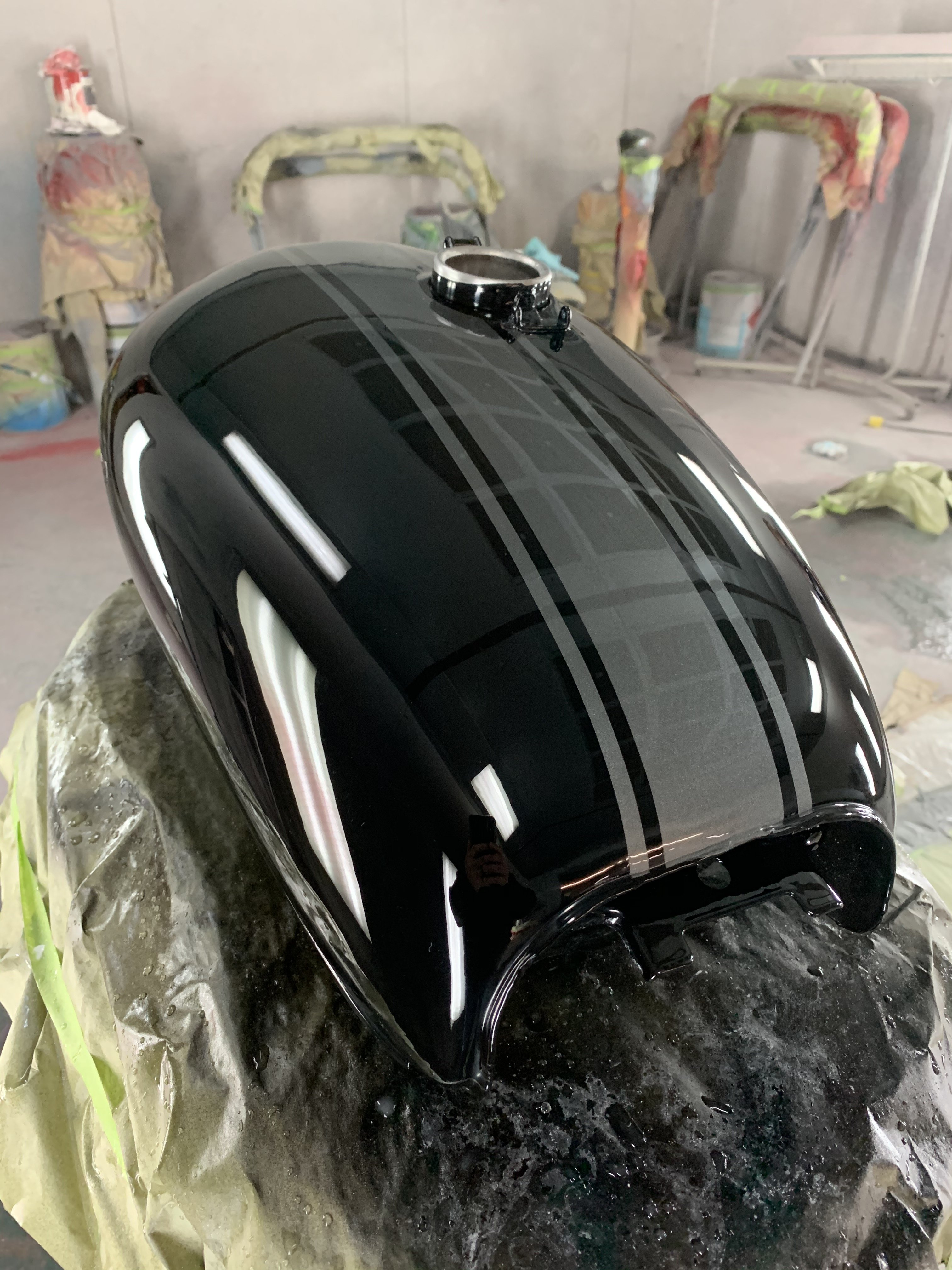 So everything is back from fab and paint. It's absolutely brilliant. 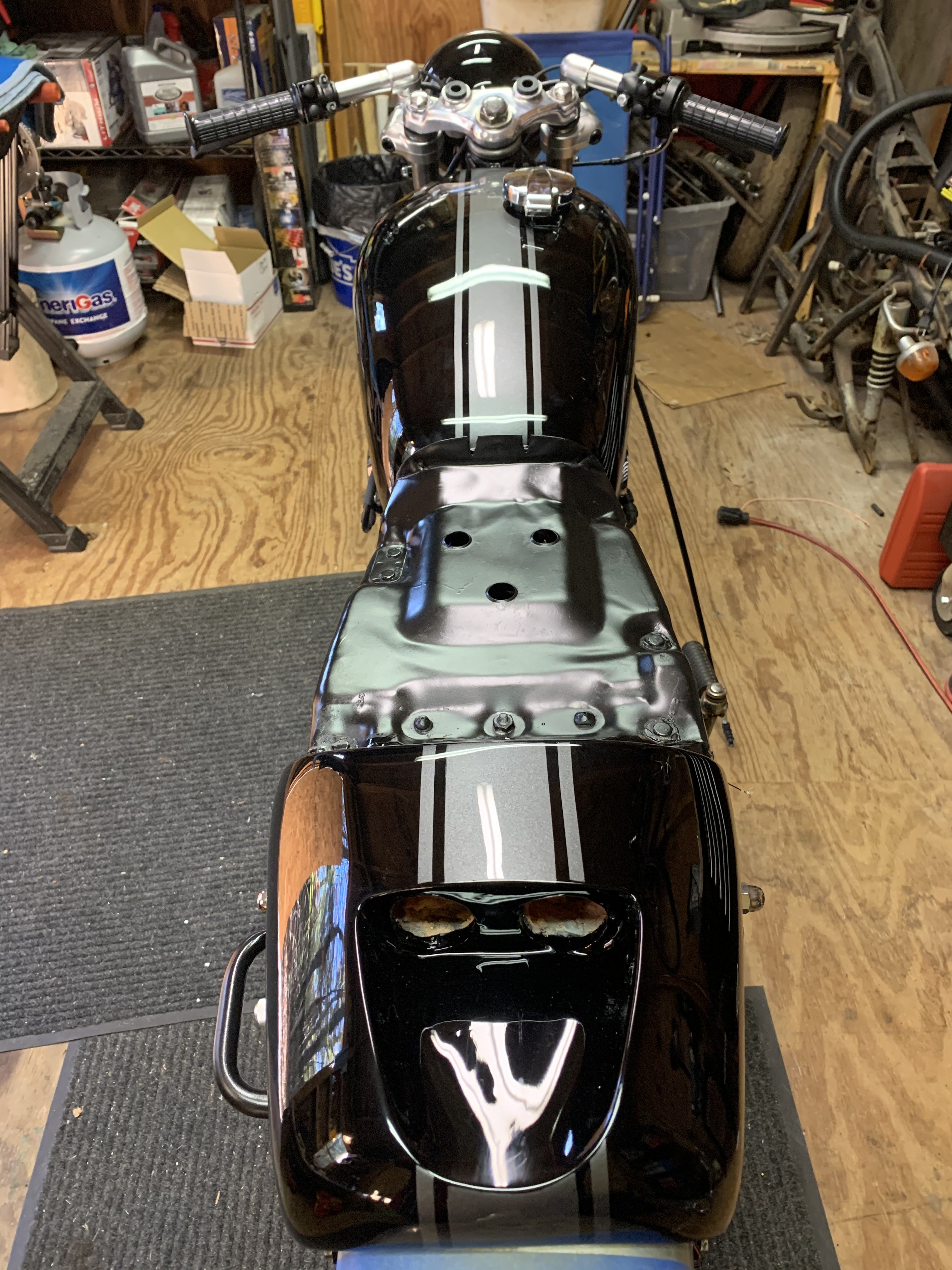 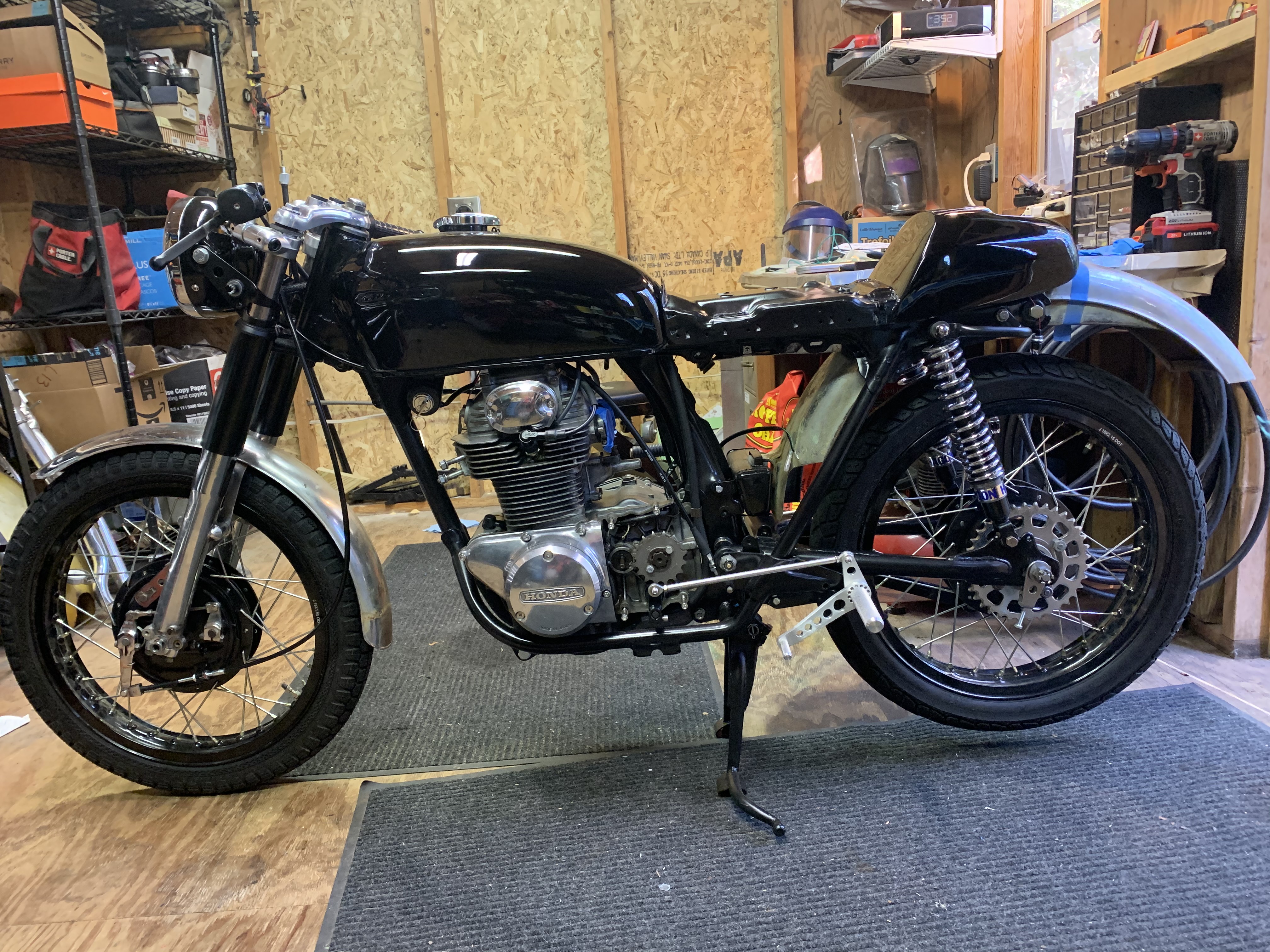 And now finishing up the wiring: 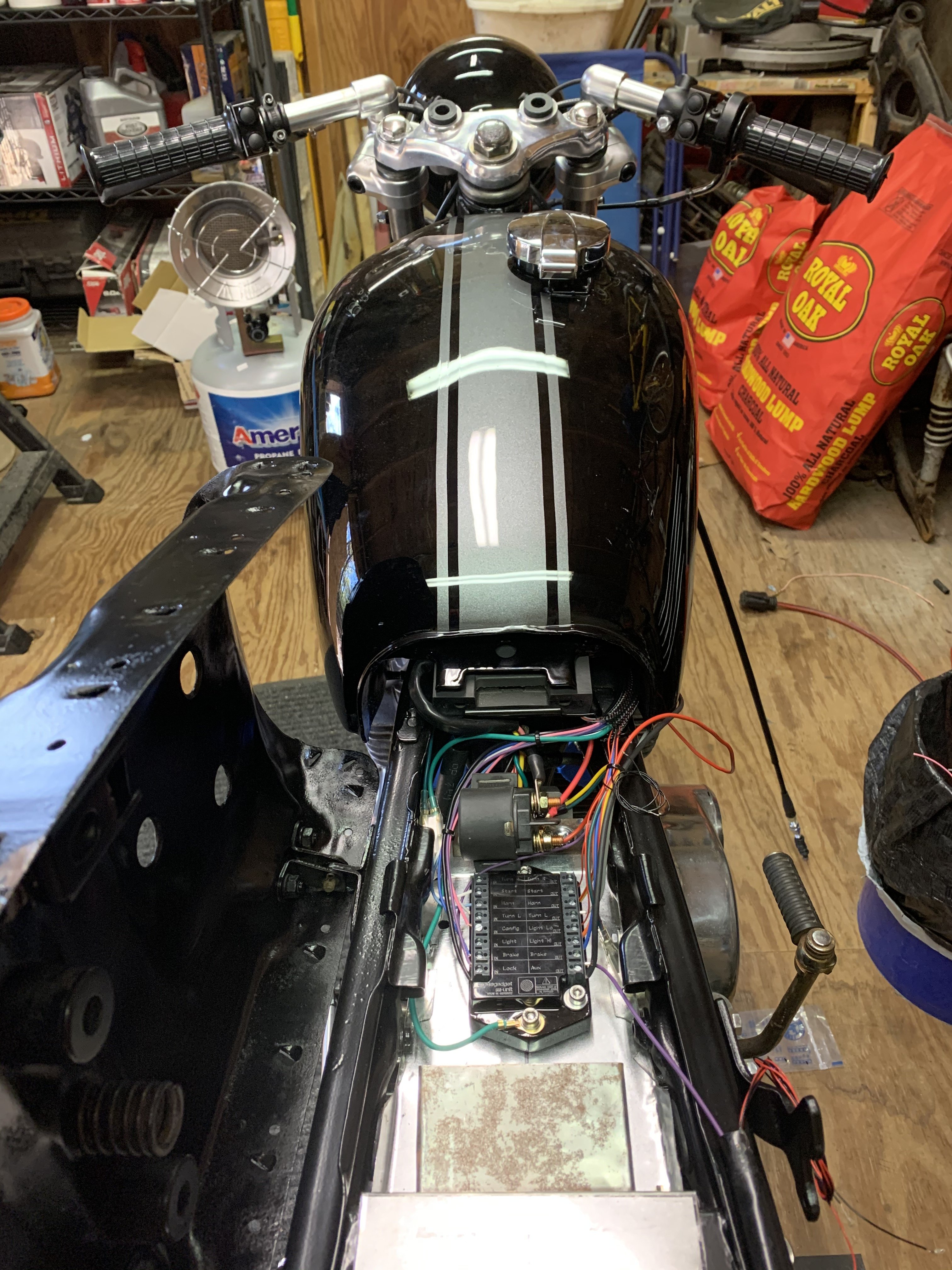