This is my first bike rebuild. Originally I wanted to buy an old truck, rebuild it, and buy a Ducati motorcycle. Instead I ended up buying a new truck, and an old bike to rebuild.

Picked up this bike out in Ft. Worth for $600. It wasn't running, and the carbs weren't even on it. The electrical system was chewed to bits too. Here are pics of the process so far.

Stuff to be cleaned/ trashed

Bobbed the rear Fender, so that it lines up flush with the frame. I also filled the holes and painted it black.

Comstar rims are now black. These may get re-done though...

Starting to look back to normal. The tank is only primed in the picture. This is my old workshop. aka a tiny ass shed...

The swing arm bolt was shortened, because the new rearsets don't bolt onto it. They go around it, and it sticks out a few inches.

Check out the custom seat. I had a friend who used to do upholstery make it for me.

The bike in my friends shop. He's going to be sorting out the engine and electrical for me. He's also fixing all the mistakes I made haha. Like repainting the tank.

Here's the engine. It's getting at least one new piston, and the cylinders are being honed at my dad's machine shop.

More engine stuff. You can see the piston on the far left that is pitted pretty badly. That is the one getting replaced for sure.

This is the end of the process as of now. I will post more as more progress is made.

Thanks. The progress has been very slow and steady for the most part. The pace has been really picking up lately, and I'm hoping it will be done by late spring. The red frame was inspired by Ducati styling of the monster series. The whole thing is going to be fairly dark with that red frame peeking out from it all. 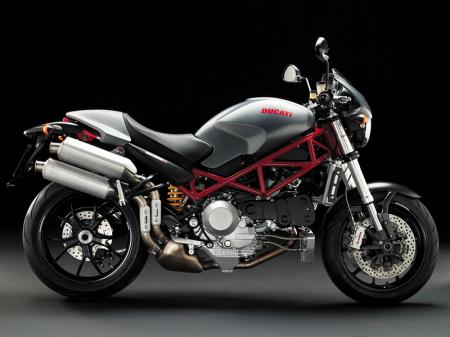 Looking good man! I love that red, damn it is realy red!

The following is waiting to be completed:

-The engine rebuild: Cylinders need to be honed. Replace one of the pistons. The ignition system is now electric and much better than the old points (I may put a new "hidden" ignition switch on). I got a full gasket set and bolt kit, and those will all be replaced.

-The engine is going to be painted black. The edges of the fins will be bare metal and polished.

-I already have Yoshimura style 4 into 1 from Carpy. It's black, and will be covered in black header wrap.

-The electrical was really bad on it. I picked up a used wiring loom in good condition for a '77 supersport on ebay for $15! Beat that... I think it is the same for the '78, but if it's not exact it will be easy to fix.

-The tank is going to be painted glossy black.

-The rims may get redone as well. They will stay glossy black, but the edge of the rim may be bare metal. For a faux white wall tire look.

-Speedo & Tach. After much debate, I think I am going to ditch the OEM ones and buy some smaller aftermarkets to replace. They're just so damn big and clunky looking up there.

-New tires are in, and just need to be put on. I went with sport touring so they last longer than racing tires because theyre not as soft. I'm not going to be doing any knee sliding anyways.

-I will be going with pod K&N filters, and ditching the old air box.

-Already have a new chain.

-I only have one side cover so far. The one that goes over the oil tank. I have been having trouble finding one for the other side.

-Suspension needs a little work, and the forks need to be resealed.

I knew I was going to have to replace at least one of the pistons, and I was thinking about going ahead and replacing all four anyways. Well, I just had my Dad and Uncle's machine shop in Houston (http://scrogginsmachine.com/) check the tolerance on my pistons, and they're all off. The tolerance is about double what it should be. So I am going to need all new pistons anyways. Next step is to find out if new set of standard size pistons will work, or if we need to go a little larger and bore out the cylinder walls to ensure proper tolerance. I hope that's not they case. They can't bore motorcycle engines in house, because they're only set up for bigger engines. We would have to send it out to get it done, and that means I'll have to pay for it.
I didn't know it had hemispherical piston heads. Pretty cool. Does anyone know if the F series are the only engines like that, or do some K models have them too?

Well I am going to have the frame, rims and some other pieces re-done. They will be sandblasted and powder coated. I'm getting a good deal on the powder coat, so I decided I should go ahead and get it done. The color scheme is going to stay the same.

The frame will be a metallic flake red instead of just a standard red. Everything else that is black will stay black. Like the rims, triple trees, etc.

The left side cover came in, and the tabs might need to be modified slightly (dremel) to ensure a proper fit.

Later on, I am considering the idea of getting the tank, rear fender, and side covers, pin striped by a professional once the bike is nearer to completion. I would like to do red pinstripes to match the frame and accent piping on the seat. Something real simple and clean. Nothing flashy. I'm going to call this pinstriper my Dad knows and see what he'll charge me.

you sure are making good progress on this. looking forward to the pinstripping too.


bikeboy said:
you sure are making good progress on this. looking forward to the pinstripping too.

Thanks. I got a quote on the pinstriping, and he said it would be about $175-200. I'll probably go for it once its put together.

I'm still waiting to find out from the shop exactly what size pistons I'll need. I'm on the back burner because they've been swamped.
In the mean time, I've been searching around for STD and OS pistons just to get an idea of where I will order from and how much it will cost. Bike bandit has the pistons, but does not carry the rings anymore. They are out of stock. I think I found a honda dealer that carries both and the pistons/rings and are actually cheaper than bike bandits. Hopefully when I find out exactly what I need, they have them 4 of them in stock. If I can't find what I need, then I may have to go with a big bore kit... I found a good deal on one from Wiseco. I don't want to bore it out because then I would need to pay to have it bored, plus also buy a new jet kit. It's just extra time and money that I don't really want to spend. I'd rather keep it close to stock anyways, because I'm not going to race it or anything...
Anyone have any ideas on where to shop for STD and OS pistons for a 1978 CB750F2?

Dude, get a big bore kit for it and be done! The 850 upgrade kit from cycleX I think it is! If you have to build it, build it bigger!


tWistedWheelz said:
Dude, get a big bore kit for it and be done! The 850 upgrade kit from cycleX I think it is! If you have to build it, build it bigger!
Click to expand...

Man, they have tons of stuff... Horrible website though. Kind of hard to figure out at first.
Why is their 850cc kit so much cheaper than the 836cc kit ($250 vs $450). Kind of makes me nervous how cheap some of their stuff sells for.
Are there any downsides to going this big? I've heard that overheating is more probable because of less metal between the cylinders, but that may be a myth.
If I went up to an 850cc would I need a bigger cam too, or would it really matter? I know I would definitely have to get bigger jets to get proper gas ratio.

836 is what you want from all of my research! Reliable and pulls like a clydesdale! This is the site that most members here and at SOHC forum recemended to me! I just have not built my 750 yet!

Ok, here's the deal. I've been doing some research on 836cc kits in an F model, and I've found a lot of people talking about it. However, I haven't found anyone that's done it. I've heard conflicting things too about what does and doesn't work and what will and won't fit.

The Wiseco 836cc kit (part# K836) fits all 69-78 CB750 K & F models... But here's the deal: 78K and 78F stock pistons have different dome shapes and have different compressions. So, how does this one kit work well for both engines? Ok yeah it fits, but will they run well in a F model? Anyone here have an F with this kit installed that can offer some advice?

Cycle Xchange offers an 836cc kit that specifically states it is for the F model, but it looks the same as the Wiseco, and has the same specs.


scroggins5000 said:
Ok, here's the deal. I've been doing some research on 836cc kits in an F model, and I've found a lot of people talking about it. However, I haven't found anyone that's done it. I've heard conflicting things too about what does and doesn't work and what will and won't fit.

The Wiseco 836cc kit (part# K836) fits all 69-78 CB750 K & F models... But here's the deal: 78K and 78F stock pistons have different dome shapes and have different compressions. So, how does this one kit work well for both engines? Ok yeah it fits, but will they run well in a F model? Anyone here have an F with this kit installed that can offer some advice?

Cycle Xchange offers an 836cc kit that specifically states it is for the F model, but it looks the same as the Wiseco, and has the same specs.
Click to expand...

Check this out. I am thinking about this kit for my F...

Check this out. I am thinking about this kit for my F...
Click to expand...

Yeah someone just showed this kit to me over at the SOHC4 forum. It looks like the only way to go for an 836 on a '78 F. Gotta see if my buddy can get it through the shop and hook me up with a discount. I'll keep everyone updated on the progress.

I've decided to fight temptation on the 836cc, and I'm sticking with stock. Basically the main reason is that I want it to be as reliable as possible. It doesn't make much sense to put a big bore kit in my bike, because I don't want to upgrade the entire engine. It would be nice, but I just can't afford all that high performance stuff. It should probably be completely built for racing, or completely built stock. Not mixed... I'd rather not take the risk, and play it safe.