DTT SUPPORTER
I love Mikuni TM carbs. Looks like it should fit the bill.

DTT BOTM WINNER
Just barely. I had to drill a couple holes forward of the stock air box mount on the frame, but it’s just enough to fit...

irk miller said:
I should’ve taken pics from when it was painted orange and green. DO THE TON
Click to expand... 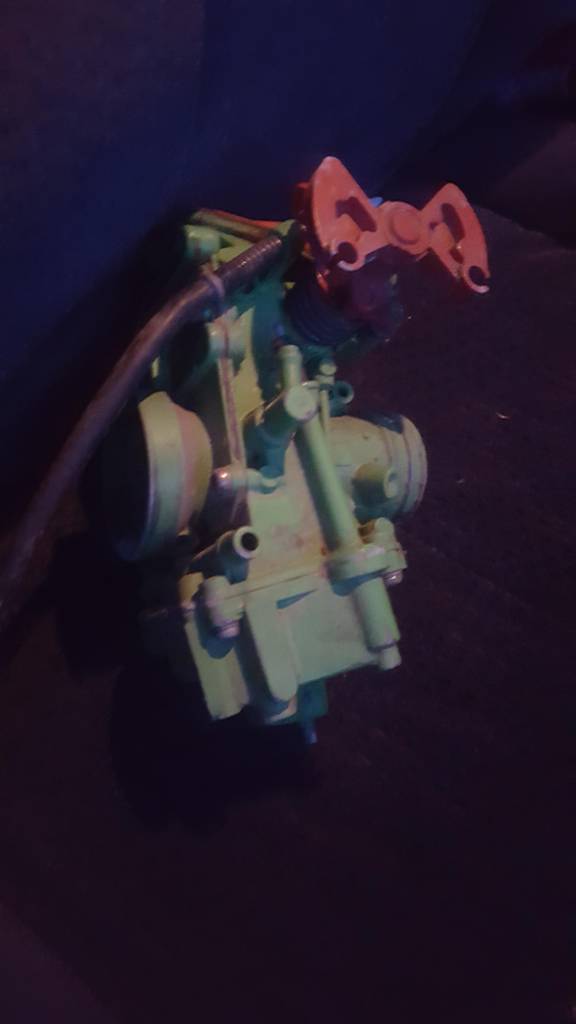 irk miller said:
The Fastenal on Washington Rd in Evans is where I go locally. I hope that's not the one that shut down. There's one in Harlem I go to sometimes, too. Otherwise, I order from McMaster-Carr. They have a warehouse in Atlanta, so bits are here by 10am the next morning. I keep stuff in stock, so I prefer to buy in quantity.
Click to expand...

Nah, there was one here in south Augusta on Tobacco Rd, but didn't last long.

Thanks for the info though.

McMaster-Carr it's gonna be.

Wow, nice work, you are quick at getting things done.

DTT BOTM WINNER
Well, the tank came in today and wouldn't ya know, it's perfect. 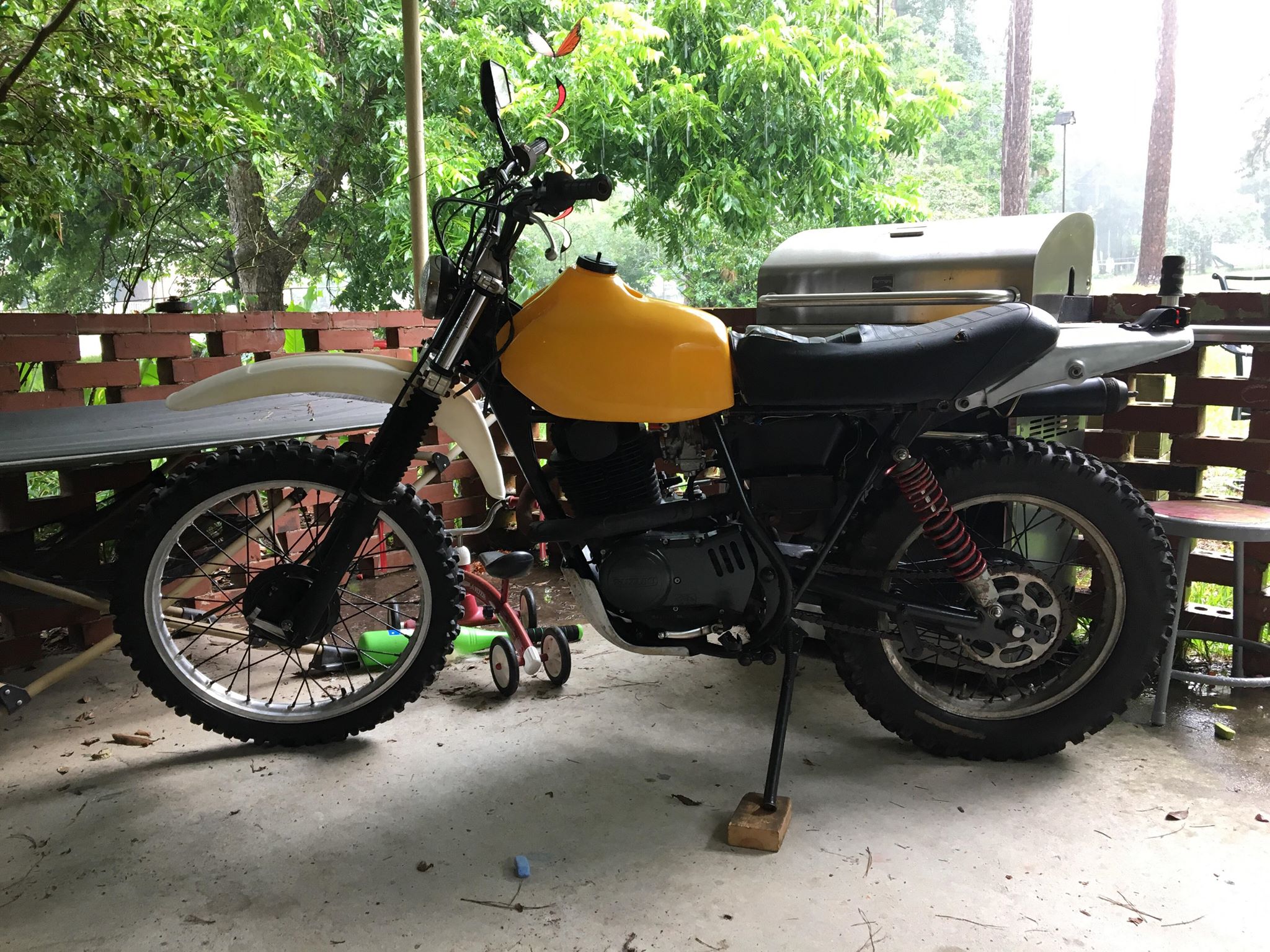 DTT BOTM WINNER
Looks right at home. I dig the rear fender on this thing.

I'll come across something like this, then we'll really have to get out and ride together.

Suzuki 370/400 is (are?) best 'wheelie' bike ever (I've had both) It's the only one I could get past '12 o'clock anytime without going all the way over. Even local cops were impressed enough to let me off with warning (after they watched me going home for 4 nights without pulling me over)

DTT BOTM WINNER
I began the process of converting the front end to RM 125 for a glorious Showa upgrade. The forks came from an Ebay seller that swears they came off a DR370. So, I'm thinking hell yeah this is going to be easy. Um. No. I mean, they're not difficult, just not straightforward. The PO of the forks clearly did some work to his triple or something to make it all work. Since I only had the forks, I had to get myself a triple. I converted the bottom bearing to tapered bearing. Unfortunately, I didn't have a race in the size I need and me being me, I decide to take a 52mm race and convert it to 48mm. I had the right bearing for the race and the RM tree. Me being me, I didn't measure the stem lengths and when I slid the RM triple into the DR frame, I realized the bearing nut would not reach the threads. So next order was to figure out how to make it work or start over. Luckily, if I kept the original ball bearing set up on top, I could make it work. So, I replaced the balls with new ones and machined the top race and the bearing nut to nestle together. I also shaved a bit off the backside of the race and the face of the bearing nut. This allowed my to get plenty of threads to make it all work. 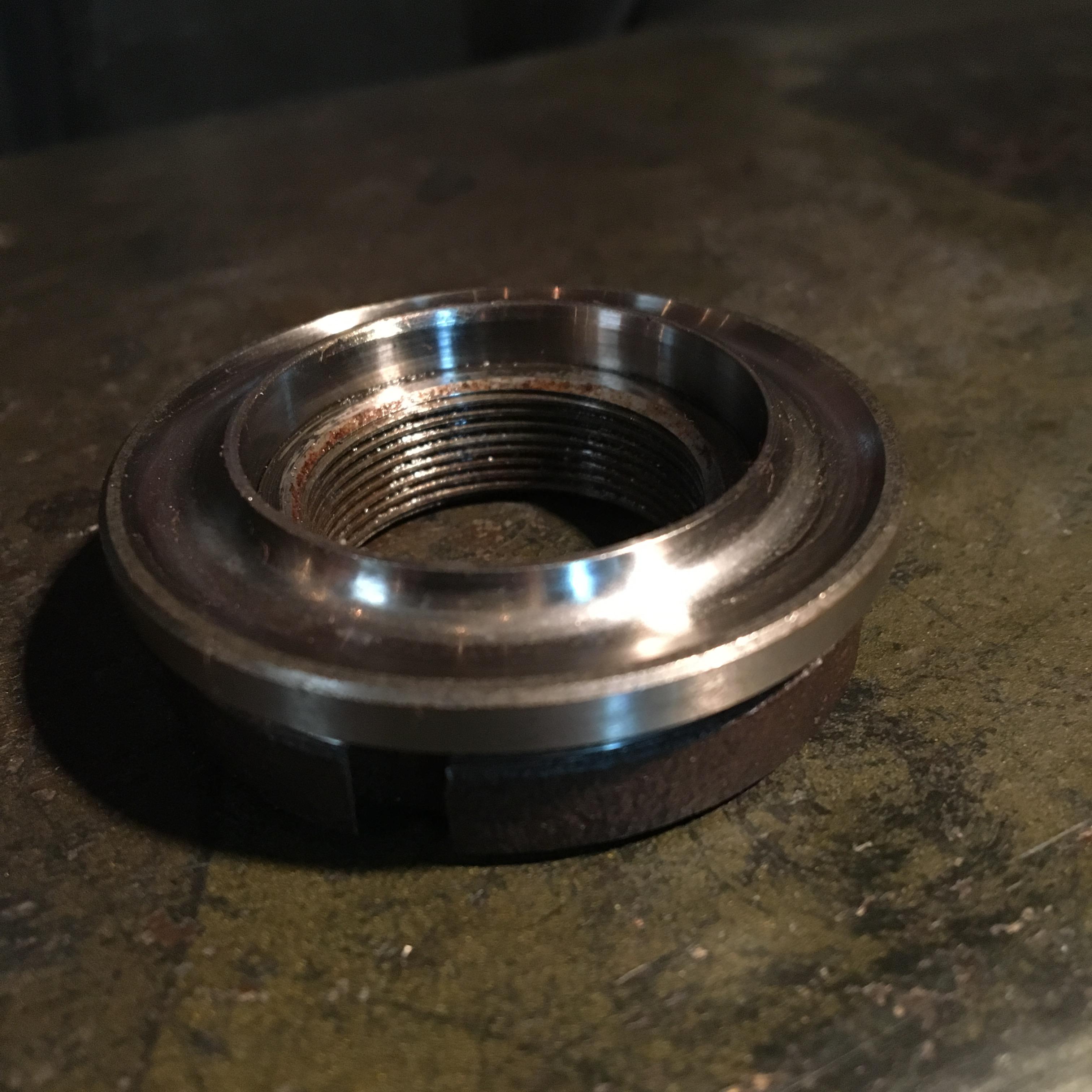 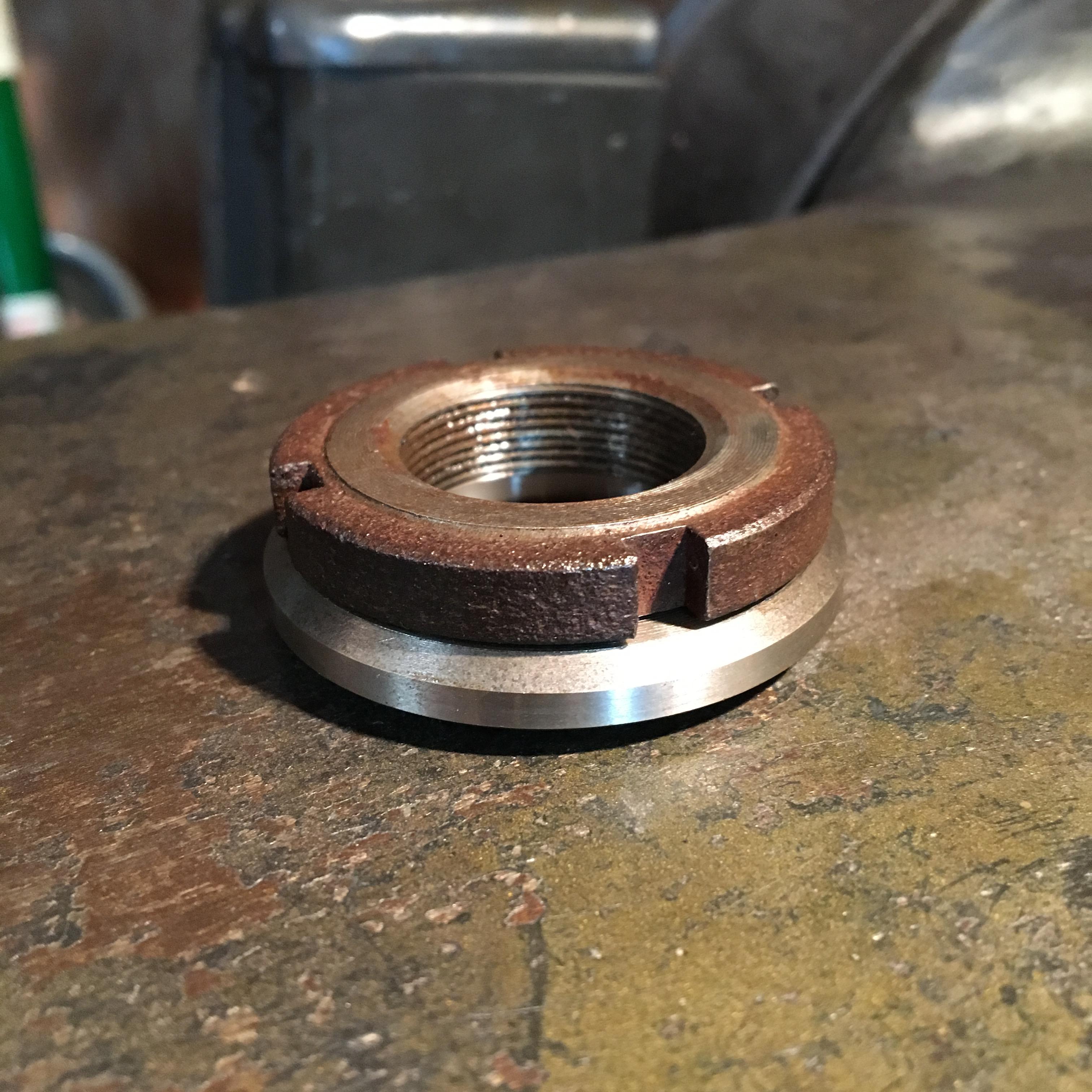 Next up is the front wheel. The RM utilizes a bigger axle, so I've ordered an RM axle and bearings. Hopefully, It's an easy swap. It won't be, so stay tuned...

DTT BOTM WINNER
Neat piece of work. You going to trim some crust off that top nut?

canyoncarver said:
Neat piece of work. You going to trim some crust off that top nut?
Click to expand...

I will. Cleaned up the underside and put it together for test fit.

DTT BOTM WINNER
Haha. Irk is trying to keep from getting kicked out of the house with all his shit.

I'm waiting on the axle and bearings to complete the fork swap, but for now I have a temporary solution on axle. I don't plan to ride it for a while, so for a roller it will do. I also got final fitment on the tank. This tank has a cool frame mount in the center so I weld a bung to the top tube and machined a plug for the hole. There's a simple bracket to center the tank in front of the seat. The seat is missing it's pocket, so it rides high on top of the bolt for the tank-to-frame bracket. That needs sorted at some point. As you can see, the ass end drags now that I added some inches with the RM forks. An aluminum DR500 swing arm is in transit and I plan to buy Progressive Series 13 shocks in 15.75", essentially fitted for a PE250. 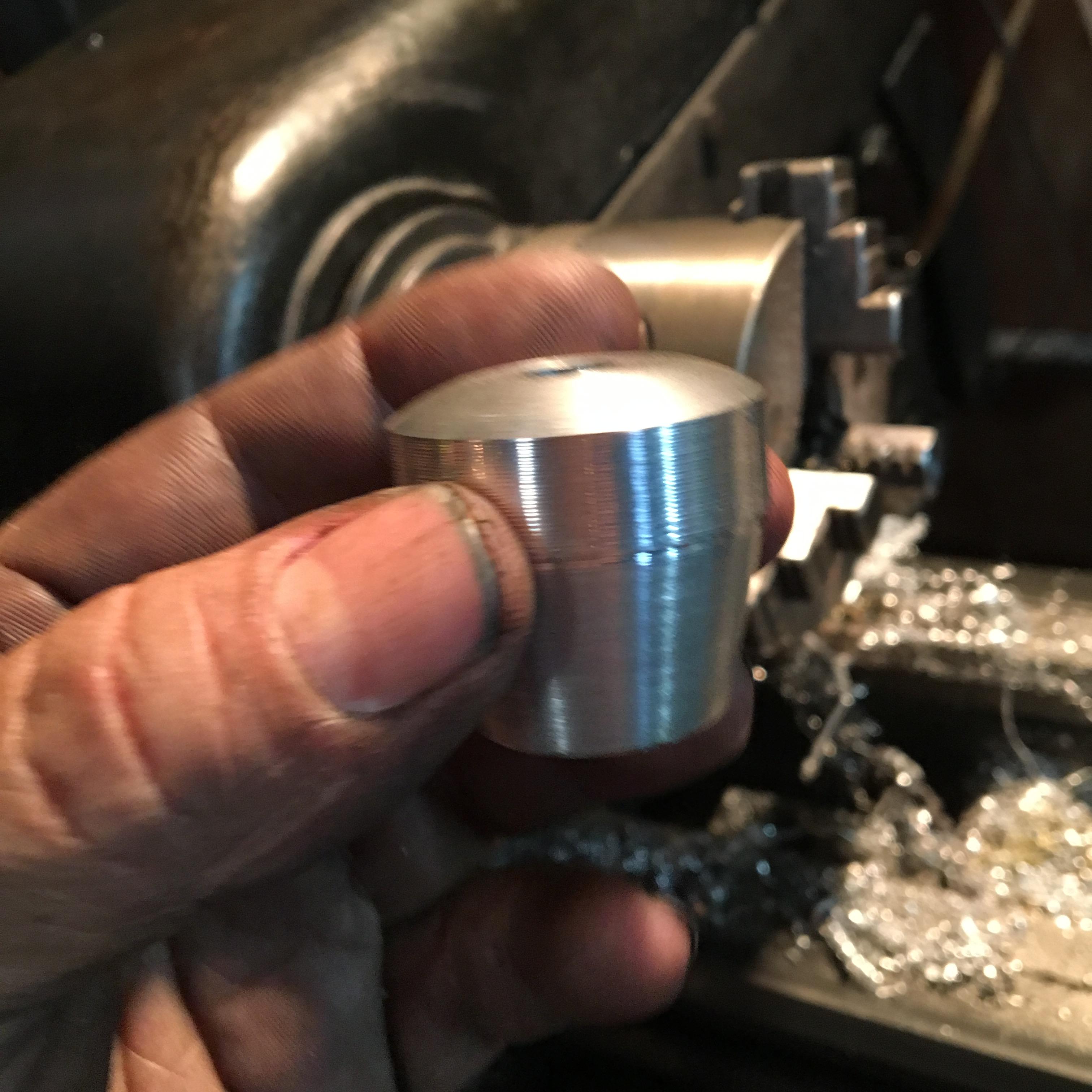 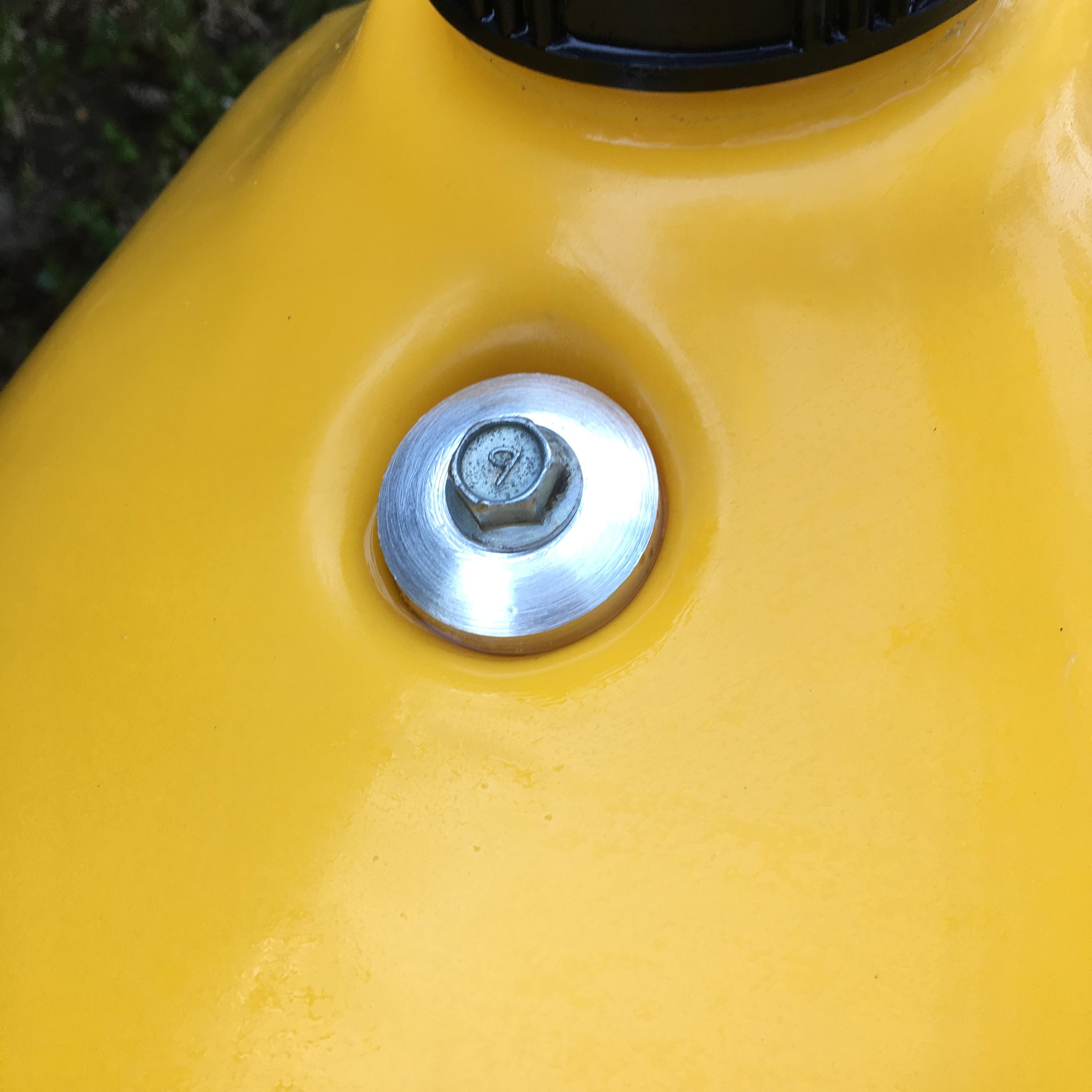 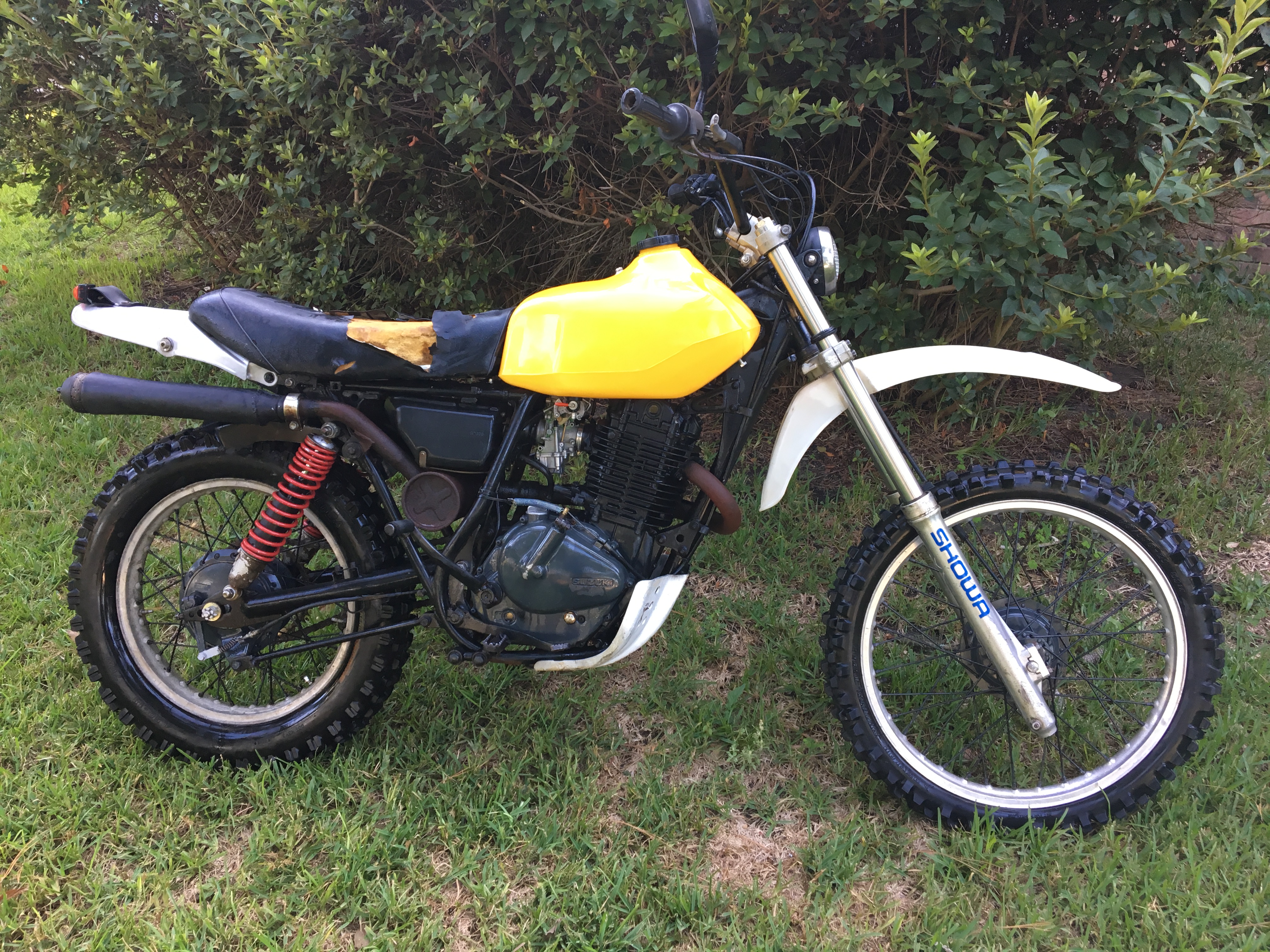 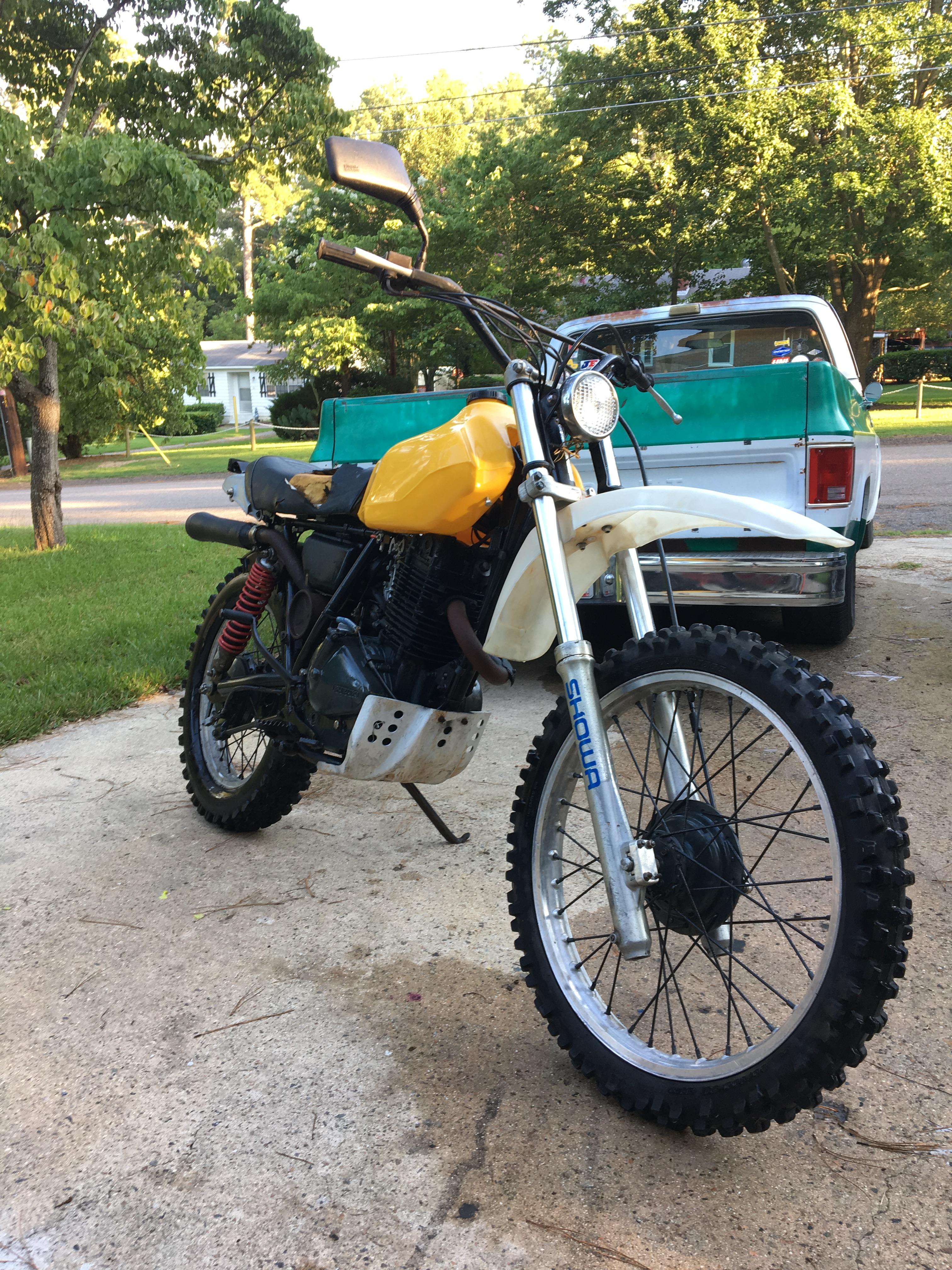 Brodie said:
I love Mikuni TM carbs. Looks like it should fit the bill.
Click to expand...

I got a good deal on a 37mm FCR. I'm having a helluva time getting this thing to work. I think it may just be too small. I can't get it out of high idle and backfire, and I'm nearly maxed out on richness for the pilot jet. Even with the slide completely closed, it acts lean. There's more to look at, but this TM is starting to be questionable. I've checked for vacuum leaks and whatnot, so it's pretty much narrowed to the carb. An old 1980 pressing of the Clymer for the SP/DR370 & 400 singles recommends a VM36 as a performance upgrade. Hopefully this FCR will do better.

DTT SUPPORTER
You might need to change the slide.

DTT BOTM WINNER
It's possible. Even likely. I have another slide from another, proven functional TM.

Cutaway is usually tiny on those for a 400. Probably around 3~4mm How much wear is on slide and body?That could be where you have air leak? I've really only worked on RMZ 250/400's though and can't remember all the problems without having carb in my hands. I know there are a few simple things that can be wrong causing high idle. Wear plates fitted backwards or upside down is always an issue

DTT BOTM WINNER
For the sake of transparency, let's begin today's post with some failure. I stayed up 'til about 5am last night fabricating a spigot for this FCR-MX carb I want to run... Everything was looking good. Got good transition to the head. Good fit between the carb and the intake. The Rotax boot was a good fit, too. I was proud. Then, I go to install the carb in the frame and lo and behold, the throttle mechanism interferes with the frame. Damn. So, back to the computer and I order a boot from Jet's R Us that will be much shorter than what I have here. Hopefully, it fits inside of the frame being at least 10mm closer to the head.

An aluminum DR500 swing arm arrived in the mail yesterday via BradJ, through Mr E and originally from Kanticoy. It's like sharing a village girl around here. I hoped the swingarm would be super easy and straight forward, but of course it was not. It wasn't too hard, though, either. Fortunately, the OD of the DR370 bushings match the OD of a 91 RM125. I happen to have the rear swing arm from a 91 RM125 that I wasn't able to sell at the last two Mid-O's. The DR500 and the 91 RM 125 share the same swing arm pivot axle dimension. So, I replaced the outer DR375 Swing arm bushings with the outer bushings from the RM. Because the RM is mono shock, it also has inner bushings. I trimmed the inner bushings down 10mm, reamed the frame plugs to match the OD of these bushings and voila, an aluminum swing arm on a DR370. The rear axle was a pretty easy fit. Some things needed trimmed to fit through the DR500 axle slots, and the frame brake cable stay has to to be moved, but otherwise pretty mundane stuff. Of note, I will ultimately weld in the frame plugs once the rest of the bike is sorted. I stayed up 'til about 5am last night
Click to expand...

I feel your pain, been there "got the T shirt". I hope it all comes good for you in the end. Great work, watching you manage so many projects and achieve sooooo much progress is breath taking. keep up the great work. (love the trike)
You must log in or register to reply here.
Share:
Facebook Twitter Reddit Pinterest Tumblr WhatsApp Email Share Link