DTT BOTM WINNER
There just aren't enough British bikes represented on this forum...so I thought I would share this.
The build is about 3/4 of the way through, but this will get the story started.
About 12 years ago I was asked to rebuild a 650 Lightning engine for the son of a good friend of mine. He said he was going to give him enough bits to put together his own BSA... and having the rebuilt engine at the ready would light a fire under his son's arse and get the project started. Well...that didn't work. The lovely rebuilt engine just sat on his workbench and the rest of the bits and pieces sat in a storage locker until last fall, when the owner Scott called me and asked if I would take on the task of putting a roadworthy machine together. He had a budget in mind, but it was more than a little low. We discussed expanding the budget and eventually settled on the possibility of getting a 'rolling runner' together before Christmas and the probability of continuing the work in the new year when things had settled down financially.
So, with that discussion out of the way, he arrived at the shop one afternoon with a truckload of parts. We plopped everything on the floor and discussed the way ahead. With a Suzuki GT750 front end to be grafted onto the BSA frame and a good handful of non-BSA equipment, I told him he was going to have a genuine Johnny Cash Special...that's when he started calling it "Sue". Anyhow, the picture will give you an idea of what I had to start with.

DTT SUPPORTER
DTT BOTM WINNER
I dont think you see many Brit bikes on here because they mostly command a much higher price than UJMs. cool project, im in.

DTT BOTM WINNER
First thing on my agenda was to get a rolling chassis together. The frame went onto the lift and the swing arm was slipped into place after it received a fresh coat of paint and clearcoat. The front end had already received some work...this too, like the engine, was done a long while ago, but didn't have the desired effect of getting the project underway. I had already modified the fork yokes and machined the stem to accept a set of headstock bearings that would work with the stock BSA frame, and the frame had also visited my favorite powder coat specialist...so since most of the tricky work was already done, putting the front end onto the frame was not such a big job. I needed to machine a new acorn nut that would lock the top yoke to the steering stem, but that was about it. Those old forks would receive a good cleaning and a new set of seals later on. The front wheel was a mess having a good speckling of surface rust, but surprisingly, after a heavy dose of elbow grease, it cleaned up very, very well...and trying to stay on budget, this was a really good thing. Now it was time to fit the rear wheel (Triumph conical hub). This too was in very rough shape, but I managed to get it cleaned up as well. After modifying the rear axle to fit the BSA swing arm and fitting a temporary spacer to fill the space left by the missing speedo drive, the machine now had two wheels and was looking less like a truckload of parts and more like a motorcycle. The very same day, a new set of shock absorbers arrived and were immediately fitted, giving me a rolling chassis.

DTT SUPPORTER
You had me at Johnny Cash
T

Sent from my SM-A530F using Tapatalk

Anyone that follow the tubes.. this guy does some really nice things on old school Brit bikes. https://www.youtube.com/user/BritanniaMotorcycles
No flash nor bullshit. Just an old school enginer/mechanic bringing things back to life.

looking forward to watching you walk the line with this one...

DTT BOTM WINNER
With the frame and wheels on the bike, Scott showed up to have a look and announced he had another front wheel he would rather use, he said the first one was slated for another "water buffalo" project and this one had drilled discs...I offered to just change the discs, but he wanted the whole wheel swapped, so that's what I did. With the wheel off, I decided it was a good time to clean up the fork tubes and sliders and fit those new seals. He wanted me to try fitting a set of Triumph headlight mounts. I won't bore you with the details, but it didn't take too much fiddling to get them to work out. I found a used headlight shell from a Commando restoration I did a few winters ago...the chrome was crappy, but a good coat of paint on that and on the headlight ears and it was time to slip the front end back together (with Commando rubber gaiters)...I found a front fender that would work, but would end up replacing it later on. Now to fit the engine... with a little extra muscle power from a friend who dropped out for a visit one day, it went in fairly uneventfully. The owner had picked up a kit of mounting hardware for it, so that saved some time...although there always seems to be one missing, or too long, or too short. The engine had been regularly rotated a couple of times a year and when I peeped into the cylinders with the fibreoptic scope and all looked lovely and clean, but too bad that that those nice polished aluminum engine cases I had spent so much time on had gotten all corroded from sitting in a damp shed for 12 years. Anyhow, they had to come off to fit the missing stator coil and an ignition system....I would clean them back up then.

DTT BOTM WINNER
After the engine was in, it was time to fit the carbs...these ones are PWK 32mm, originally intended for use on my own Yamaha 650. Anyhow, it's a long story, but I never used them (that lovely looking kit turned out to be the most expensive set of air filters I ever bought ) After hanging on to them for a year or so, I wound up selling them (at a considerable loss) to Scott to use on this machine many years ago. After some head scratching, I decided I could make a pair of adapter plates to go between the engine and the rubber spigot. Using 3/8" aluminum plate. I incorporated an 'O' ring seal to go between the plate and the engine and tapered the inlet bore in the plate itself to match up between the carbs and the engine intake ports...in the end it all bolted up nicely...a good solid mount for the new carbs.

DTT BOTM WINNER
Swap meet time rolled along and a couple of suitable fenders were found...the rear one is original BSA, but had been painted. However when the paint was chemically removed, lo and behold there was a perfectly serviceable chrome surface underneath! The front fender is from an unknown donor bike...it's stainless steel, with good solid mounting brackets. After an exhaustive search of the internet, I could not find out what it came from...my closest guess is a Bridgestone 350...it appears I have lost the photo; I'll post one later. I got around to fitting the alternator stator and rotor along with new clutch friction plates and polished that primary cover back to where I had it 12 years ago. An electronic ignition system was fitted (against my advice) and the right side engine cover got a good polishing as well. The tail light assembly was an absolute mess...it had broken off at the lower bracket and instead of performing a proper repair, some misguided soul had welded a 1/4" thick piece of steel plate to the bottom to serve as a license plate holder. This mess was removed and a proper repair was done, I failed to take a 'before picture, but in the end the assembly was cleaned painted/ polished and put in place. I also did a little machining to make up the missing timing covers and even fiddled around with a little acid etching on the ignition cover.

DTT BOTM WINNER
The mystery fender...I thought it might be Kawasaki, but no. Like I said, my best guess is Bridgestone, but I'm really not sure. Got the oil tank installed and the wiring harness fitted.

Johnny would be proud, it's indeed "One piece at a time". 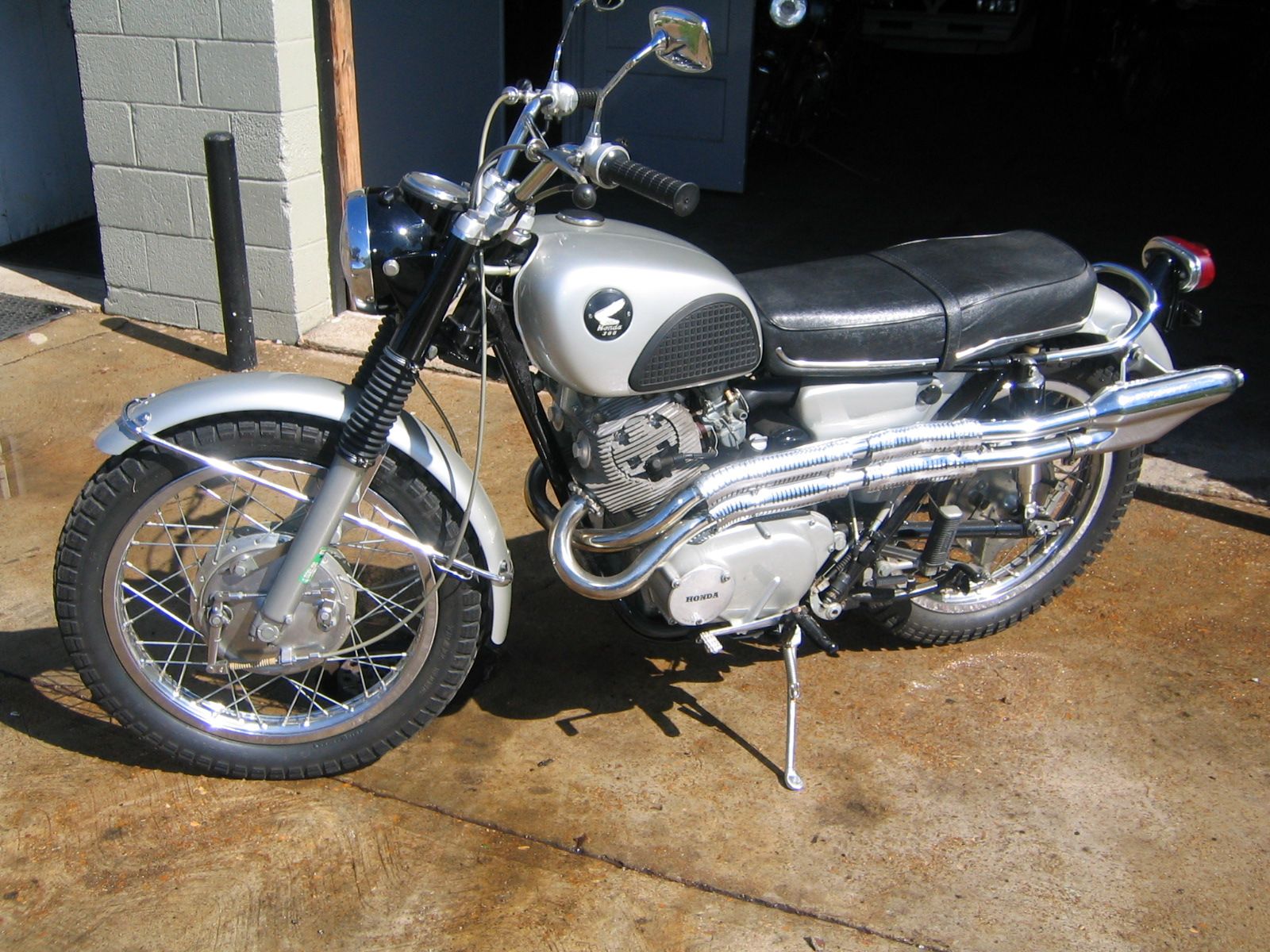 Whatever it came off of, the fender suits perfect!

DTT BOTM WINNER
Ok. so with the wiring harness installed, it was time to fit the instruments and exhaust...a couple of items he could have picked up at the swap meet, but declined to do so. Digging deeper into his wallet, we located and purchased a new set of exhaust pipes and mufflers. The addition of a 'kick-up' section gave the whole lot a nice sporty look. New instruments as well. I had been too tempted prior to this not to try running up the engine, so it was brought to life with just the old exhaust pipes fitted... it was loud for sure!

DTT BOTM WINNER
Got the seat all tidied up and fitted a new seat cover...this one is made of "grip vinyl" (whatever that is)....resembles black suede with blue stitching that will match the paint, which is currently a work in progress awaiting clear coat.