so I'm starting this "build" thread most the way through a project. I just didnt feel like taking pics while i was making progress, so i never had any content to post. anyway, here's the first incarnation:


This thing started as a bone stock, clean as hell bike with 6,000 mi on it. It was my first bike. Now its a caffeinated '74 cb360 w/ dual headlights, clipons, custom rear sets and linkage, no mufflers and 4" baffles in the head pipes, starter deleted, caferace.com seat, late 90's street bike tail lights flipped upside down and glassed in, relocated the electronics and batt to under the seat, and K&N pods. I took off as much unnecessary stuff as possible (center stand, most of the orig brake lever, cleaned up the frame tabs, shortened the rear hoop, etc). I got maybe 6 or so rides out of this stage while burning through 3 or 4 batteries. 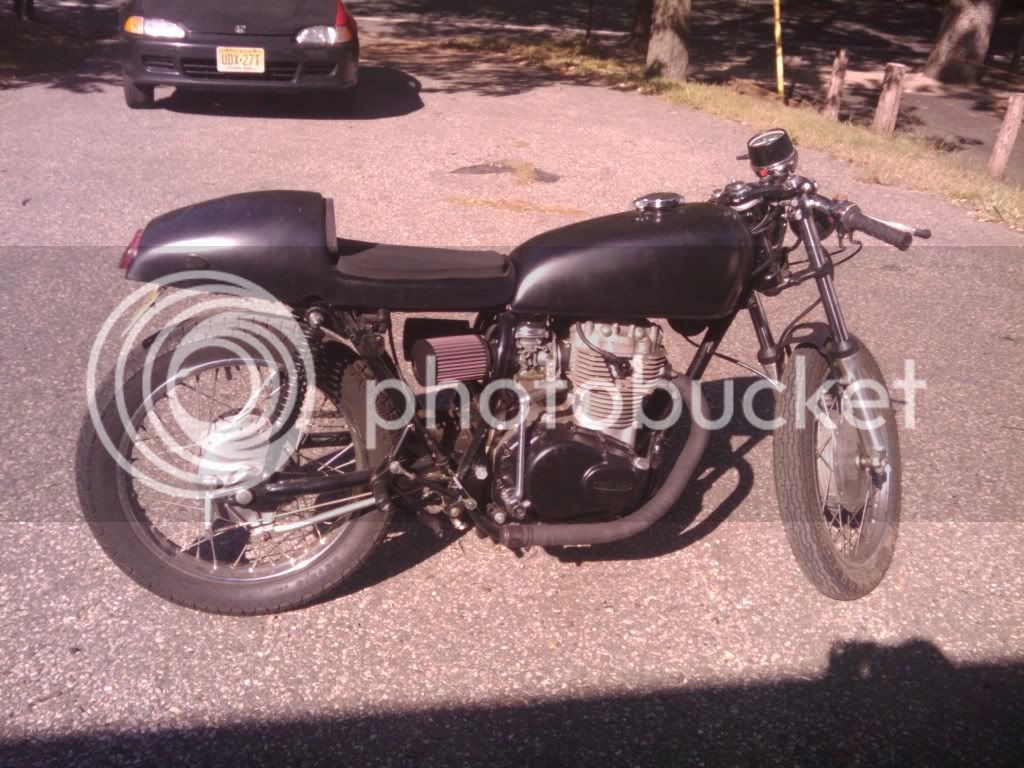 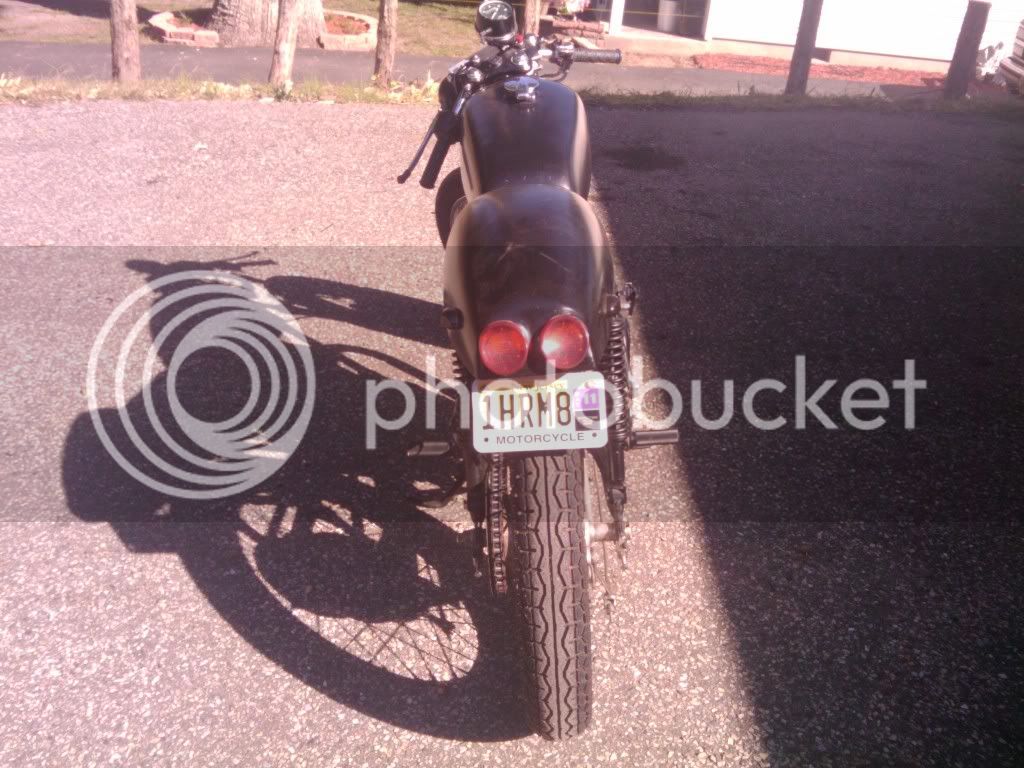 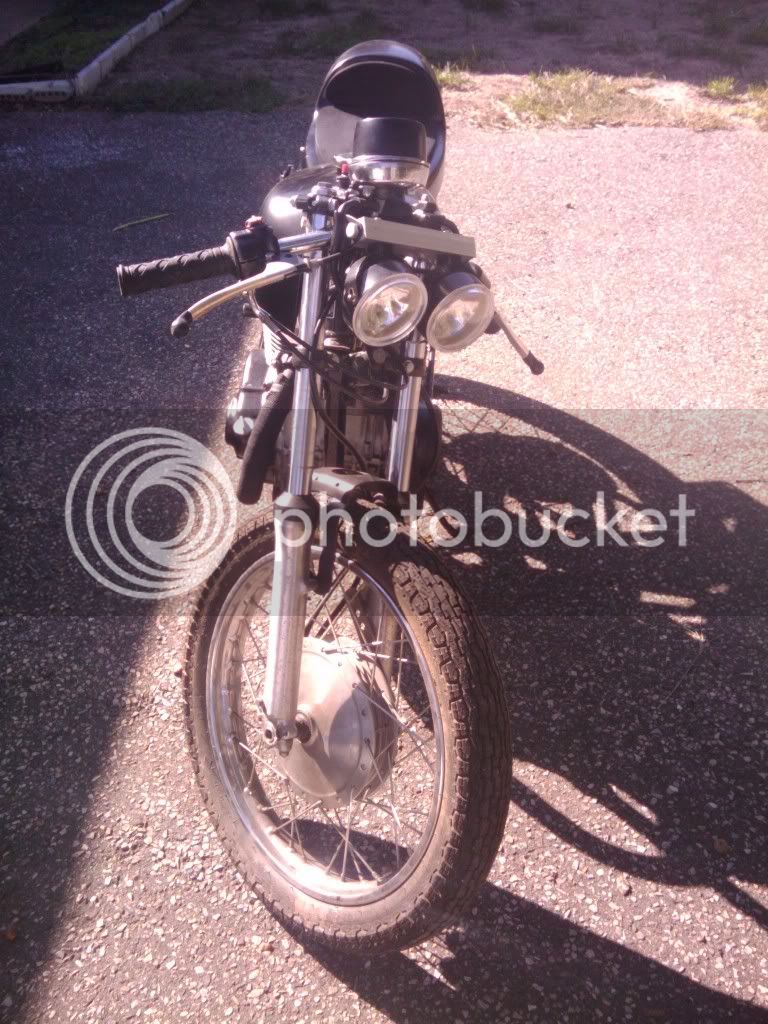 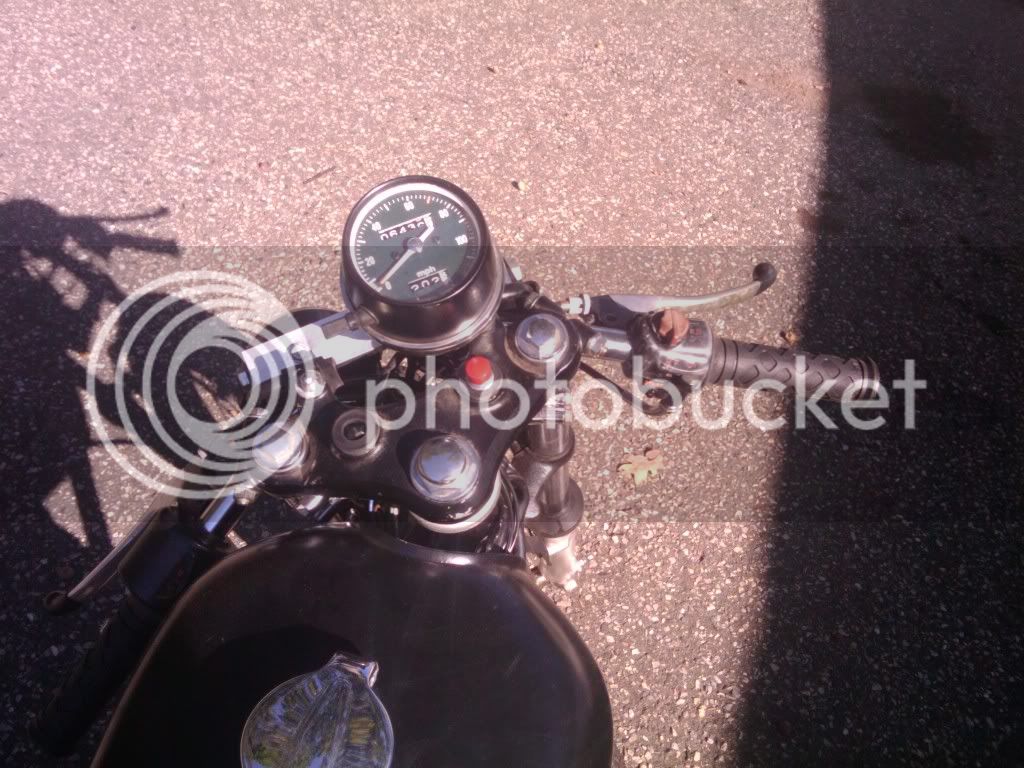 This one was before I learned about the different light settings on my camera phone (I'm an idiot): 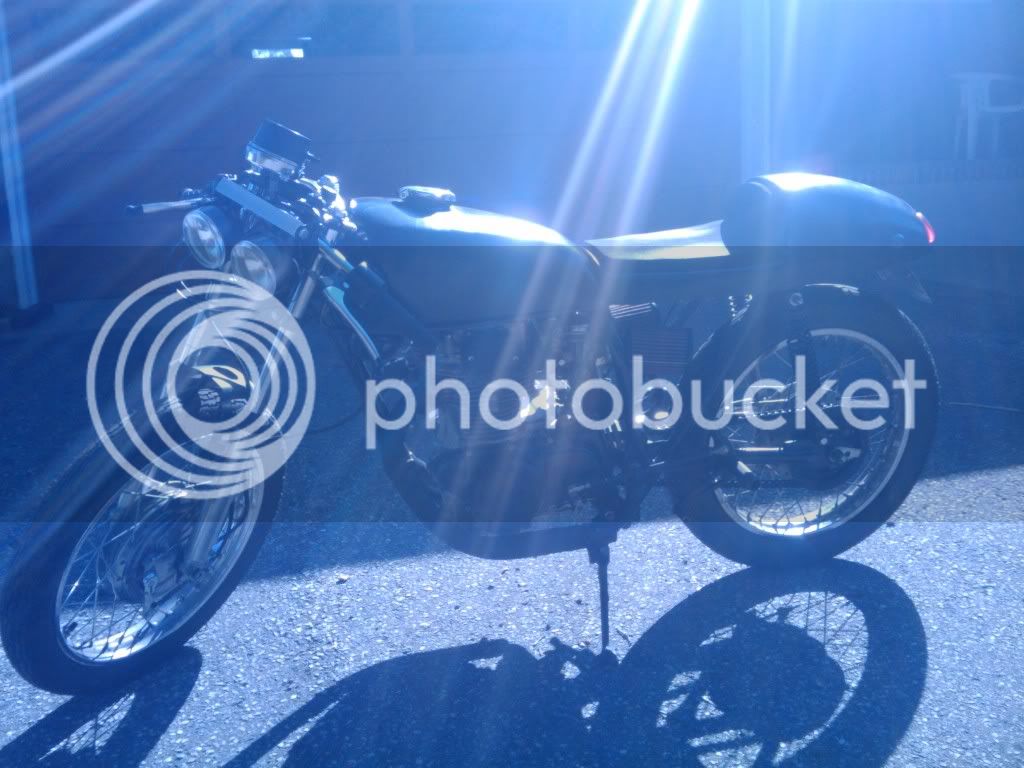 and these are before the case covers got a paint job: 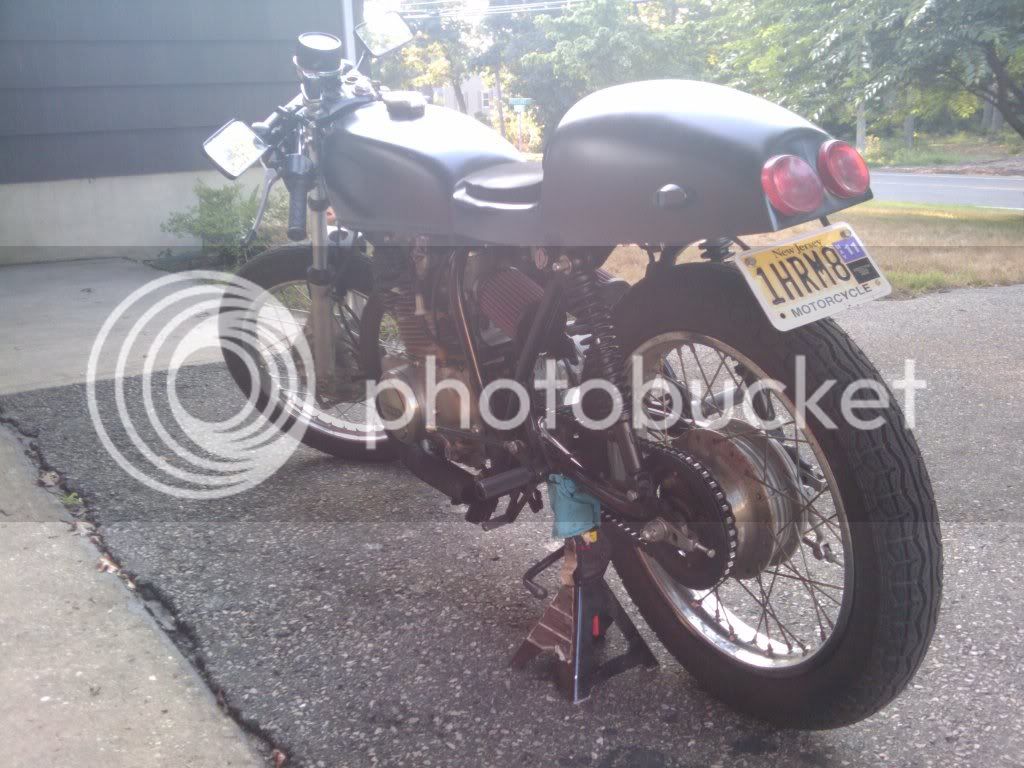 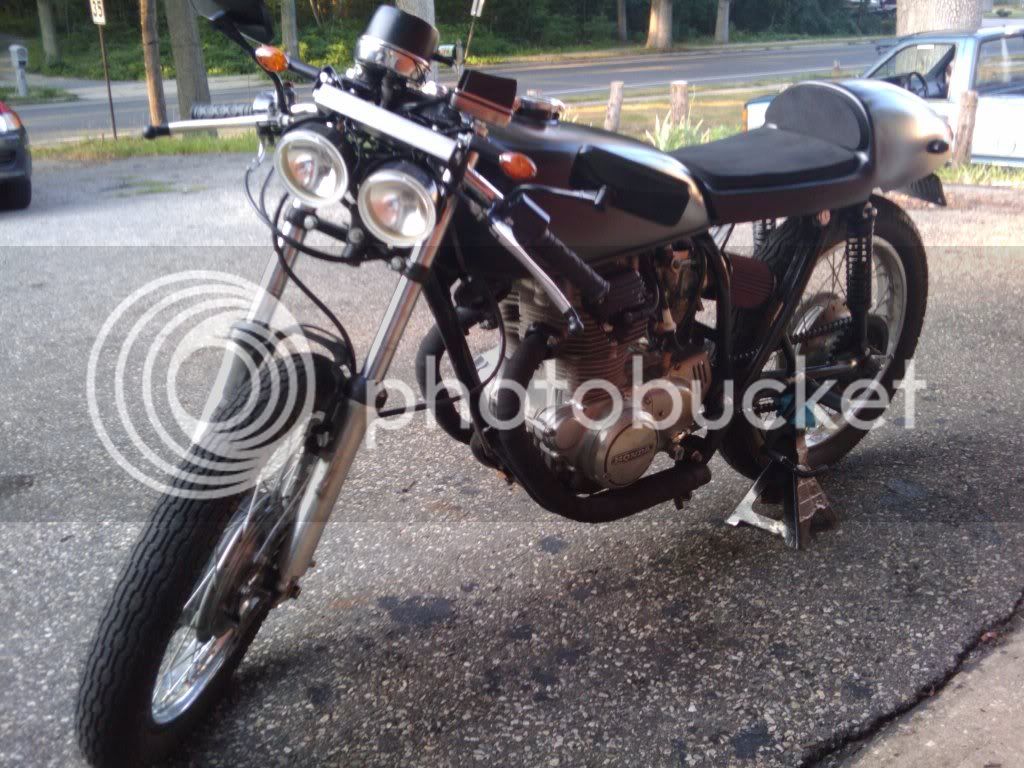 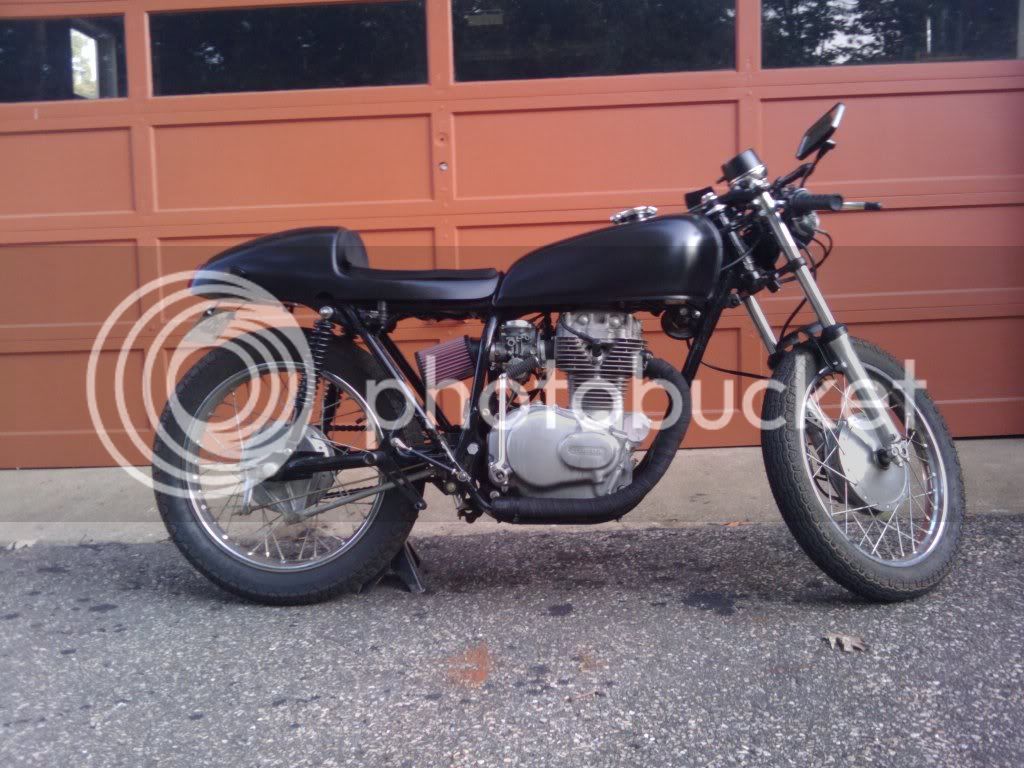 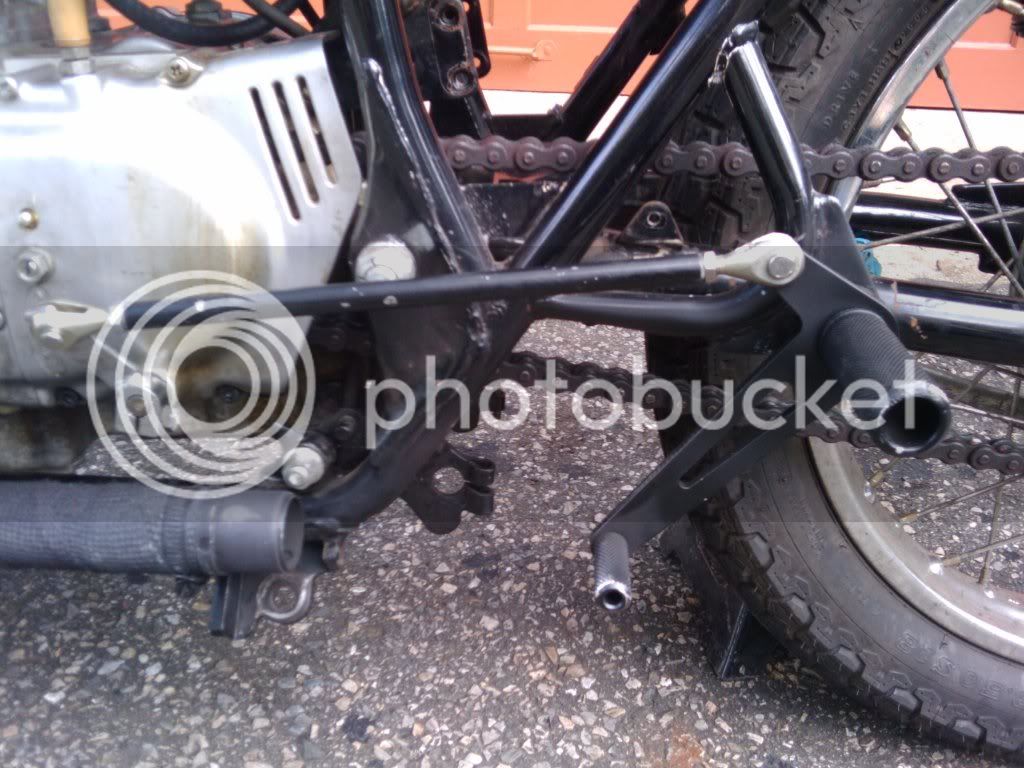 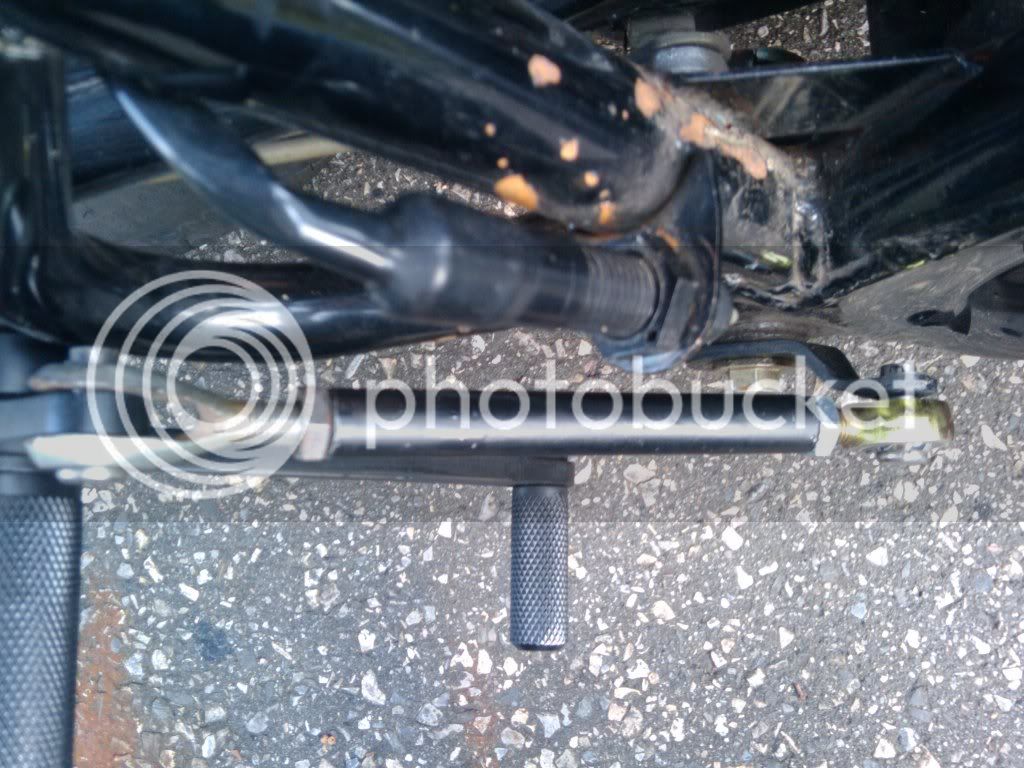 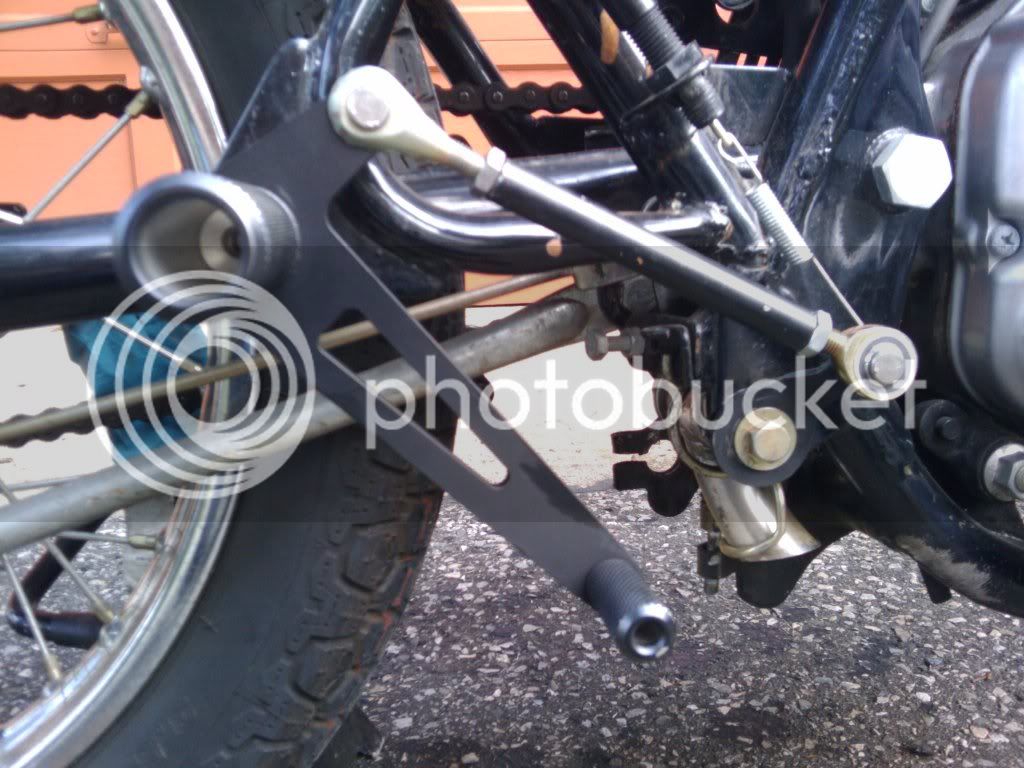 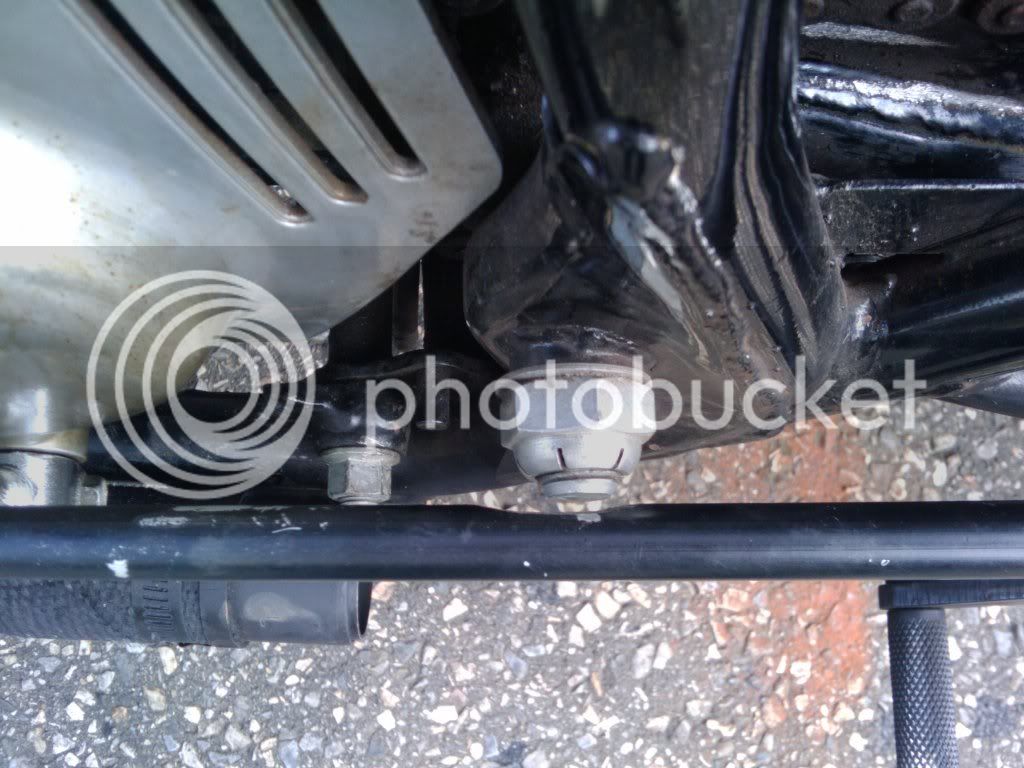 a vid of the first time i started it up in like 4 years (I think thats the best she's run yet, actually):

And nowadays she's sporting a much improved (both aesthetically and functionally) front end off of an '02 CBR954RR (thanks to some allballs bearings). I'm still kind-of in the middle of this part. a friend of mine is redoing all the wiring because i was so fed up with it that I was about to drag it into the street, drench it in gasoline and light it up. so i figured now would be the perfect time (while he's doing that) to do something I've been wanting to do for a while: 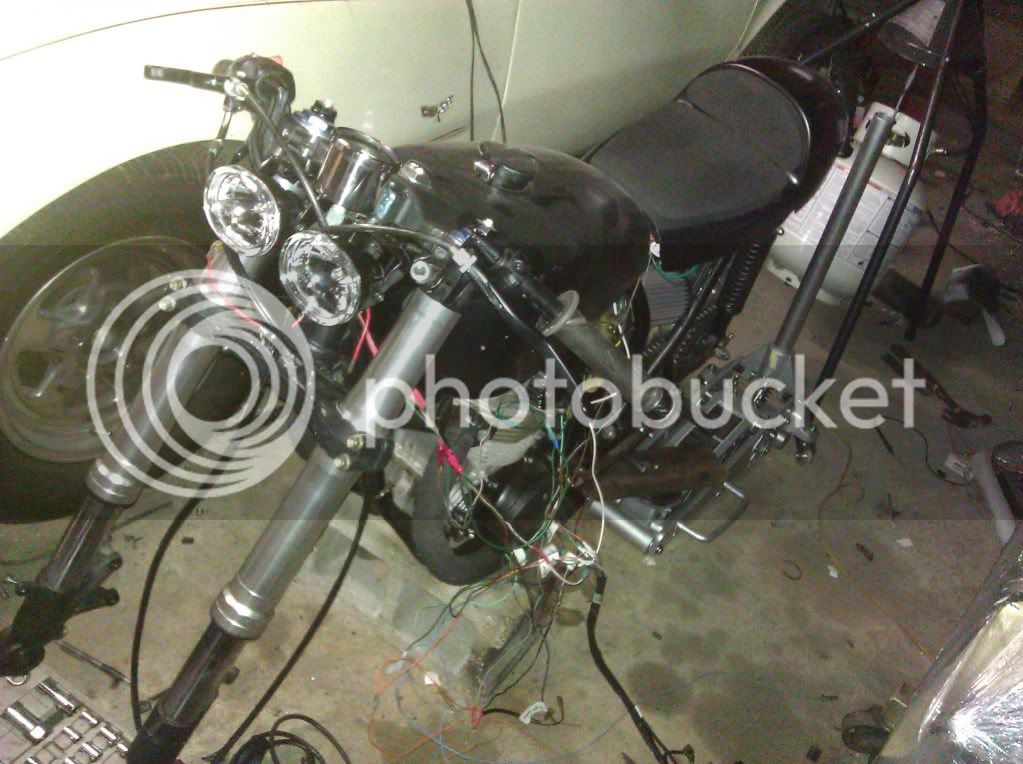 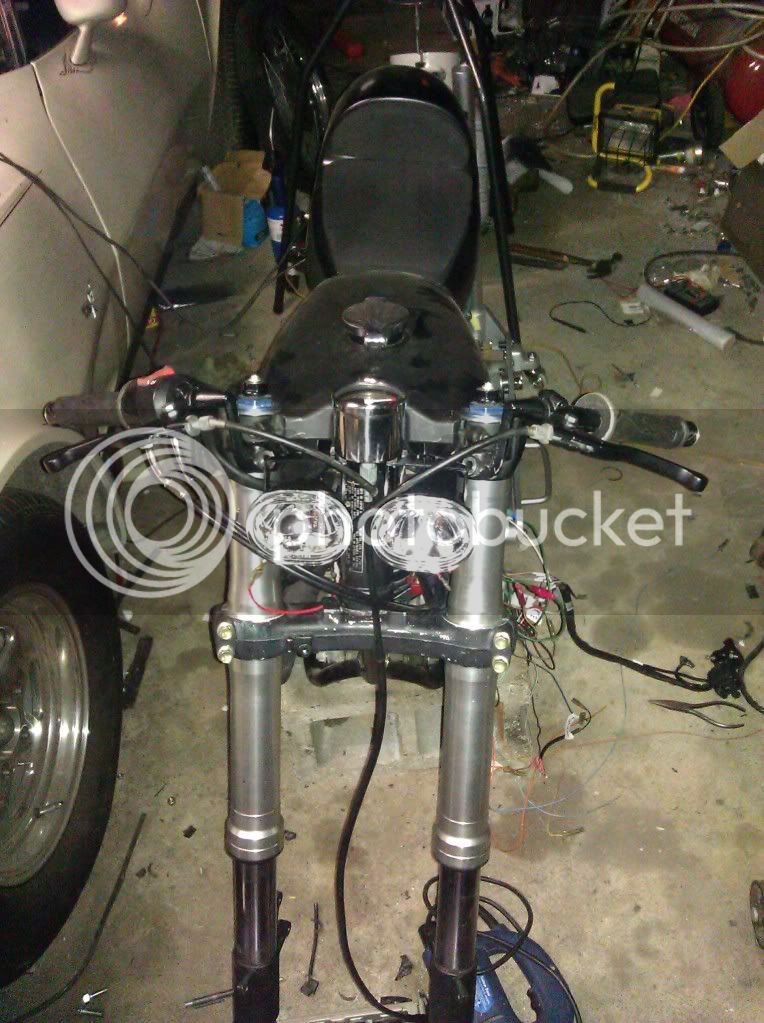 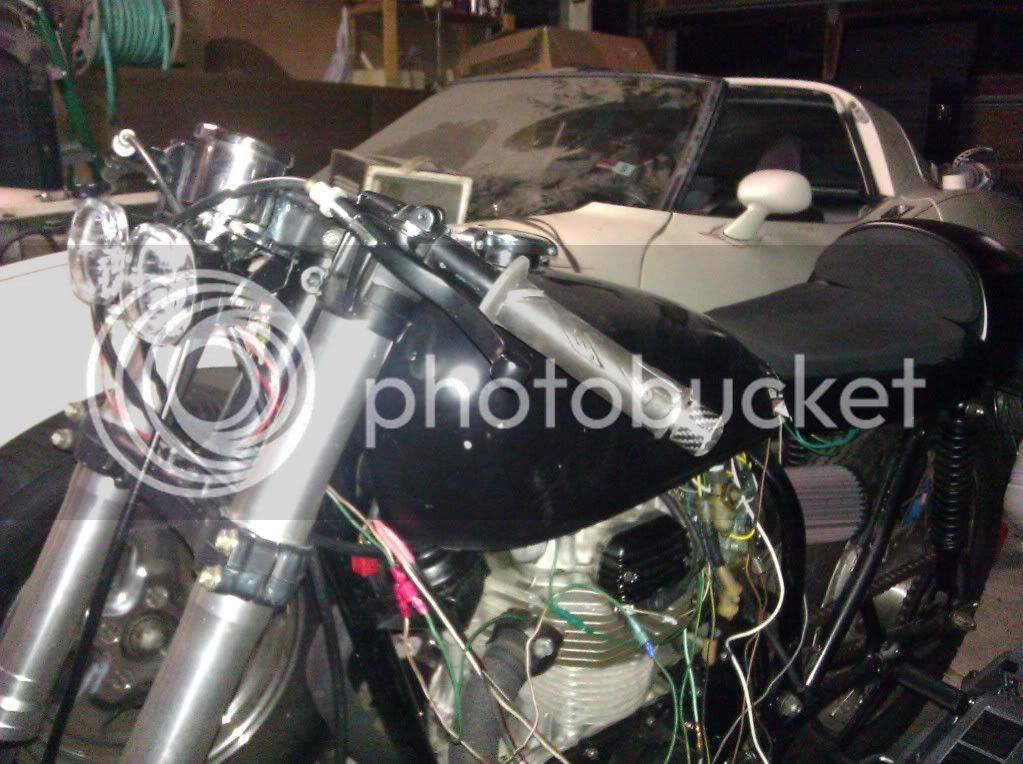 I just mounted all that stuff tonight. finally got the spacer i didnt know i needed from all balls, got the forks on (my friend already wired them), made the HL/speedo bracket (speedo's going to be painted black tomorrow) and mocked everything up. I'm waiting on my machine shop to mill/drill/whatevermachinetheyreusing out my stock hub so I can fit the wheel back on. that should (operative word) later this week. oh, and I replaced the stock horn with the stock horn from my '78 corvette (seen in last couple pics). that should be better than the anemic one that was on there.
for the record, I hate the new headlights. not the lights themselves, but their position. they need to be lower; inline with the shoulder of the tank. then I'll decide if i actually hate the lights themselves. might just go back to the old lights I had on it. gatta see what works and what doesnt.

I think the new lights are a little too small given the larger inverted forks i have now, so I put the old lights back on. I lowered them as much as I could (like), which also brought them in closer to the forks (dislike). I'm still not sure about the whole lighting situation. The mounting bar and the speedo were painted black so they wouldnt stand out as much, and I installed my steering damper. 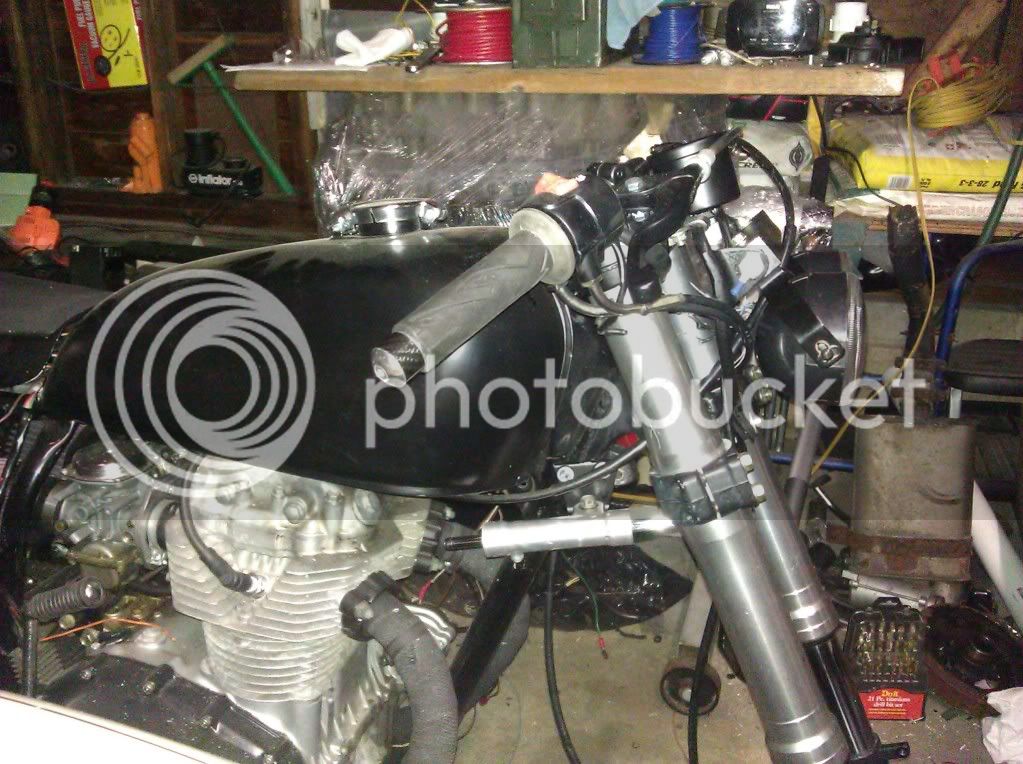 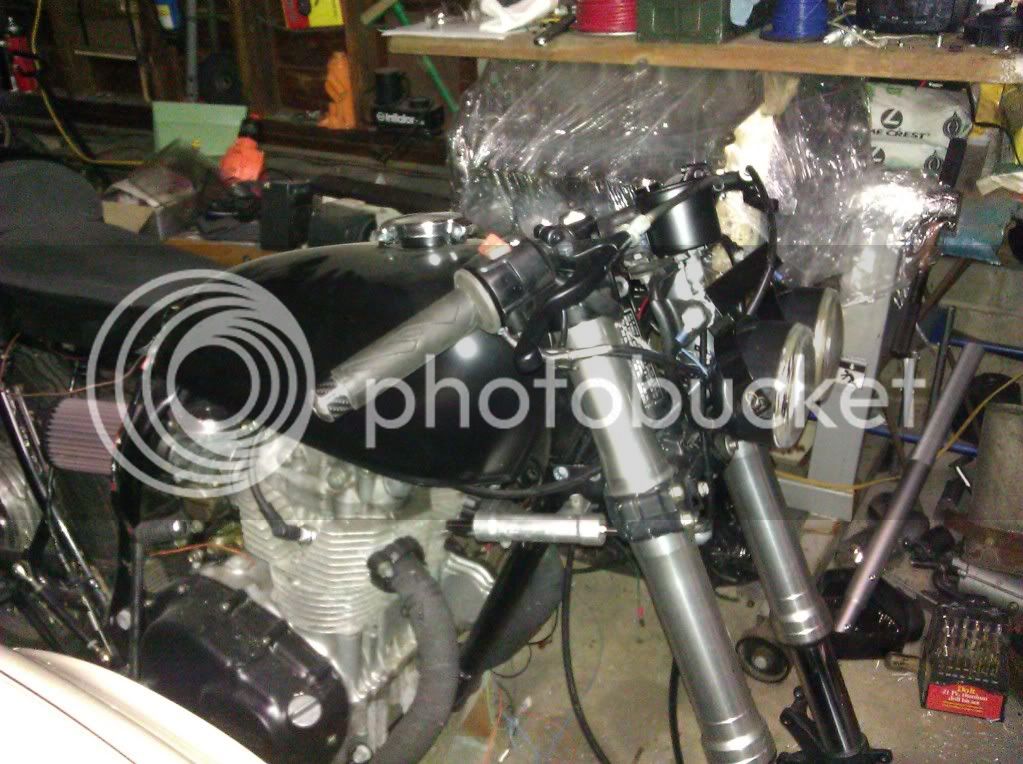 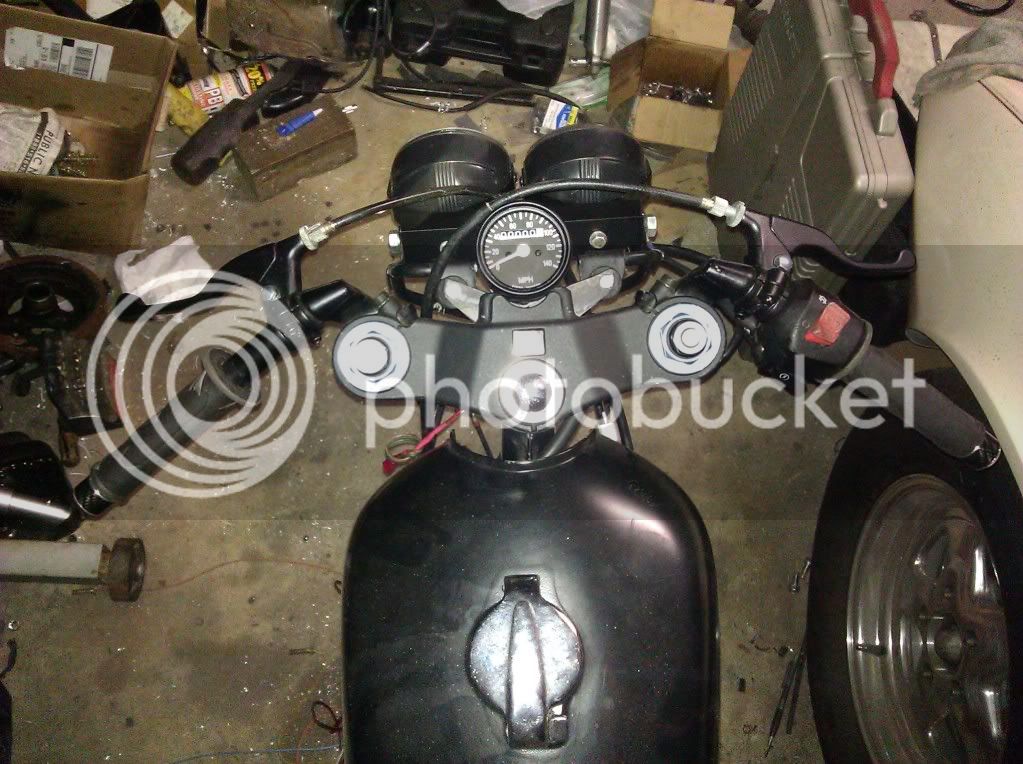 closest to a whole bike pic i can get in the garage at the moment: 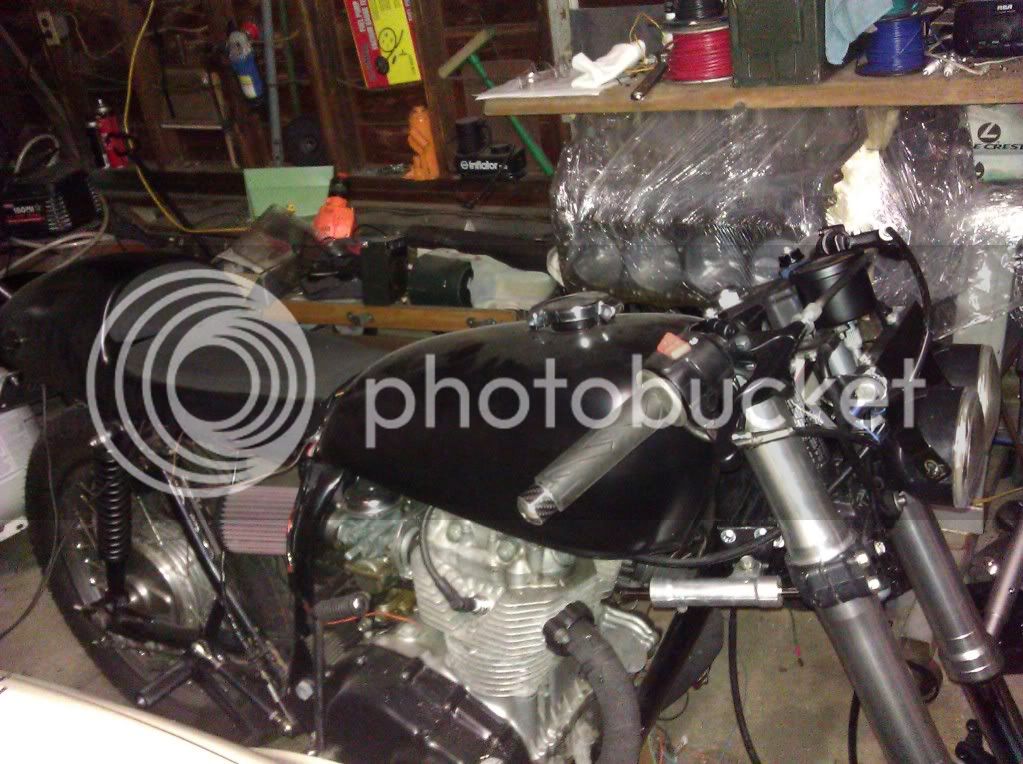 I'm not ecstatic with how this whole front end is looking. I think the clip-ons are too high, that and Im not satisfied with the lights yet. the only thing i like are the forks. Oh well, back to the drawing board.

Ok, so this bike hasnt ran well since i tried to switch over to led lights. also, it stopped charging the batt. a friend of mine was being arrogant and said he could get it to run in a day, defined as an 8 hour work day. well it took him at least a full work week of time, and he had to rewire the whole bike, but he did it. He got the charging system working and the LED lights, too. Im ecstatic. It dropped a cylinder after a while, but we put a spark tester on that side and it was getting good spark, so I guess its an excuse to upgrade to vm30's, lol.

I think i found a way to mount the lights in the position I want using some u-bolts and aluminum stock I had lying around. 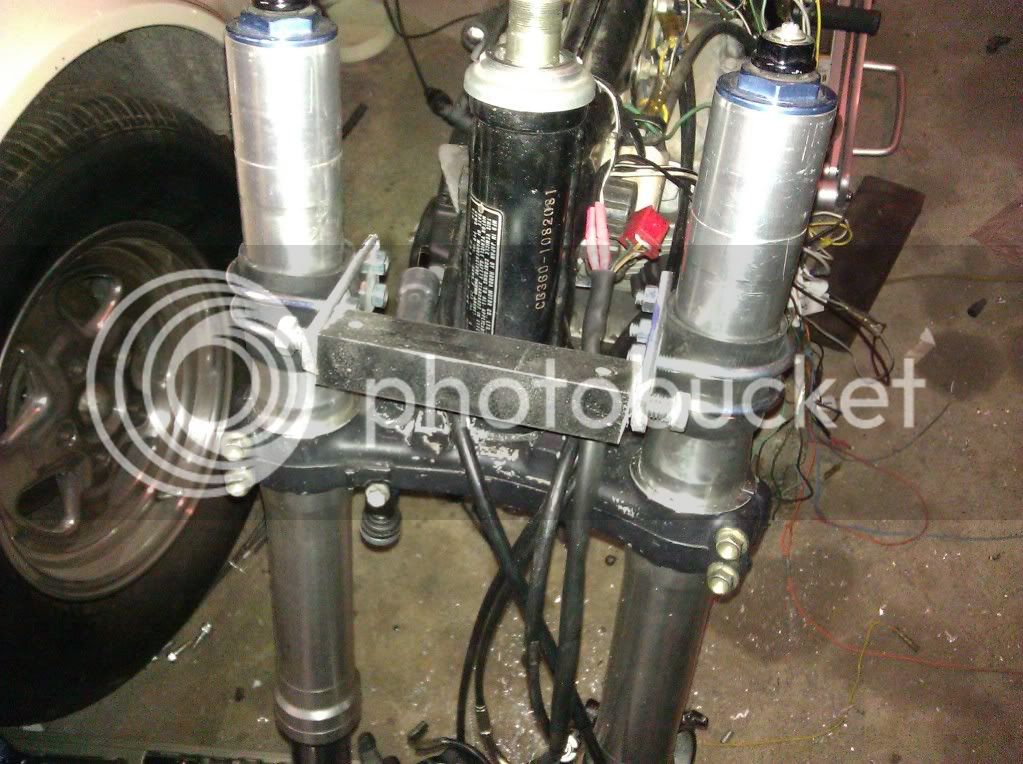 Here's the final position of the headlights. still have to tidy up that wiring thats hanging out there. 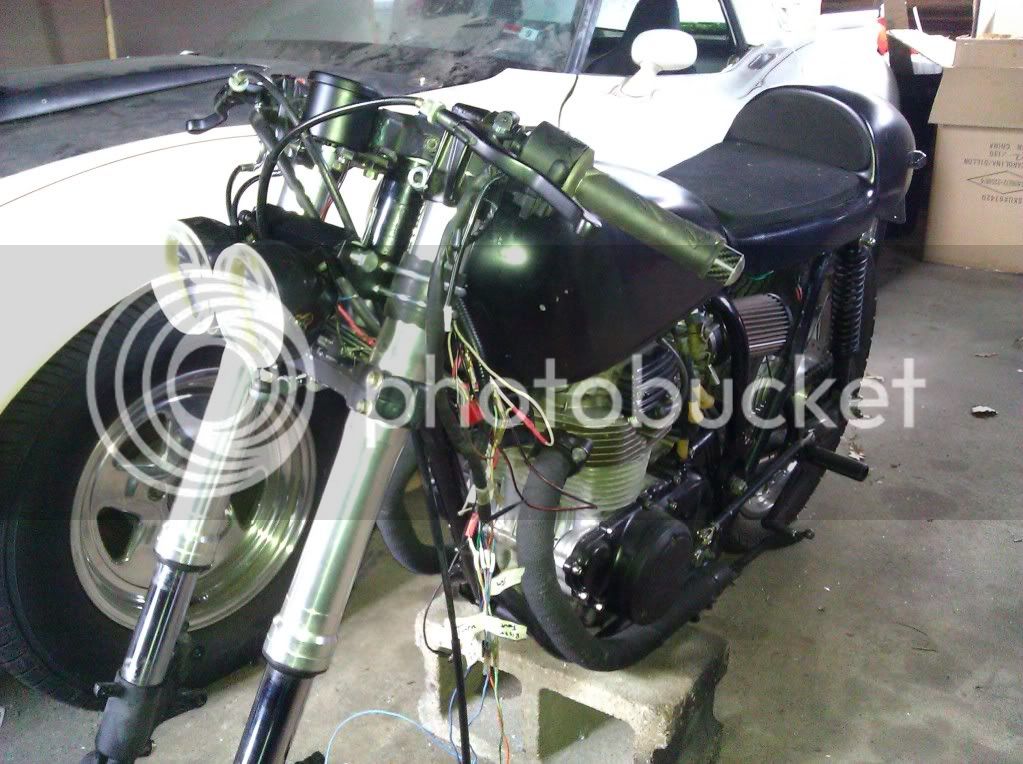 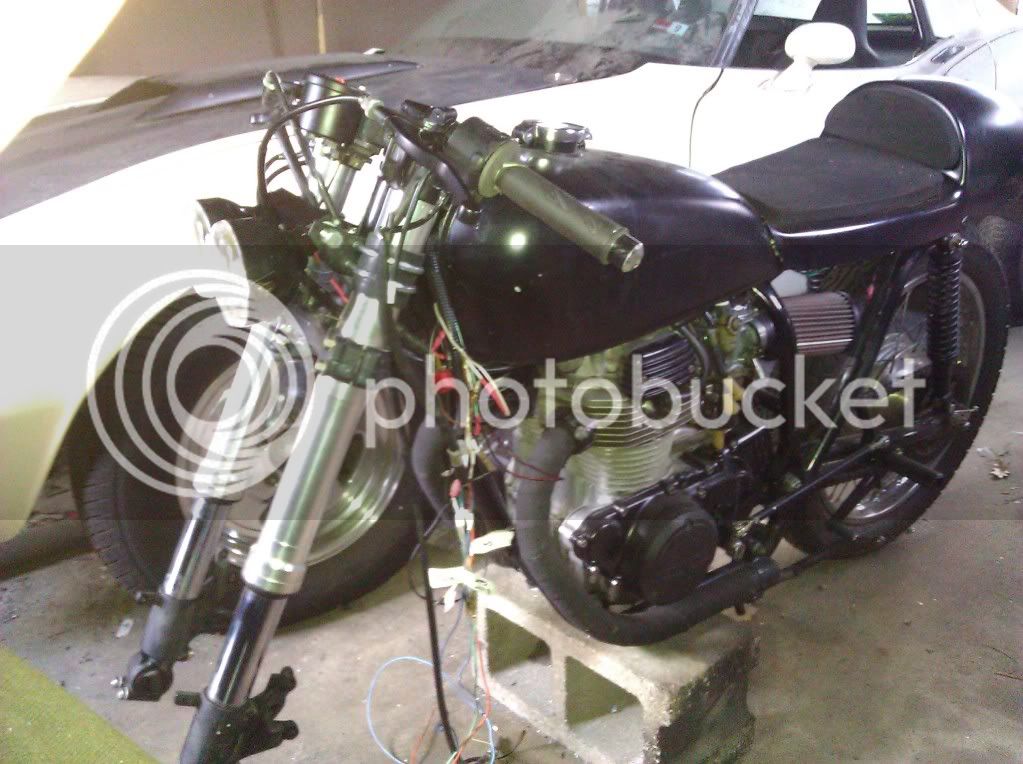 DTT BOTM WINNER
That CBR front end is a nice upgrade but I'm not a fan of U bolts and hardware store angle. It's a bit crude for that nice front end.

Check out Streetfighters Magazine for mounting ideas for the headlamp. The trend now is to use an old crash lid, but that would look too large. Try a single light mounted just above the lower triple on a custom mount.

i agree, its very crude. I tried looking online for ways to mount them but didnt see anything. Ive been struggling with this for a couple weeks now. Ill try the mag for different ideas. I want two lights though.

Edit: I did find some, but $90 for to ear brackets? I cant justify that.

lol, until about an hour ago i thought i was the only one reading it

I will keep an eye on the thread for updates.
K

would recommend working on the rearsets to get the contact point with the shift rod at a 90 degree angle. That will give the smoothest shifting.

DTT BOTM WINNER
Hey it's looking great man. The new front end will do you wonders!. Do your toes get warm, with the headers aimed at them? Maybe it's just the pics...

not really, but they def smell like exhaust after a while. I couldnt find turndowns that were small enough to slip on there, or I wouldve put them at a 45* angle facing out/toward the ground.

I got the front hub and wheel bearing spacer back from the machine shop today. took them 2.5 weeks, but they finally got around to it. I was going to have the front wheel on tonight, but I destroyed both the wheel bearings while trying to install them. I know, I'm an idiot. I had a piece of PVC that was just ever so slightly smaller than the OD of the outer race, but the race edge was so thin, that it cut into the pvc and the pvc then fit perfectly into the race. when I hammered a little more it mashed the bearings into the shielding and now they dont spin. I tried to be more careful on the second bearing, but it was the same result. Oh well. McMaster-Carr will have my replacement bearings here in 2 days. I'll use a socket this time. Funny, I've never had a problem using pvc before. related question: can I use conical or tapered wheel bearings instead of ball bearings?

i was going to, actually, but i threw them out upon removal. they didnt come out easily. I put a punch through one and the other was no longer round when all was said and done. thanks for the recommendation tho.

revheadgl said:
Hi,
I just use the old bearings as a drift to install the new ones.
Click to expand...

Hey, I used your idea, and now im stuck. well, the old bearing is. Its my fault for neglecting to mention that the new bearings are thinner than the original ones, so the old bearing i screwed up is now pressed in on top of the new good bearing. 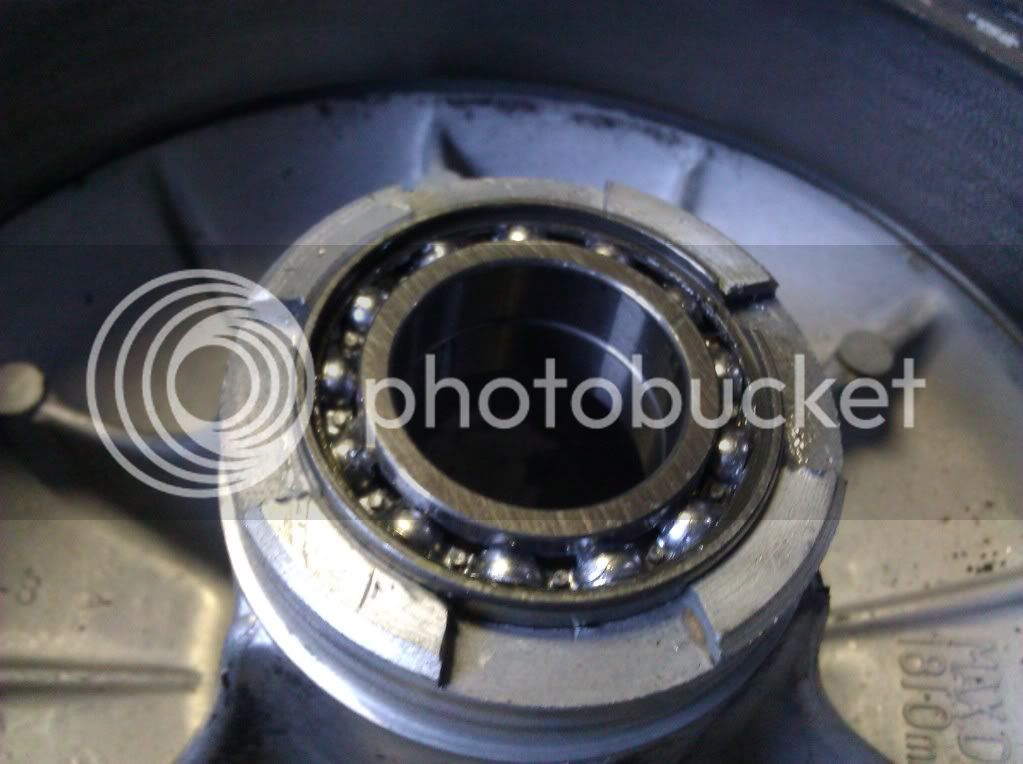 screwdrivers, punches and chisels cant catch the inside edge of the bearing to hammer it out from the back, vicegrips cant pinch it, ive broken a pair of pliers on it, I tried heat, any OTHER ideas? i think ive got to look outside the box on this one.

Edit: nm, i got it. had to use a dremel to give myself enough of an edge on the inner race for a punch to catch. came right out after that.

Ok teazer, since you bashed my last headlight mount right off the bat, what do you think of this one. any better? 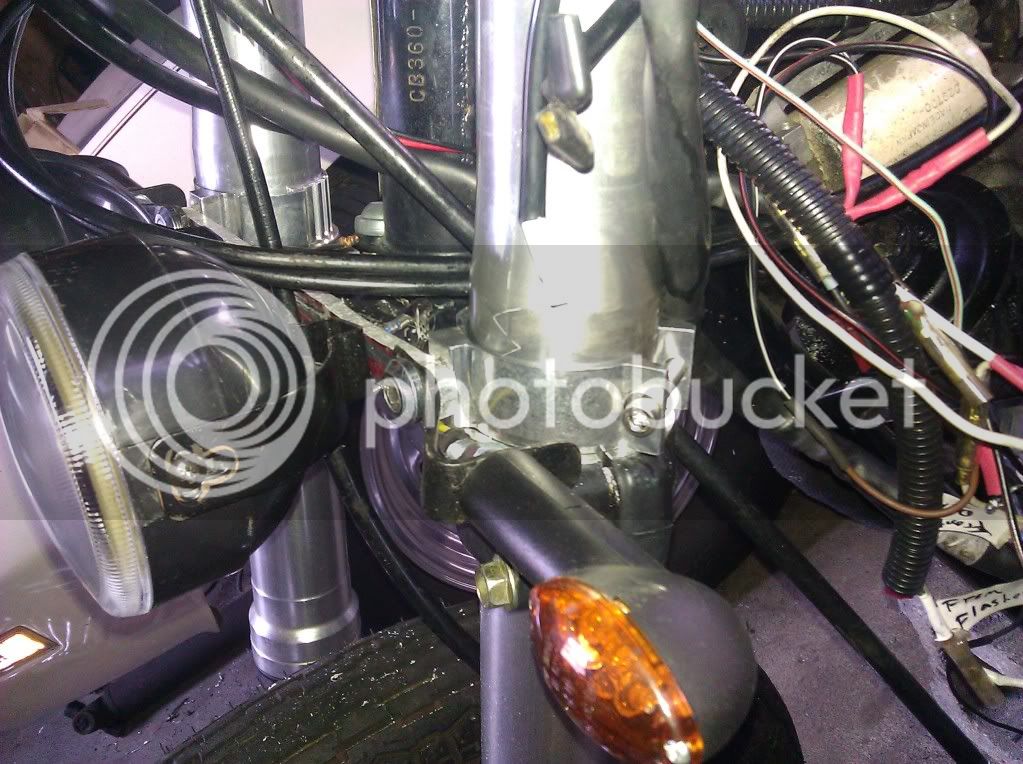 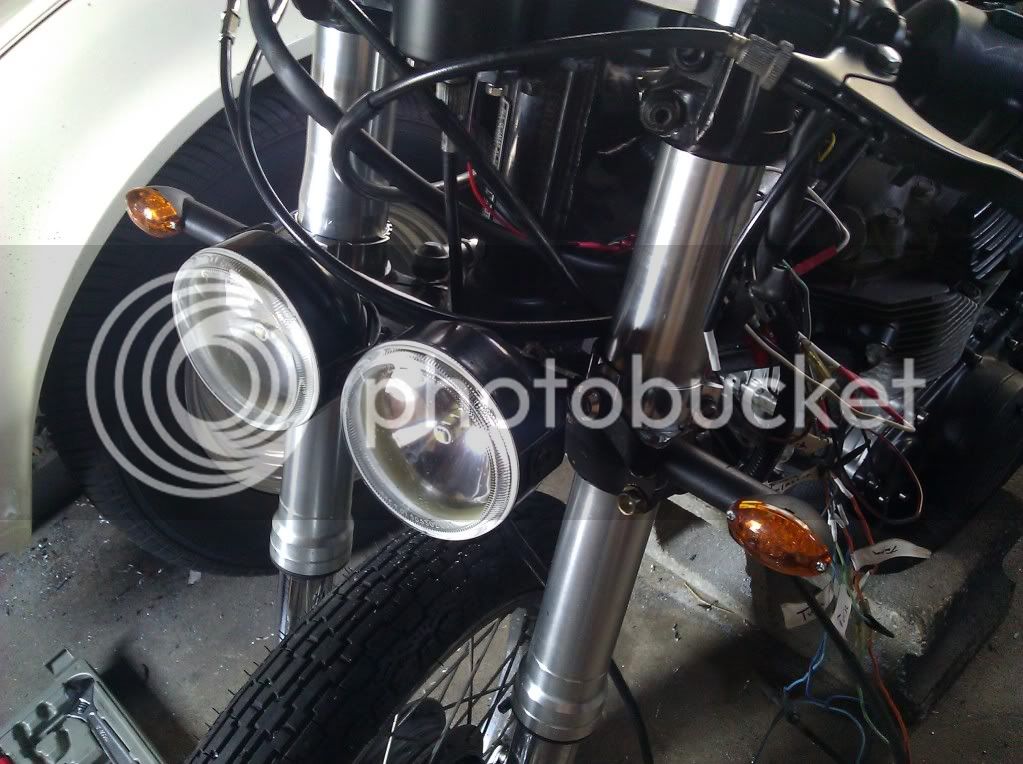 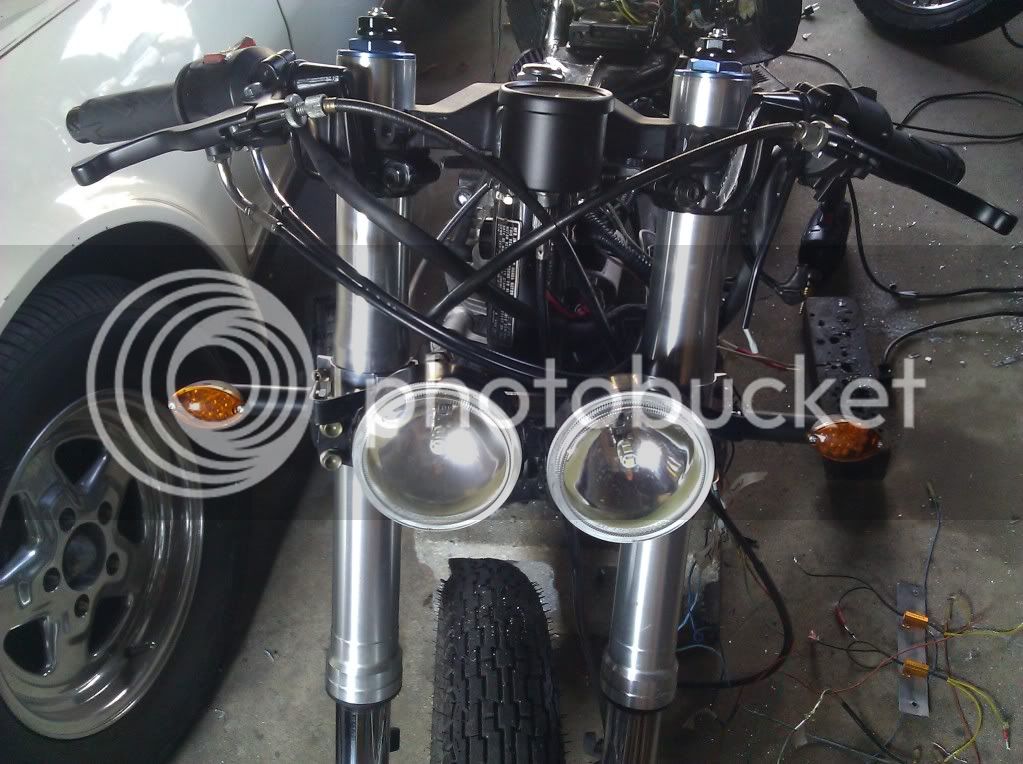 I'm going to spray the cross bar black as soon as i pick up some more low-gloss chevy engine enamel, my favorite color.

All right! the bike is sitting on its wheels for the first time in a few months. I'm done with the CBR954RR front end swap. until i ride it and find out i need to tweak something, that is. My friend who got the electricals working is wiring up the headlights and all the blinkers now. he was waiting for me to mount them. Here's some pics. 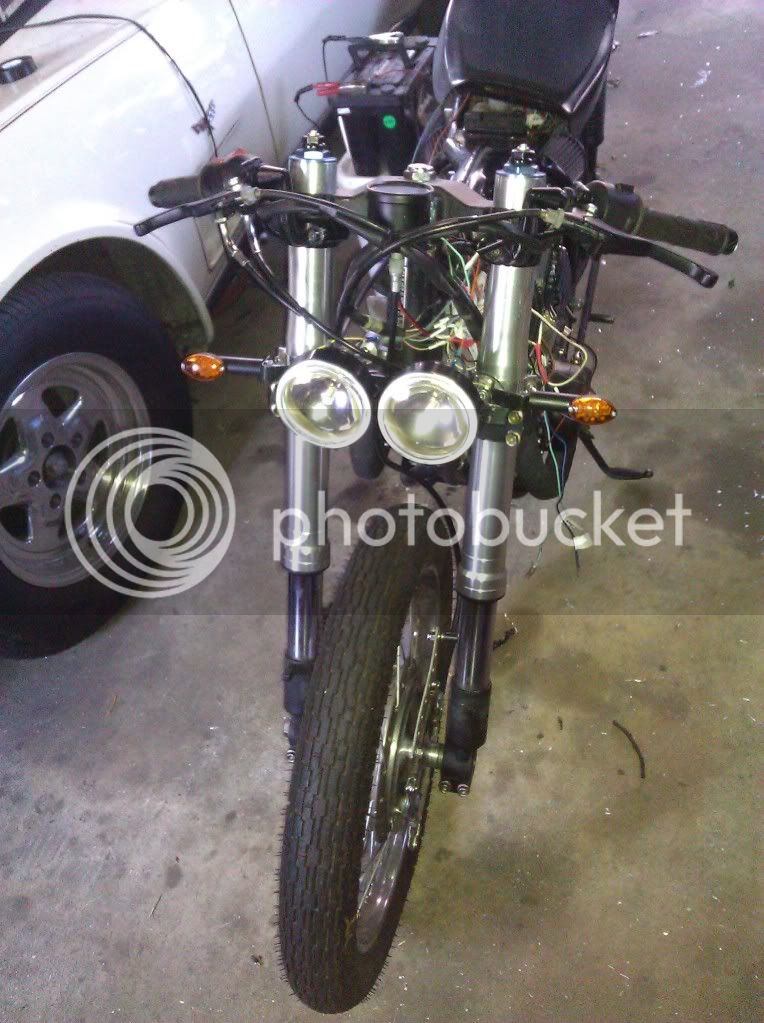 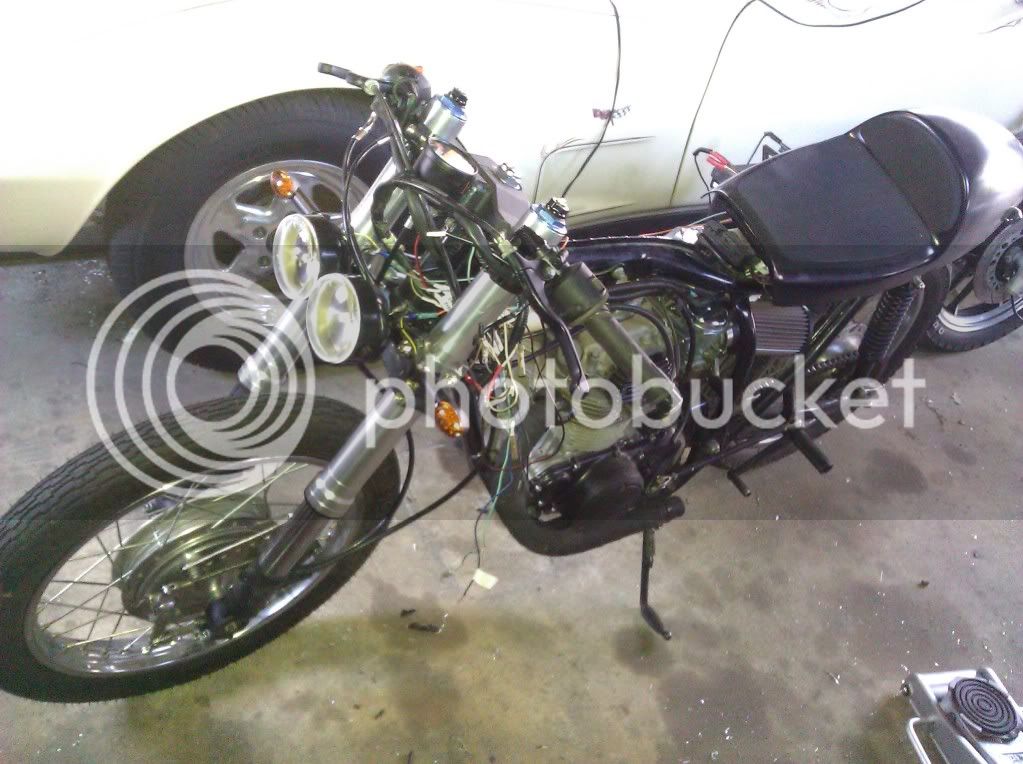 brake light switch mounted to the emgo lever. its a momentary normally on switch, the screw pushes the button and turns it off.