So, at least I can start the thread - hasn't inspired a name yet. And photos will wait until I can extract it from its parking spot in the junked-up family room. Anyway, I've wanted to do one for a while. I'm quite partial to the early naked 'wings. The Hunley - my '78 frame with '75 engine - was a blast to build into a cafe-looking custom. I wanted a stock restore, however, 1979 'wings don't come up nearly as often as the other GL1000s. I suspect it is because Honda reduced production and the buying public held off in antivipation of the 1980 release of the GL1100 with factory fairing on the Interstate models and eventual manufacturing shift to Ohio.

So I watched over the last year, bought a junker for spares (turned out not much useful from it). Found one that had been minimally customized and bought it. I've already removed the short pieces of 7/8" tubing it had for handlebars and mounted the correct ones, bought an ebay tail light (the bike came with the original handlebars and tail light/turn signal frame). Found a 75/76 seat that needs a new cover so I'll put a 78/79 cover on it.

The full vetter set that came with it had already been removed, and yesterday I removed the pigtail for the Vetters from the wiring harness inside the headlight, and found it infested with Scotch-locks! Looks like a day or so of carefully applying shrink tubing or liquid electrical tape to heal the wounds from the electrical Herpes a PO has left it with. I can;t believe that there are actually YouTube videos on how to use these nasty things. Here is the best method - DON'T! They cut strands, destroy insulation integrity, and make a very poor electrical connection. The Vetter set is going with a Time Warp Vintage Motorcycle Club member to the swap meet at Barber.

So, I'll keep this thread up as things develop. Not planning a true conquers build as that would cost way too much, and I just want it showroom-stock but not show quality. The project bike came with a Dyna S installed, but I plan to run points on it, at least at first. There is an experiment with Ford TFI modules that I want to try, and the Dyna S unit may get swapped to the Hunley for next summer.

Have yet to dig in to anything else. Noticed the radiator looks dry, and haven't tried to start it but that will wait until after Barber because I just don't have room to do more than minor things until the show season is over and the Hunley swaps with it for hibernation. Or I get the family room half of the basement cleared out. So, after Barber.

I had to do the same when I pulled all the Vetter crap off my 79. Scothlocks came with the damn fairings to hook them up! Even Dyna sends one for the power on their ignition, so wrong. Going to enjoy this when you get it going. I road my girl into work today and she's got an off idel stumble for some reason. Ran her for 4 days all over without an issue. 3500 KM's and not a hiccup. Now I need to see if something is off ignition wise, which shouldn't be with new dyna, or I suspect maybe bad fuel in my last fill up so some seafoam maybe. anyway, good luck. I'll keep my eye's peeled but like you, I had a hard time finding a 78/79 parts bike when I got clipped and wrecked mine.

If you have the chance, I'd really love a lead on the passenger grab bar that goes behind the seat. Seems everyone took them off and tossed them when they mounted the awful King & Queen seats that shove you up on the shelter.

As promised, I finally pulled it out of the family room side of the basement and into the garage. Took some photos as I swapped the bikes around. Headlight was removed to permit removal of the Vetter umbilical and will stay off until I can heal all of the wounds caused by the Scotch-Loks. After getting it in the garage, I pulled the cam belt covers and installed new timing belts. The old ones were stiff and the vendor info worn off the outside, so they were definitely due. Pulled the plugs and hooked up the battery (I had charged and stored it in a plastic battery box). Checked compression, and Yahoo! all 180 +/- 5 psi! The bottom of the engine is covered with oil and there is no obvious source, so I'll clean it well and watch. Although, the '77 that I had back in 2004 had the same oil coverage and it turned out to be from leaky fork seals. The cap over the rotor bolt was jammed and rounded so I had to chisel it off but luckily I had a spare from the junker engine. I think tomorrow I might just hook up the external fuel cell and see if it will fire.

She runs! Not great, and POURS fuel out of the carbs, but started without choke. (Choke is frozen - probably the cable.) Drained the carbs (I had run her on aux fuel tank). Sprayed her down with a full can of foamy engine cleaner, let it work, then hit her with the power washer. Letting her dry before bringing her inside. Inside of the tank has a light muddy brown/tan appearance. Swabbed it and it doesn't smear at all. Whose coating is this color? Wow, coated tank, Dyna ignition, good compression, runs right off the bat. I'm going to be lost on this build. At least the rear brakes and carbs need attention. And, someone put the front calipers on the wrong side.

That is wonderful. Looks like someone cared about it in its' past life!

Daubed some liquid electrical tape on a bunch of Scotch-lok wounds and reconnected a headlight wire that had probably been cut for the Vetter install. 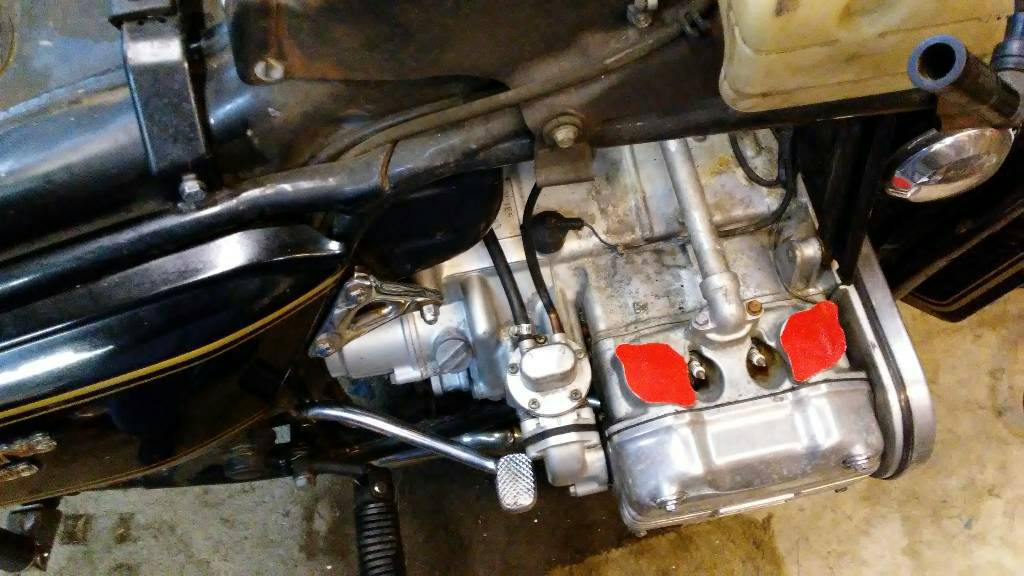 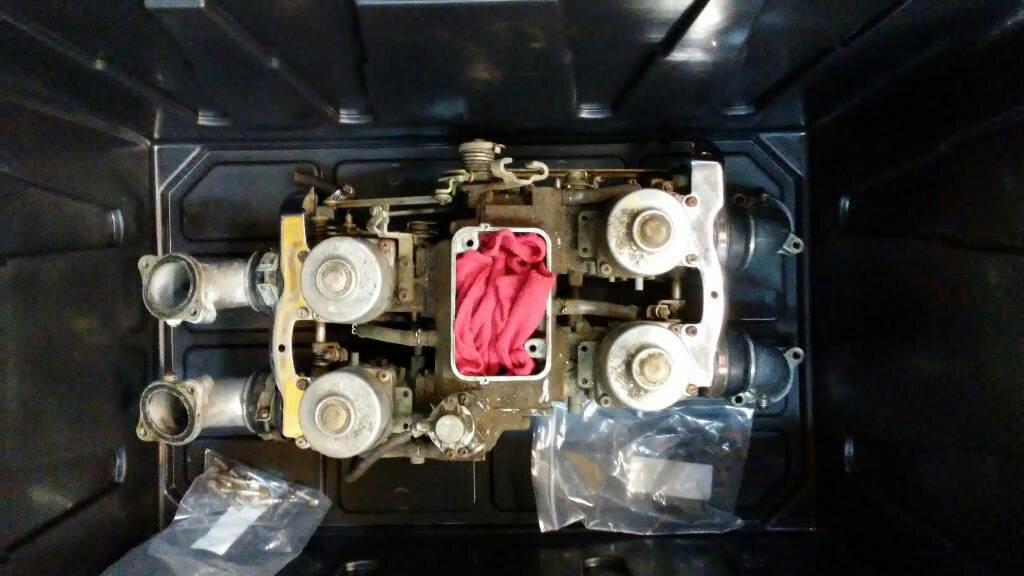 I pulled #2&4 off and removed everything for the ultrasonic. My big one that will take two bodies at once is dead, so the small parts from two carbs are in trays in the Harbor Freight cleaner. Guess the bodies will just get brake cleaner and 100 psi air. Not that bad inside, but outside the were pretty caked with road grime. So, I reassembled the piston caps and float bowls to them and put the rack back together. Then I put them outside on the drive and gave them a heavy bath of "Scrubbin' Bubbles (Dow bathroom cleaner)" and let it set for about ten minutes while I hooked up the pressure washer. Pressure washed them off real good, then dried with a leaf blower. MUCH nicer to work on now! Since this bike is primarily for go rather than show, I won't be polishing as much as I did on the Hunley. The piston caps are easy and add a nice glow, however.

A few PO issues, but I have Helcoil kits for these bad boys from the Hunley build. Just have to find them.... Think the carbs have been leaking for a while?

Lol....when I got mine the top of the motor looked like that...
It was awful.

Oh yeah, junk yard did not have the rear grab bar.

cbrianroll said:
Lol....when I got mine the top of the motor looked like that...
It was awful.

Oh yeah, junk yard did not have the rear grab bar.
Click to expand...

Thanks for checking. I think I might finally have one coming.

Finished carb clean, rebuild, PO repair (hopefully fixed more than I broke) of wrong jets, missing float valve filters, stripped threads, wallowed JIS heads, shuffled float bowls. Leak tested with isopropyl, fixed the one leaky float seat (just needed a polish), let it set 24 hours and leak-free. Drained and awaiting some pretty-work on the intake runners. Rear bake rebuild kits are in and I'll start that next. Seriously considering reassembly after brakes are sorted to use it for a daily driver while weather is good. This would point out any problems that need addressed when weather turns cold (and the 1800 returns to DD duty).

Those carbs sound like they were pretty bad! I should probably rebuild my rear brake also...looking forward to seing you do yours!

Actually, not all that bad. The outsides were filthy but the insides weren't all that bad. Happily, no major corrosion causing the bodies to not be useable. And, no jets over-tight. I reused all but the wrong sized jets (used a couple from the junker I have) after thorough cleaning (ultrasonic, brake cleaner and compressed air).

Brakes are all apart. Easy so far, didn't have to resort to grease gun to remove pistons and they look reusable. I'll clean the cylinders with aluminum foil and brake cleaner, reassemble with new rubber lubricated with brake fluid. I've already pulled the plug from the MC and cleaned the return hole. Not going to bother with painting for now. If they get painted eventually, it will probably be brushed on. I hate brakes.

Did a light polish on the intake runners. Takes so little time and really looks nice. Took longer to remove the gook that a PO had put on the o-rings, really. Looked like both silicone seal and something that hardened up. Intake runners on 1 and 3 are turned up so that the rack will slide in easy.

Finished cleaning the rear caliper and lubed it all up with DOT 3, assembled, and installed. Rebuild kit for MC and caliper from George Fix on ebay. Here is a hint for doing the rear caliper. If you want to put the bike back on it wheels and not have the rear wheel sliding around, cut a piece of plastic (or other material) conduit to replace the rear caliper as a spacer.
Boiled the carb bodies because the big US cleaner bit the big one.

What did you use to boil them in?

I'm getting the randakk's rebuild kits and doing mine over the winter along with timing belts and other refresh items.

Maritime said:
What did you use to boil them in?
Click to expand...

Tap water with a drop of Micro 90. A lab surfactant. I don't think the Micro 90 did much. And just a drop to keep it from foaming. Randakk and Nixson say distilled, but I didn't want to go to town again. Besides, we distill other things in Tennessee!

I've read of many using lemon juice. I took Randakk's suggestion and left the two connected with the chrome garnish. That sure did make reassembly easier!