Well, got Friday off so will kick her over again then and see how she goes.

Then I took a slight detour tonight and revisited the colour ideas after a bit of a brain wave (if you can call it that) this morning...


Thinking maroon like what's on there now, with the silver that's currently on the rear mudguard for the knee dents and stripes, but I'm thinking reverse it on the guards so they're silver with maroon stripes instead.


Got it into the GIMP tonight, sorry about the crapiness but my wrist was playing up a bit tonight and I couldn't get neat lines going. I have to do fiddly stuff with my right hand coz my left's too useless, but my right wrist is the one that's buggered so I can't use a mouse for more than about 15 minutes before pain and discomfort hits.

I was going to do the front and rear shots to show the stripes on the guards better, but couldn't cope with that tonight so will do them another time.


Would love to get some feedback from the hordes following this thread (hahaha)...

I dunno Pete........instead of filling in the knee dents with silver, I would run a 12mm silver stripe from the top of the tank to either the front of the badges (or the knee dents), follow the bottom contour of the tank, along the bottom edge of the seat, and connect the left and right sides by the grab rail.


Big Rich said:
I dunno Pete........instead of filling in the knee dents with silver, I would run a 12mm silver stripe from the top of the tank to either the front of the badges (or the knee dents), follow the bottom contour of the tank, along the bottom edge of the seat, and connect the left and right sides by the grab rail.


I think I get what ya mean, and going by the feedback over on the GSR it looks like the general consensus is the silver knee dents look crap, and I'm now tending to think the same way, it's just not working like I envisioned in my head.

Tim Tom over there did me a huge favour and did this and I'm sorta likin' how it goes:

Once I get some dualies on there I think it will start to come together.

I really wish I had Tim Tom's abilities with the GIMP as I might be able to express properly what I see in my head...

OH MY!!! That is sweet looking, and silver pinstripe around the knee dents would look awesome!

I think I finalised the fork brace/front guard mount tonight:

It'll end up with a flat top with a 20mm diameter bend on either side of the top and will then go straight down to the stock guard mounts on the fork legs.

Obviously I need to round the bottom corners off and probably round the corners of the cutouts as well, but that should be pretty much it I hope. Just hope that gives enough bracing...

Anyway, I also marked out the bits I still need to trim off the rear tail piece too. If I get spare time on Friday I want to use it, so I could finish this trimming off and cut out the fork brace:

That shouldn't take long at all with the grinding wheel on the dremel.

And, finally, I did two extra mock ups in the GIMP.

First one is Tim Tom from the GSR again except I added the headlight and a seat mock up:

And the second one's for you Hoosier Daddy:

Must say I'm not sold on the pinstripe, but it could be my inability with the GIMP too... I think it might actually be that there's nothing else silver for it to work with except maybe the polished edges on the rims (which I still have yet to actually polish)...
Maybe if I had a pinstripe around the tail piece as well? Dunno...

Well, just to add some more mock ups to the equation:

Rich, is that second one sorta what you were suggesting earlier on?

Hmmmm... that actually doesn't look so bad... dammit now you're confusing me again... wait... I was confused to start with


You're welcome... bad thing is I remember when the Ford dealerships here in the states had these special editions on the lot for sale.

But today I'd rather have one of your Falcon XB-GT's

I don't think the maroon tanks had th same striping as my black tank, but I think it may be worth looking into for yours. Let me see if I can find a pic of mine before paint.......

Here's the best pic I have: 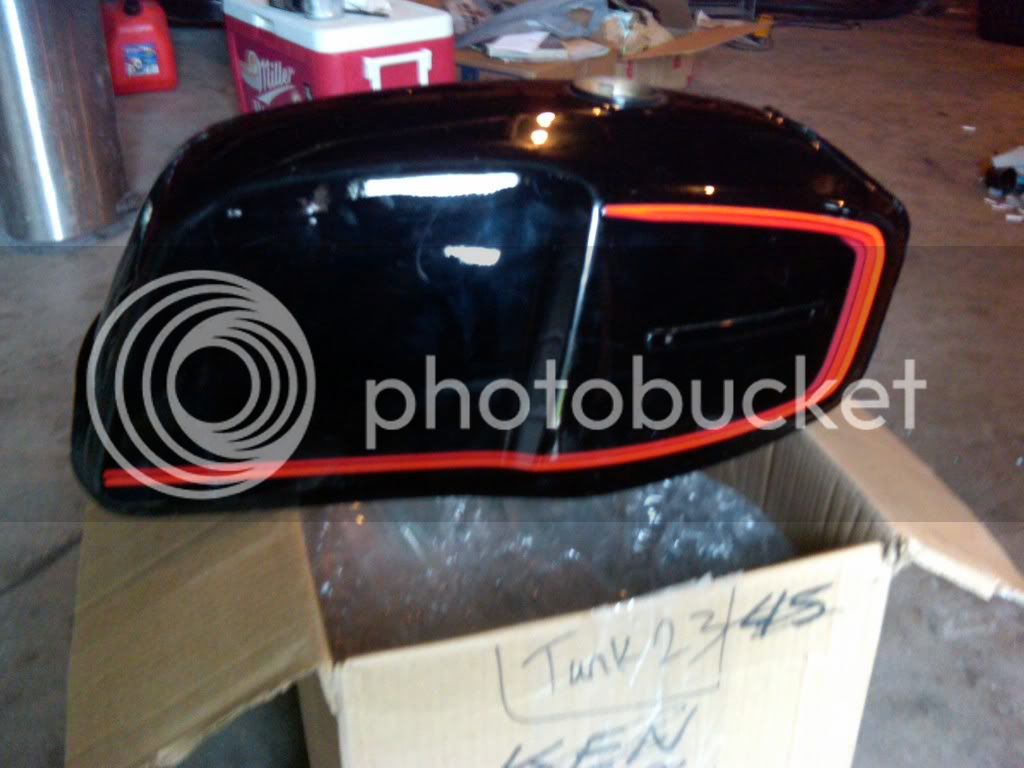 Notice how there's a couple stripes that follow the edge up front? I like the original design and would have kept it, but it didn't fit for me.......just something to think about.
H

Ha! That's *exactly* the same pic I just posted on my rebuild thread over on the GSR... except I'll be honest and say I ain't fussed on it...


I'm back on the plain jane maroon with the exception of the twin stripes down the tank and tail piece... maybe.


The big deal for me was I got it fired up again today, but it's still crap. That ignition circuit is driving me insane! Tried different resistor values and got no spark, went back to the first values and it's retarded to buggery.


Anyway, large videos of the action, and you can sort of hear how the pipe will sound, apologies for my ugly mug:

I also got an unintentional high res pic of the exhaust which is pretty nice:

Then instead of letting the day be a complete bust, I finished trimming the tail piece ready for putty and paint:

Not perfect, but much closer than it was so it should be good with some putty and paint.


Then I started on my fork brace/front mudguard bracket:

I realise there will be better ways to cut the holes, but that was the only way I could think to do it today, and my wrist will never forgive me for the hacksawing and filing that resulted... I've left the corners in so I can file them with a round file and try to make it look a bit better than just square corners.


Picked up a bit of pipe to bend with too:

I think we have a weiner:

Tempted to run the stripes all the way to the front guard but I think that will be too much...

BEST SO FAR!!!
As far as your square hole goes, it's easier to drill 4 holes in each corner so they just hit the edges of you square, then just play "connect the dots" with your hack saw. Leaves you with a nice even radius at the corners and much less work.


Thanks mate! Pretty happy with that myself...


Hoosier Daddy said:
BEST SO FAR!!!
As far as your square hole goes, it's easier to drill 4 holes in each corner so they just hit the edges of you square, then just play "connect the dots" with your hack saw. Leaves you with a nice even radius at the corners and much less work.
Click to expand...

And now you tell me! All good, I ended up playing the "drill lots of holes in the wrong places, join the dots with the cut off wheel on the dremel, then file the buggery out of it" game instead... :

And I had one final mock up to share that one of the guys over on GSR insisted I do with stripes extended to the front guard:

Apologies again for my crap work with the GIMP, not sure if that will work or if it will make the rear guard look out of place now...

Ok, fork brace is very close, just need to drill mounting holes and figure how to bend it properly.

Basics are done but I was about to start bending and realised the mounting holes weren't drilled yet as in the last pic above.

This is how I was going to bend but it won't work as upwards pressure from me isn't going to make it conform to the shape of the pipe:

I'm going to try to set something up with a gap that I can "pull" the pipe down onto the plate with the clamps so it can force it to the shape of the pipe.