Bought the bike a year and a half ago for dirt cheap. Guy was moving to California the next day, so I talked him down from $1200 to $400. All it ended up needing was a battery and the carbs cleaned out/new pilot jets. I ended up putting new grips/handlebars, headlight brackets, a non-vacuum petcock, and tires on it and just rode it that way for a good year. Tank had a fantastic patina on it (replacement tank from an 81) and it had some cheapo 4 into 1 exhaust already installed. It even came with a front fairing in great condition! I managed to snap the windshield on it by stepping on it in the process of loading the bike in the truck, but otherwise its perfect. Ugly, but perfect. (Its for sale, anyone is interested. lol)

How I bought it: 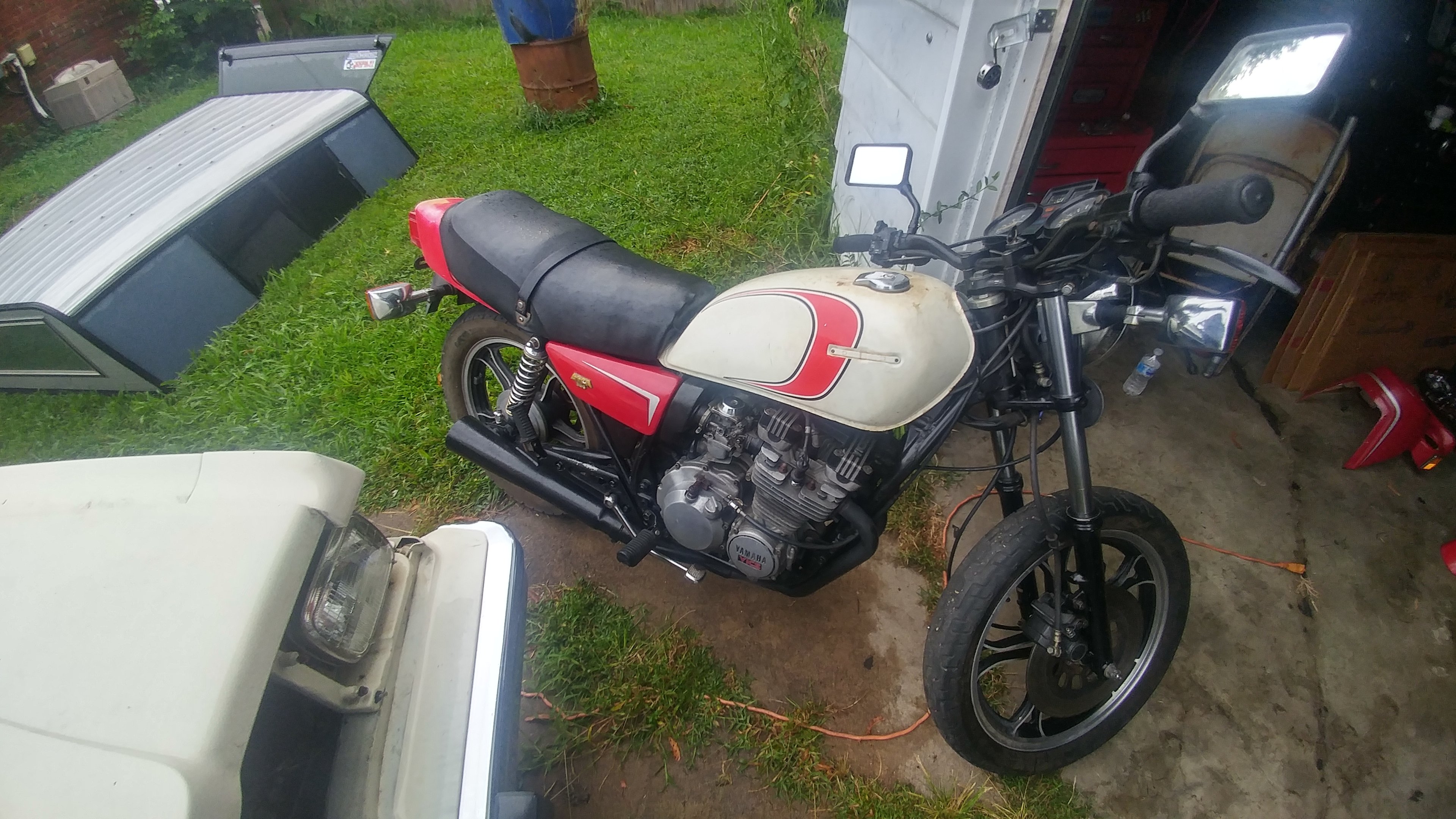 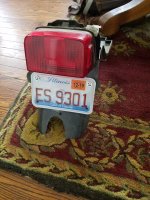 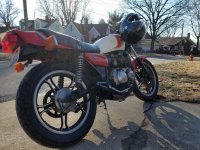 Shortly thereafter the damn thing started falling apart on me. The speedometer AND tach both blew up within the same week and the fuel T started dumping fuel all over my legs. Then the badly repaired fuse box started fussing with me. THEN the megaphone fell off the exhaust and was run over. I rode it that way for a while until the exhaust studs started snapping one by one. After 3 of them bit it, I called it quits and parked it until I could get the thing repaired properly. Thats just how it is when you try to daily ride a 40 year old bike with an unknown maintenance history, amirite? 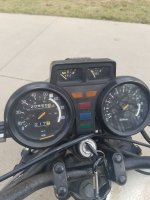 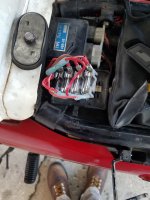 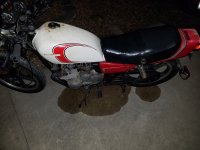 The exhaust sounded and looked cool before the studs broke, but its a miracle I never got a ticket. I got the cops called a couple times. Hahah.

This last month or so I finally started tackling these issues one by one. First thing I did was pull the engine to drill out and replace the broken studs. I decided to paint the engine and do a valve adjustment while I was at it.

Shes a nasty engine, alright. I scrubbed it with a wire brush and some Simple Green to get all the crap off. I then proceeded to put a new valve cover gasket on it. Dont want that grime coming right back. 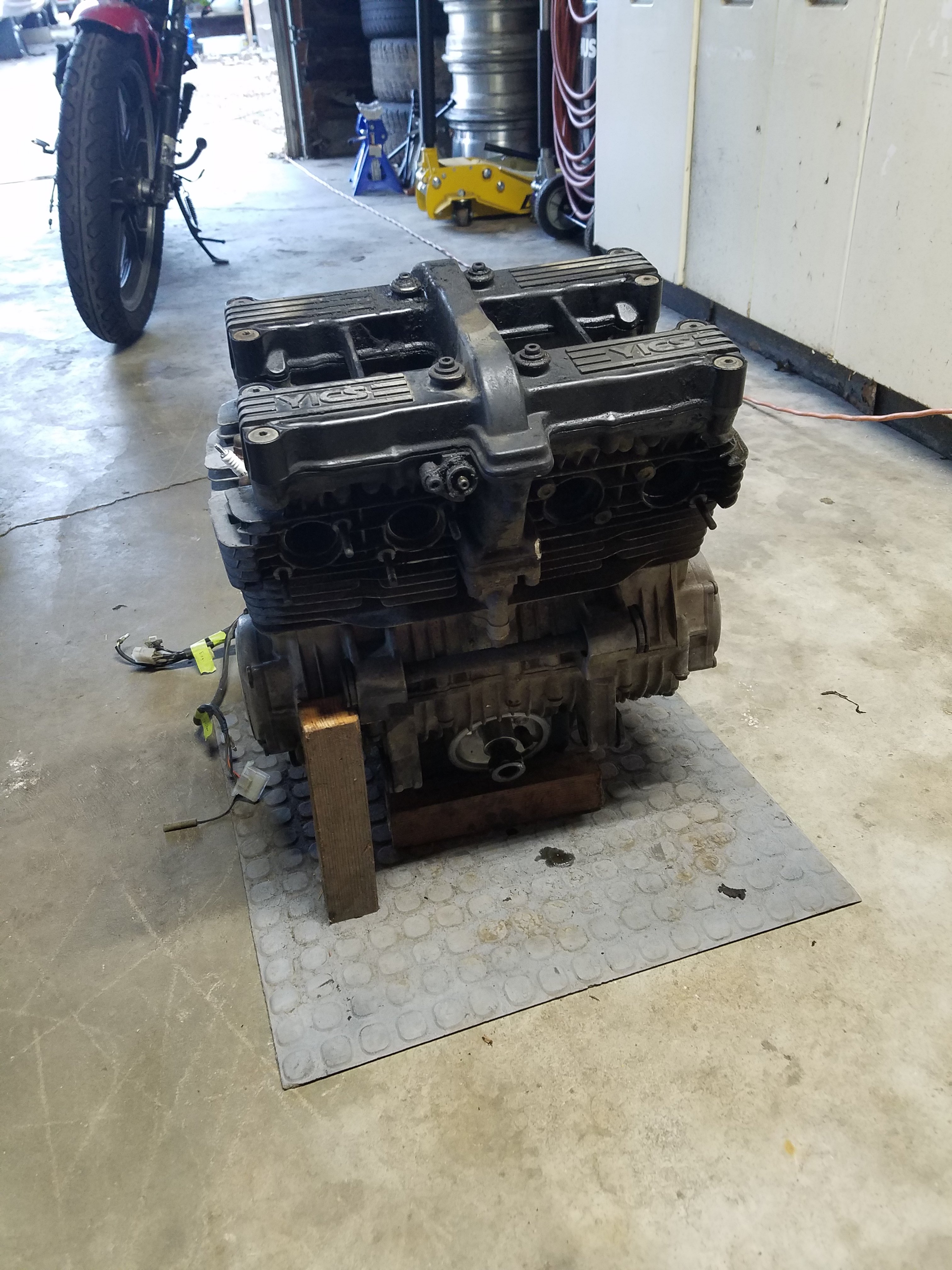 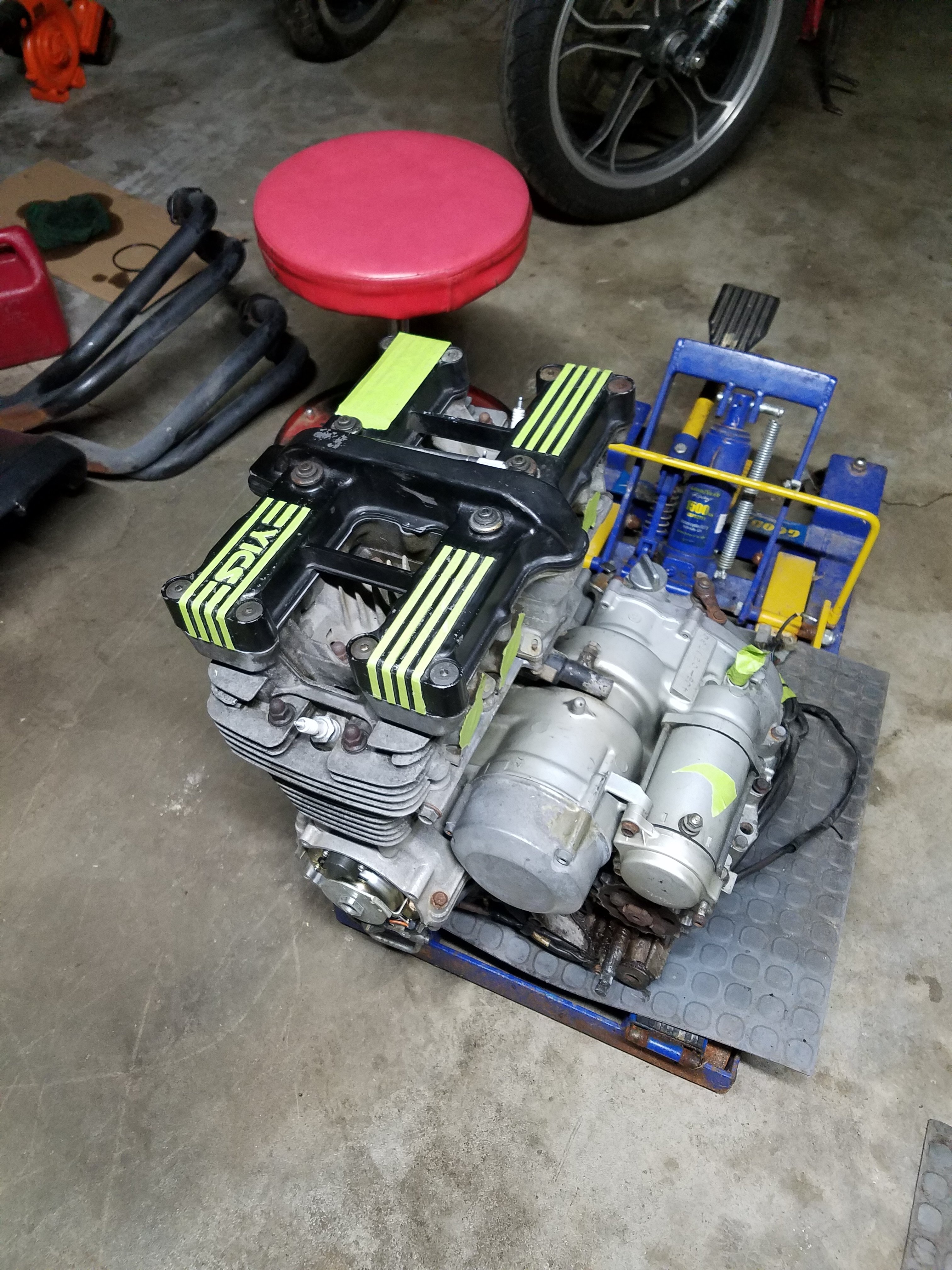 Anyway, I touched up the engine covers and gave it a coat of paint. I also painted the tops of the carbs while I had them apart for cleaning and the new fuel T. For some reason only the outside two are chromed. 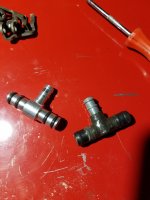 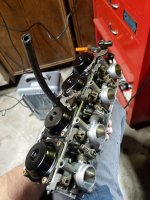 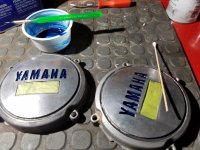 I decided on crinkle paint for the valve cover. I would definitely recommend cooking this type of paint in the oven. Ive never had it come out well otherwise. 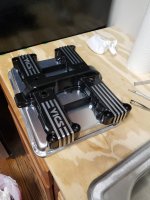 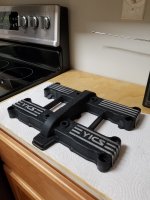 The end result after a coat of paint, new carb boots, and gaskets! Ready to go back on the bike. 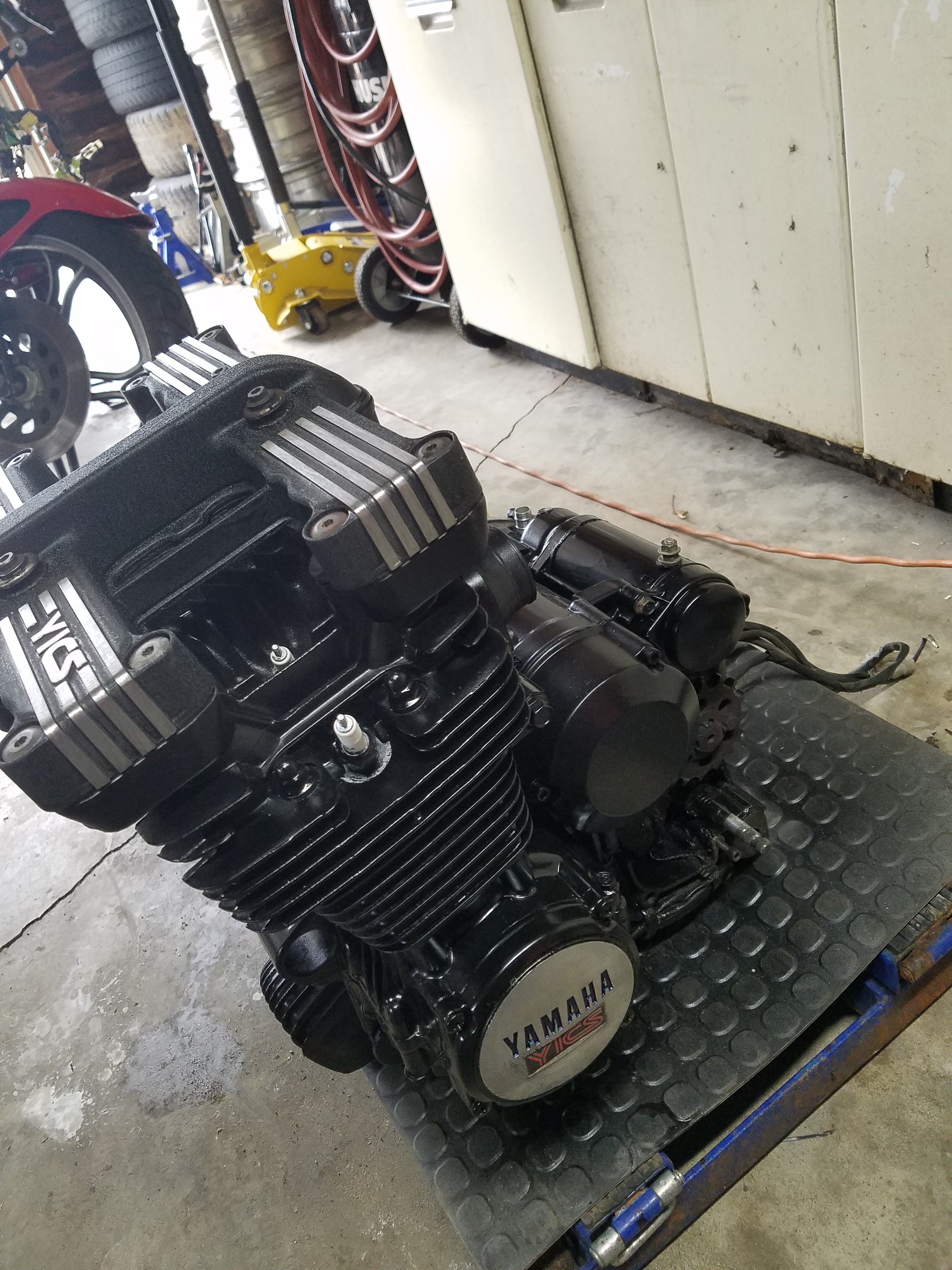 Just a few days ago I popped the engine back onto the frame and wired everything back up. I threw a coat of header paint on the exhaust just to clean it up a little bit and seal up the rust until I can get something a little better. Exhaust sure is expensive! Ill probably pop some baffles into the tip and make a hanger for it so the studs arent flexing so much. 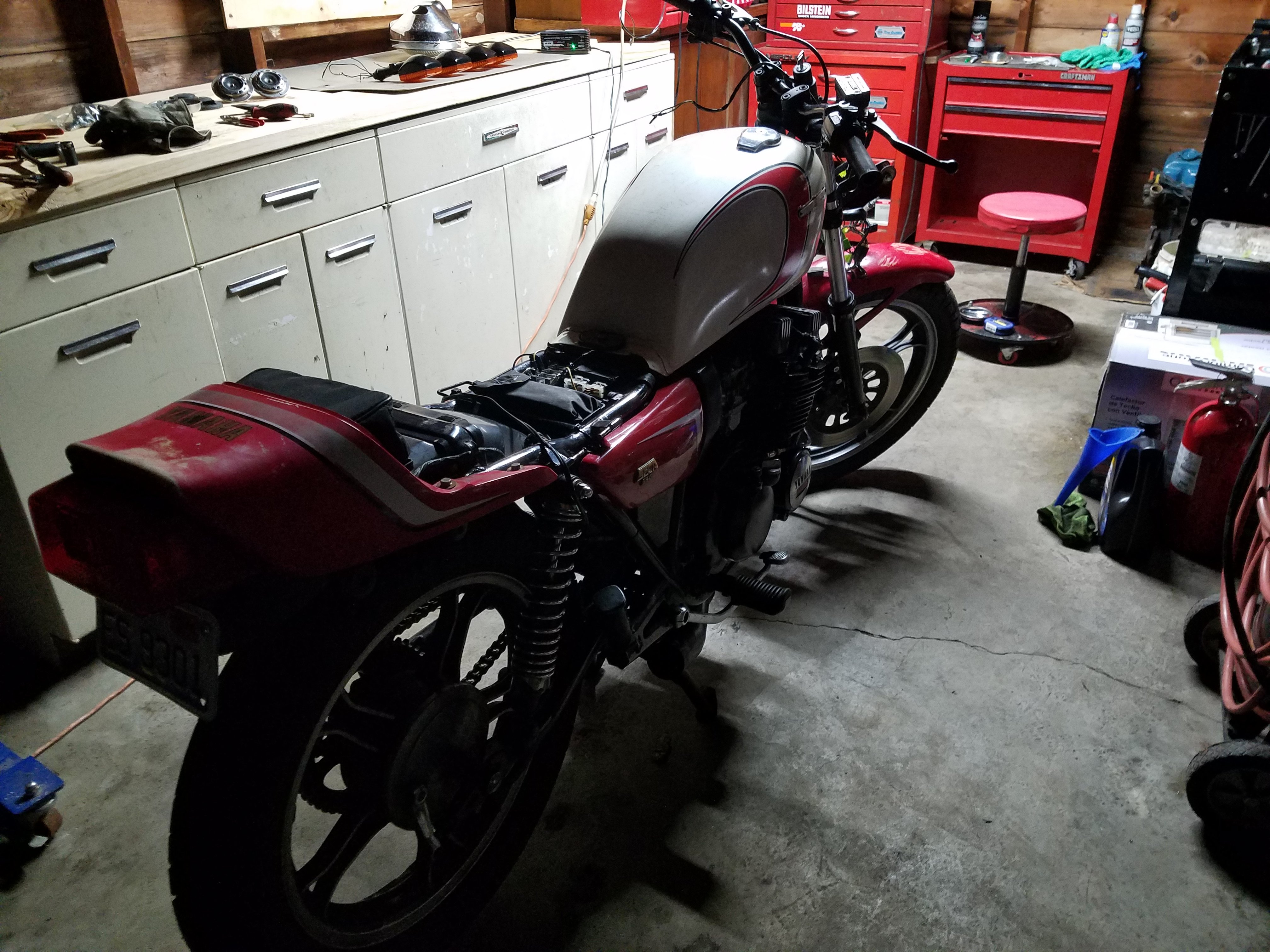 All thats left is waiting on the seat! I have my friend trying her hand at recovering it with some old Maserati interior pieces I had lying around. If that doesnt pan out, I plan on hunting down a Giuliari seat from Europe. 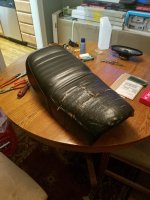 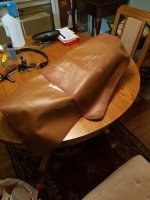 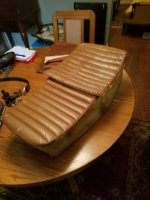 Once the seat is back on, I can get back to riding it once it warms up a bit. I still have a long list of plans, but at least Ill have a solid foundation to build off of. Im talking some cosmetic updates and upgraded shocks/forks and brakes. Possibly start hot-rodding a 600 engine if I get my hands on one. Lots of big plans, but this is where Im at right now.

DTT BOTM WINNER
Good start. Did you test compression before you re-fitted the motor - just to be sure?

If you need a cheap muffler, I have a black, steel MAC that you can have for $40 - unused. What is the outside diameter of your exhaust pipe? I'm near Six flags. Where are you located?

teazer said:
Good start. Did you test compression before you re-fitted the motor - just to be sure?

If you need a cheap muffler, I have a black, steel MAC that you can have for $40 - unused. What is the outside diameter of your exhaust pipe? I'm near Six flags. Where are you located?
Click to expand...

I did not, but it never gave me any reason to believe compression was an issue. No smoke or strange behavior. Its on the agenda, but even if its a bit low itll have to do for now. Im not tearing down this engine. Lol. Hopefully Ill have a 600 built for it by next year.
As far as the exhaust goes, I really just need a new header. This one is pretty beat up. Thanks for the offer, though. I have some ideas for what I wanna do for a muffler. Sadly I dont have a grand to spend just yet for the whole system.

Also, Im out by St Louis. Not far from you really.

Fixing the clock needles is easy. Don't try to glue the old ones back on - they've had it. Find some clear plastic bubble pack (like is used to package things like a brake caliper rebuild kit onto a card) and cut some strips from the 90 degree edges. Cut to length and a point, paint with your choice of florescent paint, attach with just a spot of super glue. To get the clock open, follow the guidance of many Youtube videos and web posts. Just be patient peeling the ring.

Honestly, I need to stay away from this bike for a while. But, parts are supposed to be in this afternoon, so.... Good thing, too because I decided to check that J cap in an F position. They had jambed screws in the cross-drilled supply holes in the cap, and RTVed the bolt holes. And of course...

pidjones said:
Fixing the clock needles is easy. Don't try to glue the old ones back on - they've had it. Find some clear plastic bubble pack (like is used to package things like a brake caliper rebuild kit onto a card) and cut some strips from the 90 degree edges. Cut to length and a point, paint with your choice of florescent paint, attach with just a spot of super glue. To get the clock open, follow the guidance of many Youtube videos and web posts. Just be patient peeling the ring.

Good thought, but Im just going to put an older, simpler Yamaha speedo on it and possibly a simple digital tach when I switch to the 600.

Also a little update for you guys; I got the seat back and shook the bike down on a few longer rides. The seat is very comfortable compared to my rubber-mat-with-towel-under-it test seat. lol. 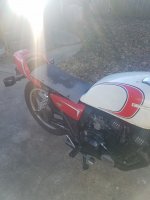 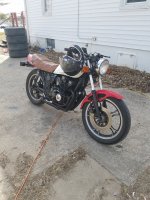 Its not perfect and needs a bit of adjustment, but I like the color on it. During my ride I noticed that the horn had finally given out and started sounding like a wet fart. Swapped to the other OE chrome one and it was the same way. THANKFULLY I had a horn lying around from my 125 Suzuki and popped it on. Thought about putting a car horn on it, but decided against it. Hah. 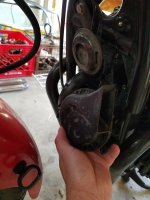 Finally got it all sorted out and one sides turn signals stopped working! Just my luck. Bulbs and wiring checked out. Pulled the switch and turns out 2 of the 3 solder points on the switch had broken! Flux is your friend! 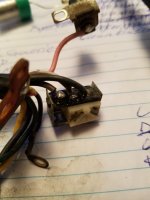 As it sits now. Almost ready for riding season. 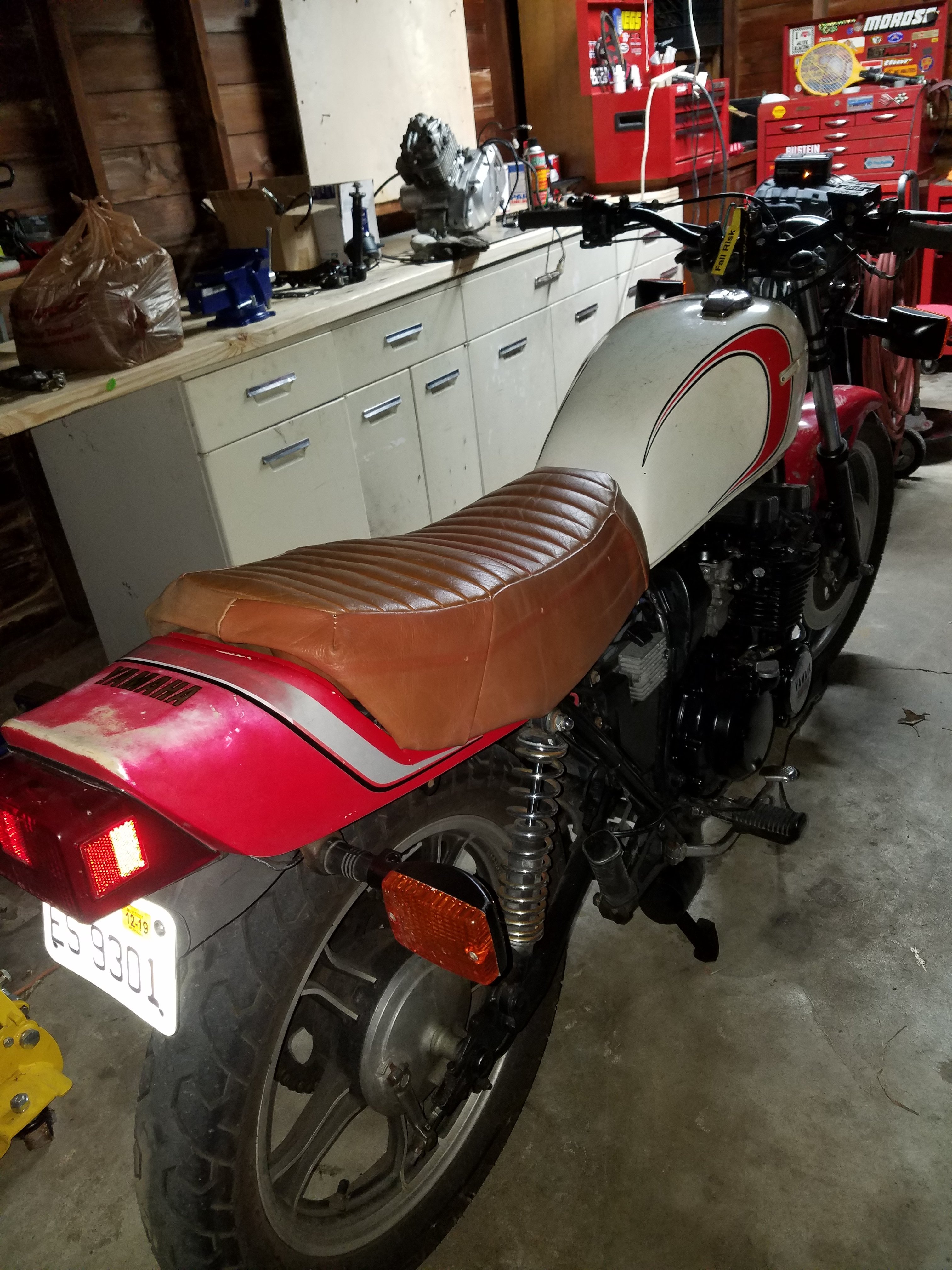 As a side note, I also picked up this sweet patch on ebay. NOS and only one Ive seen so I had to have it! 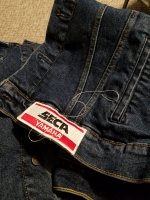