Finally got around to tearing down the GPz and starting the transformation. My stepfather has a 3500 sq ft workshop/motorcycle heaven that I took advantage of this weekend. A little background story, I know i posted it elsewhere, but figured I would throw it in my build post.

A few weeks ago I bought an 85 GPz 750 w/ 15k miles, new carb kit, new tires, newly painted tank, new brakes, and cosmetically in decent shape for $875 on craigslist. Best $875 I've ever spent. I love the bike and it rides like a dream. I've owned newer model CBRs and other sportbikes, and this bike is probably my favorite so far.

I removed all the fairings and body pieces to get a good clean on the bike after I bought it, and loved the lines of the bike without the monsterous front fairing and the other body work removed. The bike also felt really really front heavy when turning with all the weight of the braces and front fairings hanging over the front wheel. So I decided to keep all the original plastics off the bike for preservation, and turn the bike into a kinda fighter style I guess you could say.

This is how the bike looked when I bought it: 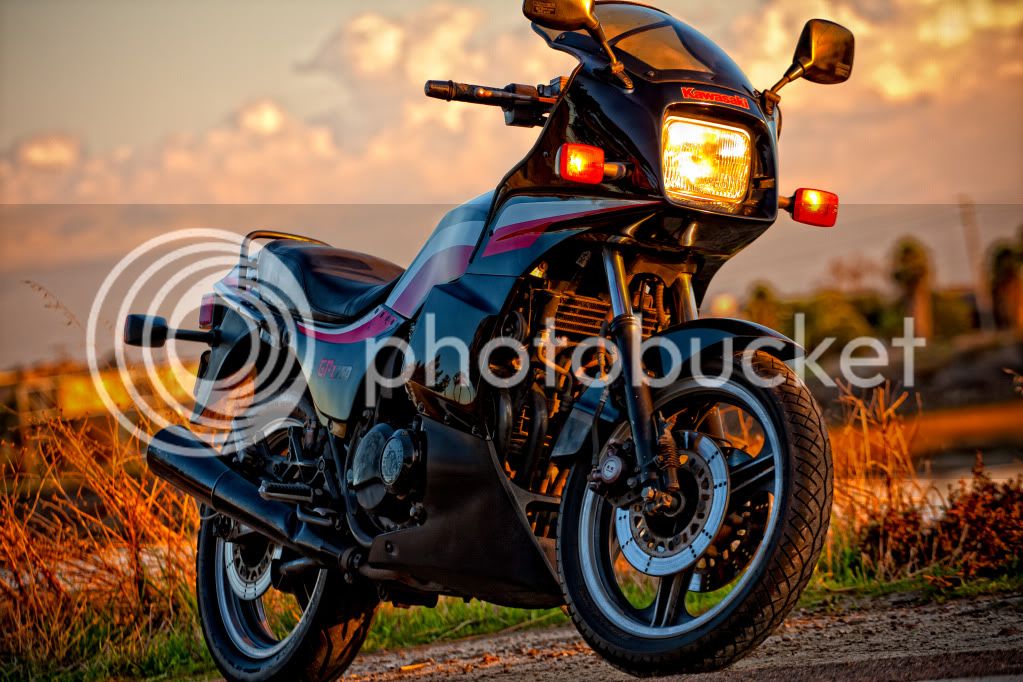 This is where I started this weekend: 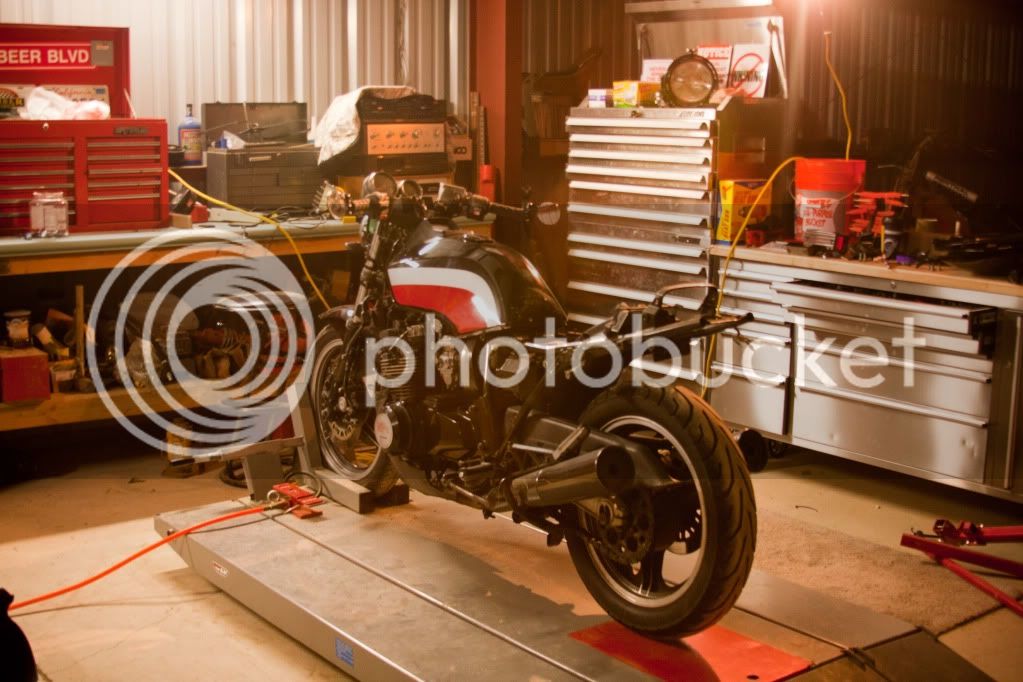 Originally started with this headlight, that I eventually painted red. The light was off like 76 yamaha something, that was basically torn down to the frame that was tossed in the corner of my stepfather's garage. The light was pretty much the only thing left. So I decided to try and use that. The light ended up being bad, and kept shorting out fuses, luckily. Ended up putting a much larger, 7", I believe (someone on here will now) headlight assembly off of a CB750 (that was also just laying around. Man I love that garage). 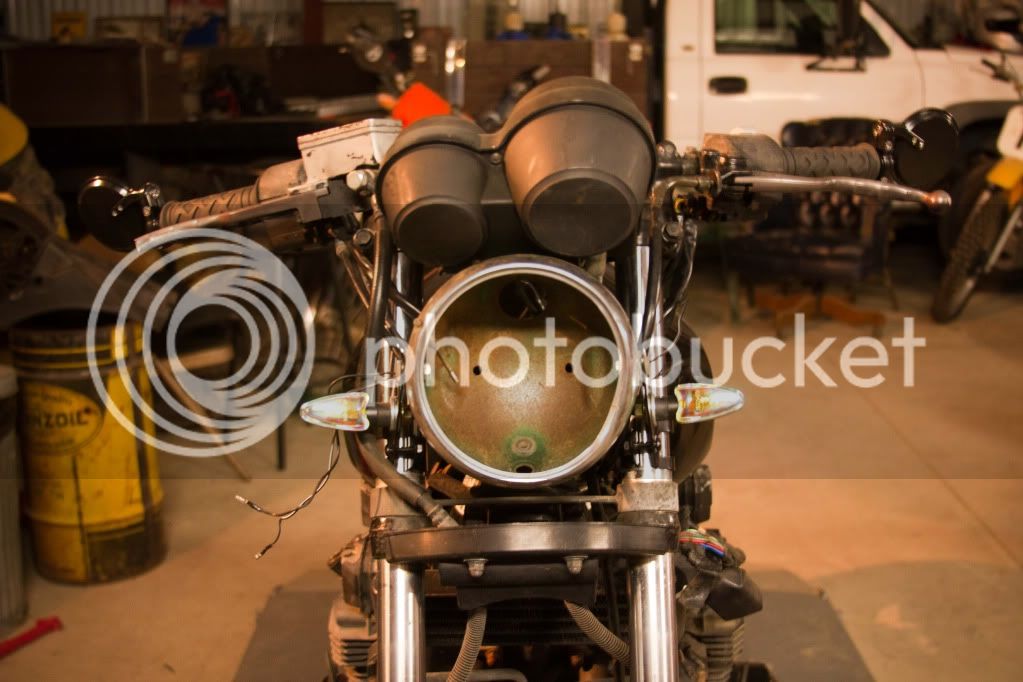 Another angle. Front turn signals I bought off of Amazon for like $15 I think. They were smaller than I thought they would be, but they are surprisingly bright. I'm pretty happy with them so far. Also a set of bar end mirrors from egay. 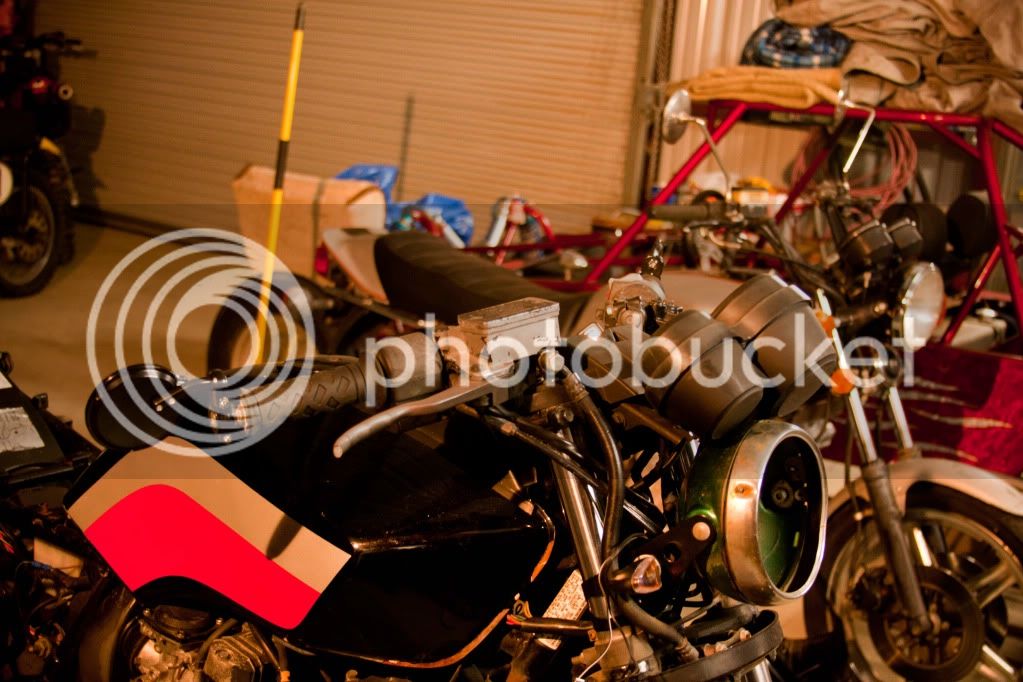 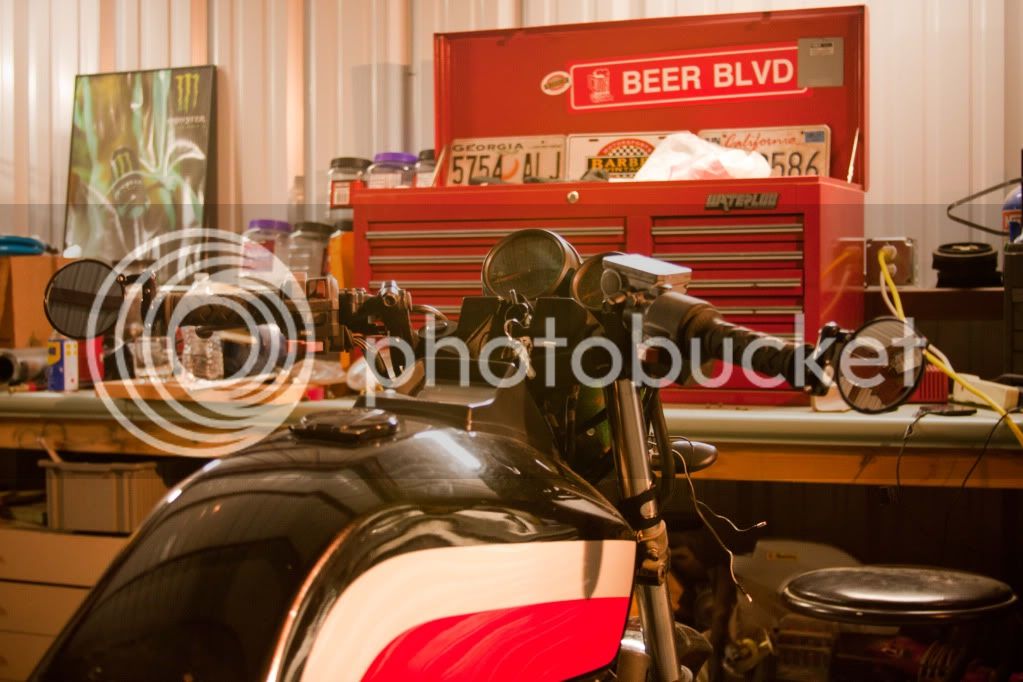 I decided to trim down the profile of the bike. I removed the grab bar that was behind the seat, and the side hand rails right below the seat. I also removed the huge rear fender and tucked the taillight under the edge of the rear cowling. I made some brackets using the existing holes where the rear grab bar used to be to relocate the rear turn signals. I only bought the one set of smaller signals from Amazon, because I didn't want to buy 2 pair if they were just pieces of garbage. So for now I reused the original rear turn signals, until I decide what ones I want back there. 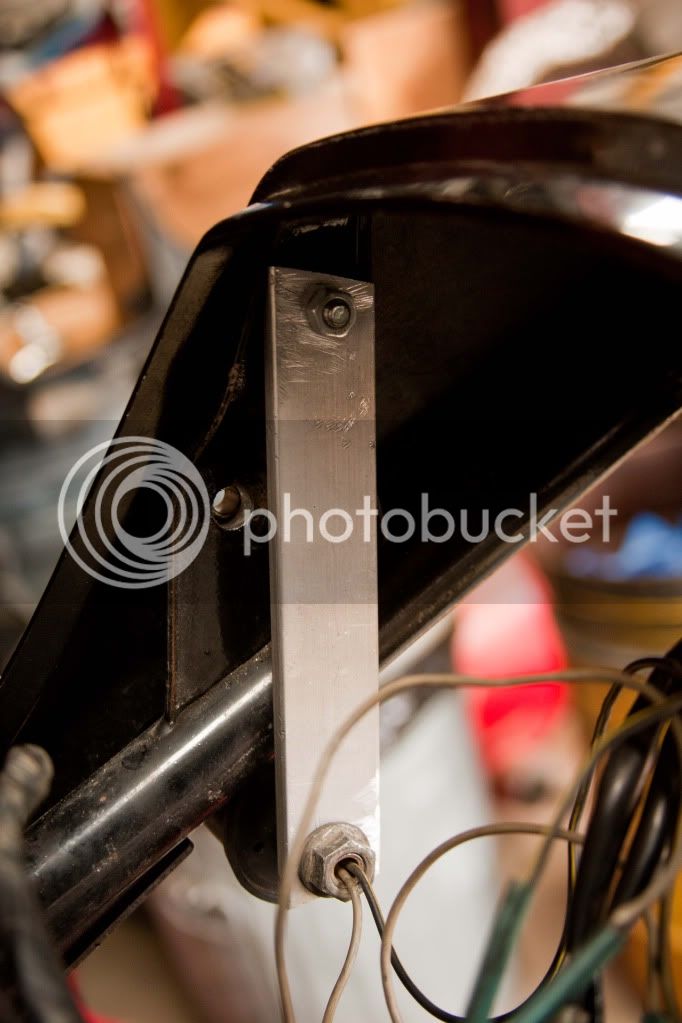 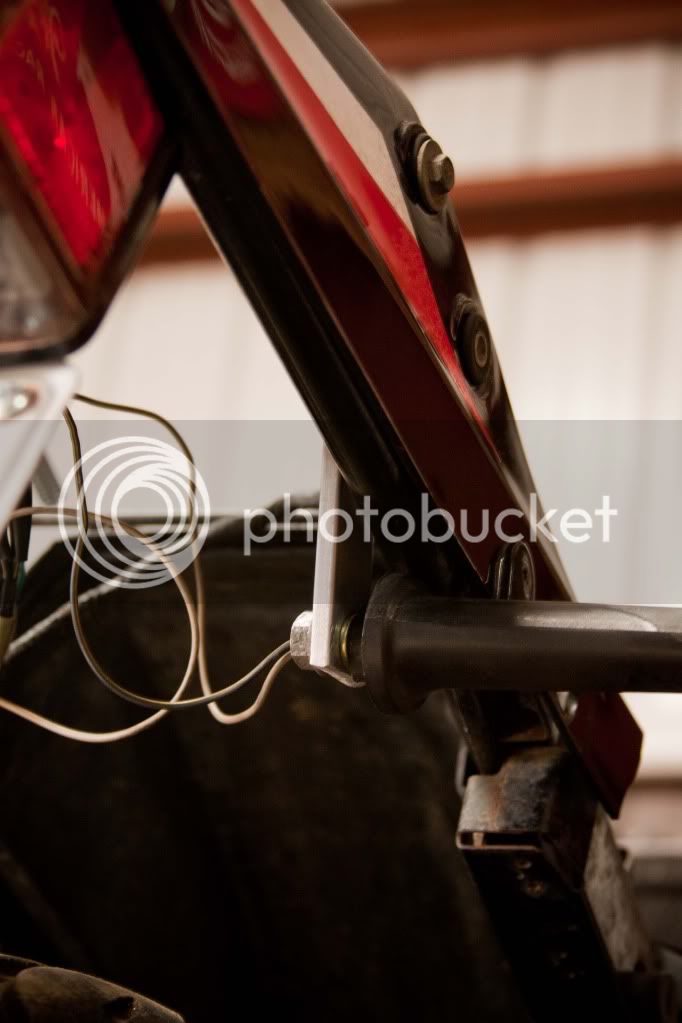 I made some brackets for the brake light and tag relocation. The brake light is now tucked in underneath the rear fairing. I used the existing holes in the rear cross piece at the rear of the frame. It worked out perfectly to position the light right at the edge of the tail section. 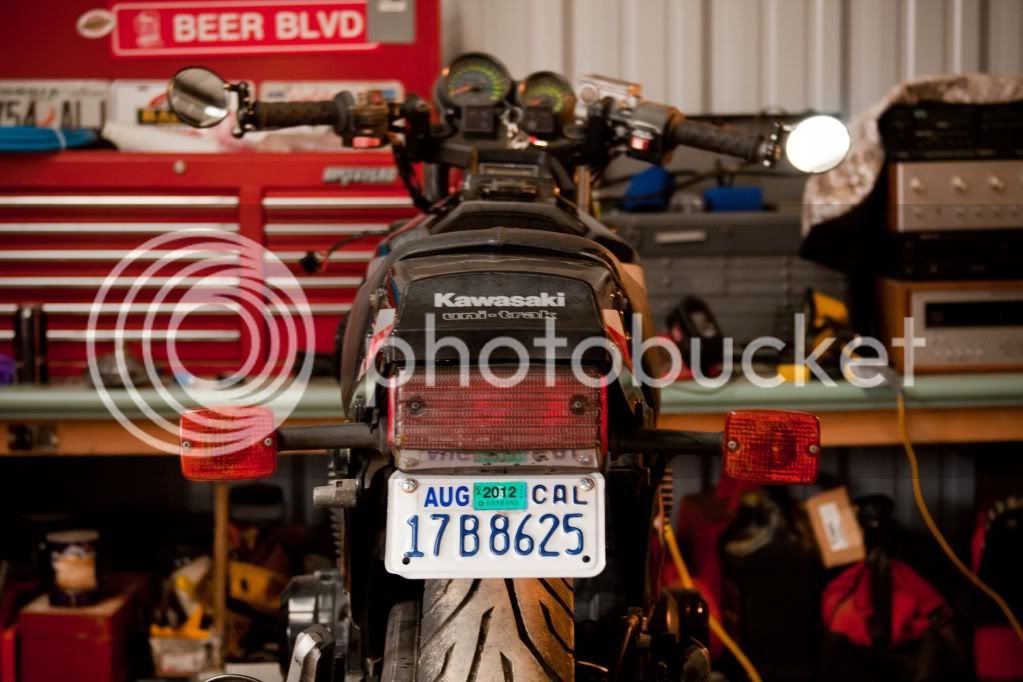 Here are some quick photos after I got finished up today. Bike is dirty as hell, and it was cold as shit outside, but you get the idea. This is still with the original light that I ended up taking off, but it was too dark out to get some new pics. I'll try to take some more updated photos this week. The bigger, black CB750 head light looks worlds better.
After removing all the fairings off the bike, I soon realized what my next project was. Complete motor cleanup. Can't wait to get all the old grim off there. 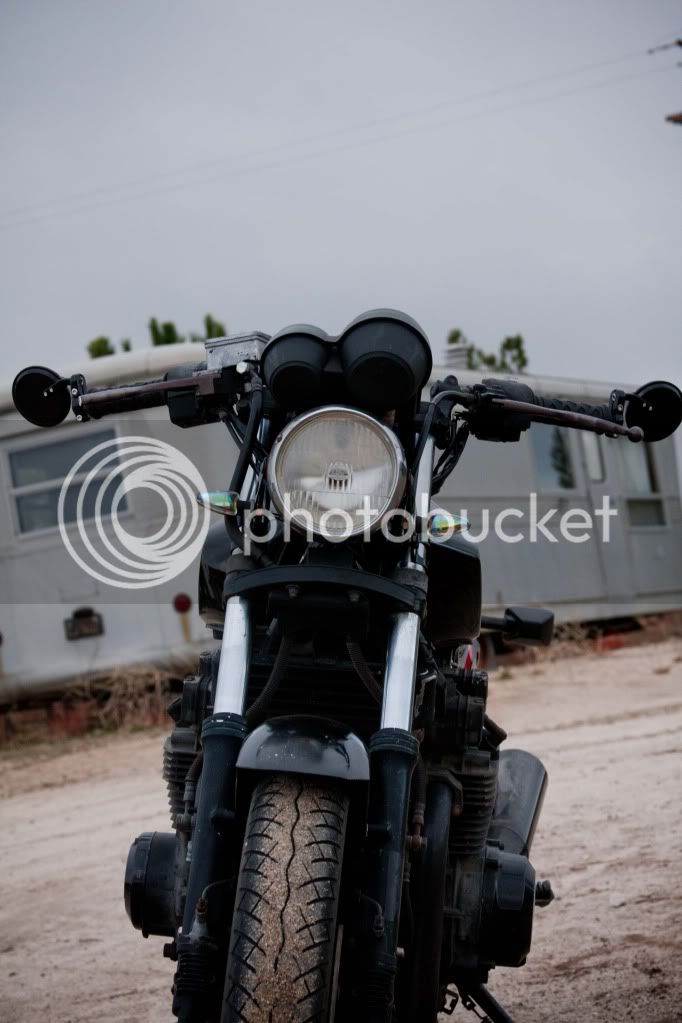 I'm going to get some plugs for the old holes in the rear tail section that are no longer used by removing all the extra baggage. 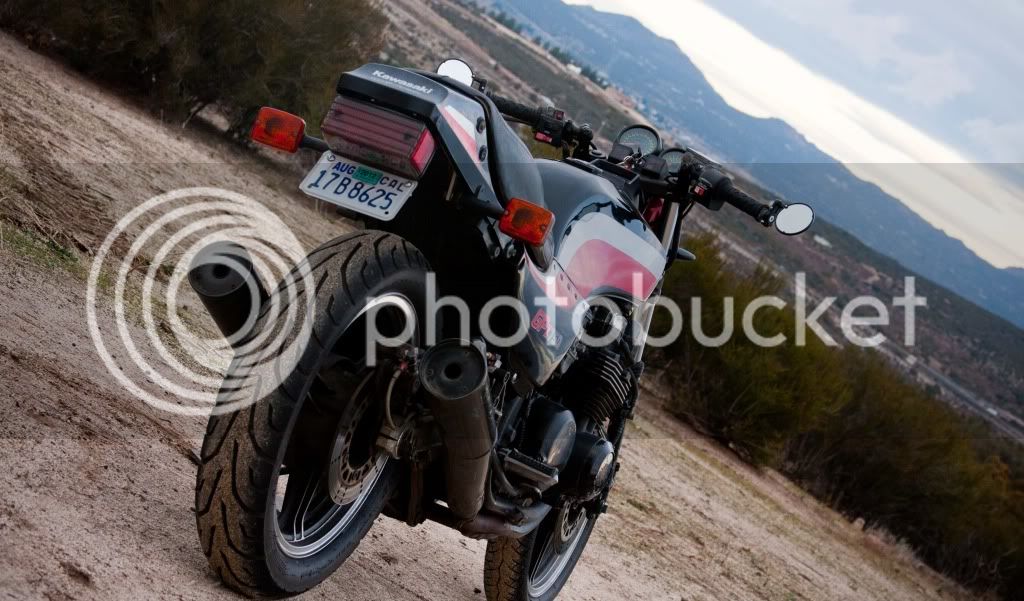 Can't wait to get some new rear turn signals. But reusing the originals worked in a pinch. By using the brackets I fab'd up they are tucked in a little bit more then they were hangin off the old rear fender. 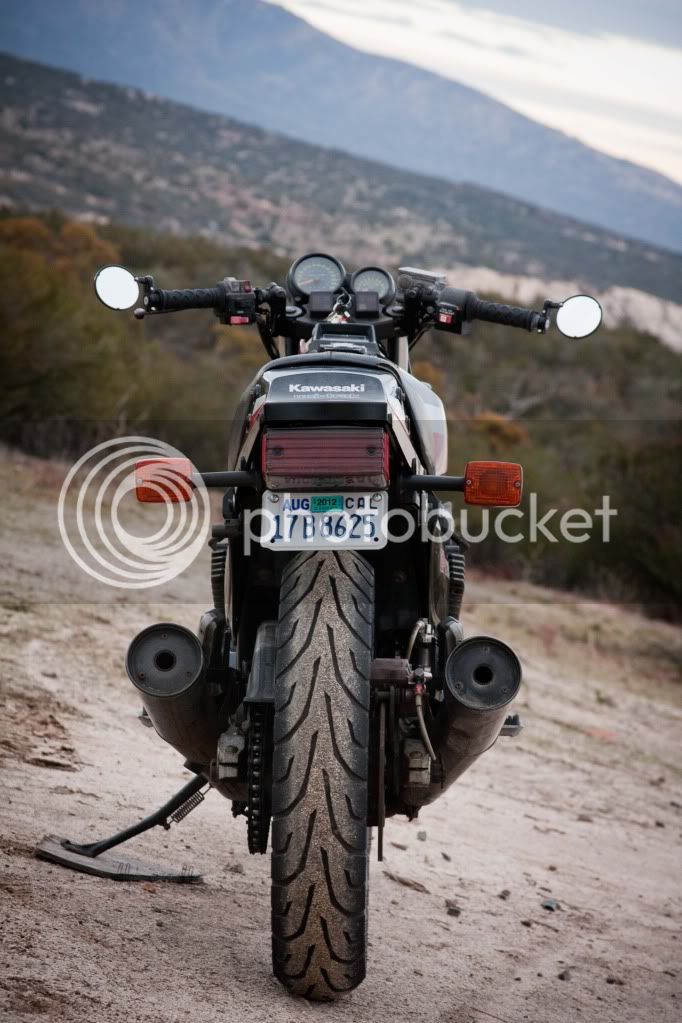 Again with the old headlight. I'm so glad it didn't actually work, b/c the new headlight looks SOO much better. I will grab some photos this week. Still not decided on the position of the bar end mirrors. I had them turned down, but I can see much better with them rotated the other way. Gonna try them both ways for awhile until I figure it out. 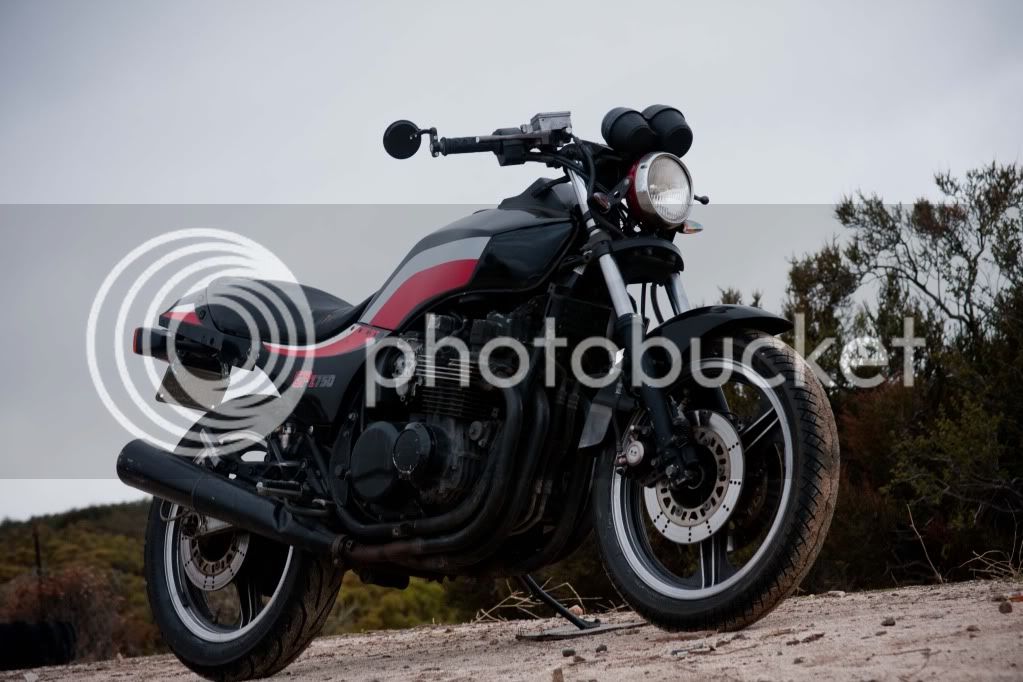 I also removed as much extra weight as I could from the bike, without getting into a serious tear down project. I took off any brackets that were no longer serving a purpose, horns, horn assembly, heavy ass center stand, etc.. After removing all that, the front fairing with all the bracketing that was included in that whole deal we estimated that we probably dropped about 30lbs off the bike. Wish we would have actually put the box of removed parts on the scale, but used the old faithful guestimation method instead. It is definitely alot of weight removed for as little things that were removed. The container that I put all the removed bolts, nuts, washers, etc from the parts that I removed weighs at least 5lbs.

I wish I could describe the difference it made in the handling, and overall feel of the bike. It turns so light and easy now, without that "digging in" feeling the front end had before. It's seriously like night and day. 30lbs goes a long way, now if I could just lose about 20lbs it would be even better

Can't wait to get the bike cleaned up this weekend, and will update this with new progress. There will be plenty of new hq photos coming soon!

I really love these bikes in stock form, but cool that you're happy with it, as that's all that matters. have fun

Took advantage of the beautiful post-xmas weather here in beautiful San Diego, drove around the city for about 5 hours. Took a few new shots..