Happy New Year all!
Haven't done much posting lately so starting again is one of my resolutions
So here goes then....first some background...came across a '96 CB500 the best part of a year ago, they're a bike that appeals to me since as I come from a BSA/Triumph background, then anything with 2 cylinders, twin shocks, right way up forks and a cradle frame is nice and familiar! 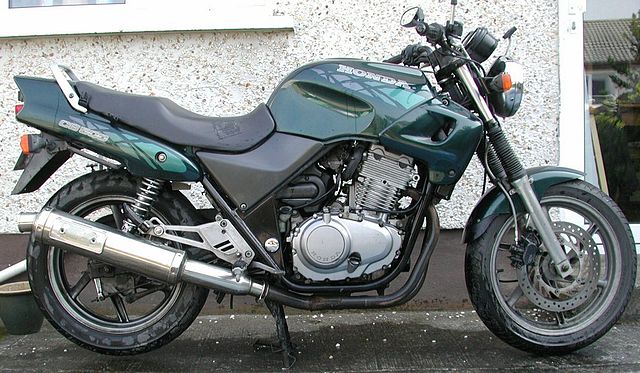 So, my initial instinct was to take it completely to bits, chop it up and see where it went.....
The reality though is that its a decent bike already if a bit bland looking, so over the summer I designed a new set of panels for it.... 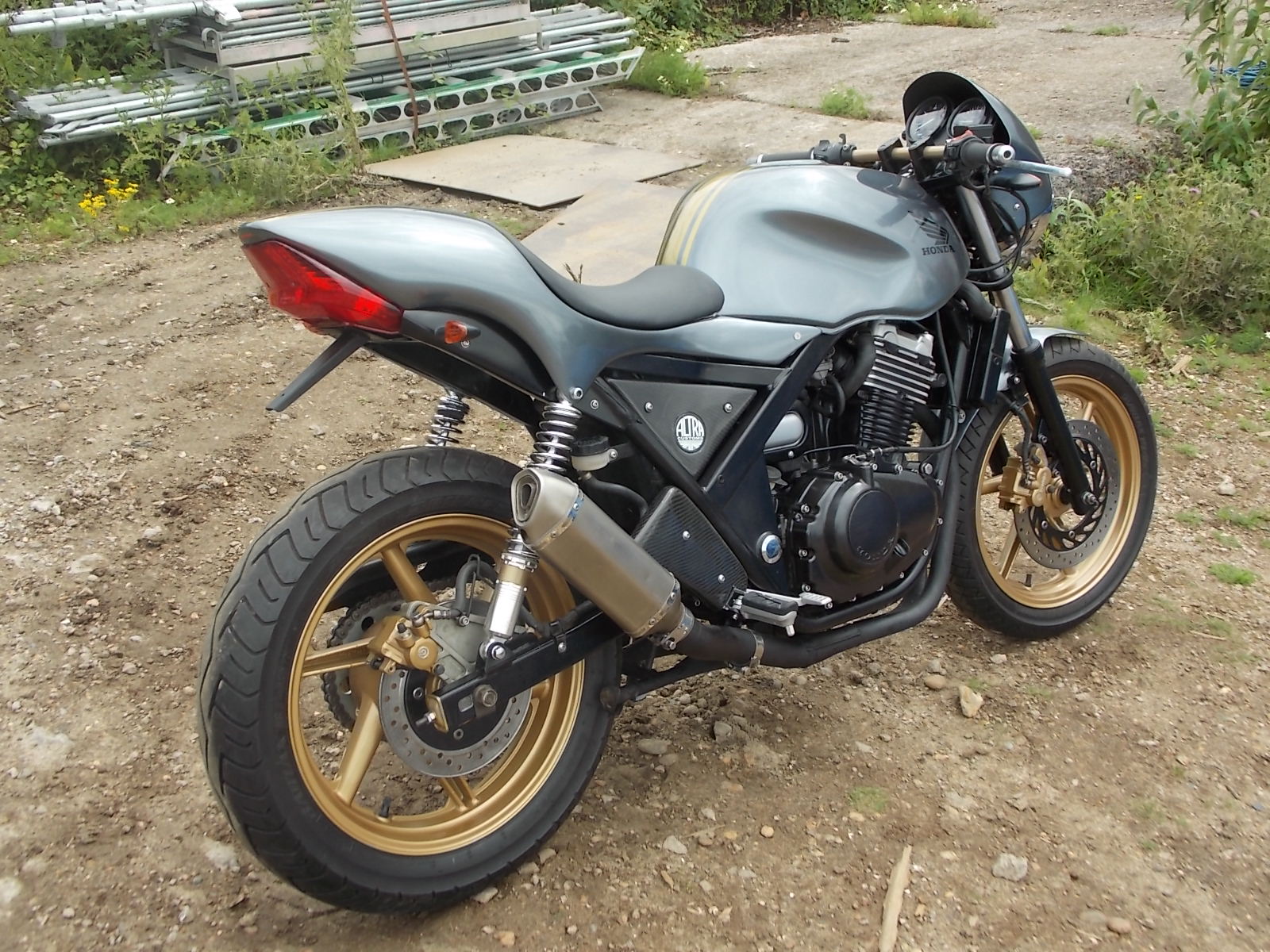 Apart from the exhaust and some minor suspension mods its stock mechanically....and that one is finished and going to stay that way!
Have now bought another which I'm going to town on...new frame, new suspension and the same bodywork in carbon fibre....with the main aim of getting its dry weight down to 325 lbs max
My intention is to have it built and competitive for Bikesheds cafe racer cup in August
More later....

DTT SUPPORTER
DTT BOTM WINNER
I love this, and the improvements you've made. Really well transformed, into something that looks how it should've from the factory imho.

Hurco550 said:
I love this, and the improvements you've made. Really well transformed, into something that looks how it should've from the factory imho.
Click to expand...

I agree completely. If I saw the "before" and the "after" beside each other on a showroom floor the after version would be the one making me want to open my wallet. Nice job.
Last edited: Jan 1, 2021

Thanks for the kind words!
This new build will be visually fairly similar, forks/front brake will be uprated a bit....mk2 Bandit most likely (which are an easy fit to the CB500 headstock btw!) and going for spoked instead of cast wheels....
I've used Bandit forks on other builds before and the hub from either an NX or FX650 fits easily, and a 315mm disc from a Pan European has the same bolt pattern and matches the Bandit caliper....only room for one disc but more than enough stopping power even so... 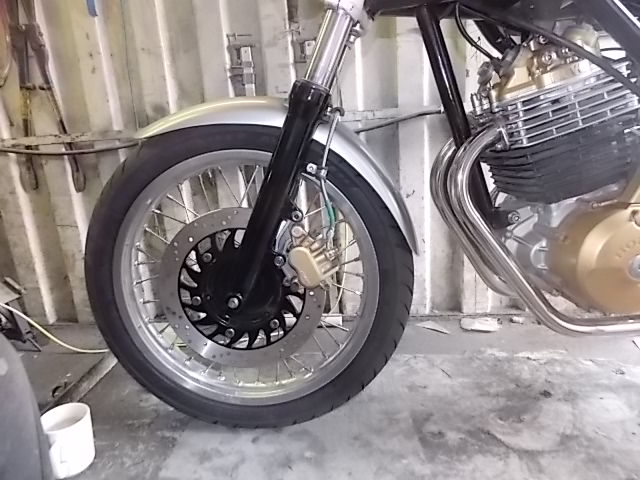 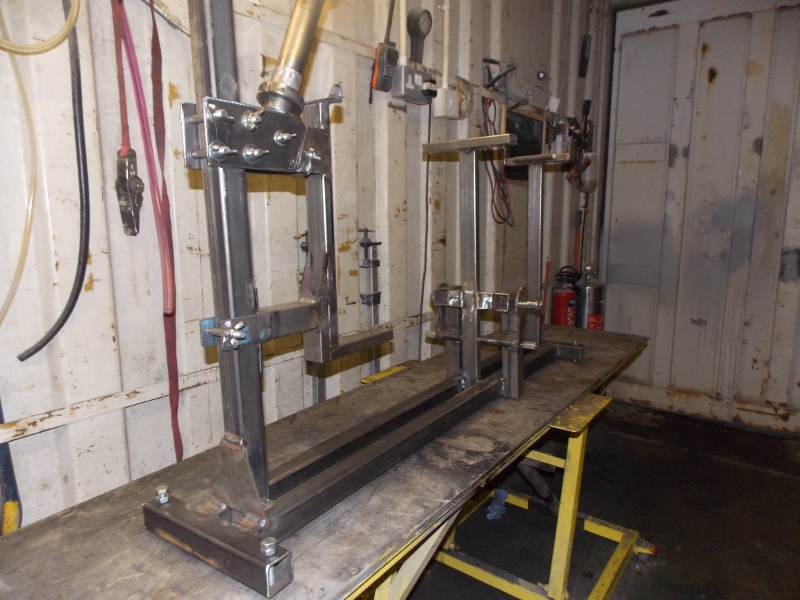 But for this bike it'll raise as many problems as it solves, so am making a start on another
It'll be a fairly straightforward job as I'm sticking to the original Honda geometry so can use a stock frame to make a new jig
B

cool as. love the gold wheels. - that on it's own makes a huge difference, and they're not a bad looking wheel as far as that goes. the std bike is certainly fully blanded out colour wise.

is there a market for that sort of bolt on bits? or have most of them been couriered to death?

i remember about that time fast bikes (i think) did a "race" where they got one of these and probably a gs500 and some sort of kawasaki and maybe a 600 monster, dressed up in the respective wsbk racers leathers and hit up a track day or club race meeting. was a pretty funny article.

In the UK there are still a good few about Brad, and a very active (well not last year!) racing series.... It's all about the preperation...

www.fastbikesmag.com
This build won't be eligible to race in that series as way too modified but intended to be ready for this....if it goes ahead that is

Bike Shed Festival – Bike Shed Festival by The Bike Shed Motorcycle Club
As for selling the panel sets....if someone wants a set I'll make one....but not that concerned either way....for me this is fun not work....
I did much the same with my 650 Honda design a couple of years back.....after I'd done the first one....ended up making 8 more in the end! 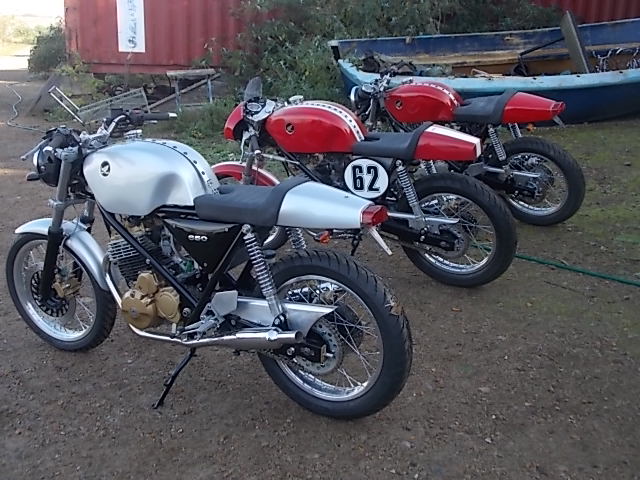 your 650's were cool. the bike shed thing is something to focus on anyway. every project needs a target.

So, making a start on the frame jig....
As I'm sticking with stock geometry I'm using an existing frame (which I've had checked for alignment) to make it from
First step was to tack in a brace from the front engine mount to the swingarm pivot and then chop off the lower frame rails 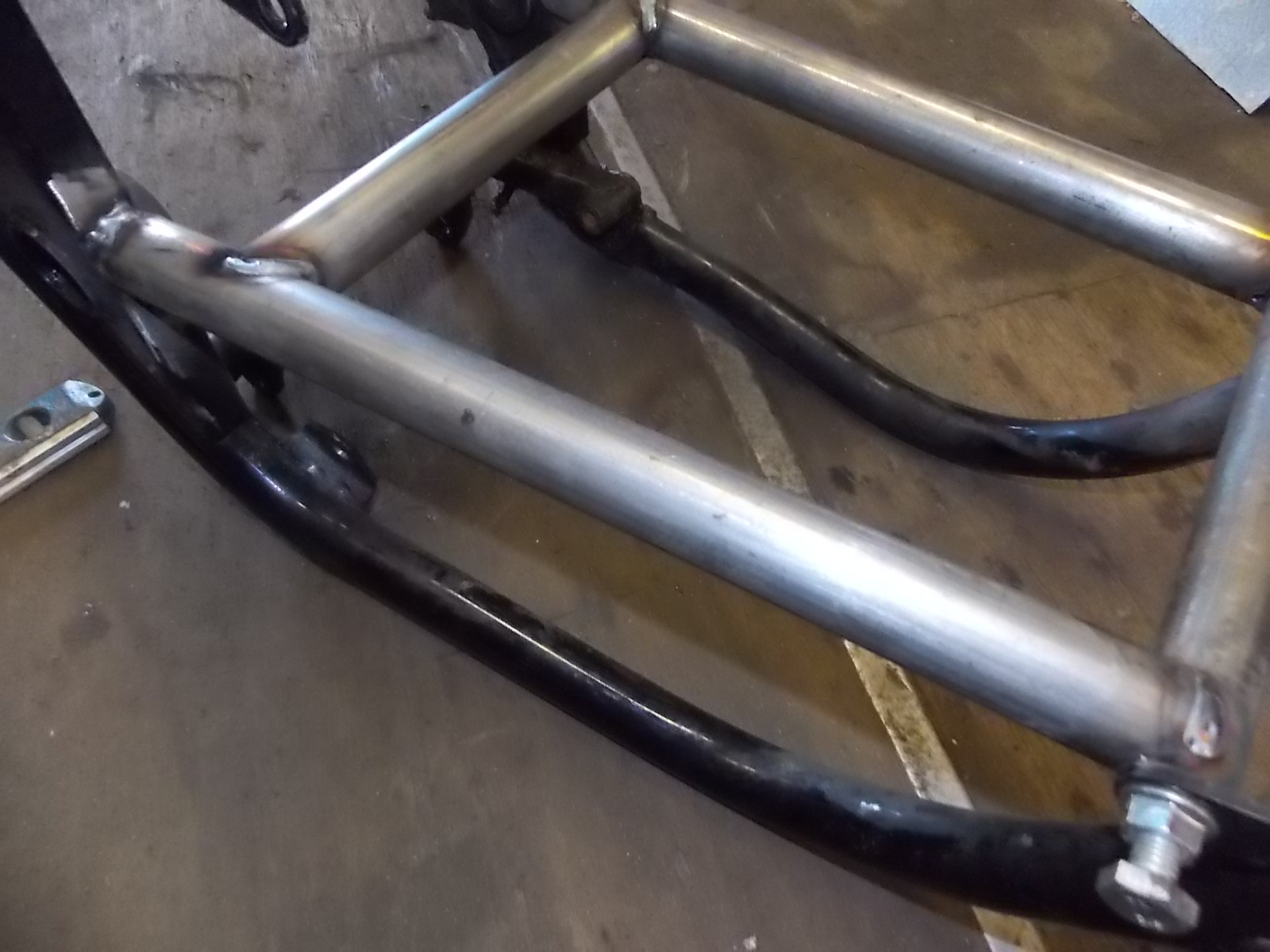 And then, using whatever spare bits of steel were lying about to make my jig.... 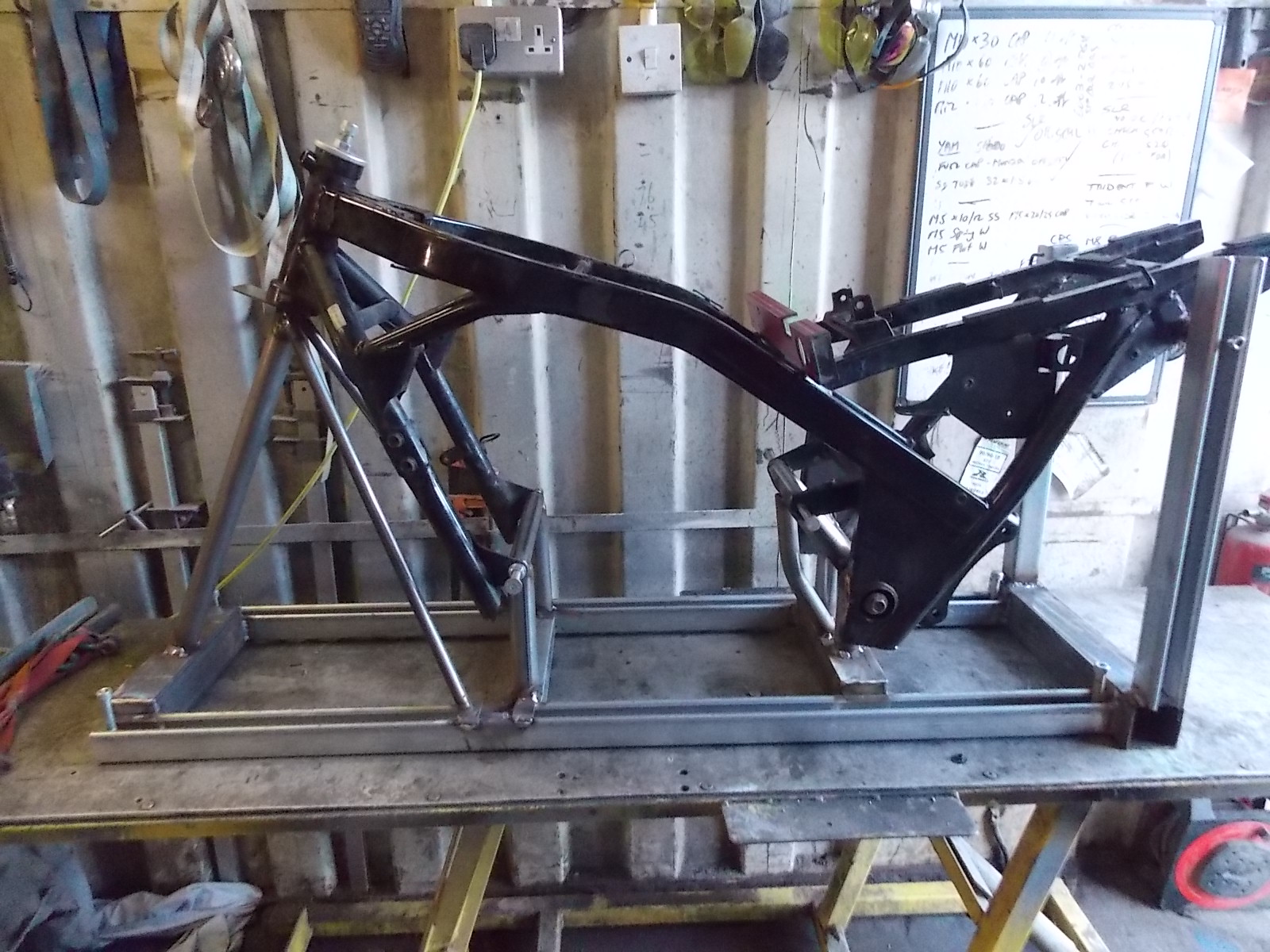 That gives me 5 crucial points to build the new frame around....headstock and swingarm pivots, rear shock mounts and 2 of the engine mounts.
Oh, and btw, there are sketches I've done of where everything will go but since my drawing ability is, frankly, awful....I'm keeping them to myself!
But think sort of a cross between a Harris Magnum and a Ducati trellis....with a dash of Paton!
Last edited: Feb 25, 2021

DTT BOTM WINNER
Very nice. Looks like a factory update/refresh. And I mean that in a good way.

Its been way too cold to make much progress lately but better today so here we go.....
I've been wanting to sort out the conversion to Bandit forks, both for this bike and to see how easily they can be fitted to the stock CB as well, from a bit of research the bearings to convert the Suzi yokes to the Honda headstock are 32005 and 32006 taper rollers....
I like using the Suzi forks for a number of reasons....larger diameter than the Honda, better brakes, a nice easy mudguard mount and since there are so many different models of Bandit....a big choice of fork springs so you can pick the rate you want without spending loads of money!
Anyhow, here we go.....and a problem straight away....the Honda uses ball instead of taper bearings....and I could not see any way to get the outer races out...nothing to get a drift onto at all....completely flush with the inside of the headstock. I tried asking nicely but nothing happened....so took drastic action! 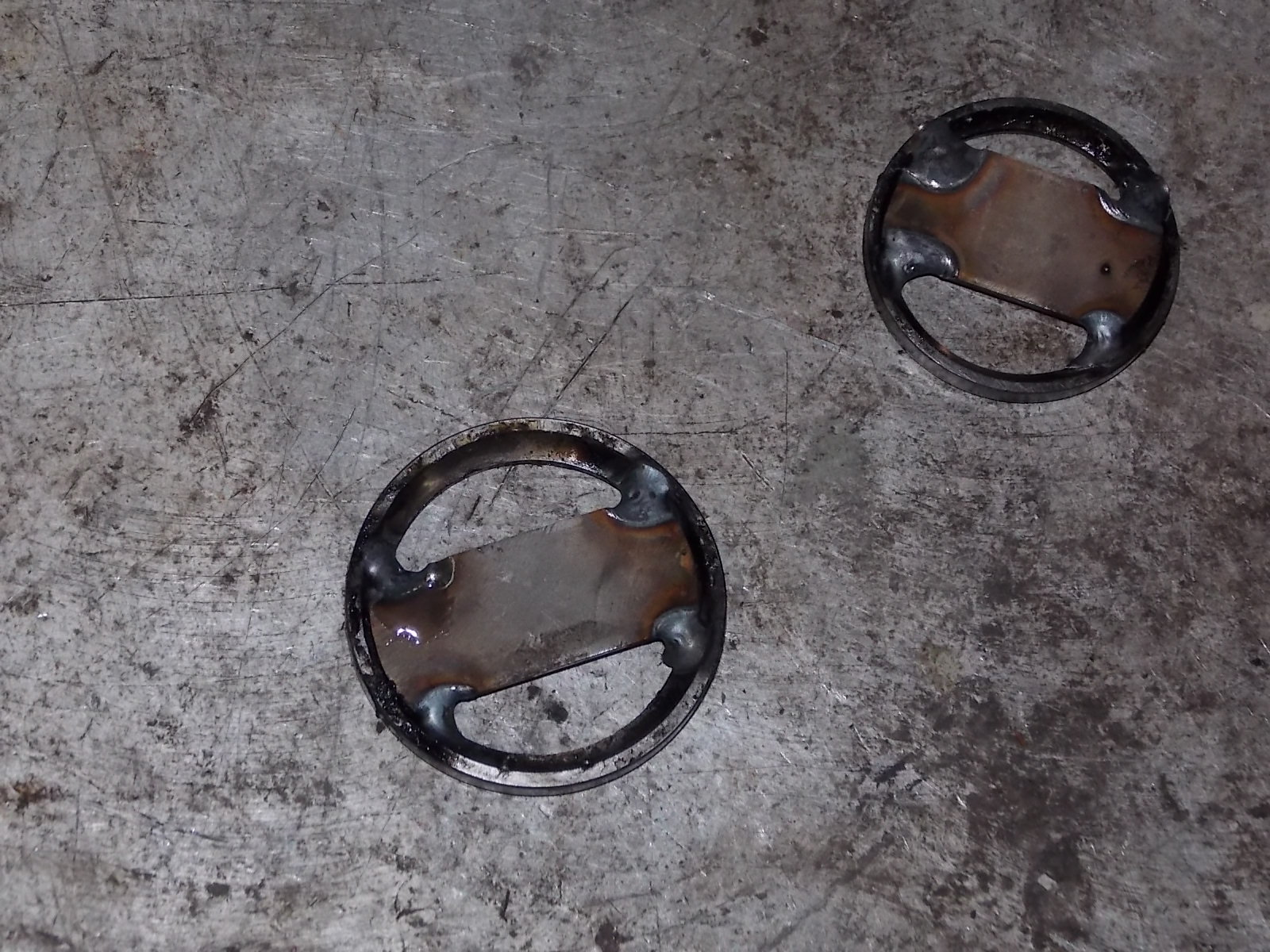 The new races fitted fine and then the second problem.....the Bandit stem was 20mm too long
Going to eventually have to press the old stem out and get a shorter one made up....but for now....I did this! 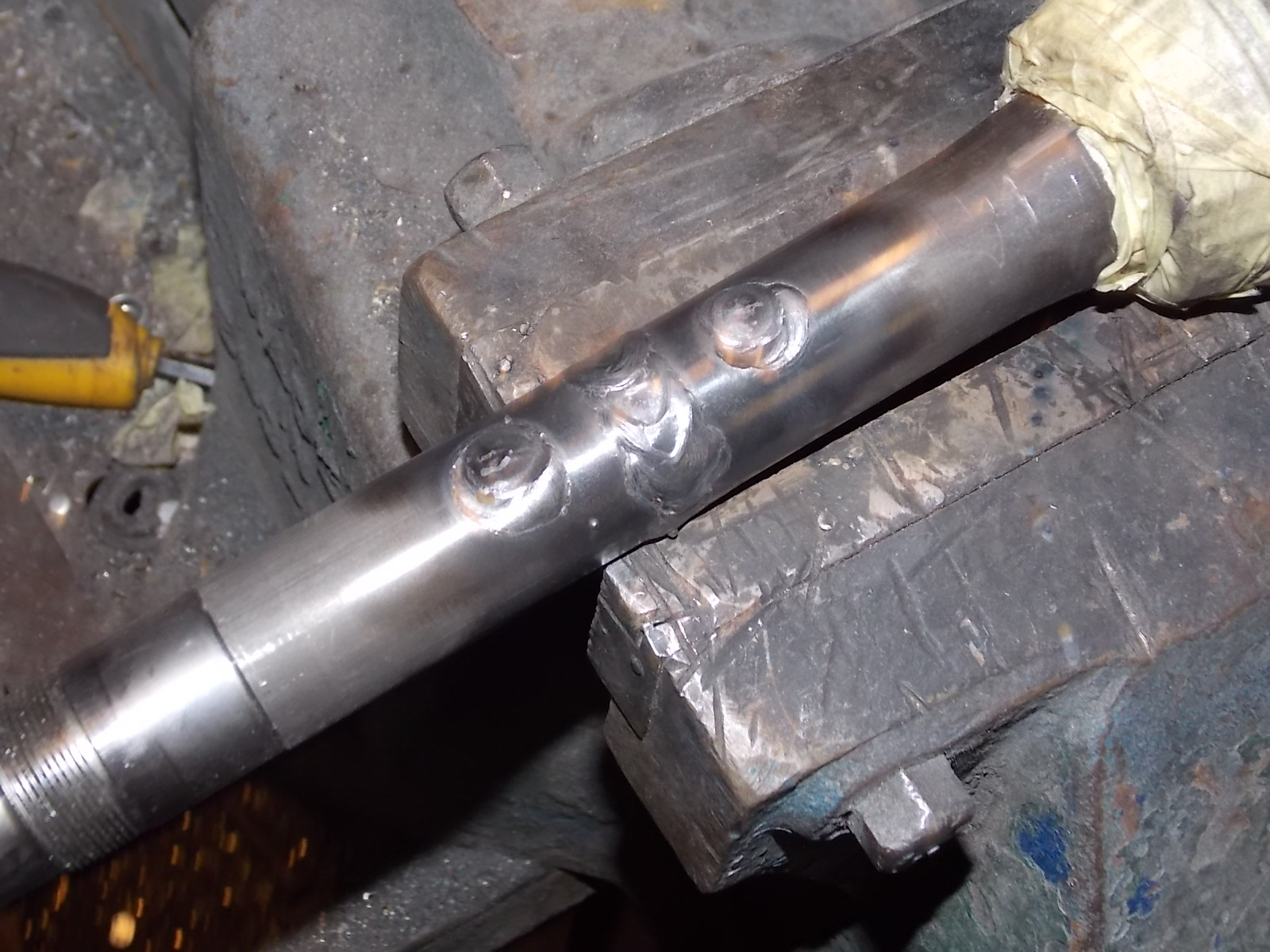 For a try out it is, I think, good enough....and as it happened the stem id was an interference fit for a piece of an old Honda wheel spindle...which kept things reasonably straight....plus I pinned it as well
After that....no problems....forks fitted and done! 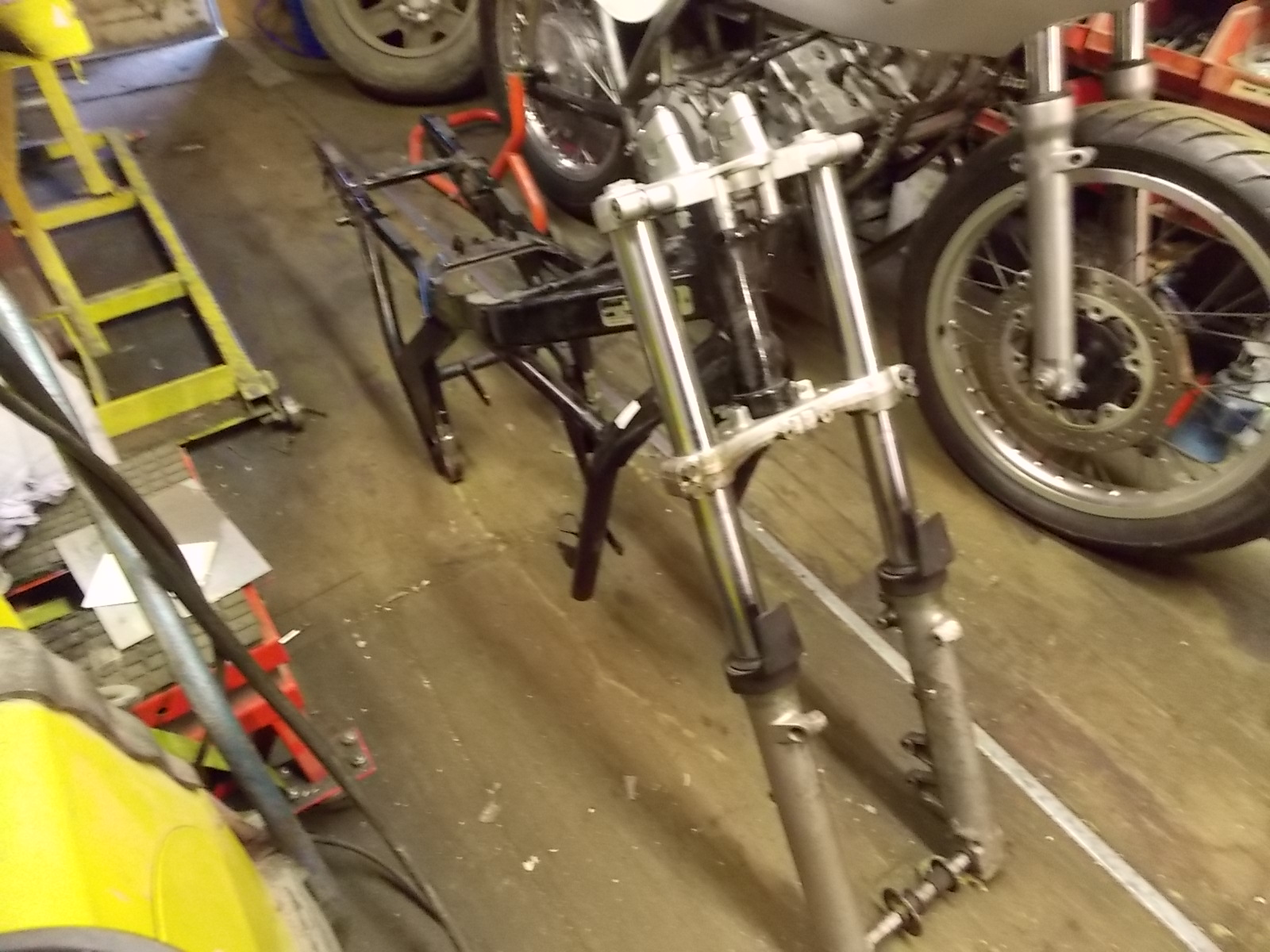 Swapped over to some fibreglass work....just for a change!
I've already made all the panels except for the tank, and the plan is to make a small-ish aluminium tank....round about 2 gallons....which will bolt directly into the frame with a composite (maybe grp, maybe carbonfibre) cover over it. I shan't be making that yet as still undecided whether I'm sticking to carbs....or fuel injection....in which case I'll build in an in-tank pump.
So, the cover will be a direct copy of the stock Honda tank....needs to be a 2 piece mould so I lay up half the tank to a masking tape line down its middle....the black marks aren't my greasy fingerprints btw....its black pigment from the job I was doing before! 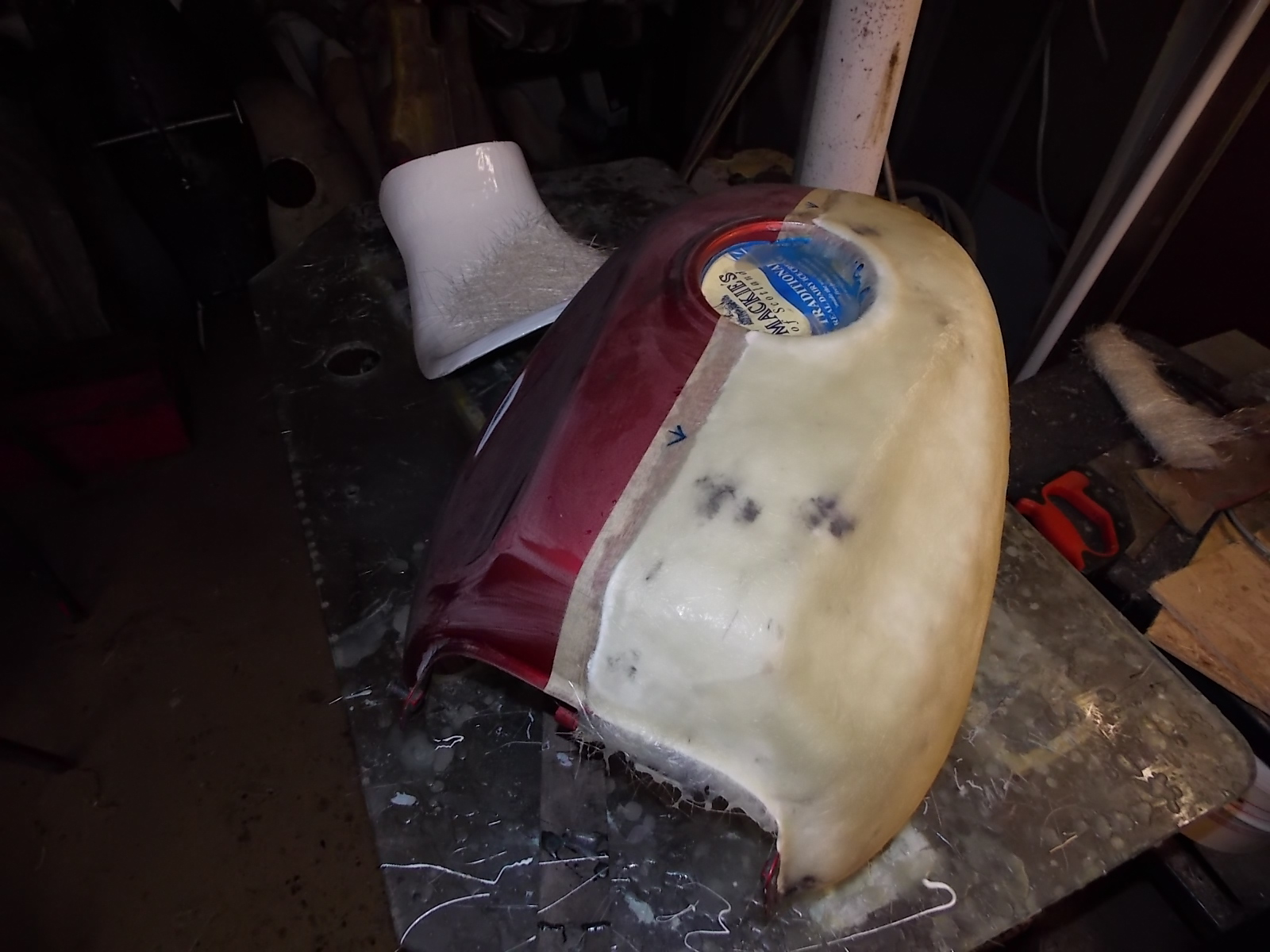 Then its trimmed to the tape line, laid on its side on a sheet of glass and a flange made....
Then put back on the tank and the other half laid up...... 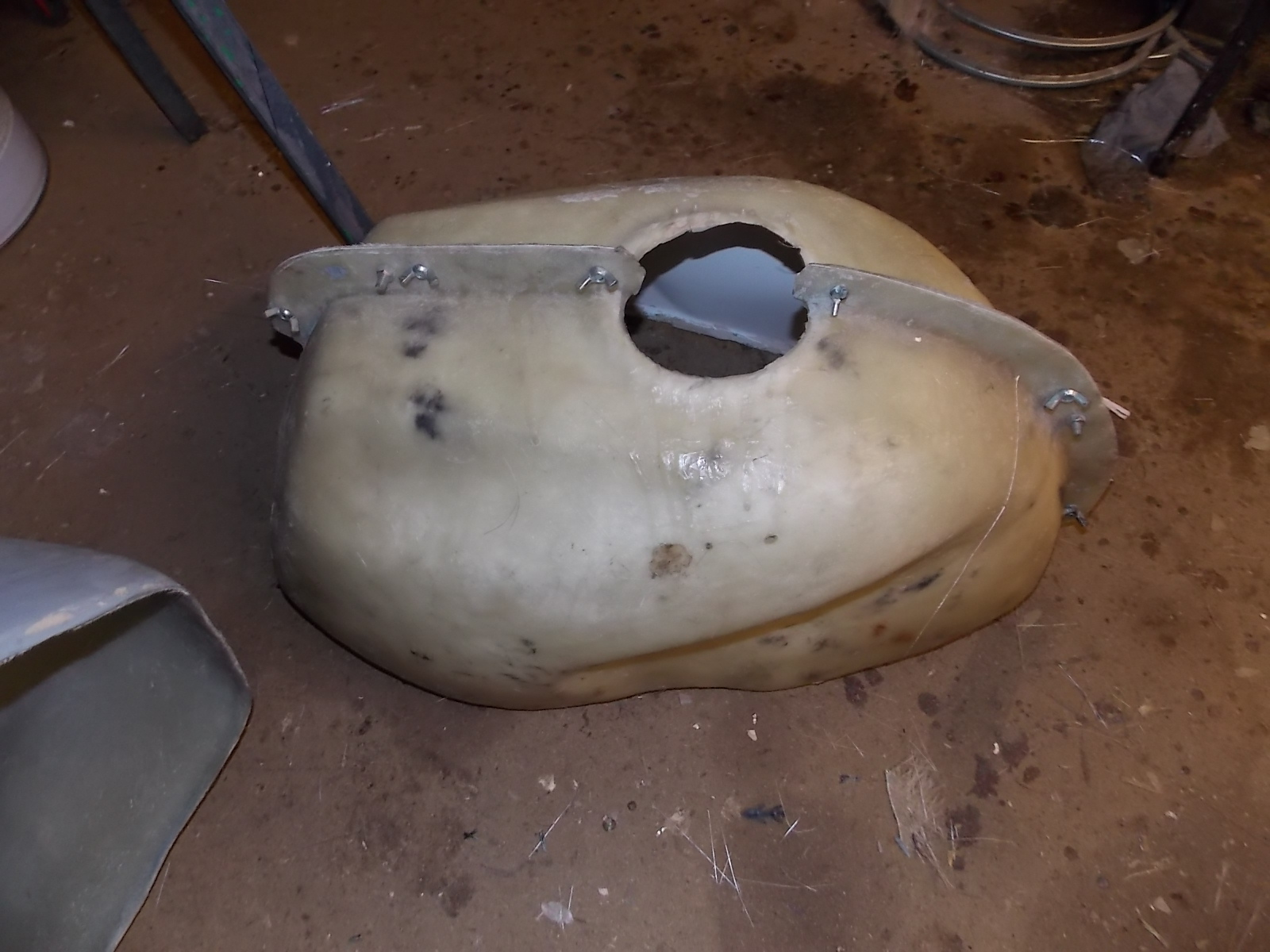 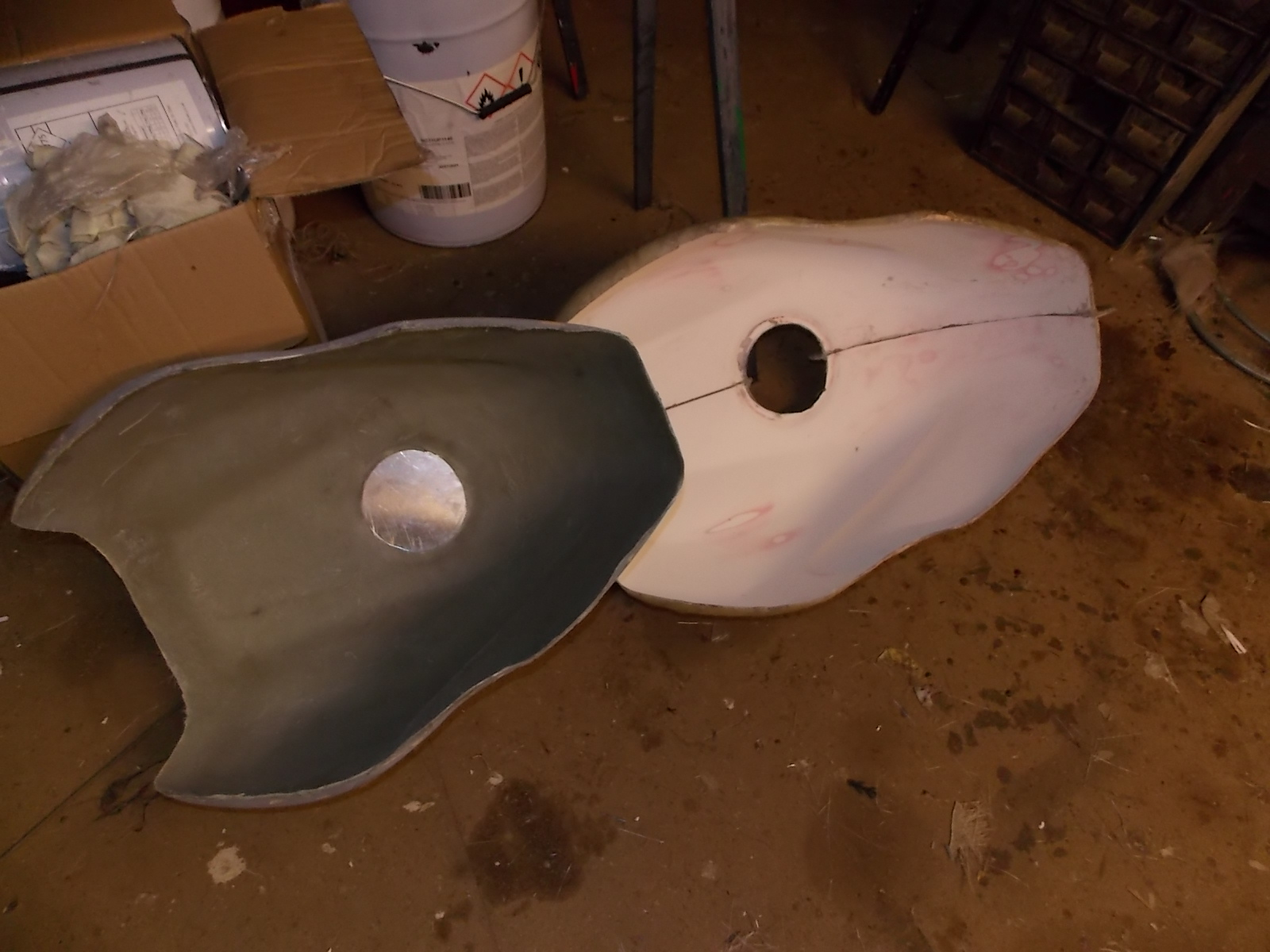 DTT BOTM WINNER
Tanks and cover for an RD350 based drag racer. Similar idea but only need 1 gallon capacity for the rules. 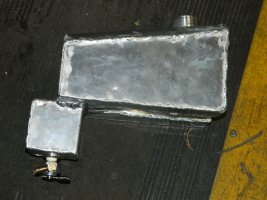 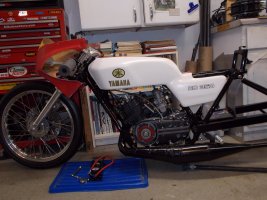 I like the quality of your work better than mine though.

Thanks....but thats probably just the grass is greener....I only put up pics of the things that work out ok!
But ali tank/grp cover is the way I go with any bike nowadays.... 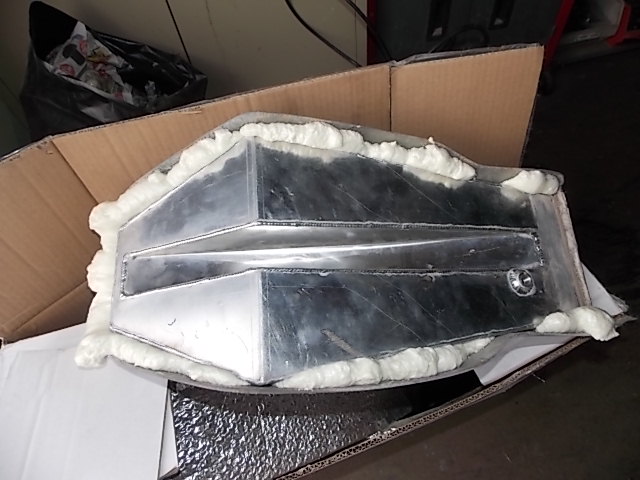 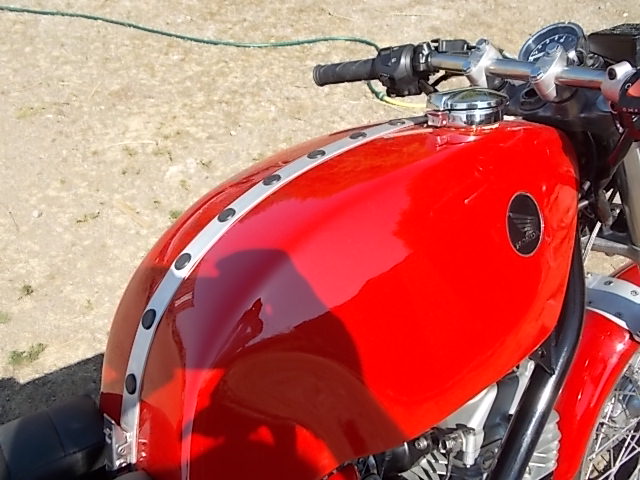 And heres the cover on the old frame along with the seat moulding I'll be using..... 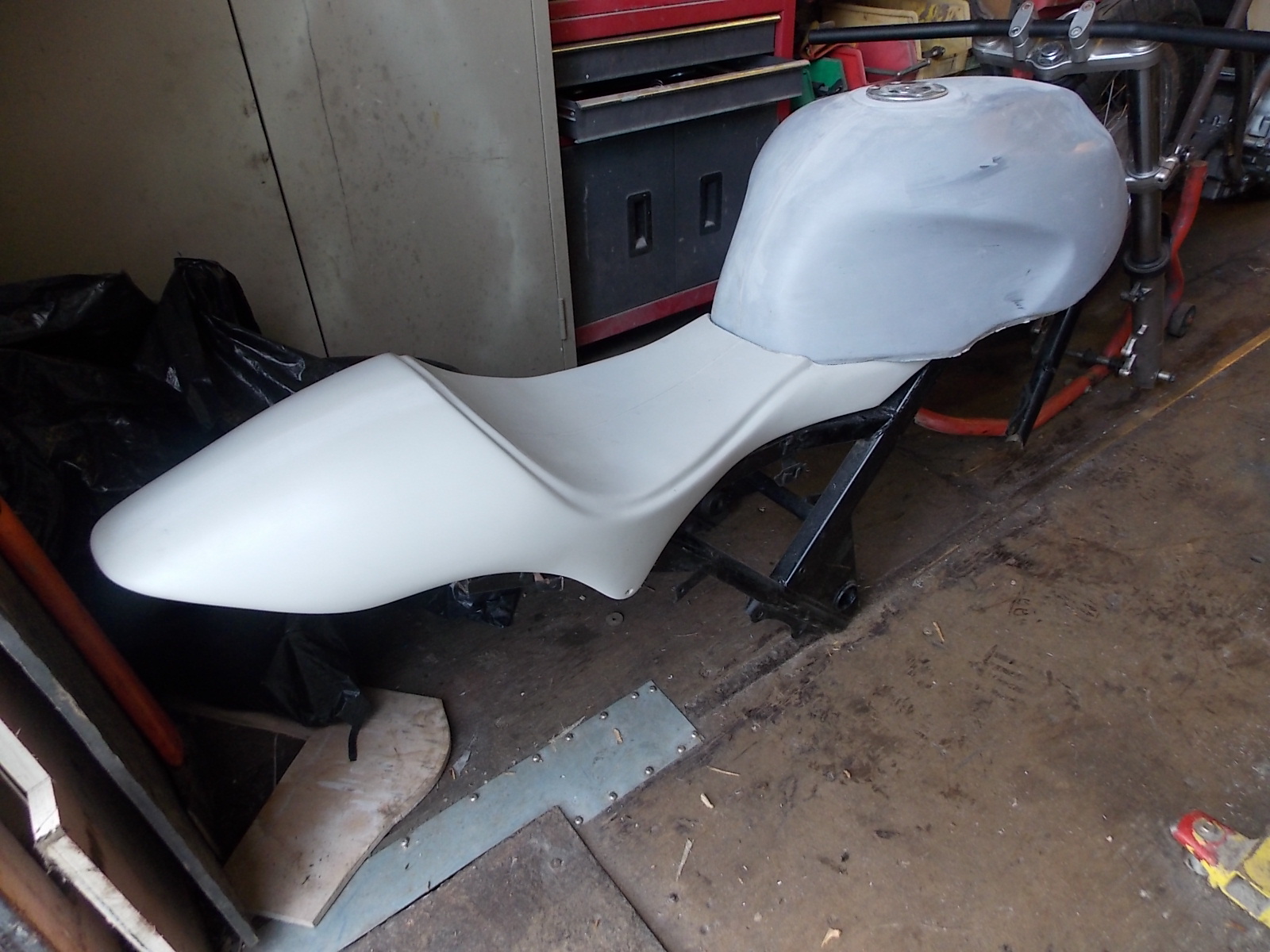 And btw, the 'marble' effect on the tank gel coat is just me not bothering to mix pigment in properly.....!