Hey everyone,
Got a non working 80? Gallon from a buddy, it's missing some pieces, I'm hoping someone here can help me figure out what it needs to be operational again. I've never worked on one before so I dont know what things are called so bear with me.....
It's missing on the motor in 2 spots whatever goes under the rounded covers. 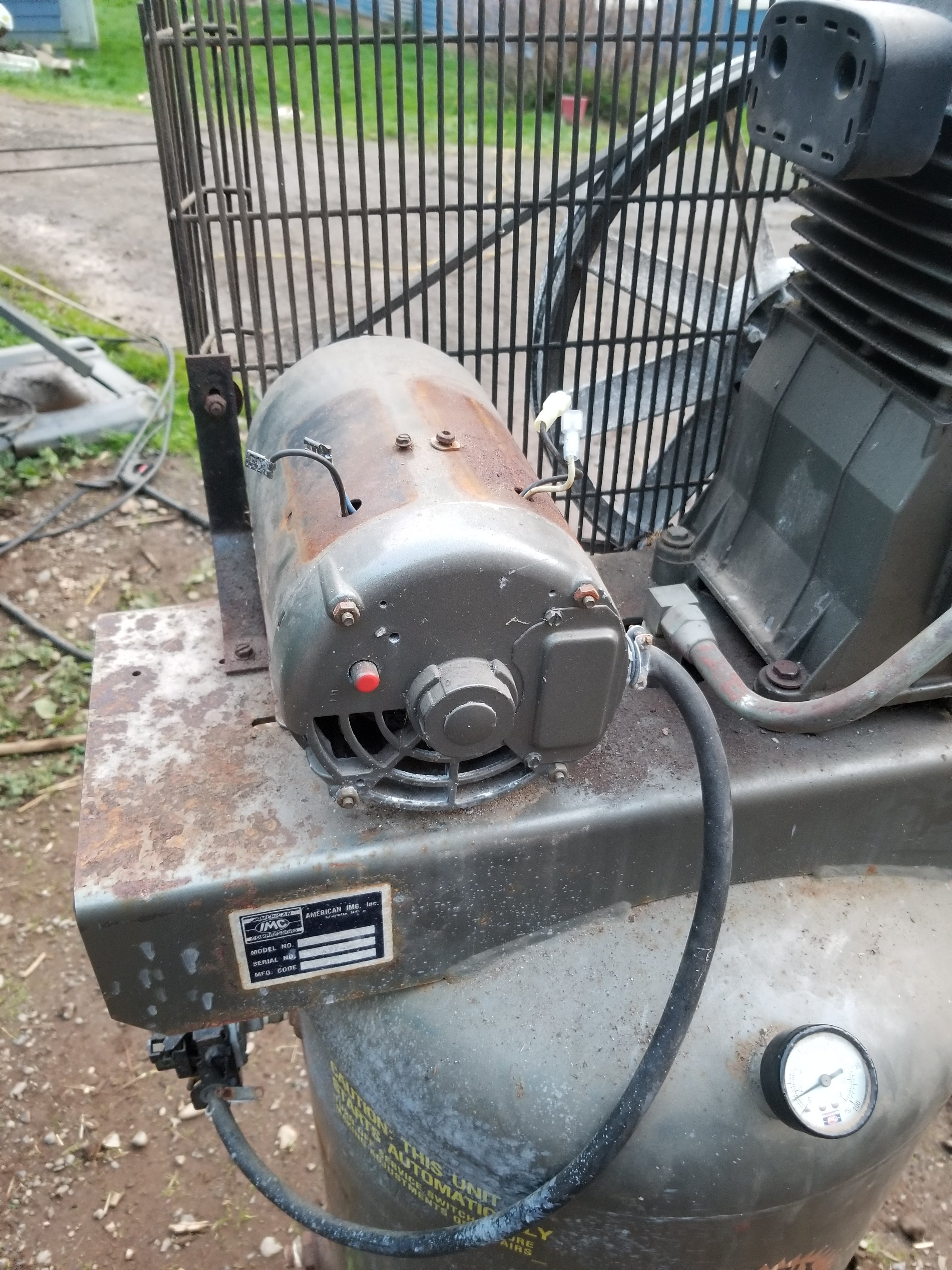 This next piece hose a small white hose broken off in the switch. 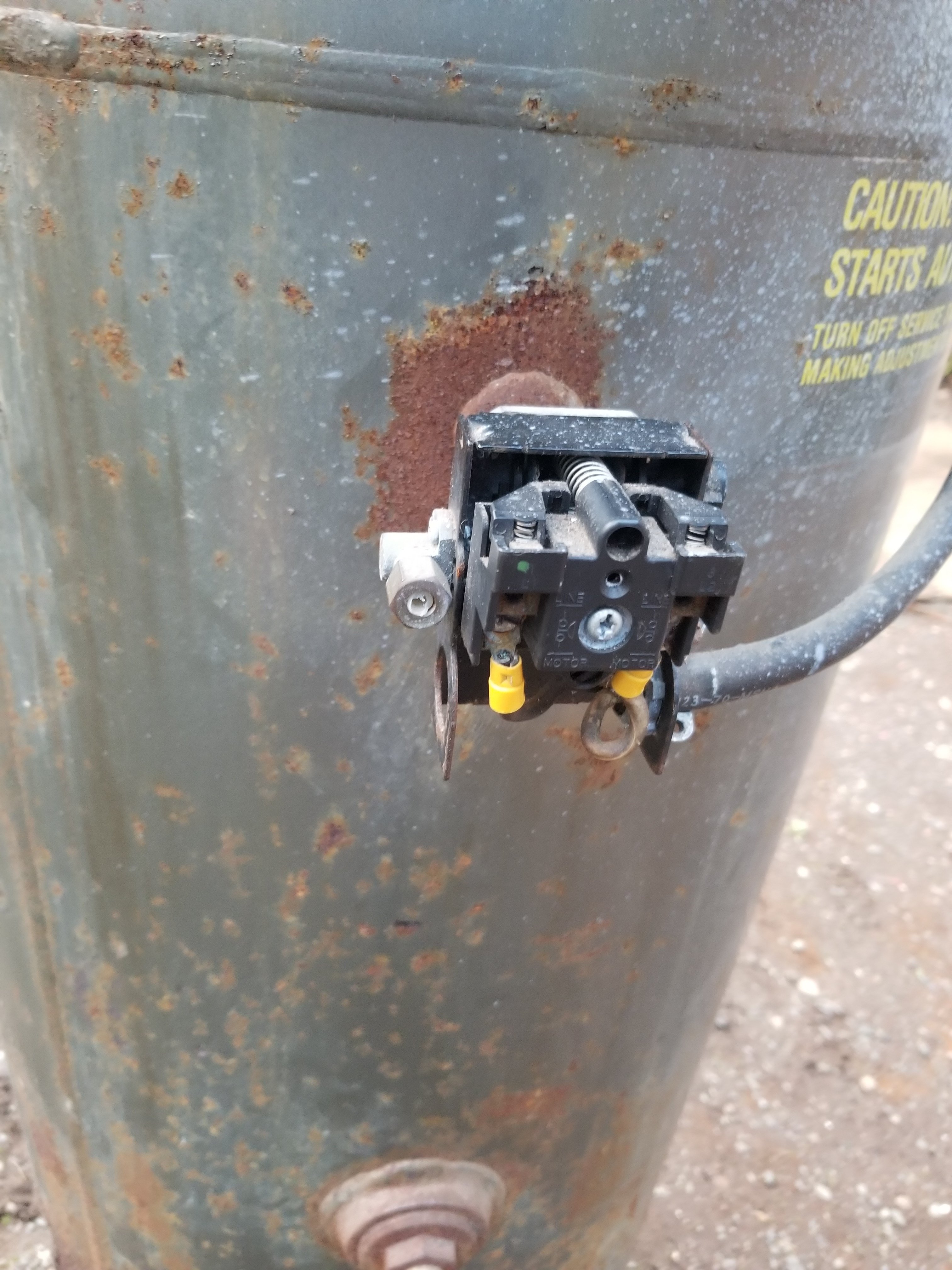 Then can anyone tell me how many phase this is? 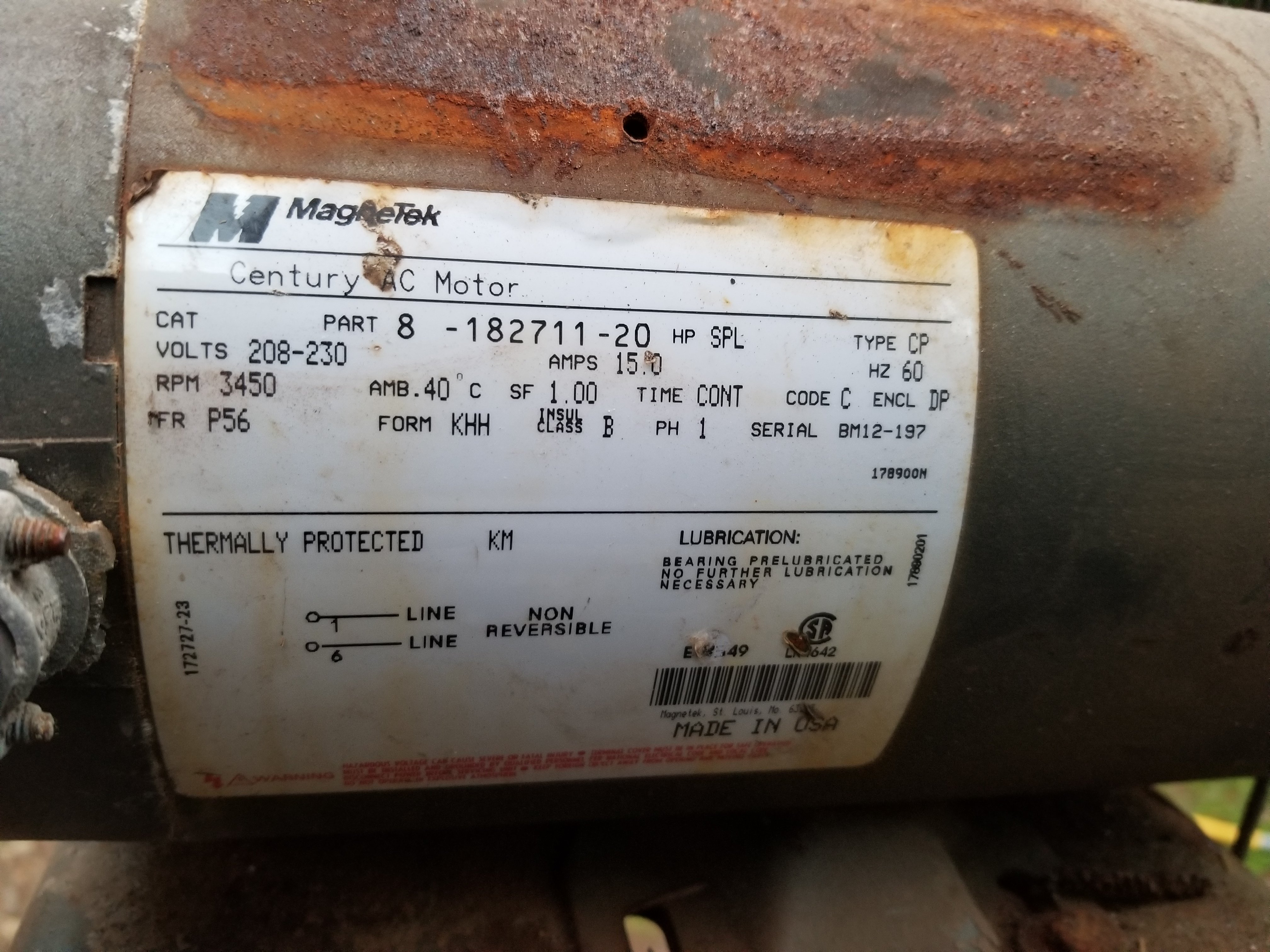 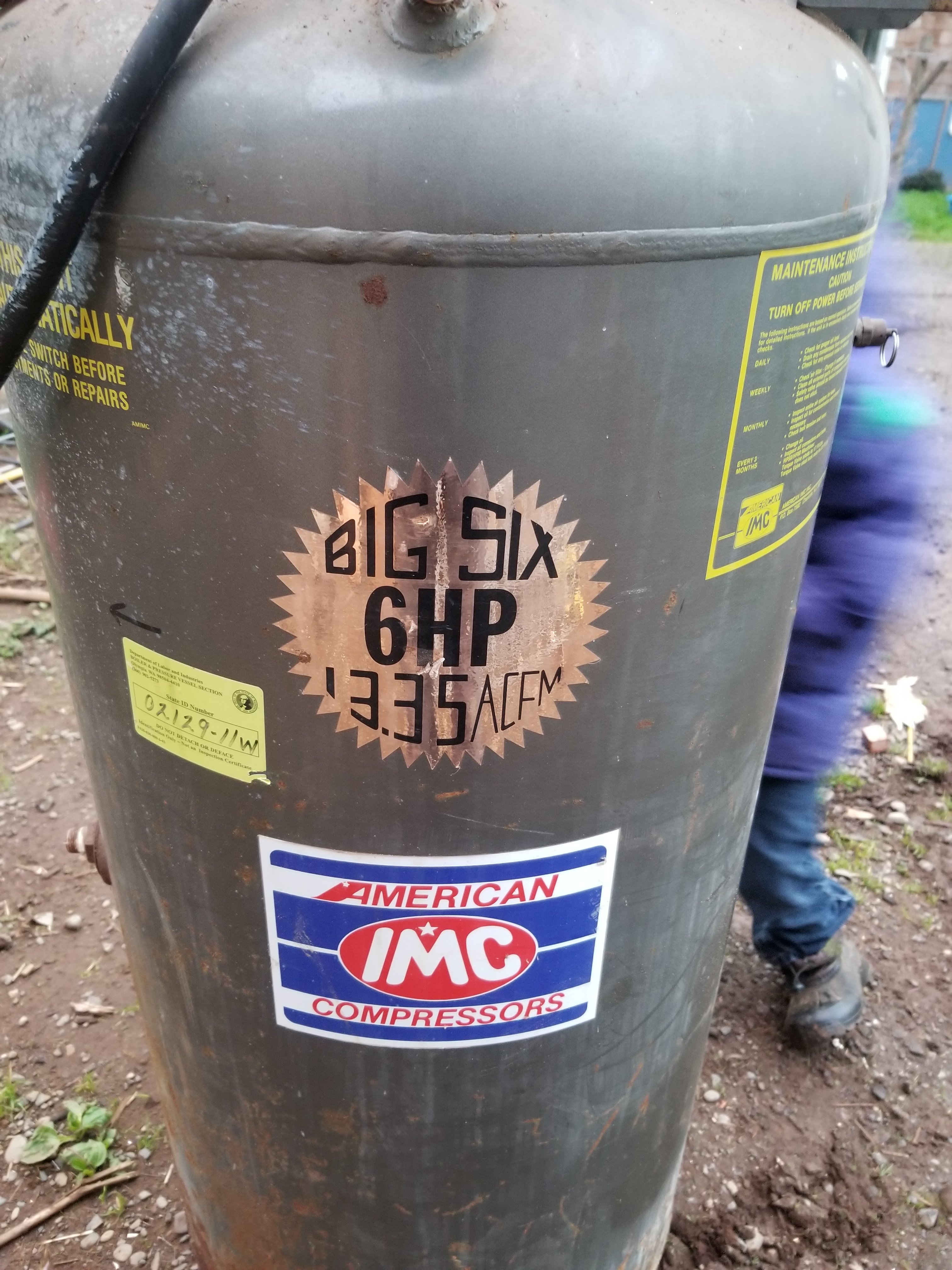 The missing bits are start and run caps.

start by taking the belt off and turning both the motor and the compressor by hand. Makesure they both turn smoothly. If the motor turns smoothly you might be able to spend $50 on capacitors and maybe it’ll work...i would lean toward just buying a new motor from harbor freight or something. If the compressor turns freely you should be able to hear/feel as it compresses and exhausts.

if you got a drill big enough to chuck up to the either the existing motor or the shaft on the compressor you could maybe run it that way just to test the compressor. I would be reluctant to do much with it until i knew the compressor was working,
M

That white thats broken off...that component is a pressure switch. It’s going to be on a hard fitting to the tank...when the pressure is high enough it turn the 7nit off, low enough it turns it on. The broken bit is for a hose but no idea what it would be for...you should be able to remove and cap it.

Cool, will try that. How do I know what size capacitors to buy? Are they both start capacitors?

Motor spins free and easy, compressor hooked up to my drill created some air in tank, gauge won't move so not sure about that. Will a bad compressor put a little air and then stop?

A compressor is basically just an engine without a spark plug. It's got a piston and rings and valves and just pumps the air into the tank rather than burning it like a gas engine.
If it's pumping some air it's probably fine.

That motor is a Century 182711
Current cross reference is Century B385
You'll likely need to call a motor shop to get the capacitor values if you want to use that motor.

The broken little white hose is an unloader, it helps the compressor start when there is air in the tank, otherwise it's fighting against the air pressure trying to start up which is a real strain on the motor.
A lot of times the compressor head has a built in unloader and you don't need that one (aftermarket pressure switch most likely). You'll know once you've got it running. If it starts up easily when the tank is empty and really struggles or stalls when the tanks is pressurized then it will need to be plumbed in. Won't hurt anything to run without it for testing, just shut it down if you hear it struggling too much or you could blow the breaker/fry stuff.

Thanks!! I don't know how I missed that it's century made ...

Are there any rules for using a bigger motor on a certain pump?

You can go smaller as well but you'll need to slow the pump down to avoid over stressing the motor. You'll lose some CFM.

You could probably get away with this:
https://www.harborfreight.com/3-hp-compressor-duty-motor-68302.html

I've had really good luck with HF motors. I run 4 or 5 of them in really tough applications without any failures.

DTT BOTM WINNER
FWIW, I wouldn't go less than actual 5hp and really do 10hp if you have the scratch. If you're running on a 230 20amp circuit anyway, you might as well go with the bigger motor.

irk miller said:
FWIW, I wouldn't go less than actual 5hp and really do 10hp if you have the scratch. If you're running on a 230 20amp circuit anyway, you might as well go with the bigger motor.
Click to expand...

Won't do any good to go oversize without speeding up the pump which is probably not a good idea on an unknown compressor head.

Thanks for the info guys, really great! Heres the sticker on my other motor....it works good. 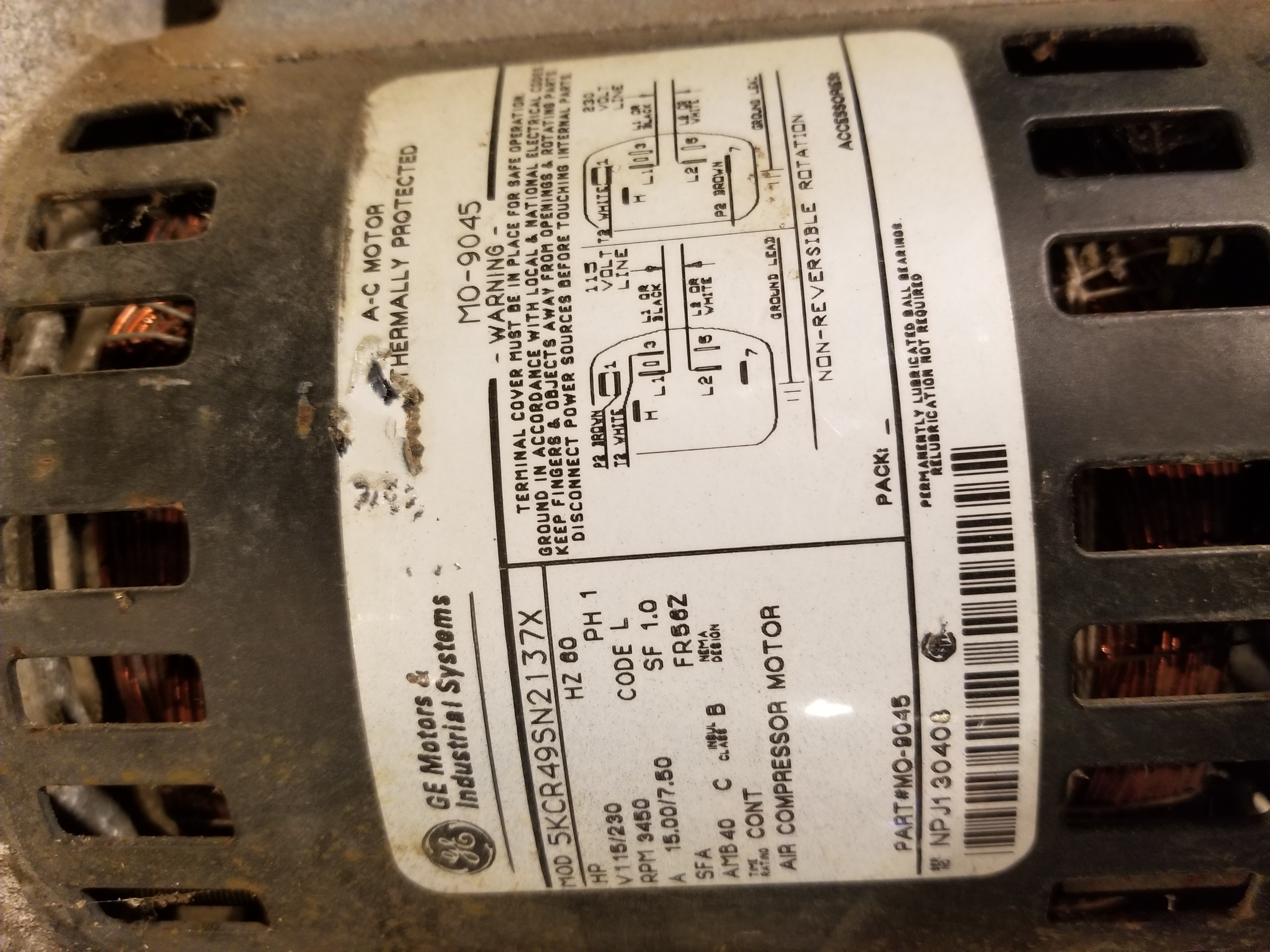 buy the caps and see what happens you might get lucky! Worth the 27 bucks on that gamble for sure.