High time I start a bolt on thread. Got tons of parts in and remembered to take photos intermittently.

The way the fuel lines were ran before. Notice the stopper on where the petcock should go and the lines from the carbs coming from the bottom tank leveling vents. 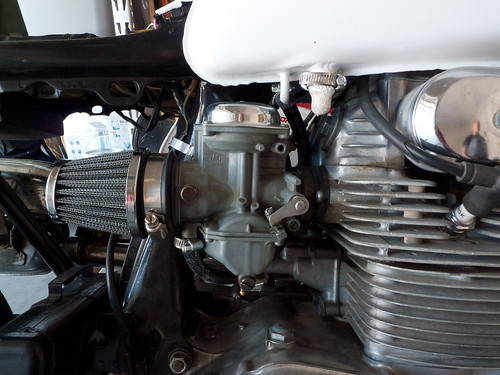 New petcock. It fits a little snug but seems to be fine. Haven't had a chance to do a run test yet.: 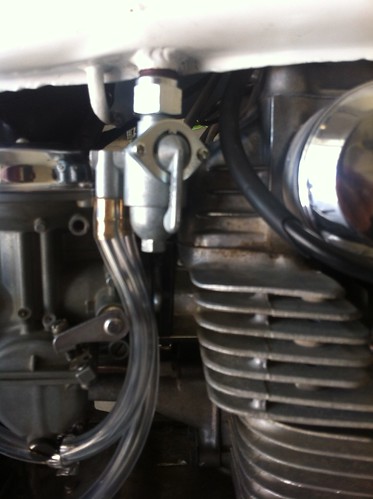 The nightmare that was the wiring found inside the headlamp bucket 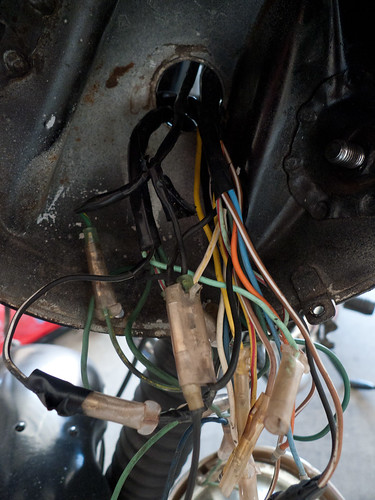 The biggest pain in the ass during the changes was the neutral light. It was only working intermittently. So to fix that, and replace the cluch cable I had to take off the exhaust, as it sits right in front of the rear crank case housing. No way to wiggle the housing around it (I tried for 30 min). After I finally got it off and got the clutch cable replaced I found the neutral ind. switch. It's a little tab that sits under the indicator that completes the circuit when in Neutral. It was way out of position so I tweaked and prodded and poked and tested until I got it working reliably. Believe it or not that took over an hour. It's a very small area where it only completes the circuit in nuetral. A few times I thought I had it and it turned out that N light stayed on through all gears. 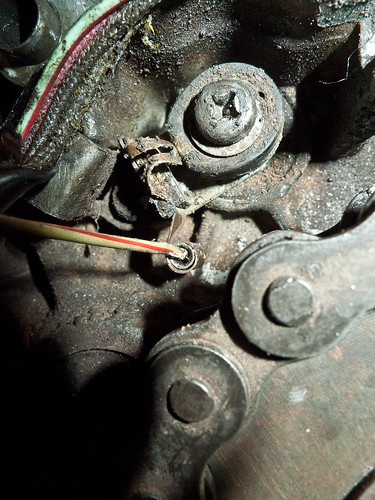 And a random in progress shot. (while the exhaust was off) Most people say pay no attention to their messy garages. You can pay attention to mine if you want. I'm not self-concious about it. 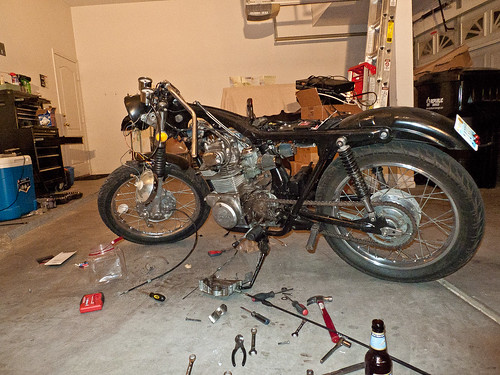 So stoked for this. Love that you're calling it a "Bolt-on build" instead of a build thread. Can't wait to see what you do with this. Not sure what's up with the petcock, but I snapped a picture of mine if you want something to reference by. The face of mine shows outward, instead of the right. If you got it fixed no big, but thought it might have to have another to look at.

Finished up the weekend projects. Got the bars installed, gauges wired and installed, fixed problems that I found and created. 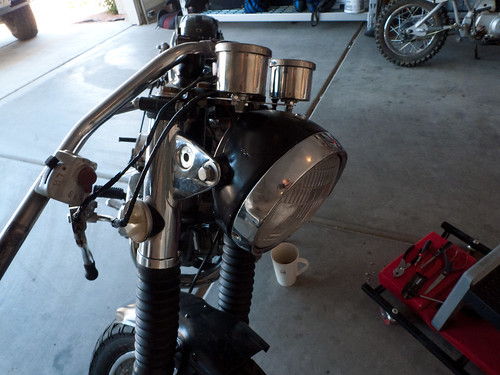 Gauges wired and lit up like xmas. Had to take wires from all over to wire the highbeam and neutral ind. I don't have turn signals so I didn't bother with that, and as far as I know this old bike doesn't have a oil pressure sensor for that light. Am I wrong? 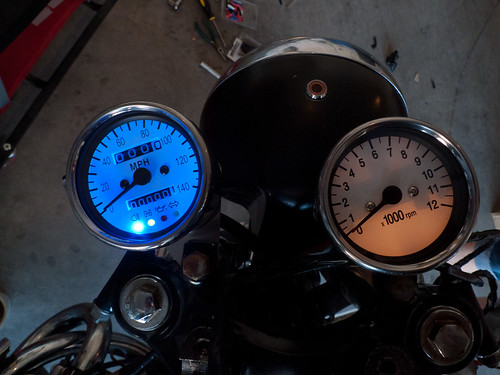 reconnecting wires after taking off old bars. I know it's a big faux pas to cut and splice wires, but as I intend to redo all the wiring over the winter and did not have a clue what was going on in the rats nest of the headlamp bucket, this was my best (temporary) solution. 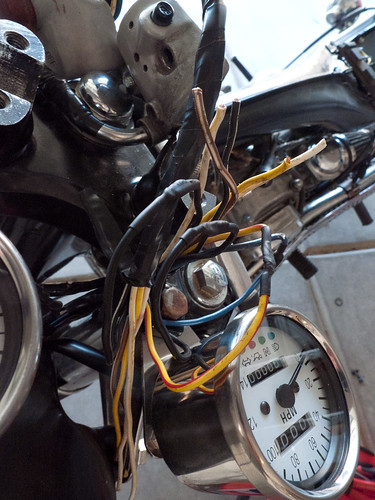 The highbeam was giving me problems. Took off the switch and realized the solder connection for the high beams had broken. Of course I had no idea where my soldering iron was, so I gave up on looking and made a quick radio shack run. 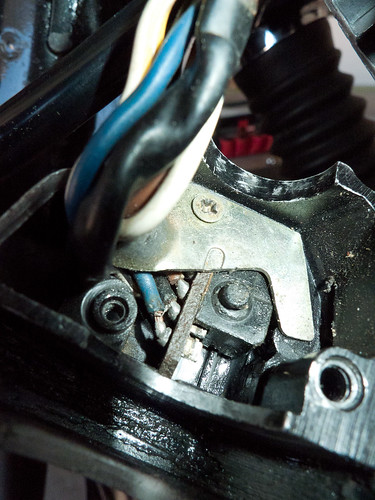 After pulling out the wires from the bar I wanted to route them on the outside. But the electric housing didn't have enough room, so me and the Dremel and a file notched it out. 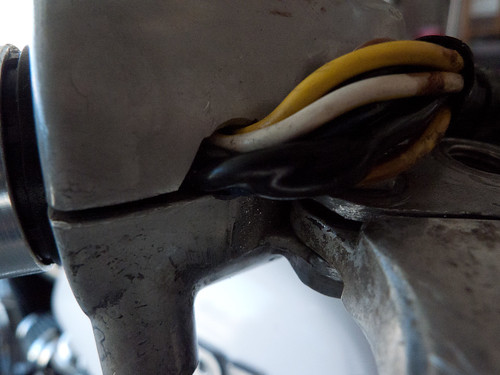 Fuel lines ran. I need to go get smaller clamps. The big clamps seem to occlude flow instead of allowing it. 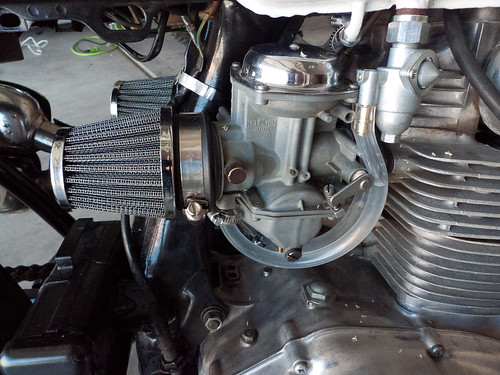 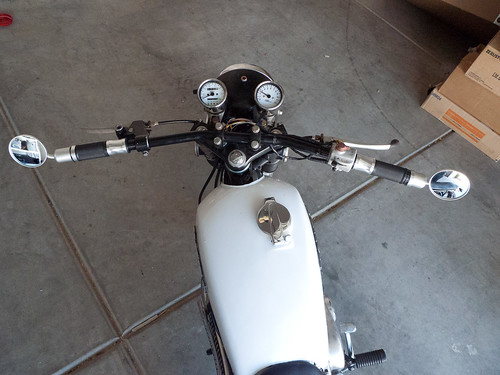 I'm still waiting on my seat to come in so I can start on getting the pan made and mounting it up. After that I'll start polishing when I can to clean up some of the rust. I intend to ride while it's nice out so I don't want it in pieces for the whole summer.

Took it for a test drive not too long after last update. She was throwing fuel all over the place from the leveling vents and the petcock. I removed the large hose clamps and just ran with the lines plugged in and the leak seemed to stop. I'm going to get some of the thin clamps this week and see if that helps the problem.

When she warmed up a bit the machine was creeping while stopped in 1st. I think I need to lube up the clutch hosing (if that's its proper name) because it's not doing it all the time? Is that right or wrong?

Also I'm hoping whatever fixes the creep will fix the "no neutral" problem that I have read so many of these old bikes have. Neutral is a breeze when the engine is off, but hitting it while I'm running, fuggeddaboutit!

All in all we went about 35 miles, easy short ride (had to get back home to the kids). Got her up to 80 with no issues but didn't go past it. She seems capable of the ton, but she isn't tuned to precision, and I still hadn't cleaned up all the work I did from earlier.

The drag bars were comfortable and all the cables, electronics and speedometer worked just fine (had to remove the tach as it broke when I was screwing in the tach cable. Sent an email to DCC about it and we're in talks about it now.

My throttle is sticking now though. I replaced the tube and cable like I had read how to do but now the pull is a bit tighter and it doesn't go forward (closed) on it's own. It seems to operate like a push/pull throttle now (it did not before). I'm thinking I might need to reassemble the throttle and get a new tube.

Sounds like you've got a few gremlins to chase down. That's good thought. Get it running well before you go and chop the thing in half. Maybe you already know, but take it slow. I jumped in head first on my CL and while that's not a bad thing per say, I wish I would have waited to get it running first.

Anyways. I've got the same problem of creeping while in first on my XJ. If you figure out a fix, please post it up.

Not sure what to tell you on the throttle. Put some butter in there?

P.S. Those gauges look GREAT! Love the set up you got going.

I use pretty small zip ties on all my fuel lines. Looks clean and seals as tight as anything else. Something to think about if ya can't find small enough clamps

FlyinRyan350 said:
I use pretty small zip ties on all my fuel lines. Looks clean and seals as tight as anything else. Something to think about if ya can't find small enough clamps
Click to expand...

Do they still work if you take the fuel line off?

Thanks for the offer on the tach, but I'm waiting to see if I can fix it. After emailing Dime City they say the broken tach "doesn't appear to be a defect" and that I should be able to fix it. I can't post pics from here at work, but I'll post some soon showing what broke on it. I've heard nothing but good about DCC and I'm hoping they will stand by the products they sell.

rock2d2 said:
Thanks for the offer on the tach, but I'm waiting to see if I can fix it. After emailing Dime City they say the broken tach "doesn't appear to be a defect" and that I should be able to fix it. I can't post pics from here at work, but I'll post some soon showing what broke on it. I've heard nothing but good about DCC and I'm hoping they will stand by the products they sell.
Click to expand...

Yeah, the DCC guys are pretty cool. They've helped me figure out a few things around my bike. Stick with em. They'll treat you right.

Fox said:
Do they still work if you take the fuel line off?
Click to expand...

I like the thought of clamps better. Able to take off and put back on while on the side of the road (if need be).

Sadly, nothing new to report. Waiting on my damned seat to come in from fleabay, then I can mount it and my new tail light, and then figure out what to do with the rear fender and the plate mount.

I may have mentioned before how I have the mechanical ability of a Goldfish with ADD. Well after getting ahead of myself I tried to take apart and fix the Tachometer that was broken.

Let's say that did NOT end well (also, for the hell of it, lets say I was wearing a tuxedo while I was doing it). But Herm over at DCC saved the day. He said that they would replace it. I told him after what I had done to the thing I couldn't take a full return without feeling guilty. Those DCC guys are pretty awesome and they are working to make things right.

What are you doing with the seat that came off of it? It looks pretty sweet, all flowing and such... Do you have better pictures of it?

Yeah, same sentiment for the metal clamps. If I'm ever out on the road and I don't have zipties with me I want to be able to take my gas tank off and such.

I didnt have any plans for the sold seat. It's 1/16th an inch of foam over molded fiberglass that's held on by Velcro at the rear fender. It's barely a seat. I'm replacing it with a bump stop seat pretty soon. My new one came in the mail yesterday so now I gotta get the cushion cut and upholstered.


I'll try to get better pics of the old seat when I get back home Sunday.

Seat pan came in. Here's some shitty iphone pics of it dry fitted. Still haven't decided what to do with the rear fender. If I decide to ditch it should I put some bar between the frame where the fender was? 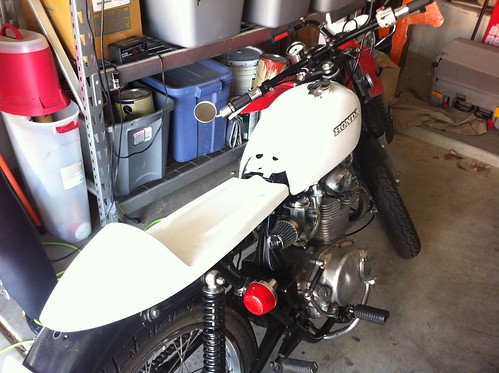 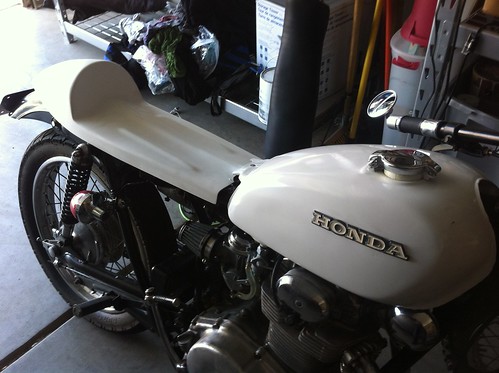 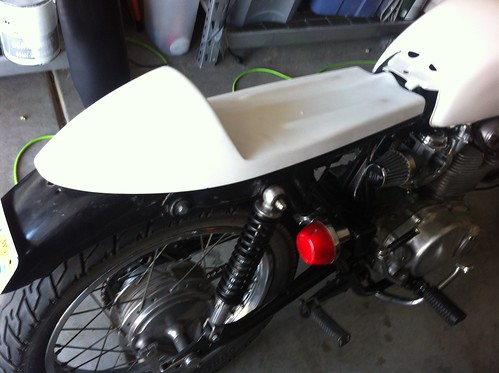 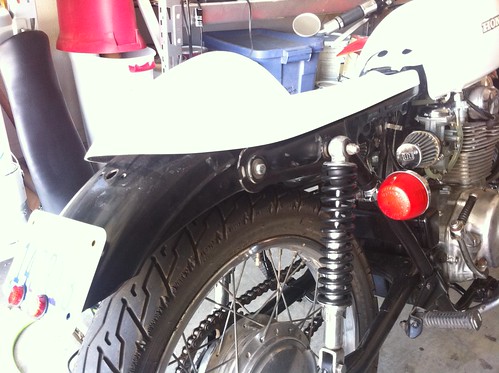 Had the scrambler out scrambling today. She purred like a kitten

rock2d2 said:
Had the scrambler out scrambling today. She purred like a kitten

hahahah she looks great mate well done that looks like a mad road to ride.

Yeah man! That road sure does look fun! (other than how straight it is!)