I think I annoyed the purists at HT with my build... maybe you guys will appreciate the frankenbuild 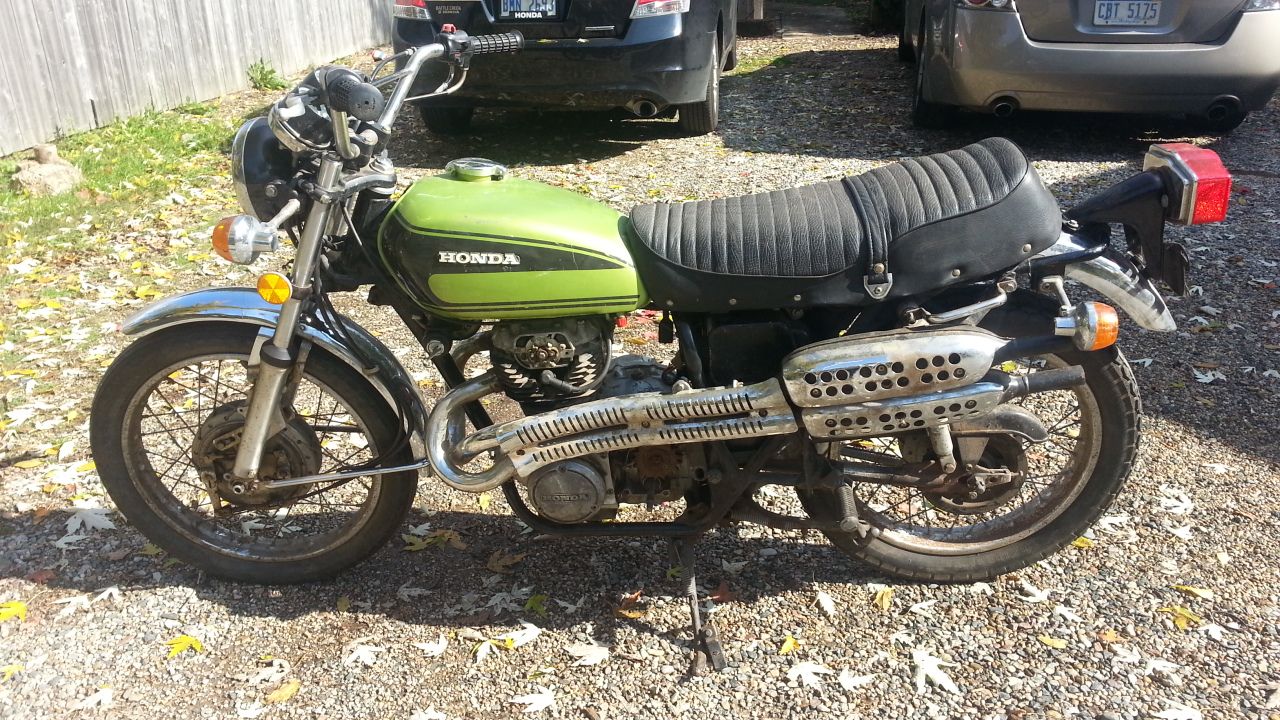 He and I stripped it down and blasted the frame & swingarm 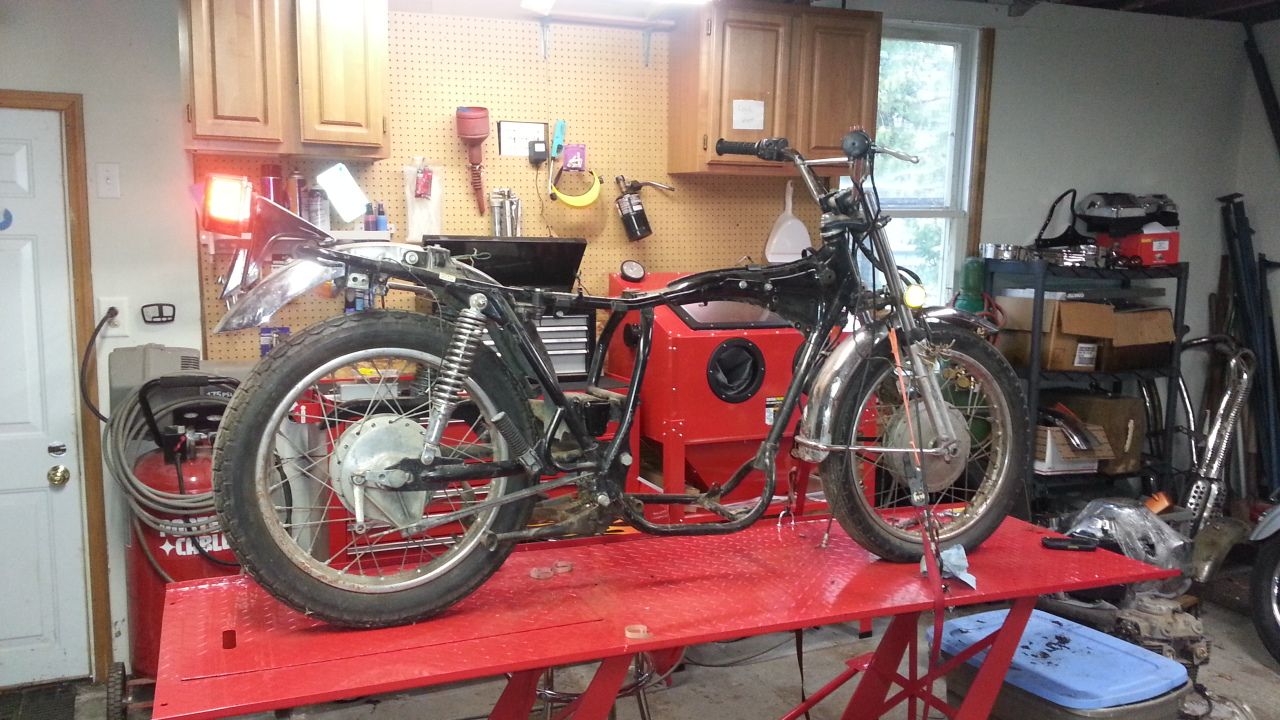 He likes the fat tire look, so I picked up an FLH wagon wheel we both liked. Plan is to run MT90-16 front and rear. Also sourced an old FLH front end with fatboy lowers that had been rebuilt. The bars and lights were on it when we got it so we left them on for mockup purposes. Not sure what will be on the final project, but it gives us some ideas for now.

Frame will be cut/modded soon. Going to pick up some more tubing today at lunch. Also picked up another pair of wagon wheels, this time with tires on them so I'll be selling all the other wheels. Once I get the right bearings pressed in I'll get new pictures and update the post.

These bikes are kind of the influences, though we're not copying either of them to any real extent:

this guy even used the same wheels we picked

Science is true whether you believe in it or not.

I was all set to hate it, because what you started with looked pretty good.

I hope you don't make it into a hardtail, though. I'm not a fan of hardtails. I like the look, but hate to ride them.

Good work so far, I'm In. Father son projects are the best.

Just got back from picking up the tubing for the neck insert. My machinist (whoever that ends up being) is going to hate me. I wanted 1.75" OD DOM tubing with .25 wall thickness. They only had either .120 wall or .450 wall.... so it looks like whoever chucks this thing in the lathe is going to have some carving to do.

The plan is to turn the OD to around 1.60 (I'll verify this once I cut the built-in bearing cups off), and turn the ID to about .003 less than the OD of the new bearing cups I ordered. Should be around 1.310. I'll drill some holes in the neck, press in this DOM tubing, then fill-weld the holes to secure it. After that it's just a matter of pressing in the bearing cups.

As of now I'm undecided on the tail. Hardtail looks cool, but it's not so easy on these bikes as the bottom rails are at different heights due to the way the motor mounts in there. I have some ideas on how I could correct this, but really I don't think a swingarm rear would look so bad either, if done right. I just need to figure out what shocks to use as they won't be mounting in the stock location. I'll move the top mounts a lot closer to the seat area. I know very little about spring rates, so I'll have to do some research to that end as well. Here's the bike I saw in sprung-tail format that made me reconsider my stance on going hardtail...

Why are you putting a sleeve in the neck?
The bearing races in the neck pop right out no need for cutting.
Or am I missing something?

SONIC. said:
Why are you putting a sleeve in the neck?
The bearing races in the neck pop right out no need for cutting.
Or am I missing something?
Click to expand...

the races pop out but the cups don't. I'm using a Harley wide front end. Nobody had bearings for this conversion. Once I cut the bearing cups off, the neck should be right about where I need it, which is 5.625" long. Then once the bearing cups, bearings, dust cover, etc are all in place the HD neck should bolt right up nicely.

If you haven't yet... Search out Troybilts 360 build here. It's been a cafe, a "brat", a traditional chop, and now a full custom boardtrack inspired build. All one bike haha. Anyhow, a lot of what you're talking about has been done in it's many transformations.

VonYinzer said:
If you haven't yet... Search out Troybilts 360 build here. It's been a cafe, a "brat", a traditional chop, and now a full custom boardtrack inspired build. All one bike haha. Anyhow, a lot of what you're talking about has been done in it's many transformations.
Click to expand...

Thanks fro the tip! Looks like something I could kill an evening or two catching up on. One comment he made actually gave me pause... "If I had it to do over, I wouldn't start with the 360"

I've thought about this alot. There's nothing I've bought so far that couldn't be applied to another bike. Really tempted to find an XS650 or something similar that's easier for parts sourcing. There's a decent deal on a frame locally, without papers though. And then I'd have to find a motor... hmm. On the plus side I'd have a giant load of cl360 parts to sell lol

Have had very little time in the last week to work on anything, as I became a grandfather Friday afternoon. Unfortunately there were some complications and she has been in NICU since then. She's doing well, but her lungs need to develop a bit before she can come home. And before you ask, no..it was NOT my 17yo son that had a child. My 22yo daughter is the one with an expanding family.

But before all that happened, I was able to put some time in on this critter to start working out the front end swap. 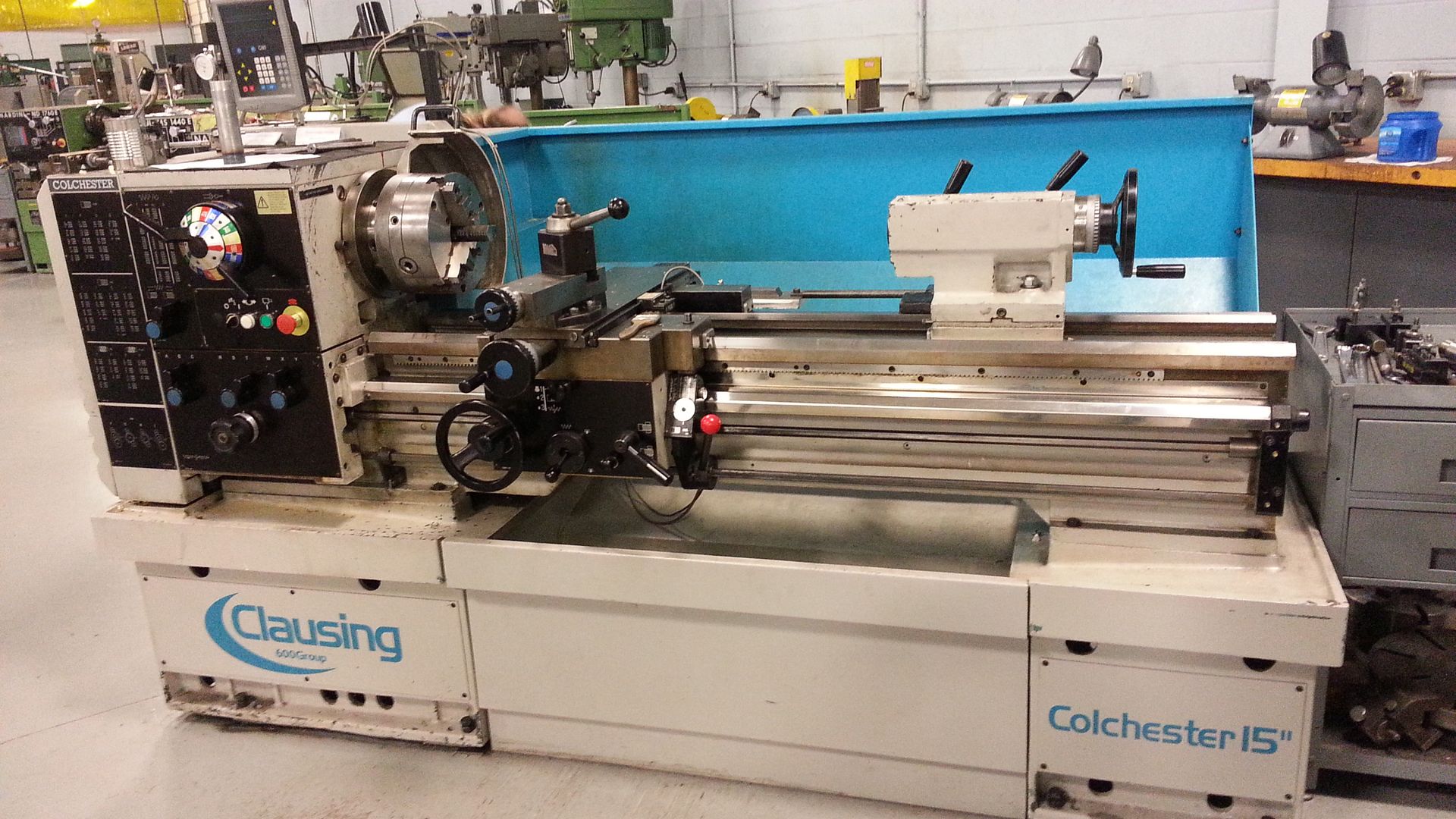 Since nobody makes a HD to Scrambler bearing swap kit, I made my own. This is the neck insert made from DOM tubing turned to the ID of the Honda neck, and bored for an interference fit with the Harley bearing cups. 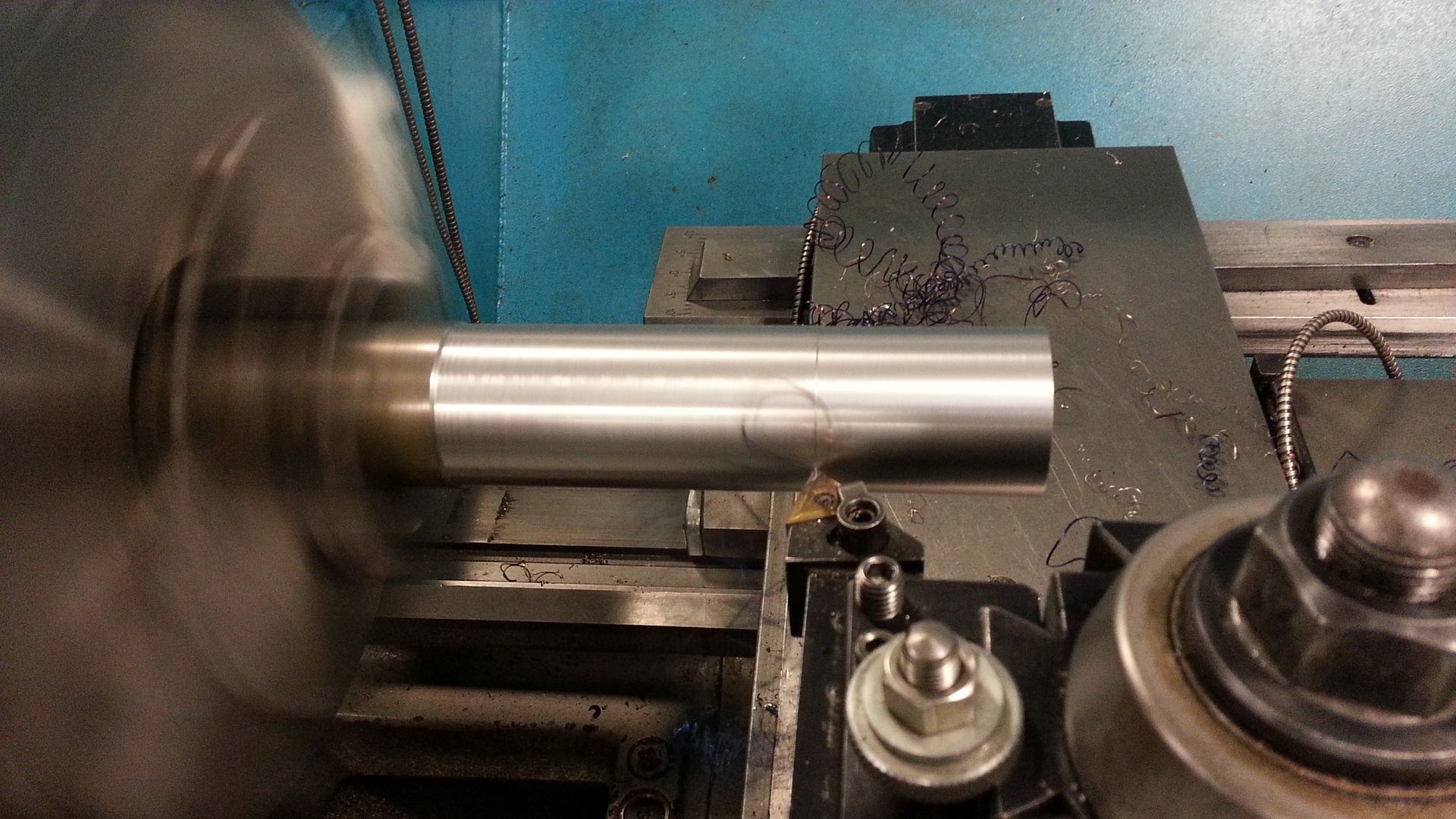 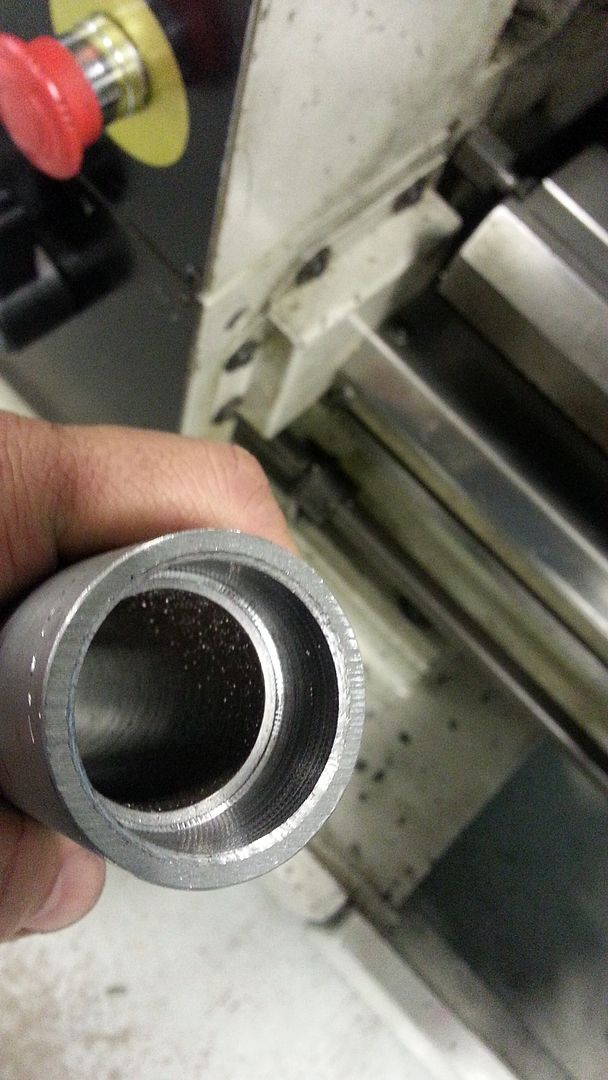 Here's how that project starts. If you measure between the integrated bearing cups on the Honda you'll find they are 5.625" apart. Coincidentally, that's length of a factory Harley neck without cups. So, we carefully lop them off (only one had been cut off when I took the pics)... 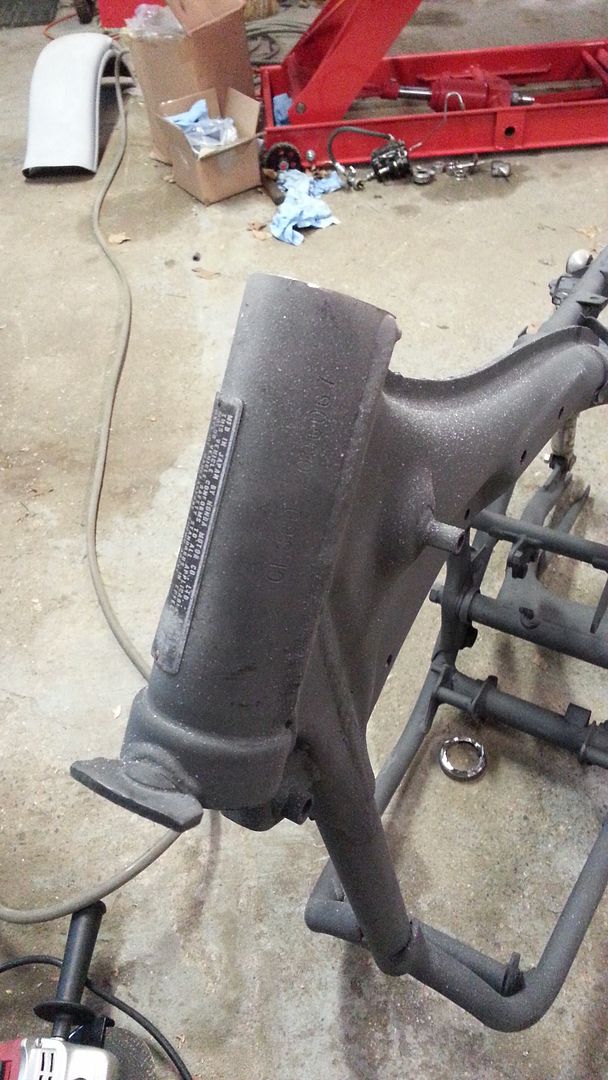 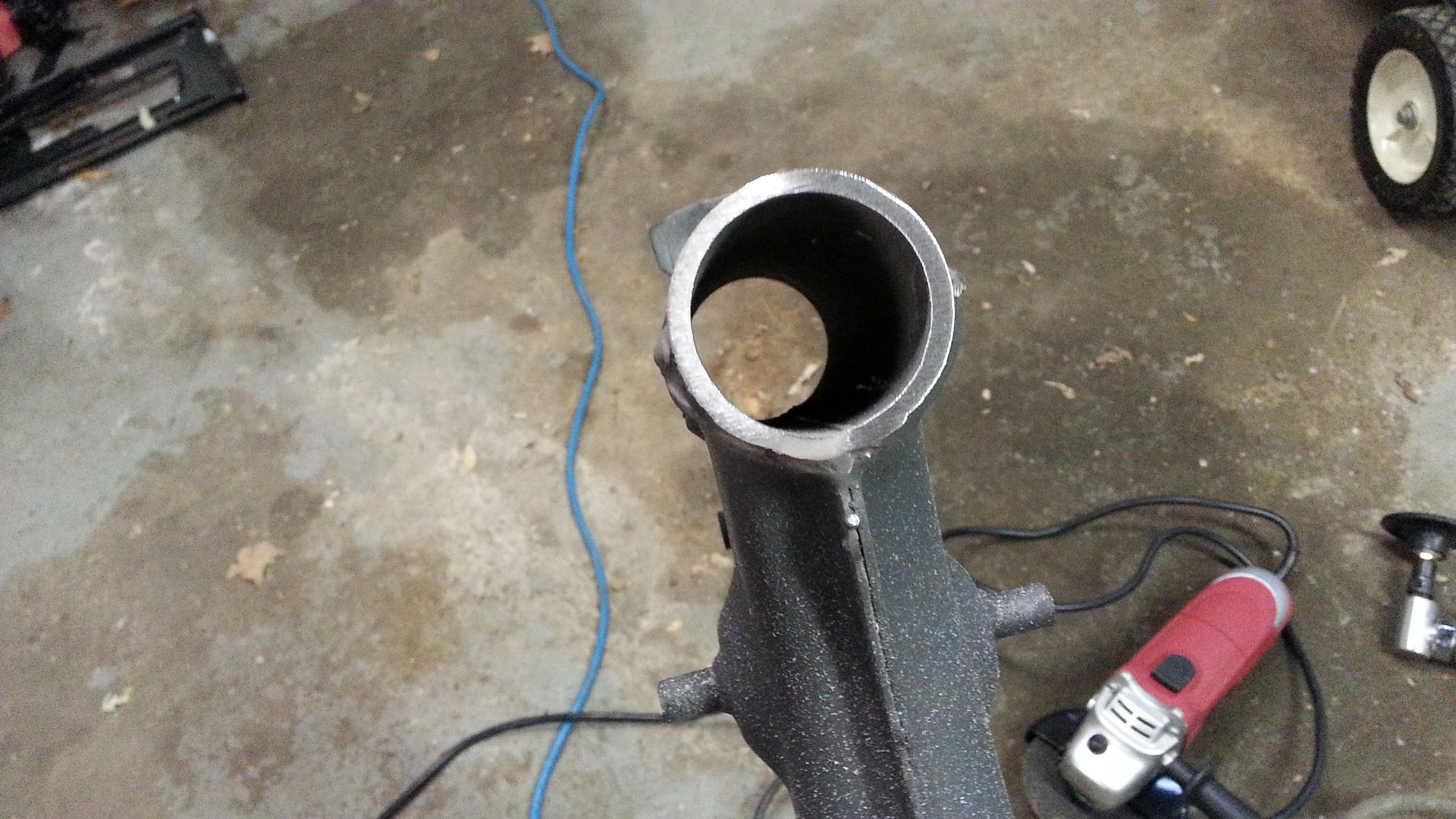 On the next update, I will show you how I installed it (as long as nothing goes wrong when I actually get to it this weekend)

In the meantime, here's a quick and dirty mockup. I'll be lowering the front end 2" and then rechecking the trail calculations. Right now the rear is about 2.5" lower than stock and mocked up with a piece of prepunch angle. Rear loop has been cutoff too.

BTW, I think I've decided to leave it as a swingarm, although I may play with shock mounting points and such. As you can tell, first order of business before I do any of that is to extend that swingarm (unless one of you has one already extended you'd sell me) 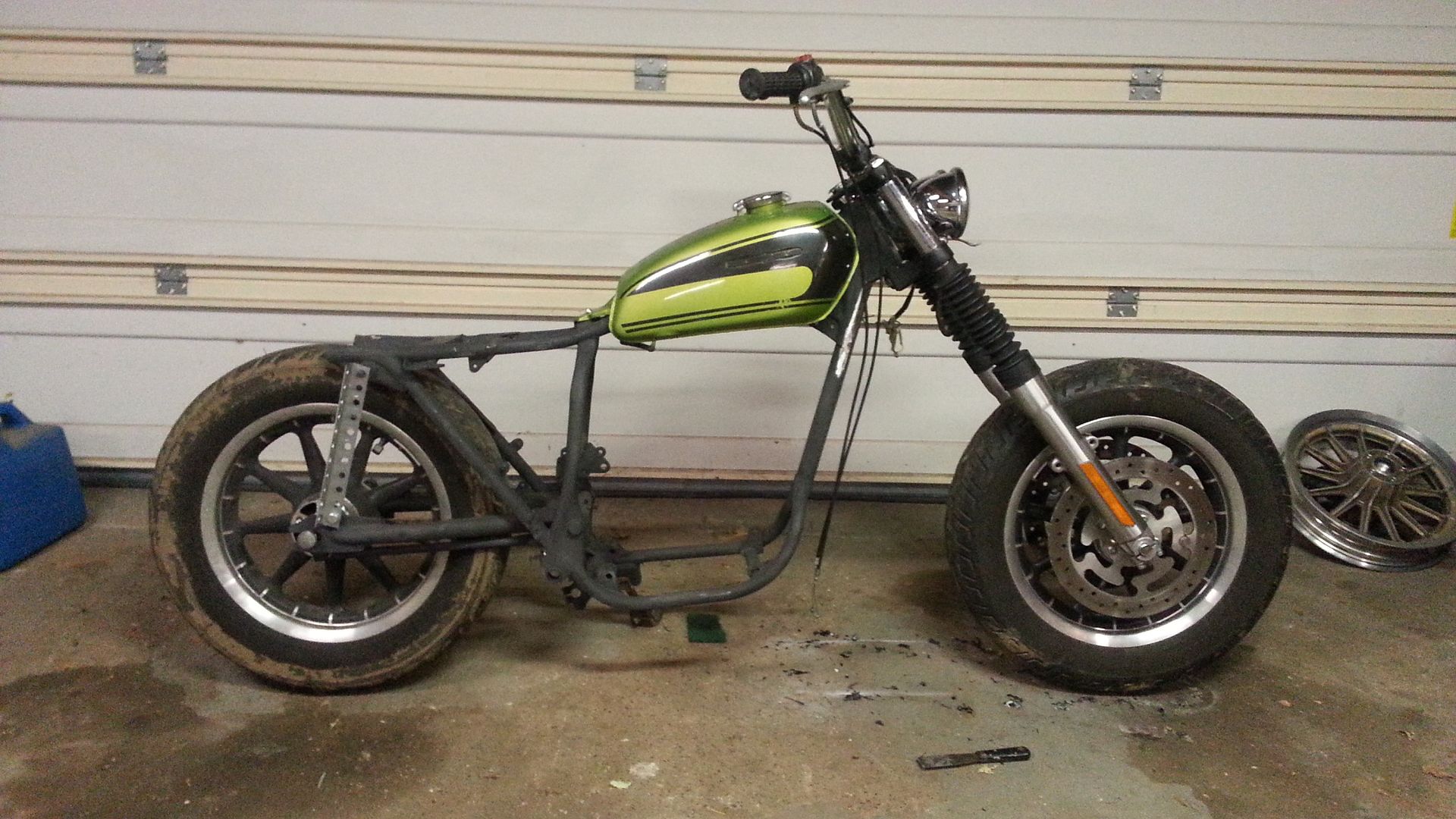 With your fab skills I'd look for an 80s boxed steel swinger from a Ninja250 or a GS500. Should be easy to modify to fit the 360 frame and will add not only length but tons of strength/stability.
S

Very cool build! Nice to be able to pass the passion on to your offspring.

VonYinzer said:
With your fab skills I'd look for an 80s boxed steel swinger from a Ninja250 or a GS500. Should be easy to modify to fit the 360 frame and will add not only length but tons of strength/stability.
Click to expand...

The ninja isn't mono shocked? or is it? I've toyed with that idea as well.

It is. But it's a steel swinger. Remove the stock shock brackets, fab some lower mounts and you're gold. Or go monoshock. Tough to do on a 360 but certainly possible.

Interested in hearing some thoughts on I should gear this thing. I think stock was something like 34/16, but I don't think I can even find a sprocket that small for the harley wheels.

You don't want to mess with the gearing too much on these bikes. Not a ton of get up to begin with. Checknout sprocket specialties. They'll make you whatever you want, and the prices aren't bad.

I'm kinda curious how much the weight will change when it's all said and done. The bigger contact patch of rubber on the road may have an effect. Hell...I have no idea right now 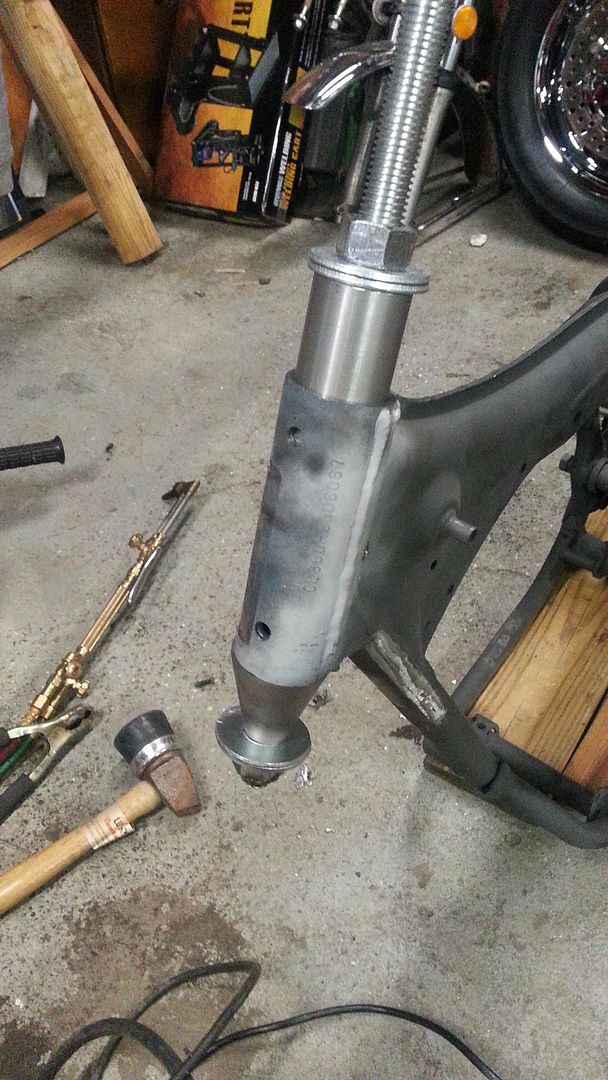 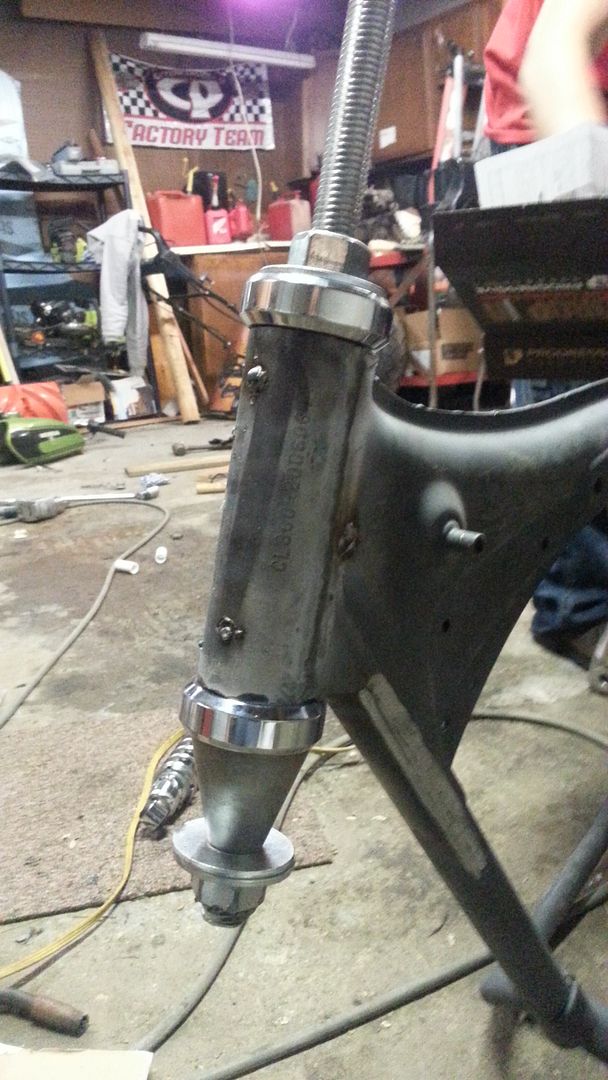 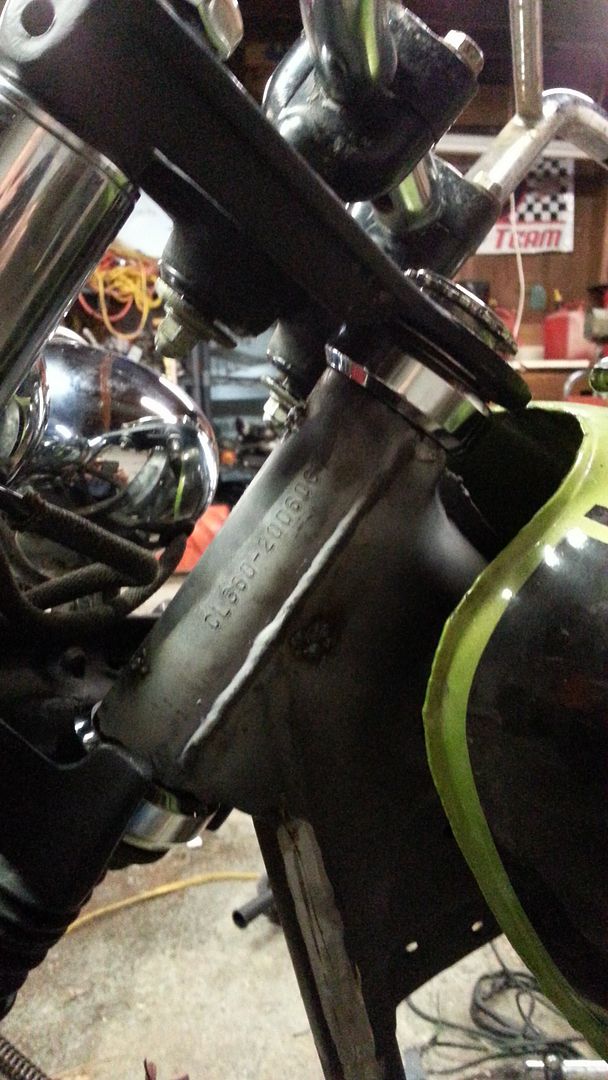 Swapped out the springs in the forks for the progressive suspension setup, lowering them 2". Then set my son on the bike to see how things looked. Also tried out the stock bars and some apes. The apes look ridiculous on there, so they are going on the sale pile. 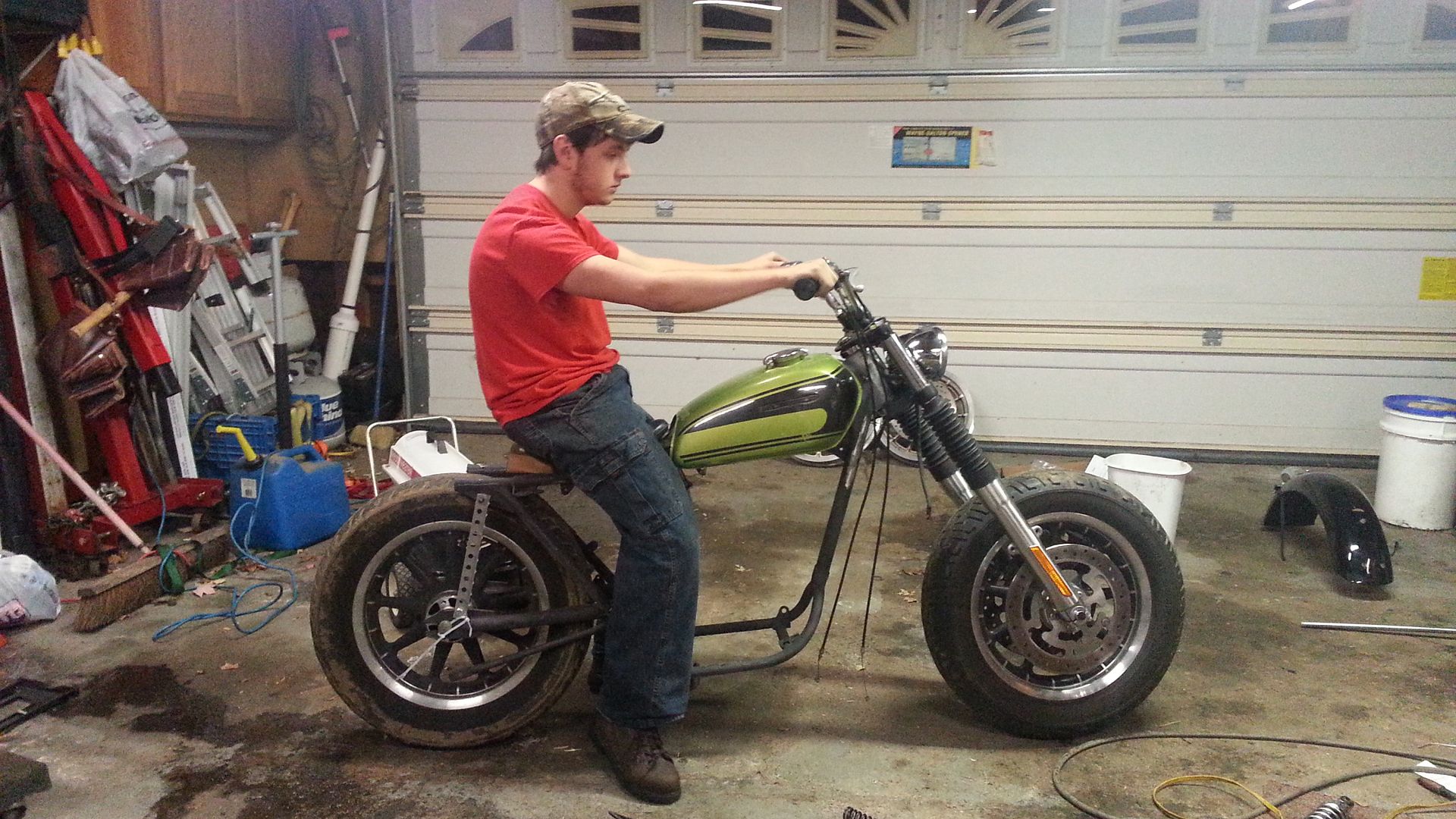 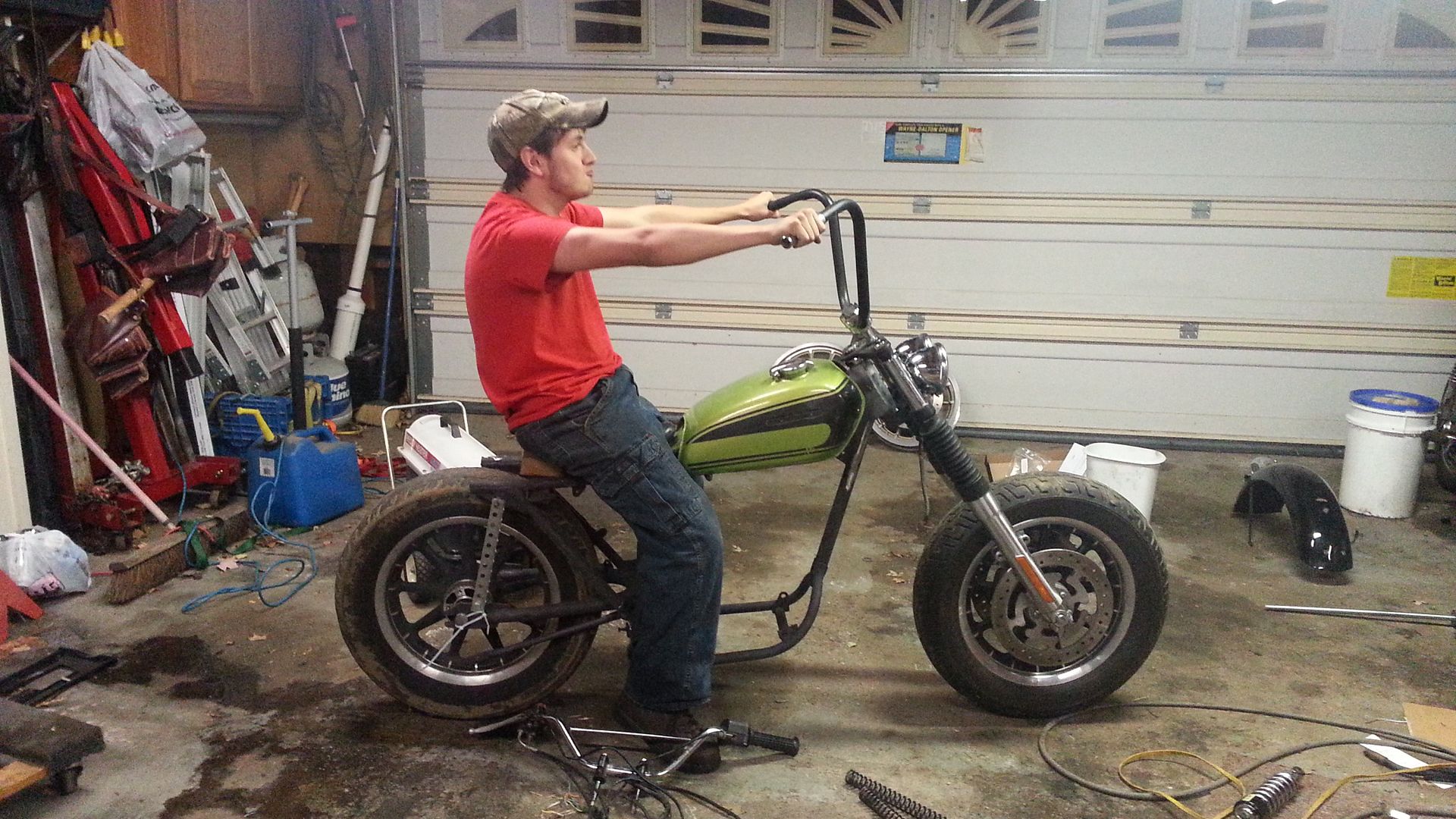 Next on the list of projects will be deciding how or what to do with the swingarm. This thing looks like a mini-bike right now. we gotta get that back tire moved out a bit.