But first I'll tell something about myself: I'm Thom, a industrial design student from The Netherlands. The bike is as old as I am. I've got my motorcycle drivers license (restricted to 35kw for the next two years ) since may and have been dicking about on the Dominator ever since. 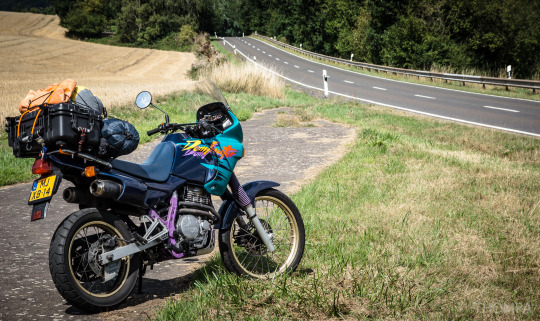 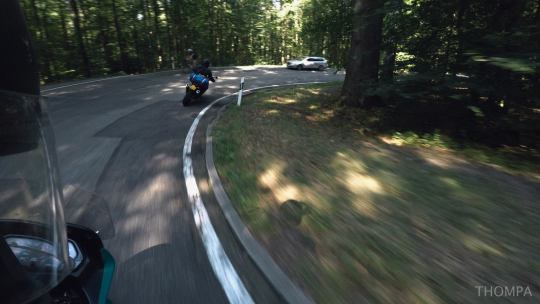 The plan is to build something in between a scrambler and a supermoto. Ie. a scrambler with supermoto like handling. So no 18 inch knobbie tires but 17 inch front and rear with sticky tires, good brakes and more stiff suspension. 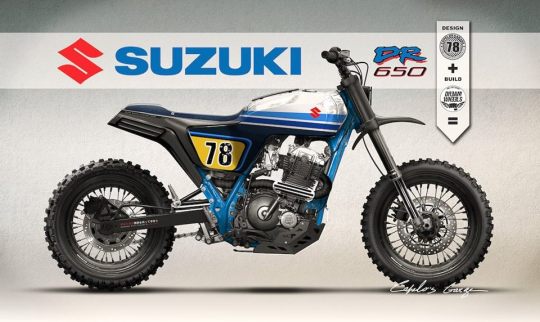 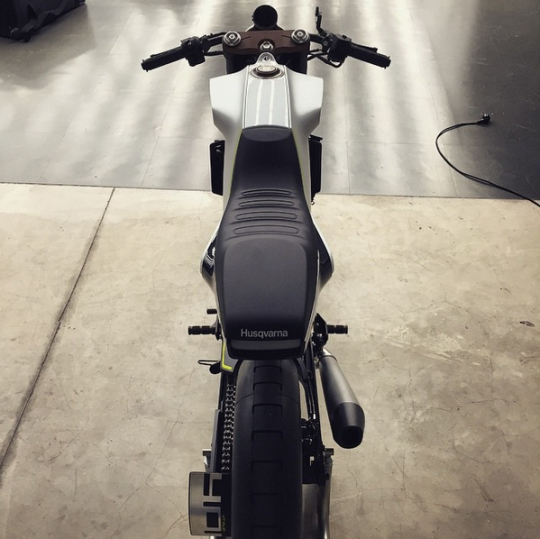 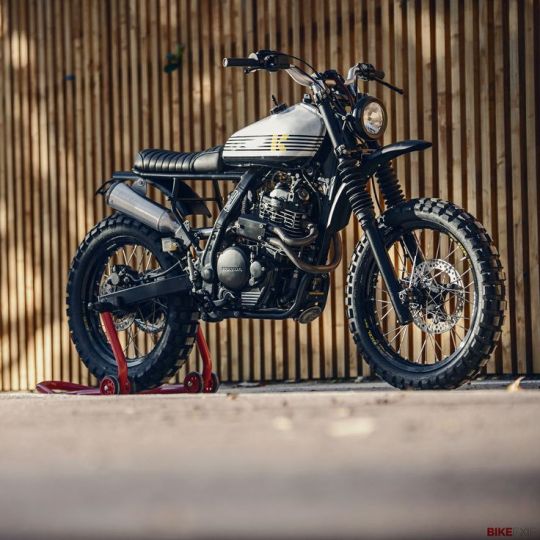 So the first things I'm going to do is make the rear wheel and front fork fit the Domi. The set is from a Honda CRF Supermoto so it has a nice Beringer brake setup (Needs a new master cylinder though), 3.5x17 excel wheel on the front and 4.25x17 on the rear and supermoto setup Showa USD's with Scar triple clamps. 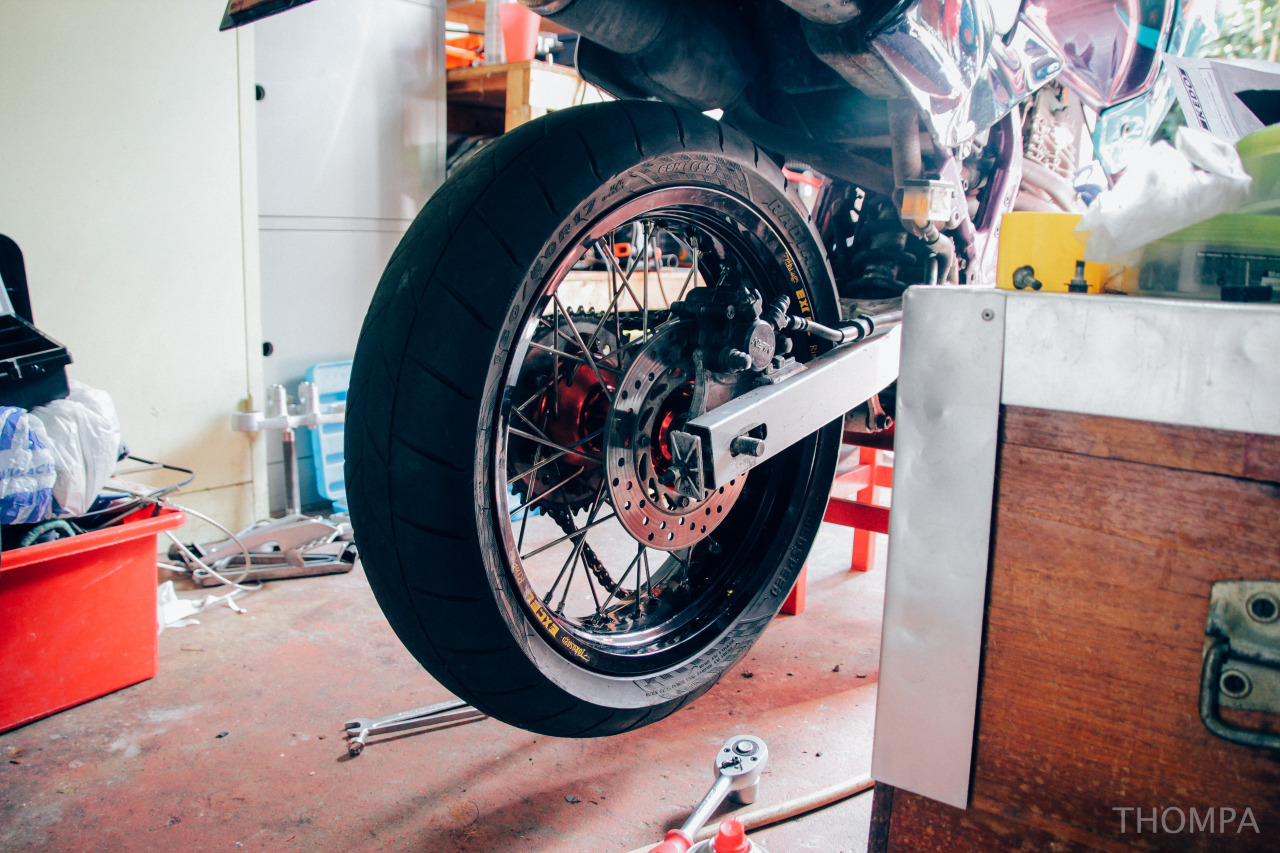 The rear disc brake from the Domi swapped right over as the CRF one is a larger diameter. 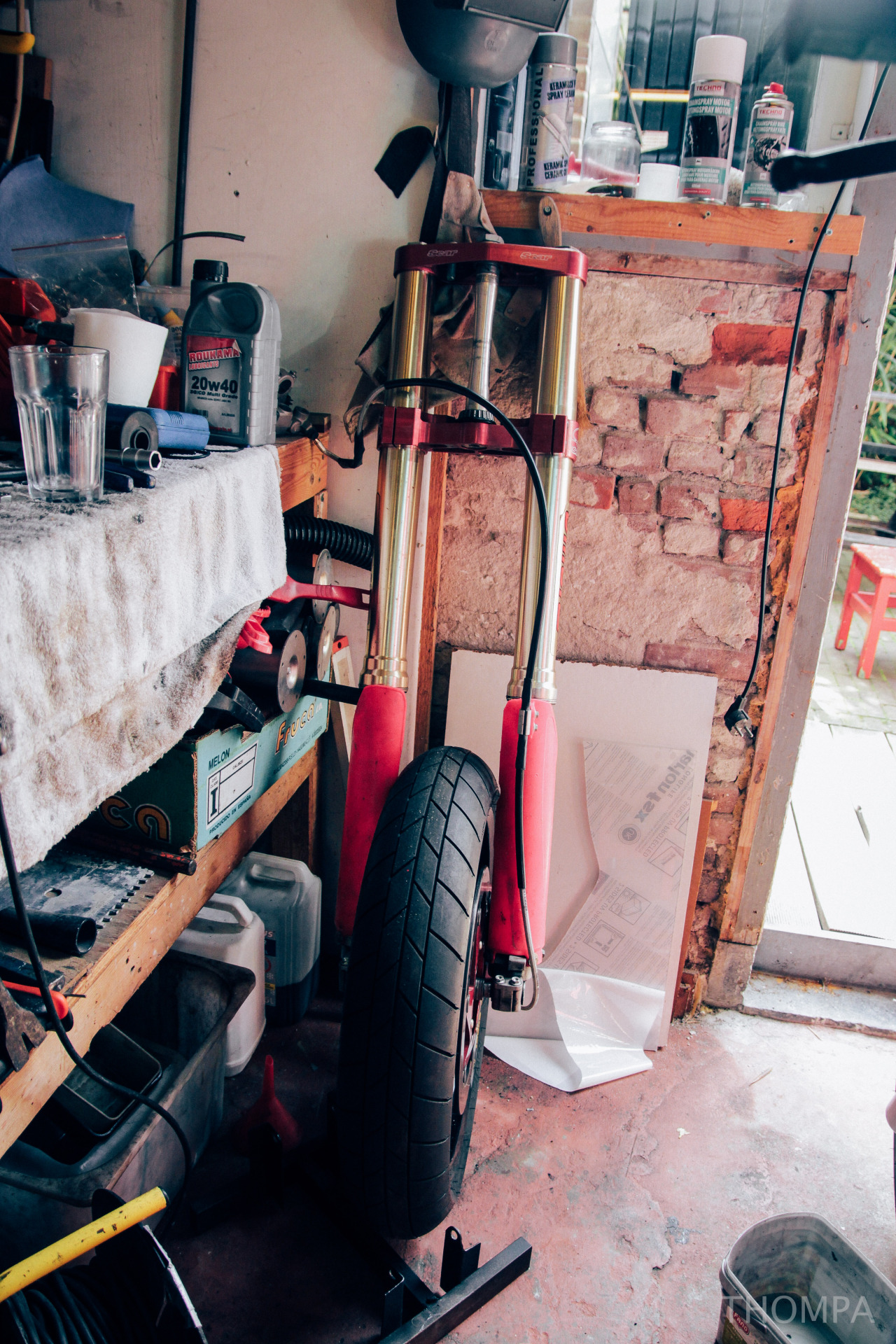 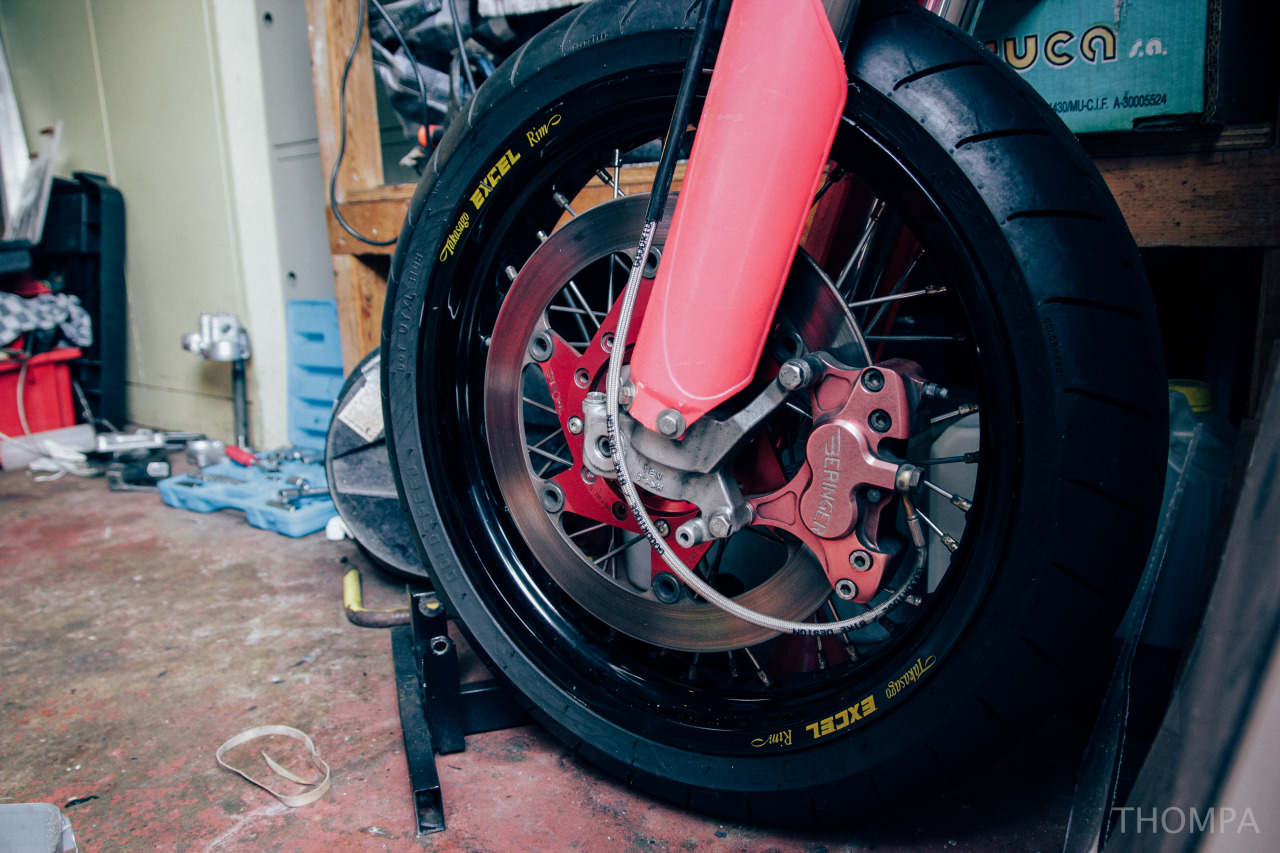 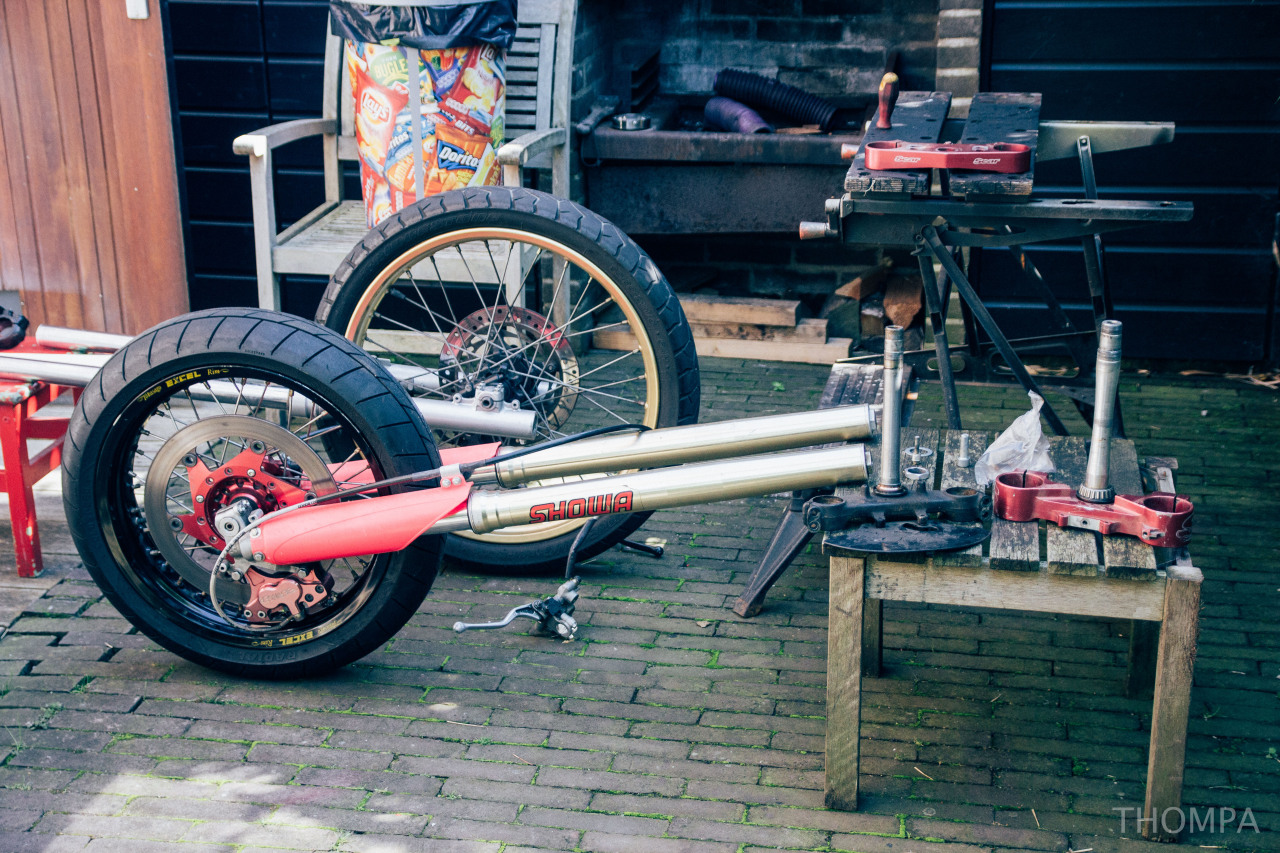 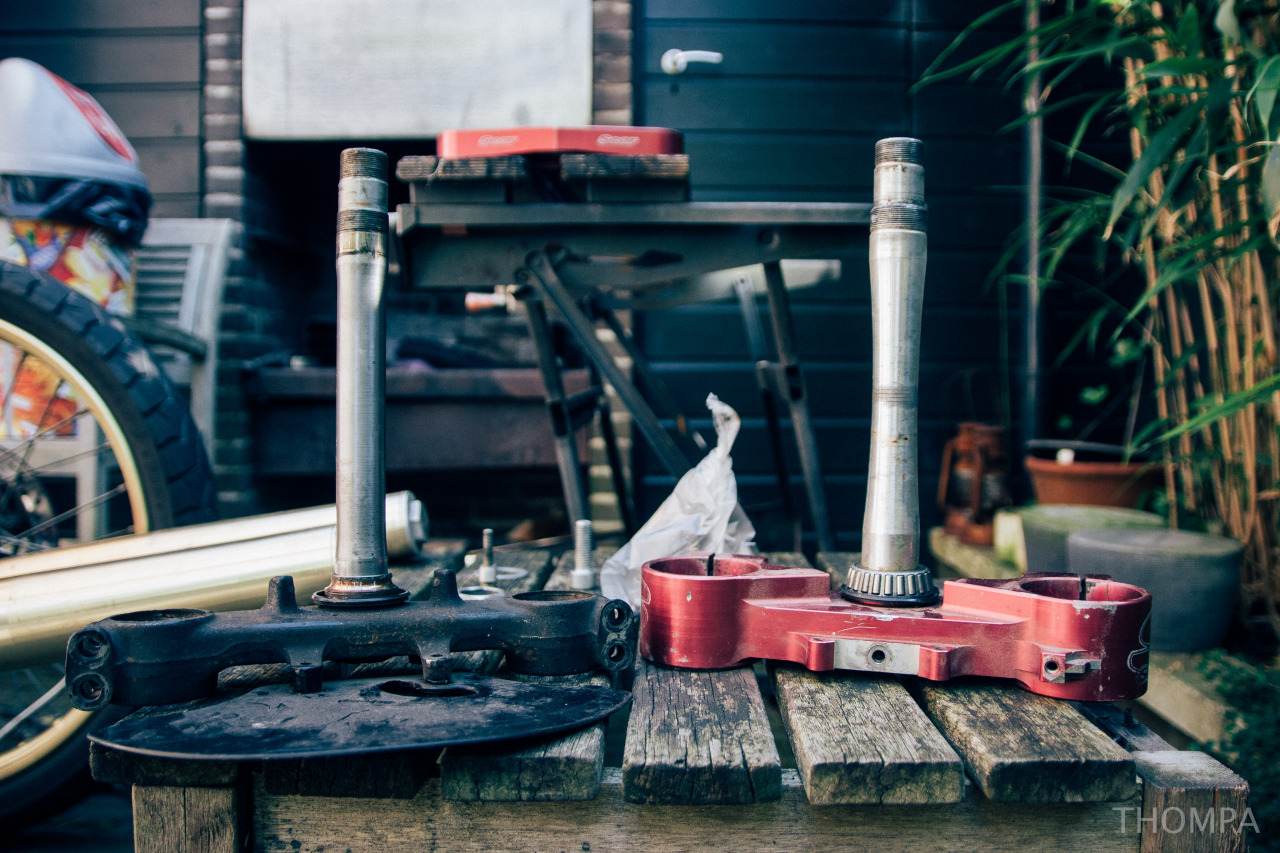 The CRF uses a different bearing and the diameter of the stem is different. So I'm thinking of pressing the CRF's stem out, turning a new stem on the lathe that wil fit the Dominator. Any thoughts? What kind of material should I use for the stem? 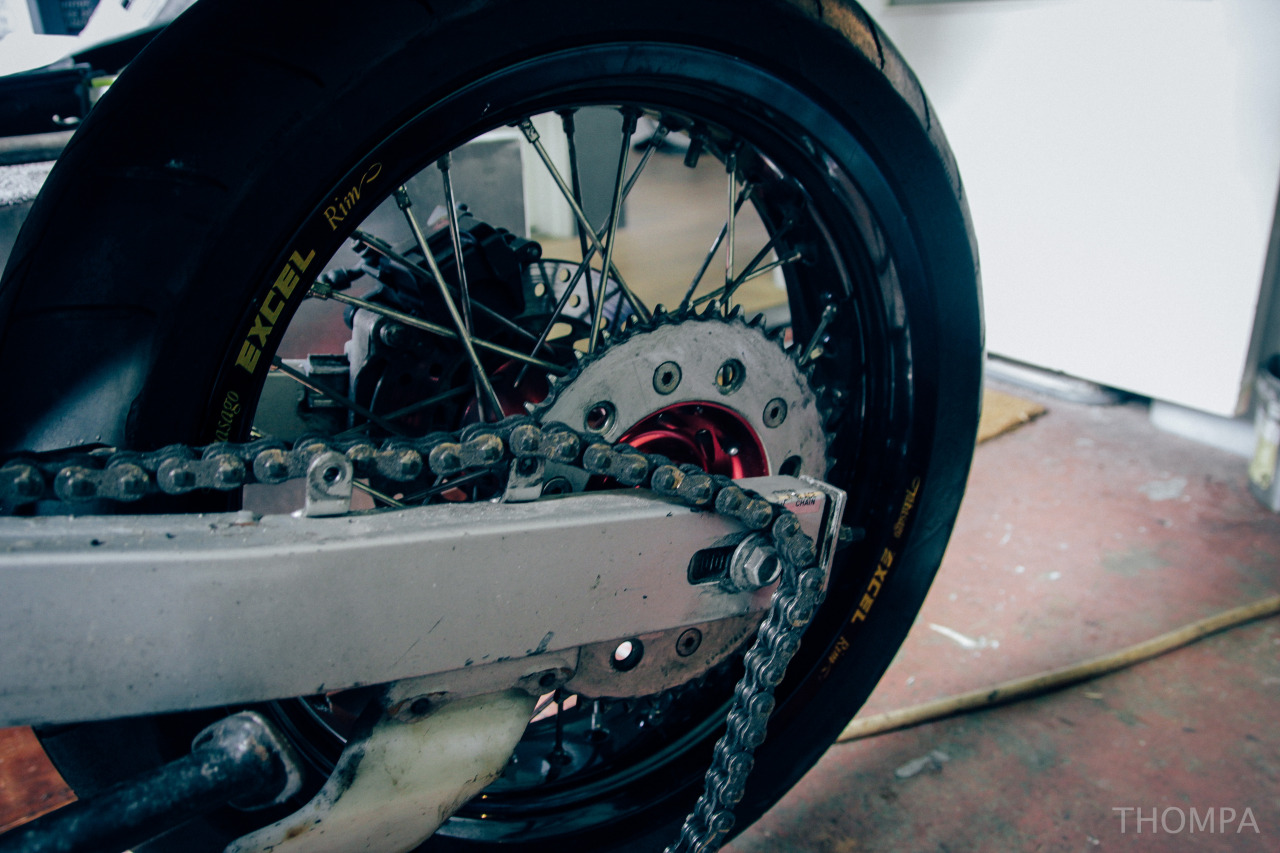 The CRF hubs take a bigger diameter shaft than the Dominator. So I could either 1. Make the Domi swingarm, chain adjustment thingies and caliper holder fit the bigger shaft. 2. Replace the bearings to fit the Domi shaft. 3. make some kind of spacers so the Domi shaft fits the CRF bearings

Obviously number 2 is the best and easiest way but I would really like to keep the original sized bearings so if I get a CRF as a track bike I can swap the wheels out and don't have to spend a fortune on wheels again haha. What do you guys think?

And the stupid fork boots where they belong. God I hate that purple : 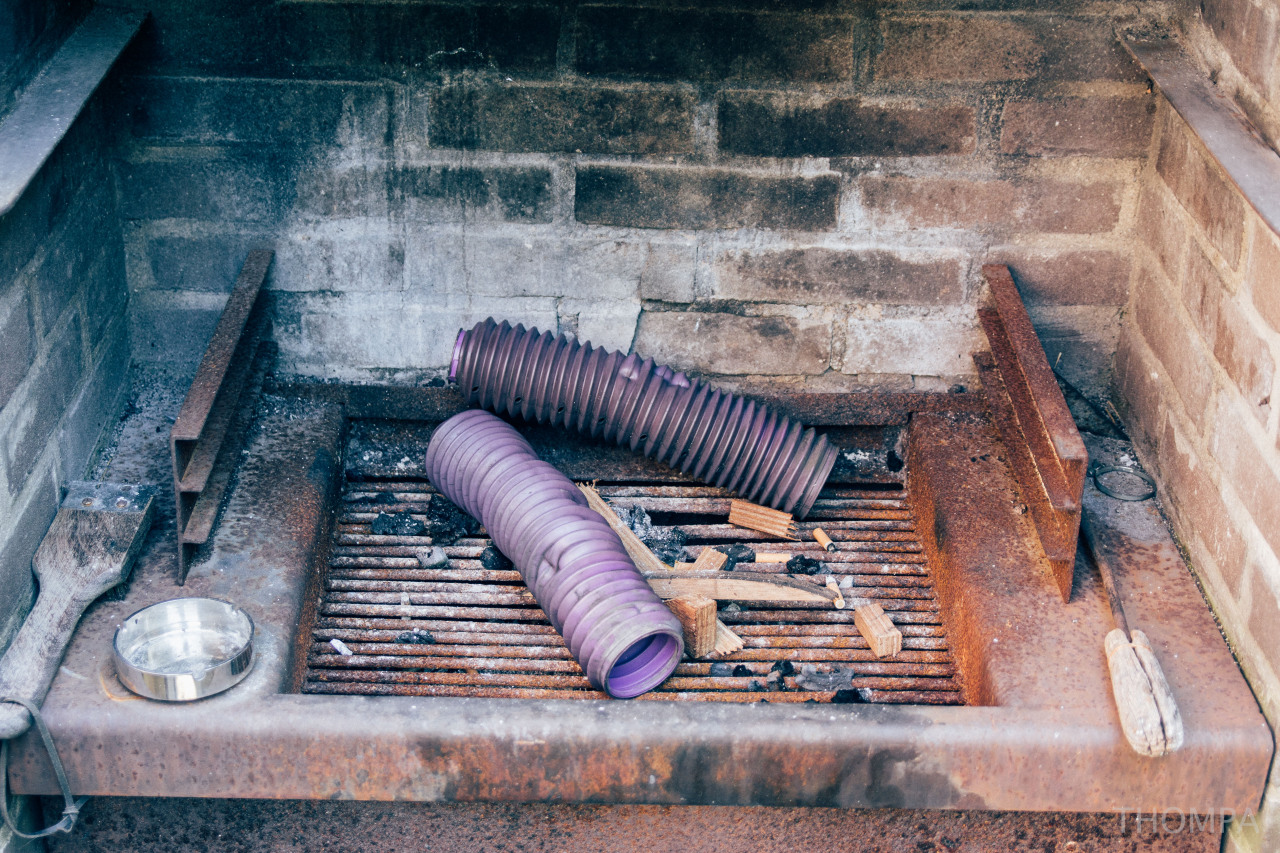 
3. Bearing Swap from All Balls Racing - Dont have link but this is the cheapest route. You will need a spacer from All Balls since the stack height different.
V

I watch with interest, all these Domie threads are great.

yep lusting after a dommie. your inspiration pics are ace.

Pressed out the steering stem. It took around 6 tons of force. 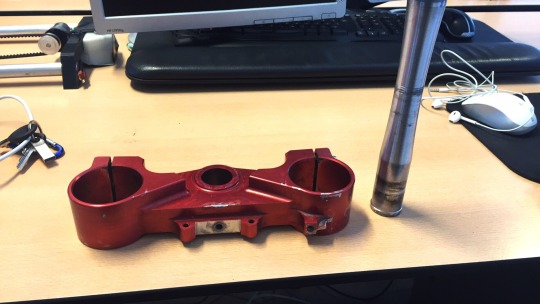 And modelled up a new stem in Solidworks. Just need to find somebody who can make it for me.. 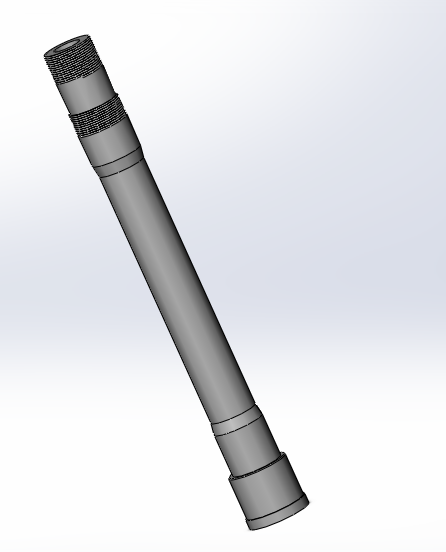 Do you have the steering stem bearings already? Need those, to precisely measure for the bearing fit. Hollow or solid?

So I ordered a pair of 30x47x12 mm tapered roller bearings. I wil just need some spacers.

Also took a look at the rear wheel and it turned out that the PO did some DIYing on fitting the CRF axle to the bearings.... By pressing a tube in the hub to make up for the smaller diameter of the axle.

Took the wheel to a motorcycle shop for them to press it out because a hammer didn't help and I didn't want to damage the aluminium hub. 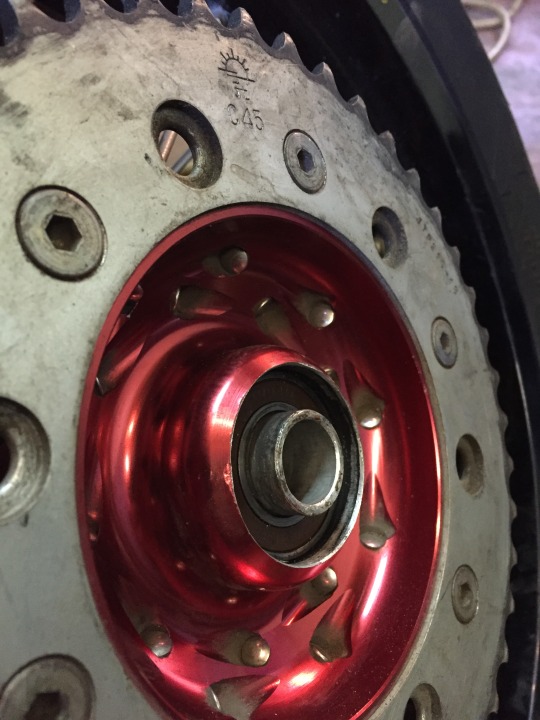 Got the rear wheel bearings out and this is what was inside the hub. Turns out this is a way Talon fits their bearings. 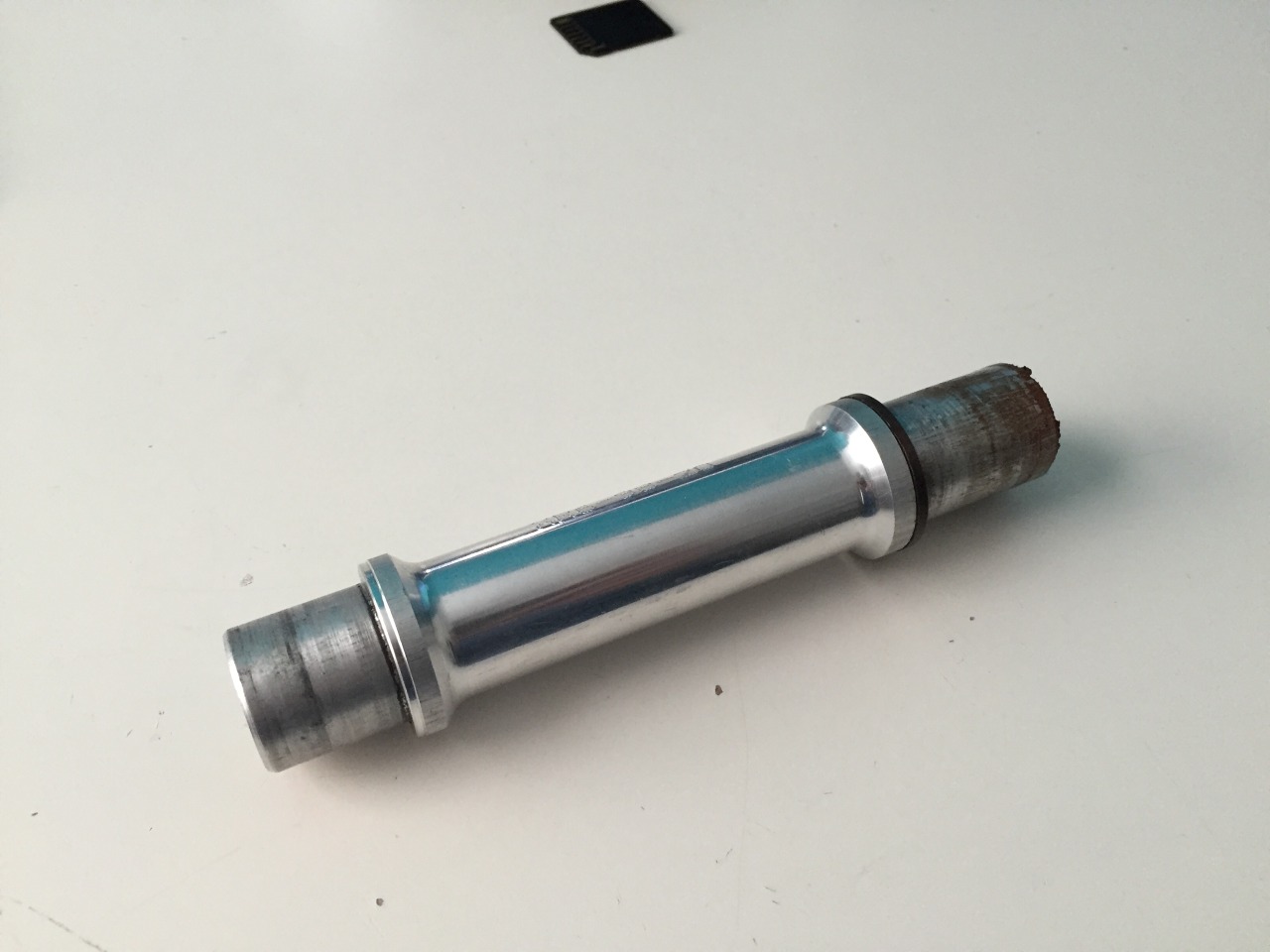 Ordered new bearings for the head stem and rear wheel. The head stem bearings are from Alibaba :-X as they were around €15 instead of €30 per bearing from All Balls. We'll see how they hold up. 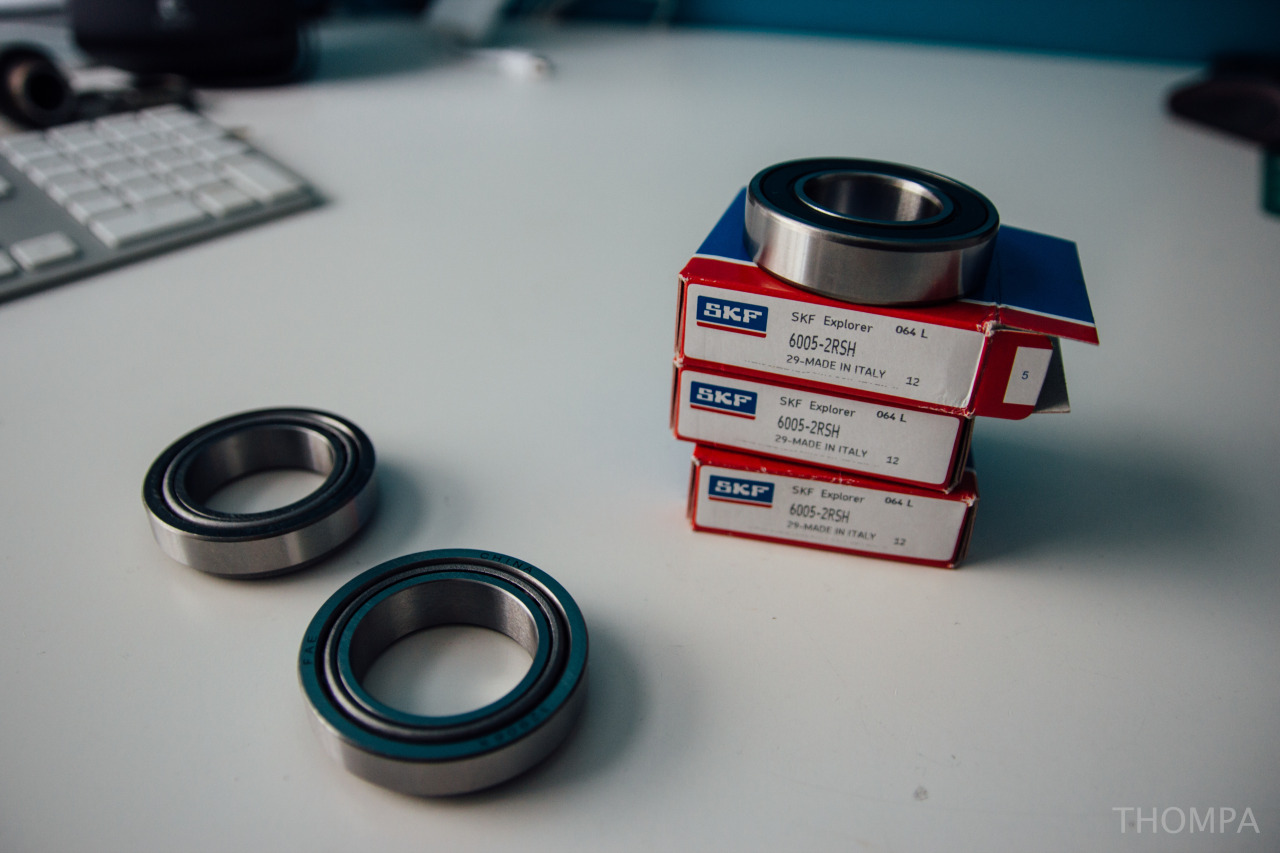 Have to figure out what to do with my forks as the PO mangled up the rebound adjusters it seems: 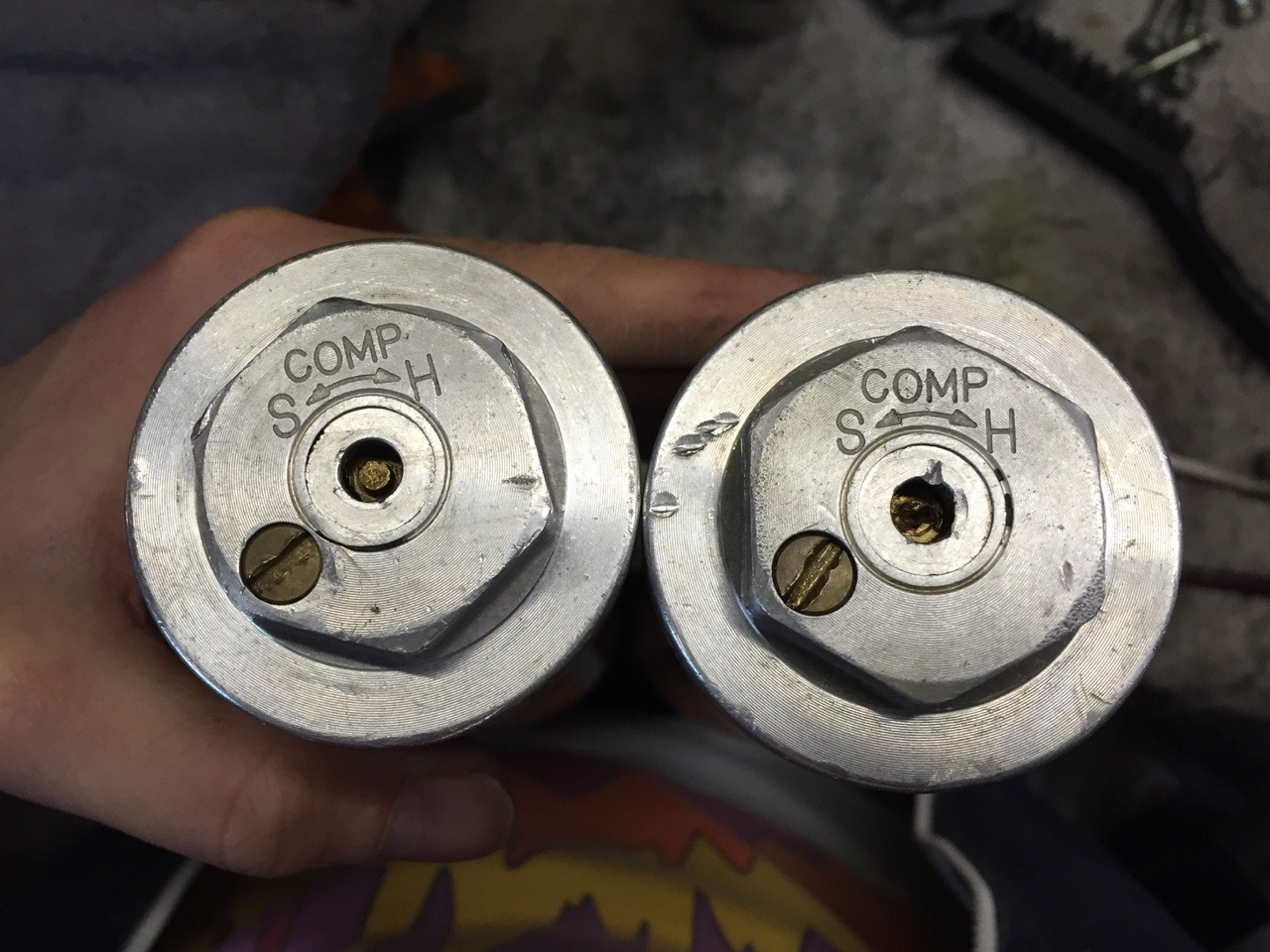 This is the only picture I could find of how they should look (I guess): 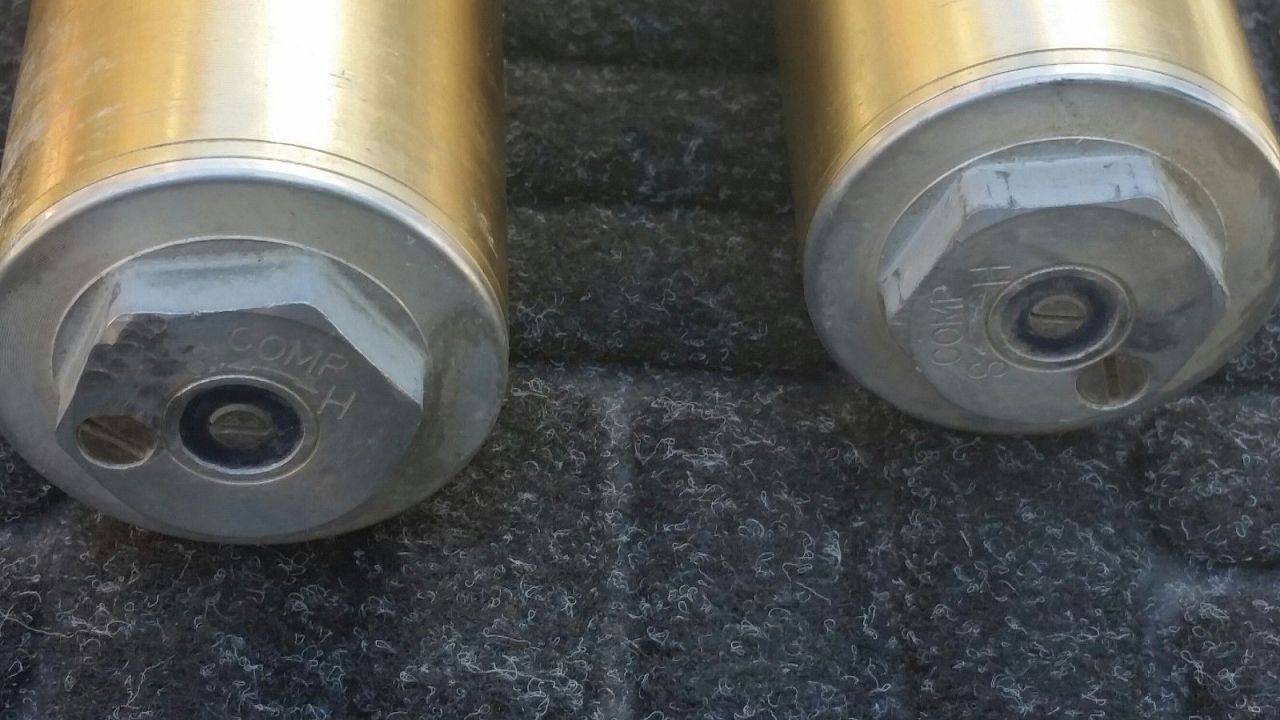 Making some progress on fitting the triples and rear wheel. 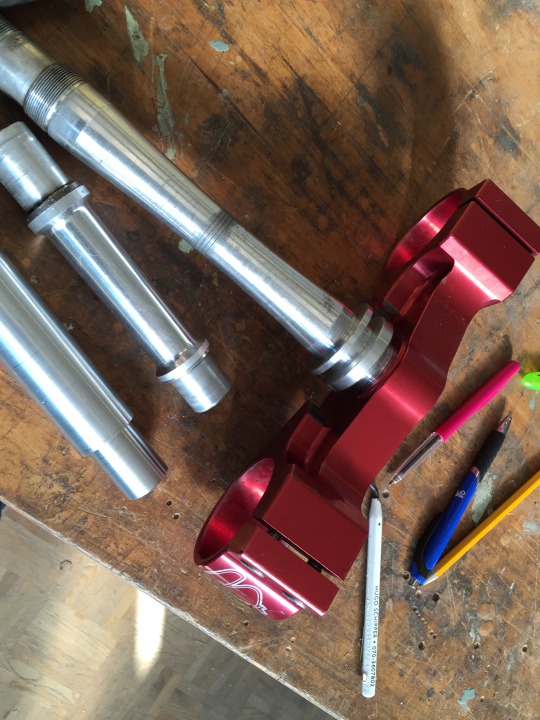 New rear hub bearing spacer with a ID of 17mm instead of 25 and spacers for the longer-than-stock headstem.

Wheels and fork are fitted to the bike. I still need to do some little adjustments but I'm getting there: 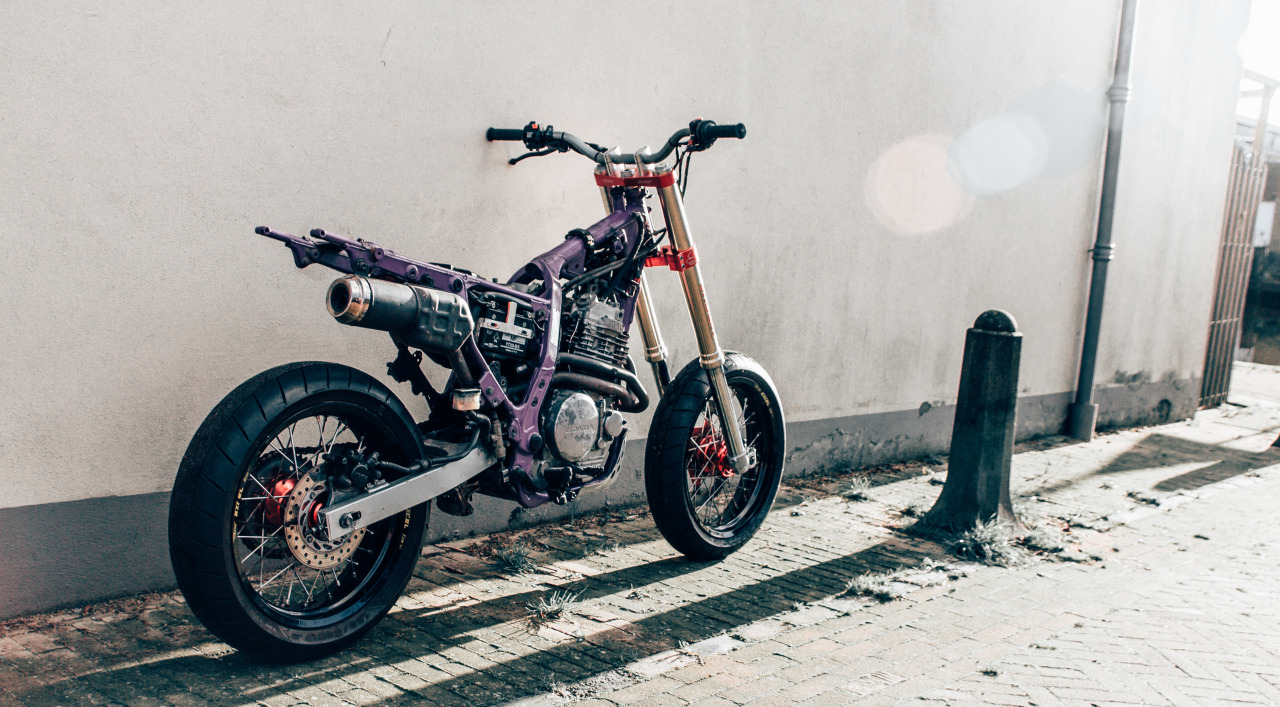 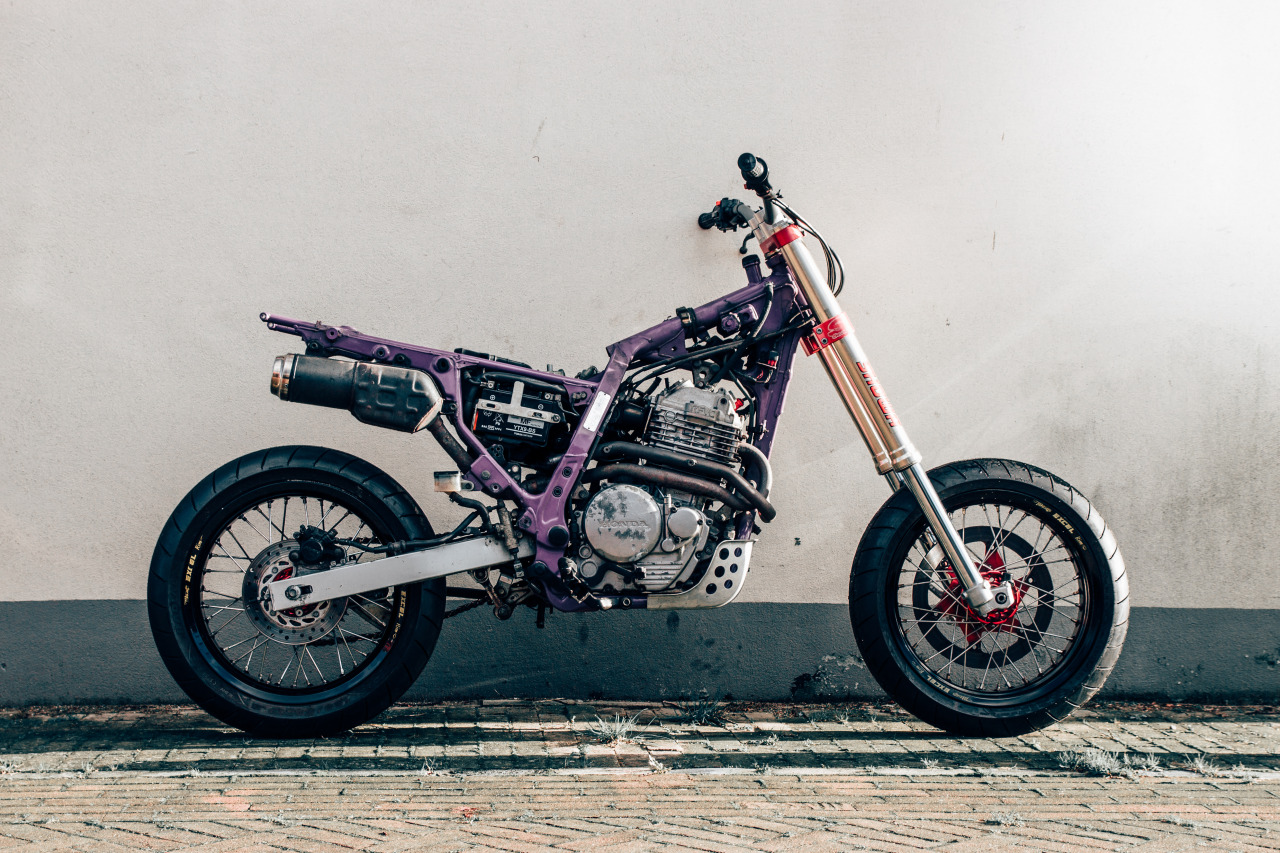 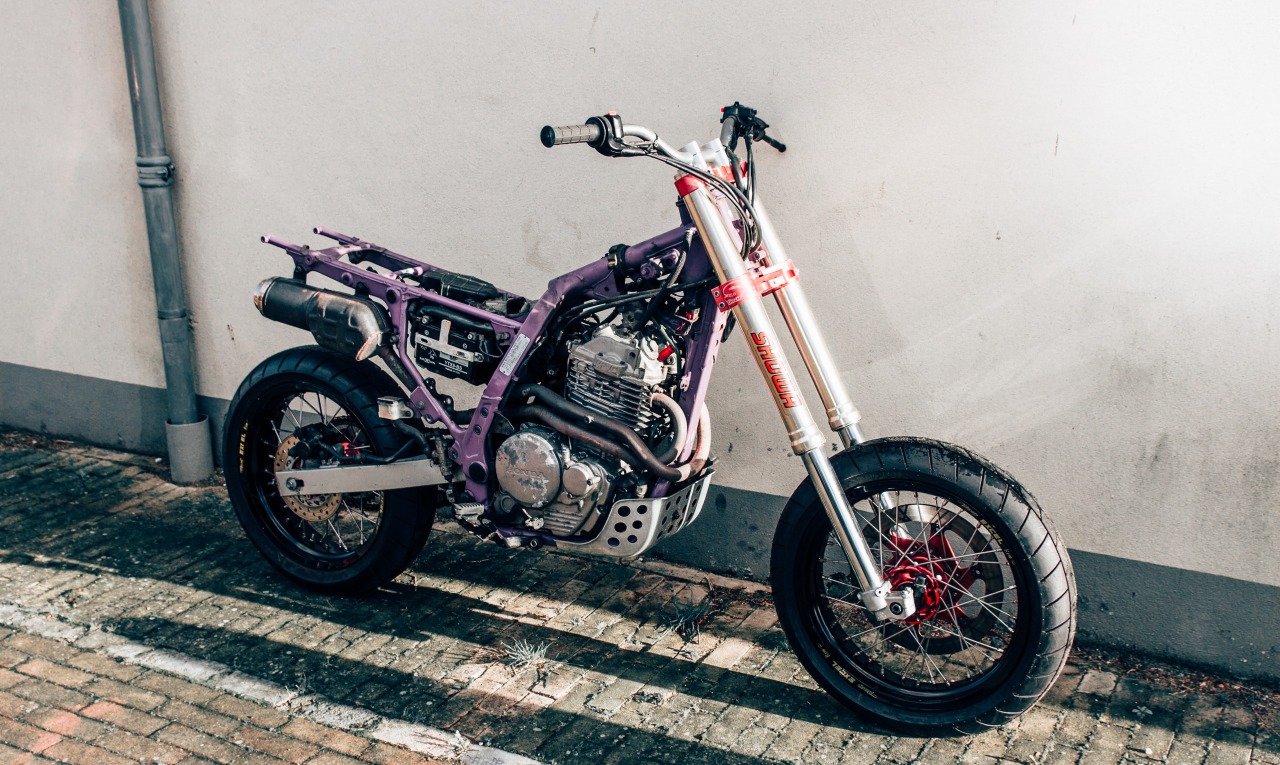 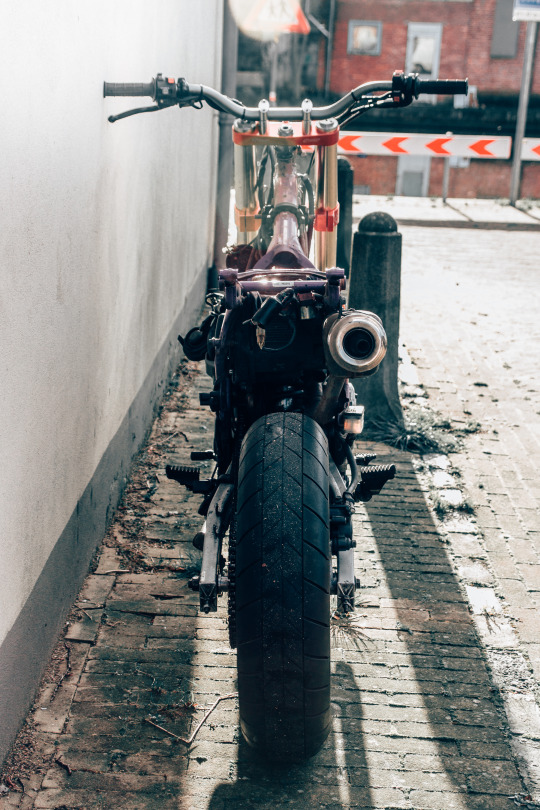 The bike weighs ~140KG at this point

Next steps are sorting out the (chopper)stance of the bike and misalignment of the chain. Oh and search for a nice petrol tank.

I let the forks slip through the triples to figure out how much I have to lower the forks. Around 45mm. 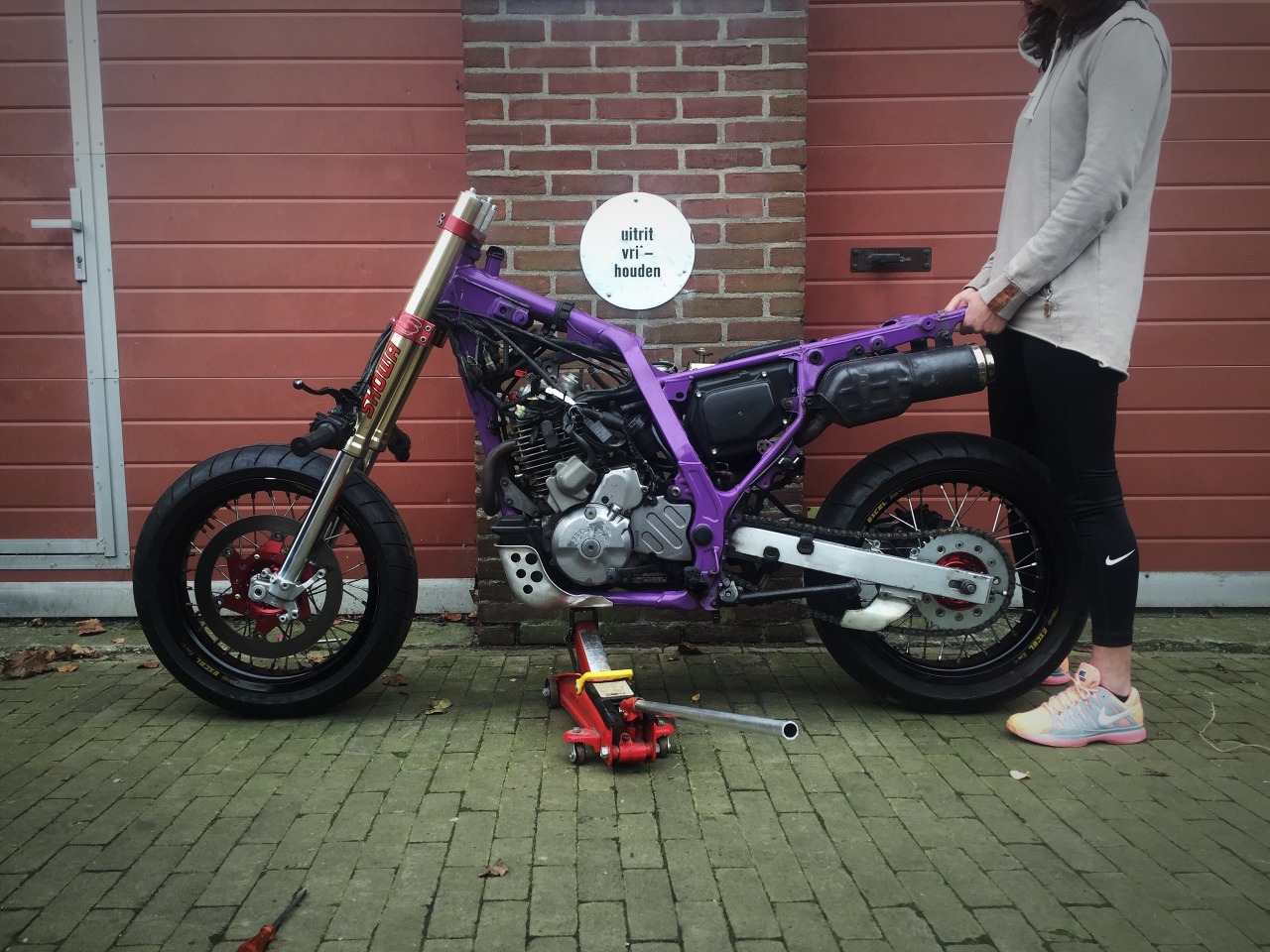 The 'stance' I settled with

DTT BOTM WINNER
Definitely some crazy rake going on there. I'd love to have that much travel, though.

Bang Cut Grind ..Dam Did I Need That Part ?

Tried to figure out the difference in geometries between three bikes. As I used pictures as a reference the results can be questionable though... 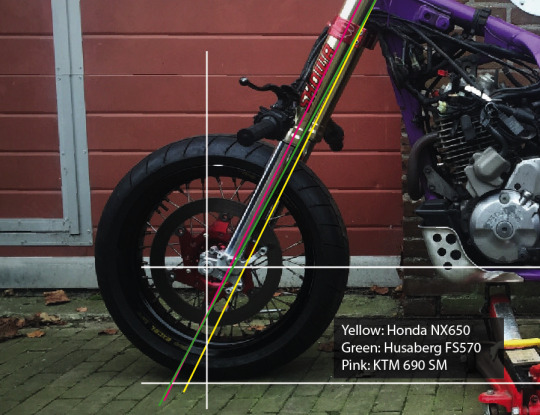 So it seems my bike has quite a bit less trail which should make the bike more nimble and less stable. My bike also has a little longer wheelbase than the other bikes.

I'm really hoping that the bike isn't going to be too nervous. 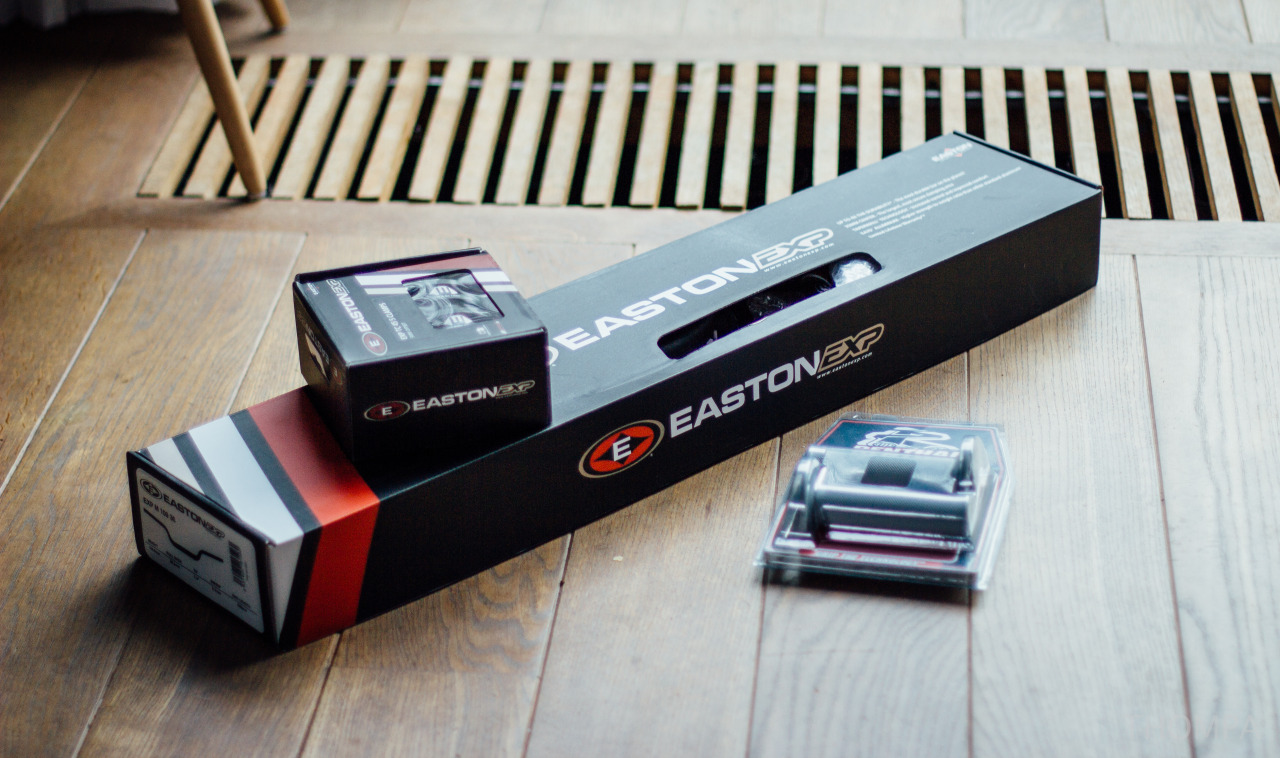 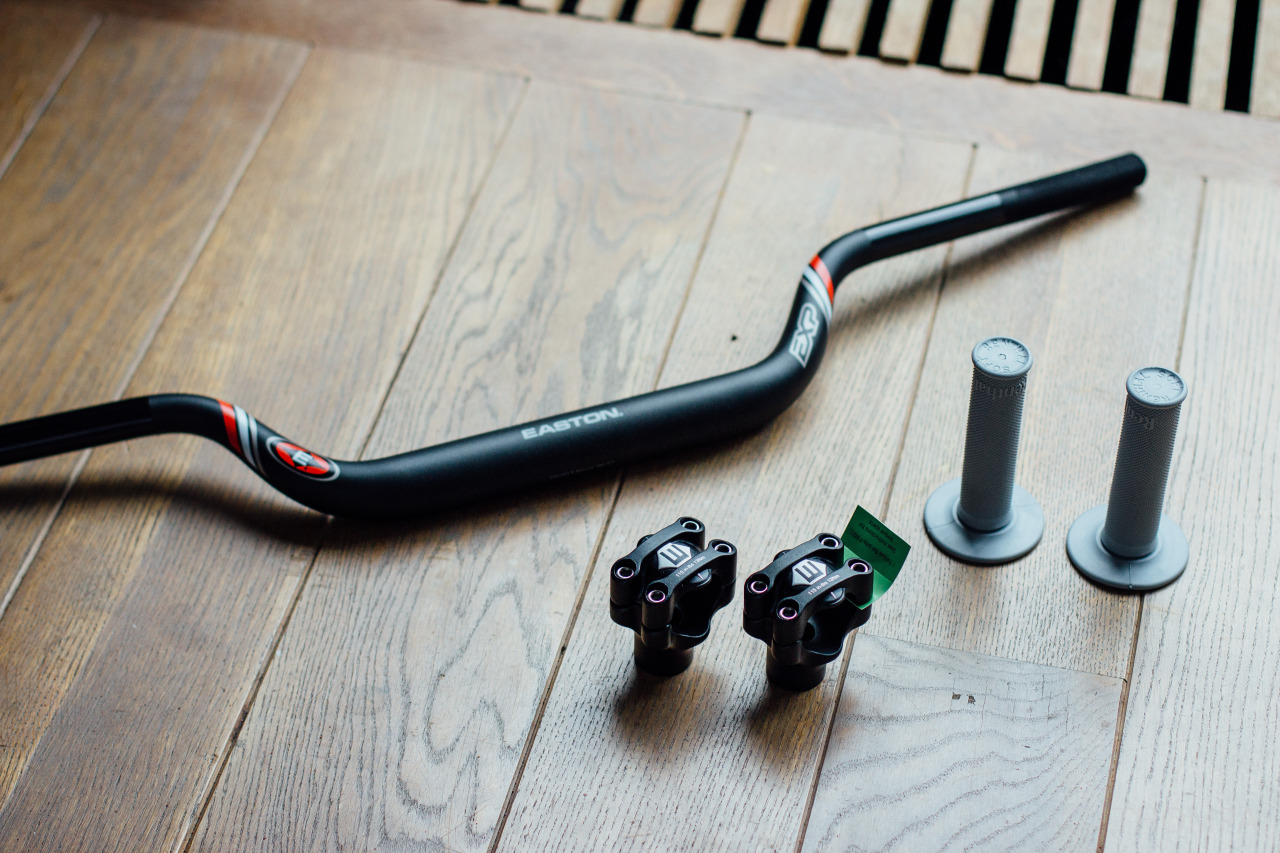 Signing on for this one. Sweet project you have going there, and you seem to know your way around tools and machine work

MotorbikeBruno said:
Signing on for this one. Sweet project you have going there, and you seem to know your way around tools and machine work
Click to expand...

The machining was done by Vincent, a friend from school. But since I watched him do it I should probably be able to make the parts myself by now. IF I was allowed to at the school workshop :

Slowly getting some more parts in. A new clutch perch! 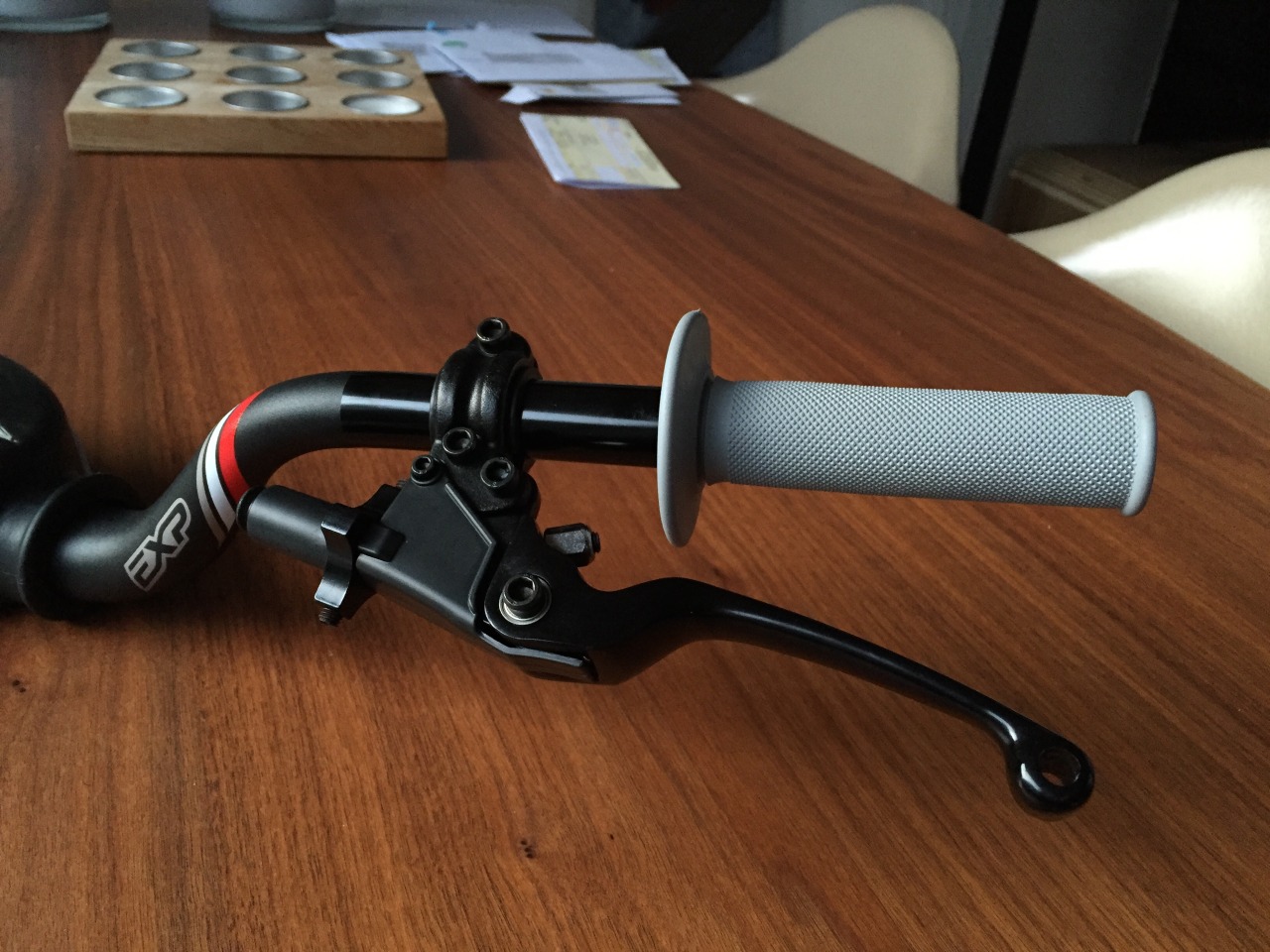 Those may be the coolest handlebars I've ever seen. I had no idea easton made bars.