I've had this project in assorted forms for about 8 months, and up until about a week ago it was going to be (another) cafe project. but living where I do (australia) it seems more people are interested in cruisery type bikes so bobber it is.

I'm copying this from over on the custom fighters forum http://www.customfighters.com/forums/showthread.php?t=57672 and will update both as I go. final post for those who can't be bothered reading;

**
so I've gotten sick of trying to plan a cafe build and I'm gonna do a rough and ready bobber hahaha. bought some 10" struts, gonna get a bobber seat (glitter thanks very much), and I'll be making it low and lean as possible, including a hand shifter and forward controls. its been sitting gathering dust, so will be making a start on it soon. in the meantime, I've got a stack of pictures for inspiration. lowering the rear will get it where I want it without cutting the seat posts, and gonna keep the clip ons, put the speedo nearer my leg too. 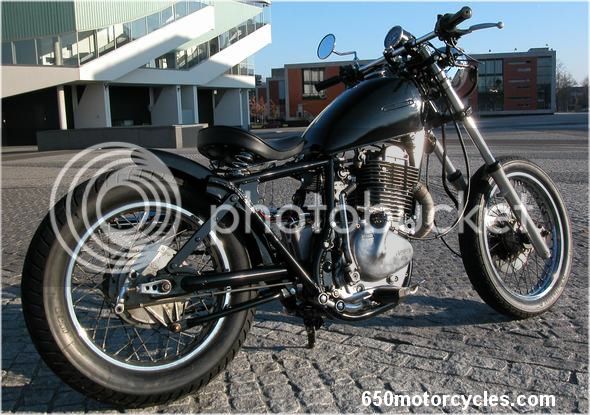 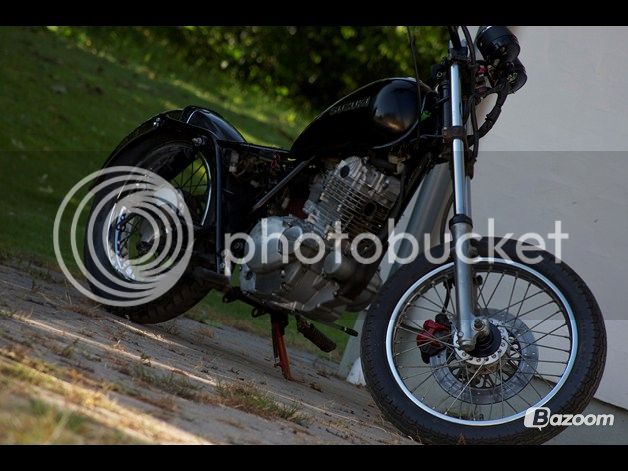 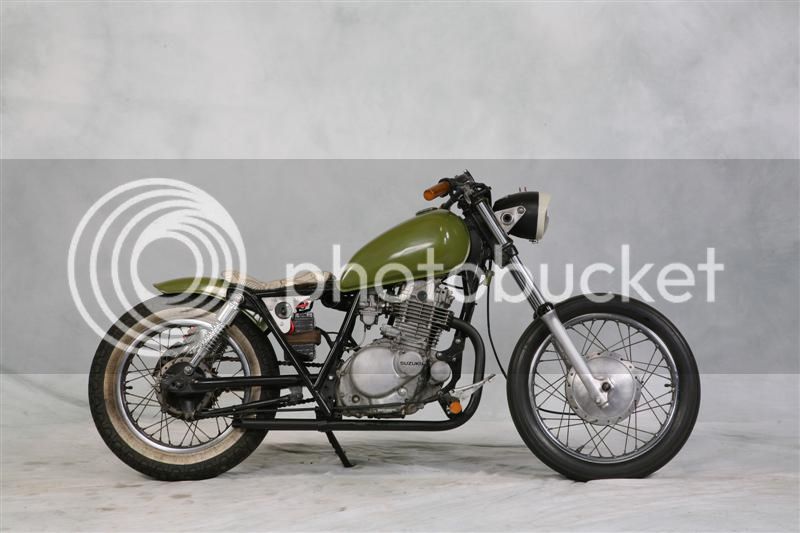 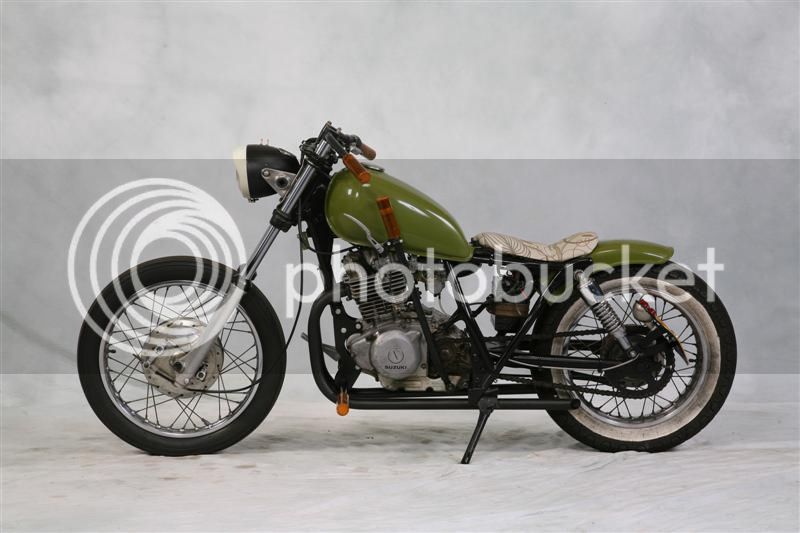 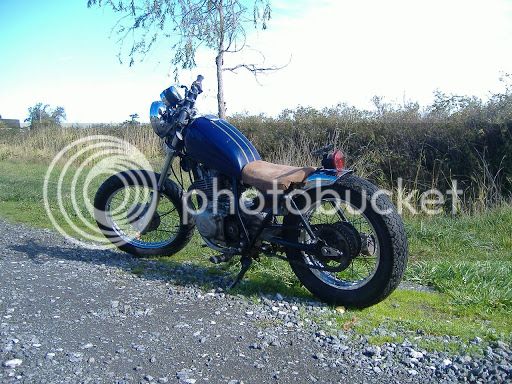 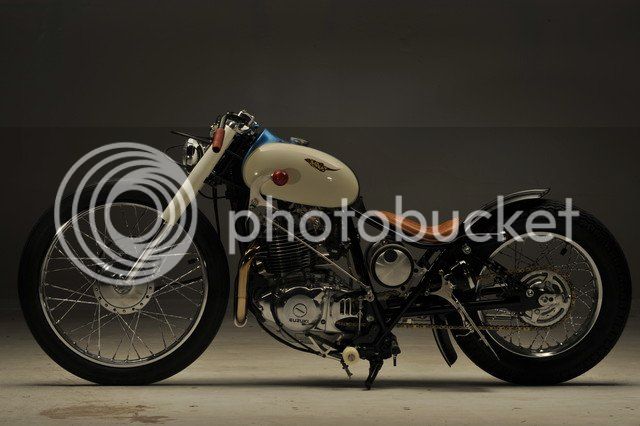 my little play with photoshop... 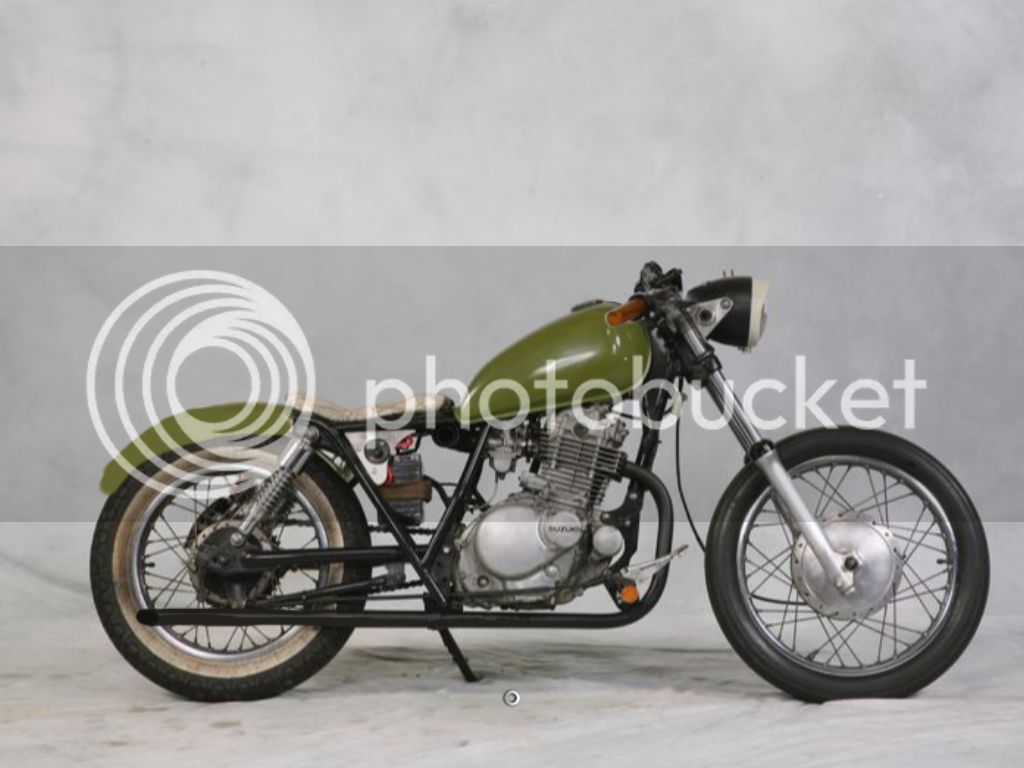 plan is to lower and hardtail the rear end with struts (got some 10" struts for a dyna on their way), cut the frame down, make/buy a seat (btw if anyone knows any good places to get cheap metalflake bobber seats, I will love you forever; no homo), make highway pegs/forward controls, new exhaust (to clear the F/ctrls) which will either be straight out the back just past the rear wheel on both sides, or angled up a'la frisco style on the right side, add clip ons, shorten the harness dramatically and get a new headlight, make a hand shifter (clutch on the shifter) and paint her up all pretty like.

I'm still iffy on names, my original concept years ago was ginnie the zombie hunter, last GN was a cafe called the redhead stepchild, just thinking about it now. any ideas would be great. I want it cute but tough sounding. like a chihuahua named butch.

yeah. so before anything starts, I need to change out the fork seals and replace all gaskets in the engine, been putting it off cos its a shit of a job

Looks like you have some cool inspiration bikes.... shoud be a cool project!

Just a thought but if your going with green paint like the picture how about "Snot Rocket"???

won't be green, its a really awful shade right now and I hate it. may go with matte black with gloss flames, will see how things pan out.

So I've not had a chance to work on the bike yet (who am I kidding, I've been taking advantage of my days off to do sweet FA), but parts are on their way and I've made a list of things to do so I can check them off.
usually with my projects I take a real get-er-done approach, as I'm usually riding the bike while I work on it. so more often than not they're rough and ready. this one I'm gonna take my time with, the bike show I want to enter isn't till april so I've got good time to get paint right, polish up bits that need to be shiny, and have a couple selections for exhaust for the final piece. I work tuesday to saturday so from here on in I'm a little stuck but I may do my forks tomorrow (provided I can find everything, my housemate has a habit of shifting shit that I need) and pull the exhaust off, put the front end back in and drop the engine (yeah I have to be difficult about it) for gaskets and painting.

I'm fairly dead set on the paint scheme, super glossy black everything with matte black detailing, with a Betty on the tank (hence; Black Betty). grips are going to be a solid colour, most likely green, which will transfer to the shifter and forward controls. still deciding if I'll stick with the stock lamp or get something a bit more unique, and while the tank is serviceable I'd like something a little more 'frisco', so I've been looking at (of all things) honda monkey bike tanks. they have the same spine width and frame mount placement points, so shouldn't be too much of a hassle to fit.

in the mean time, seeing as its been a fair while since I introduced myself, heres some of my previous projects.

my first fighter; an '89 vfr400r nc24. I'd love another one, that thing was bulletproof. also my brothers triumph chop, more of that in a tick.

from there I went through a succession of bikes, a '97 vtr1000f to a '91 cbr250rr, to another vfr400r (nc30 this time), to a TL1000S which was sadly buttraped by a blind cager who couldn't be bothered looking right before pulling out onto the road, then I got a fairly mint '86 gsxr750. which I then turned into the switchblade 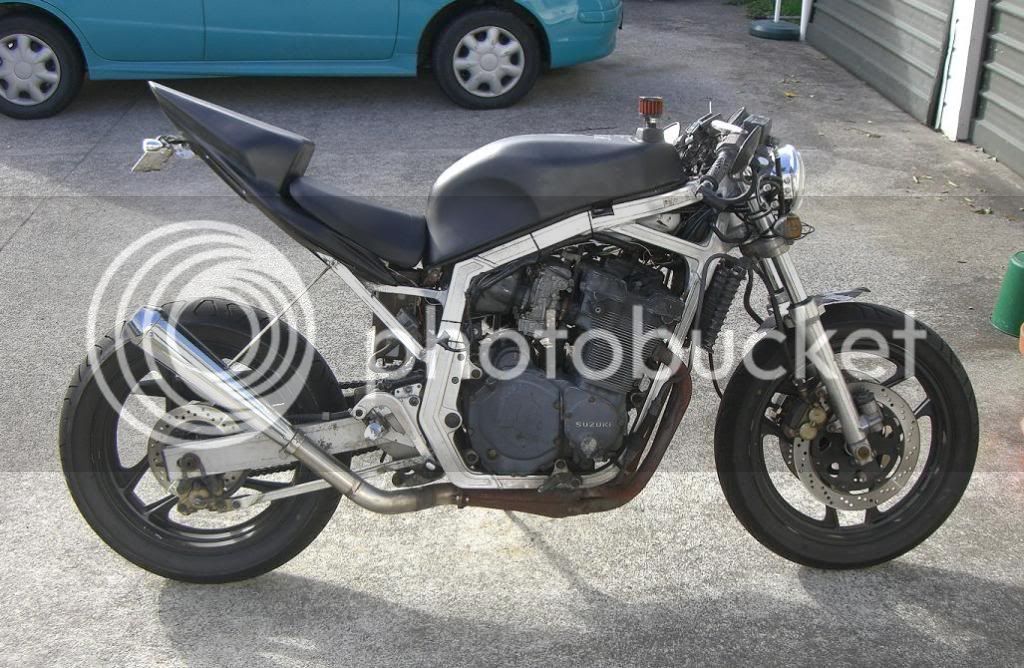 she was a real rat bike. bits were held on with zip ties and duct tape. but I learnt a lot from her (like don't ride fast in the rain when your rear tyre is bald.)

next was another GN250 which I installed clubmans on with intent to make a faux cafe, but the bike was loaded with issues, not least the starter motor that didn't start anything. I had to bump start it every day. then a massive hiatus (like 3 months) without a bike, and I bought a GN250 from a mate for $100. it was scruffy, covered in dirt and cow muck and rust, and I made my first proper conversion. nearly. had to sell it before it was totally complete in order to move to brisbane. 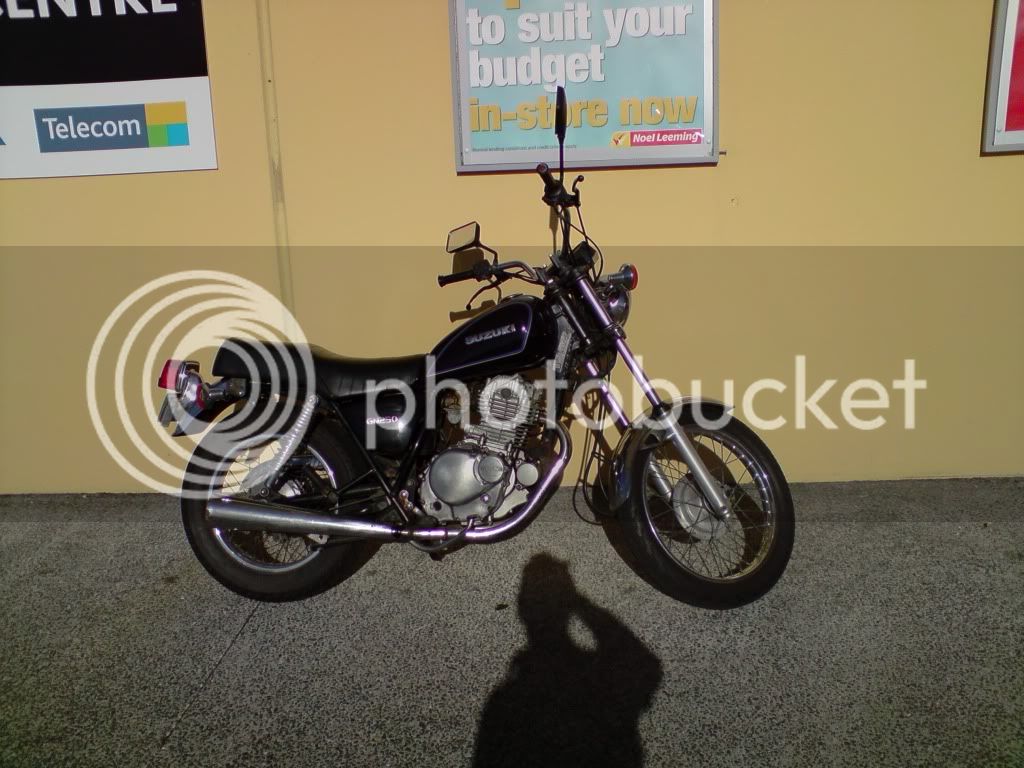 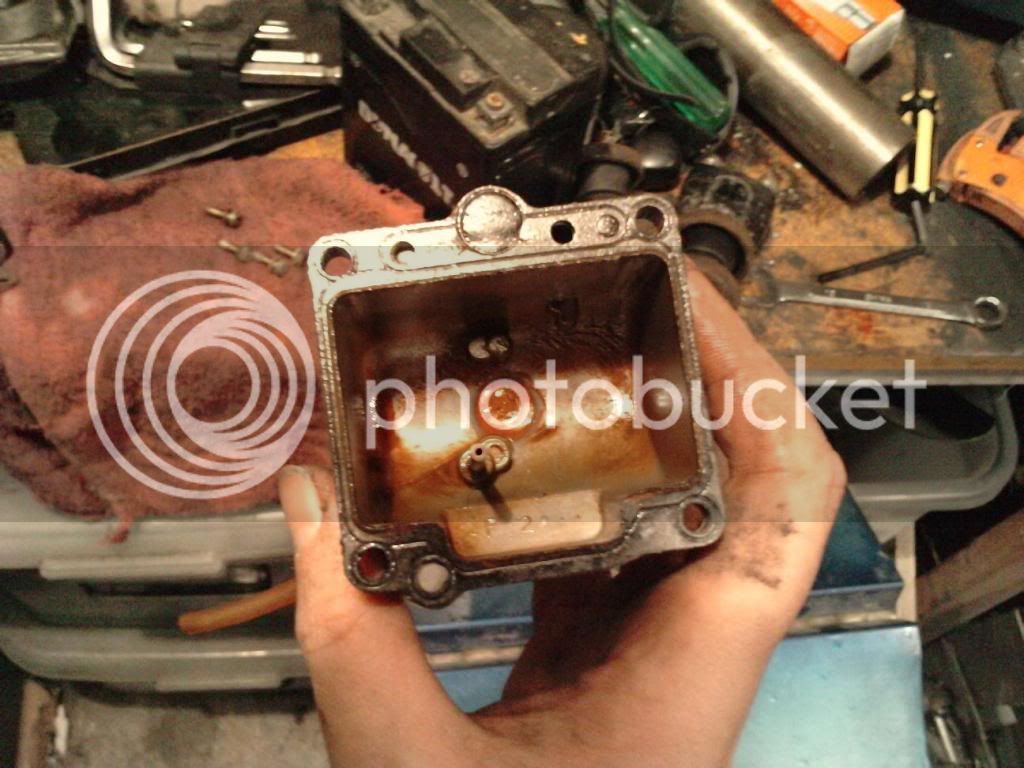 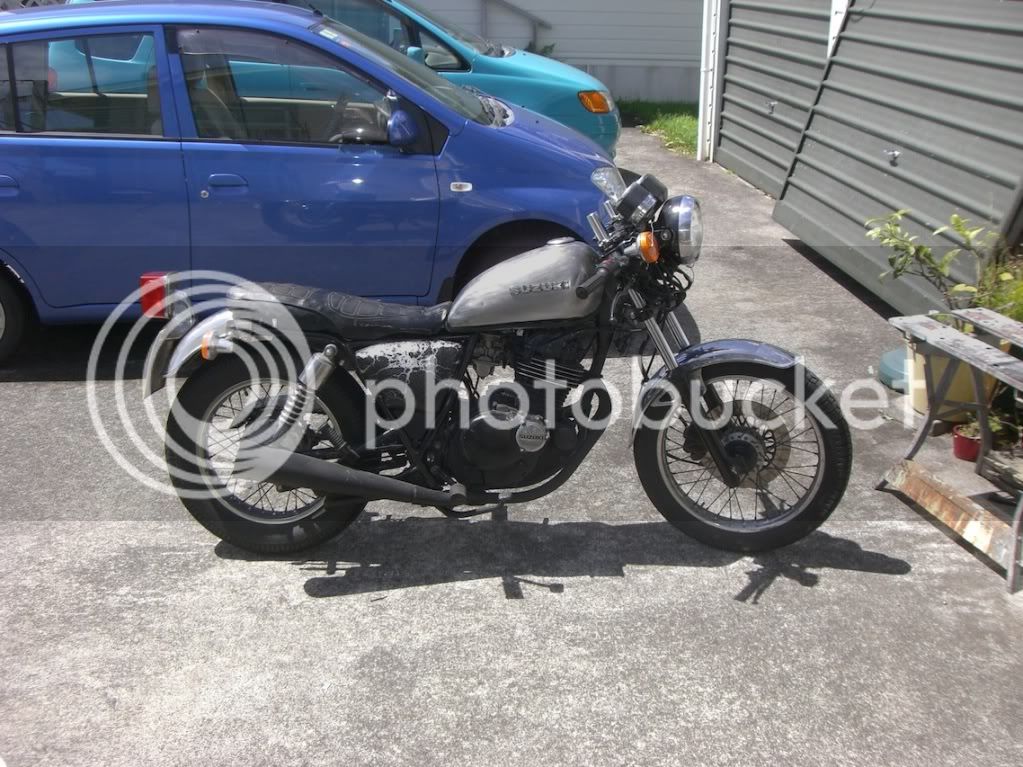 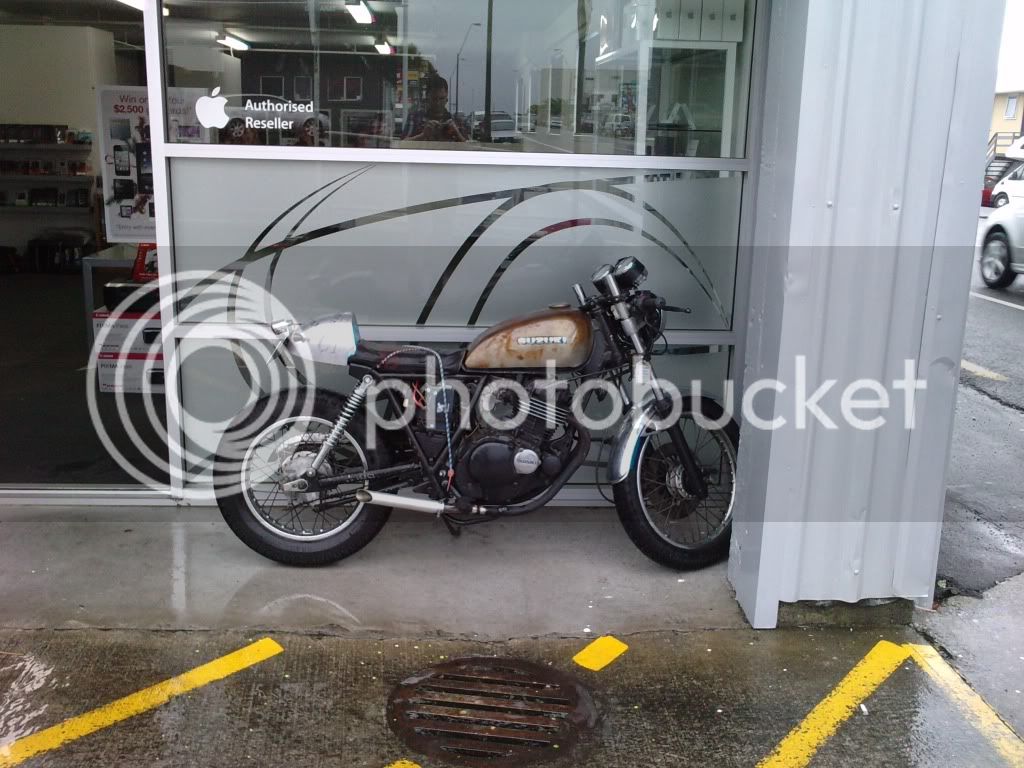 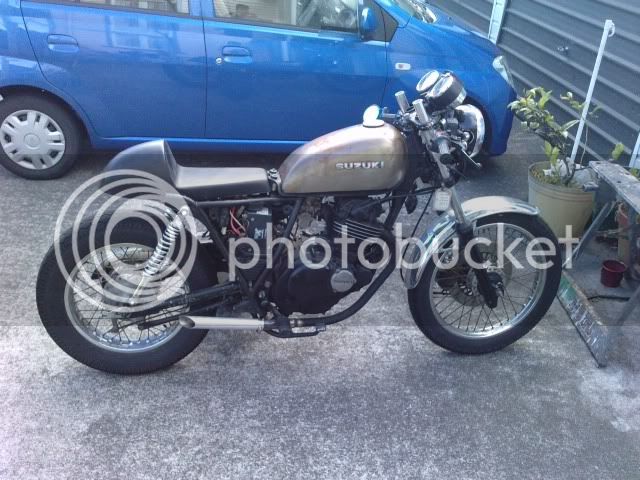 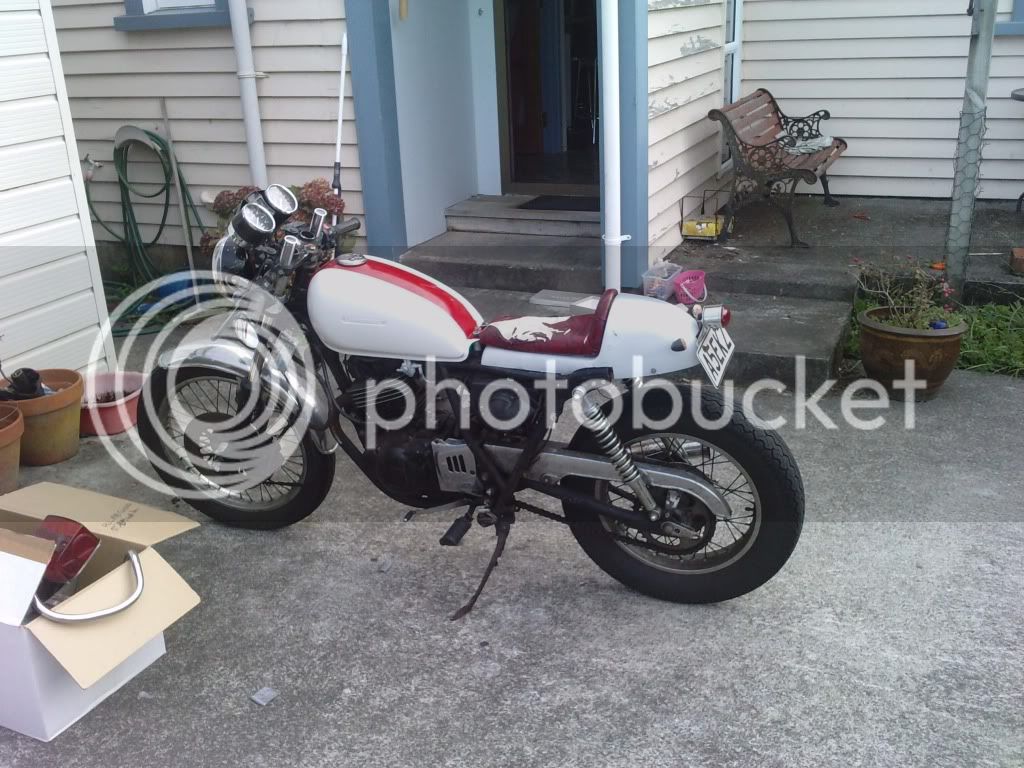 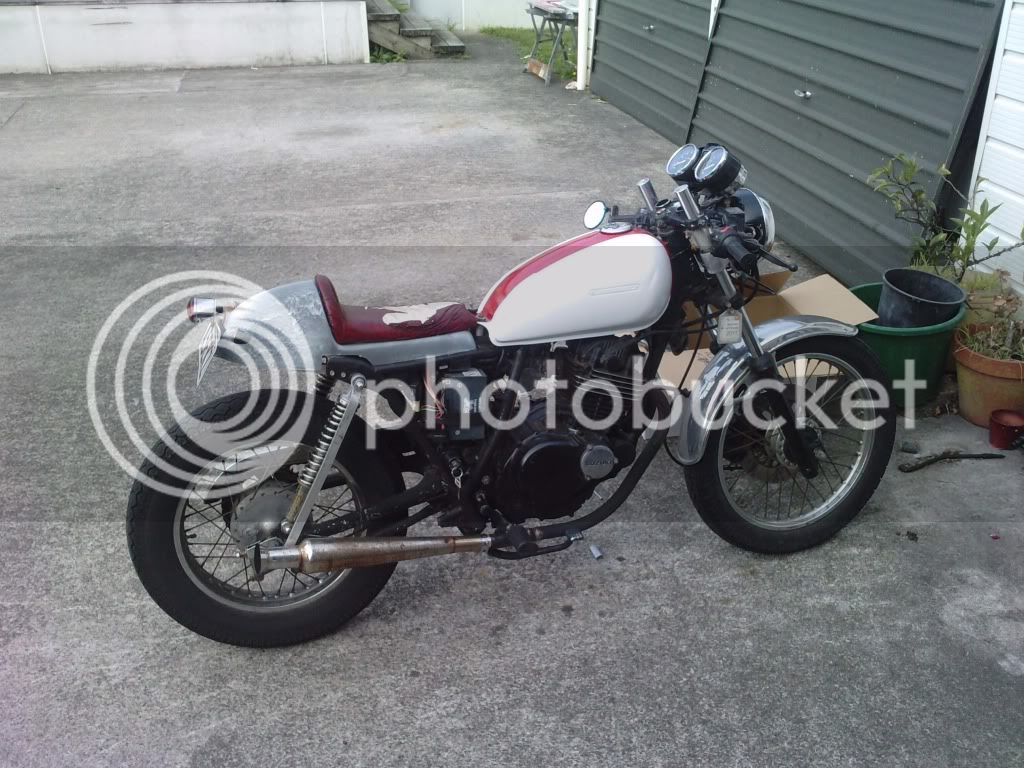 which brings me to this GN. original plan was to make another cafe, but to be honest I want something different. 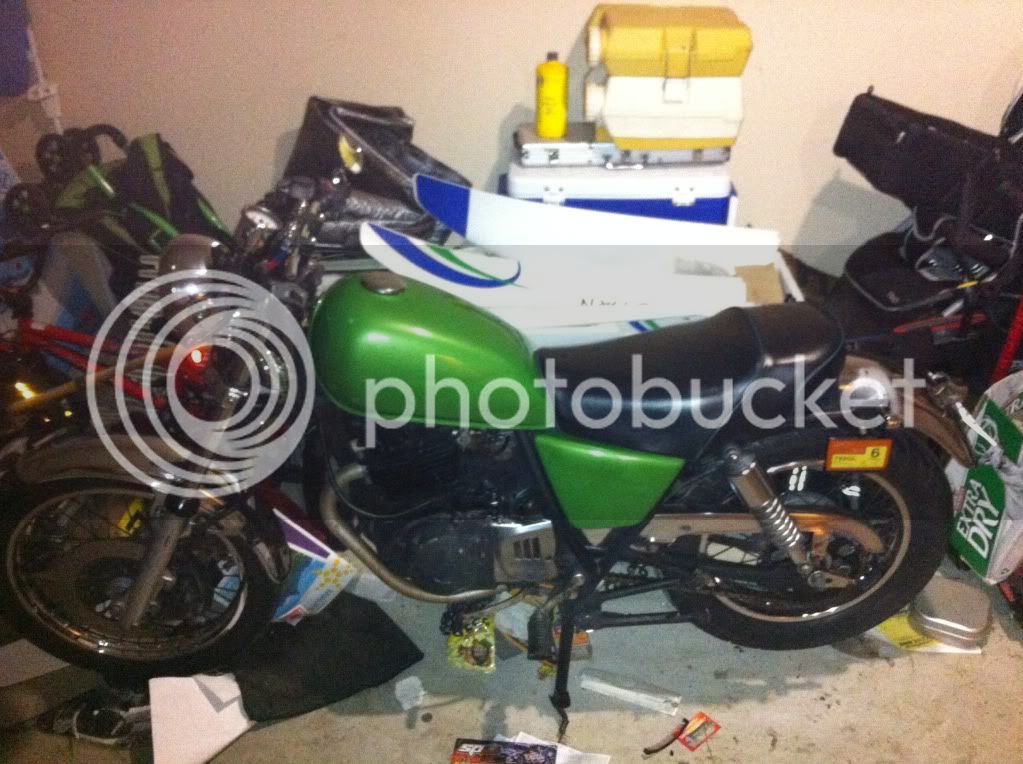 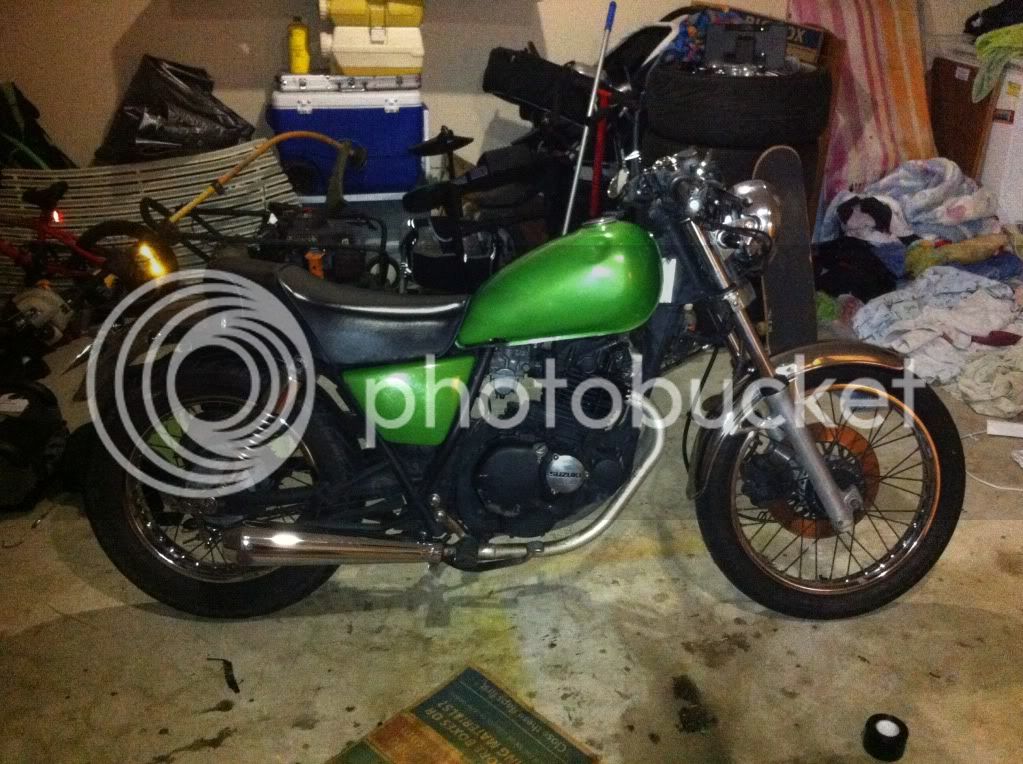 for the record I also have a daily driver, an '01 gsxr750, which will most likely receive some kind of fightering treatment if I keep it long enough.. 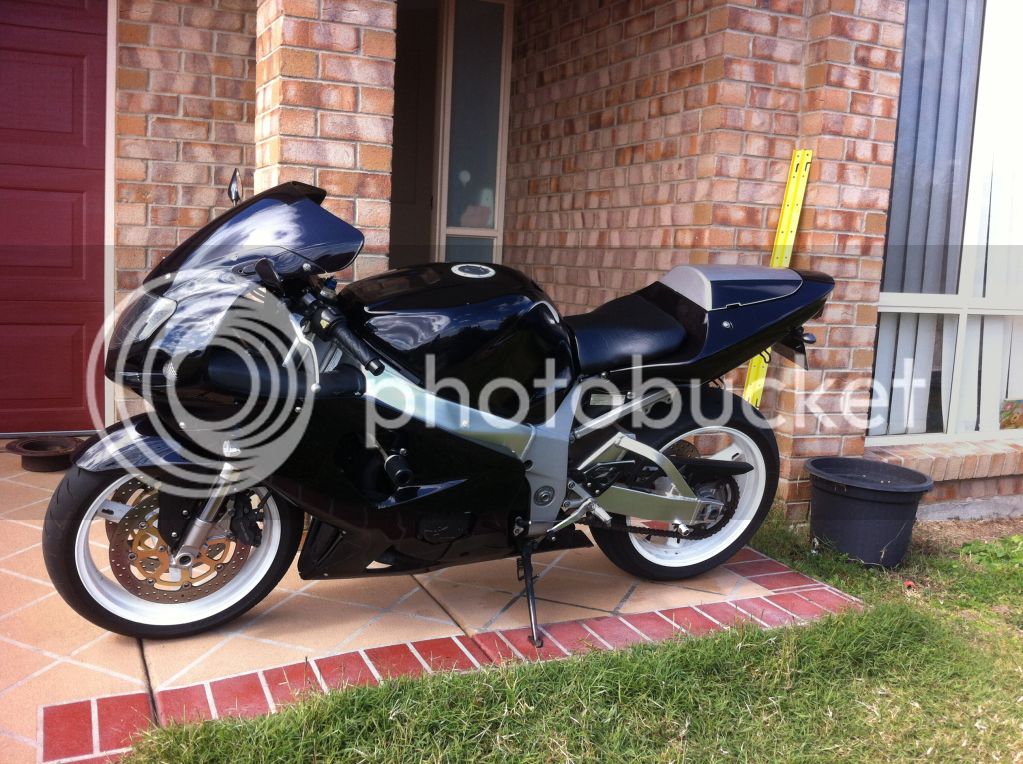 oh right. I forgot about my brothers chopper. its a '63 (or '67?..) triumph saint, 650 pre-unit. thing is bulletproof, and though it may look uncomfortable and unwieldy, he takes it for a 800km round trip every year with his gang of nostalgic chopper guys (a couple you can see in the pic above.)

honestly, is something here offending people or something? its weird coming in to see your thread and theres over 140 views and so far only one person has made any comments. little depressing to be honest
H

hi mate, top post you have had some good bikes, wish i had half ur luck! im in central qld and starting to bob a cm250 so keen to see what u come up with. have fun

Started on the forks. Got the left one apart and reassembled apart from the oil seal/circlip/dust seal, can't get it in just now, will get something to do it later like a piece of PVC pipe.

Onto the right fork, unbolt the bottom bolt and take it to the oil pan to drain, and nothing comes out... That's when I realize there was no washer on the bolt. Weird, but that's cheap and easy to replace. Just means the oil has leaked out already, which is pretty bad in itself... Get the oil seal out, pull the fork apart, and... There's no oil lock piece like there is in the left fork. Starting to question what happened the last time these forks were serviced. Now THAT is a piece that's harder to get hold of. Fortunately, found a place online that has the right piece still in stock, will be expecting it soon.

the rear struts arrived, pretty damn happy with them. Looking forward to getting them on there, still a little while off yet! also my new visor showed up