Good evening, ladies and gentlemen. I'd like to present my little build to Do The Ton community.


So it all started out when i wanted to buy a cheap Dominator for destroying in my local bike forum in 2013 February, i believe it was. Managed to get a 1990 one, had to drive to countryside through deep forests in a snowstorm to get her.

Here's the "beauty" (sorry for some of the pics' quality, no fancy pro cam here, just a phone): 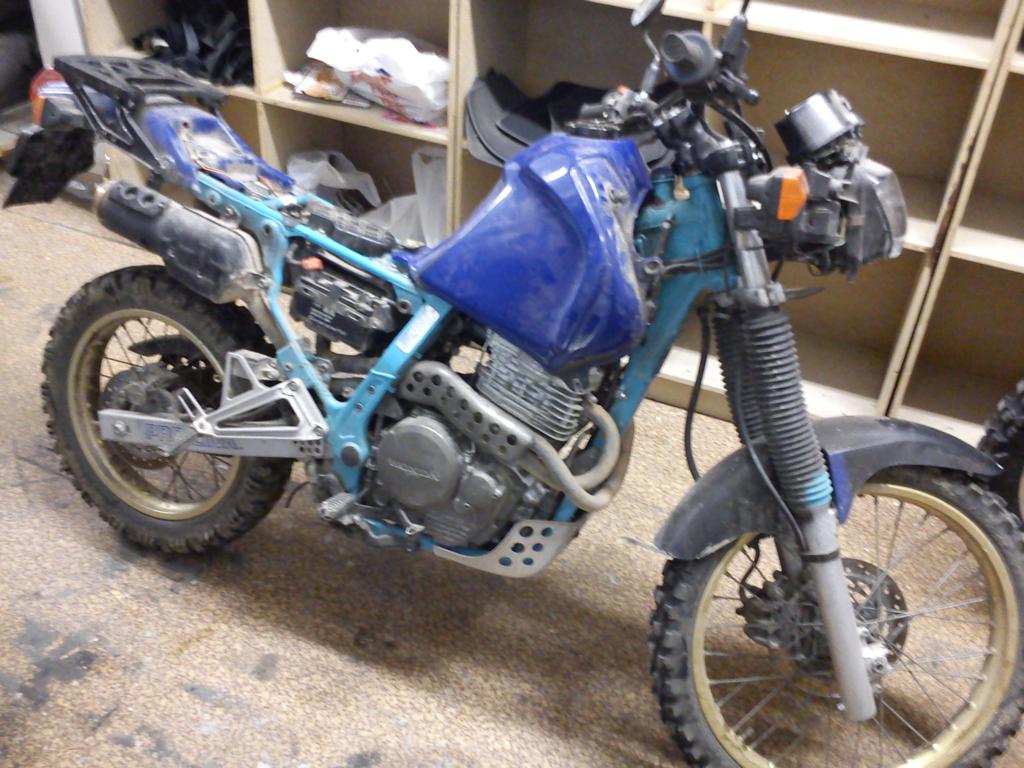 Managed to strip it down a bit already. It was missing the tank plastics to begin with but it was in quite a decent condition for that price. 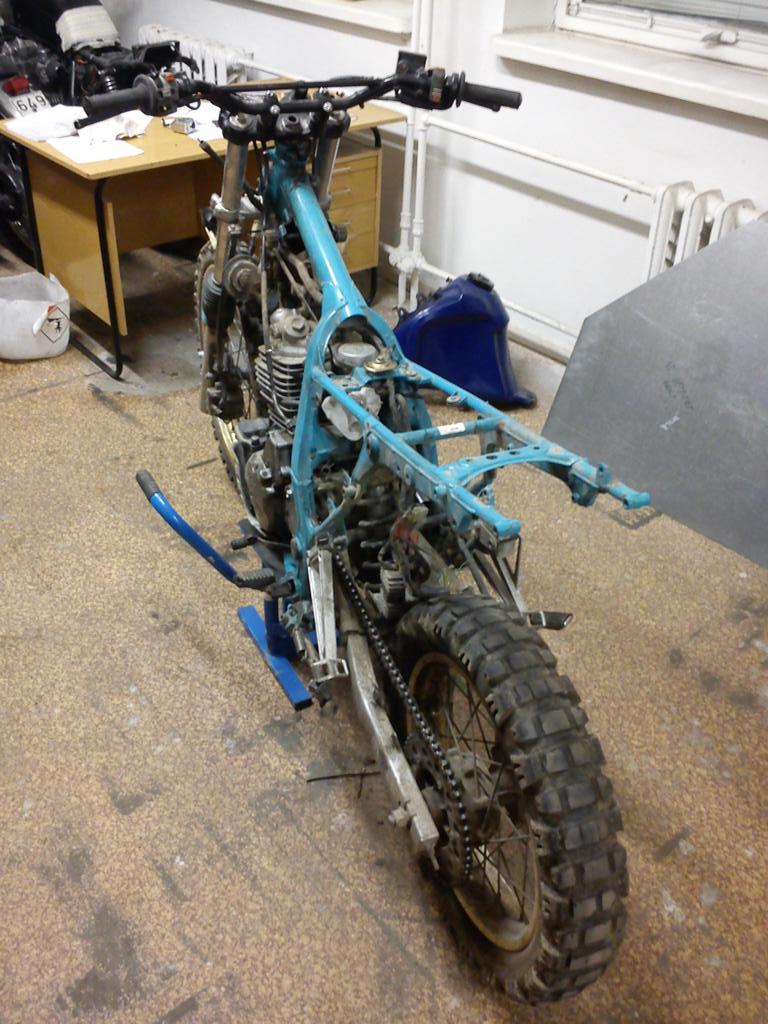 Trying on the tank i bought from German eBay. It's a classic version Honda CG125 replica if i remember it correctly. It's used in Thailand or Vietnam or India even nowadays, on replica bikes with strange names. Since i live in Estonia (Eastern Europe), we don't have used rareish parts on sale locally, they must be ordered from the web. By the way, the German guy had also built a Dominator tracker. 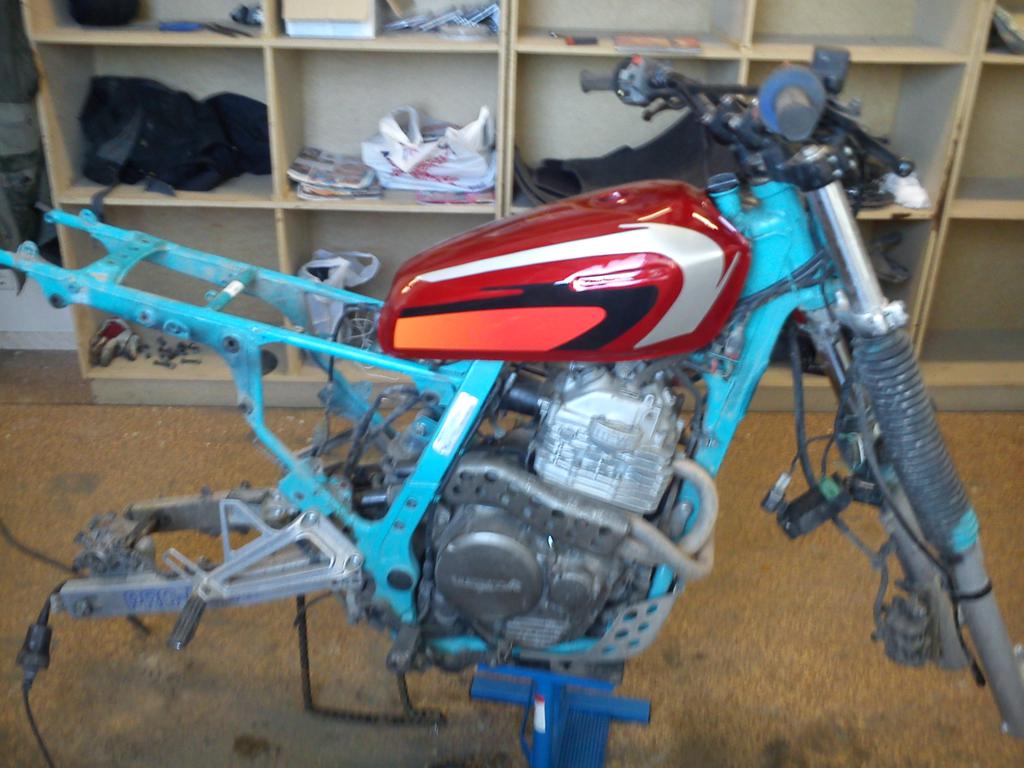 So what now? Now we brake the wheels into peaces. Domy's front wheel is 21" inches which may be practical, but is also ugly as f*ck. Managed to get rear spokes open, probably due to the chain oil that had been spilled onto them. But had to cut the front ones. Otherways i could have rethreaded them. They say it can't be done but there are some guys who can do it. Working on the spokes: 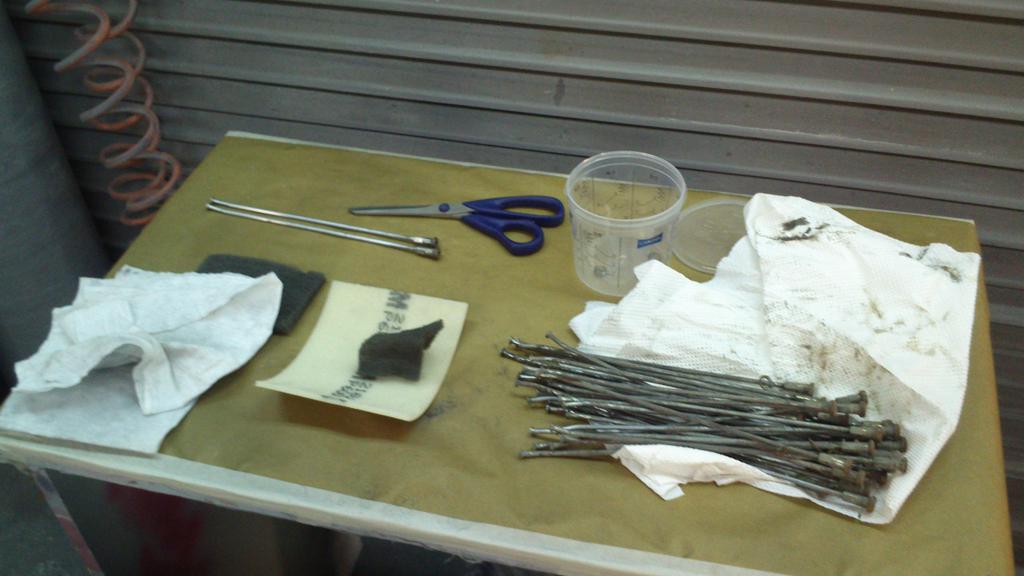 I decided to use original hubs when refurbishing. You can also use 19" Honda SLR front wheel but it also means that you must get a new caliper. Since wheelbuilding is really expencive, i decided to keep the rear wheel (17" X 2.50, 32 spokes) and buy a new front one, 19" 2.10 SM Pro rim. Again, due to my location, i ordered a new one from UK. Also, measured the original spokes, did a little calculating and got new spokes. DAYYYUMN they were beautiful. Polished the old rear ones too and had them zinc-plated or coated, however you call it. Cost like 2 euros or something (2.75 bucks )

Repainted the hubs, the front one below. No spray-canning here, proper coating and varnish. 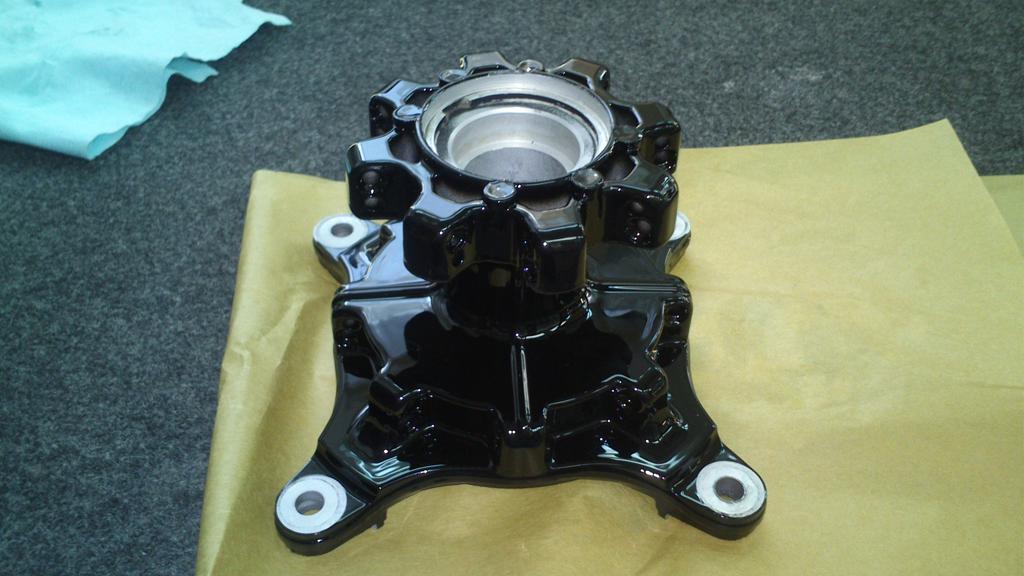 The rims were powder-coated to gain durability. And voila, partially assembled (new bearings for both, obviously, not in the picture): 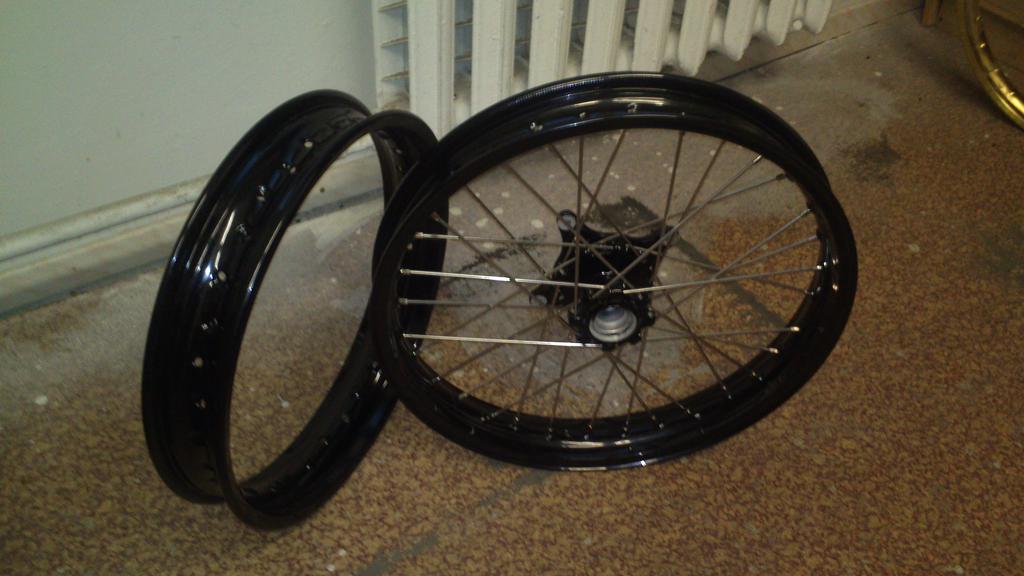 Got myself a brand new pair of Conti TKC 80s, from Germany again, and the result (not lowered yet): 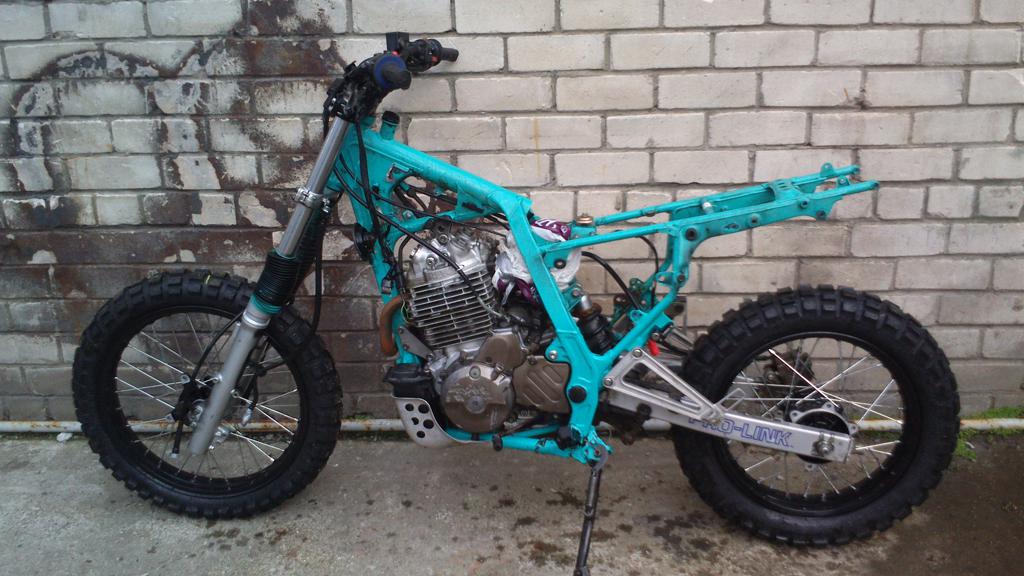 Next i got myself a new Leo Vince muffler, again from Gremany. Originally it came with fittings to a Yamaha (i dont remember which one but i didnt really care since i needed a custom manifold anyways). I call it the wasp's ass. 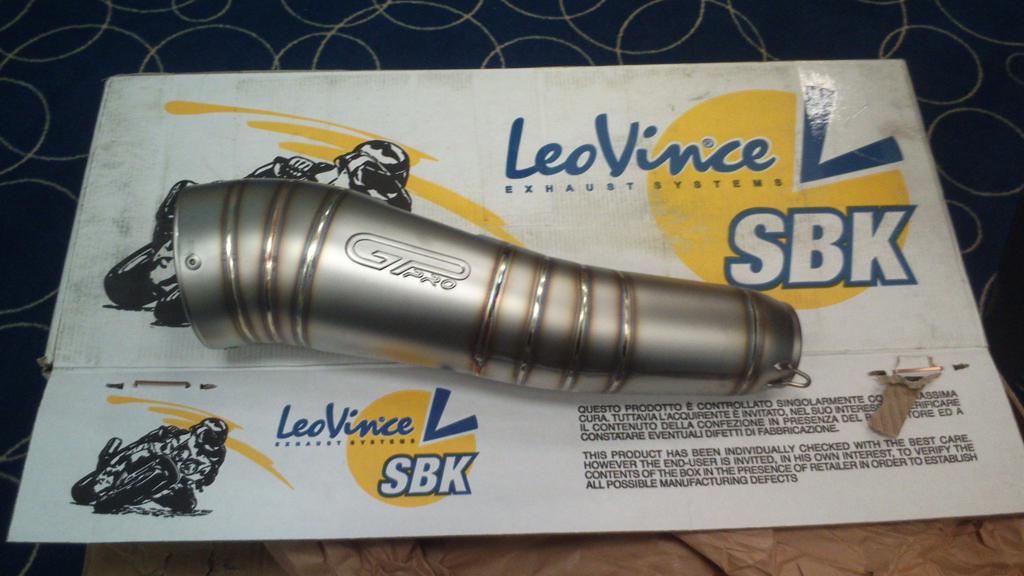 Then, i had a new stainless exhaust manifold made, since i dont have proper gear for bending pipes in my garage. The original ones were really thin. Besides, i couldnt have used them anyway because original mufflers were under the seat and this didnt go well with my "evil plans". 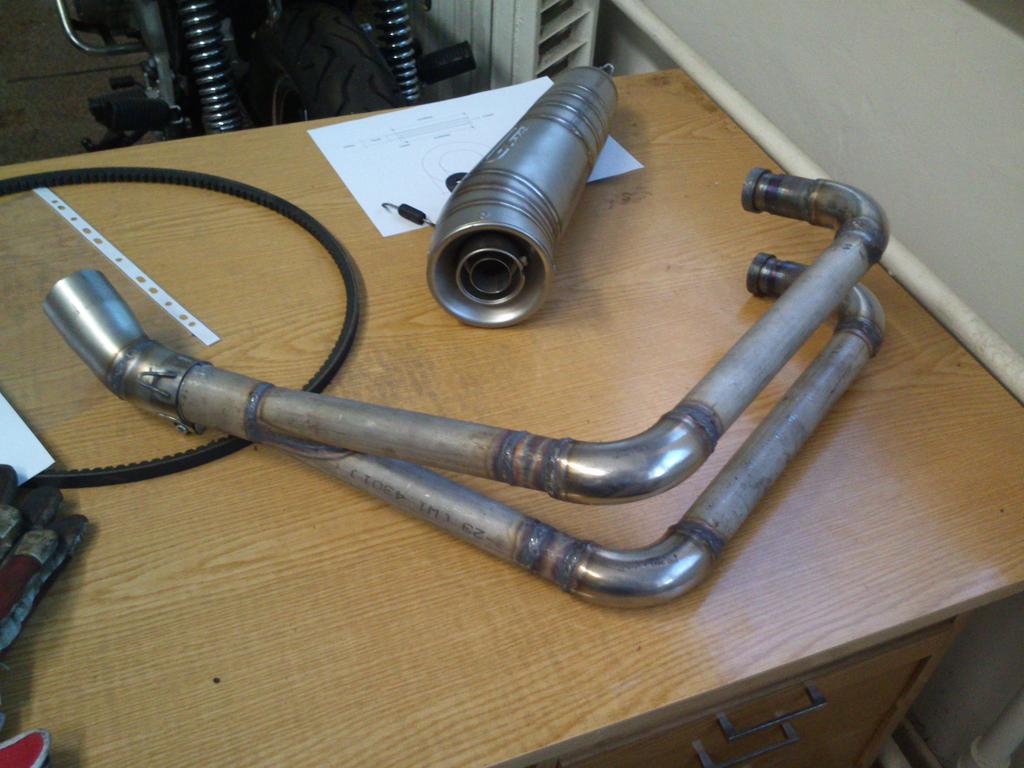 Next i cut the tail off because it was sticking up in the sky, especially after i had lowered the bike from the front for approximately 5 cm. This we cant have. Now, this took a few weeks of proper thinking since we have a proverb here - measure 9 times, cut once. 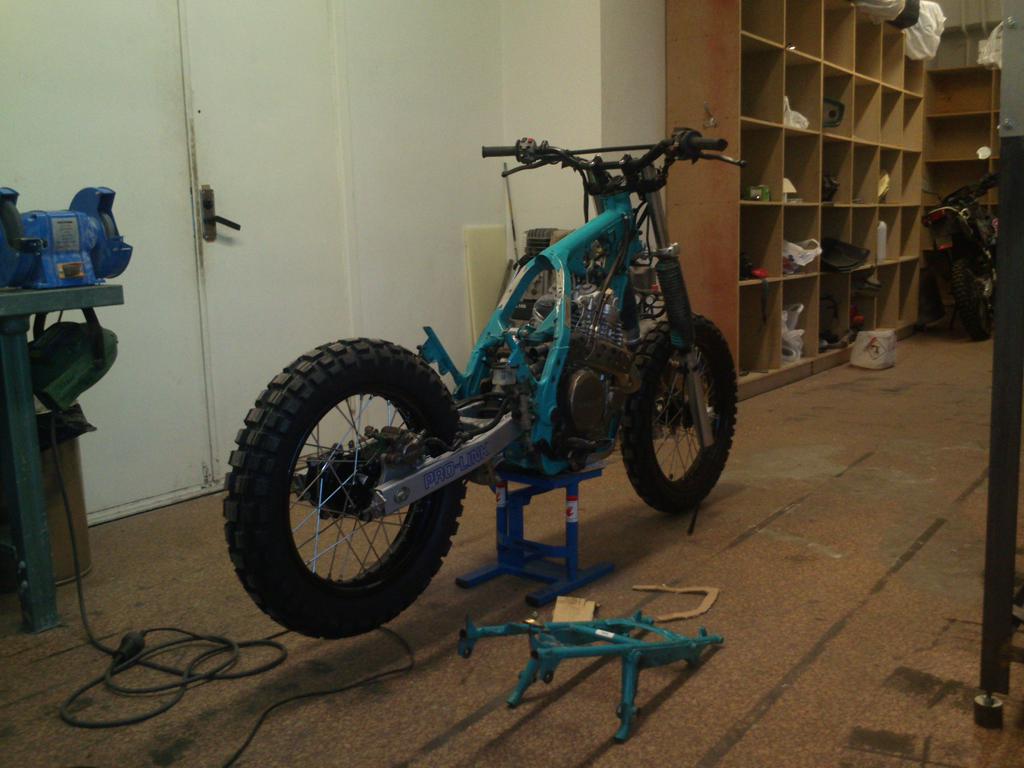 Then used the ripped spokes to measure the new "entry-points" The horisontal tubes had to be extended and bent just a bit aswell. 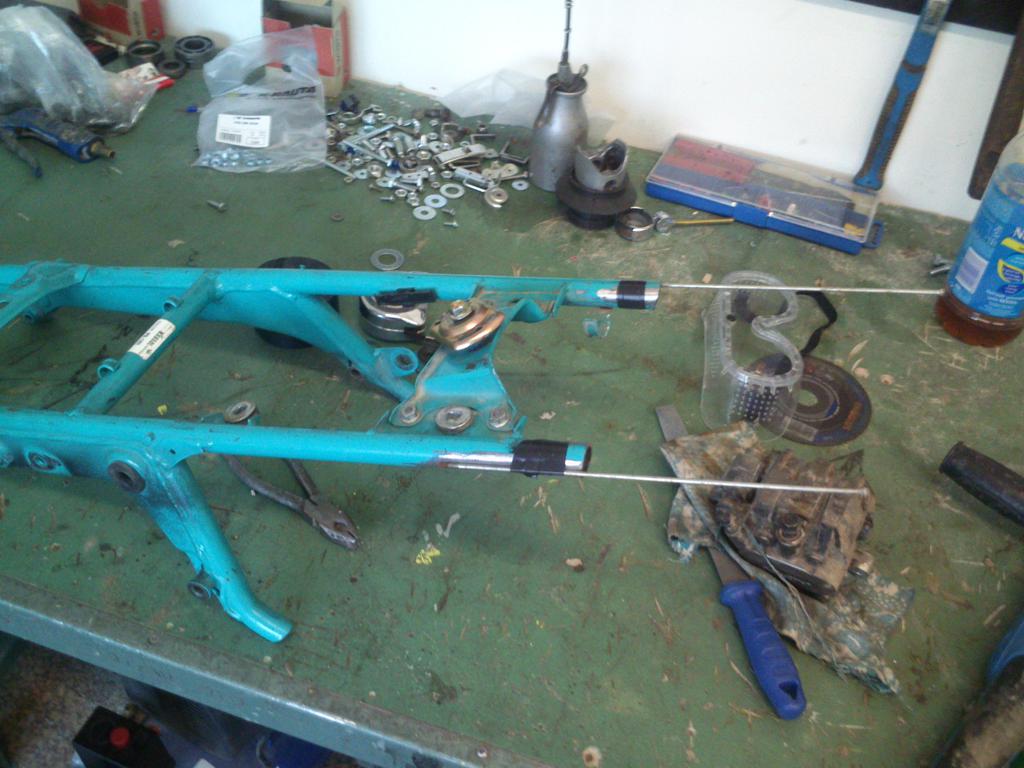 I didnt think that id like straight diagonal tubes of the subframe, its too sterile and minimal for this kind of a bike. Anyhow, after re-attaching, with loop in the back. Looks a bit like a dachshund in this picture but its really a nifty piece of machinery. 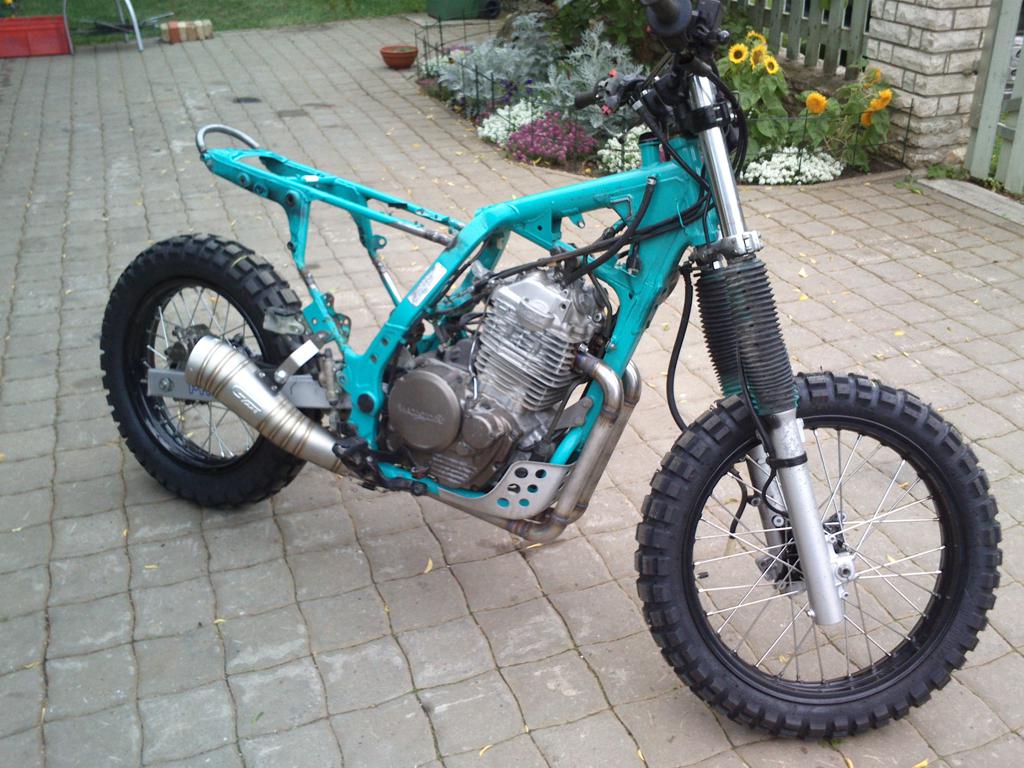 Some pics of working on the frame, still in progress: 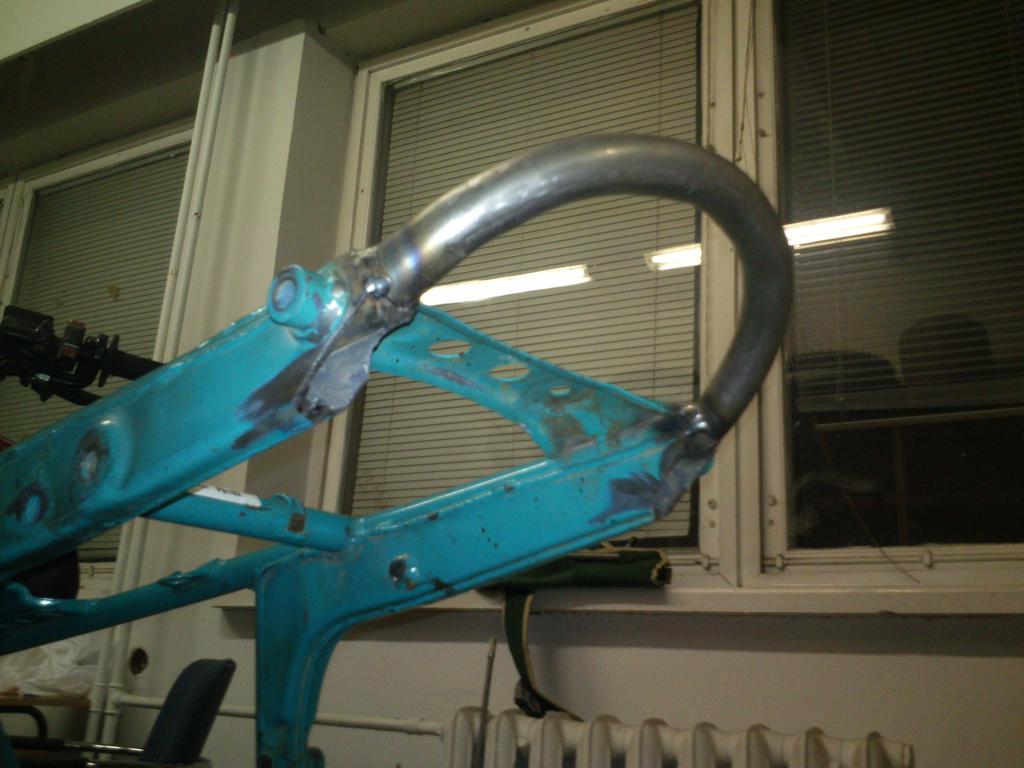 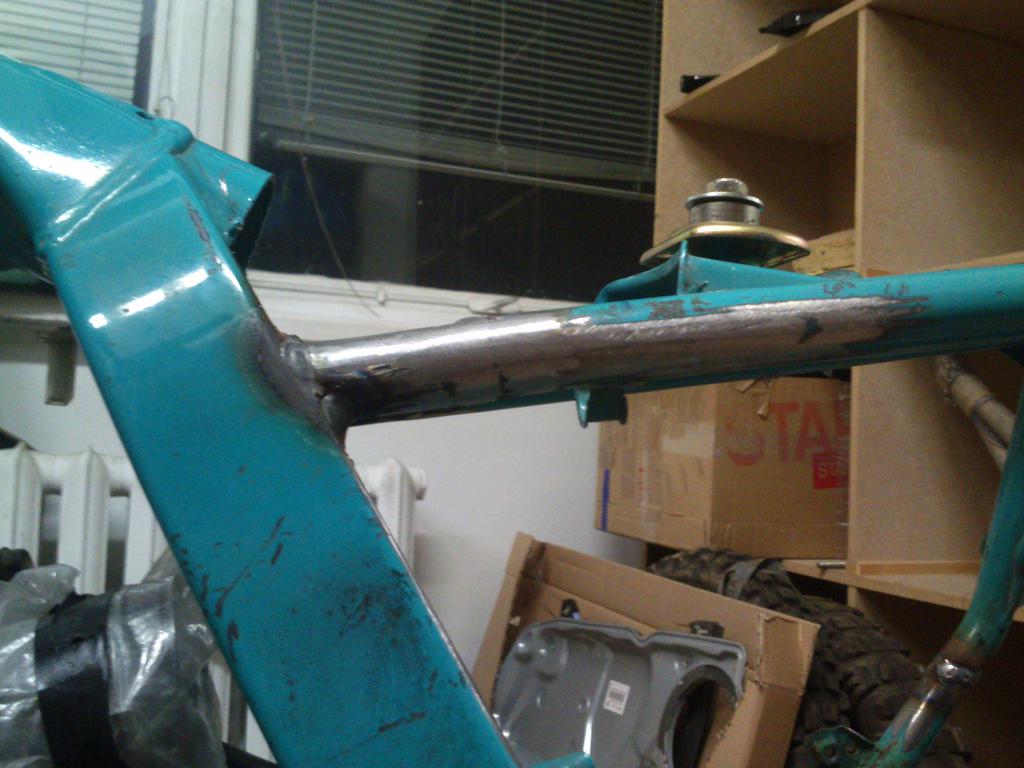 See the hole below the horisontal tube, this is where it used to be attached: 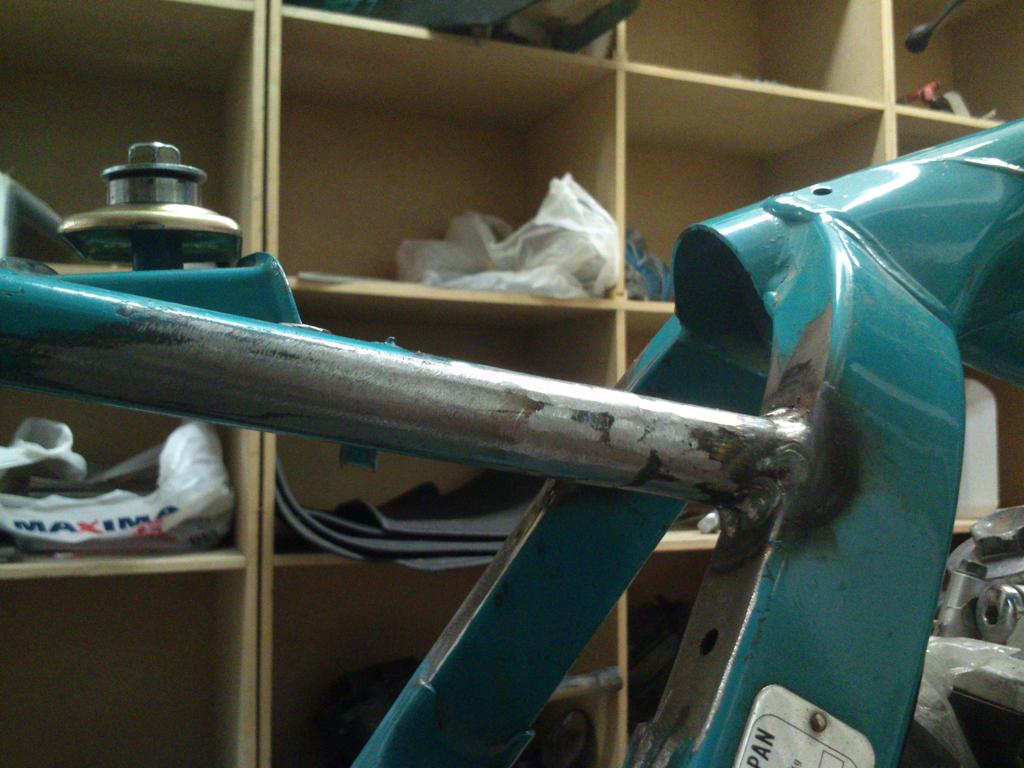 Working on attaching new tank, attached and measured but waiting for a weld: 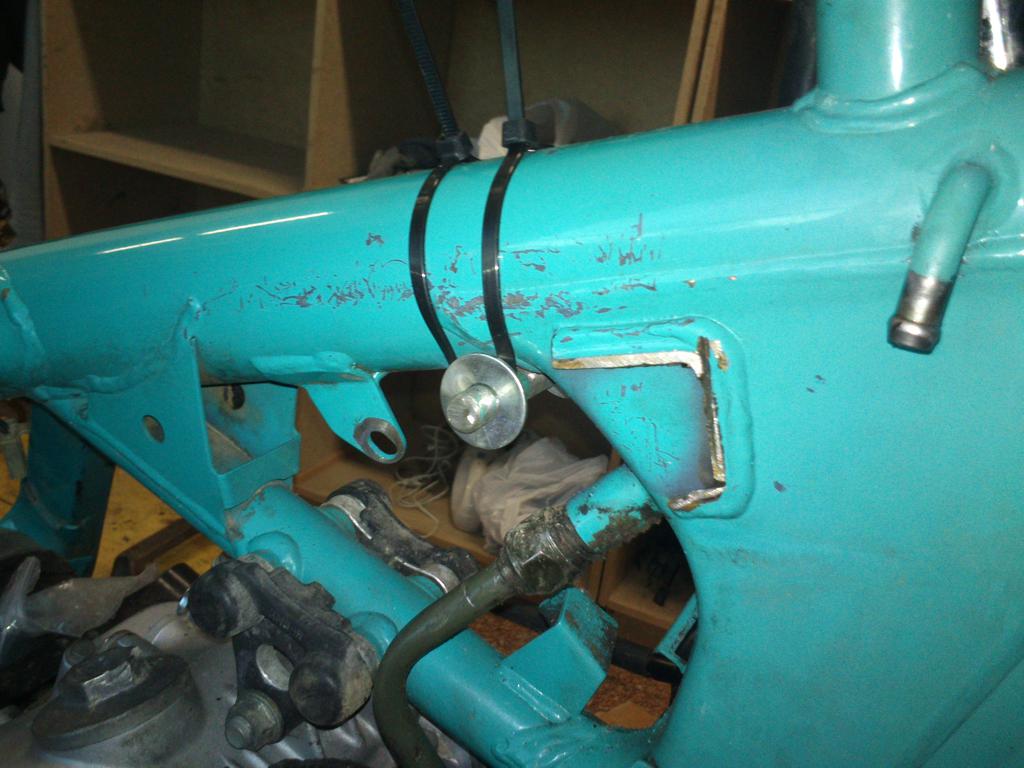 Last week i welded new brackets below the the tank i had cut off previously. The location is perfect but also managed to weld a hole in the tank. DAYYYYYYYYYNG! But hey, aint nothing that cant be fixed.

That's all i can some up with right now. Deadline is next spring. Got lot to do besides the bike and the progress is not as fast as id like it to be.


So for now, give me fame or detest this old piece of junk ;D

Signed up. Fantastic, I love it! You are doing a lot with a little and that, sir, is commendable.
T

Thanks a lot, mate Although i must say, cant get parts cheaper because the donor is cheap. Nobody cares. But worth every penny, still!

2 guys in the garage is always more productive than one. Today my friend Dave helped me to fix the little hole in the tank i made when welding the mounts. Doesnt look very pretty, but fits like a charm and is strong enough. Im really pleased how it turned out, got one thing done again. 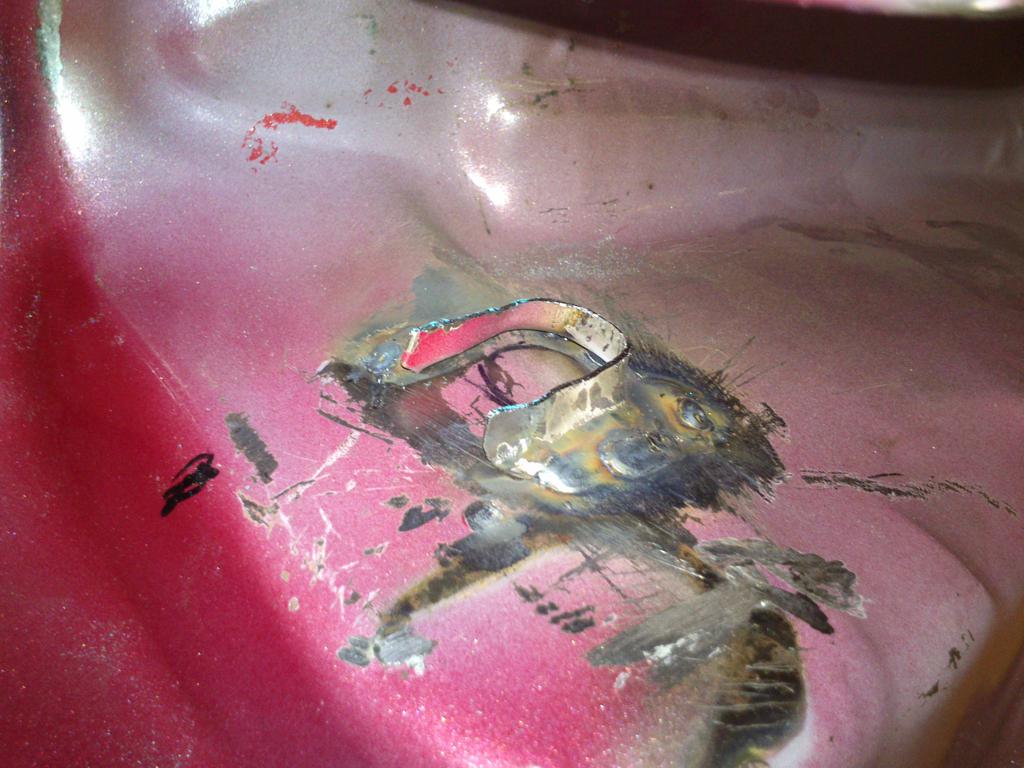 Trying on old seat base plate i already cut a bit. Looks like a beaver's tail. Im going to use it rather than make a new one at first, we'll see how it turns out but it's quite promising. 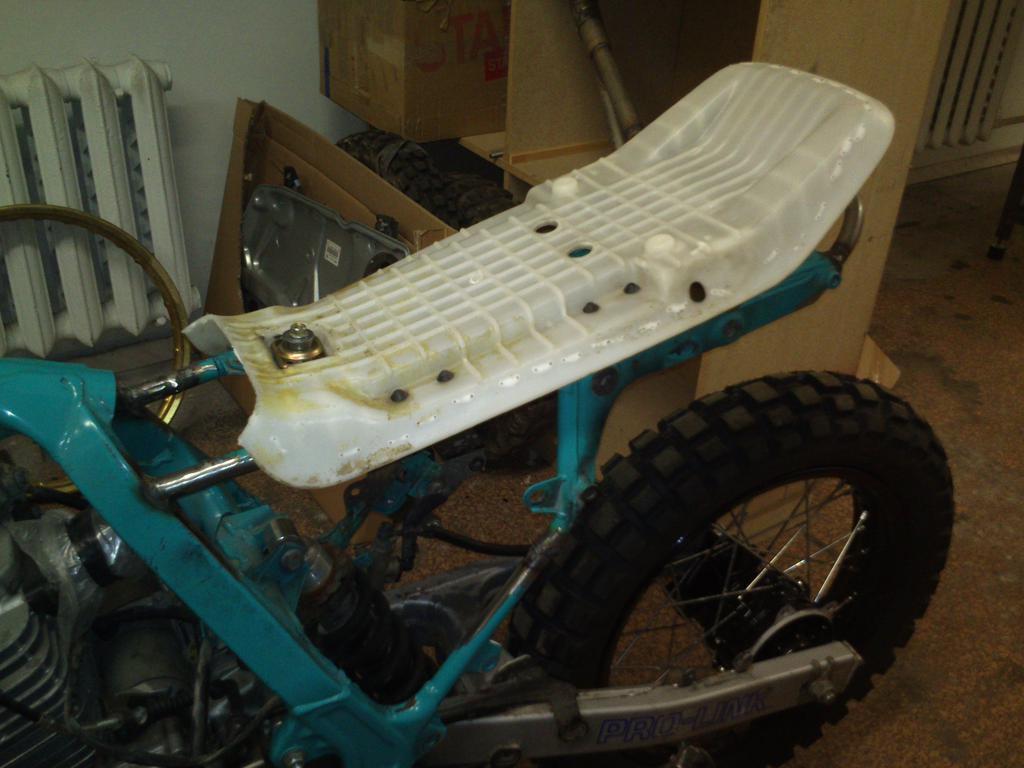 Front end of the modified seat plate fits like a glove, in the original bracket which is great. Will figure out the rear end too, maybe i'll use aluminium sheet and rivets. It goes upwards from the rear with a step and since i sawed the sides off, its not that tough. 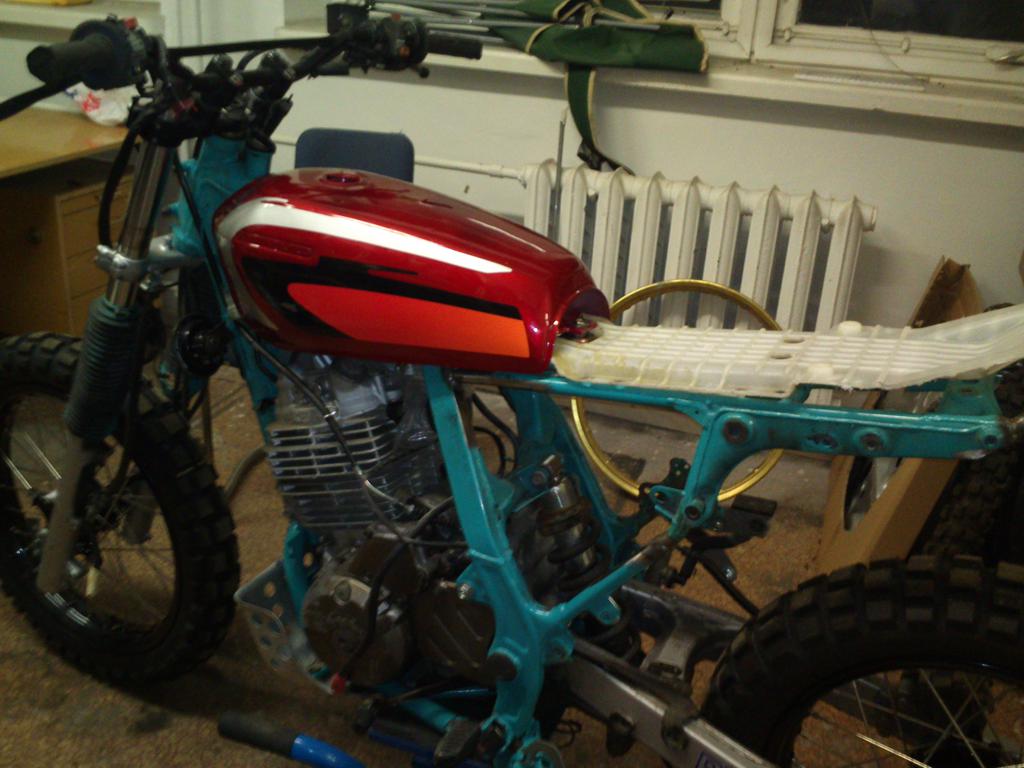 looking good! I wish I could find a xs650 around here to do something with...

Thanks! But win some, lose some. In my country, a former part of soviet union, we have very few models released up until the IInd half of 80s or they're really rarely for sale or in total crap condition. If i wanted to buy for example Yamaha R5/RD350 or Suzuki T350 or something similarly cool - no chance. The reason for this is that during soviet times cars were rarely sold to common people so motorcycles were widely spread, even during winter times - Jawa and IZH mainly, also 4-stroke boxers like M etc, soviet production. And when we gained independence in the beginning of 90s, everybody could easily buy cars and they forgot all about motorcycles. Until in the beginning of approximately the 00s it became a cool hobby again. But then they started to import ugly cruisers and sportbikes from the 90s and newer, so no cool bikes here. You can find some but really seldom, old bikes are not very popular here. In Finland, 80 km from us, its a different story. So if i want to buy something again, then ill go there probably.

80km is a small trip . Being in western canada anytime I find a neat bike it seems to be 300-1200km away hahaha

Not as easy as it sounds because 80km is only a ride on a ferry to get to Finland but its a big country. Still, we can always order something from Germany to our door, costs like 300-400 euros (more expensive than a trip to Finland which is like 100-200 eur) plus 200 euros for registrering. Either way, sucks to be a motorcycle enthusiast here and also in Western Canada, but hey, there's always chess ;D

Back to Domy. Up next:

Yeah I guess you either deal with it or find a different hobby! Hahaha

This one is cool as hell 8)
What model Leo vince are you using?
Great job mr!
T

Hey Tort, dont want to rain on your parade.. but the headers are not going to work i guess. The pipes have a different wall thickness and overall diameter.
The thick pipes will create more kinetic energy then the thin wall pipes and i know for 90% sure the welds will break where thin and thick are connected.
Especially since its a thumper a lot of energy will go into the headers.

Thanks a lot for discussing! You can always rain on my parade ;D I see your point BUT! Its not a cosmetic weld on the surface, its welded through the material, should be tough as diamond. Also, both pipe types are thicker than original.

And about your kinetic energy theory... The basic kinetic energy formula contains weight, not measurements. So basically, if it were true and had to be considered here, its not about the measurements of the pipes, but the weight of the different pieces. I dont believe all decent headers are made from pieces which are the same weight.

And here's the same thing with a bit welding and grinding done (a bad pic due to flash but no holes anymore): 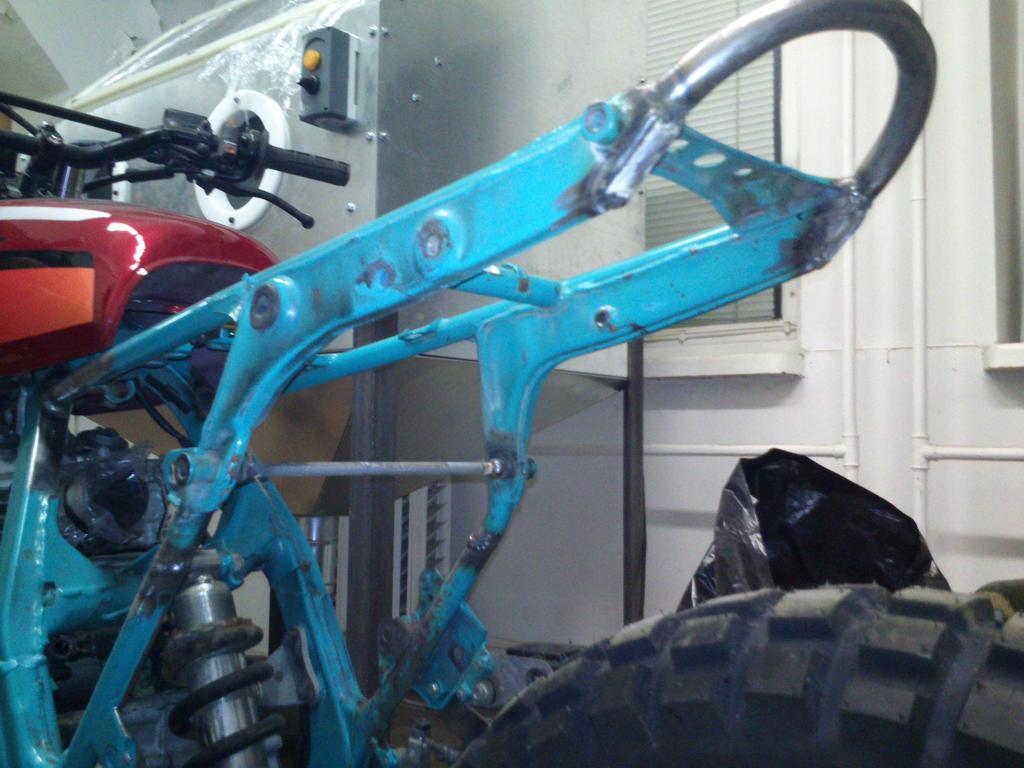 You can also notice the small bar added to support the front end of rear fender. Did a bit of cutting on an old soviet bike's rear fender and got myself a rear and a front one both. I was thinking about going short MX style rear fender with led-stripe rear taillight, but the soviet one has a cool spot for a light on the top rear end so this is ideal for retro style fender-light. A bit longer, just below the cross-bar rear fender is also more practical, because it protects the KN pod a bit.

Cut in half, its was a huge one: 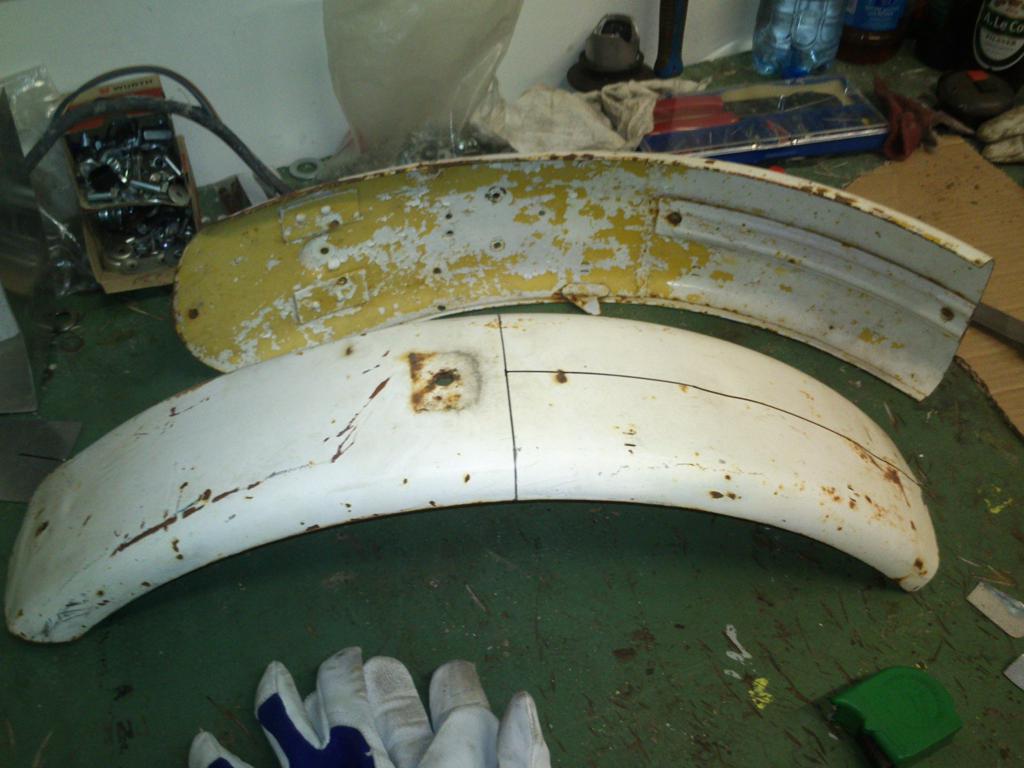 Front one in progress: 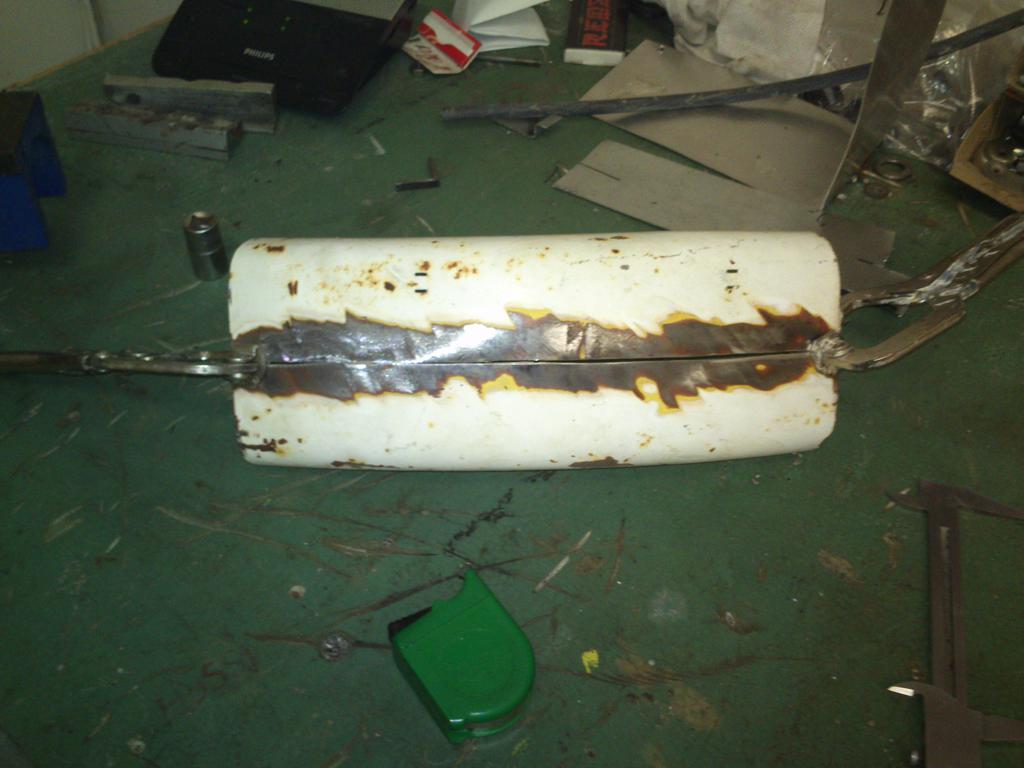 Thought of riveting old original front attachment to new seat pan but the rivets were not long enough so i welded this ultra-beautiful thing from a steel bar and a washer. Its even better solution because i got the thank to be as high as i want, with exact perfect space between the tank and frame. 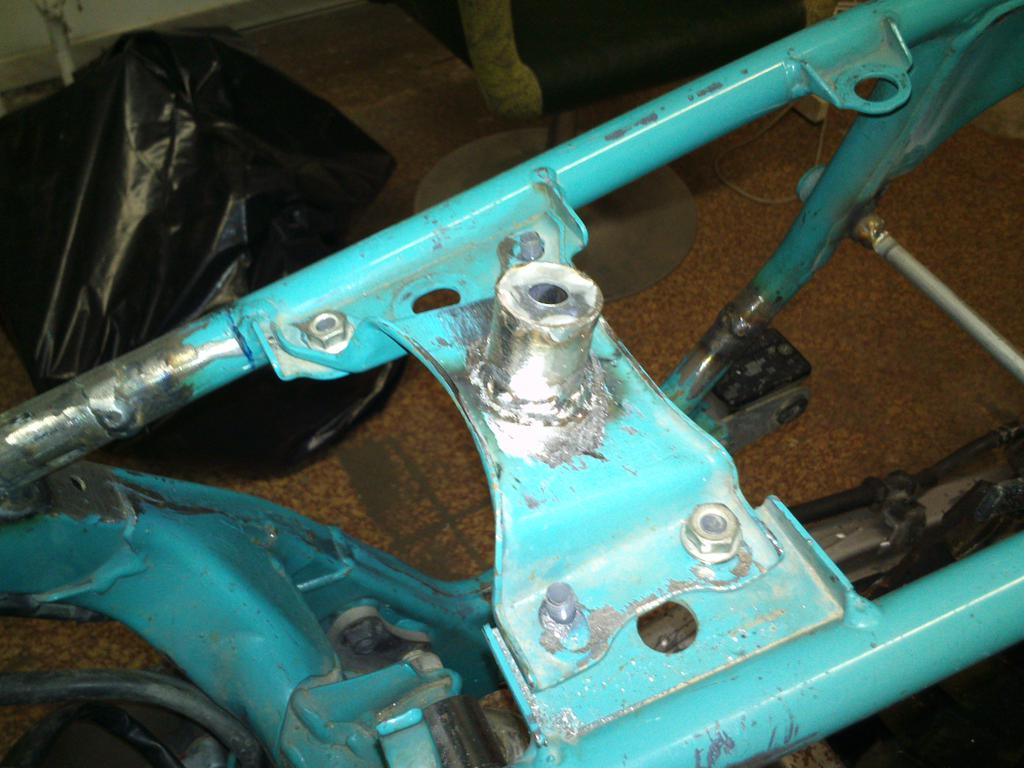 The seat pan is mostly ready, needs some grinding from sides but it fits great. There's a higher cross-bar in the back of the original subframe, which i didnt want to cut so instead i cut and re-welded the pan. The rear end is actually lower since the bike is on a stand. Also attached temporarily the rear fender for testing. Needs a lot of work though and its going to be just a bit shorter. 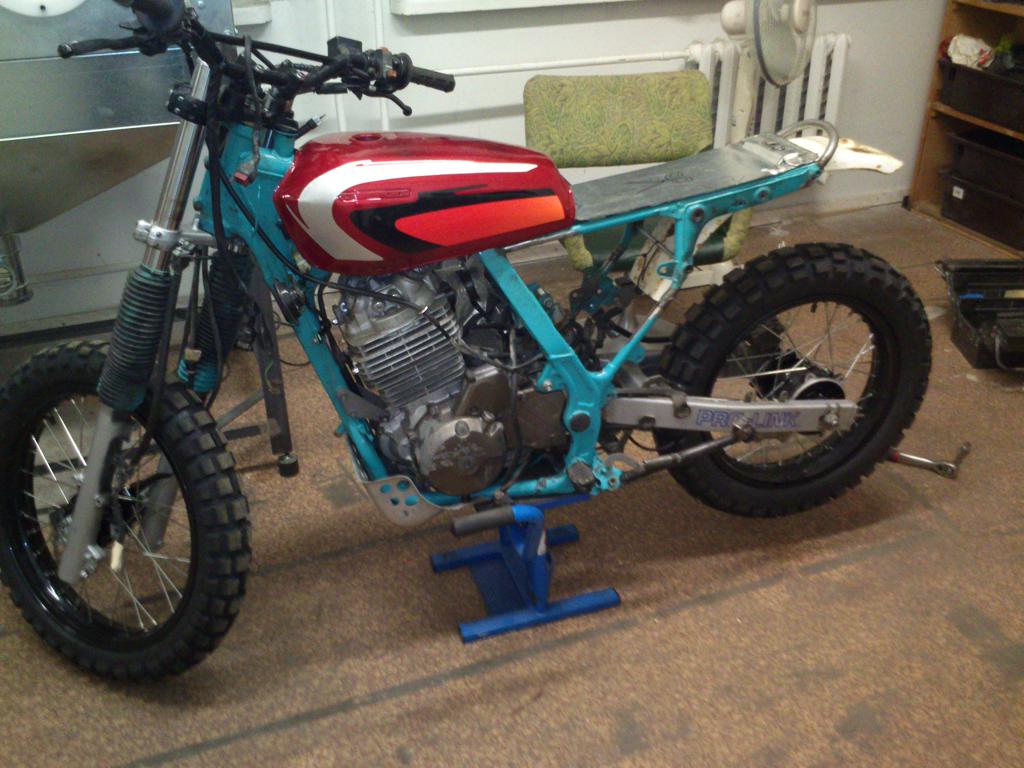 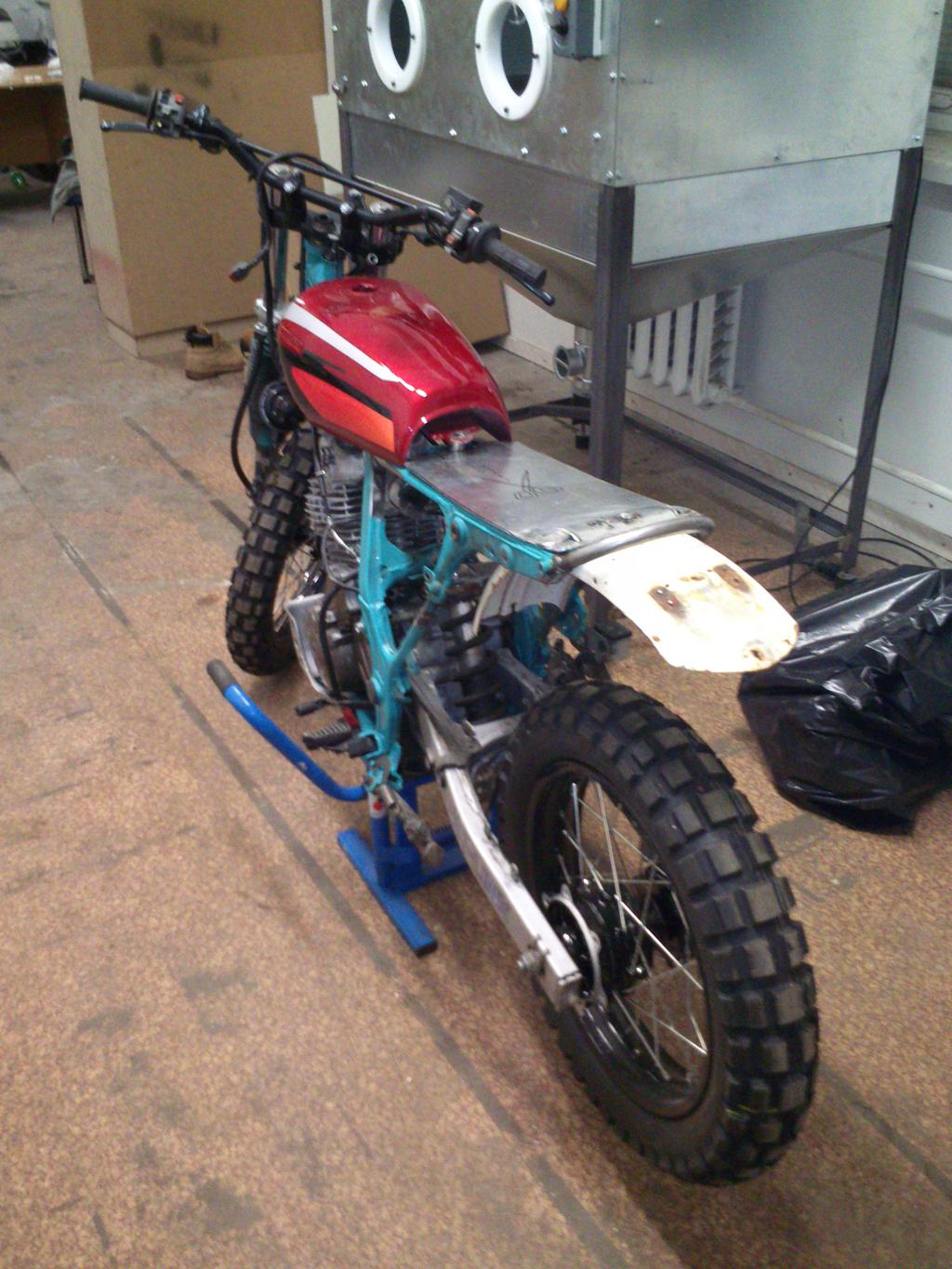 yo dude! nice work so far, tank looks cool!
question though.. cant find the offset for the rear rim. Can you measure the distance between the rim and swinger on chain side and non chain side? and how did you manage to get the rim alligned?