Well, i decided a few weeks ago to take on a relatively ambitious project that started with the aquisition of a free Ducati 999 rear shock. Here are the results so far.
First things first. Where to put the shock. Initially I had it going straight through the swingarm, mounting underneath: 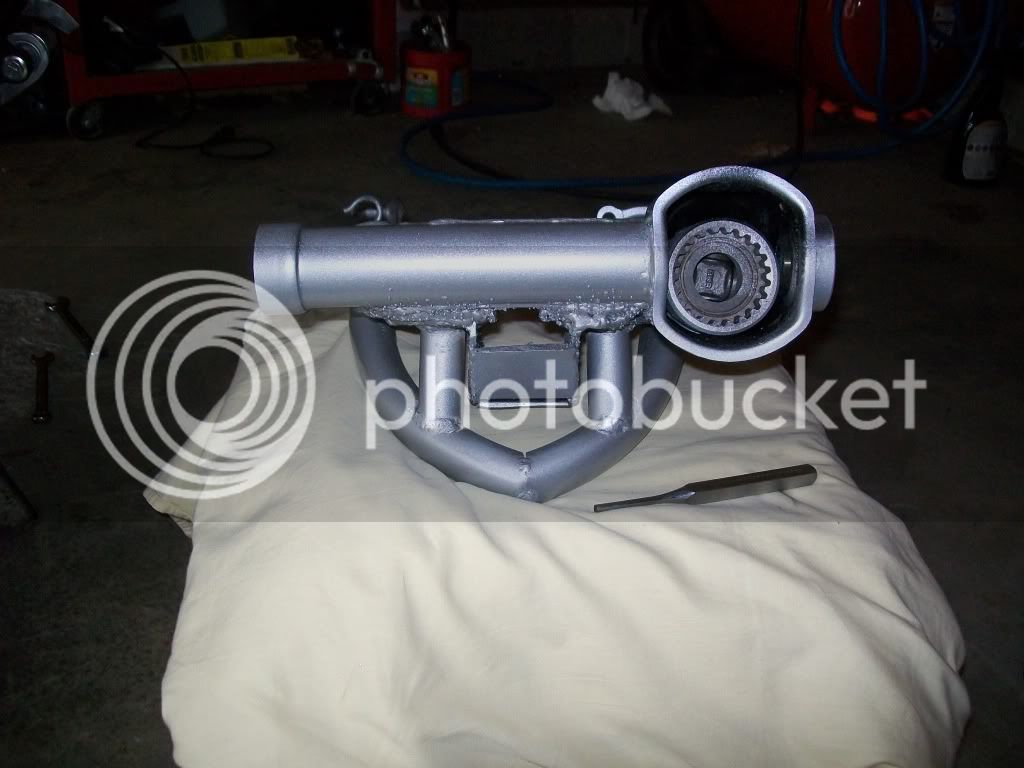 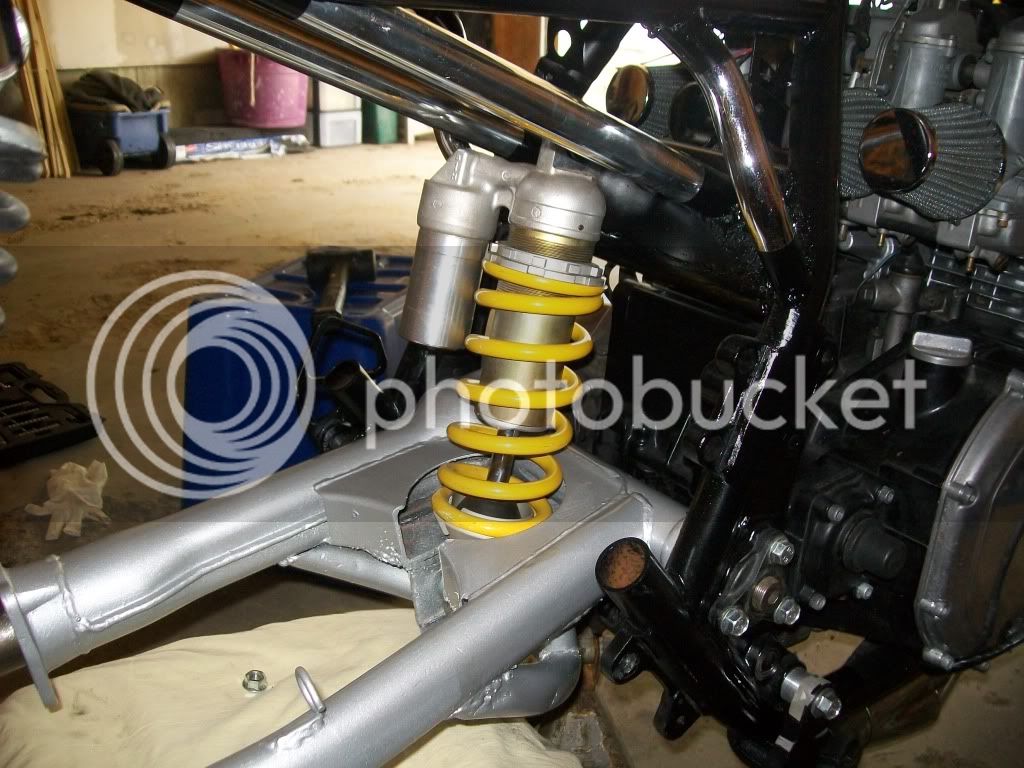 This did not work out so well, as the geometry was all wrong. Bike basically sank to the ground when I took it off of the jackstands. Guess thats why modern sportbikes have linkage down there, so, I decided to go with the shock at a 45 degree angle mounted to the top of the swingarm, sorry, no upclose pics of this yet 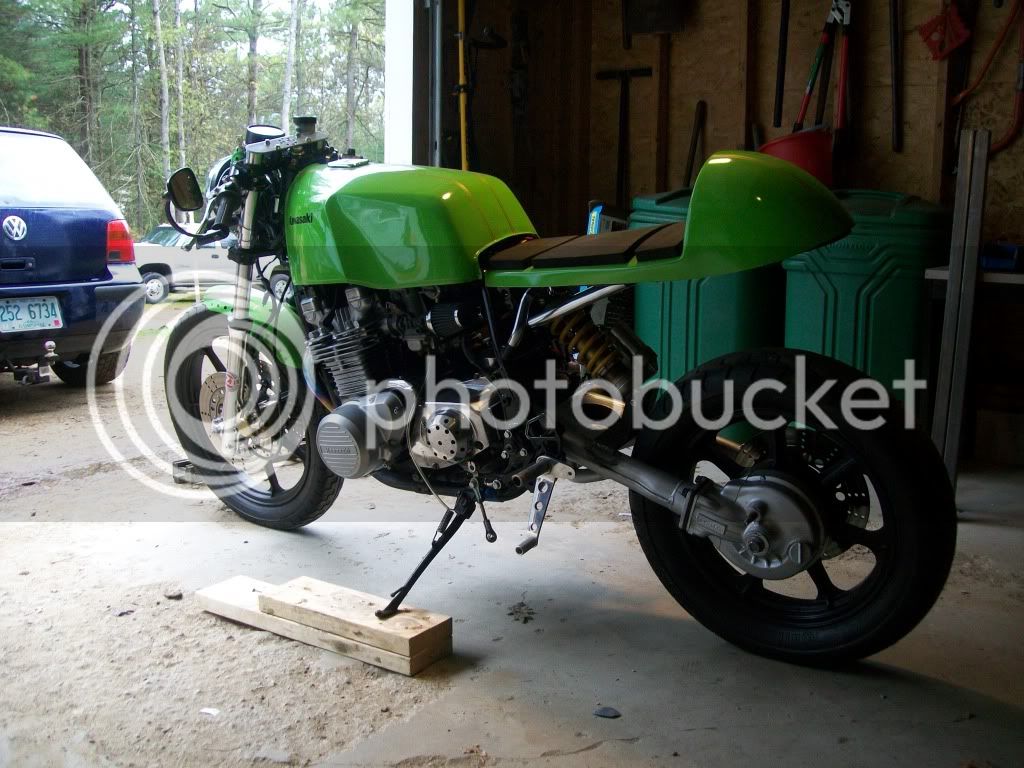 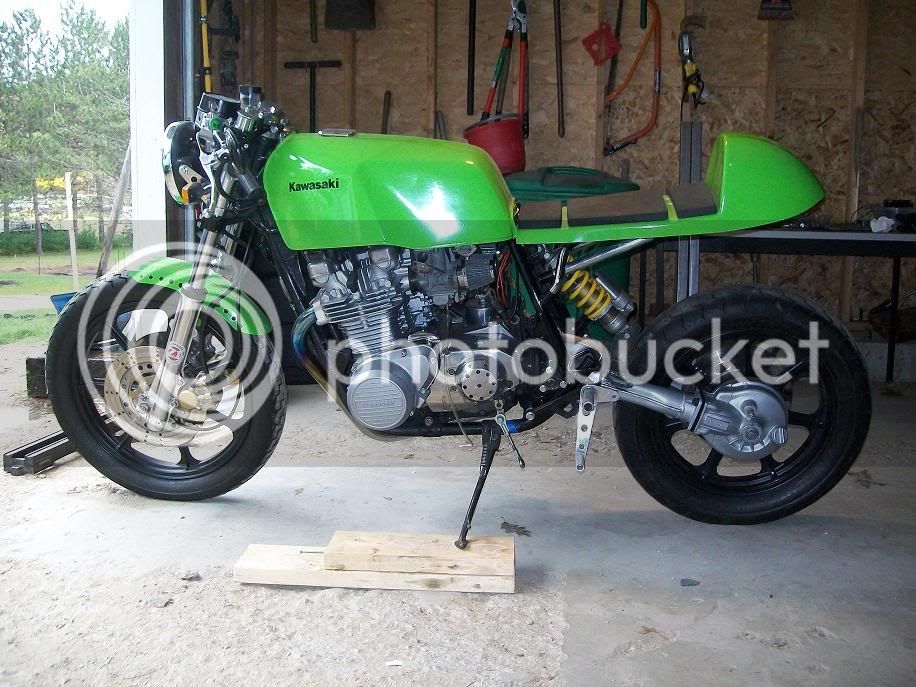 Results much better this time, it actually works, although it is a bit mushy, even when the preload on the spring is set at its highest. When i sit on the bike, it drops back down to stock ride height, give or take an inch on the high side, which is what i was looking for.
Next the rails going from the upper old shock mounts down to swingarm mounting points had to go, so I cut them off, then beefed up the frame under the seat to support my weight 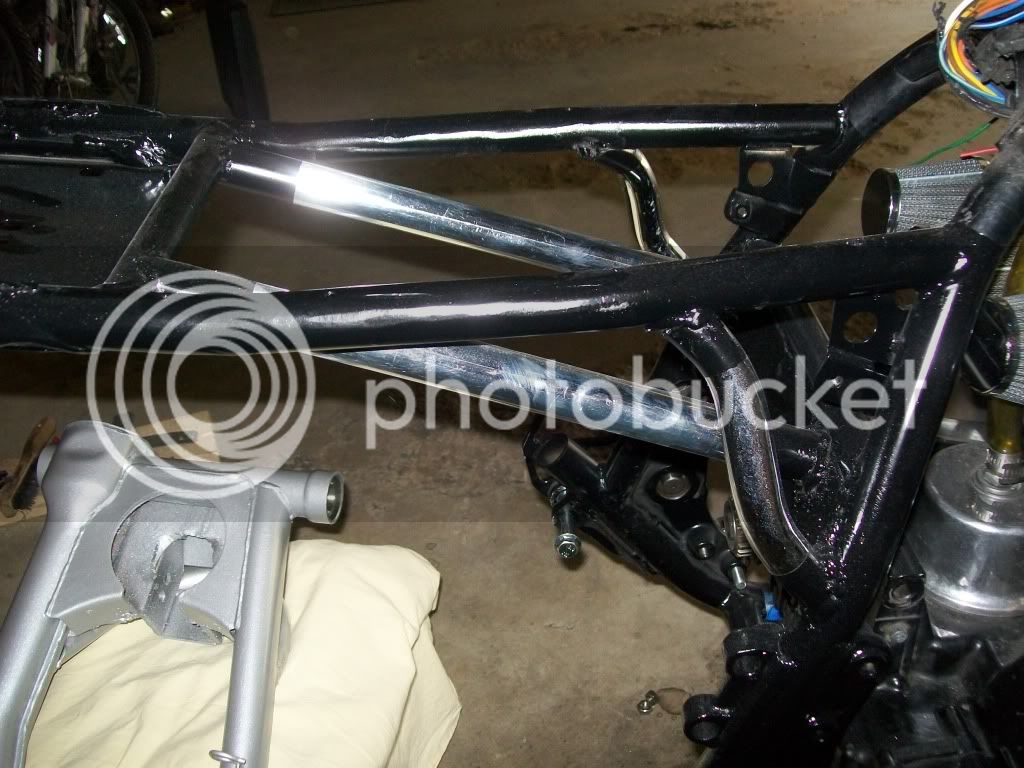 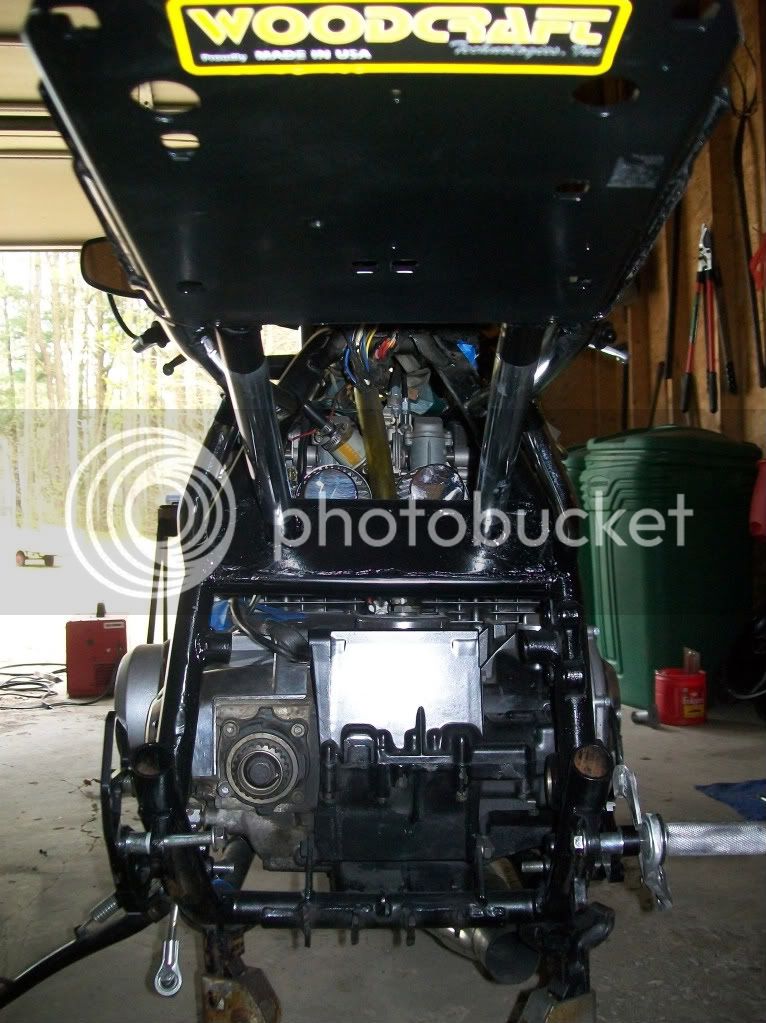 As you can kinda see, the 2 chrome tubes go from a cross supports between the seat rails to the uper shock mounting plate I fabbeb up between the down tubes behind the motor 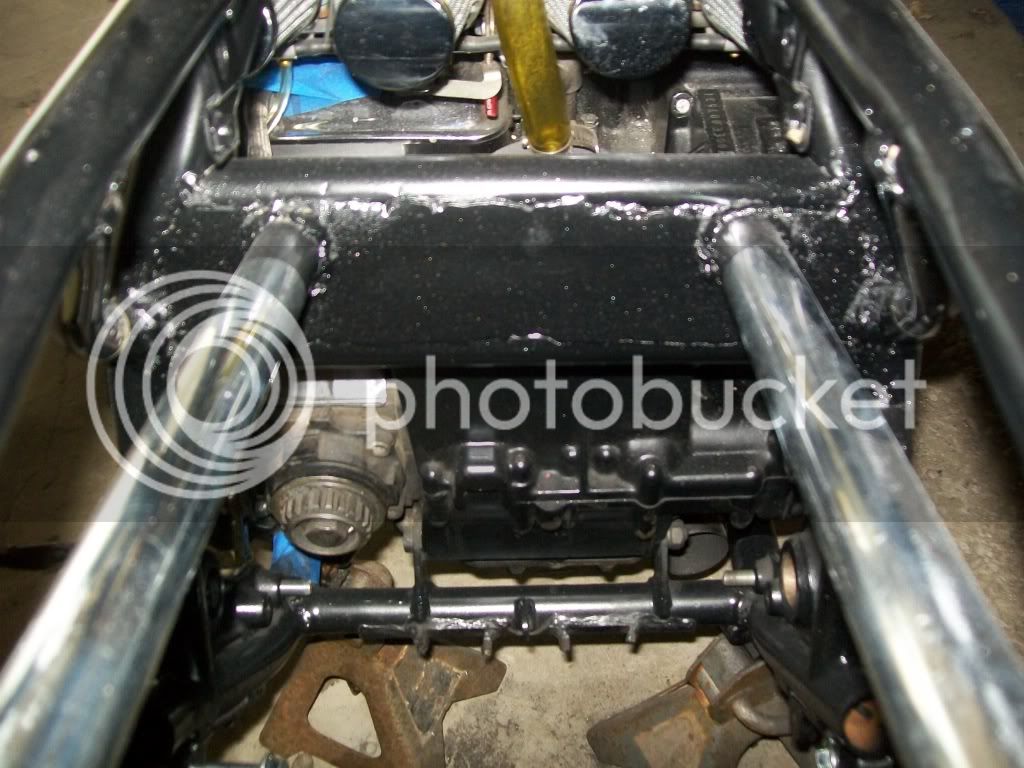 Also popped on a Superhawk front master cylinder and brake lever. The stock one interfered a bit with the clip ons 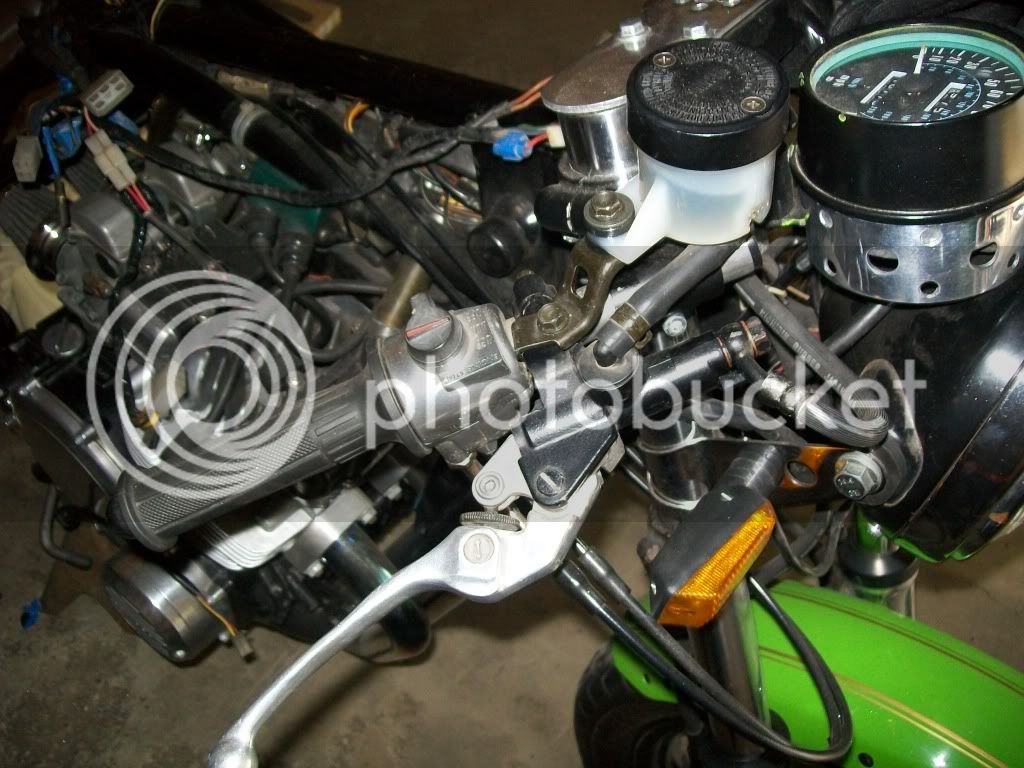 Thas it for now. I am going to finish up the swingarm with some additional bracing tomorrow, and finish the upper shock mount as well. then it will be on to re-routing the wiring, as it and the battery will all be under the seat hump now, instead of under the seat. The plywood seatmount will be gone too, as i laid an additional 6 layers of fiberglass to beef up the seat, which will easily hold my weight without flexing. More pisc to come this weekend, hopefully of a nearly finished project
K

First off .. nice bike. Looks like you did a good job. BUT! I sense trouble with your set up! "Mushy" is not good. You say the bike sits down closer to stock ride height. What happens when you hit a section in the road that unloads your suspension, such as after you hit a g out? Even worse coming into a corner? The sudden, and drastic change in your geometry, along with the mushy suspension will cause you to crash. Also the angle of your driveshaft will cause excessive wear in your drive system. If you want to keep your current set up, which will be very hard to set up, you NEED to limit the unloaded extension of the swingarm somehow. Using the shock to stop suspension travel will break the shock internally. Maybe think about a rubber limiter strap such as what is used on snowmobiles, or look into a linkage system which is the proper way. KTM has used a linkless rear suspension on their bikes for years, and were never quite able to get it right, as the suspension settings always seemed to be a compromise. KTM has now gone to a linkage set up.

It does have a certain amount of "sag", but once I sit on the bike, it stiffens up nicely. As far as the drive shaft angle, it is only extreme when there is no weight on the bike. It levels out once the bike has weight on it. I am going to source a higher rate spring to take care of the mushiness.
It will be a very slow first ride to work out the kinks, well see what happens
K

they are are many road conditions which will un-weight your rear suspension, and cause you trouble. Throwing a stiffer spring at it will probably worsen the results.
R

"Long after I rest, my steel will live on"

do more research on the mono conversion... LOTS of math and thinking must go into it... and even then, you may find it doesnt work right. do it right or bad things will happen (as killerdwarf mentioned).

Went ahead and solved the problem. Remounted shock at an angle closer to horizontal. No more mushiness. I have about 1 inch of static sag, and maybe another inch once I sit on the bike, from there out suspension is nice and firm with no bounciness at all, and feels great. third try is a charm. No w just to clean it up, add some more bracing and make it look nice. 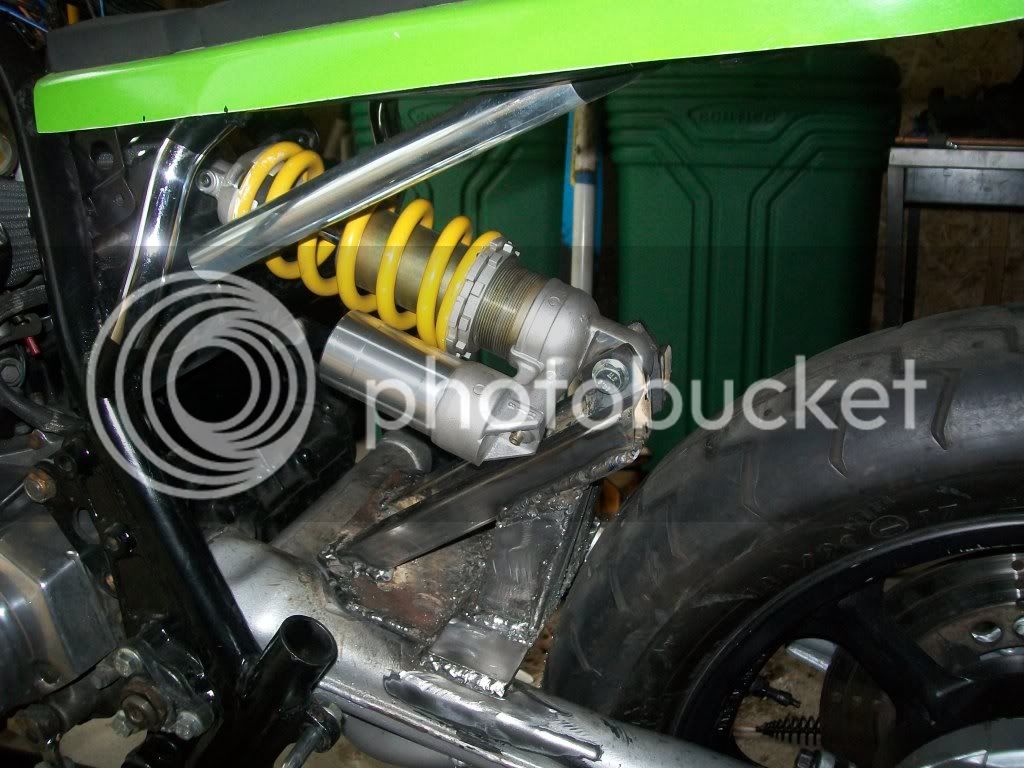 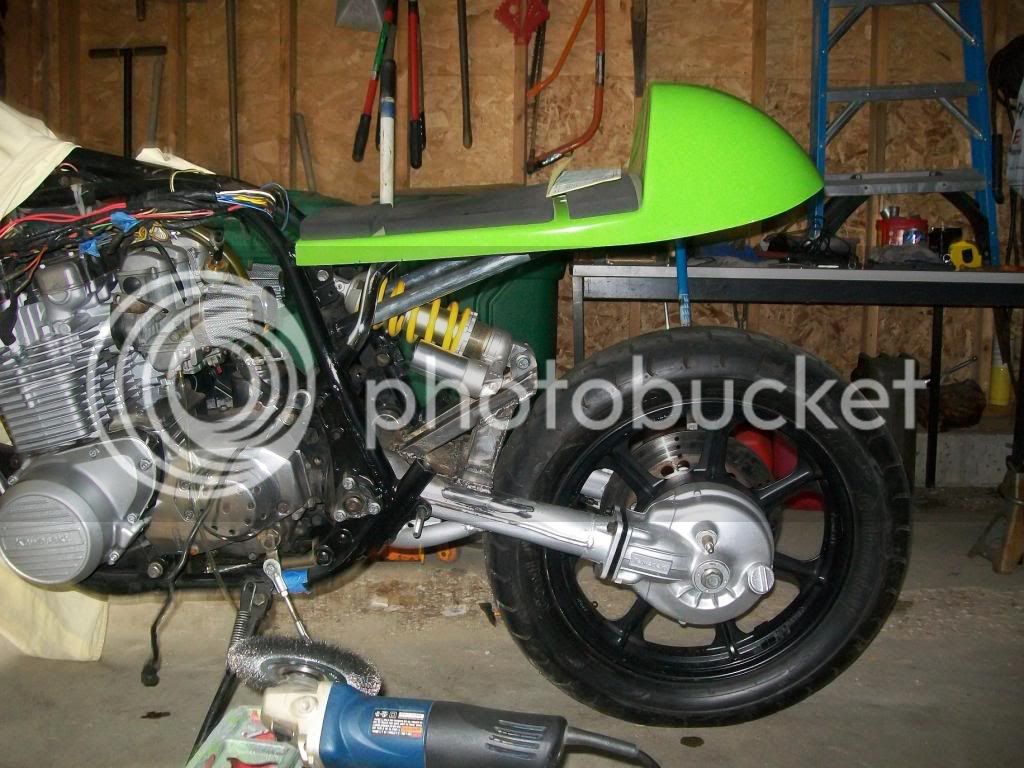 Nice! I've always loved your bike, but this takes it to a whole nudda level of awesome!

Nice, hopefully this works out. because of the way that you have the shock fabed up, you might think of putting a hugger rear fender to help draw the attention away from the shock mount and make everything look a little more factory.

I definitely plan on cleaning up the shock mount. there is no way i would leave it as is, its hideous

Ya, i think you could actually make that flow well with a small hugger fender that extended just past the shock mount, Kinda like what comes on the 636's.

Just what I plan to do. My nextdoor neightbor actually has three metal rear fenders off of some sort of Harley sitting in his backyard on a sawhorse. i think I may be able to acquire one for free if I ask nicely. then i will chop it up and weld it to the lower shock mount. Voila.
I am trying to get a piece of every major bike manufacturer onto this machine. So far we have Kawasaki, Honda, Yamaha, Ducati, and Harley Davidson. Just need something from a Suzuki, and I will be good to go. maybe then I will start adding stuff from some of the smaller manufacturers!

here is a very rough interpretation with MS Paint. You get the idea 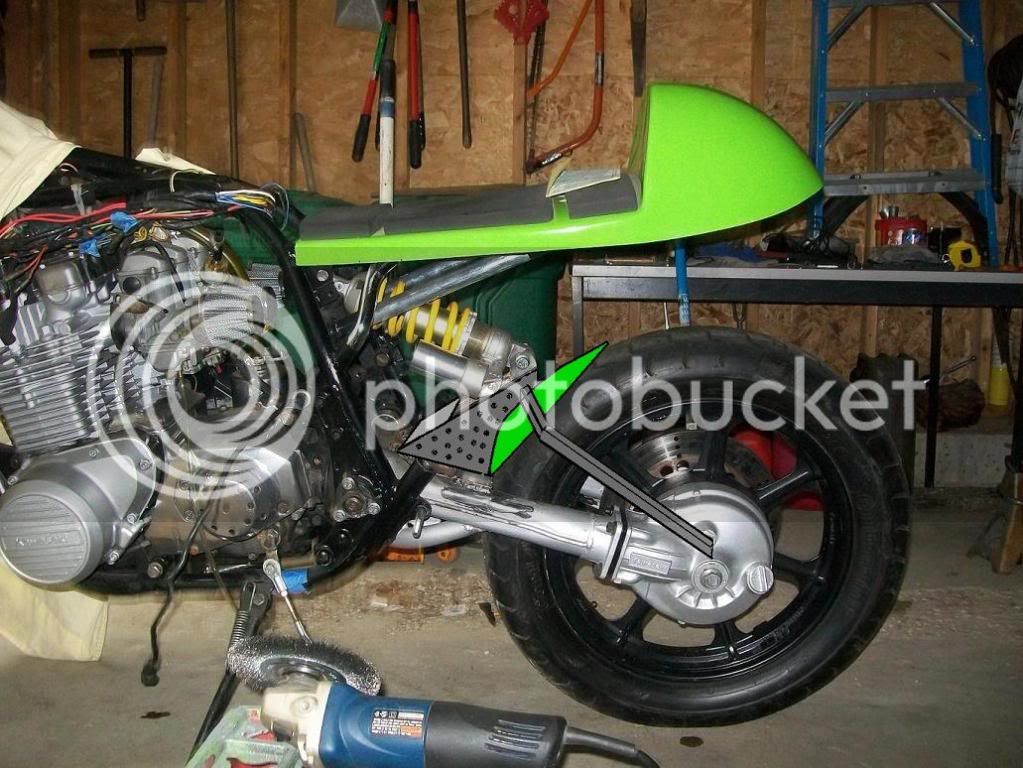 Looks good. I like the subframe. I hope the shock works out. Looks cool either way. Keep it up.

Did some more work on the swingarm this weekend. I don't want it to look "too" nice yet, before I am sure this is all going to work out as planned: 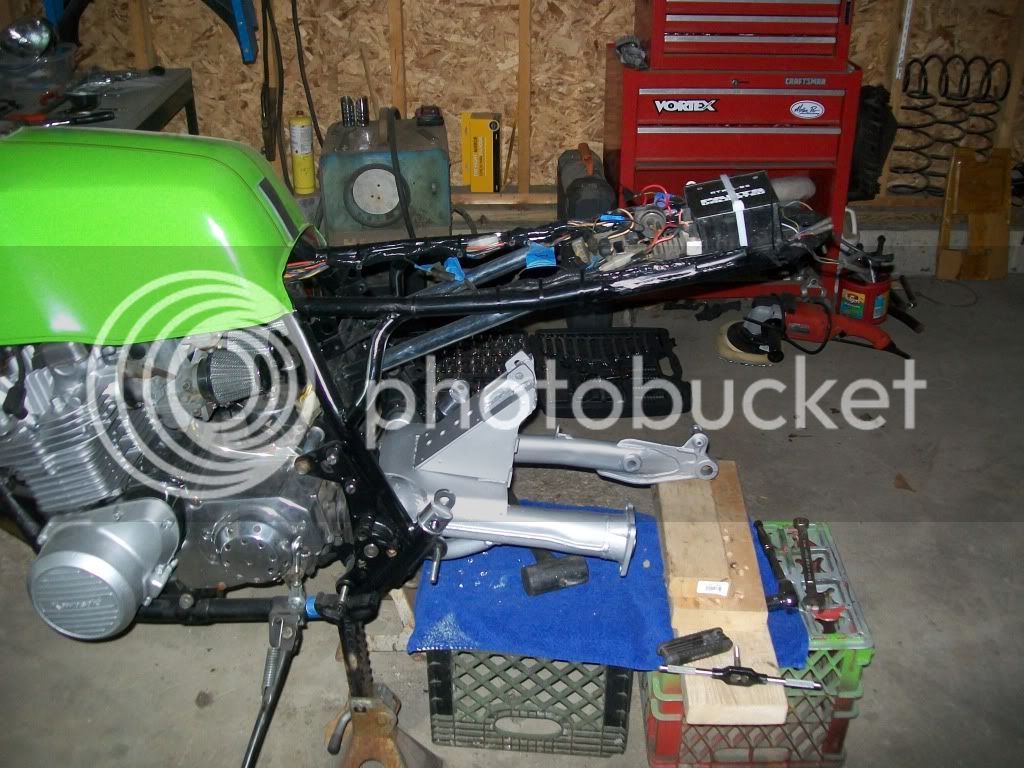 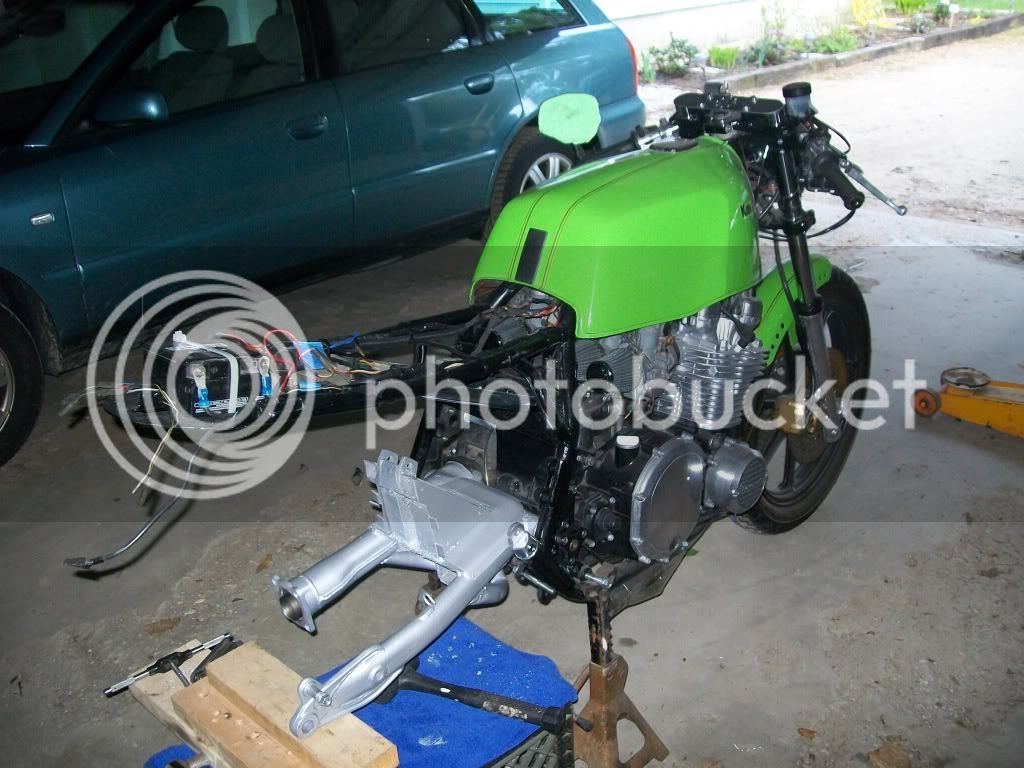