DTT BOTM WINNER
I lost this thread, I was looking for it in "members art". :-[
I backtracked through your build thread and found it again. The circlip should be made out of spring steel, that would make for an excellent cutting tool. I was a bit surprised at the re-heat treating, in the file to cutting tool page. I guess because I would just grind stuff to shape, instead of bending and filing. The hardness should be ideal as the file comes, but I could understand it if you needed to bend it to get the tool you need.
Different strokes.

I love the circlip chisels. By far my favorites, though the collection is growing. The reheating is new to me too, but seems to be the standard on all the engraving and carving forums. From a raw annealed steel sure, but it gets the job done well. It does make working the files easier.

In the meantime I'm working on the sculpting style via this tutorial.
http://www.engravingforum.com/showthread.php?t=3074

It started a a simple sketch, and then got fleshed in. Here is the basic concept. 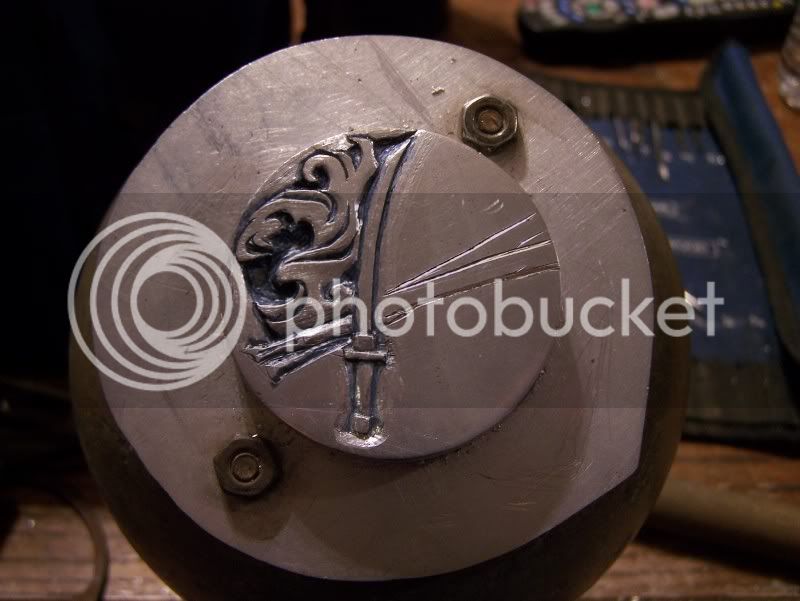 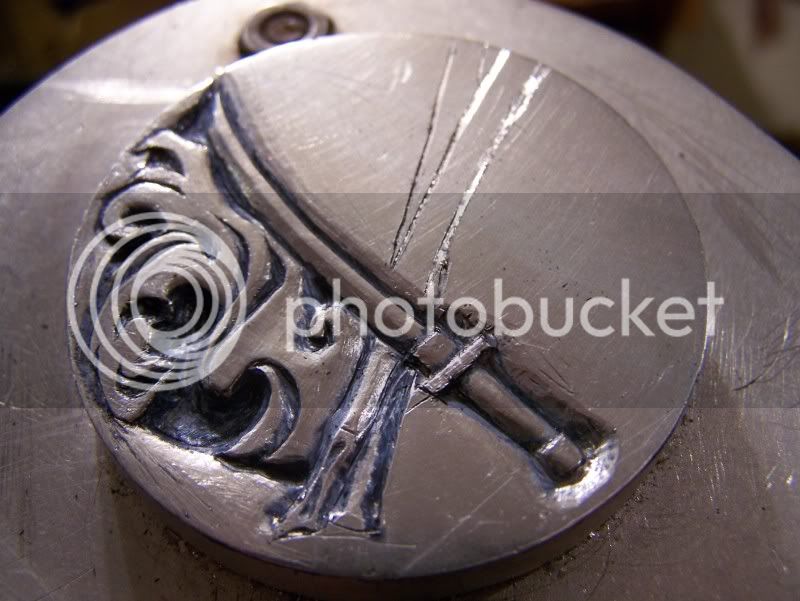 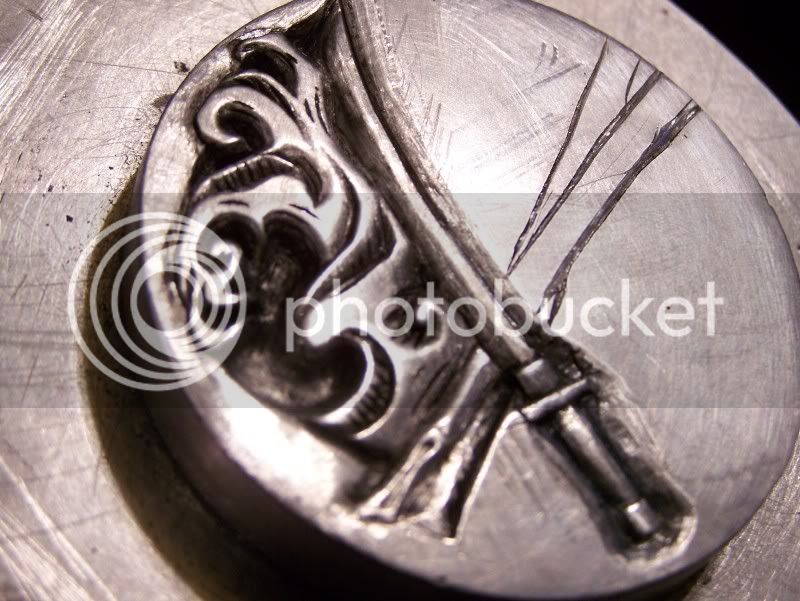 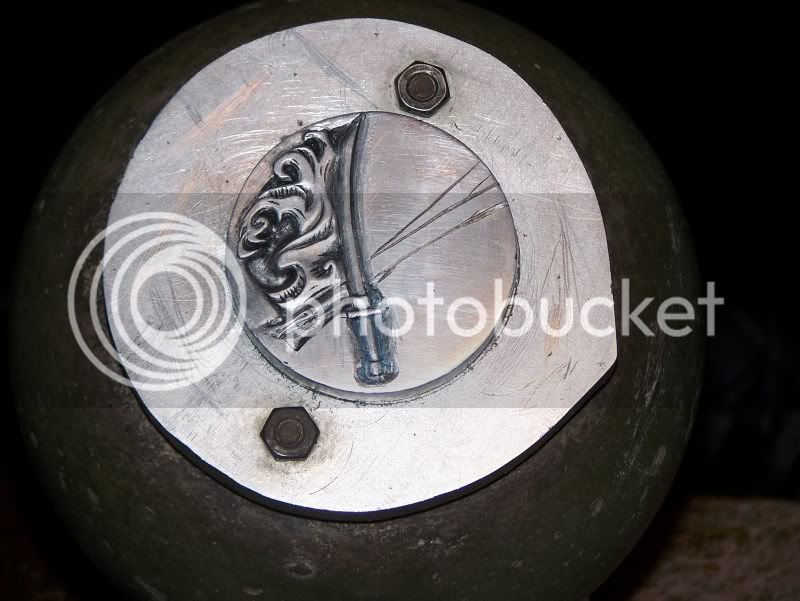 I didn't give a whole lot of thought to layout since it is a learning piece, so I don't really know where it is going. Progress is slow since I stop to make new tools every few minutes. Really the only effective tools on this project have been assorted rounds, flats, and a few new scrapers.

The last few tools were made from old steel spokes. They forge well, and hold an edge really well after being hardened and tempered.

After the majority of the shaping was done I made a couple of rounded blunt points that were polished to near mirror. They were 'turned' in the drill press, and shaped with an angle grinder. The next step was to polish from rough grit down to 2000 grit wet/dry.

The majority of the tooling marks were removed by 'burnishing' the curved surfaces. You take the polished blunt
and rub the surface of the work, alternating directions and going lighter on each pass to brighten the surface. The process is similar to polishing a surface with progressively finer sandpaper.

I really didn't have a process since this was the first attempt, but now that I have a path to follow I'll photograph and document the next half step by step. If you guys have any specific questions, ask now and I'll try to address them as I go.

Thats some intense skill, Idk if I would have the patience to even try that. I saw your build thread and that looks awesome.

Ok, starting on the opposite side now. The outlines lines were scratched in pretty light so I had to open them up and get the recessed bamboo to the approximate depth. I started with a simple flat chisel at a steep sideways angle and gouged out a deep line to keep the tool in place as the bamboo gets dug out. The flat side down is good for heavy removal, and if you flip it over it serves as a decent micro plane. 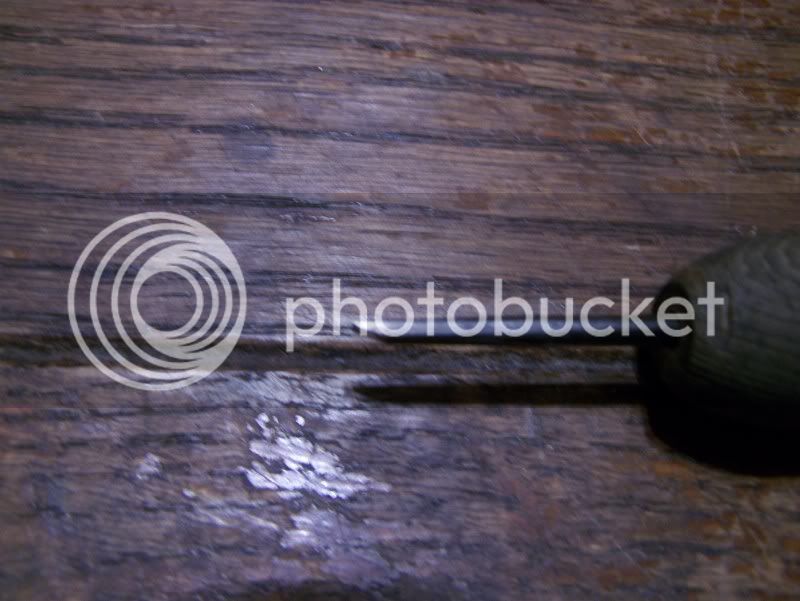 During the trenching the shapes were kept simple. The good news is the material comes off pretty quick especially when using a chasing hammer. For he time being my hammer is just a 2" x 3", 1/2" thick piece of scrap steel. It is actually pretty handy. The characteristics of the chisel movement can be adjusted depending on which face of the block I use to strike with. Once the lines are roughed in I took shallower passes and used less sideways angle to round the cylinder shape. After that I drove the chisel straight in to create the lines for the bamboo. 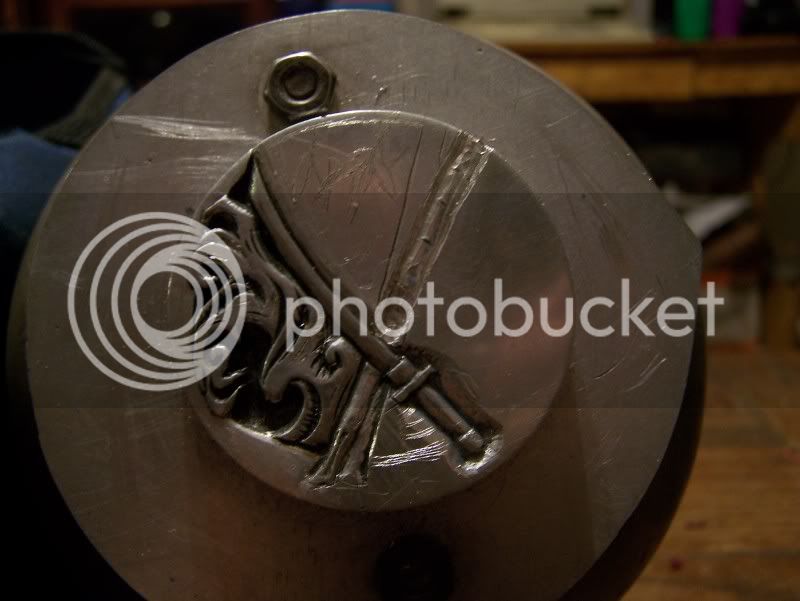 The next steps were a little more complex. I switched to rounds and scrapers to shape the indentions between the nodes. It is a pretty tedious process of angling, gouging, and scraping that I couldn't begin to put into words. 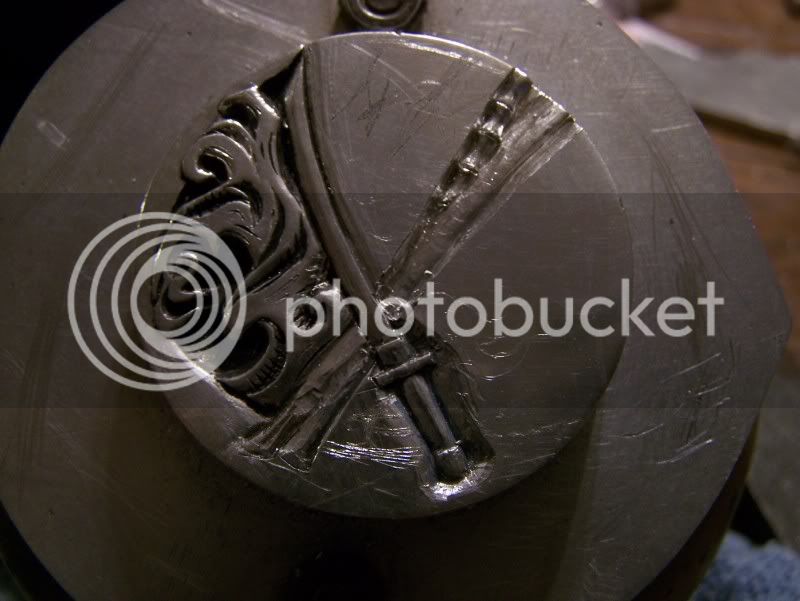 These did the bulk of the work. 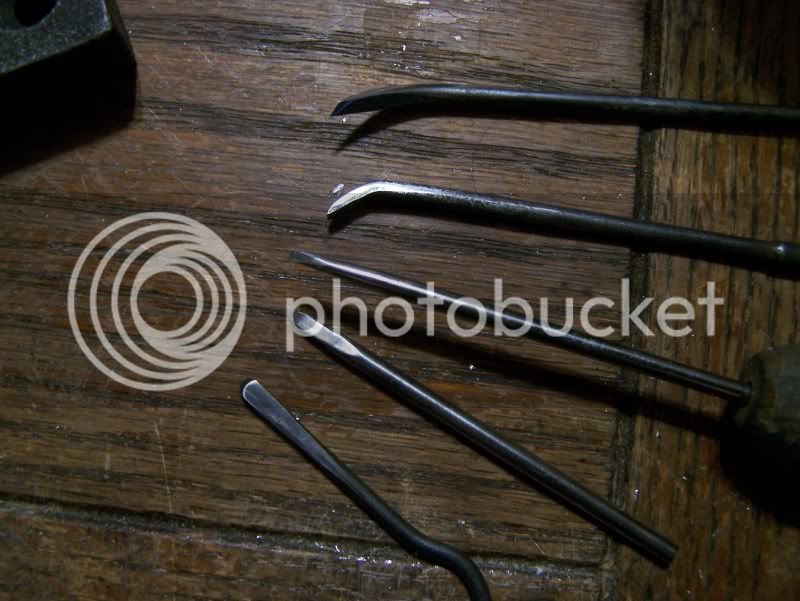 It was damn hard to get into the small spaces closer to the sword, so there was a lot of scratching withthe smallest rounds to remove the material.

After the shaping was nearing completion I went to work almost exclusively with rounds to lay in some detail, and hatch style shading. Still a long way to go, but I'm starting to see some composition. The next step is to sketch in the bamboo leaf motif in the blank area (if I can finally settle on it...). 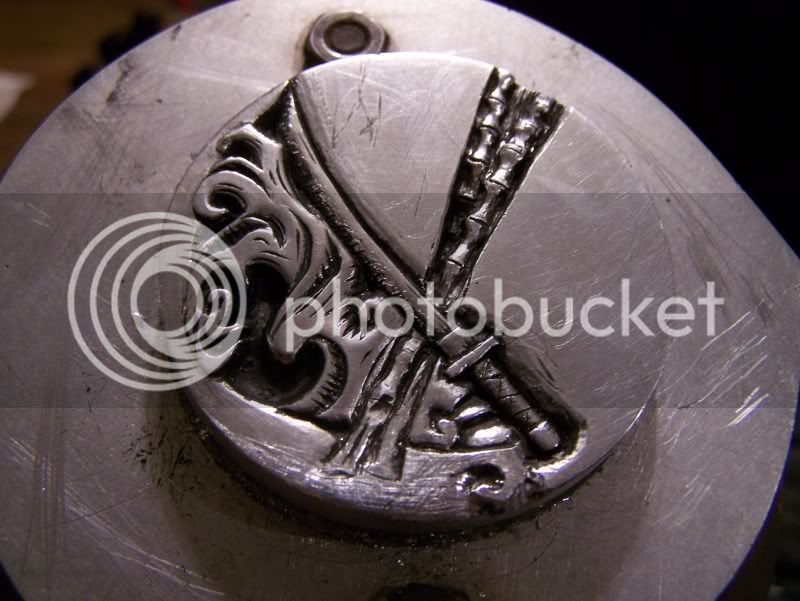 And 76/356, thanks for the kind words. This really isn't that hard once you tool up, but yes it does take a lot of patience to sit for hours chiseling a piece of scrap aluminum. If you tried it, I promise you'd be hooked though. I just turned on some Tom Waits and dug in. Very meditative.

man that's impressive. Wish I had the time to learn these skills. I'll just live vicarously through all of you fine folks.
Great writeup Crescent. Loving the details.

Sorry for the lack of recent updates, as the hoidays roll on I get busier and busier. I have done quite a bit more tooling up.

Most of the pieces in this picture, though handy, are not needed to do standard bright cut style engraving. Since I'm experiminting with deep sculpute engraving I end up making pretty much every style tool I can find an image or description of. 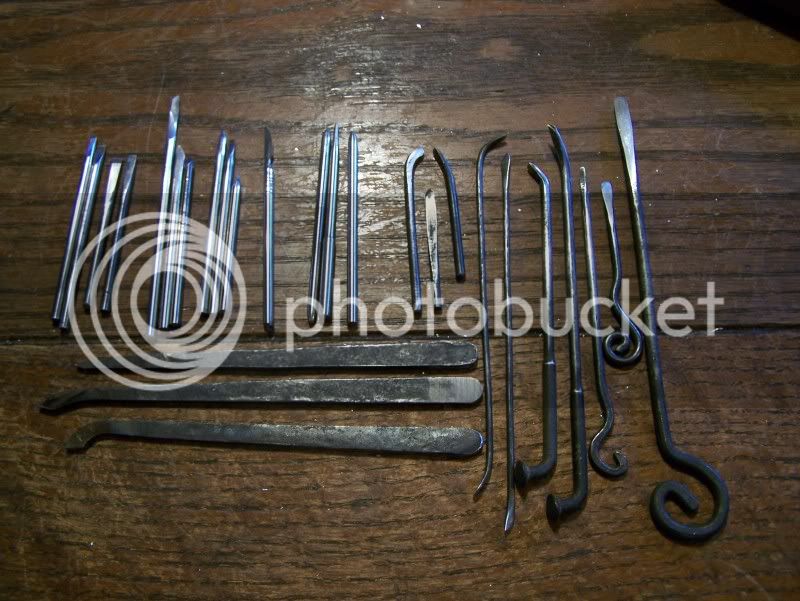 The handiest tools yet, are the most utilitarian and basic. I drilled a 3mm hole in a scrap of pine dowel for a graver handle, and I took the torch to the end ov a piece of PVC pipe and made a base for the concrete ball vise. I also made a small chasing hammer out of a 3" piece of rebar. I still need to snap a pic of that one. 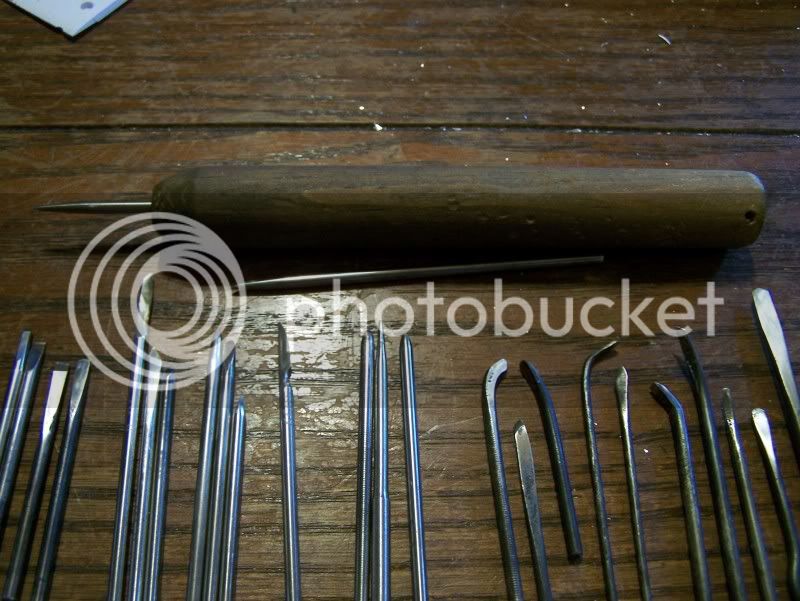 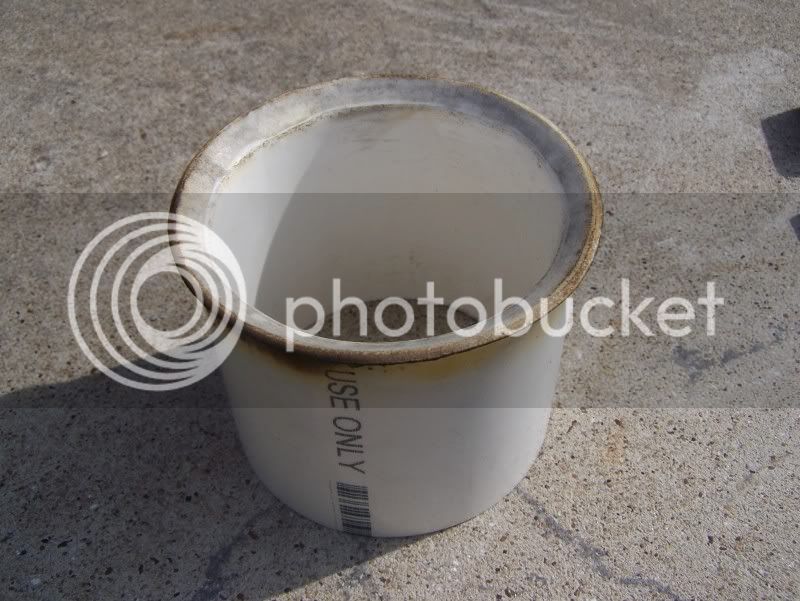 I'll post some progress on the piece in a bit. I work on it at least a few minutes everyday, but it has been progressing fairly steadily. 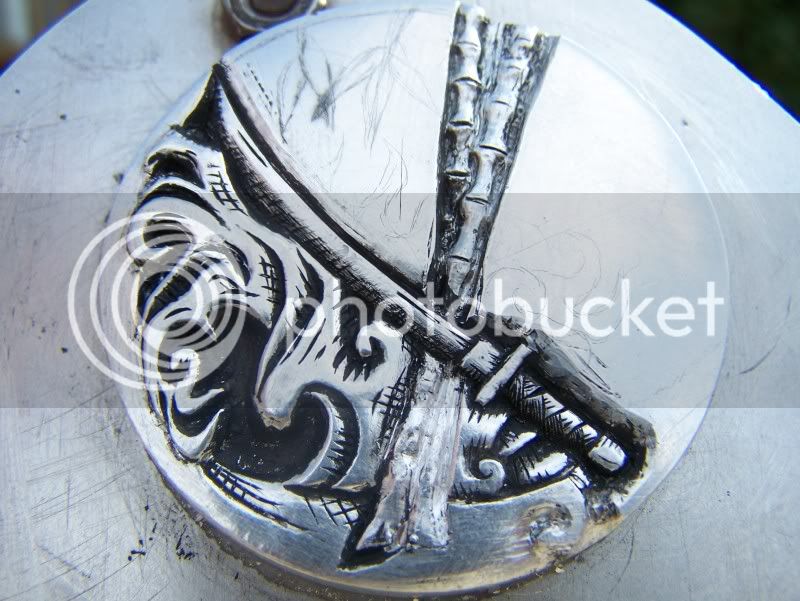 This shot is well over a week old, but I'll get some new stuff up tomorrow. I'm getting a lot more confident with the shading lines, and cross hatching. That is mostly due to this technique I picked up from followingtheironbrush.org. 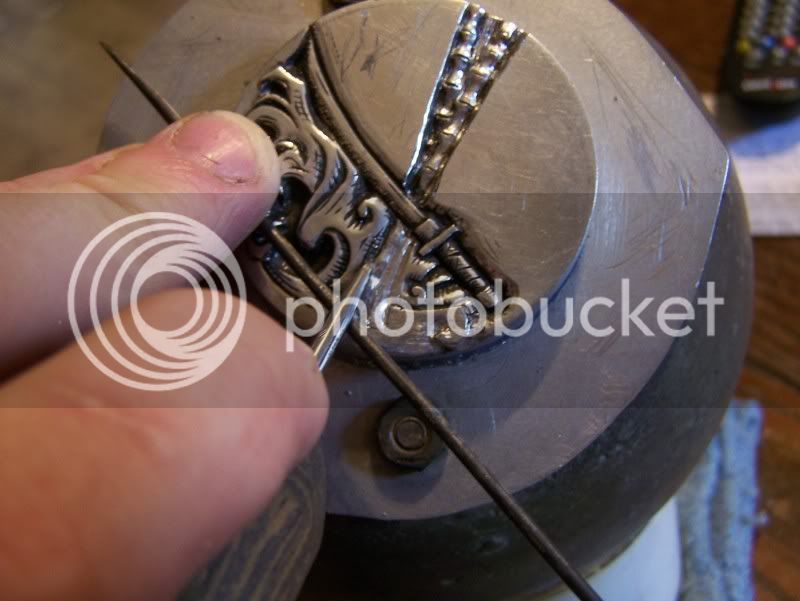 Using a small diameter wire chisel (made from a bed spring) as a fulcrum, you can control the depth and derection of a fine line. Once I practiced a bit, I got to the point that I could roll the fulcrum to get longer lines without picking up the chisel point.

I really cant wait to get this piece done so I can work on some bright cutting. This deep sculpting just doesn't have the realitively instant gratification of a more 2d approach.

Of note: be wary of heating PVC to the melting point indoors. It releases highly toxic fumes that'll do you in if you get too much in your lungs.

power graver is still coming but I haven't had any time to eff with it recently. I did get my chunk of tungsten for a good hammer.....

Thanks Lee, I meant to mention the evils of overheating PVC. Its all good on the graver too. I'm having plenty of fun with the hammer and chisel while I'm learning the basics.

Here is where it sits today: 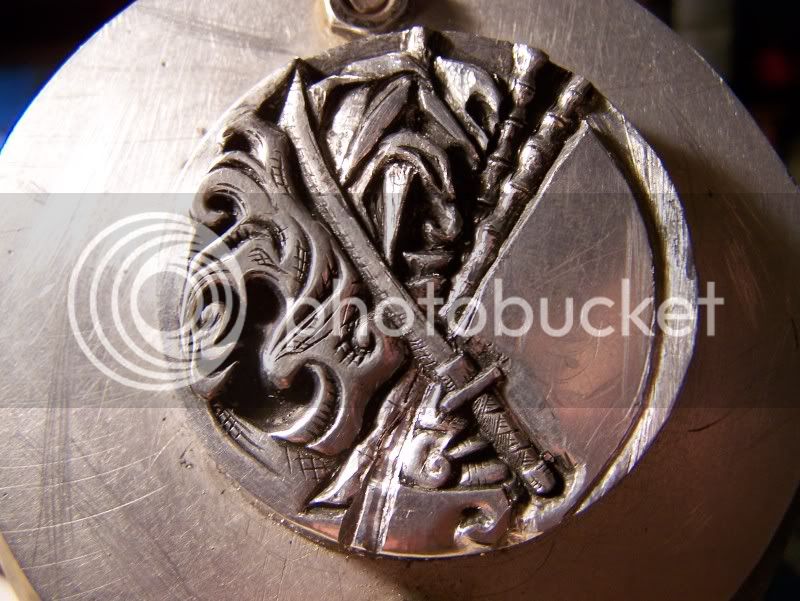 It is kind of hard to see it, but it will be some bamboo leaves mixed in with 'wave' thingies. I'm still unsure of the overall design, and the fate of that last blank section. We'll have to find out together later. I worked nights last night, and only had a couple hour nap today. I'm off to bed gents.

I know its not even close to the same thing, but do you have any info on acid etching? For the clutch cover on my XJ build, I'm thinking of laying down a resist layer (plasti-dip) and burning away the image (used for my avatar, but much higher res) with a cnc laser cutter, then acid etching, painting, and pealing away the resist. Most of the info I've found is relevant to use on electronics control panels, not cast engine parts, and nothing covers laser cutting the mask, so will be doing experimental pieces first, of course.

Cheating, I know. Got loads of respect for the real stuff, have always loved how it looks (ever since seeing medieval armor in museums as a kid). But when the world gives yah laser cutters, you make laser cut filagree (on flat surfaces). Figured you might have come across something more directly applicable in researching the traditional techniques.
You must log in or register to reply here.
Share:
Facebook Twitter Reddit Pinterest Tumblr WhatsApp Email Share Link