Well, I picked this XL75 up a few weeks ago and finally got it running. The carb was so clogged I put an xr100 carb on. Coil was a "universal" 6v/12v thing that must not have liked the AC supplied to it, so with a proper coil spark was much better, new points and it has a bright blue spark now.

Mechanically it was definitely attacked by someone who shouldn't work on vehicles. Swingarm pivot bolt was a too small carriage bolt, so at the axle it had probably 1 1/2 -2" of side to side play. Rockers probably hadn't let a valve shut fully in years. Brakes obviously stuck. Enough mud around the countershaft that the chain was stuck.

So now that it runs I know the jetting is off, it bogs bad if you try to rev it fast. It burns enough oil that it's probably not helping things. So eventual plan is an xr100 motor taken out to 120cc with a cam. Currently I'm going to fix up the original motor and maybe use it for a different project later.

Chassis wise I already swapped on a XL100s swingarm, it's longer with shock mounts in the stock location. I want to lay the shocks down, probably make my own parts for that. Needs new seat foam. And it will need all new lights if I ever want it on the road again.

I think I figured out the smoke. The cylinder is from a 77/78 xr75 and has a 48mm bore, which varies from 48.02 to 48.06mm, the piston measures from 47.8 to 47.6. So both are at or beyond the wear spec, but the piston is a 1.0mm oversize for an xl75. Simplest fix is a .5mm over piston for an xr75. Plus the bore looks pretty rough, like the piston was thrown in with no honing. Probably a backyard mechanic looking at it going this is a 48mm piston, this cylinder is 48mm stock, it'll work perfect!

Honed the cylinder up to size for the 48.5mm piston and started assembly. Valves were lapped, valve seal replaced, and lip removed from the intake port. Tomorrow I'll get the exhaust on and it should be ready to start.

Well it's running but it still smokes. I'll put it down to me honing it up to size myself. First time I tried it so it might not be the best job. But it's ok, I have most of the parts to assemble a 120cc xr100 motor to go in.
R

The 120cc bottom end is going together. Slowly but surely. One of the shift forks was worn so it got replaced. And I'm missing all but 1 locating dowel, so now I'm waiting on those and new cylinder studs. 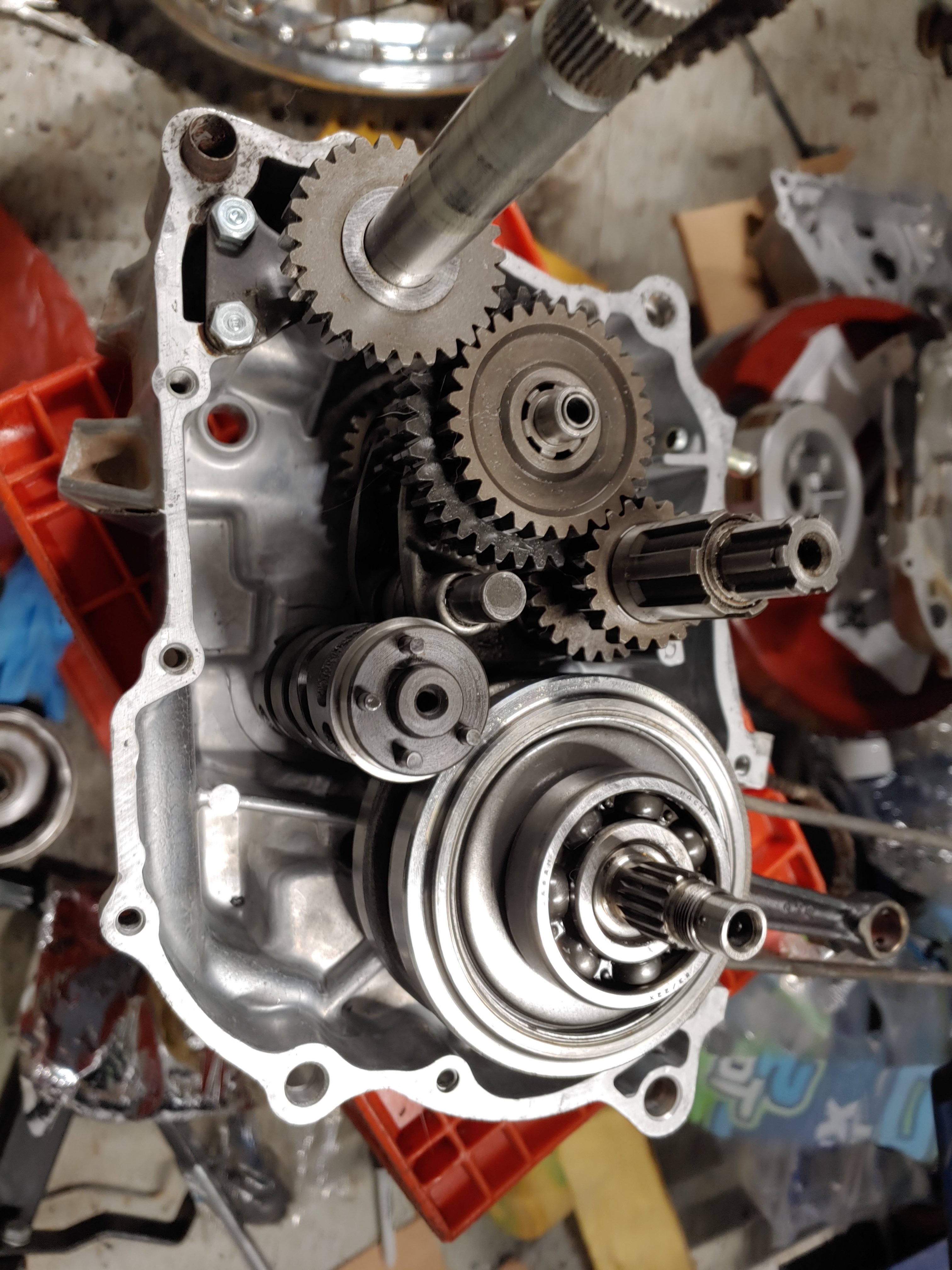 This thing should rev up pretty good. TB120cc big bore, hotcams 1018-1, lightly ported head(mostly casting flash and lip removal), and the ultimate piece- the out rotor kit. Flywheel is much smaller and lighter than stock, but still has a lighting coil. Had to make the adapter plate and the crank seal, but it all fits. This little bike should be a wheelie monster for riding around the yard.

Slowly but surely it is coming together. I might even take the time to make it street legal at some point. 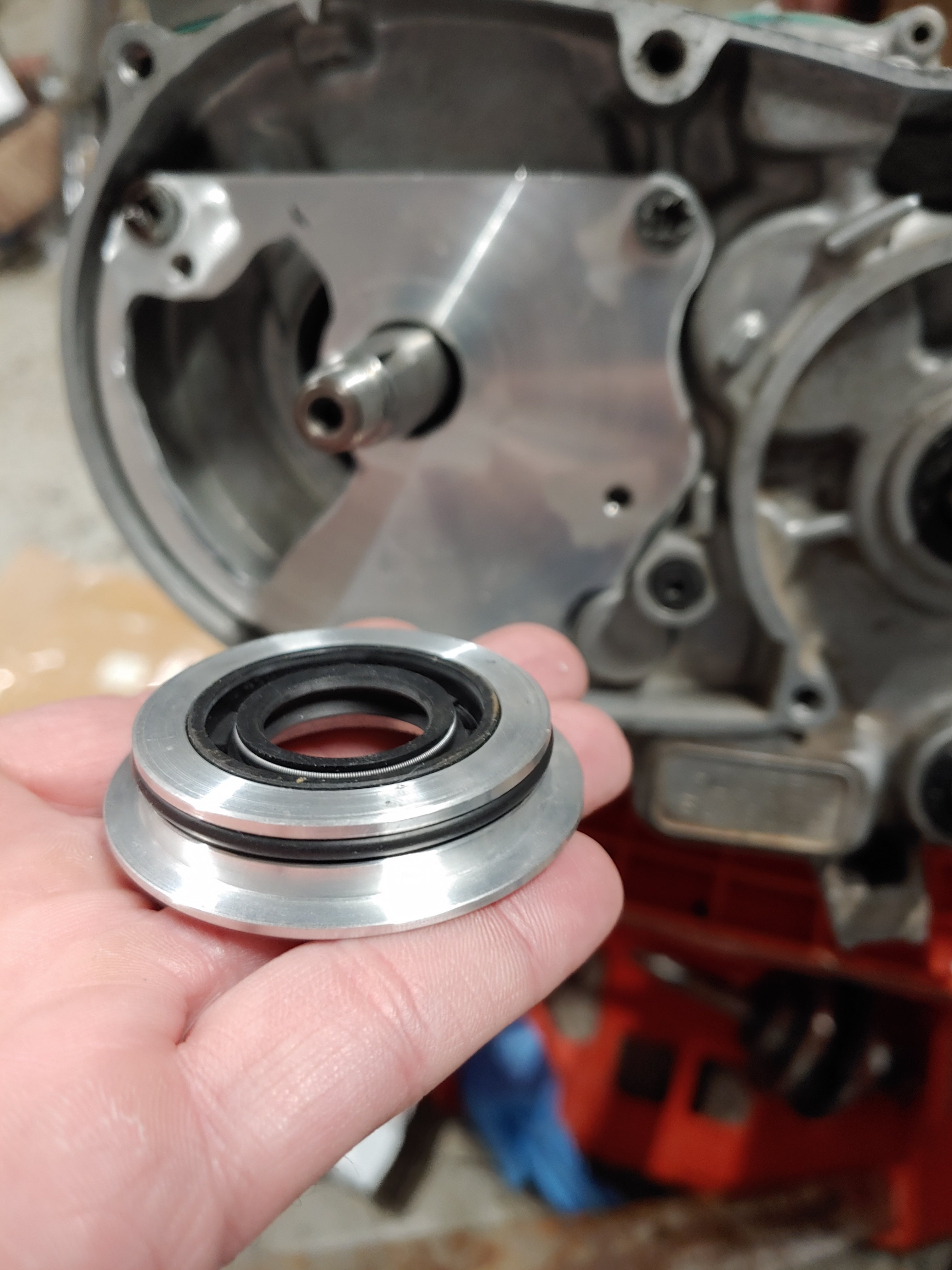 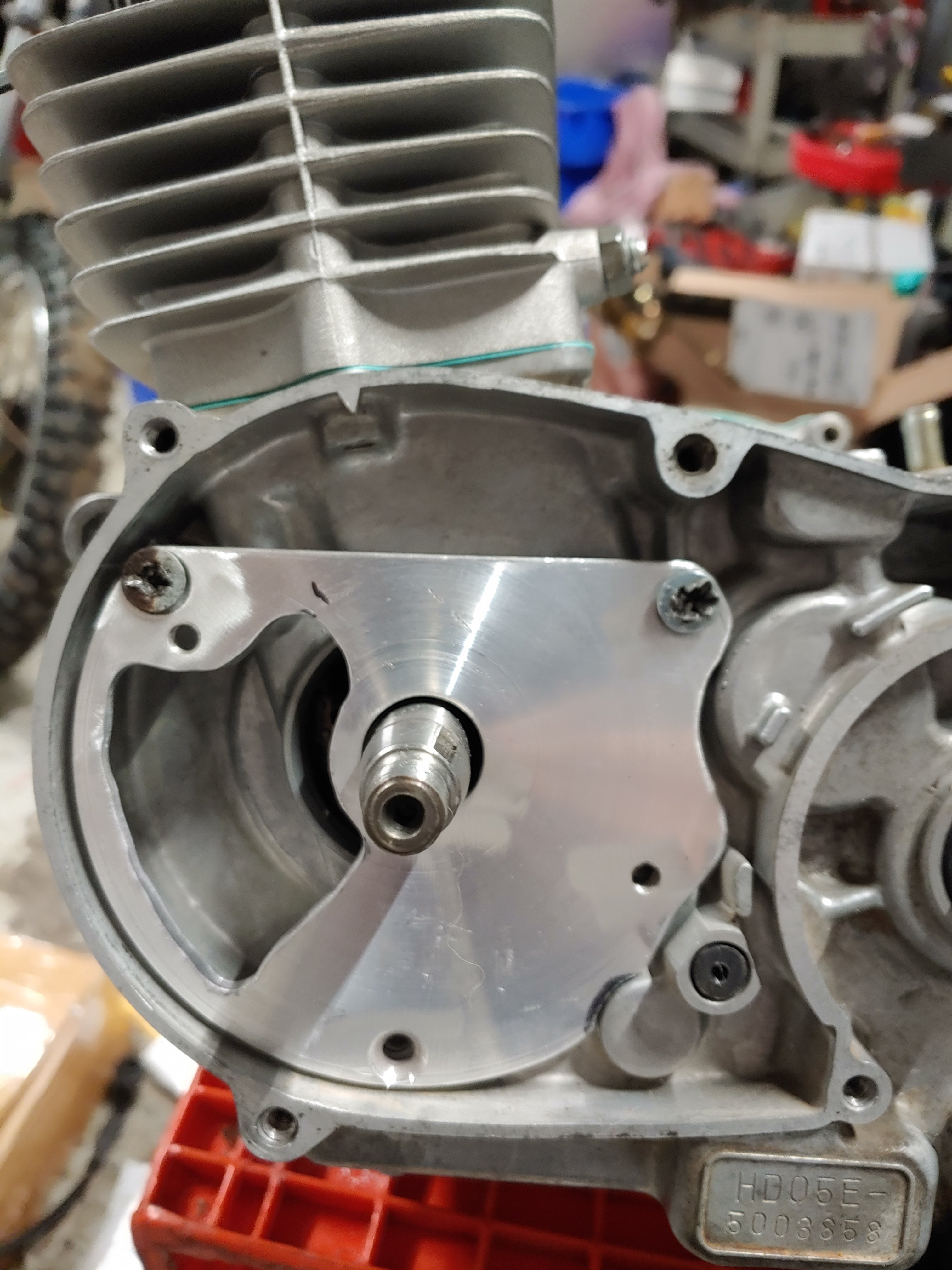 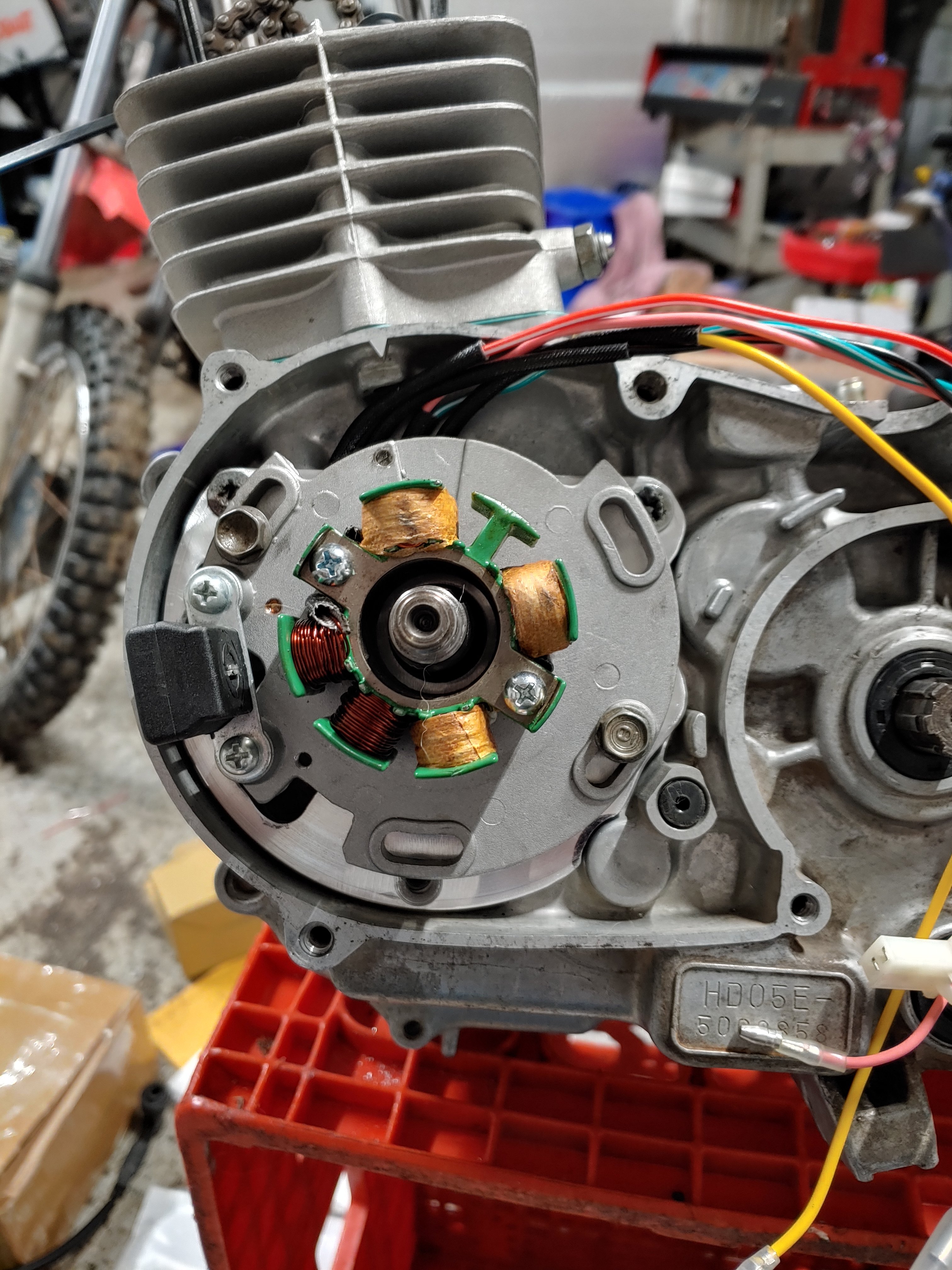 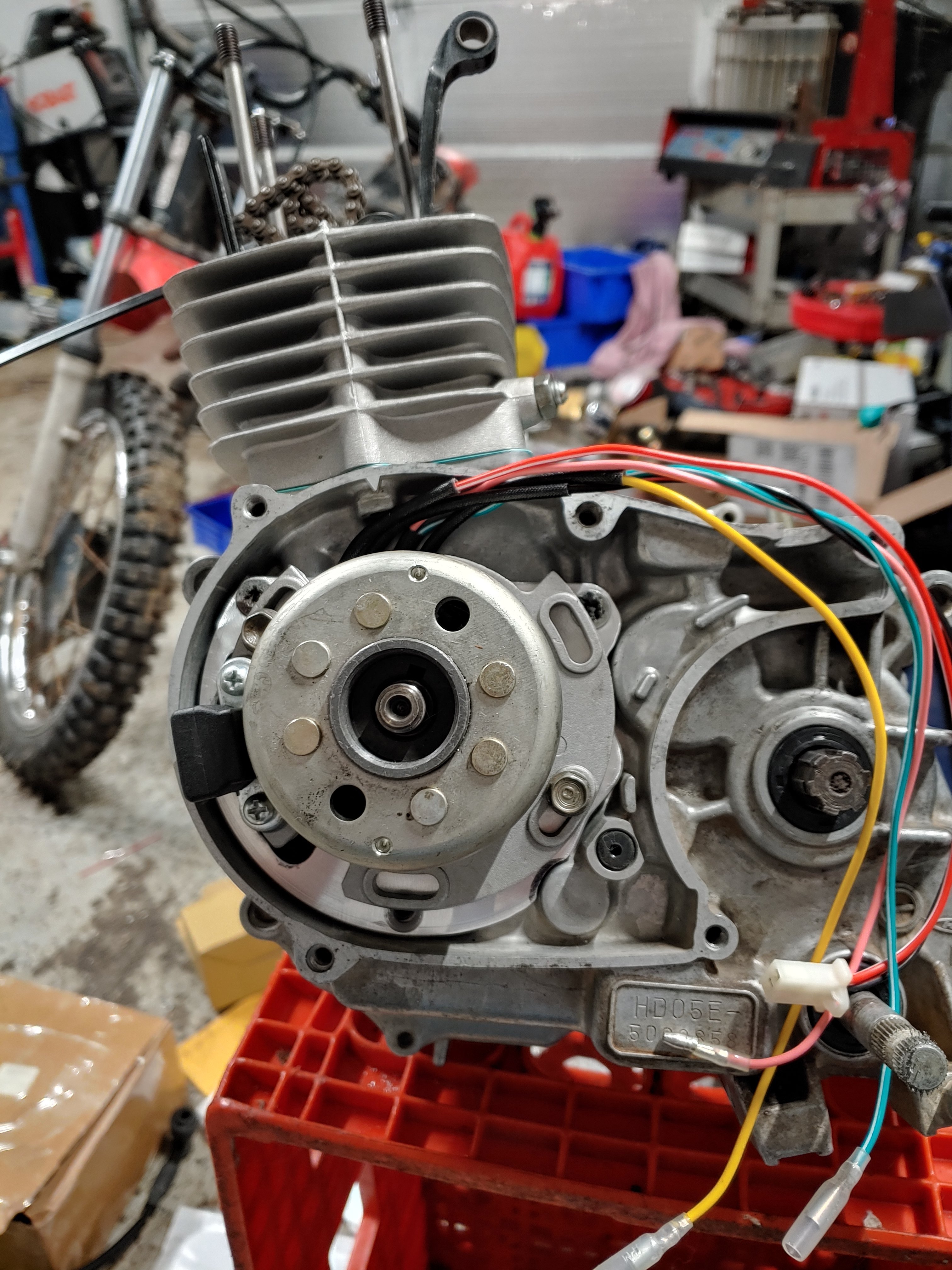 Getting closer, oil cooler is loose for the test fit. Motor is together, slowly but surely it's getting there.

I did figure out the footpeg mounts are different between the 75 and 100, so I have the correct one coming. 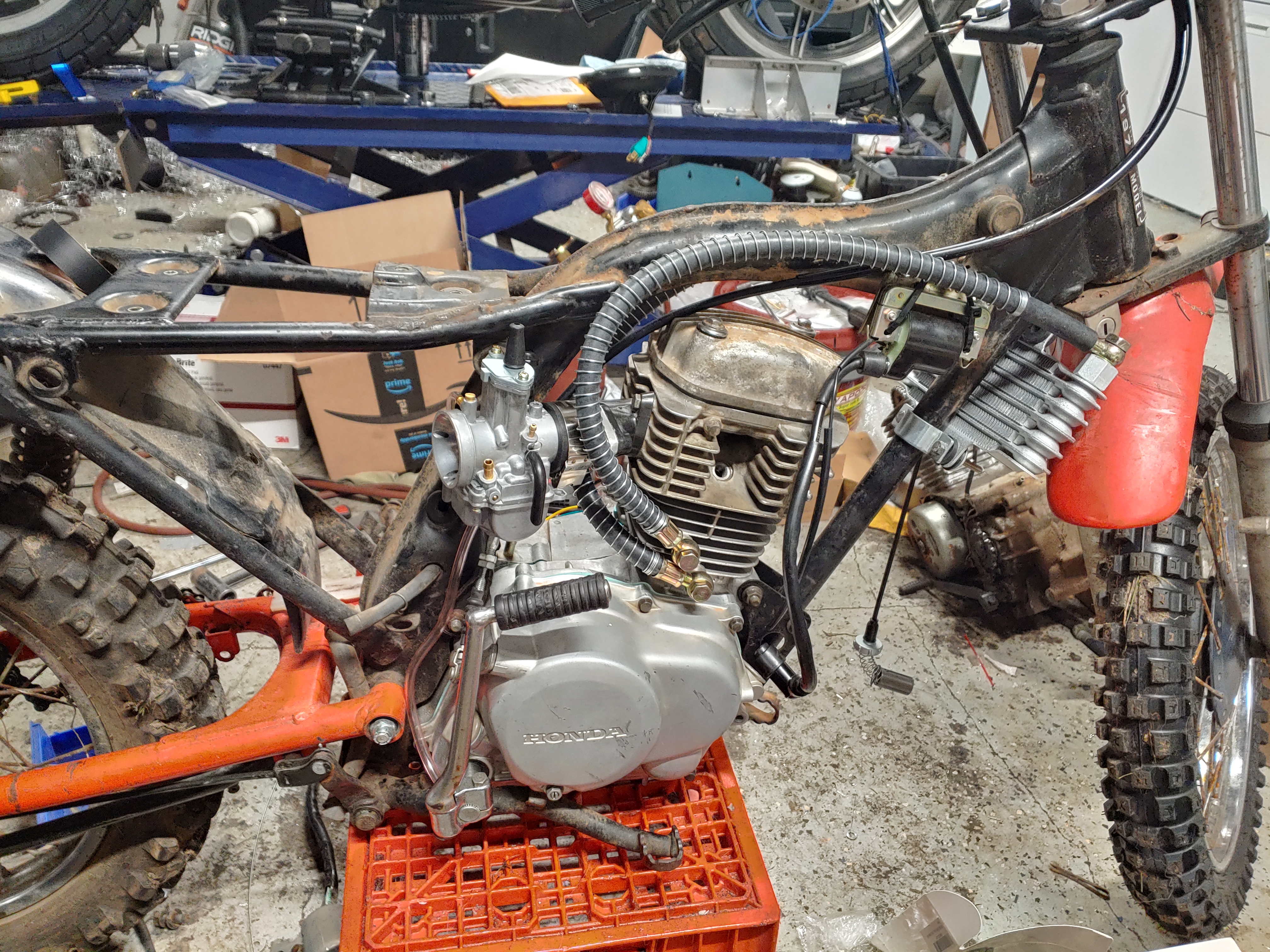 I love how the milk crate matches the swing arm.
R

Lol, totally unintentional. Just since I discovered the stock 75 foot pegs don't fit, it doesn't have a kickstand until I get the new bracket. The milk crate just happened to be handy to keep it upright.
R

Got the oil cooler tightened up, put oil and a spark plug in and filled the float bowl up. And it started on the second kick. Still needs an exhaust and the correct footpegs won't be here for a few more days, but it's close to riding. I have all the tube and a muffler for an exhaust, so I can work on that.
R

Not the prettiest, but the exhaust is almost done. Not sold on the fake CF, but it was $20 cheaper than the same muffler as just plain stainless. 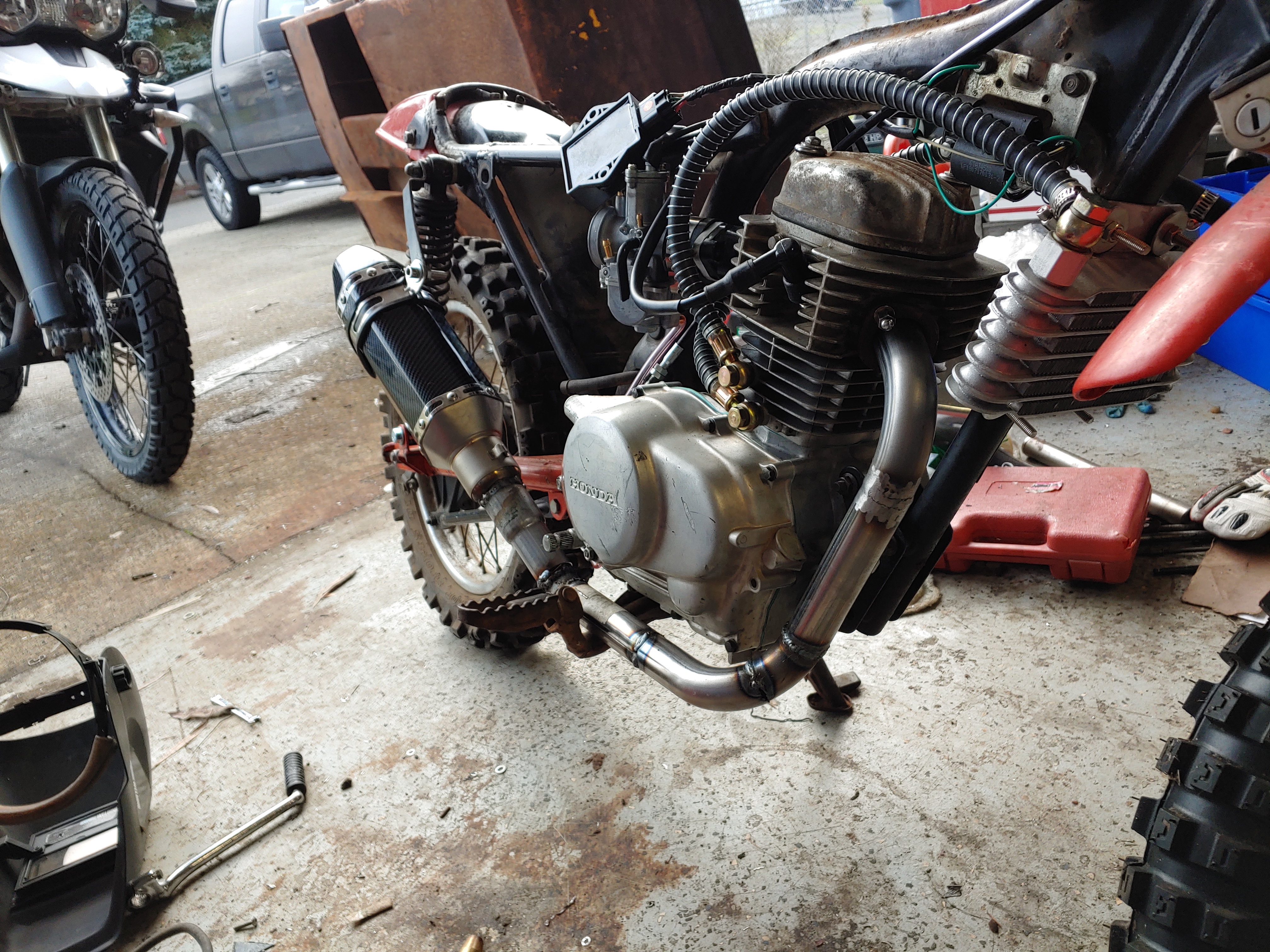 Exhaust done, but one exhaust stud stripped. So waiting on a helicoil. It runs and rides. Doesn't even sound too bad or too loud with the china special muffler. Next up is to order new seat foam, then I can put the seat cover on. Air filter should be showing up any time from amazon, just a uni filter. CDI is mounted under the seat on a plate I cut to fit where the stock battery box attached.

I had to add a small heatshield. Rode for about 20 minutes yesterday and started to melt a little off the heel of my boot. I cut down and modified the headshield off the original muffler.