Thanks. I saw that too. No frames listed for sale, complete bike only it seems.

Mike Lawless said:
Thanks. I saw that too. No frames listed for sale, complete bike only it seems.
Click to expand...

That is Santiago Choppers of CafeRacer TV fame. I believe they get their frames from the Norley factory in the UK.

I see. I haven't watched much of the Cafe Racer show. Thanks for the info

DTT BOTM WINNER
Ref Nickel Plating, last time I checked it cost around 3 times the price powder coating. Also its very thin, Nickel plating (and chrome plating) will show up every flaw and poor weld on a frame.

It seems I've maxed out photobucket's 10gb monthly limit on here, not too worry, the pics will show again on the 19th when the monthly allowance resets.

Finally wheeled the bike out from where I built it, as I'll need more elbow room when it comes to taking it apart. Here it is next to my 93 888 SP4 rep.. The footpegs are missing as need them to make the exhaust brackets. The tank strap has been cut to size and its hook riveted, works ok, but breaks up the lines of the tank to me. Maybe something to change later, in the meantime still lots to do to get it on the road by my self imposed deadline of April.

I love the looks of both of your bikes mister!!

DTT BOTM WINNER
Made a start machining the new velocity stack, just drilled it to match the size of the S&S carb so far..


With the Ironhead now in my garage, makes it easier to work on. Got the sprockets lined up, they weren't as misaligned as I first thought, so only needed a small spacer behind the front sprocket.

Finally one of the last jobs to do before the bike is taken apart for powder coating is to make the exhaust brackets. These are a bit trickier than usual as they need to be mounted to the frame via two bolts, not just one. This is because they sit almost parallel to the ground, at an acute angle to the silencers so they need to be sturdy. They are made from 10mm alloy plate, they'll sit behind the footpeg mounts (not in front as in the photo), and once drilled and shaped they'll need to be heated and bent to take up the 20mm offset to the silencers..

Awesome Norley! I just read through your entire build thread and it's absolutely fantastic!

DTT BOTM WINNER
Couldn't do much this week, waiting on some help to lift the engine out of the frame, so I decided to weigh the bike before it comes apart. I used a couple of bathroom scales under each wheel, then swapped them around to check if there was any difference in readings.. there wasn't.

There's a reason these are called featherbeds... ;D

The name came about when ...Harold Daniell was a successful Isle of Man TT racer with three victories and several placings in the Tourist Trophy races and the Manx Grand Prix. After testing the new Norton frame in 1950 he declared that it was like "riding on a featherbed" compared with riding the "garden gate'' Norton — and it has been called the featherbed frame ever since.

Here's a photo of the LHS.. exhaust mounts all done now..

She's going to be a handful for sure.
Absolutely gorgeous
Let me know when I can nominate her for BOTM... so deserving

Hoosier Daddy said:
She's going to be a handful for sure.
Absolutely gorgeous
Let me know when I can nominate her for BOTM... so deserving
Click to expand...

Agreed.... Sure to rattle some cages!

I know she isn't finished, but I figure if I start the slow clap now, the crowd will be roaring by the time you're done!

DTT BOTM WINNER
Photobucket has maxed out again (all the photos will reappear on the 19th), so I'll try using attachments instead..

Found a hardened steel pin that just happened to be the right size to act as the clutch pushrod, which saved some work.. The one off slave cylinder is shown next to the original cable operated ball and ramp clutch actuator.

While my mate Jeff did a great job machining a new velocity stack for me, from solid billet. Just need to slim down the base a few mm (make sure it doesn't block the vent arrowed) and polish it..

The Tritoneers are gonna call sacrilege on me for saying the best looking motor for a featherbed frame is the Harley ironhead.
B

Beautiful, just beautiful. The lines are great and although I am not a fan of a Harley, that engine sure looks nice in there. Good job. 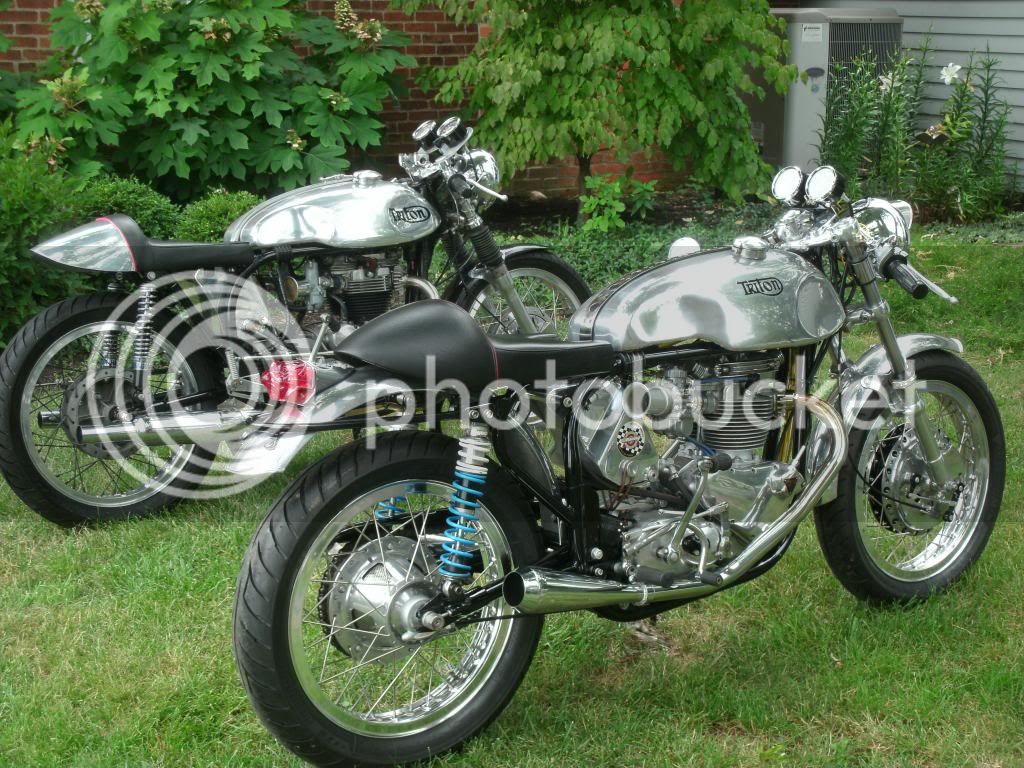 DTT BOTM WINNER
It would've been easier to use a later Evo 883 or 1200 engine, but they didn't look quite right to me, too modern to suite the Norton frame. The Ironhead fills the frame nicely, the old Triumph engines look a little small in a Triton, with too much space around them.

Today made a points cover, I had one made for a Big Twin, but they have the two mounting holes horizontal, while Sportsters have theirs vertical (No idea why). I started out by hacksawing out a raw disc from some scrap 6mm plate, drilled and countersunk two mounting holes, then handed it to Jeff who machined it round in the lathe, added a bevel around the edge and machined the face smooth. I didn't polish it as I want to get it engraved.

To hold it he couldn't drill a centre hole, or hold it in the chuck. I was surprised how it was done. He used two thick alloy discs, both a little smaller than the points cover, pressed tightly either side of the cover. One disc was held in the chuck (the part that spins) and the other was pushed hard against the front of the cover and held by the lathe tailstock. Very clever, I'd never had thought of doing that.

Yip this is looking sweet 8)

Bevelheadmhr said:
It would've been easier to use a later Evo 883 or 1200 engine, but they didn't look quite right to me, too modern to suite the Norton frame.
Click to expand...