It's been awhile since I've been on the forum….new baby, new job, crazy at home, yadda, yadda. Finally got a chance to start working on the engine: '76 Honda CB750. This is my first tear down and am a noob to all of this. Just got my bike license this past summer.

So, got the motor taken apart. The head was leading oil. I dismantled most of the bike, had only the engine left in the frame, did some soda blasting on a home made soda blaster, and rinsed if off with water after. Got the engine in the basement and there is sat. Doh! First mistake and lesson learned. Some water must have gotten in. The photos look pretty bad but it appears to be mostly surface rust. Nothing was seized, even the piston rings. I have the pistons out and the cylinders surface are soaking in some WD40. The pistons themselves aren't too bad actually. I have hoping to avoid having to re-bore the cylinders.

Question: was can I do to remove the rust, hopefully it's just surface rust from the cylinders? (only two have rust on them) Saw on you tube a guy using and recommending using a dremel with a brass bush:

Buddy said it wouldn't harm the surface of the cylinders. Thoughts? 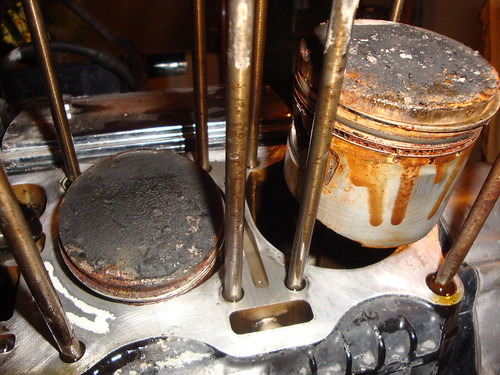 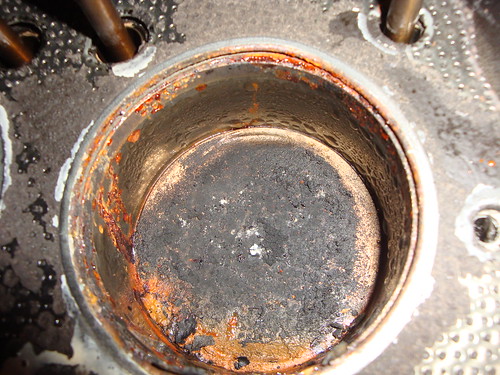 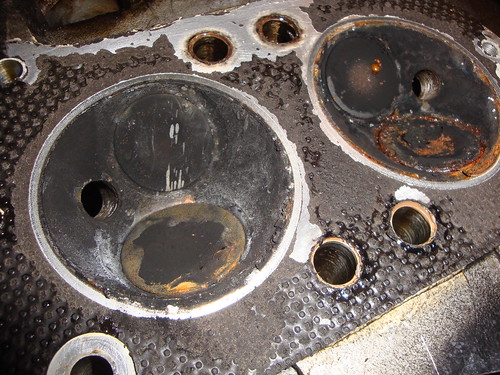 And how would you recommend that I go about cleaning up all that carbon crap on and around the valves/pistons?

Anyway, thanks in advance for reading.

clean the cylinders with soapy water and scotchrite then hone with a flex hone and inspect
that carbon in the chamber is not the issue the rust is :'(
time to pull the valves inspect/refurbish as needed

With the cylinders in that bad of shape, chances are the water went past the rings into the bottom end. I suggest and entire teardown.

Thanks guys - much appreciated.
HD - love the clip. I was 90% that I was going to open the bottom, but now I will for sure. Cheers!

best rust removal stuff i know of is molasses and water . soak rusty parts in 6parts water to one part molasses for three days .remove and clean any oily stuff off . rust converts to black muck and scrubs off. put back in bath after cleaned for another three days.

clean again and repeat till rust goes...does not eat good steel. reworked really rusty parts and tools this way and look like new..when parts are clean of rust , oil them with wd40 as they rust again quickly.

The best and easiest way to remove the rust (not the pitting) is aluminum foil. Just take a small piece of foil fold it into quarters wet it and start rubbing. It sounds strange but it works great with minimal effort. The foil is softer then the metal you are cleaning so no chance of marring the surface. Give it a try!

you're boned, overbore and recut the valves/seats unless you have a thing for engines running badly or plan on never riding it. rust on the cylinders is the result of a chemical reaction between oxygen and iron, therefore, where there's rust, there's less iron underneath it...

Thanks fellas ! A few things to try, one kind of weird (molasses - which might work!), before I throw in the towel and have it re-bored.

that is too true

the molasses trick i use on old tools and found items..but it does work well on them..

Yup, two of the four cylinders are pitted - I don't think honing them will do the trick.

Might be a dumb question for you guys, but this is my first bike, but if I re-bore the cylinders I will obviously need new pistons and rings, right. But do the valves need to be enlarged as well or can I just get away from just lapping them?

I've got a couple of new photos to post up - before/after. The rust wasn't that bad actually. It did make it's way onto some of the valve stems but did not do any damage. Still have to crack open the bottom.

your valves won't need to be replaced unless they are also rust damaged, I don't recommend lapping, you can have the engine shop that does the honing do the valves as well, and they'll last a very very long time compared to lapping. they might charge $200 for all the valves, but when you never have to rebuild your engine and can just ride the bike and enjoy it indefinitely, it's well worth the up front cost

also, you may want to price out an 836 kit and the boring required (4mm), they're so plentiful now it may cost you less than just finding .25 over pistons 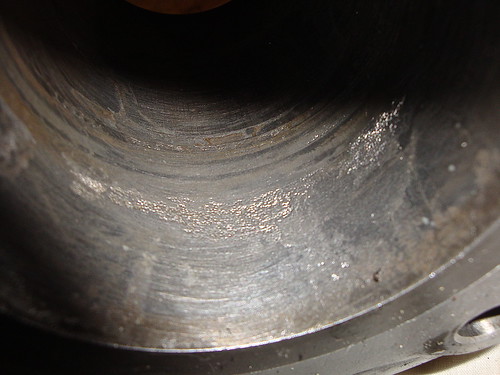 cylinder numbers 1 & 2 are pitted - not a chance honing would fix it, eh? 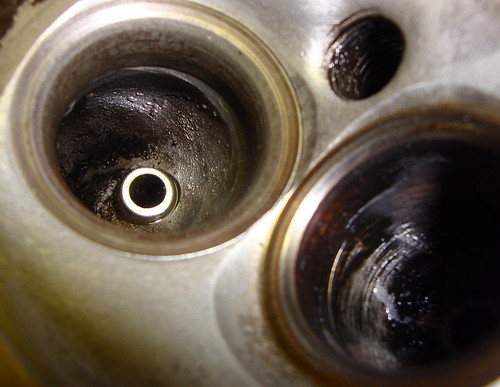 did a quick clean up on the carbon around the valves -

RCC - if I went to a 836 bore what else would need replacing other than the piston and rings . . . . . . cam, carburetor? Money is an issue, so I don't want to go to nuts. With going up to the 1st oversize can I get away with just the rings and pistons?

Again, I appreciate the help!
Cheers

You can run an 836 without any other mods, you just won't get as much of a gain, nice though, that later you can swap the cam and get major gains

Have a buddy who has a buddy (and so on…) who is going to bore them for $25/cylinder - not bad from every where else I've checked in town.

I opened up the crank case the other night - no water got in thankfully. Looks in good nic, not sure if I should pull everything out to check the tolerances……no show of wear, chains are good, no cracks anywhere. I am going to get the case soda blasted to get rid of the crap paint job the PO had done - not sure if it's just as easy to button everything back up or pull it apart and do the both halves.

for an 836? I wouldn't trust that price, does he have any references?

Staff member
Only up 0.25mm? That pitting might be deeper than that, but if that's what your friend said will do the trick then good stuff. $25 per hole is about 1/2 what I've ever paid.