I bought this bike a few weeks back from a local CX owner who's also a member of the Aussie CX site and and Do the ton using the name Rat-cx. Some may even remember this bike over the last couple of years. Interestingly when I was first looking at CX's a few years back this one came up on ebay but I missed the chance to get it and bought a different bike. Rat-cx bought it and got it to the point you see here and now I've taken ownership of it anyway

I still don't know what I'm gonna do with this bike. I took it out for fuel the other day and had a ball as it is but the clubmans aren't good for my back. Could that seat and tank work with dragbars... maybe, maybe not....
The engine through those harley pipes sounds bloody great.

So I'll see what happens and like the other build I'll probably change my mind over the next year or three before I decide what to do. A lot of what happens will depend on my back's requirements, usability as a daily scoot in summer, financial cost, and local laws (such as the need to have a rear guard and the number plate centred).

The only change I've made so far is to fit the Nissin remote reservoir master which is a fantastic bit of kit. That with the braided lines and stock calipers is plenty good braking for this bike.

So here's some pictures of the bike. 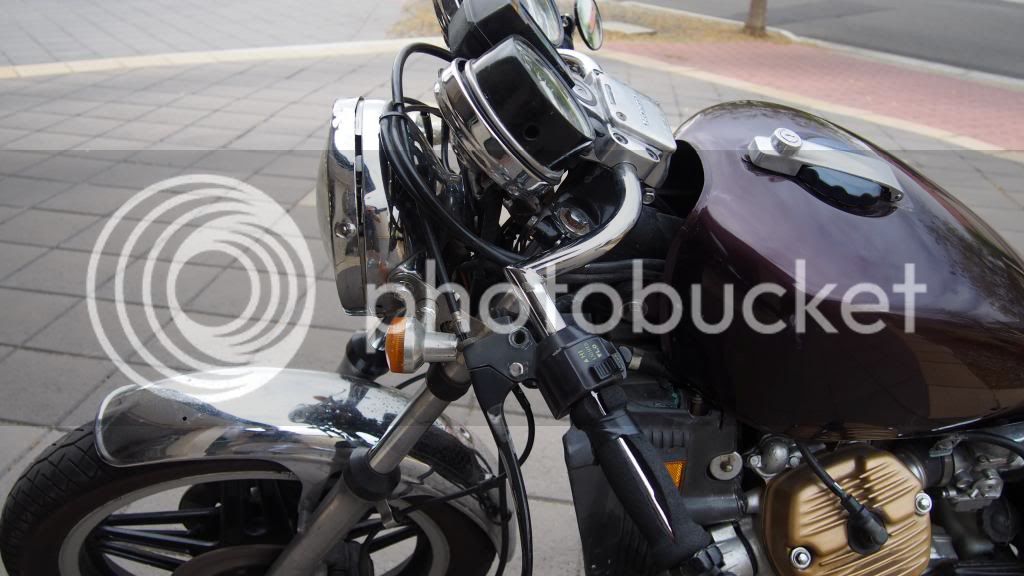 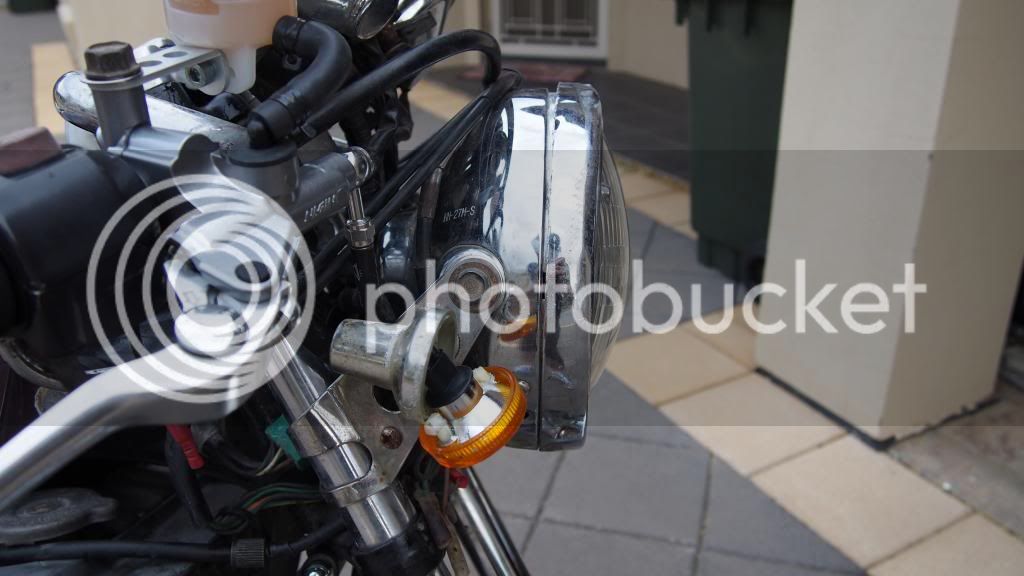 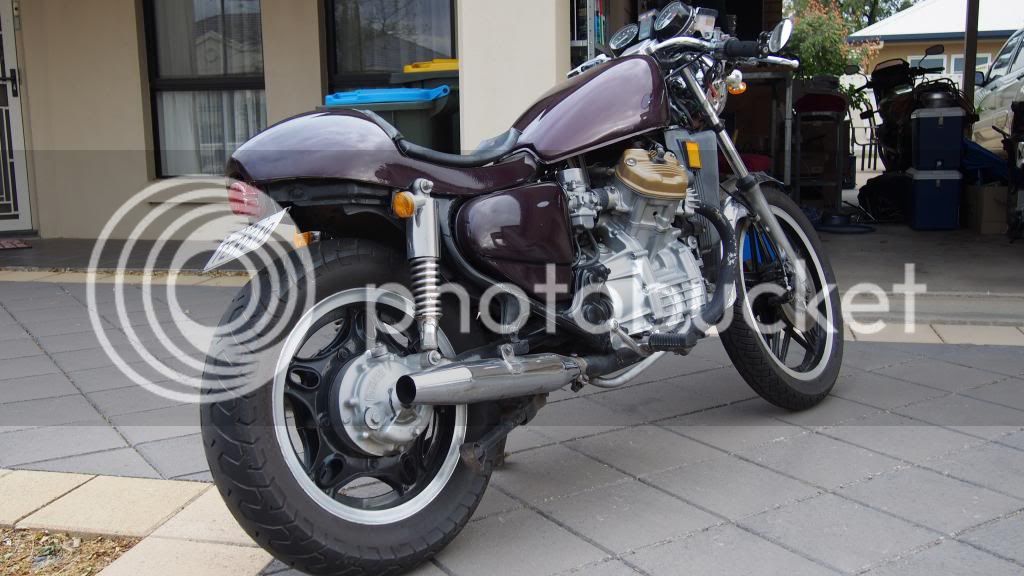 And after I took off the radiator surround and dropped the bike's weight be about 127kgs.... 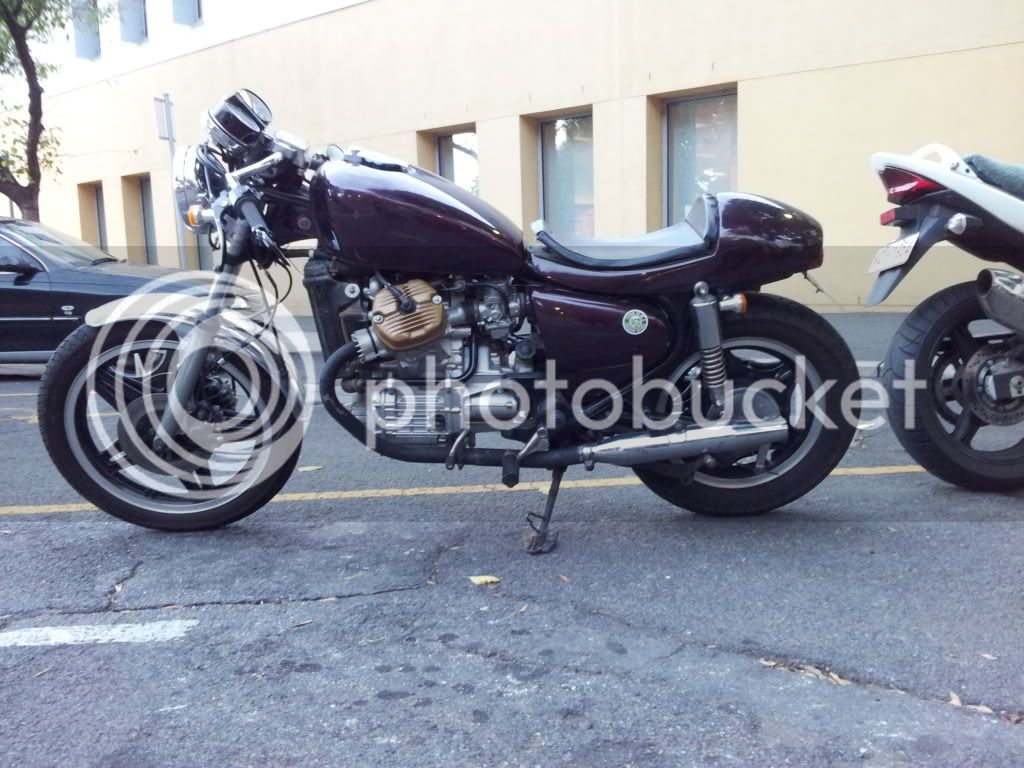 I've already tried fitting up a Shadow (AKA Deluxe) tank but don't think it works with the seat. 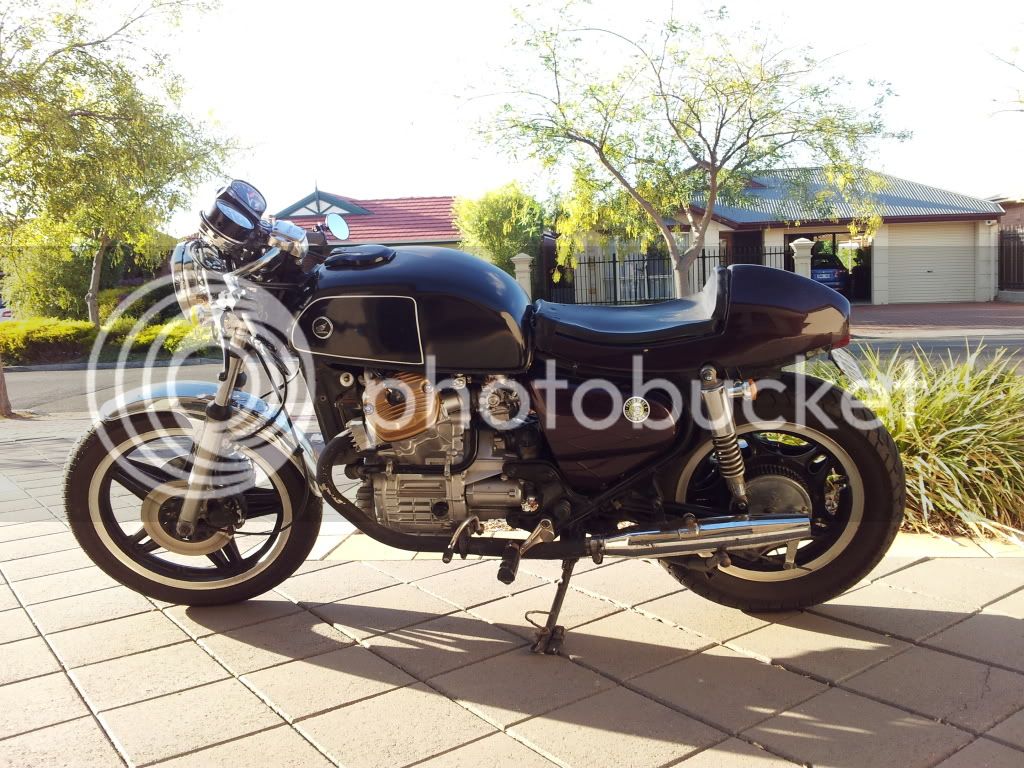 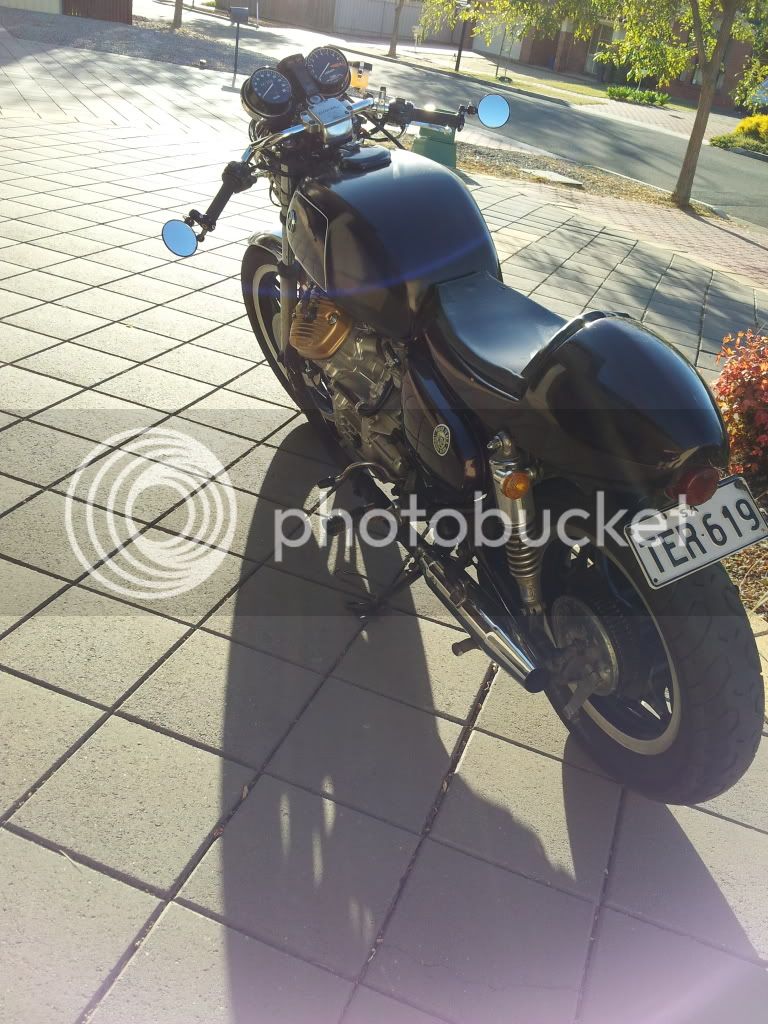 actually, I dig the deluxe tank with that tail better than the custom tank.


The custom tank always looks a little too cruiser to me.

The deluxe tank looks so much better.

Well, it's not going to be a cafe any more.

In the early days after I bought my first CX I dropped the back end to see how it would look. I've wanted to build a bobber ever since but I really wanted to build a daily rider first. I'd also like to build a scrambles type bike so it was always going to be a toss up with where I went with this. I guess it's the custom tank and rear wheel already bolted on that made my decision for me.

After a bit of chin wagging with a couple of mates the other day the question we had to answer was how would it look with the back end lower: 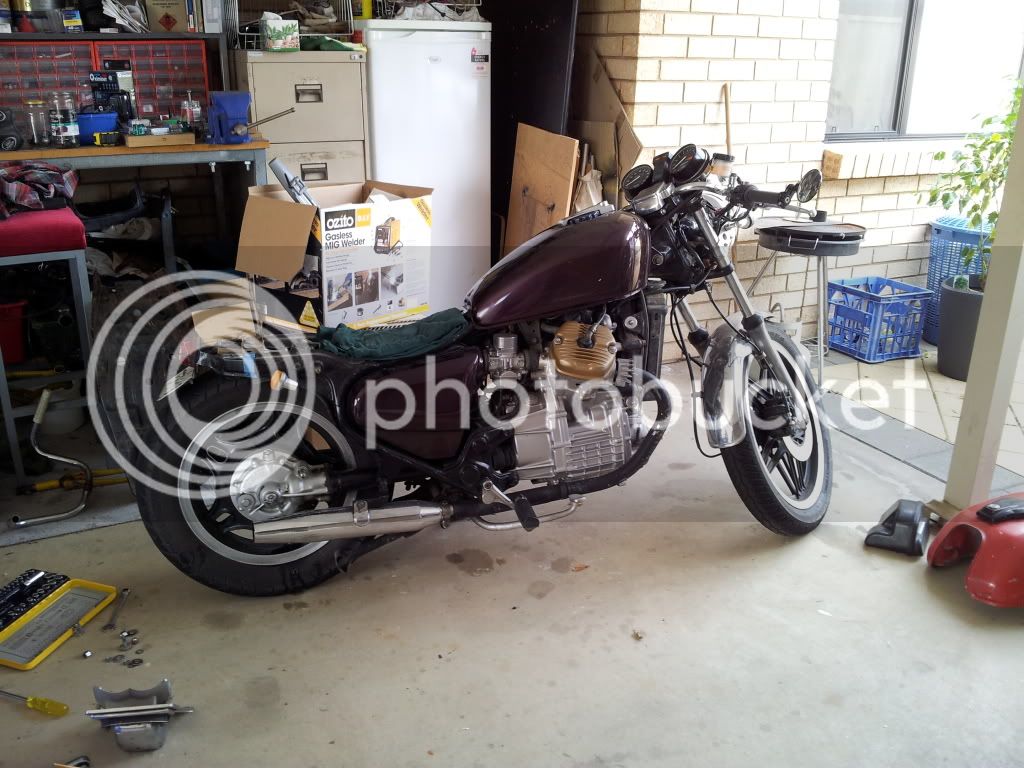 So with the decision that it looked fairly smashing I took the grinder to the frame and front guard and shifted the guard the rear: 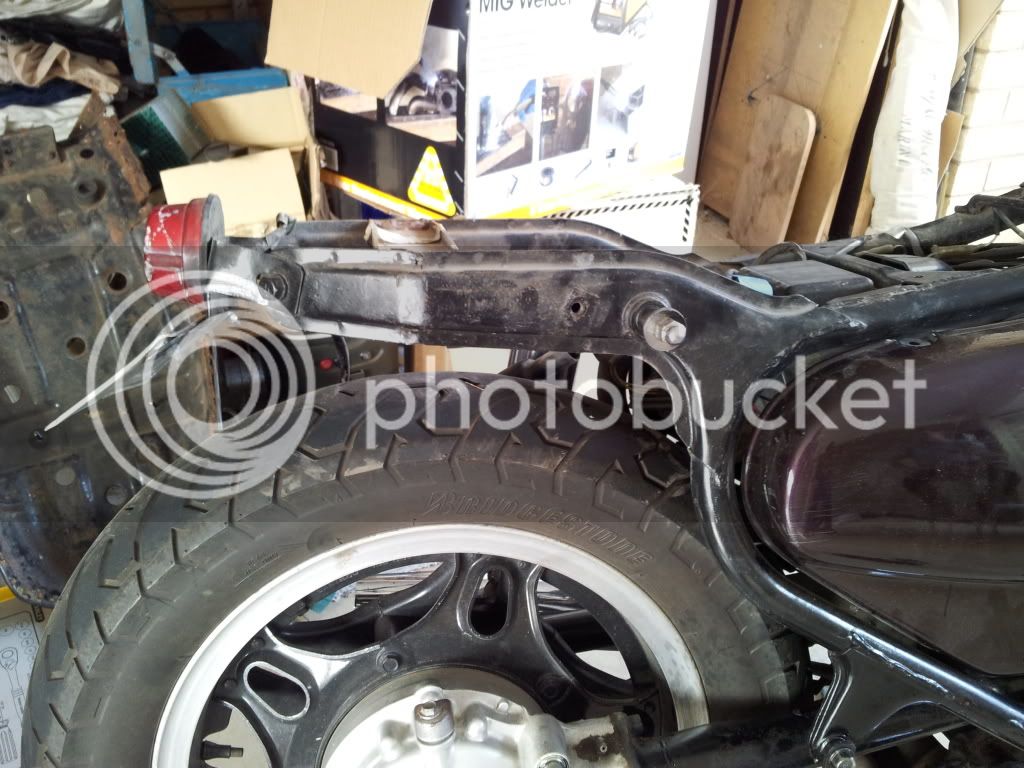 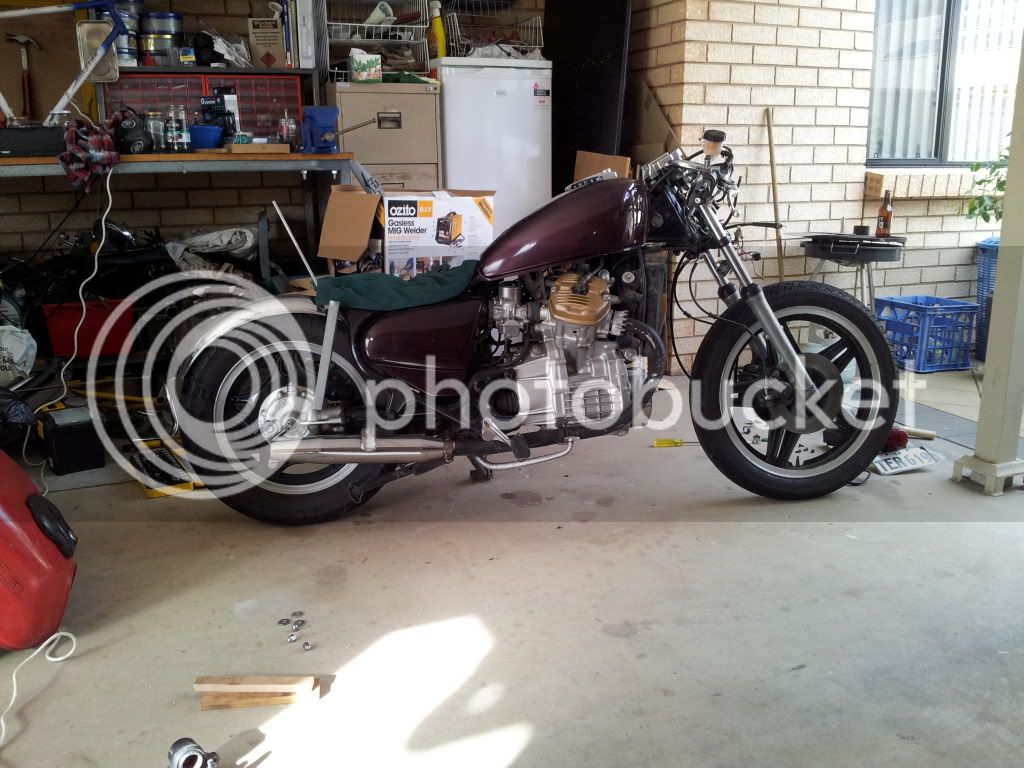 The piece of box tube is temporary but is drilled to 10.5 inches eye to eye which is the free length of the shocks I'll be using. They'll be set to a high preload to keep the back end fairly tight and hopefully prevent guards from hitting backsides Of course I'll be crossing that bridge carefully

At the end of the afternoon there was quite a bit of weight loss.... 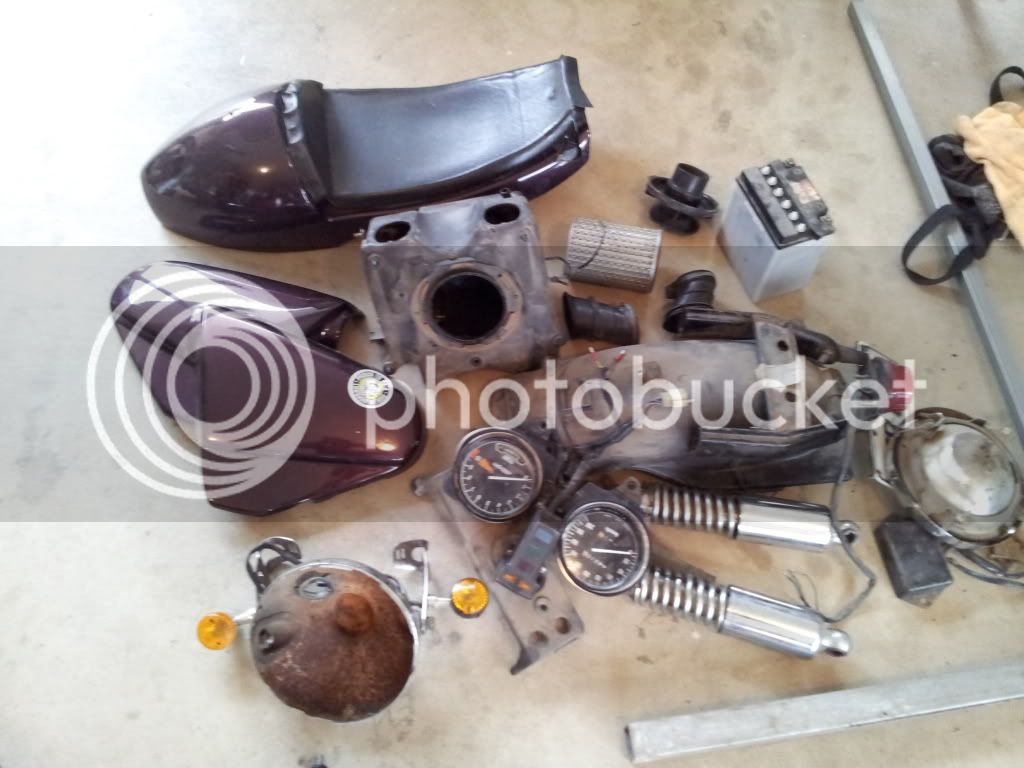 With the seat/rag mocked up I'm pretty happy with the way it sits. Those bars will be going on the shelf and I'll be sourcing something a little higher. 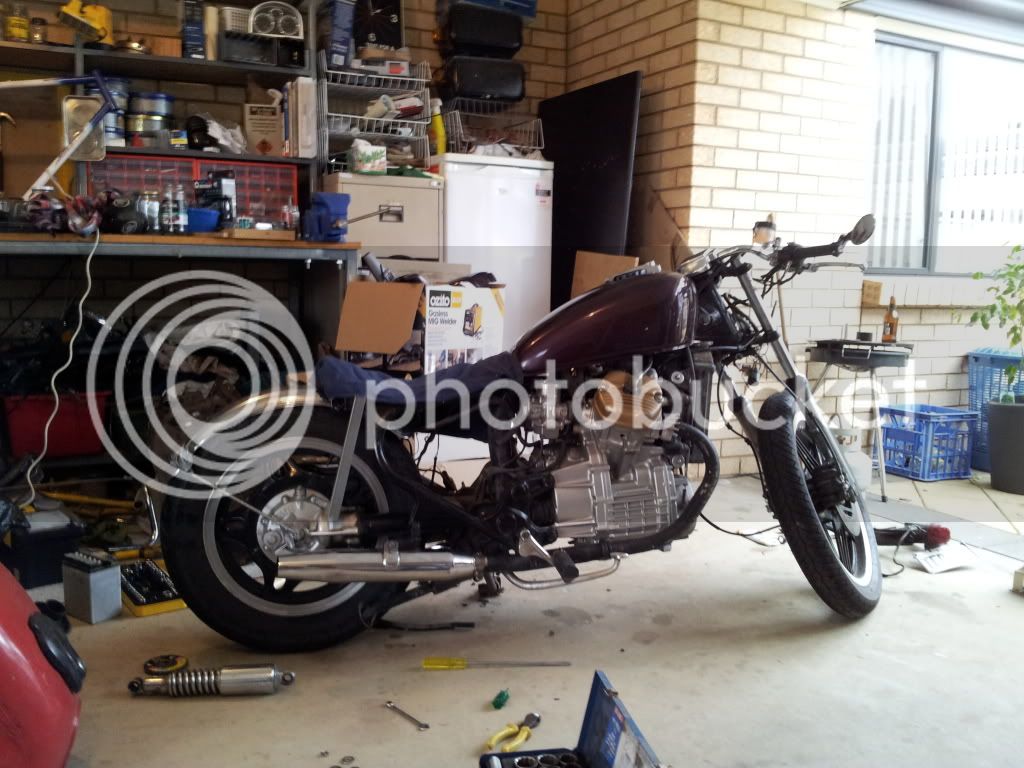 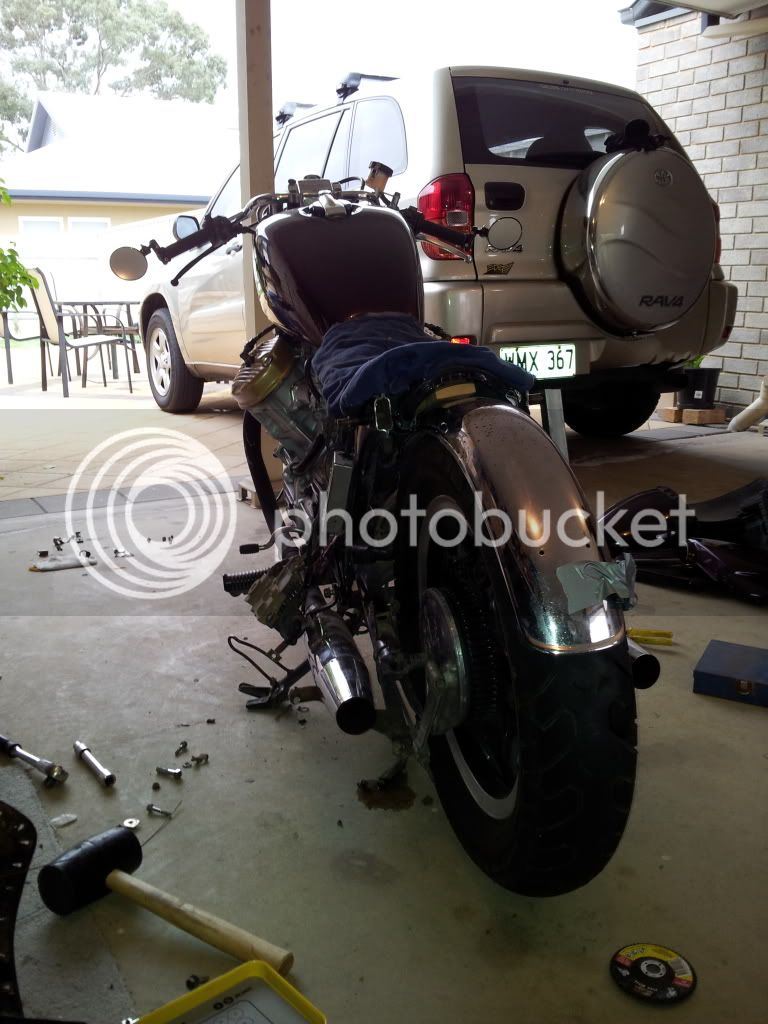 This is hopefully going to be a short, fun and cheap build so I'll be trying to use as much second hand stuff as I can. The rear guard isn't long enough so I'll need to figure out something there. It'll need to go from the place it sits just above the pumpkin level all the way round to the swingarm so I may need to get creative with the welder and some old guards off some other model bike.

Nice Paul. I'm in, bobbing one now too.

I've got a 1" drag bar, risers and a solo seat that came off my bobbed GR650 if you want them.

Yours if you pay shipping from Canada

I'm feeling terribly woolly today but decided to have a little more of a think and tinker.

I'm starting to go off the idea of shortened shocks as that presents a problem with seats clashing with moving rear wheels etc...

So I'm thinking of going for a rigid rear with a sprung seat. This affords me the chance to mount everything on the back how I like without having these fouling issues. I won't be using bars to the mount points as is traditionally done either as I'd like to do away with the shock and exhaust mounting gussets and leave the rear hoops clean. I have a cunning plan....

So here's how it looked the other day:

Today I flipped the bars over and as I thought they look fantastic. They are exactly what I wanted in a bar so there's no need for me to buy new ones. That's a plus. Here's how it finished the day - dropped 11cm from standard height with the centre stand removed and the bars flipped: 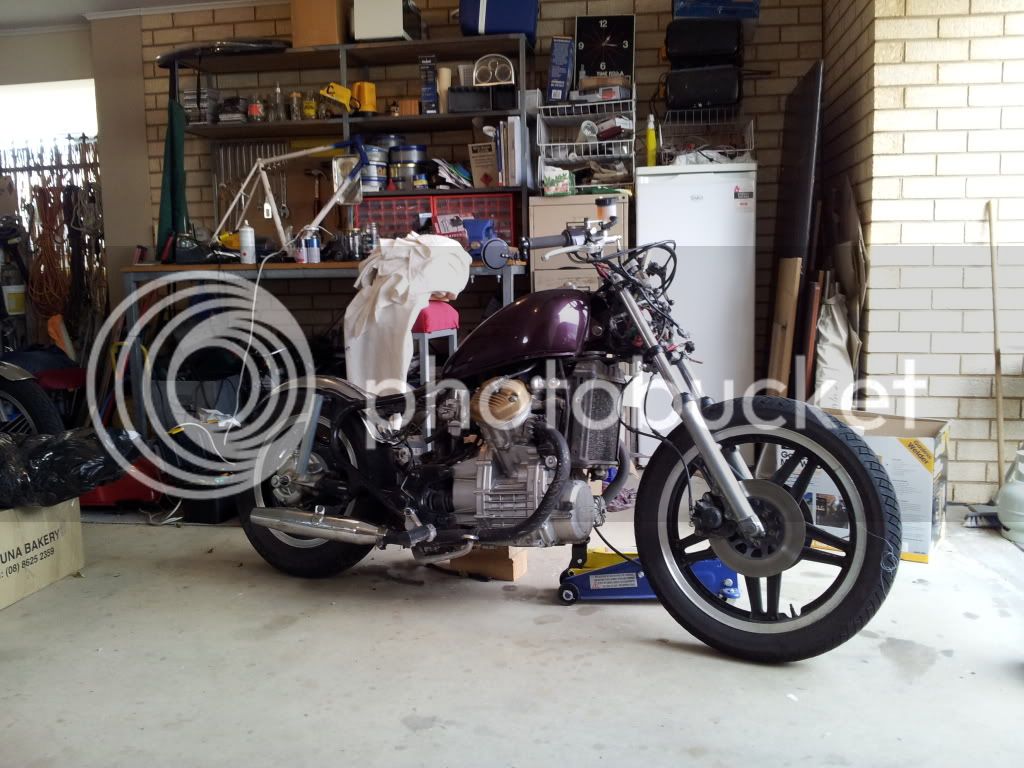 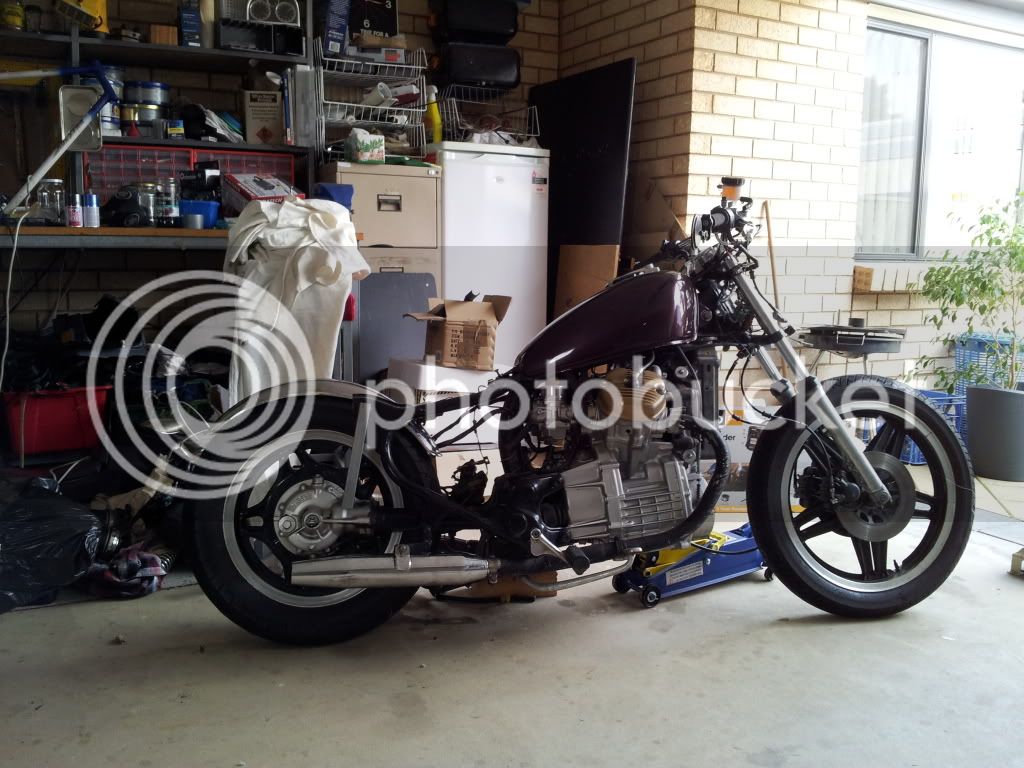 Nice stance, bars look perfect actually and with the struts psinted out it will not stand out too much, what are your plans for a front fender? I think one matching the shape of the rear may look cool, wrapping the wheel and nice and tight to the tire.

I'm gonna use a standard fender with the fender cut off and bolt on a fibreglass fender. It'll be as small as possible whilst still being street legal to avoid issues on the road. Likewise the rear will be within local laws. I've got a pretty neat idea of what I'd like to do with the rear and am looking forward to trying my hand to make what's in my head a reality.

The rear strut is currently a piece of 1" box steel with two holes drilled. I'll make up something a little more permanent soon.

I started making the plugs for the guard molds today. Or maybe I'll just be lazy an glass straight over the plug then tidy it up with filler. Either way I went and bought a whole bunch of mdf and cut out 16 semicircles of 68 cms diameter. I'll need a further 9 or 10 to do the front guard.
These will be glued and screwed to form a laminated mold, then shaped and finally I'll glass over the top of that.
I'm thinking there could be as much as 20 hours of work in the two of these when they're all said and done. It really depends whether I bother making a mold or if I decide to use the first layup as the finished product.

Bought a new headlight today from MR Motorcycles (a bike shop down the road). It's a neat little bates style bottom mount. If I get a chance this weekend I'll make up a bracket to mount it on. I also had a look at a front guard off another bike that could be a good option for my rear guard. He's happy to credit me back if it doesn't work on another part so no harm done I'll just grab a speedo off him if that's the case.

I got a chance to make up a mount for the new headlight today: 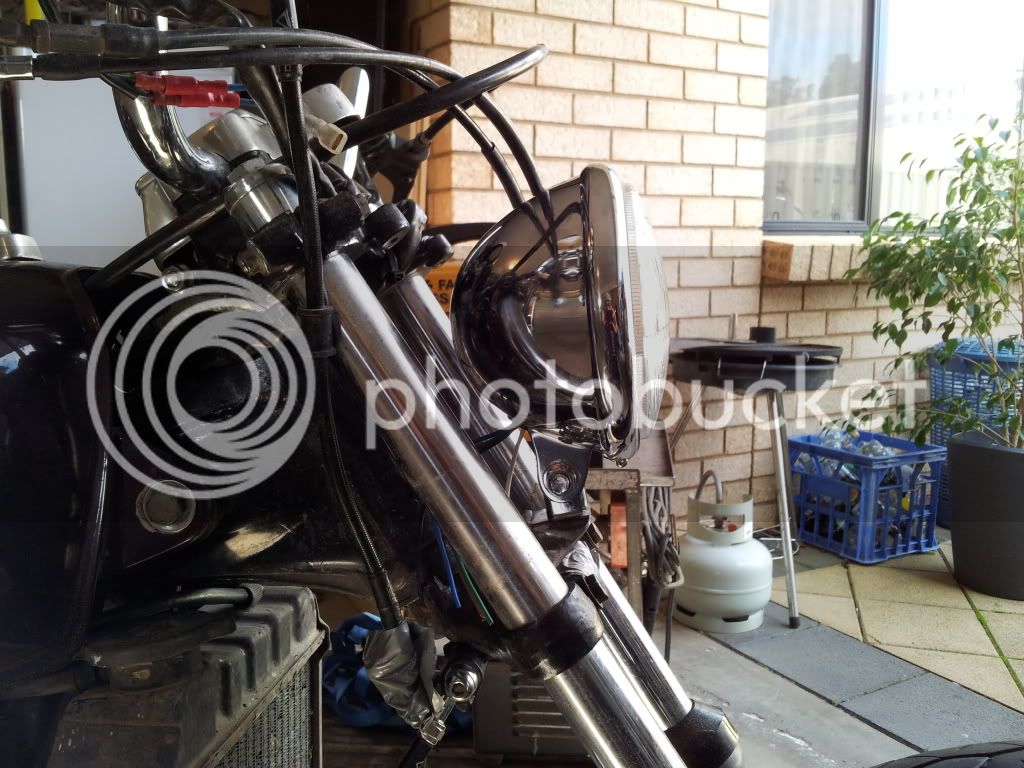 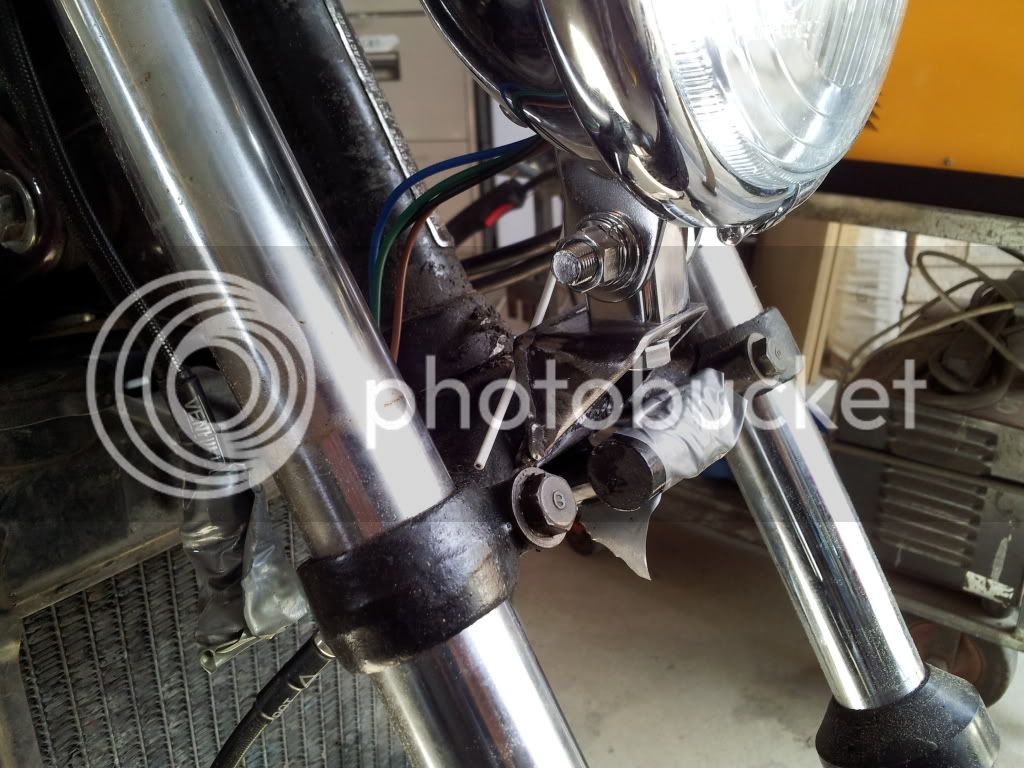 I also got a front fender off a VN900 classic to mount on the rear. Initially I liked it but I've now had a change of heart. Have also dropped the rear another 30mm. 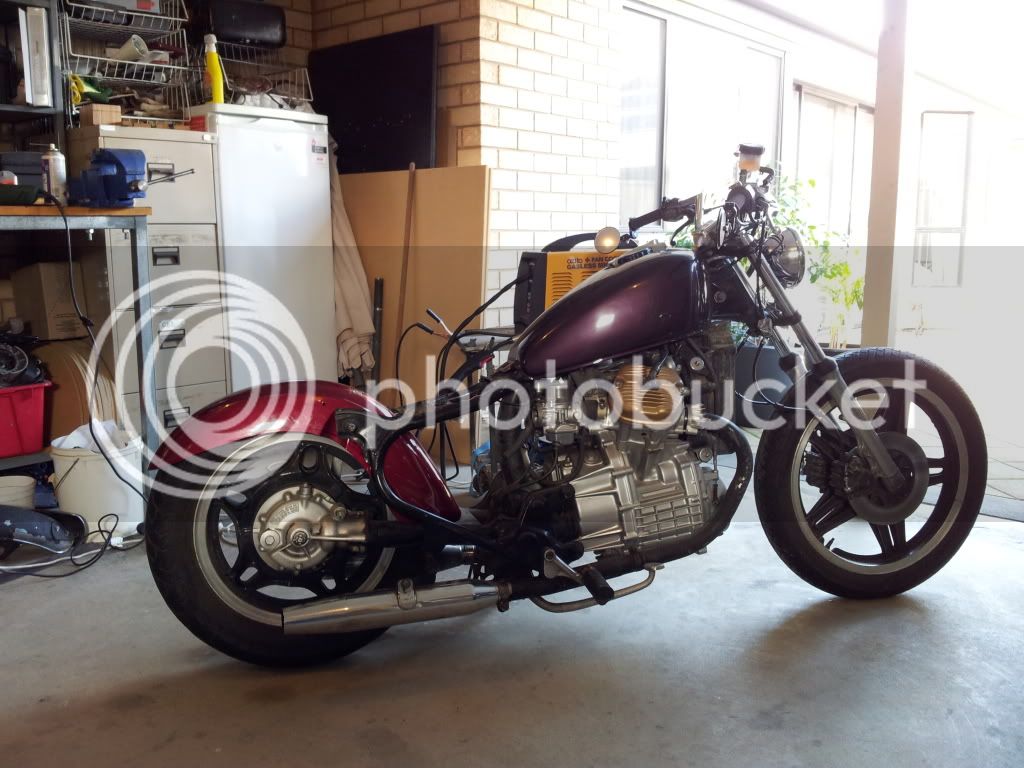 Below is with a simpler rear fender. Also dropped the muffler for now. I'm thinking about dropping them altogether and putting baffles in the pipes. I'll need to check out the legalities of that first as I'm not keen to get defected on the first corner: 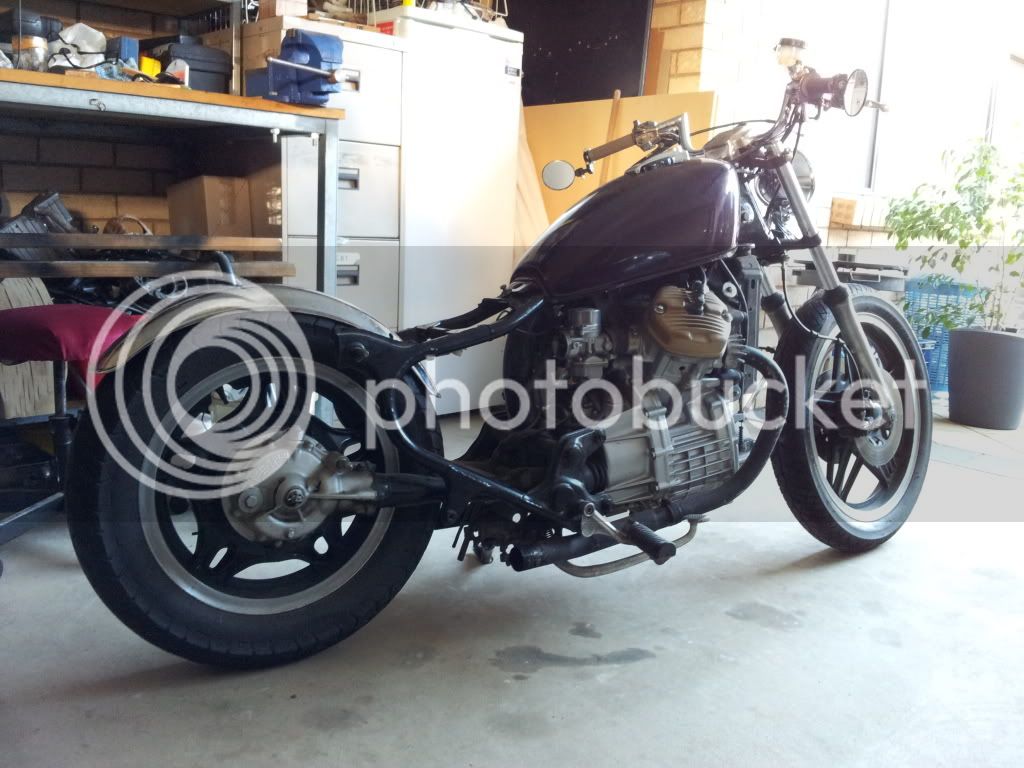 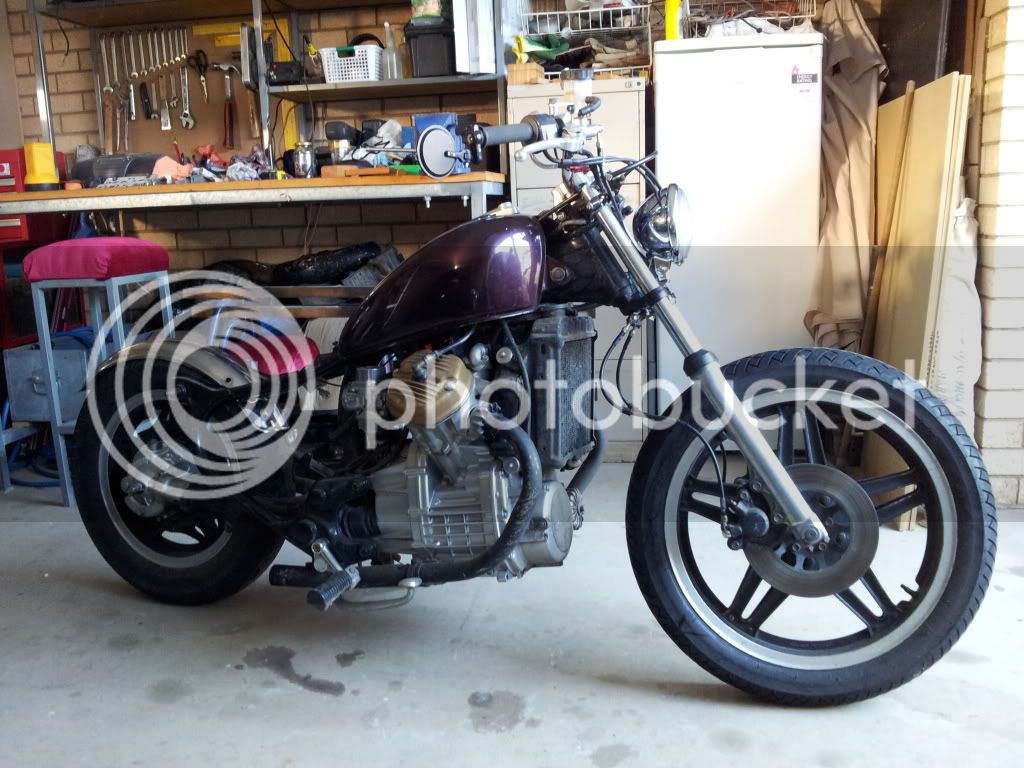