Hmm, thought I had a thread on here already, but not finding it, so starting at the beginning:

I had 3 steetable bikes in the shed (restomod chain-drive, spare parts shaft-drive bike, and a BMW R1100S I've been riding daily) - and enough spare parts to build a 3rd XV. As I'm pondering selling the spare parts bike, my wife decides she'd like to be able to ride with me sometimes. She's taken the MSF basic course - twice. Each time, life has thrown us a curve ball and thwarted the plan to get her a bike.

Now she says that she's interested, but worried now age may be a factor, so suggests a trike. In searching Craigslist for a trike, we see a sidecar rig with a dog in it. Eureka! We had recently put down our 15 year-old Golden Retriever, and we are waiting to be chosen by another dog. So, a sidecar rig it is.

I see an ad for a Vetter Terraplane, and after a little research, decide it is a fine candidate. A few days later: 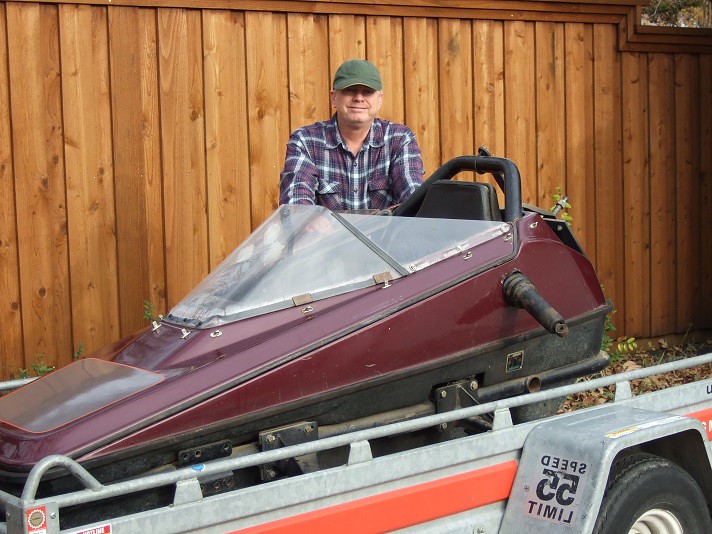 It was in pretty good shape, but the brake hardware was all missing.
So, I stripped it down and verified nothing worse than surface rust. I also find out that original brake parts are unobtanium, so I set about adapting a Virago XV920K wheel and brake. 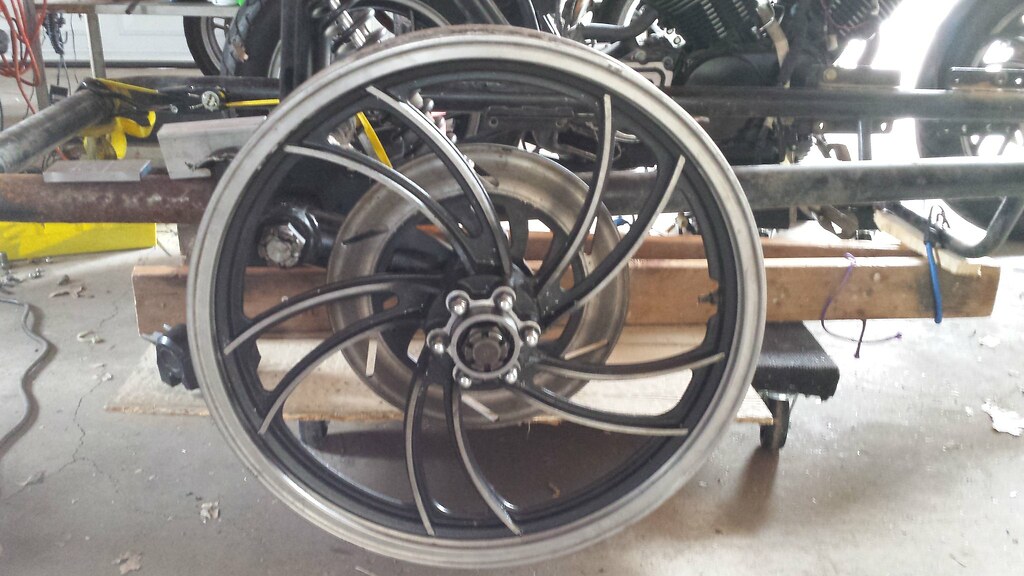 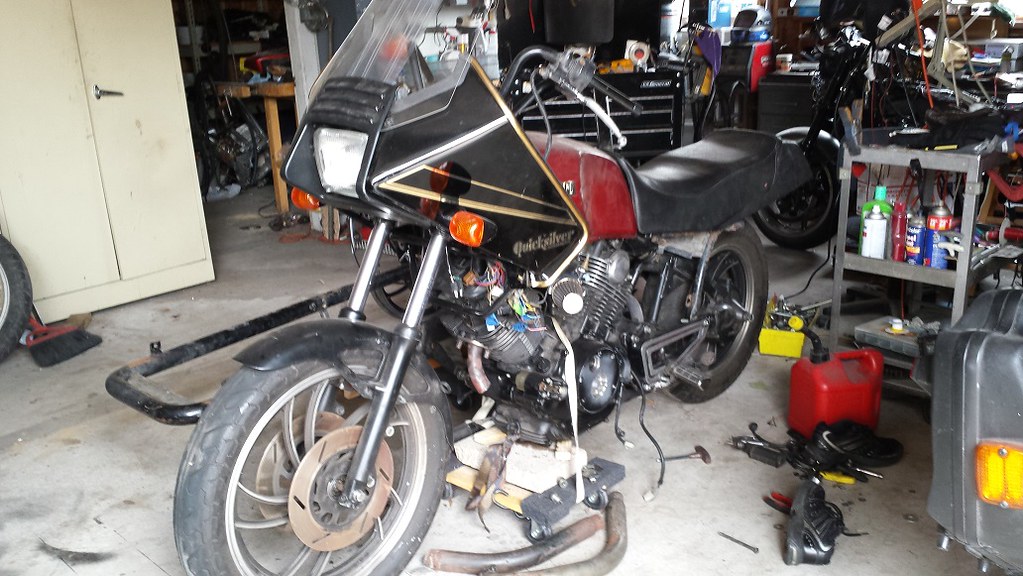 In the meantime, our new monkey arrives: 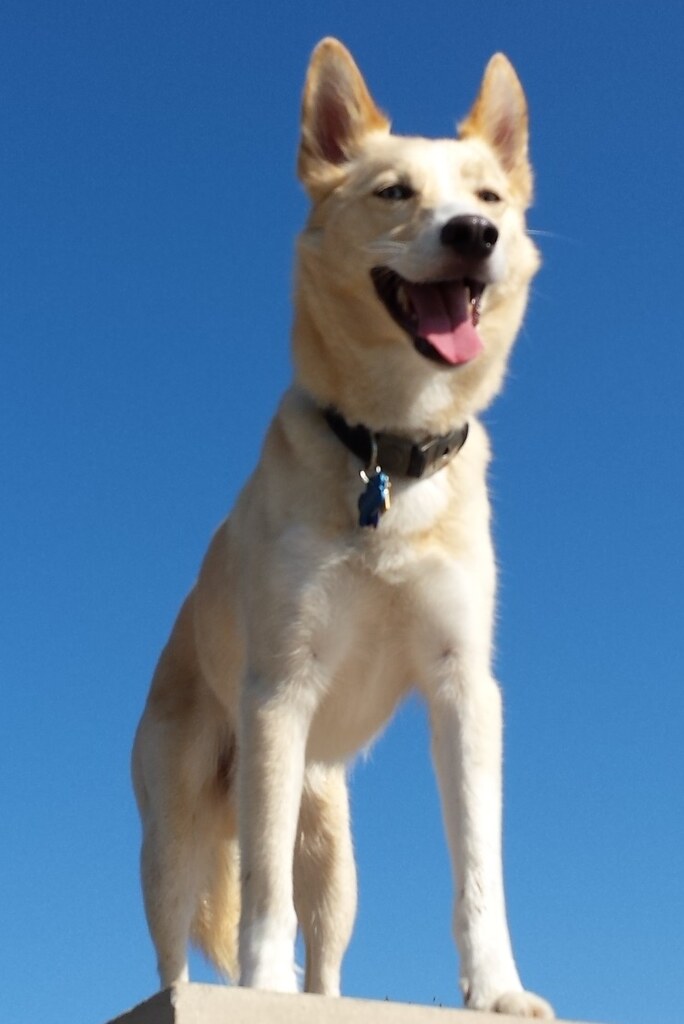 One challenge in Hacking a Virago is the lack of a lower frame. I built a subframe to distribute the sidecar loads to the engine and upper frame. It is not really visible in the photo, but there is a pretty stout tube running below and along side the engine - right where the front header normally goes. This required relocating the front header to the other side. 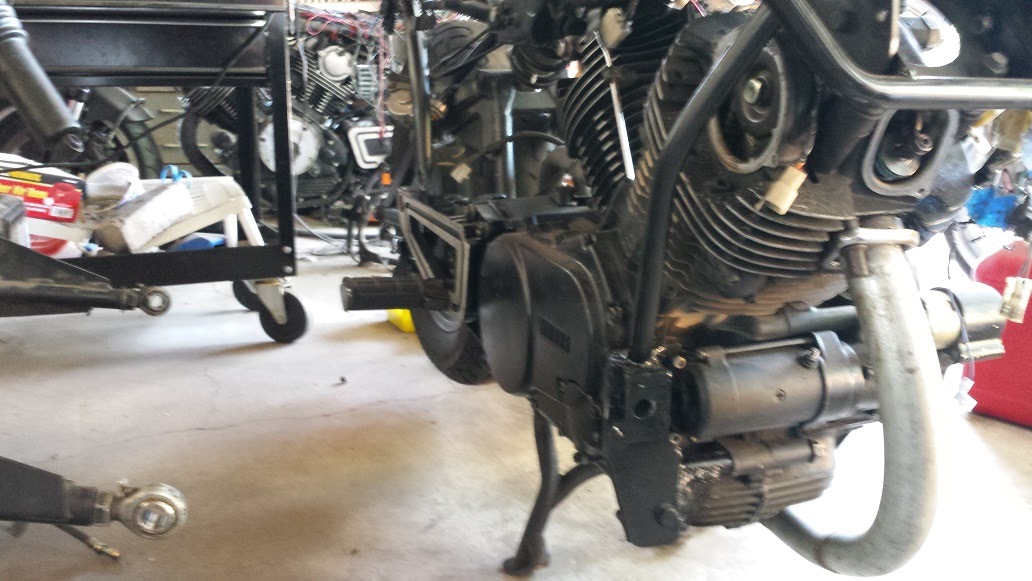 I did run this configuration for a short time, but quickly decided that the header tube was hanging too much in harm's way. I couldn't tuck it up against the engine because it would block the oil drain plug. So, subframe Mk II was born: 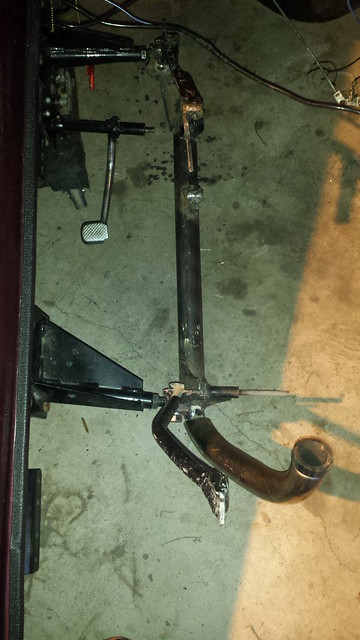 The fact that the header and subframe wanted the same real estate was embraced, and the exhaust run through a thin wall tube concentrically inside the heavy DOM structural tube. It worked out fairly well. 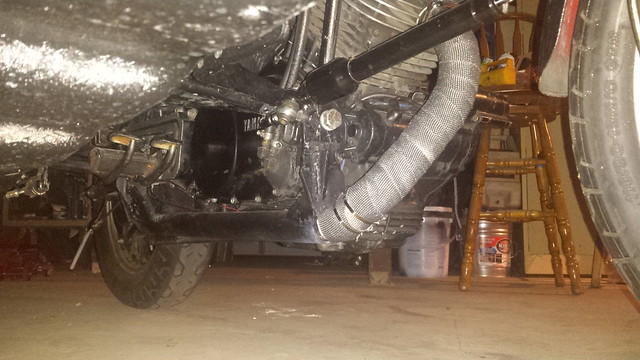 Braking was finished off with a CBR master cylinder and separate pedal next to the rear brake: 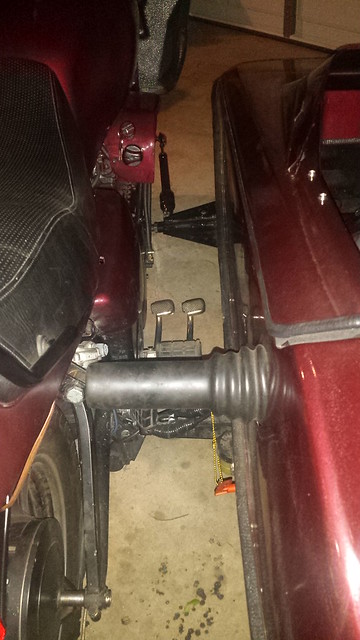 The red lever in the foreground is a master battery disconnect. I deleted the bike battery and put a small car battery behind the hack seat.

Other electrical mods include flush LED lighting, including separate turn signals and a DRL/driving light, all driven by relays locally in the sidecar, so that only low current signals are running through the tugs switchgear. A coat of paint and interior surfaces refreshed, and it was road-ready: 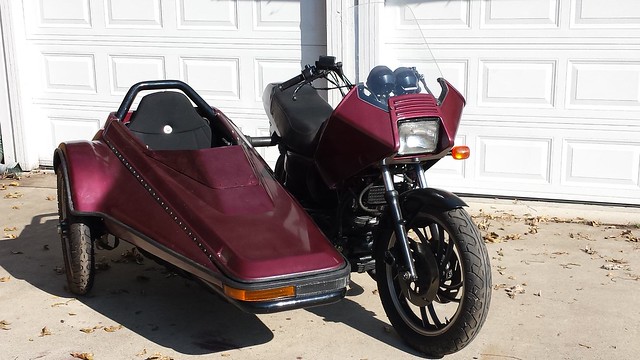 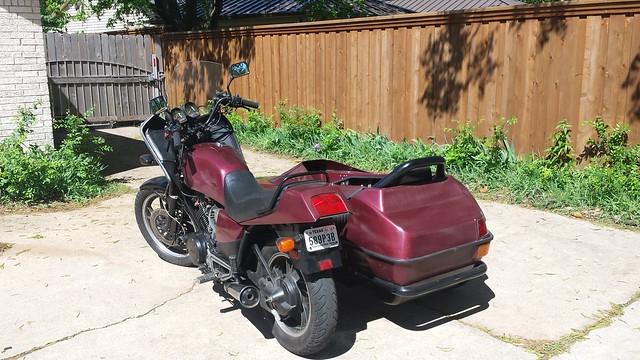 The last major modification was to reduce steering effort so my wife could drive it more easily. I reduced trail by 2 inches, using a 'leading leg adapter': 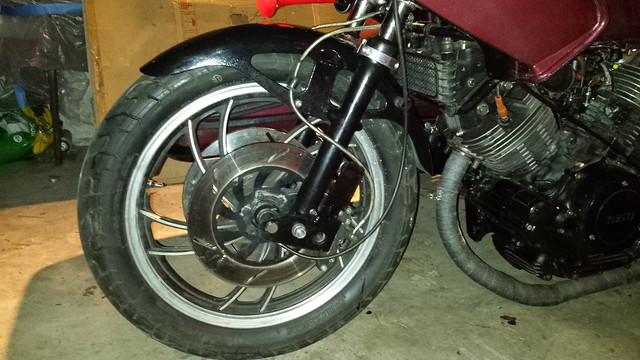 The wife likes it! 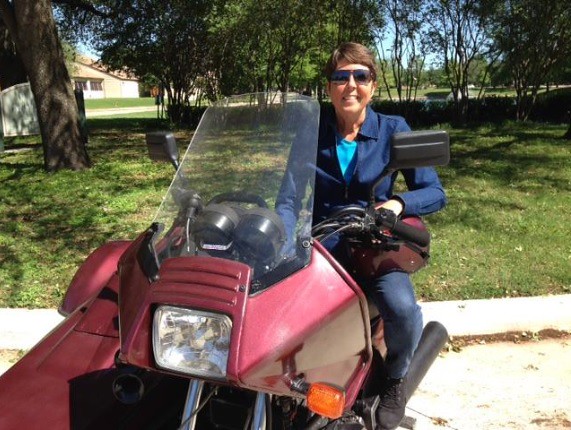 The dog likes it! 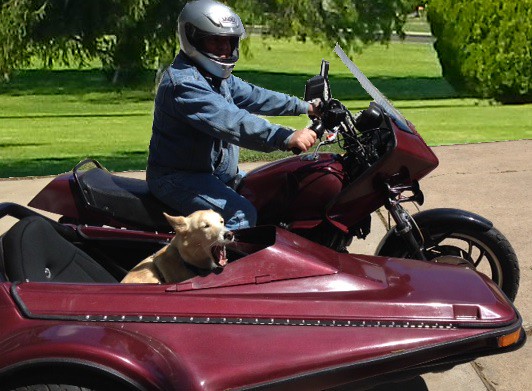 Um Im sorry to be the bearer of bad news, but you have put the side car on the wrong side
Nice outfit..

i thought the only safe side to put a sidecar was down the side of the garage.......

but on a more positive note, good luck to the missus and dog, i'm sure they'l have a ball

Doh! The rat bastards printed the instruction sheet backwards! Back to Ikea it goes!

Thanks, folks. There are plenty of thing about it that could have been done better. Fortunately, most don't show up if you keep the pics small enough At the time, I couldn't be sure either the dog or wife would be interested after their first ride. Pleny of time to tweak on it now that I know we will be using it.

his chair is glued to a hot Le Mans motored guzzi californian, he's taken me for a few rides in it but i don't fit real well to the point that i can't wear shoes or boots, i have to basically fold my feet in half to even get in the bastard thing, and being that close to truck wheels scares the cr4p out of me

I can definitely dig it.

A sidecar rig has been on my short list of projects for the last couple of years.

Thanks. It really would be better if it was about another inch farther forward. Unfortunately, this would put the caliper mounts right in the middle of the fork leg. For the amount of work it would take to relocate the calipers, I think I will just build a leading-link front end. I want to finish the turbo bike first, though.
You must log in or register to reply here.
Share:
Facebook Twitter Reddit Pinterest Tumblr WhatsApp Email Share Link