What model is this Honda?

Any info on this would be appreciated.

I think you forgot the photo. Either that or I'm having issues on my end.

Yeah, the damn photo wont load right. Working on it.

My guess is a 69 superhawk? I need more clarity though.

Do you have this in person can't you somehow look up the vin to tell exactly the model/ year?? I am curious about this process too.

A friend out in Safford sent the pic to me and is wondering about it.
M

Nah, not a dream. Looks like a superhawk. The finned tach cover is throwing me though.

DTT SUPPORTER
Definitely not a Superhawk. I'm not sure it's a Honda at all. The cover on the side of the engine (right above the plug) doesn't look like any Honda stuff. Honda used pressed steel that was chromed for all those parts on their early models.

DTT SUPPORTER
Looking more closely, I see the seat says, "Honda", so maybe it is one. 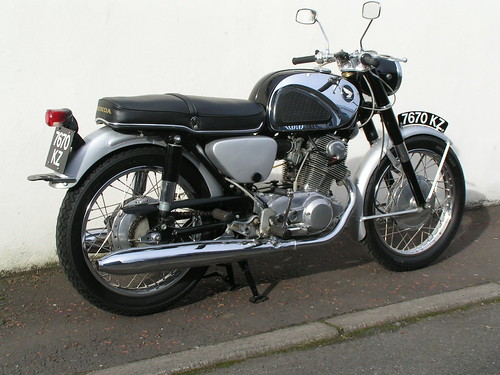 Looks like a lot of differences in the engine though...

Yeah, the CB72 cases look completely different. Plus, look at the location of the starter.

I think you nailed it.

Yep, thinking pj for the win. Nice work team. That was some pretty good group sleuthing.

You guys are awesome! Twinkies for everyone. As always PJ, your the man.

In Japan or the UK it might have been a CB125 (CB93 model code) which looked very similar but had a motor that basically came from the CB/C92. But it's not a 125.

Frame and engine numbers are never an exact match on those bikes, so as long as they are close, it's all good.