Hey, guys. Got my very first motorcycle in a trade. It’s a 1980 CB650C with just over 5k miles. It hasn’t run in quite a while. This is going to be a two phase project. Phase 1: get it operational as soon as possible and cruise around. Phase 2: make it nice, maybe turn into into a sort of scrambler.

The previous owner was the second ever. He wanted to cafe it so he started pulling parts and cutting wires, then lost interest. So far, I’ve installed spark units and sorted out some “custom” wiring that was done.

To do: rebuild front brake system, rebuild carbs, and slap some new tires on it.

My first question revolves around the front turn signals. The rear function as they should, but the front doesn’t. Both bulbs light up with the ignition on. When you turn the switch for the left signal, it cuts out and the right signal kind of pulses, but doesn’t flash. Same for the opposite scenario. Any ideas where to start?

Pic of the night I brought it home. 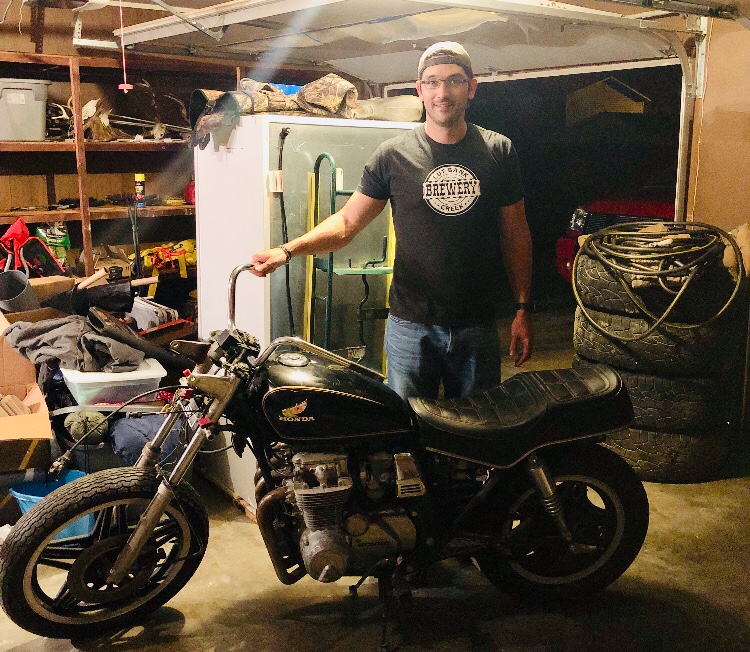 Check for “custom” wiring around the LH handlebar switch. Also, a lot of bikes ran the ground for the TURN lamp on the dash through the other signal bulb, FYI.

Check if the front lights are single or dual element. Some flash the second element. If they wired a single element bulb to the marker lines it will do that. The wires with the faint whit stripe are for marker lights.

pidjones said:
Check if the front lights are single or dual element. Some flash the second element. If they wired a single element bulb to the marker lines it will do that. The wires with the faint whit stripe are for marker lights.
Click to expand...

you should find the wiring pretty simple, blue and orange for the actual indicators and some sort of blue/orange tag/marker for the dim

What others said. fronts are dual filament and wrong bulbs, bad grounds or mismatched wires will cause all sorts of issues. the other thing is it all goes in and out of the headlight bucket so there are multiple connection points to check. Solid orange and solid blue are for flashing and the blue white, orange white are the running lights. I will guess your flasher unit is good if rears flash. Follow the circuits and check all the connections are correct and make sure the bulbs are dual. if not disconnect the running light wires and wire the bulbs/sockets just to the signal circuit and see if they flash.

DTT SUPPORTER
Congrats on the bike mate, and have fun making it your own
C

Thanks for all the replies! I’ll post back when I take another stab at diagnosing.
C

Update: Got all of the lights working. The issue was....drum roll please...a loose ground. There is a little spade inside the headlight housing that needed a ground wire. Doh!