What we have here is a dirt cheap test bed for trying out two-stroke modifications and a great little toy for the track for sessions between the big bikes.

I originally picked up this Zuma for $300 with faulty petcock and no registration.
Fast forward a year or so and I've had a number of track days, a lot of smiles, and a lot of fun learning and modifying along the way.
This first post is a dump of a lot of details, after this, updates will make more sense.

(the middle scoot is the one we're talking about in this thread. See 'Yamaha DT3 - Small Garage, Large Ambition" in Projects -> Trackers , for the DT3 build.)

Early days of the Zuma 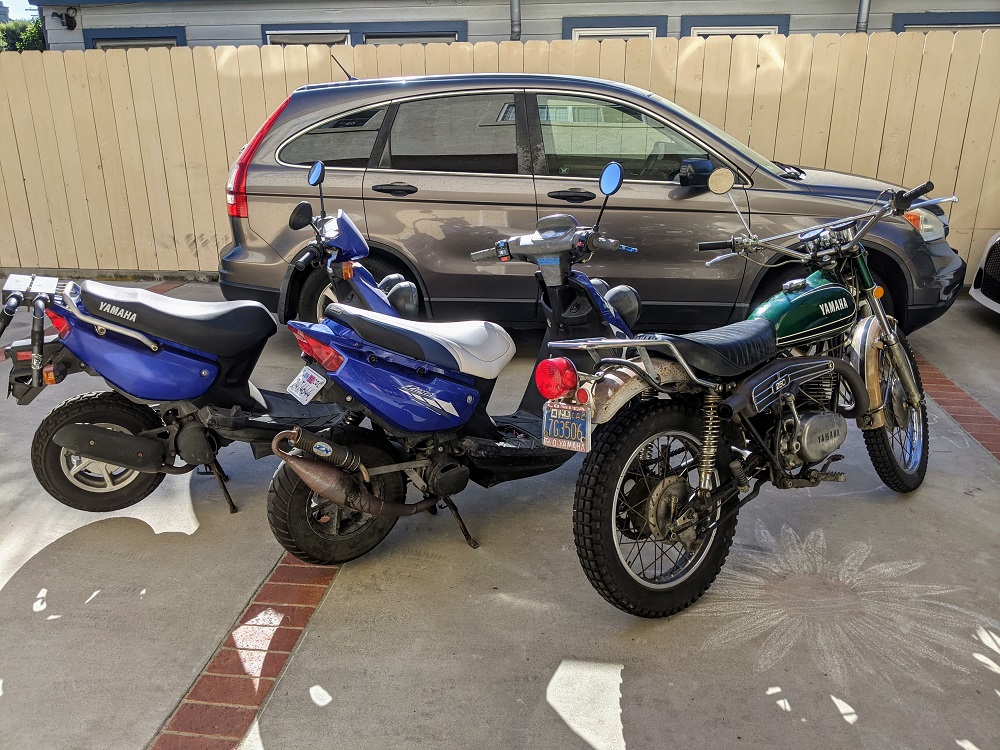 First attempt at the idea of a 'side bleed' exhaust. I modified the LeoVince ZX it came with. Tested the concept-> Worked well -> Improved later for packaging 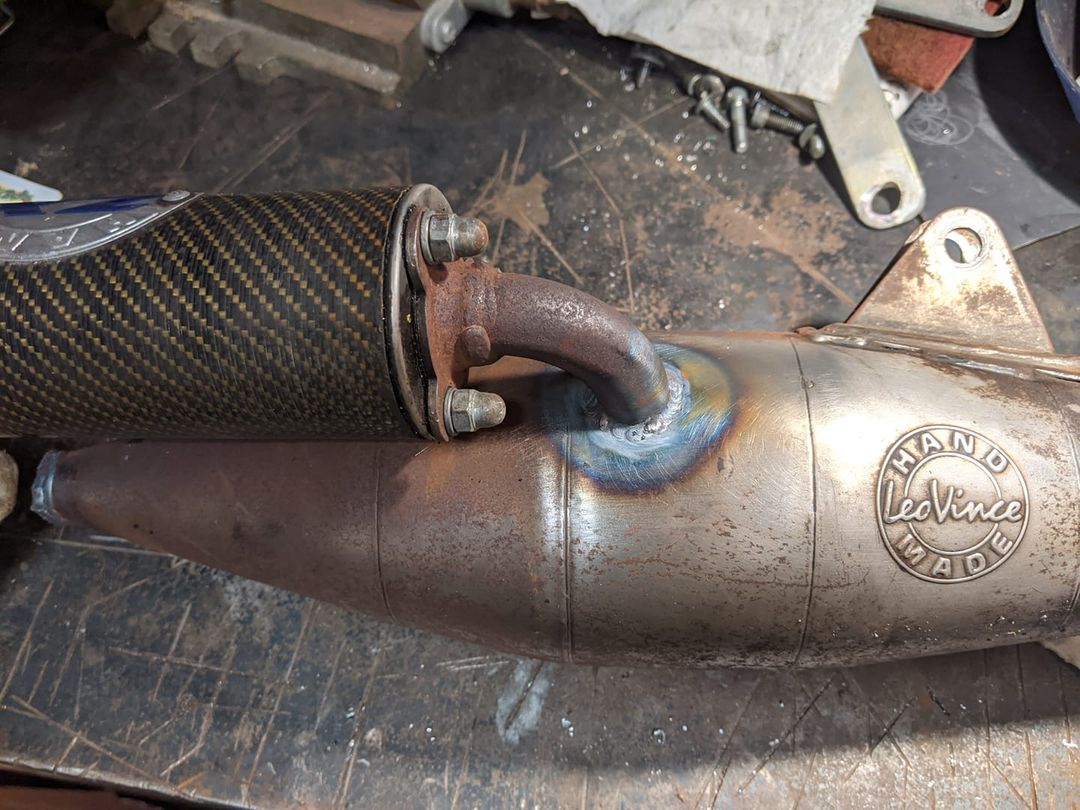 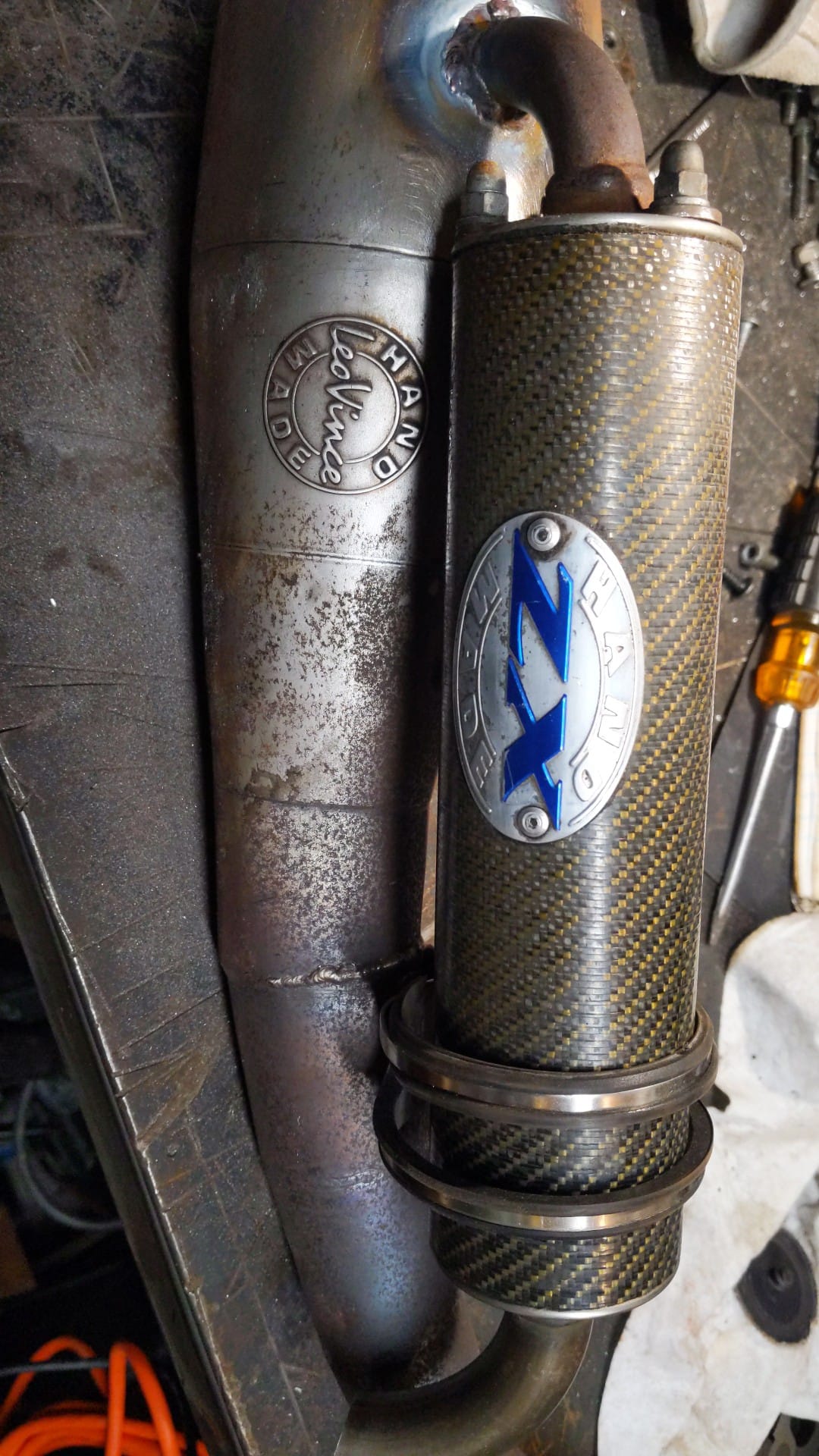 Cleaned it up with some better paint: 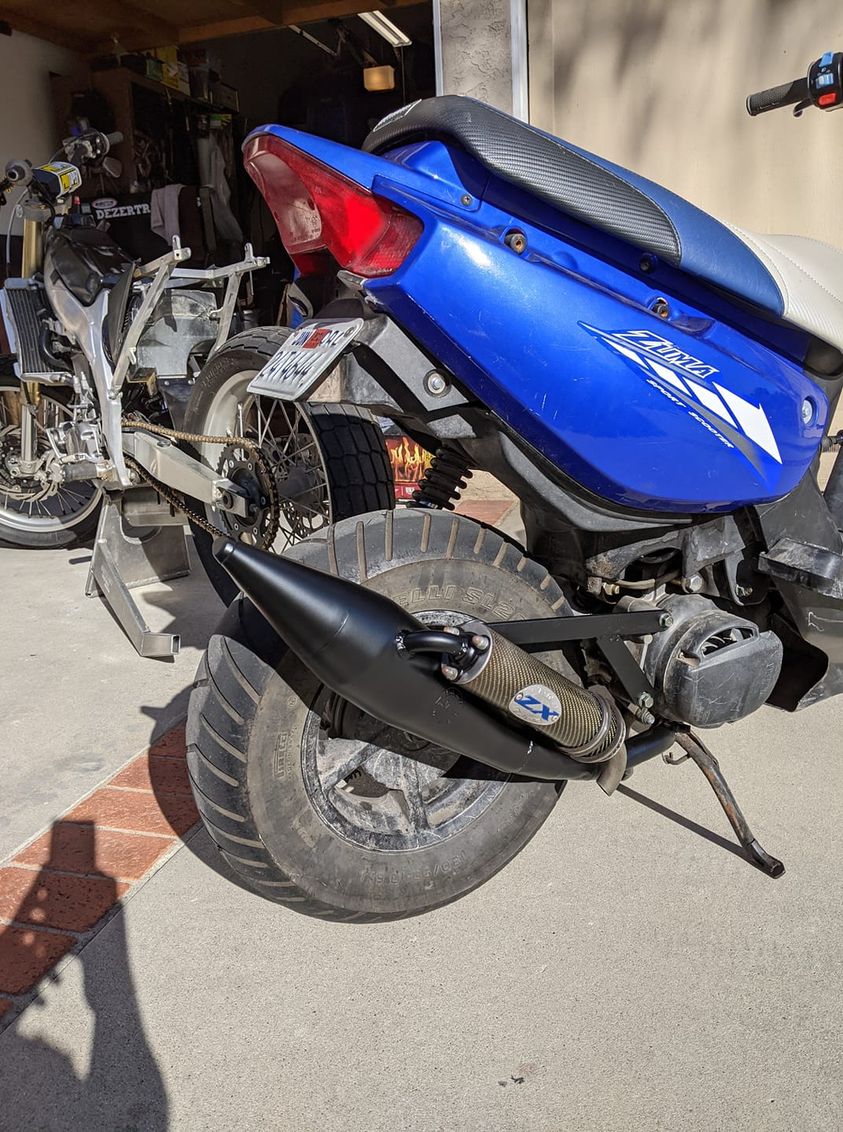 Hit the track for some baseline settings before getting into the cylinder. Ended up dropping CVT roller weights down to 4.5g per roller, added a .020shim to the drive bushing spacing to get a little higher engagement RPM as well.
Worked very very well after a number of CVT tuning sessions. I can get it up to 9940rpm, but it's happy place was 7800-9100rpm. The new goal is to get it operating above 11k, just because.

Side note: These old tires are very very hard and slick. They don't take heat when riding, and they don't hook up. I can't tell you how many times I almost lost it when the front folded under pushing through the corners. Definitely working on tires and suspension after the engine is dialed.
Side-Side-note: I know it's a tire and not-just-suspension issue because I use a durometer and the front measured in at 68A !
For reference, most bikes in the paddock were 45-55a. 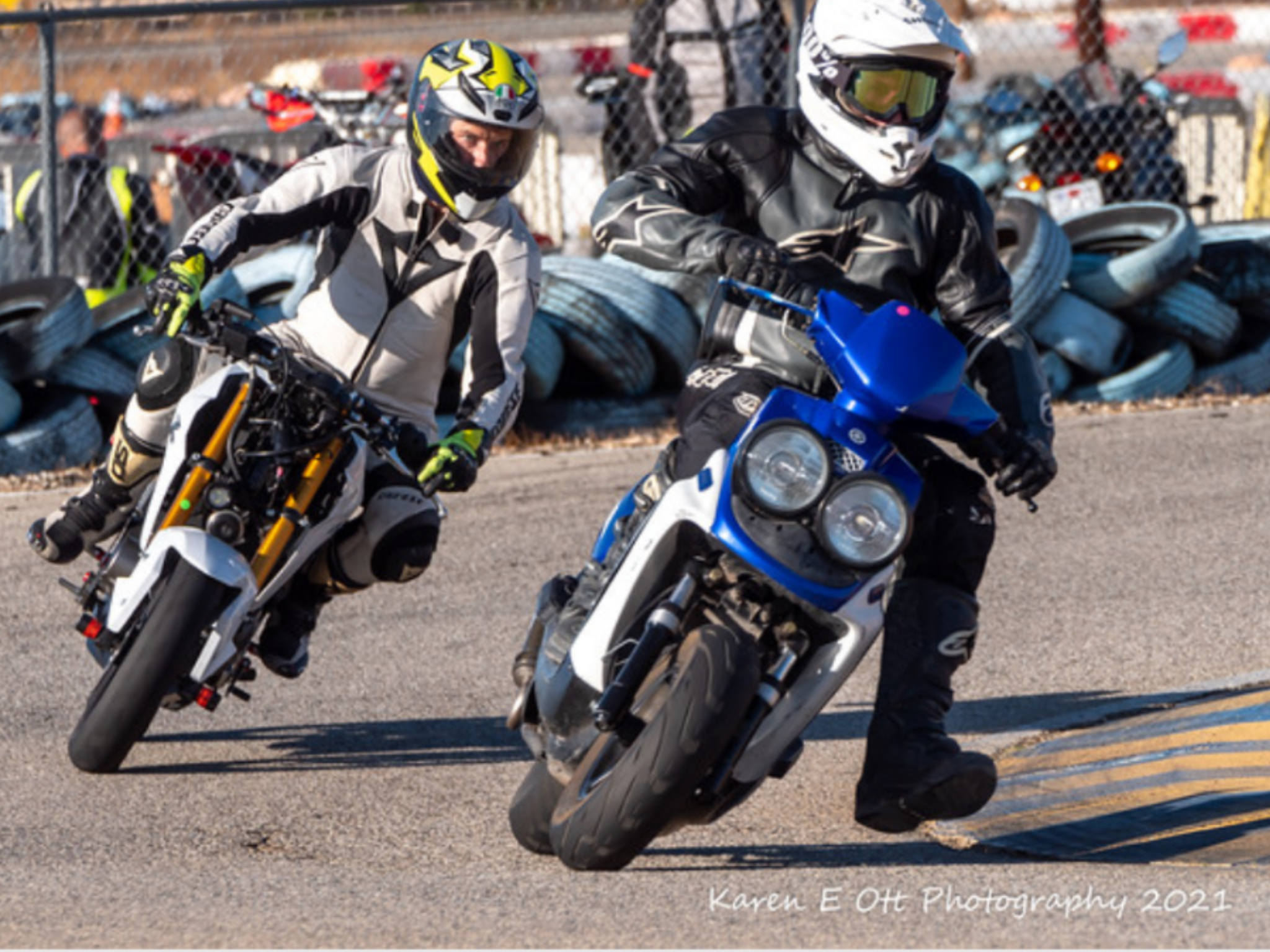 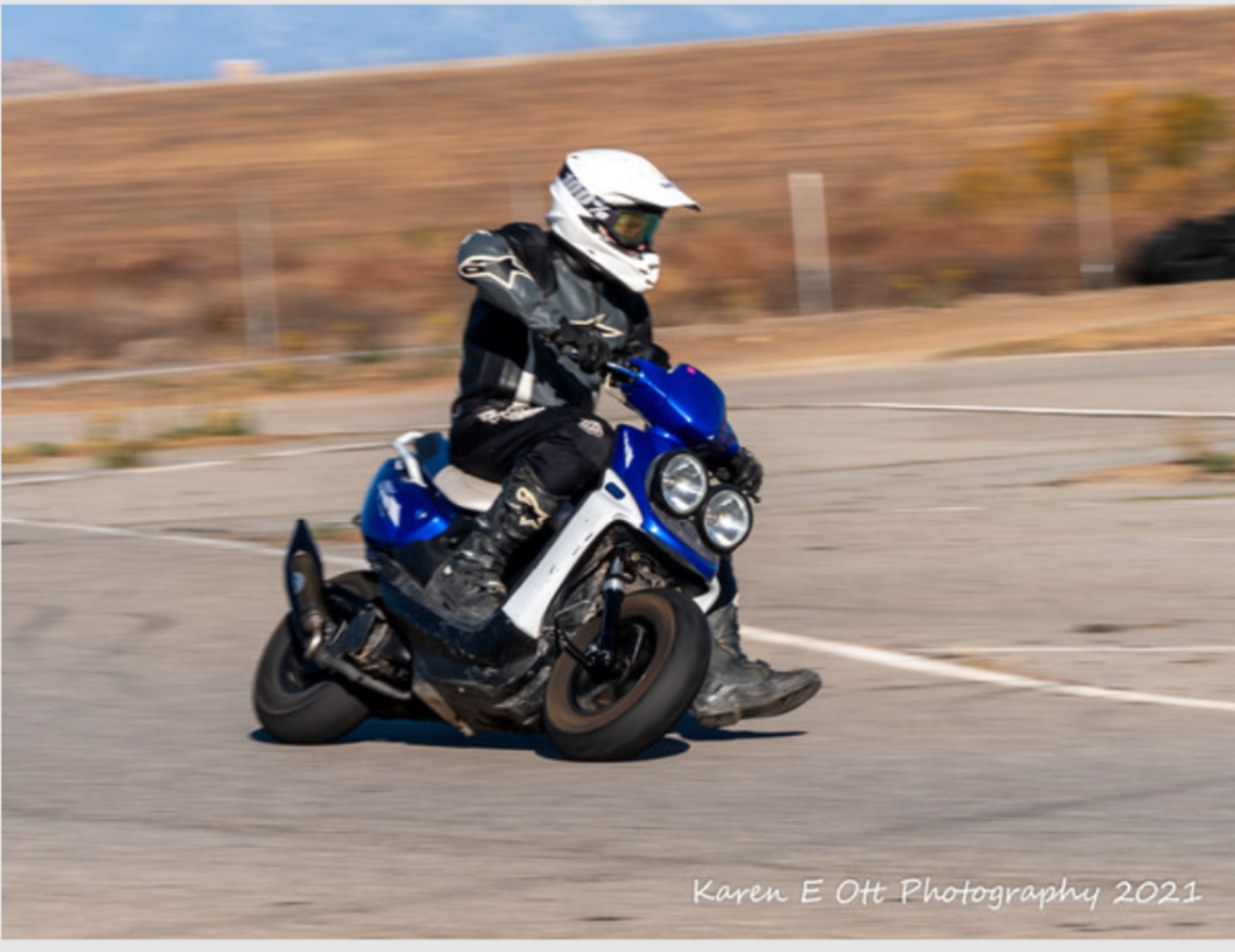 After all that, I really dove into the motor.
Started looking to open her up and found a number of areas for improvement. I started with a general clean-up of the cylinder ports and de-restricted the intake boot. That help marginally, so I knew the pipe was holding me back. Following Alexander Bell's book, I opted to build my own exhaust (really to help dial in my ideas and execution before the DT3 pipe), and I learned a ton along the way. I also opened up the exhaust port more to help match the new pipe. 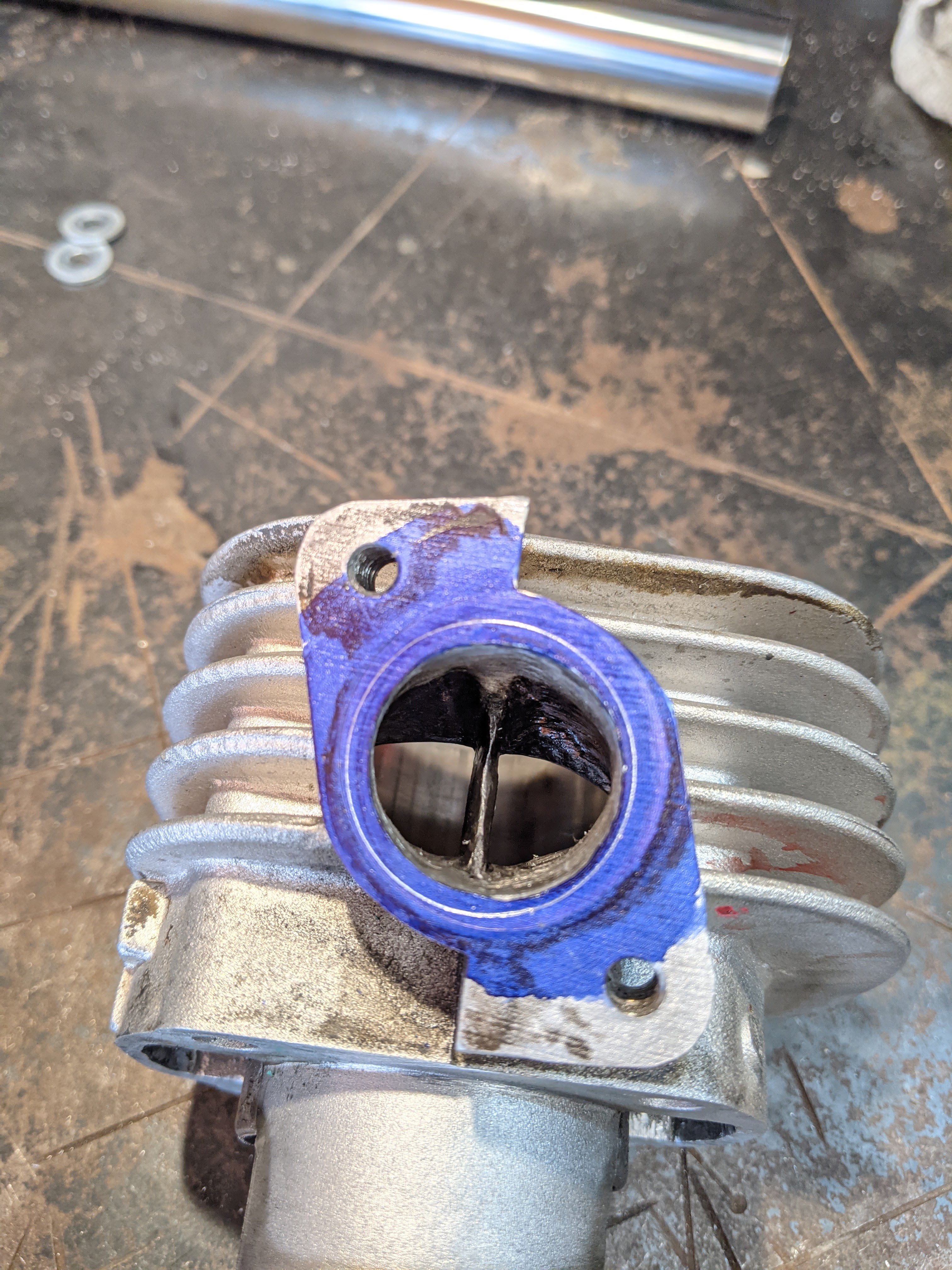 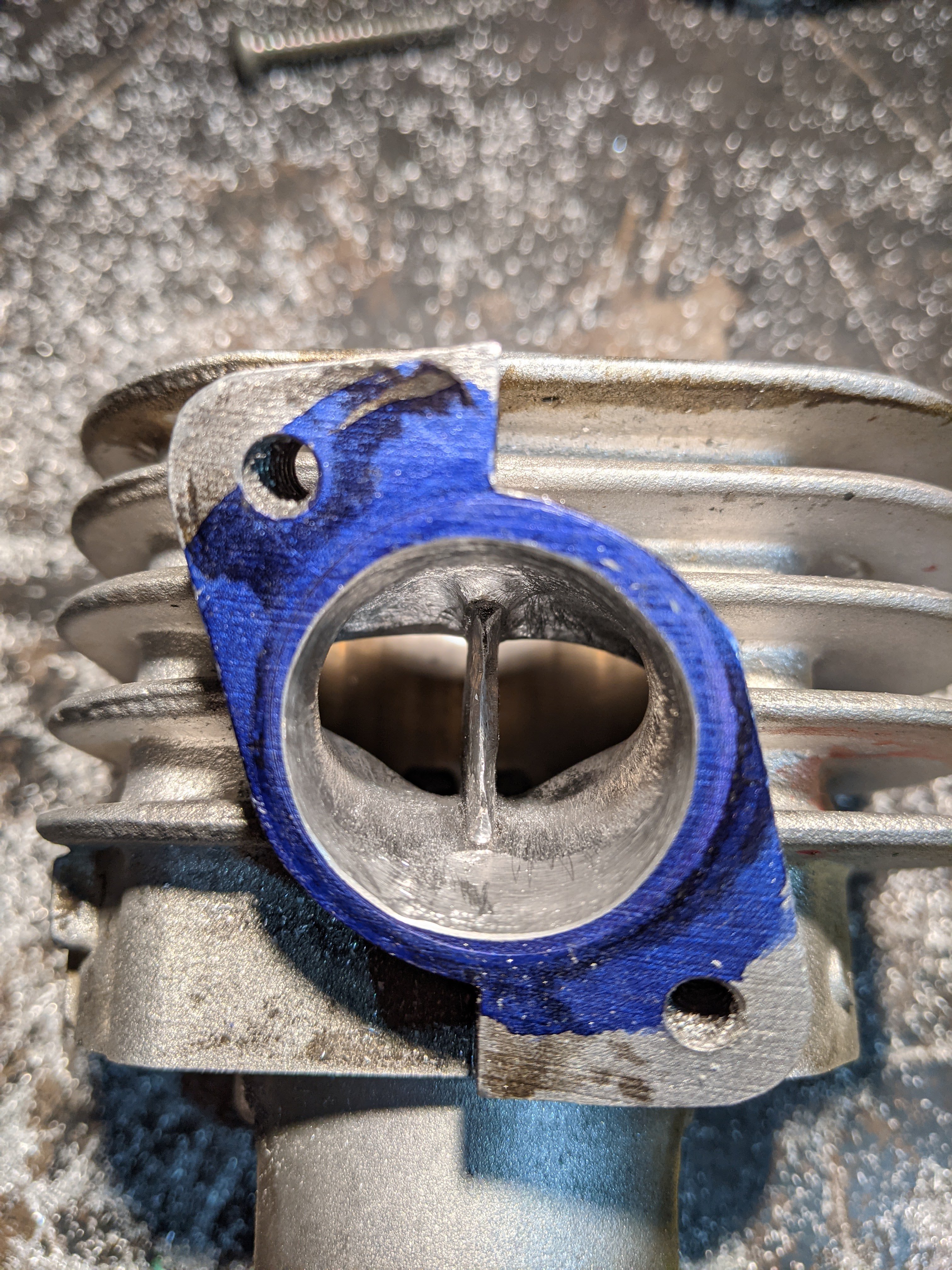 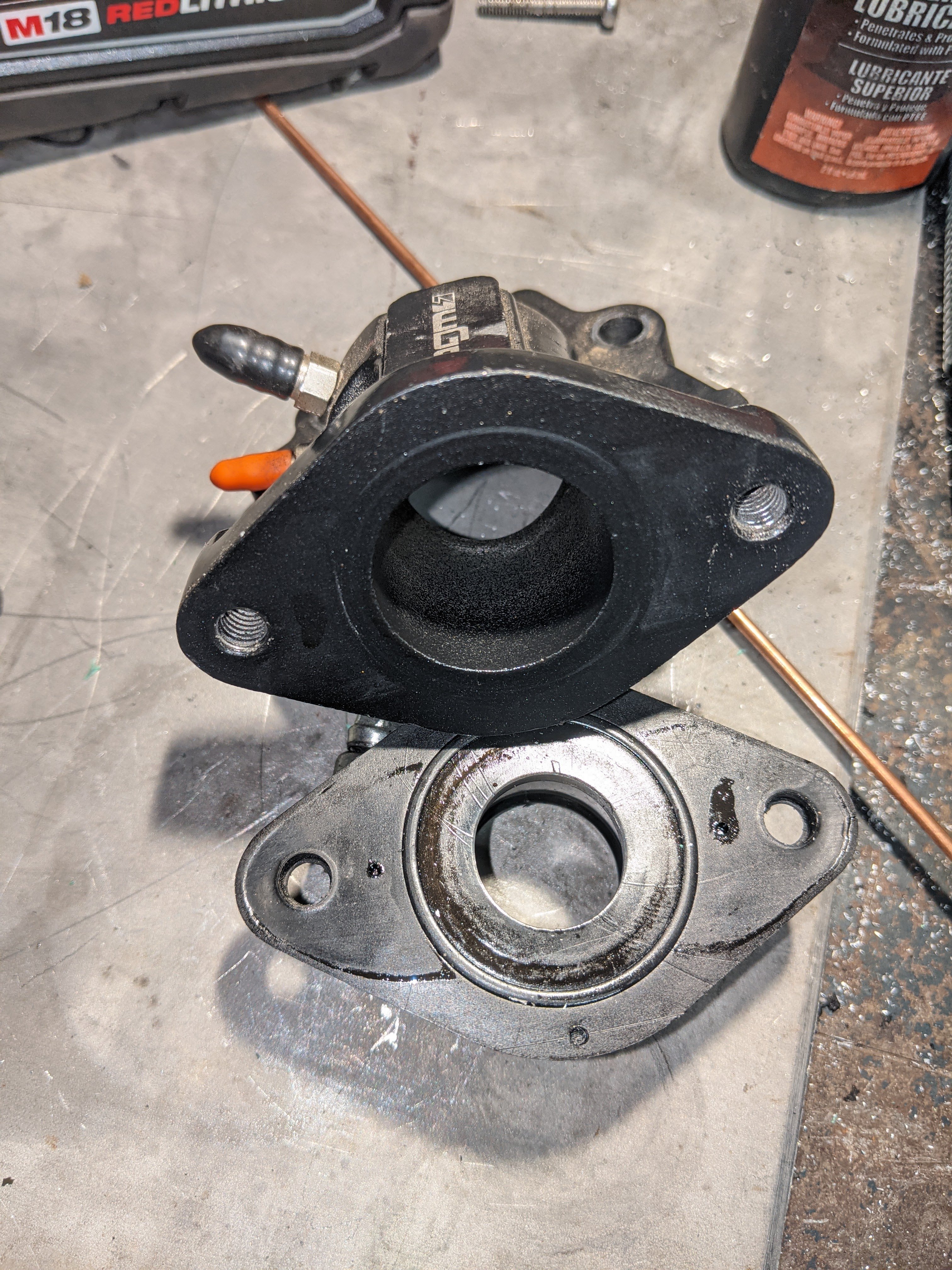 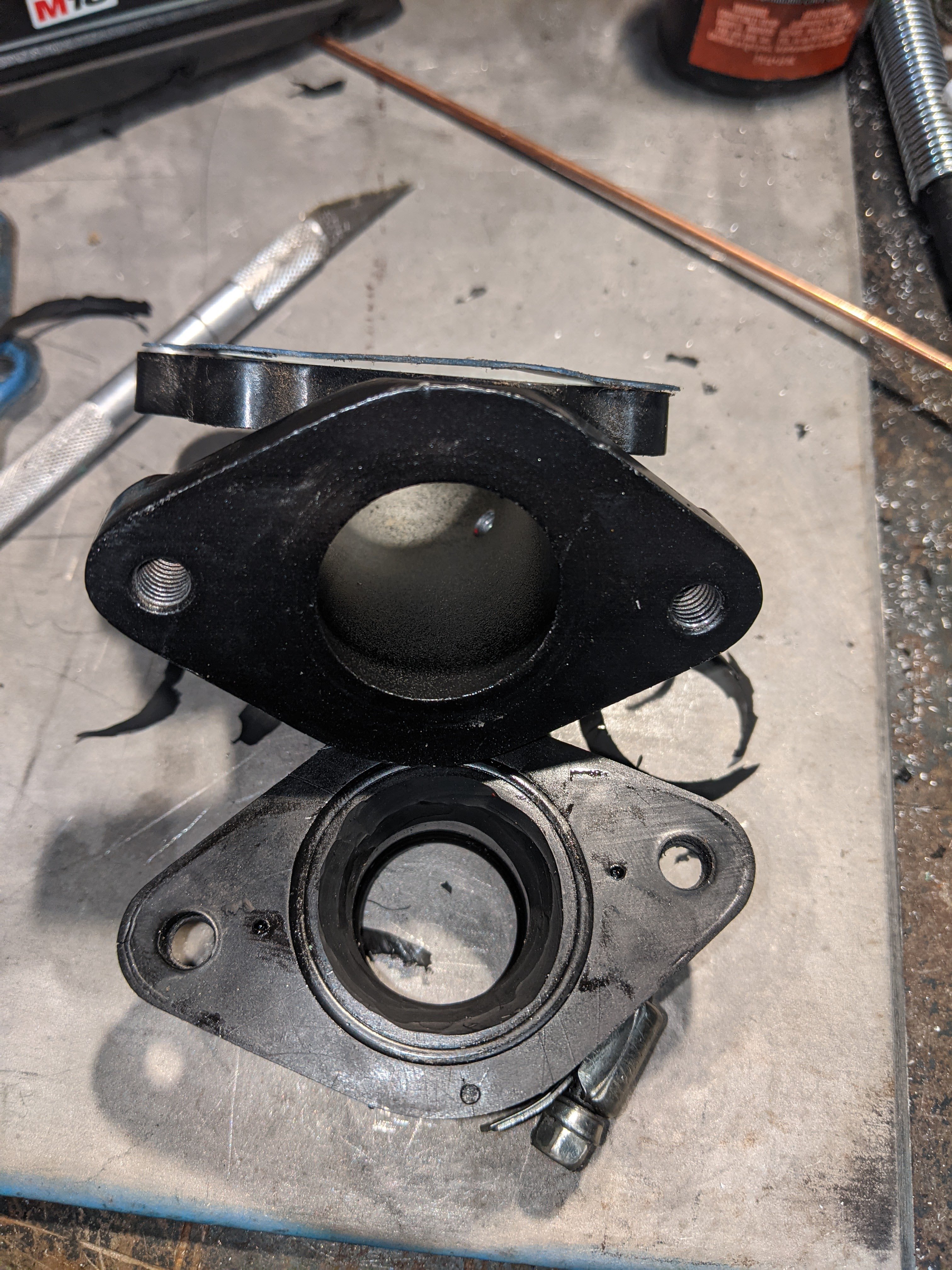 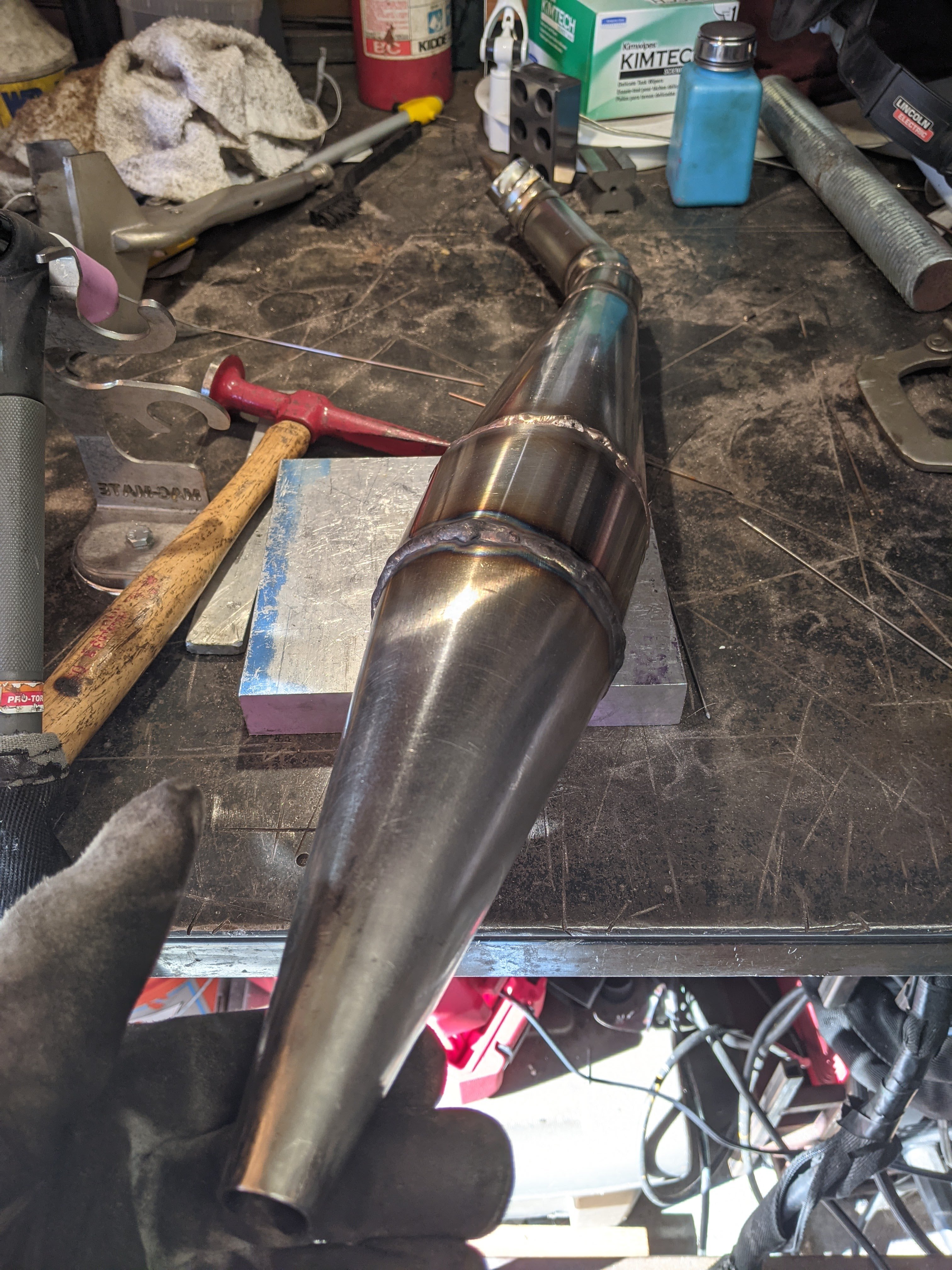 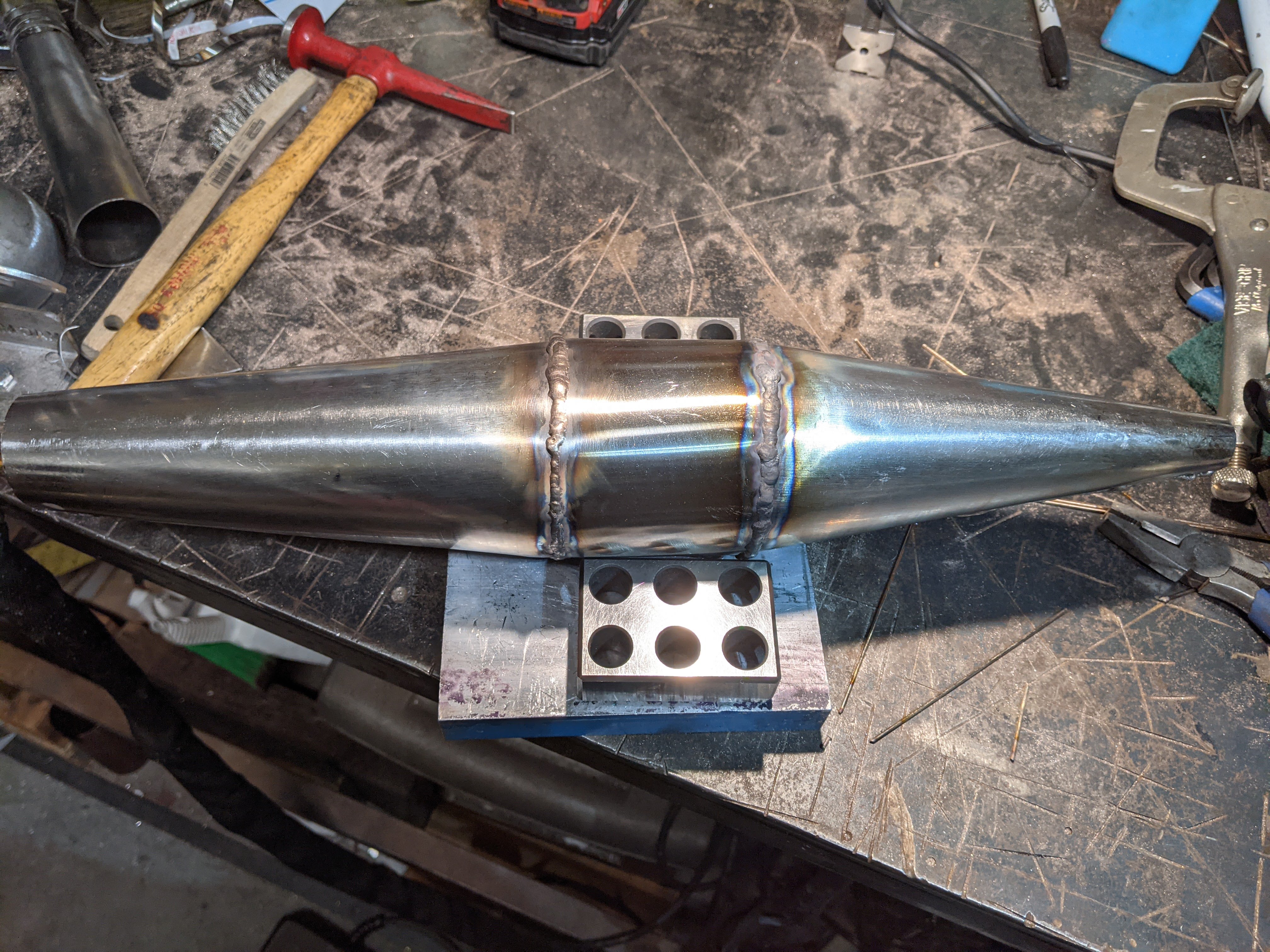 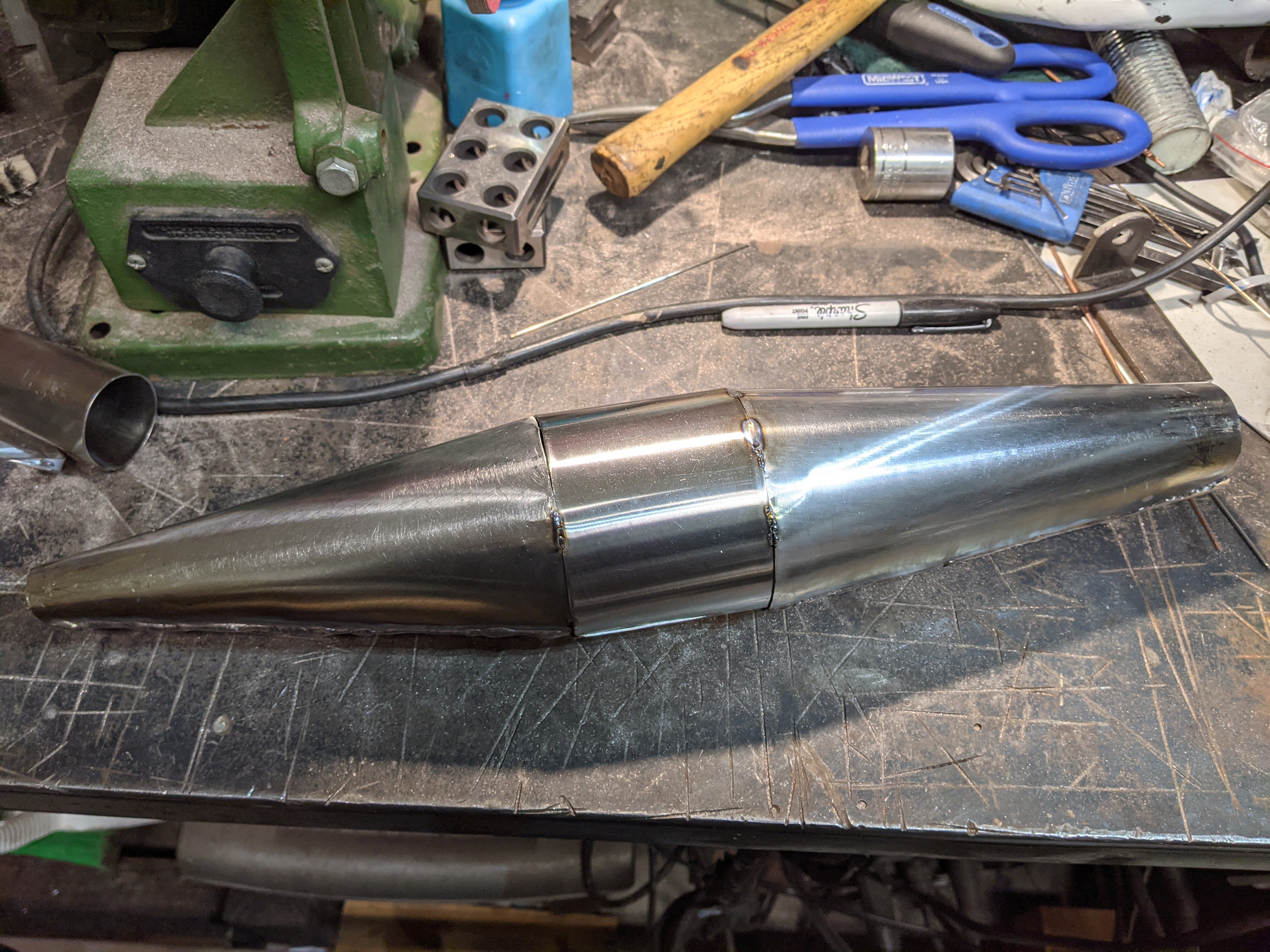 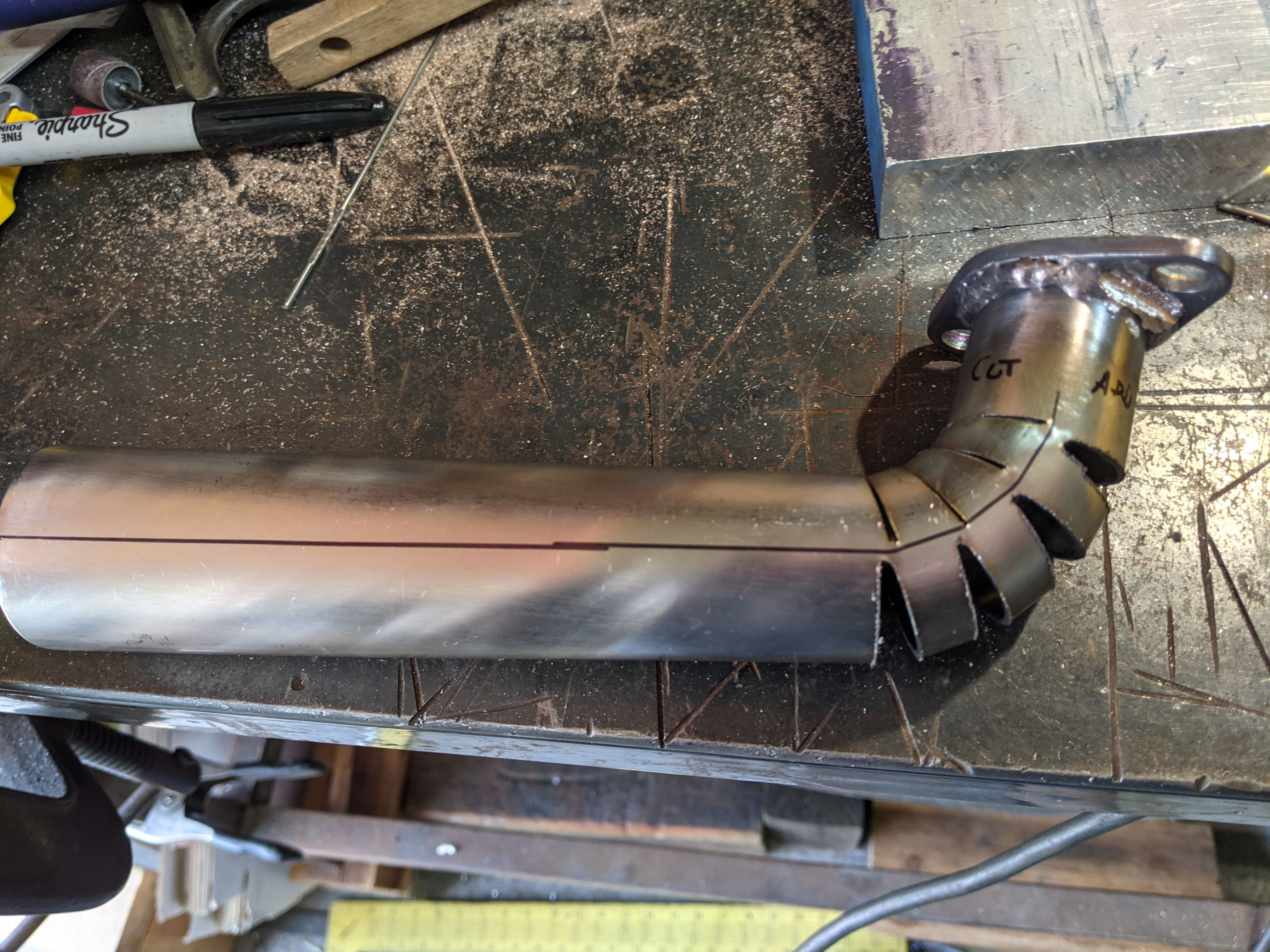 I've learned some things as I tried this attempt with silicon bronze.

1.) Slip rollers can make partial cones - but it's a mutha f**ka to get a tight radius cone on 1 end and large on the other. (1" roller targeting 1.5" semi closure is about all I'd expect)
2.) Silicon bronze is not for butt welding. Period.
2.1.) Silicon bronze is man's best friend one moment, then turns around and shits on your carpet the next
3.) A friend, Mitch Nunes advice: - filler diameter should be close to the thickness you're welding. I used to think this was 'nice to have' but more and more I'm realizing I've been using whatever I had at the ready and it's been doing me dirty.
3.1) 20ga stainless but welds rather nice on a tig machine using .023 mig wire, (20amps, .7 PPSwith)
4.) The tuning book I have is recommends you cut one side and add to the other for bends, but you don't change the centerline distance. The hell with that business - too much unnecessary work. Instead, it's better to spend the time to figure out how much angle and how many cuts you need, then just add the cut material to the start length and make a single cut on an angle, then rotate the pieces to get the desired affect.
5.) Limited patience shows in parenting and quality of weld.


All this comes on the heals of trying to determine how I want to build the pipe for my DT3 Yamaha. I figured I'd use the scooter for testing all sorts of stuff, so I set out to design and build the exhaust for that first.
The DT3 color scheme will end up navy and gold, with the same design(esq) as the factory paint. I wanted to get more of a gold accent on pieces of the pipe, but it's apparent that isn't in the cards. The bronze just isn't the way to do pipes past the header flange. Lesson learned.
In 2-stroke pipe building, some aspect are easier than expected, others are harder. Getting the header cuts to hit the angles I wanted were actually pretty easy. Getting a cone to taper 6.5 deg on a 3-roll slip roller is not.

Pipe calcs (note; calculation does not equal execution. I lost some volume and length in fabrication. Target RPM may not match what I was hoping for...oops)

DTT BOTM WINNER
Following along for the lessons. I have so much to learn about two strokes.

I've ridden a scooter twice - one that I rented at the beach, and another that I resurrected for our preacher. Have to hand it to anyone that would track one!

DTT BOTM WINNER
Bell's calculations are a great place to start. To get the curve in a tapered header, it is much easier to use cone generating software and cut the cone into sections which can be rotated to get the desired shape. Better to roll them with a slip roll to make the sections, but if you are careful, you shouldn't lose much length (if any).

This pipe came as a set of rolled but not welded cones that had to be sectioned and rotated. I decided on the angle and how many sections and printed out the sections for each cone, then cut them as carefully as possible and then hot glued it all together. The first few inches were what was left of a set of TZ pipes that were junk except for the flanges.

Nice, signing up to learn, I know enough about 2-Strokes to know I know nothing LOL. I got my son's little 2 stroke Hyosung 50cc to start and run reliable and do just over factory top speed so far and that was a steep curve. If we were keeping it round 2 would be pipes/rollers/porting/new jug etc. but we got the CB125 so the Scooter will likely get sold off to pay for parts and insurance on that.

teazer said:
Bell's calculations are a great place to start. To get the curve in a tapered header, it is much easier to use cone generating software and cut the cone into sections which can be rotated to get the desired shape. Better to roll them with a slip roll to make the sections, but if you are careful, you shouldn't lose much length (if any).
Click to expand...

What software have you tried and/or would you recommend?

DTT BOTM WINNER
Bimotion has a good pipe design app and MOTA has both a pipe design module and a pipe cone generator that makes it easy to "bend" a cone.

MOTA is a simulation tool and it is really good and moderately priced. EngMod2T is higher priced with even more functionality.

Scooters are loads of fun, I've toyed with the idea of installing an RD 250 engine. 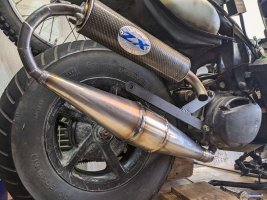 Exhaust is getting close to finish.
Quickly adapted the original silencer I had and did a clearance check. Should be able to fire it up today!

I never updated this!?!
That pipe was aweful. The peak RPM was WAAAY too high and as a result, I couldn't get the engine to climb into it's useable RPM range...it just didn't have the torque to get there. The next iteration of the pipe will be a bit larger diameter in the belly, shorter/sharper on the reflecting cone, and similar on the expansion cone. In the meantime, I put the leovince zx pipe back on an tuned it for a good time.

Fast forward many months - I just soft seized the piston on a very hot southern Californian day.
I'm still on the stock oiler and I fear it's not enough for what I'm asking of this cylinder. The cylinder wasn't damaged (I don't think so anyway) by this soft-seize, so I'm going to clean up the piston, slap a new ring in her and keep giving it the beans until we see a truly spectacular event 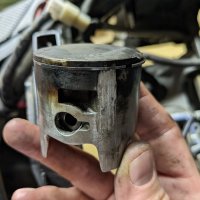 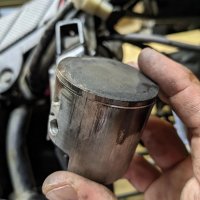 Welp, I thought I had some replacement rings but turned out they were 2.0mm instead of the 1.5mm I needed.
In the true spirit of this scooter's "go crazy for cheap" manta - I use some muriatic acid to clean the aluminum off the nickel coated cylinder, sand papered the ring and piston groove, sanded the piston, and slappped it back together.
I added .3mm base gasket to the existing thickness in hopes of de-tuning the motor a bit while I limp this along for a bit during the summer heat.

She's back up and running again (albeit slower) and I had to downsize the main jet to 100 instead of 105. I also began adding an additional 1oz per gallon of 87octane to aid the auto-lube in hopes of getting some extra runs out of it before I cylinder swap again.
You must log in or register to reply here.
Share:
Facebook Twitter Reddit Pinterest Tumblr WhatsApp Email Share Link