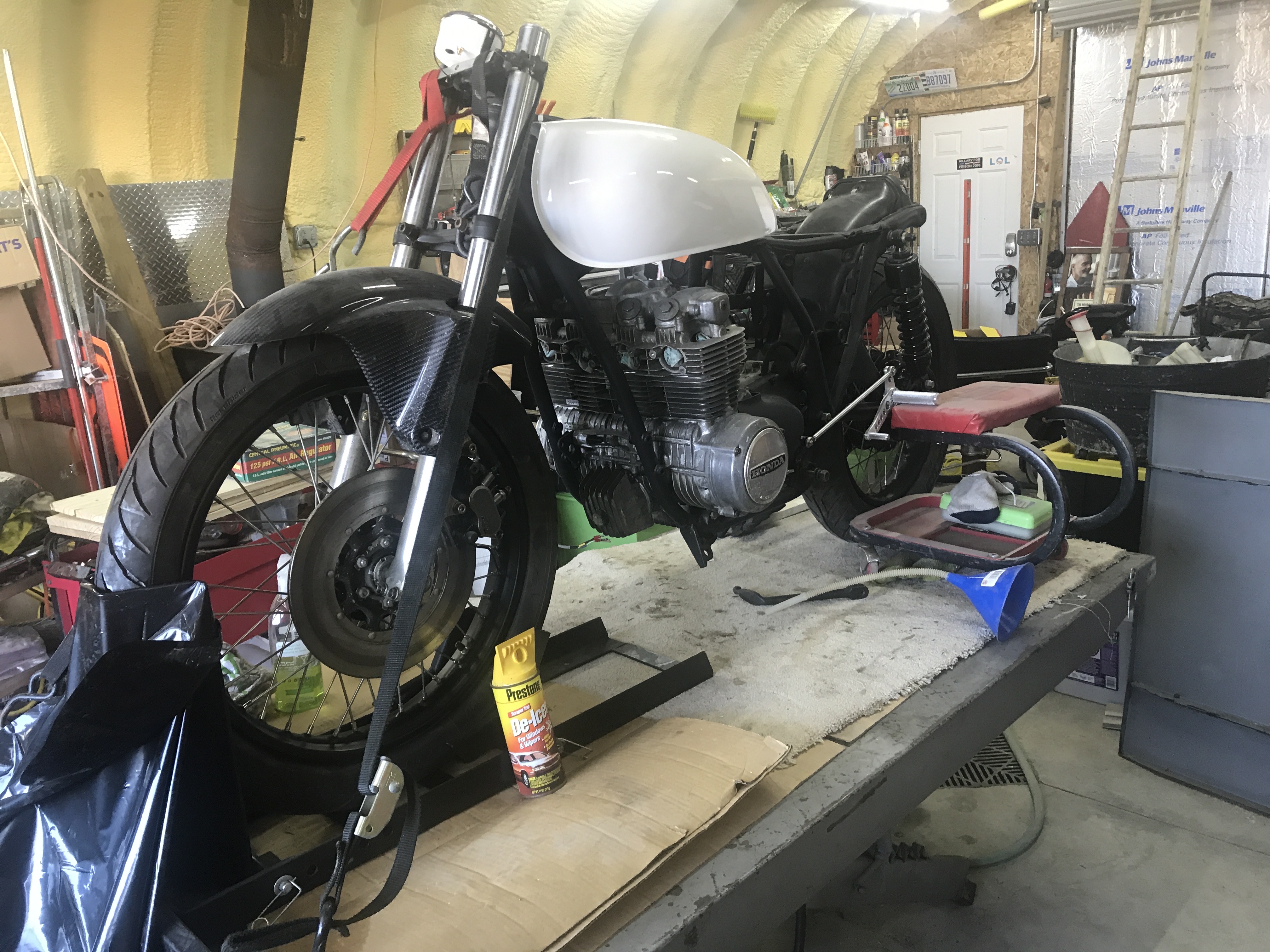 Well progress is progress even if it’s small. Finally moved the bike from the pallet rack to the new (to me) hydraulic stand I acquired.

Sent from my iPhone using a facsimile machine.
D

guys, wassup.... LOL, sorry its been a crazy 18 months. I lost my job during covid last year, opened my own business in Aug and have been busting out 18 hours days like they are normal since... I haven't done crap to the bike. How you see it above in Dec 2019 is how it sits. Mainly b/c of money and frustration. But now that my business is starting to pick up, I have a renewed interest. I have a laundry list of stuff to do. All of which I could have done while the country was in mock-lock-down (i live in the fascist state of Michigan, so we are still not fully open as of Jun 2021). But losing my job and sorting out all that mess was tough and took its toll. But like I said, renewed interest. My buddy brad just finished his 1974 550 minimalist build. I saw it yesterday for the first time. Amazing what it did for my interest in starting on this again.

The mega cab... that was a train wreck. I ended up selling it and luckily I about broke even (lost $400 on the whole ordeal, true numbers so at least it was a total bust.). Last fall, before I got laid off I purchased a new Ram 2500 Crew 4x4 Cummins Tradesman. I will post up some photos later. But it was my dream truck. And luckily, I have been able to make that work even with getting laid off and starting the business.

As for the barn, coming along. Still trashed... LOL. But business and the gym take up 14 hours of my day and i get a few hours each evening. I end up working for an hour after I get home from the gym and then I eat dinner and spend an hour with the wife and then off to bed.
D

couple of things I am looking for, someone sells a set of brand new carbs and I am pretty sure guys on this DTT forum told me about them, CR Carbs? Maybe? Can't find them. ANY info would be helpful. Thanks

I THINK MAYBE it was https://www.dimecitycycles.com/keih...ft-racing-carburetors-fits-cb750-1969-76.html

Ok. Gotta little motivation this weekend and I bought some stuff. Ordered an anti-grav li-on battery, the motogadget m-unit blue, led headlight, headlight bucket and new rectifier. Time to get some shit done.