irk miller said:
Thanks for recording that story in here, Levi.

You do some great work man; I really enjoy following your builds. That tank repair was impressive.

The bike in the first picture appears to be a Yamaha TD1C and the second one is an early TZ750 (700cc) with twin shocks and flat sided chambers. 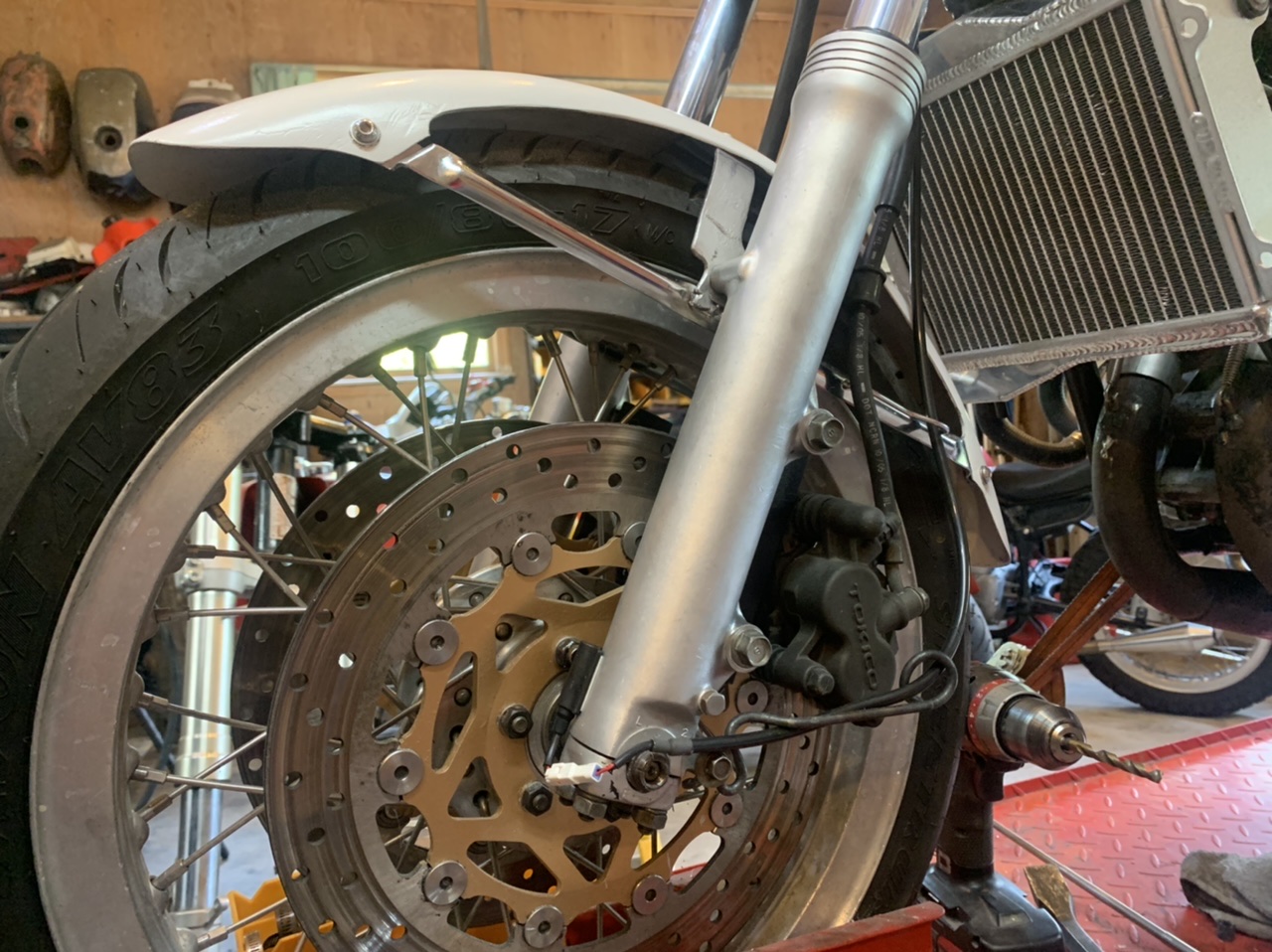 Big brakes and a nice rad in that pic! Fender looks good too.

DTT BOTM WINNER
I had enough original labels on the expansion pipes under years of paint to piece together a complete image. I made a couple replacements. 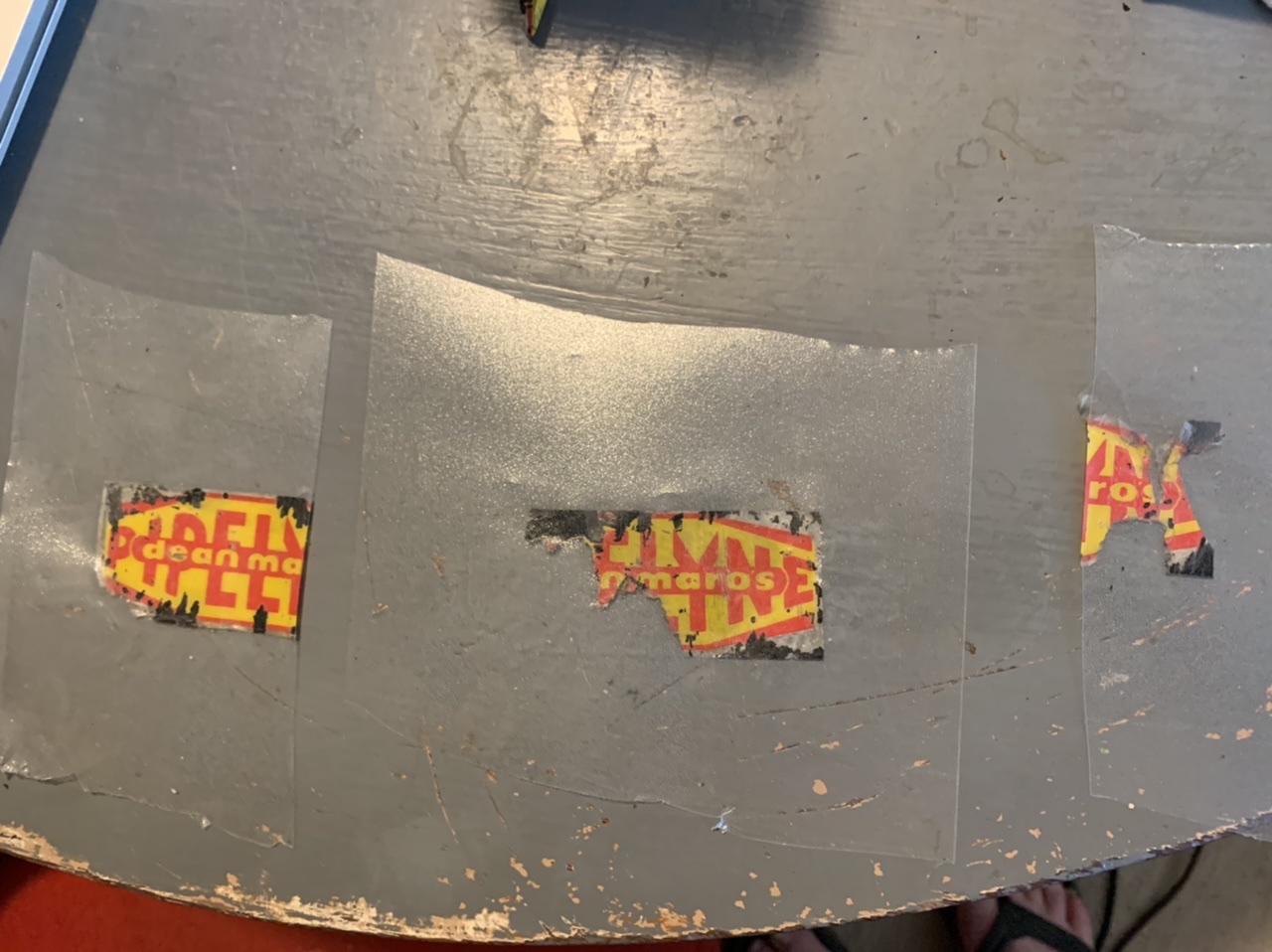 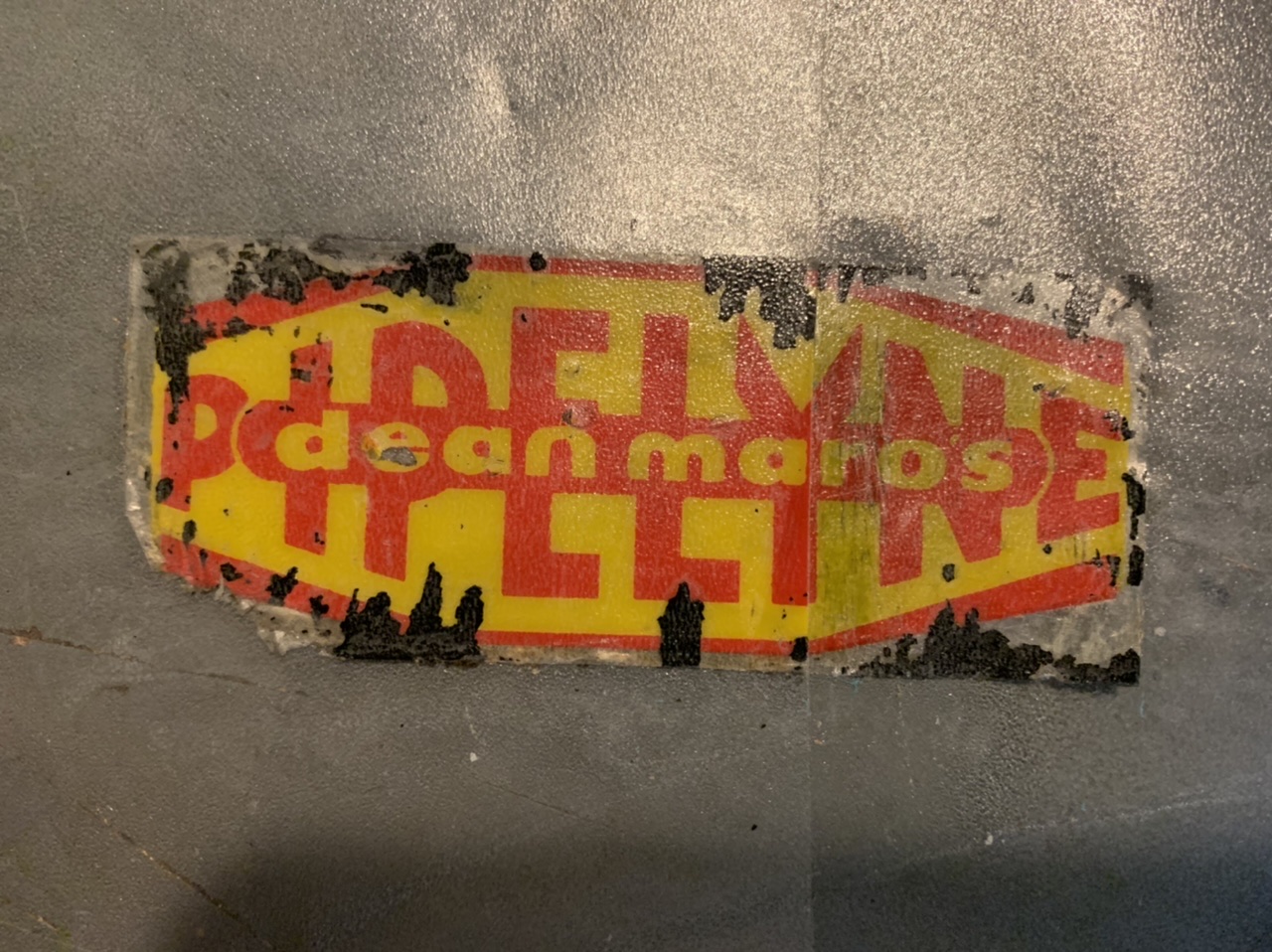 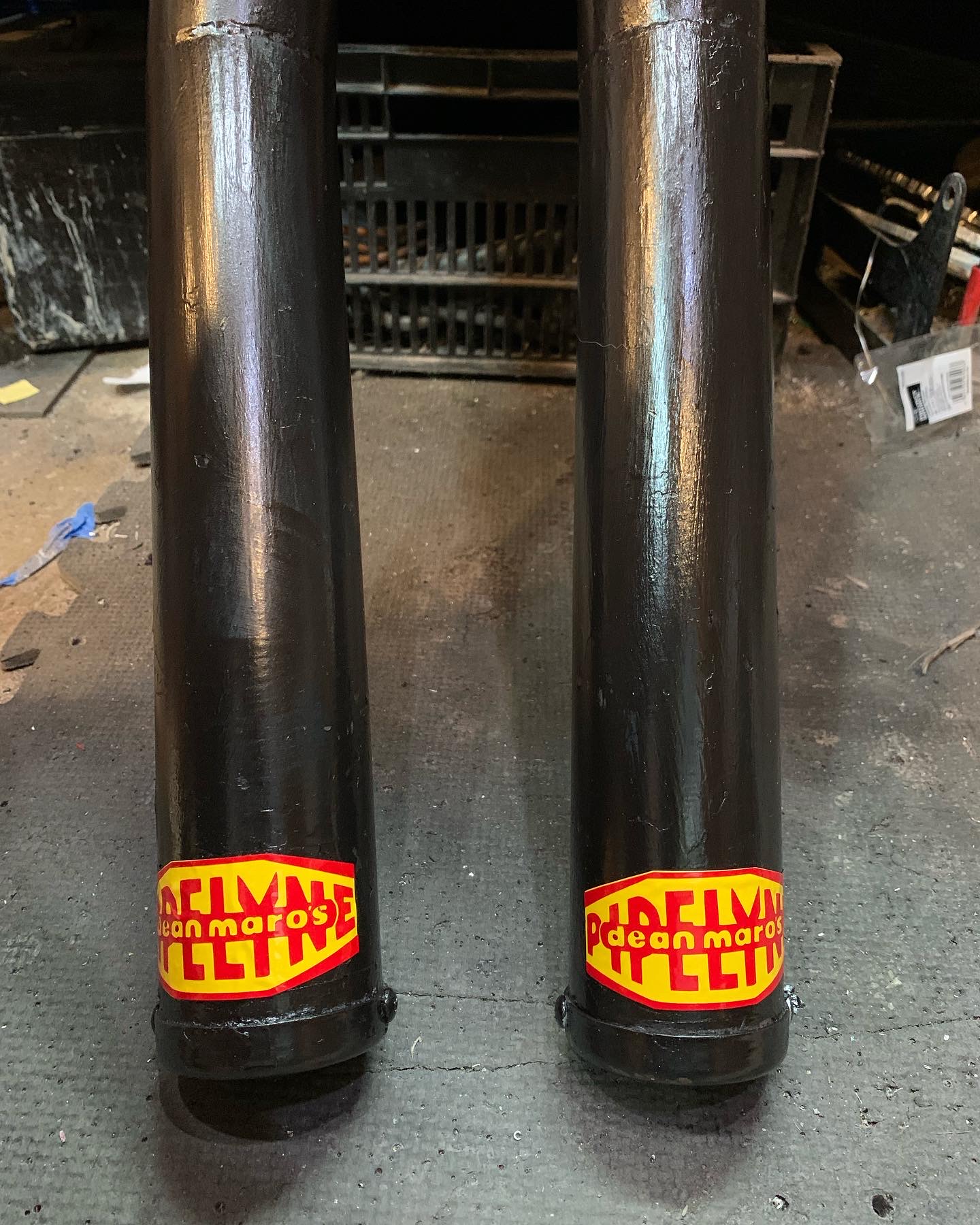 DTT BOTM WINNER
Let’s mark this complete, even if it never is. It’s at least time to ride. 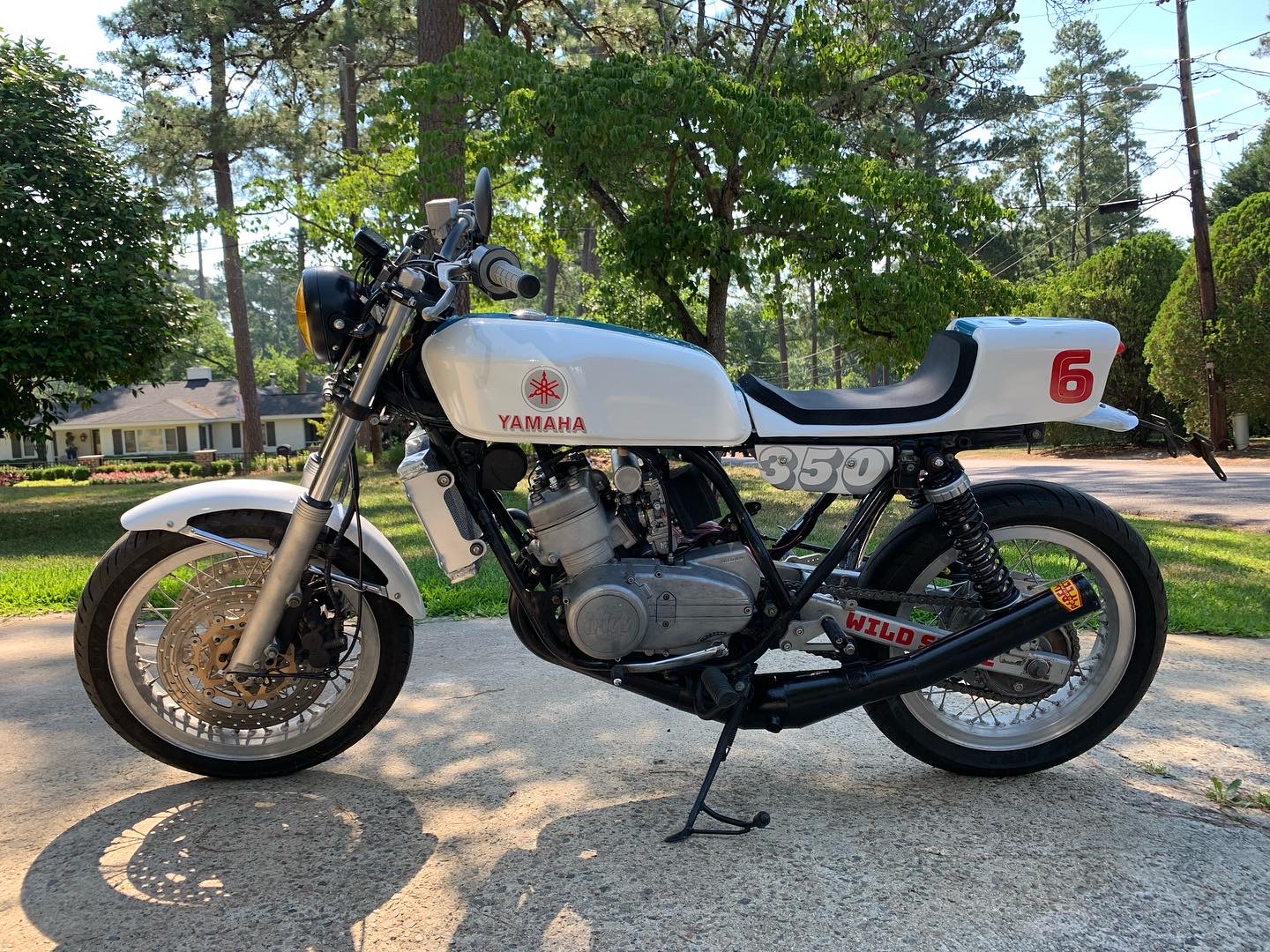 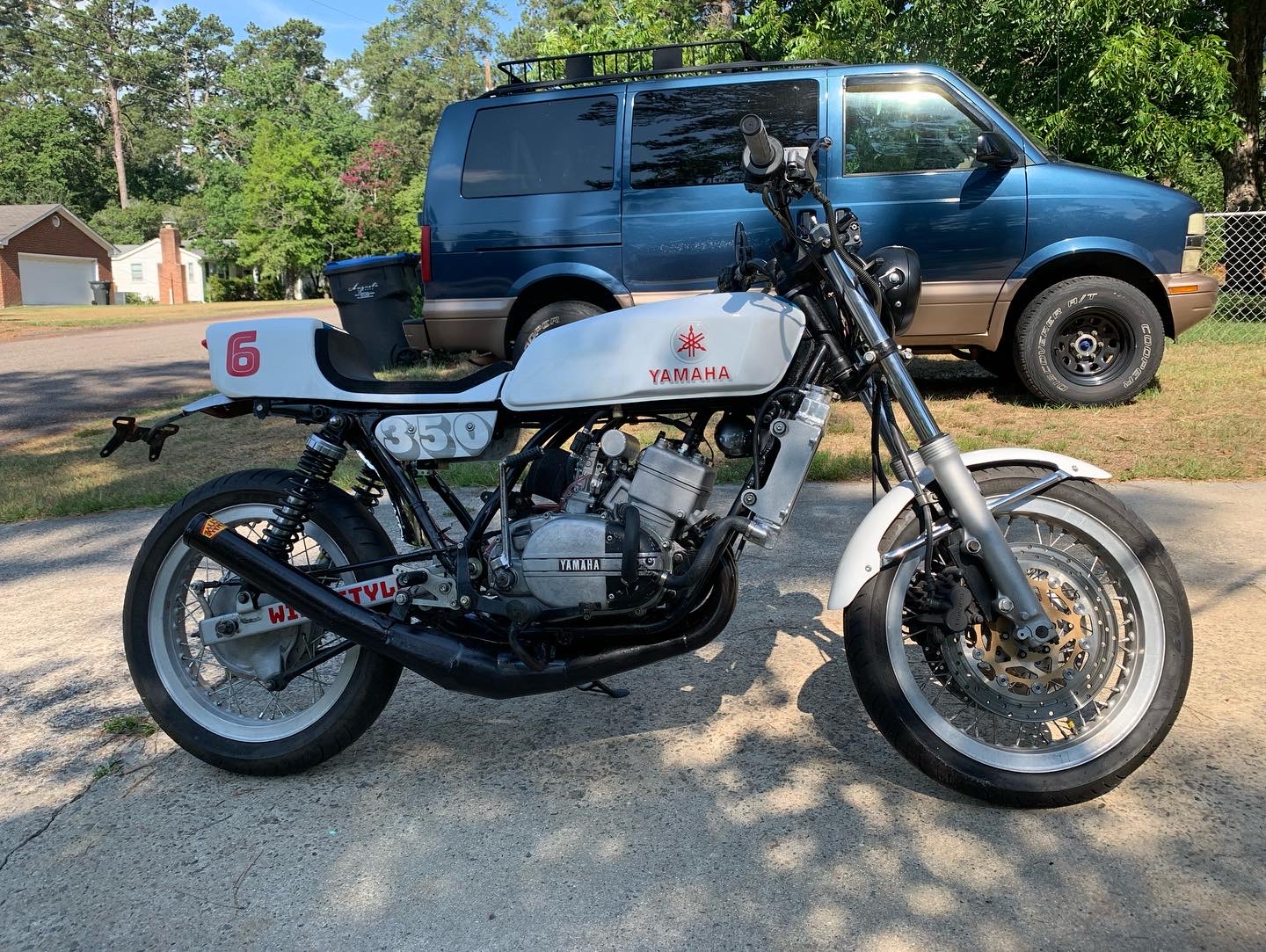 DTT SUPPORTER
Rad, those stickers are a nice touch.

Bad to the bone man

But what is teh front end? Look like Cb900 or GL1000 legs. Did you bore the RD triples or use a complete front end and then upgrade the disks and calipers?

But what is teh front end? Look like Cb900 or GL1000 legs. Did you bore the RD triples or use a complete front end and then upgrade the disks and calipers?
Click to expand...

I think I found my last issue with tune. I’m pretty sure these aren’t supposed to be polished. Time to upgrade the clutch. 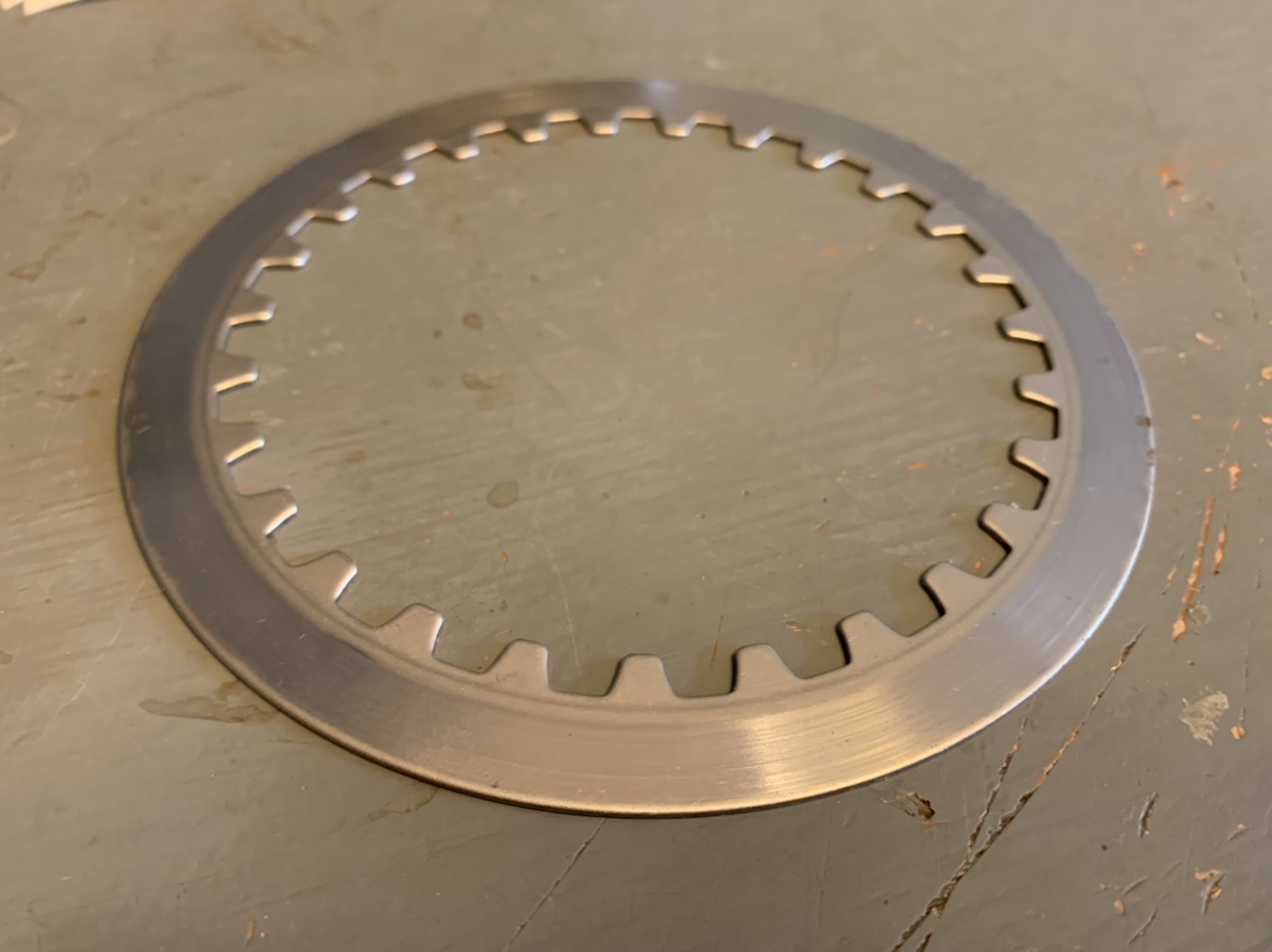 DTT BOTM WINNER
In the name of science and thrift, I roughed up the clutch plates on a surface plate. Then I added these little 2mm shims under the clutch springs to stiffen them up. I was missing the bearing ball from the end of the rod on the clutch side, so replaced that. Ready to test again.

In the meantime, I have a Barnett clutch on order. 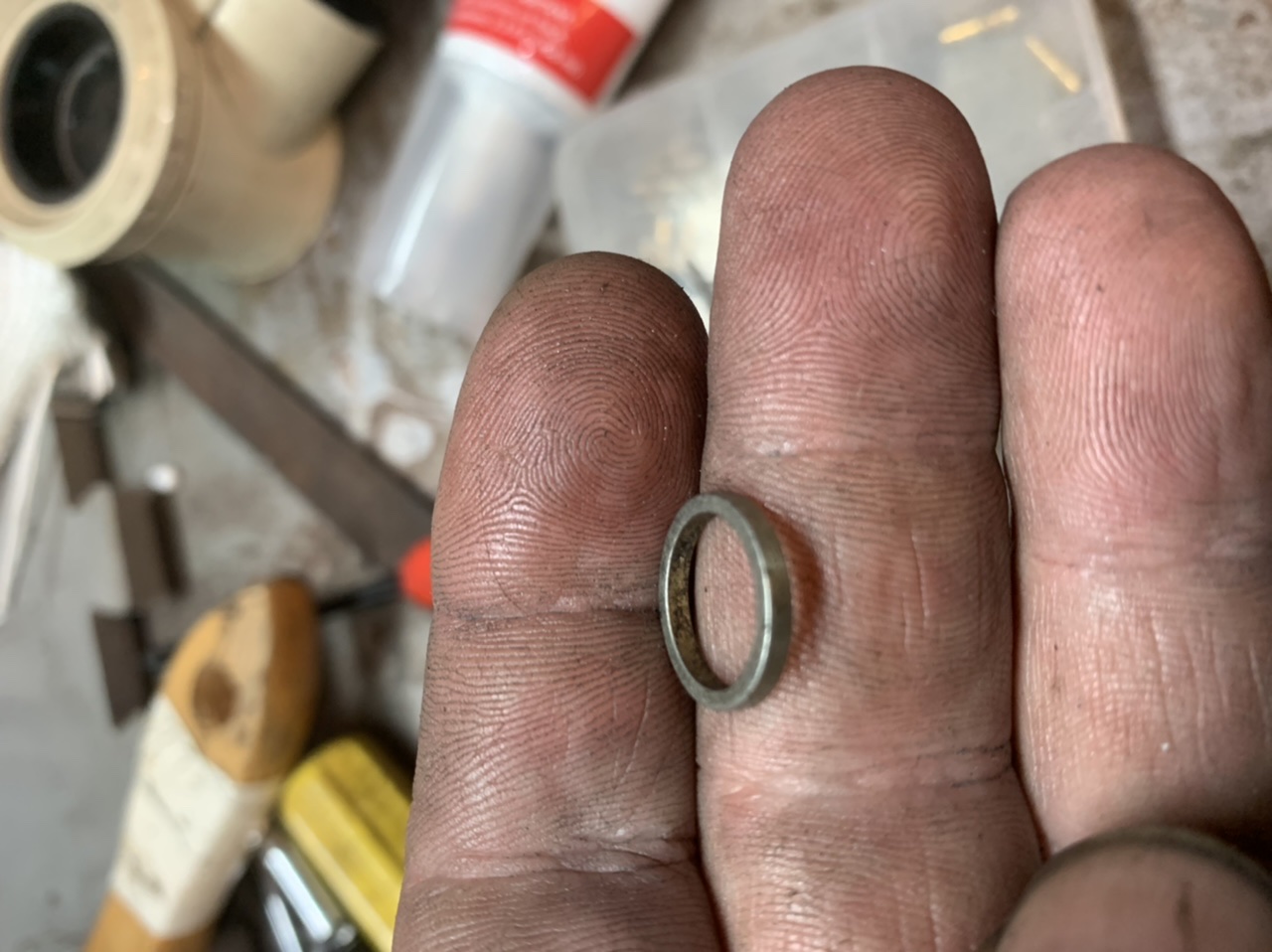 DTT BOTM WINNER
You can abrasive blast the steel plates with something not too aggressive - say glass beads and that should work.

DTT BOTM WINNER
My morning shakeout was fruitful, as far as clutch. It should get me plenty of tuning hours until the Barnett clutch arrives.

I think the tune may be a bit of a mess. I felt rich on the pilot, so dropped to 40. Google searches suggest 40 on the pilot for the TM carbs, so probably not in a bad place there. In fact, it's 1/2 to 3/4 throttle and about 1/4 throttle into the power band that it just falls apart. It's almost as though it's fighting itself and neutralizing it's own power. I think I might be able to flutter the throttle to get it to stick, so maybe that's a lean issue. Something is out of balance, either carbs or timing or something. I'm running the Vape, which I've set at 016 off the ramp. I'd like to advance it some, but there's no adjust that I can find to advance it any more. Unless I am backwards on timing and should go the other way. Anyway, I am seeing all the potential. It's like a rocket when it hits the power band. I still wish I had more on the low end, but I'm learning that throttle and making it scream helps off the line.

DTT BOTM WINNER
Sounds like a needle taper and needle jet diameter issue. Did the smaller pilot jet create any change in off-idle performance? If so did it get worse or better? #40 for pilot sounds right and P-2 needle jet should work with a 6FJ6-3 needle according to my notes. That is the setup recommended by someone on 2strokeworld. What is your high rpm timing set at?

DTT BOTM WINNER
Thanks for the notes, Teazer. I ordered a set of needles and needle jets, so we'll get a test run on those by next weekend hopefully.

For now, I have the timing part of the equation figured out. At first, I installed the rotor wrong, because I was going by another set of instructions for another VAPE RD kit. The kit is set up to where you time it by removing and moving the rotor. Not a fan of this one bit. I might see about making a plate to move the sensor 10 mm, so maybe 5 mm off TDC in either direction.

Once I figured out that I have to use instructions for a Powerdynamo/VAPE kit, I think I have it right. I started at 4mm advanced and finished at 3mm. Figuring a mm is somewhere close to 2 degrees.

I still want more power at the bottom end. I'm not saying there isn't any, but I think it has more to give. The clutch is working for now. It manages the power band much better, but I can't wait until the needle jets and needles show up. It's breaking up halfway through the powerband. As a point of reference: my street is perfectly level and straight and roughly 150 yards from sign to sign. I got from 0 - 86mph in 100 yards.

DTT BOTM WINNER
Just as a random point of reference, what is the compression pressure? 140 or less, it needs to come up to raise low end power and 200 or more, it would need to be reduced to let it rev and to avoid the Chernobyl effect. I set our TZ or TR/TD motors to 1.85mm but they are fixed timing and that should work out to about 19 degrees. On RD based street motors 2.0mm seems to be more common.

The old MZ-B internal rotors had to be removed with a two prong puller that wasn't very elegant but seemed to work. A slotted stator is a whole lot easier to adjust. Or try a fixed timing PVL or Motoplat for flat out runs and a fully programmable unit for the street. Do Zeeltronic do a DC-CDI unit of that ignition by any chance. I have not looked at the programmability of an MZ-b (powerdynamo) unit.

DTT BOTM WINNER
I reset the timing to 2mm. Compression is 140 on the money.

DTT BOTM WINNER
I finally got out to a Coffee and Cars and it was on the RD. What a blast this bike has become. I’m super close on the tune. I’ve been timing it wrong all along, but I finally have it legitimately timed to 1.85mm, checked, double checked and confirmed. That alone made the bike beyond wild. All the power I was searching for at the bottom end is there now. I’m thinking the carbs are good through 3/4 throttle. Something might be missing at the top end.

I ordered the needles recommmended byTeazer in an earlier post. They’re much fatter at the tip. 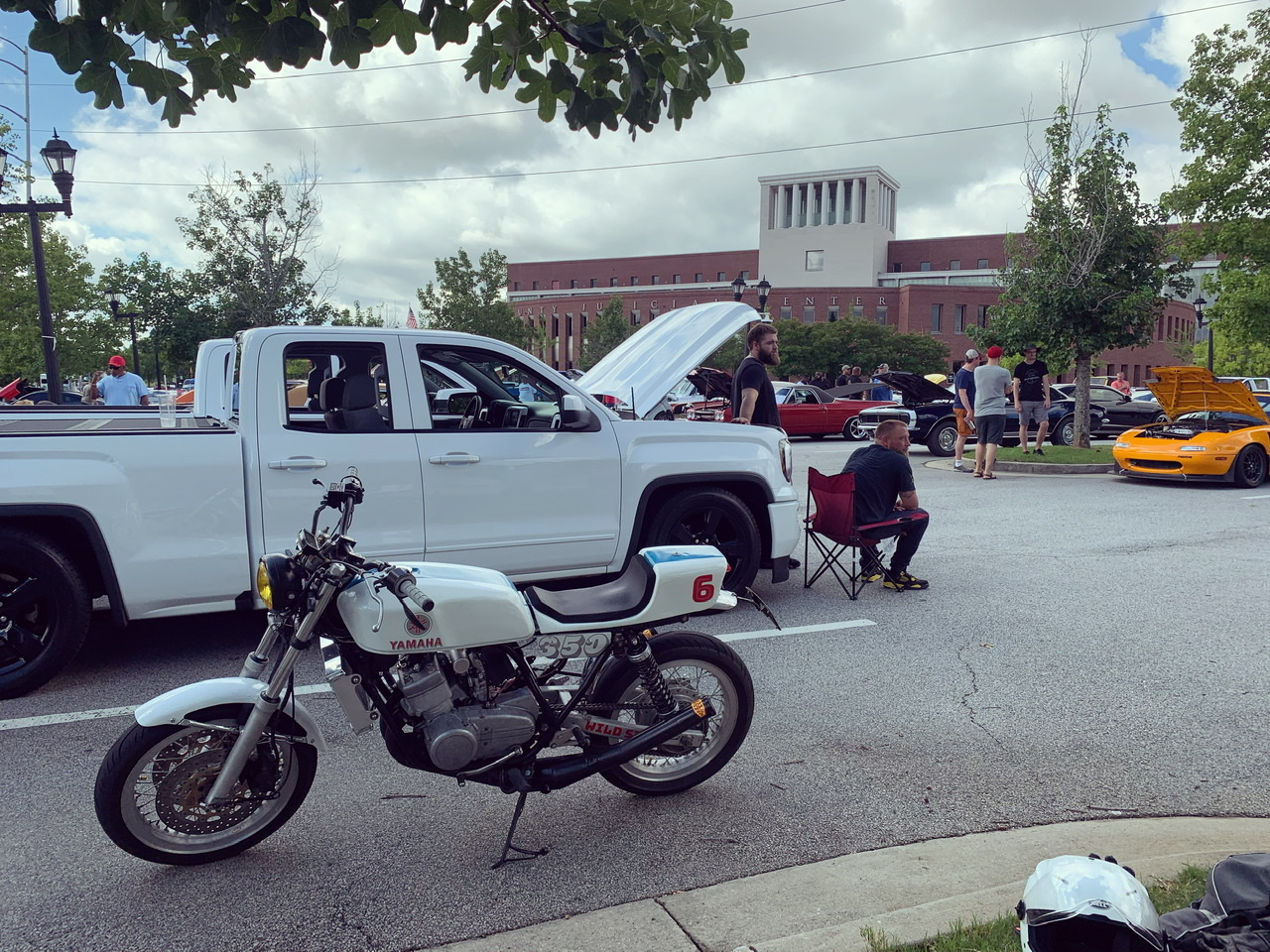 DTT BOTM WINNER
Sounds like WOT is still not right and when that's right, it may upset midrange because they are all overlapping and it's enough to drive you mad. Try a plug chop and see what the plugs look like.
M