I'm starting my build thread in the special section because i'm not 100% sure where it is going to go. As of now i'm bobbing off unnecessary parts/metal and then i will have a better idea, i'm thinking tracker style. My build platform isn't quite as popular as most, but with some elbow grease and creativity it should be a looker. The main concern to me is that it runs strong and rides straight when i'm finished. (it started out that way as far as i could tell from my 5 min test drive after purchasing it ;D)

Fired up the wood stove in the garage and put a little time in on the build, it was snowing like a bastard outside so i figured what better way to weather the storm.

Pulled off the following:

I also fixed/replaced a leaking main fuel line that was cracked, good chance it was the original. So far I am impressed at how clean this 32 year old bike is. Here are my progress pics

*sorry my pics uploaded kinda small from my phone, i will post larger ones from now on*

I spend a little time on the bike yesterday, i would have spent more time but my Jeep needed some tlc first.

I removed the speedo and tach from their mounting bracket along with the large cluster of indicator lights. My plan is to keep the tach and speedo but rework or make a new bracket to bring them closer together and tucked closer to the triples. I'm not going to be reusing the original indicator lights because they are too big and bulky, but i did take the indicator light cluster of my '79k parts bike which is must smaller and nicer so if it decide to have indicator light i will most likely use these ones. 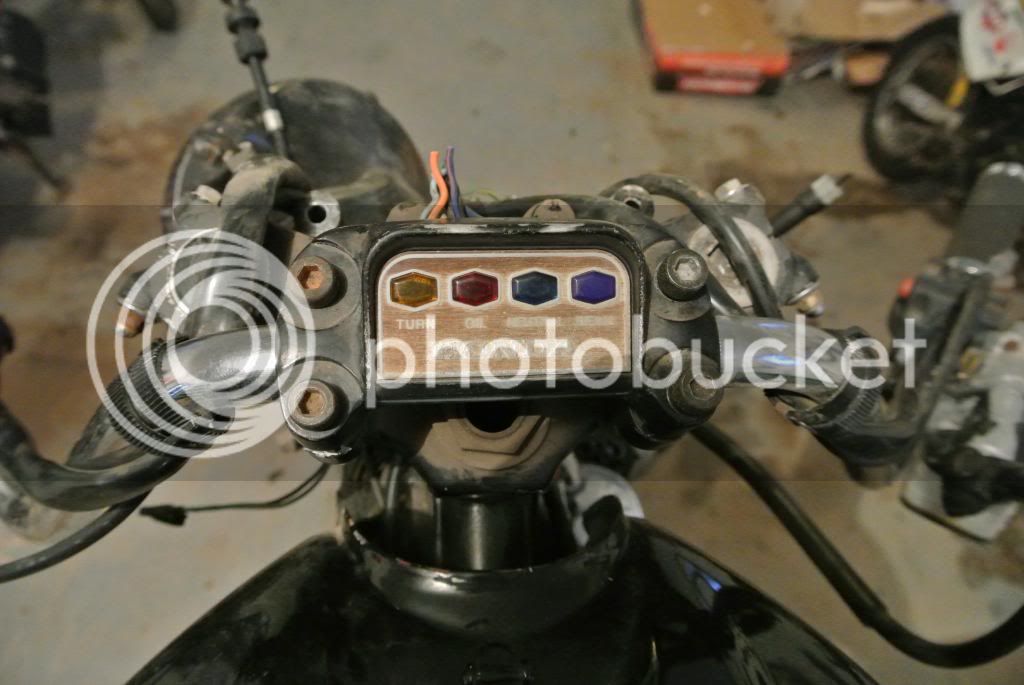 I also unbolted the choke cable and ignition, which i hope to be able to move to the middle of the bike near the seat/airbox. Then i removed the tank from the bike and replaced it with the tank from my '79k parts bike, i must say i like the profile/shape of the k tank compared to the C tank. 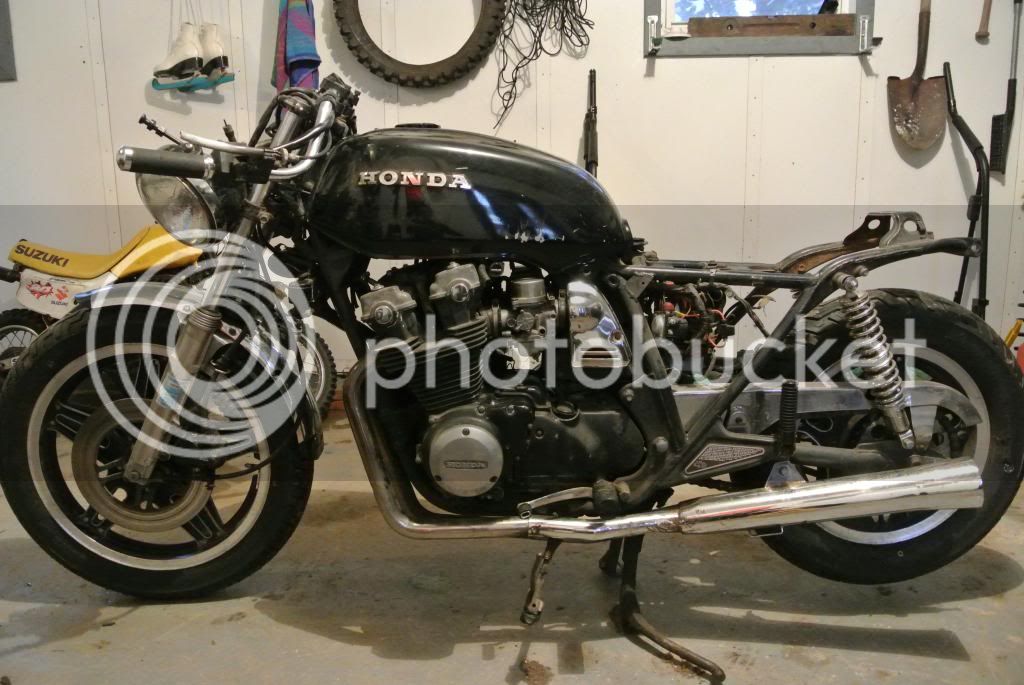 The new tank doesn't fit perfectly, but it's nothing a grinder can't cure, you'll see in the pics that i need to shave a little off where the tank bolts to the frame so it sits a little more flush and i need to trim off the tabs where the side cover attach the tank on a '79k bike. 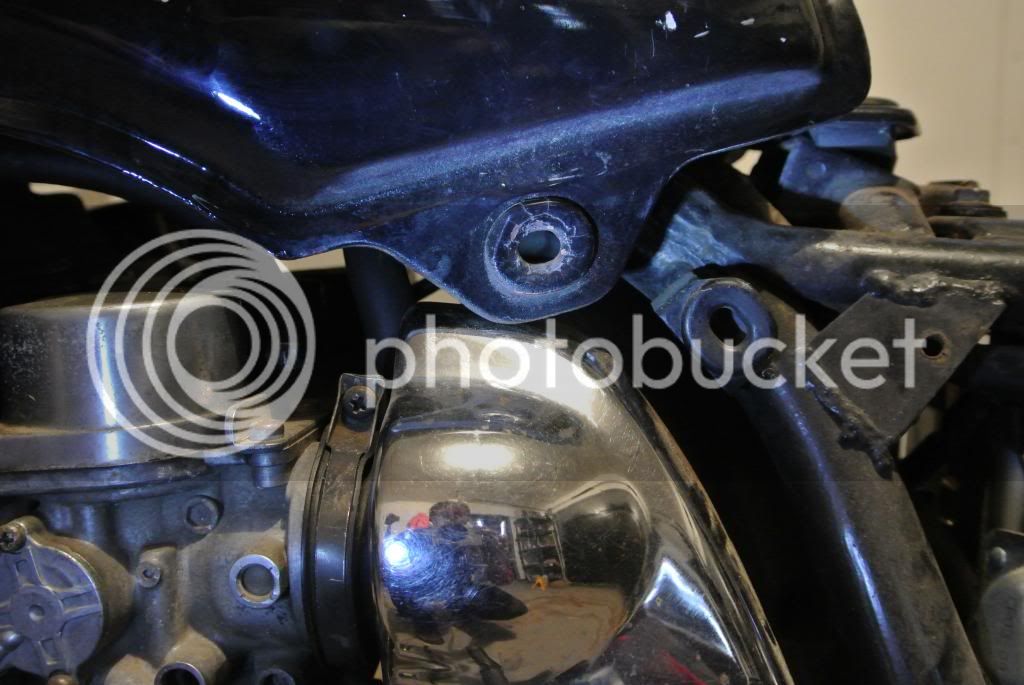 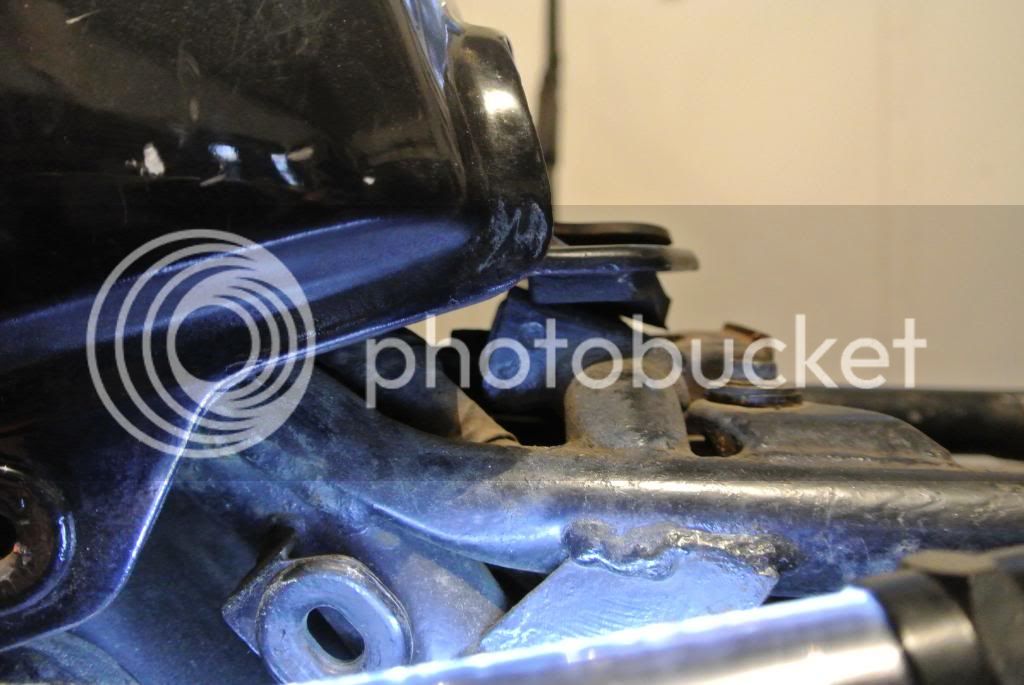 The last thing i did for the day was take the seat off the '79k parts bike and tear it down to its pan and set it on the bike to see if i can cut it up and make it into a new seat pan, i think the possibility is there but it will work better if i cut/shave original seat from the bike so i can keep the option of the stock mounting brackets just behind the rear shocks. 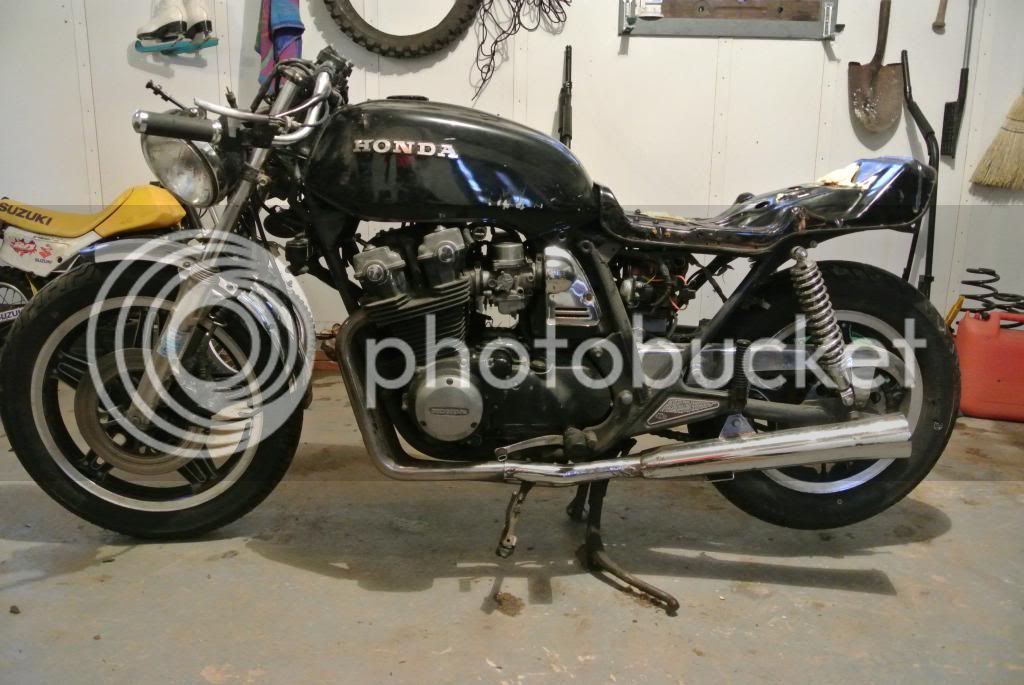 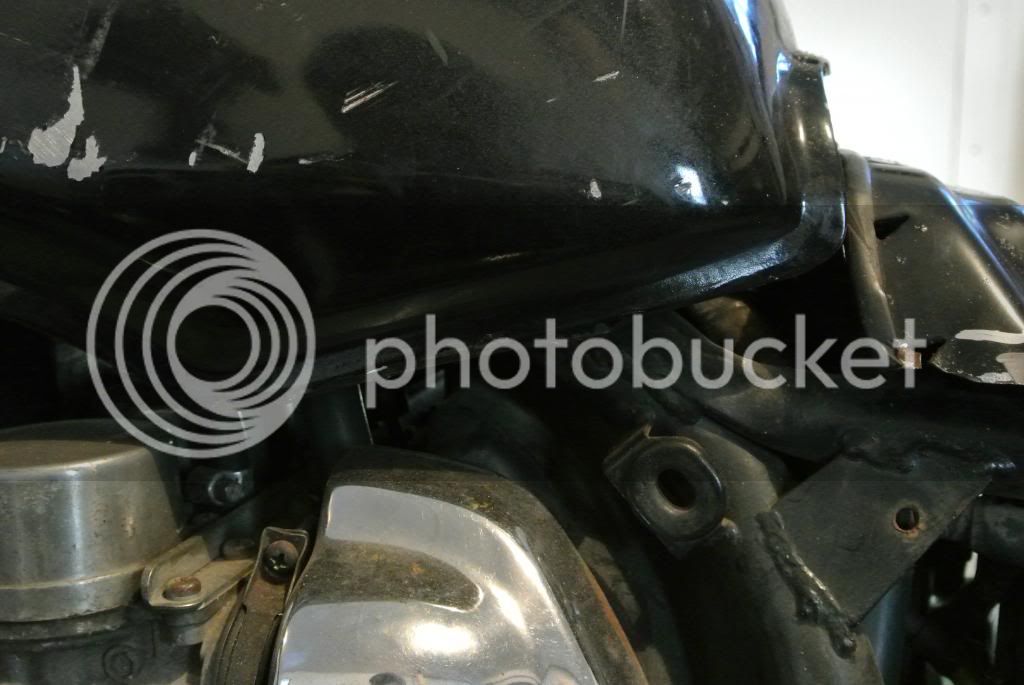 i also re-worked the stock seat pan which i think it turned out pretty good for now. It isn't perfectly smooth, but i think padding and leather with cover it up. What i did was basically use the tools i had in the garage to cut/bend and shape it the way i needed. I trimmed the excess material off with a cut-off wheel, the used my vice/mini anvil to bend and beat it into better shape. Then finally i mock mounted the seat on the bike and used c-clamps, heat gun and dead blow hammer to make the fitment even better. You might notice a gap between the frame and pan in the rear but once it's bolted into place and finished i'm hoping it will be minimal. I did a few other small things, but i forget what they were 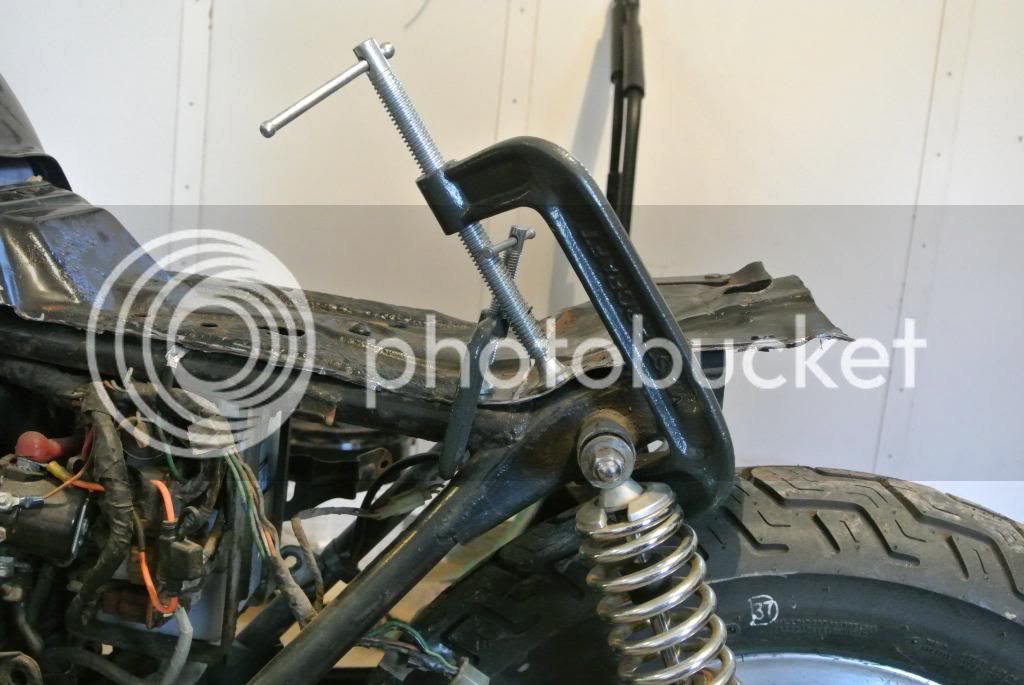 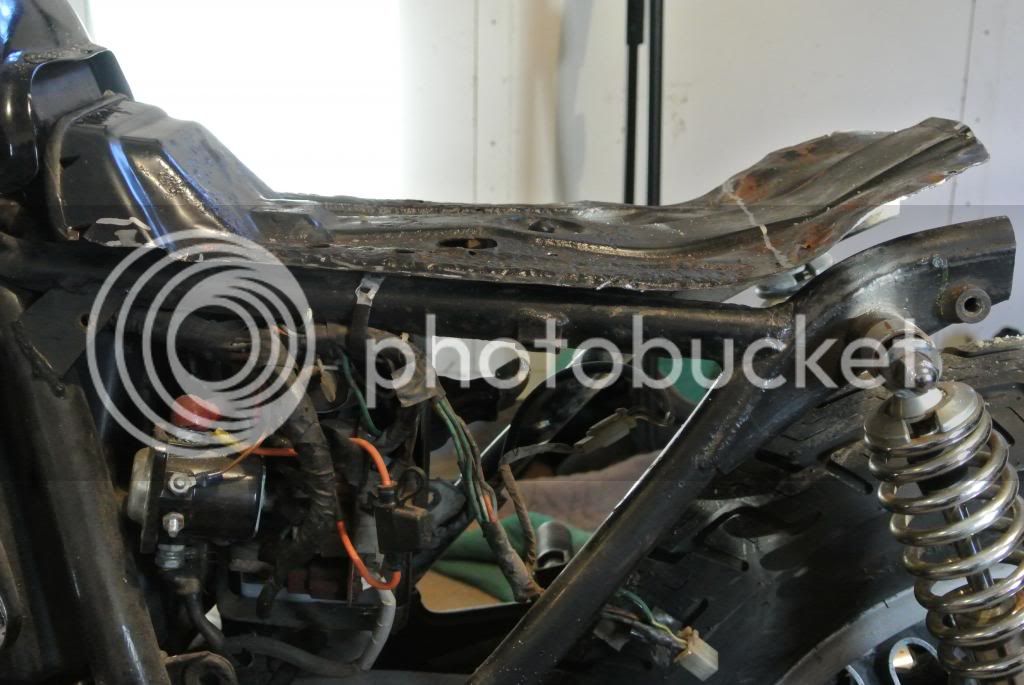 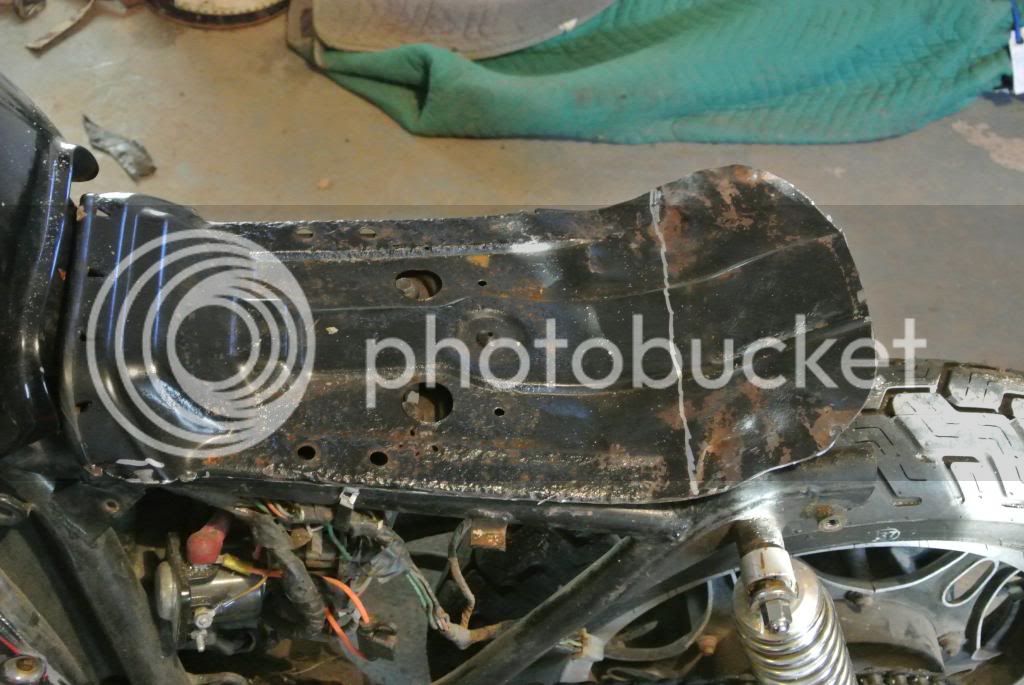 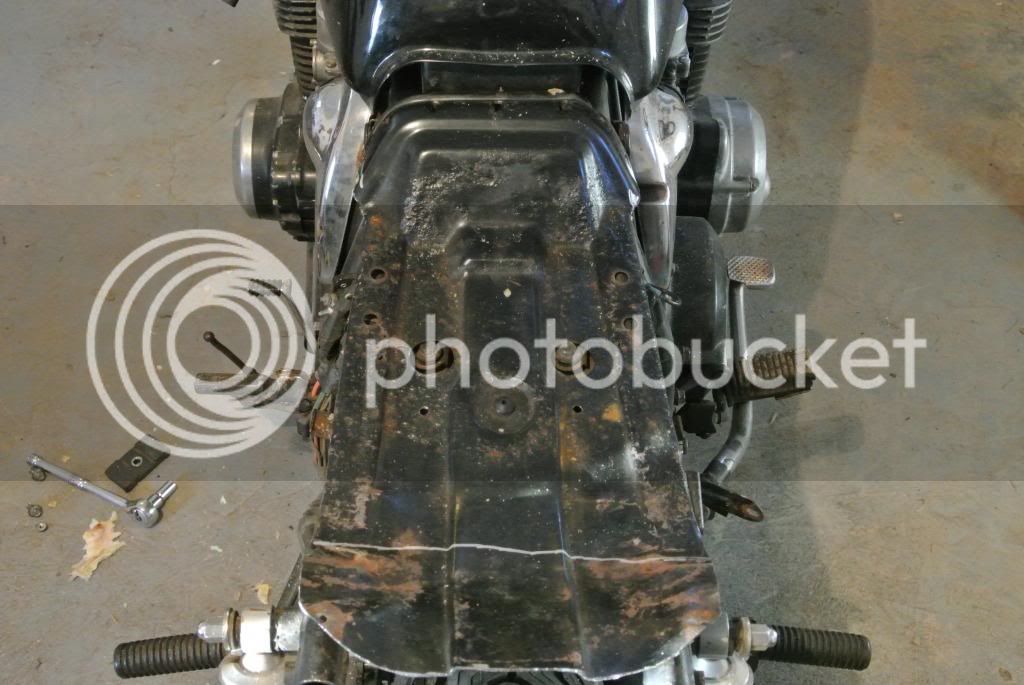 yea the KZ / KA tanks are shorter than the others and have different rear mounts. I had the same problem with mine.

I fabbed up a new mount for my tach and speedo which i made it out of 16g steel. I brought the gauges in closer to the triple and also closer together. Its not a final product, just a rough draft. 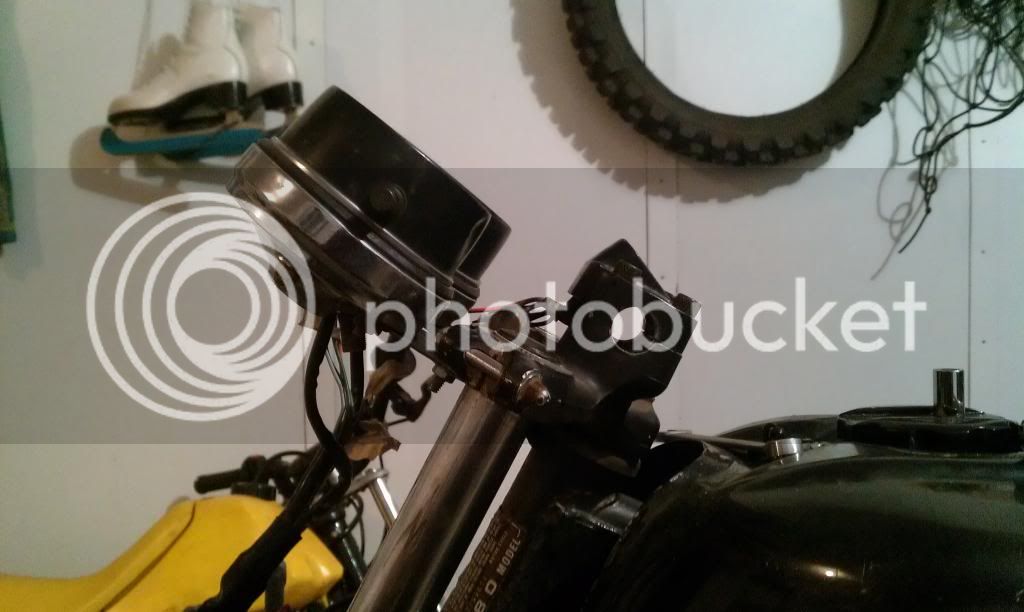 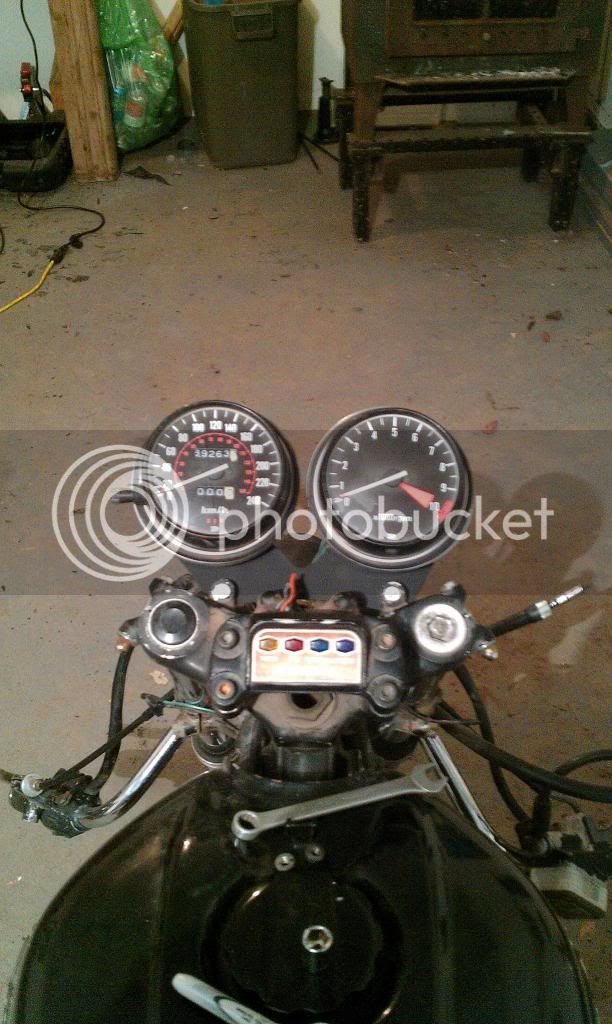 Received a few goodies from DCC today. i've made some pretty good progress in the last week. I will try and venture out to the shop today and put my headlight brackets on and take progress pics, but it's a balmy -20 C outside so walking 50 feet to a cold garage isn't that appealing ;D 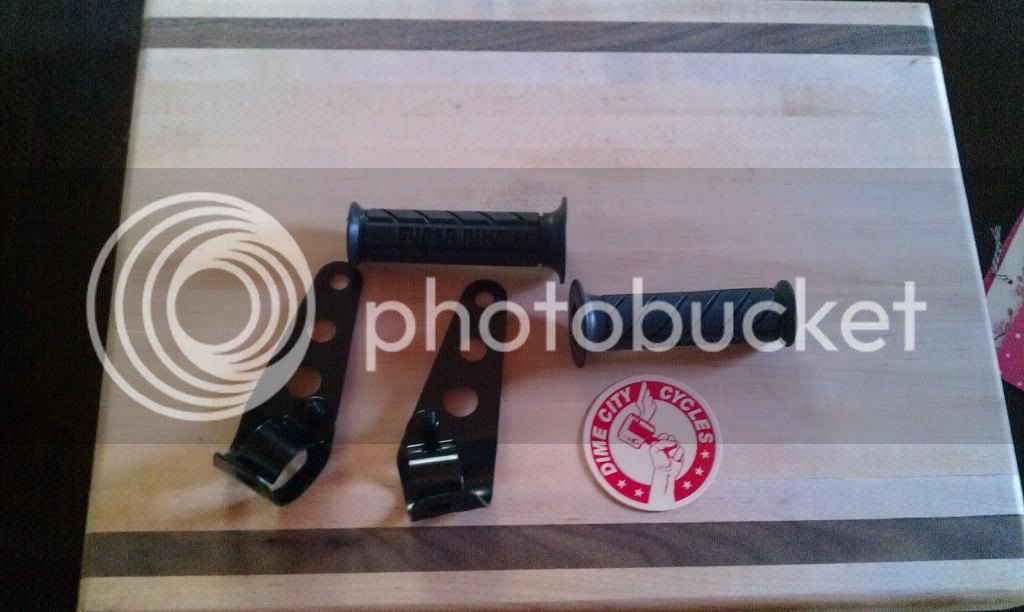 but it's a balmy -20 C outside so walking 50 feet to a cold garage isn't that appealing
Click to expand...

I can relate to that... it's been single digits F here all week as well.... heater struggles to get the shop warm.

I finished my seat pan tonight, i re-purposed my wifes yoga mat with the promise that i would buy her a new one (which i did ) to use as padding. I then bought some vinyl to cover the seat pan, but it ended up not being the right material for my seat, it was too thick and made too many creases even after heating it to soften it. So then i went to my local second hand store and found a nice vintage leather jacket with stitching that i liked and decided to use it. I used 3M spray adhesive to fasten the padding to the pan and the leather to the padding, then used 3/8" self tapping screws to hold the leather to the bottom of the seat pan after wrapping it. There is enough padding that the screws aren't felt when sitting on the seat. I thought of using rivets , but went this road instead. I think it turned out great for my first seat pan. I will post pics of it mounted tomorrow. 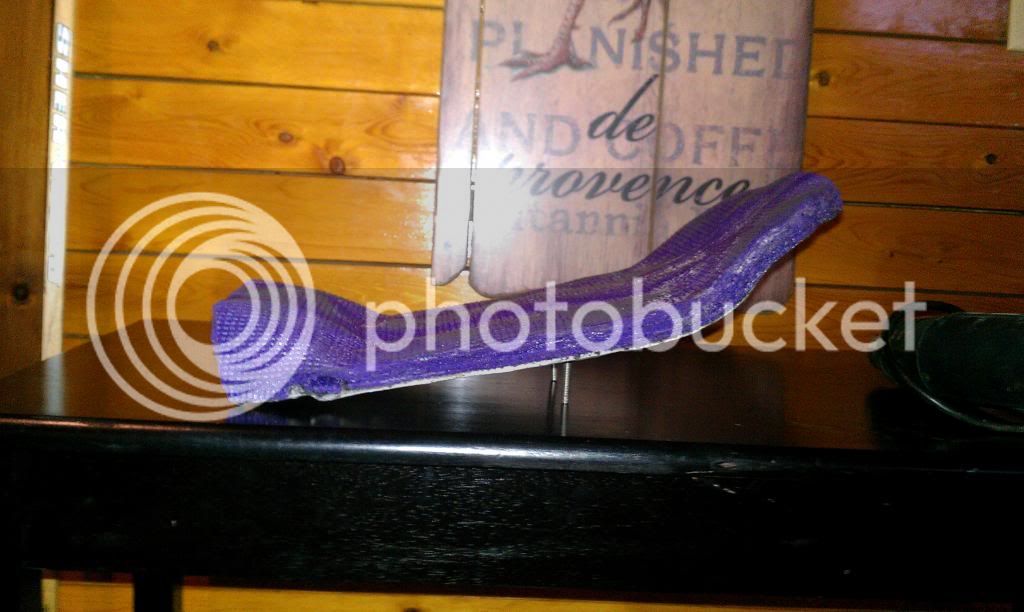 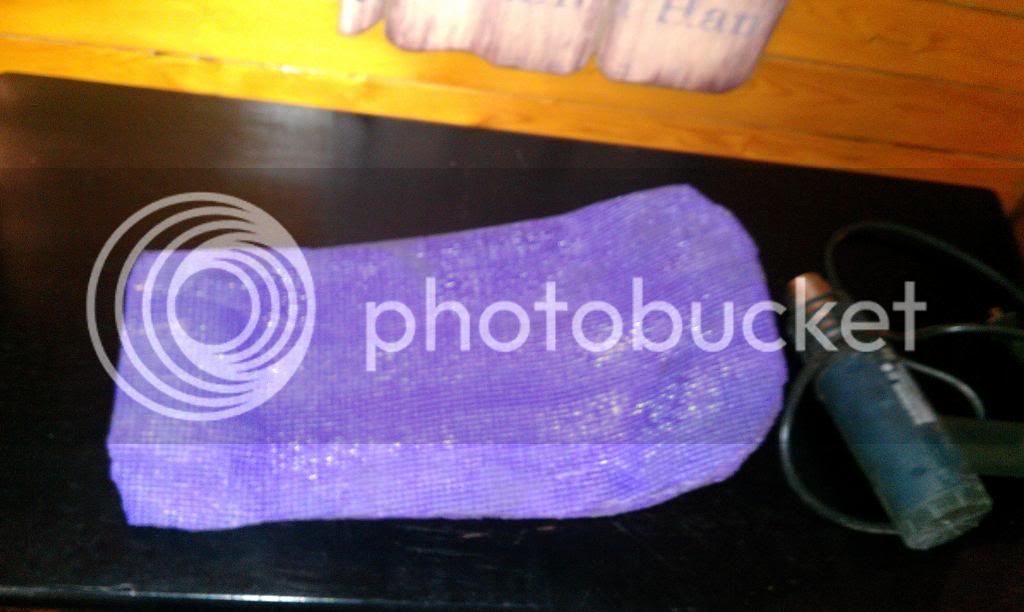 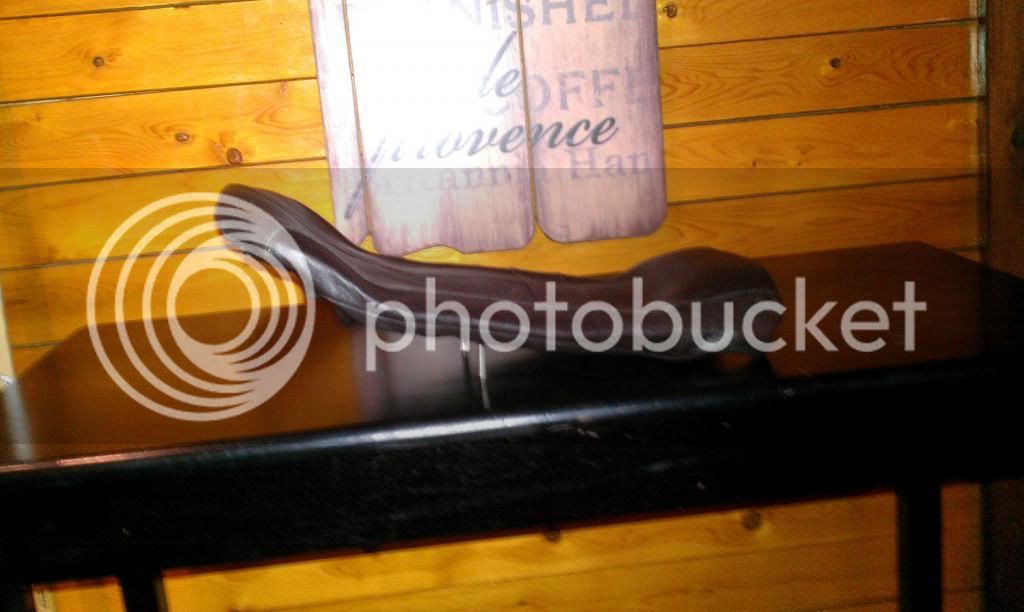 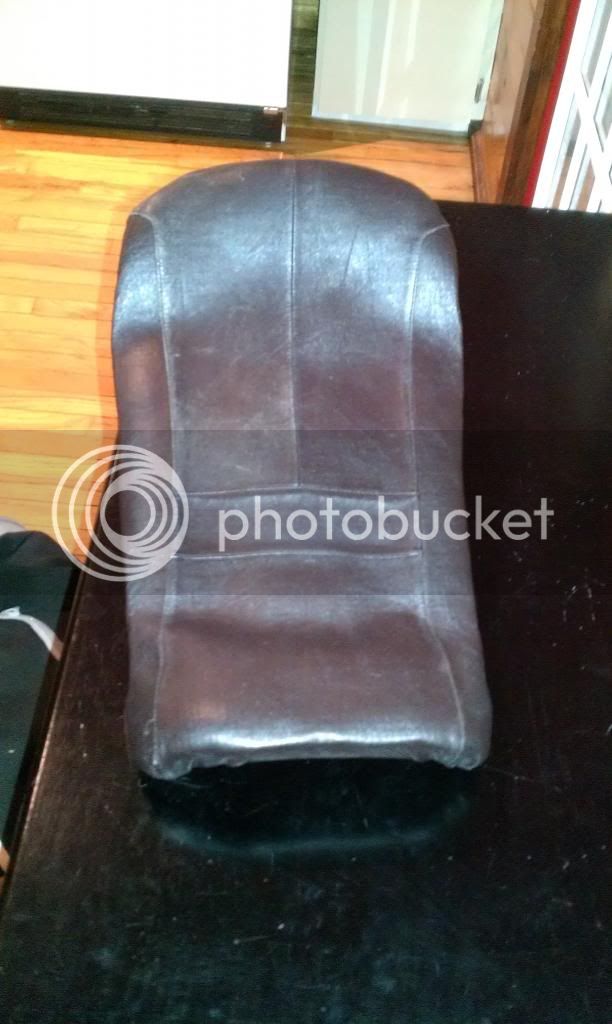 Looks like my build is taking on a bobber style, i'm diggin' it 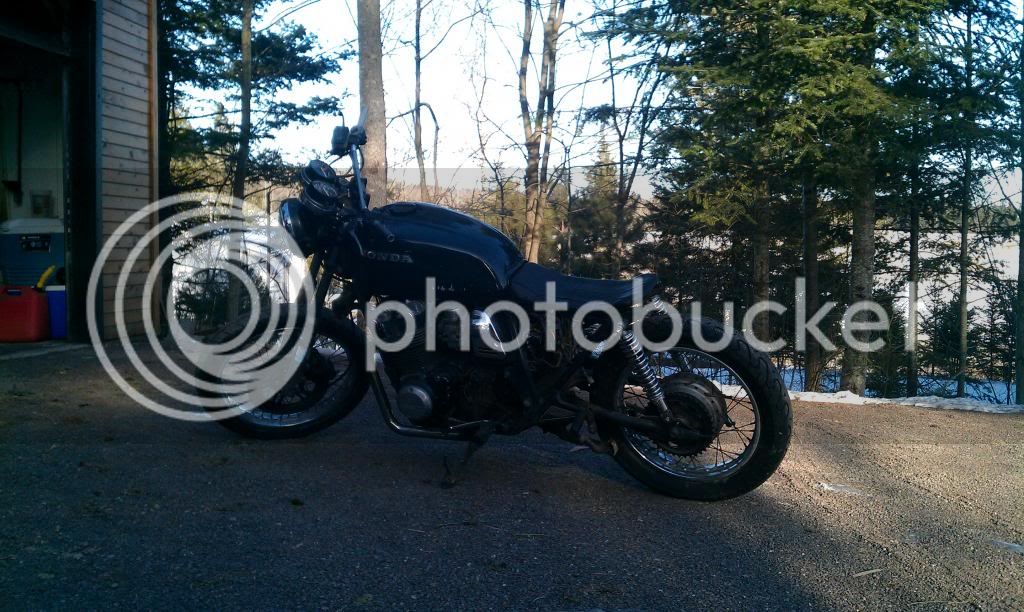 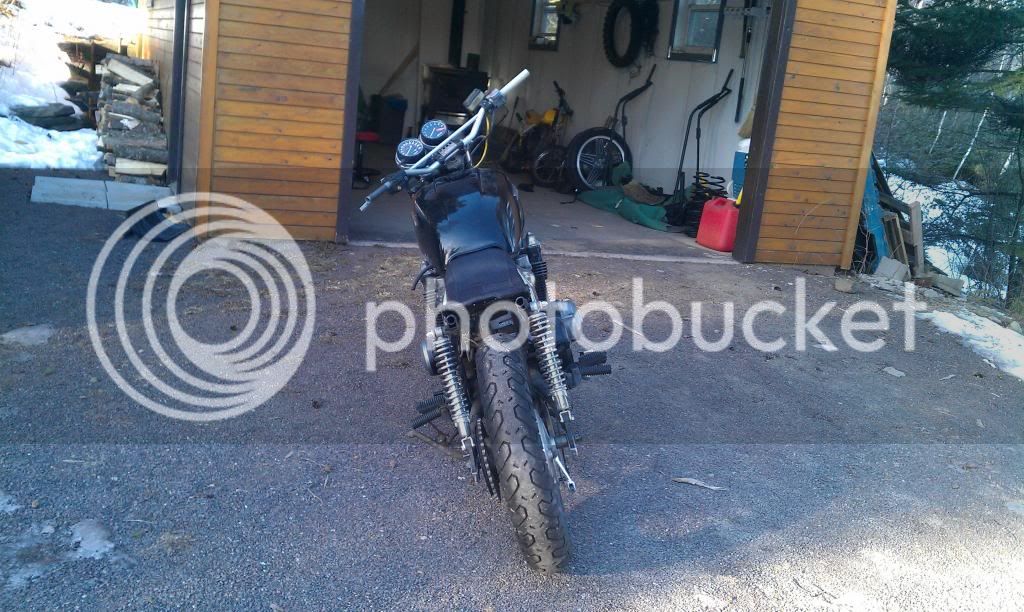 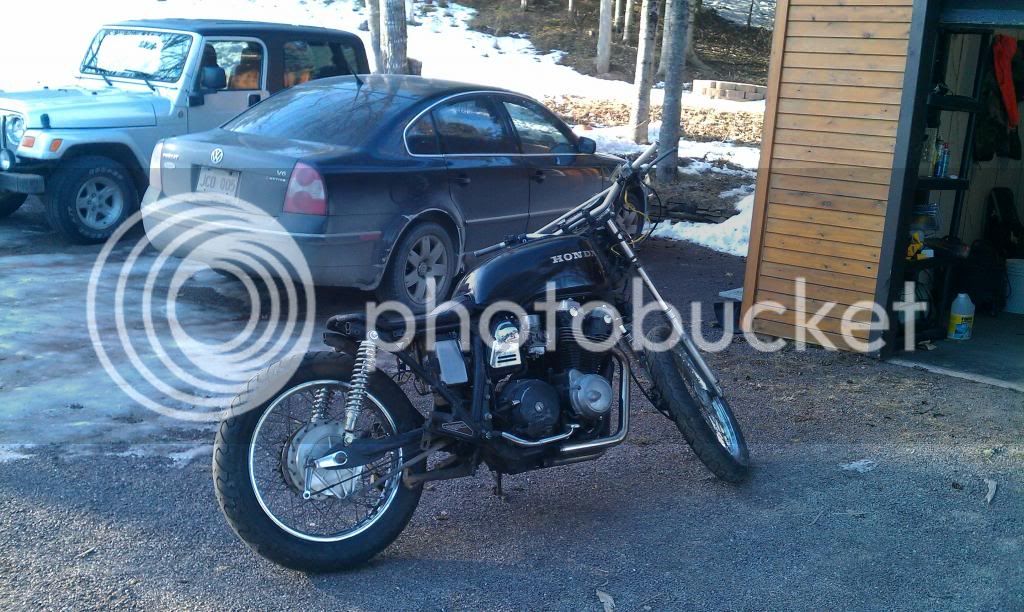 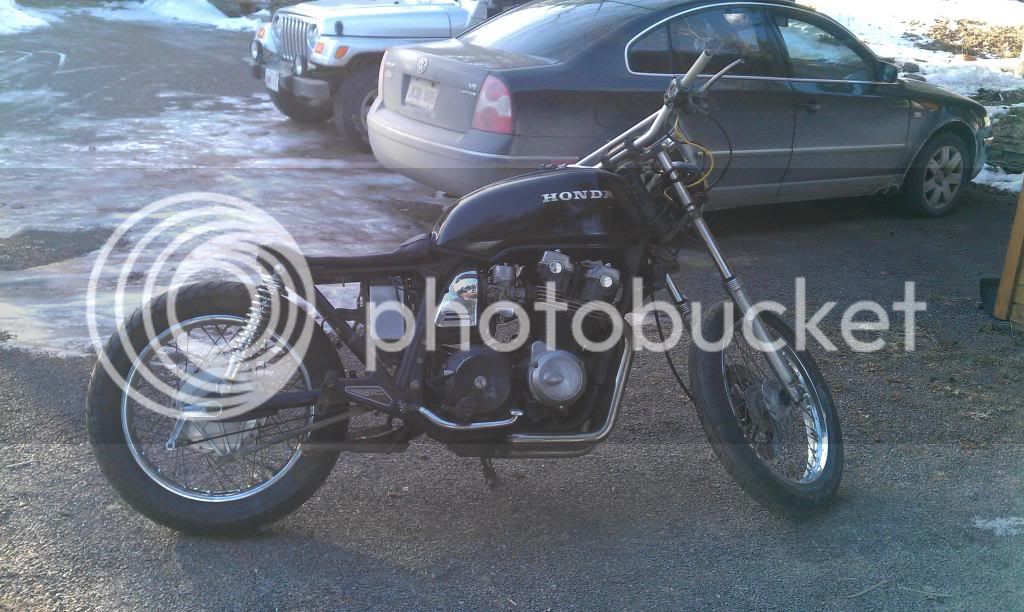 This week i took the rear fender off of my '79 parts bike and chopped down to make a fender for my build, i think it turned out pretty good. It needs a little more trimming to look perfect. I also order a new set of 530 chain and sprockets because the stock ones were pretty worn out and i want to start off fresh in the spring. 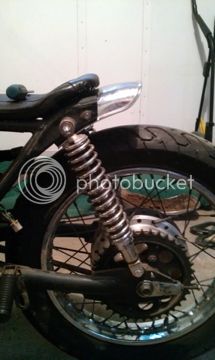 Thanks i think it takes attention away from the chopped rear which i like. Once i paint it and cap the frame ends it will look complete.

I've had a busy few weeks, but unfortunately not in the bike department. I'm back to work after being off for a production shutdown. So now i need to cram my bike time into my days off, while working 4 on 4 off shift rotation, should be tough! . Should have an update this evening.

Small update, i was in my garage for a few hours today and got a few things accomplished:

I took my stock exhaust pipes and cut about 9 inches or so off the back, removed the baffles then took the back half of the baffles and put them back into the shortened exhaust. I'm going to paint the pipes black but i am going to wait until the weather is a little warmer to help with curing. I thought about shelling out some cash for an aftermarket system, but since i am doing this build on a budget i decided to try this chop. Also i am going to be re-jetting the carbs. 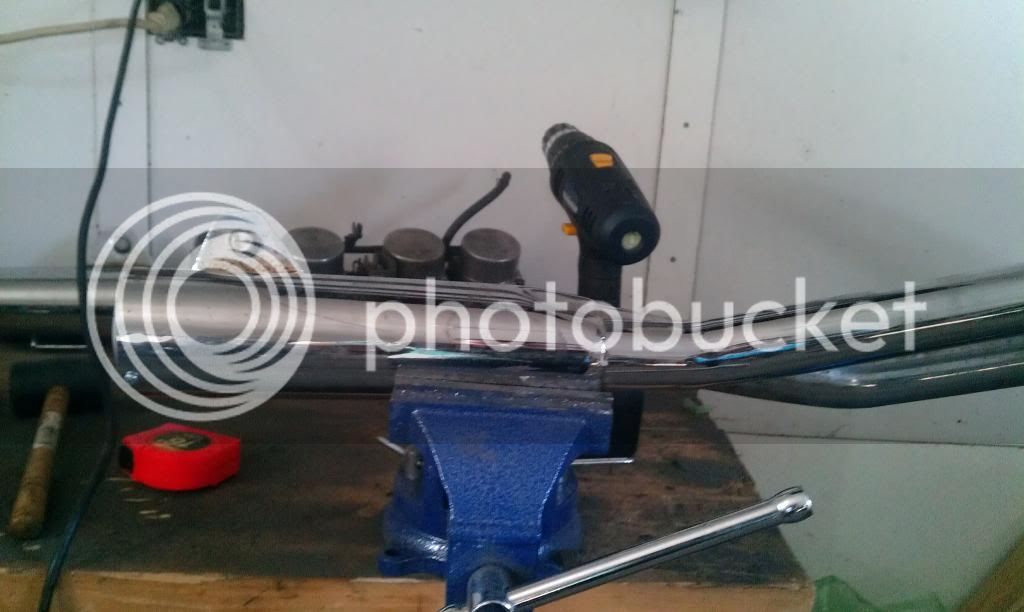 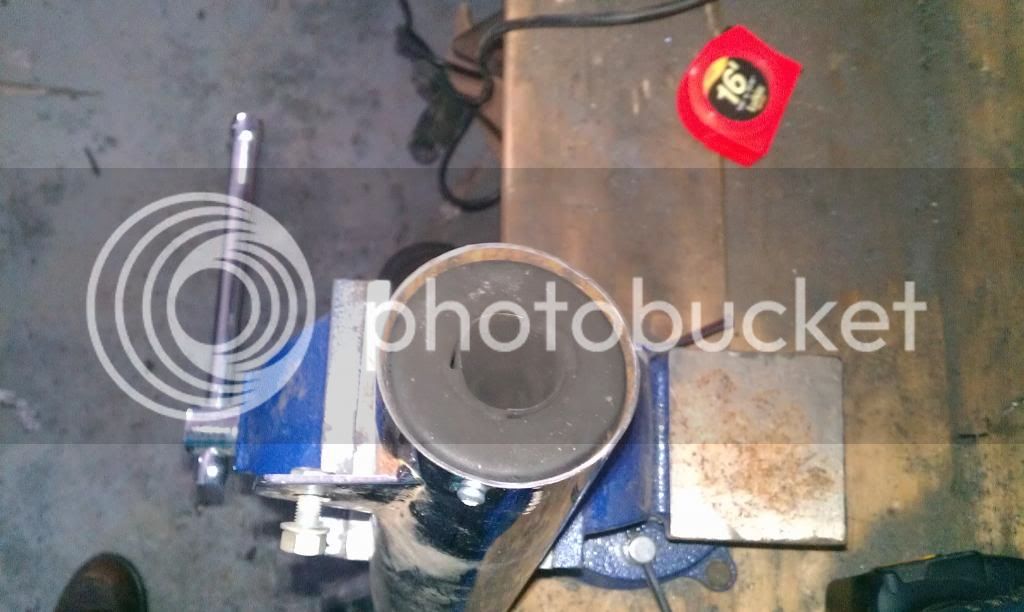 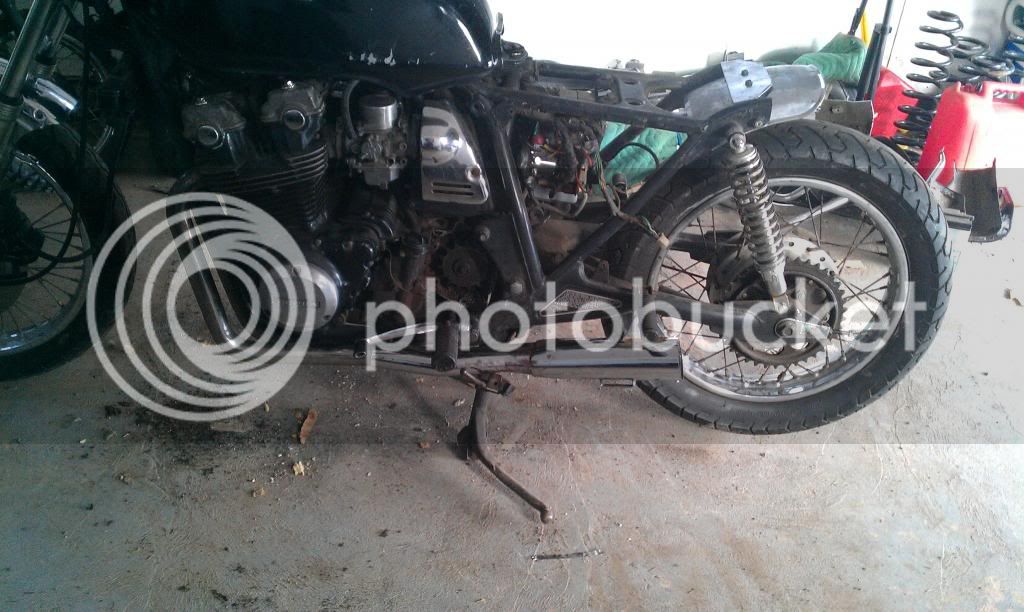 I also hid my bar clamp fuses in my headlight bucket for the time being until i find a better place for them and i also trimmed my front fender but alas i didn't take any pictures.

Small update today, i re-routed my choke cable so it is back near the battery. I haven't de-tabbed my frame yet, so used and existing tab on the frame to hold the choke cable in place. Not a huge mod, but i think it's neat! 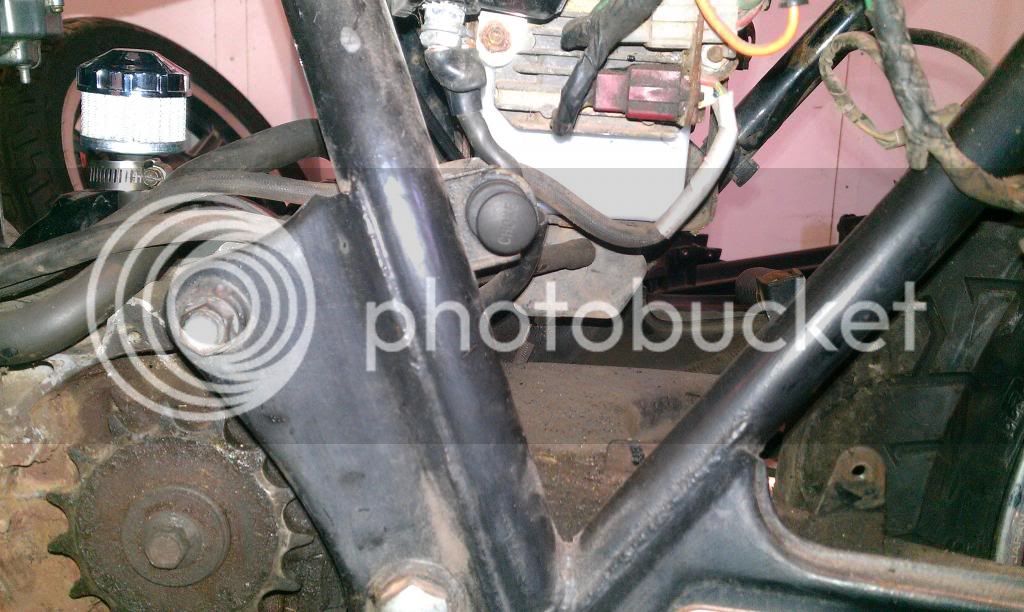 I have another small but important update as of today, i have received my battery/electronics box. Since i don't have access to a welder or that much knowledge of welding yet i out sourced my battery box. Also since i'm keeping this build on a budget i had this made for free ;D ;D . My brother had a welder at his work do this up for me out of scrap aluminum, its water tight and big enough to fit a stock sized battery, which is also part of the budget. (keeping the stock battery until it shits the bed). 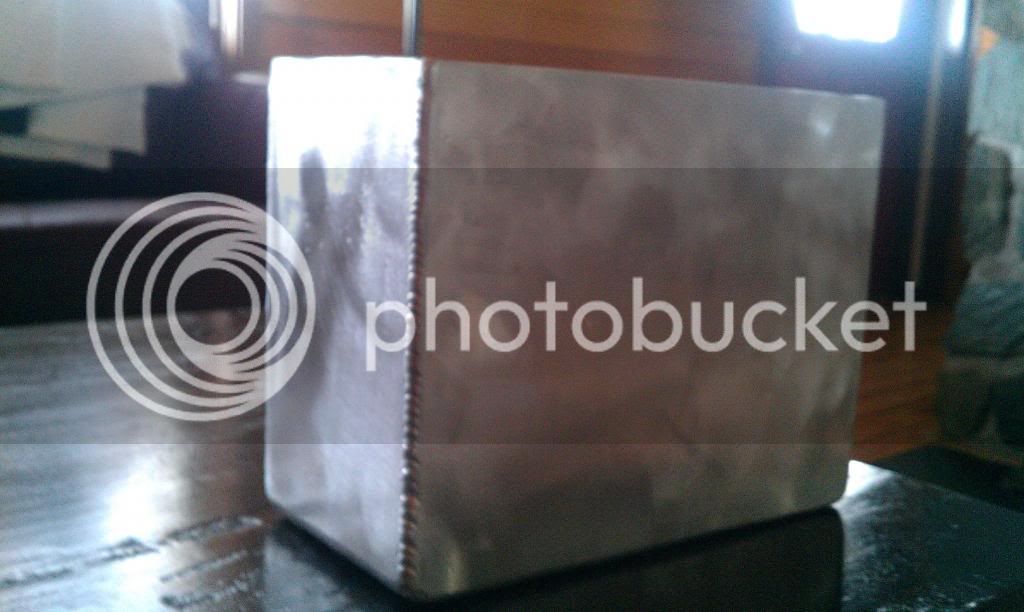