Found a sweet CL find last month. The guy called about 10:30 Sunday Morning "Come on over, It runs alittle rough but hell for 250 bucks what would you expect".

So, I'm game for a winter project 1979 CB750K DOHC. Let the girl know I'd be back in awhile and that I was gonna go and buy a new bike. WHAT! she say's and I said ya I'll be back a little while later. Bye.

Met up with Mel and took a look. Seem's like a fair deal. Runs rough but it starts and the tires hold air, lol!

Handed over the cash and loaded it up with his fork lift.

Here's the pics from the back of my PU. 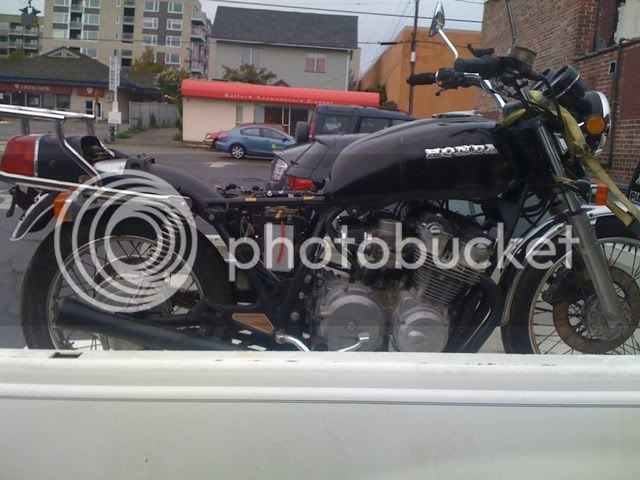 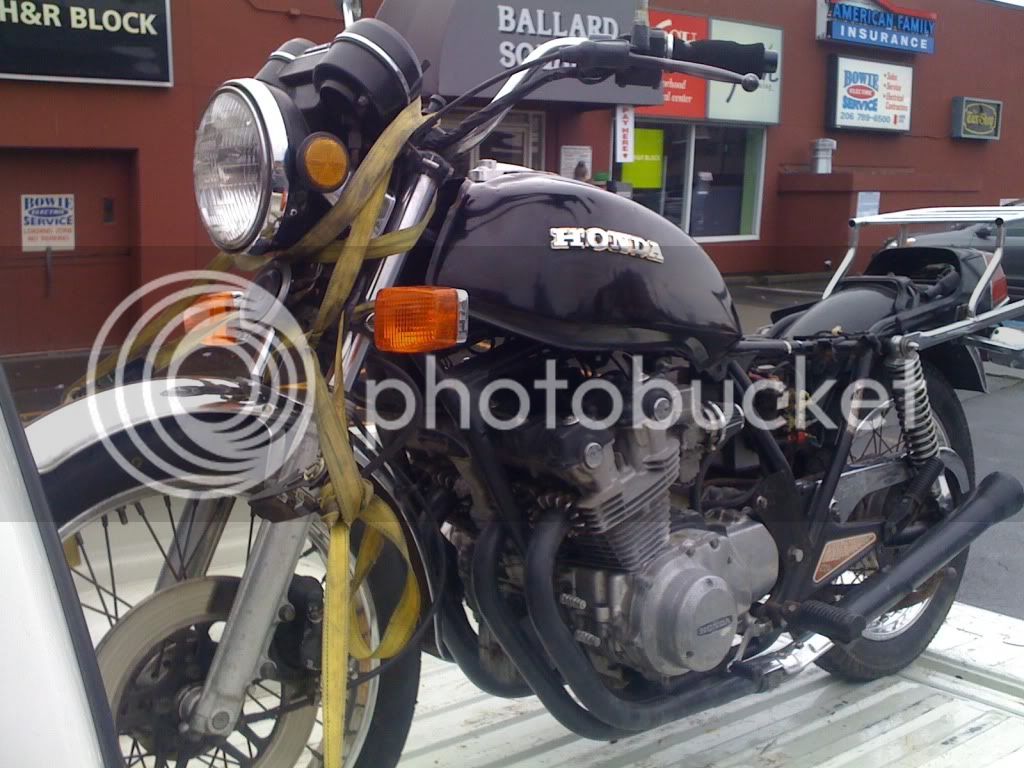 I got it unloaded and pulled the carbs. Not to bad really alittle shellac and some plugged ports but all in all ok. The float levels were all outta wack. No wonder he couldn't get it to run right. The accel. pump ports were plugged also. 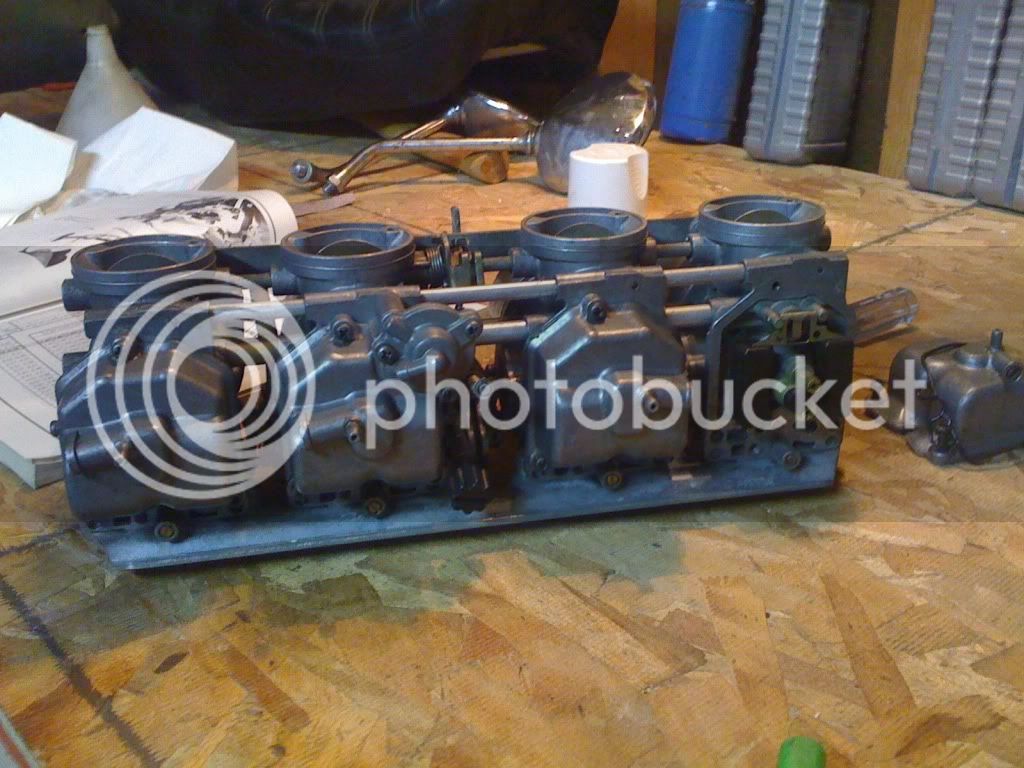 Pulled the choke out and spun it over. VROOOOOM VROOOOM. HOT SHIT IT'S ALIVE!!!!

No blue smoke but running lean. The idle wont drop for a few seconds.

The PO told me he could hear a rattle on decel. and so did I.

Pulled the valve cover to find this...sorry the pic sucks but you can see where the cam chain has been slapping on the cover. 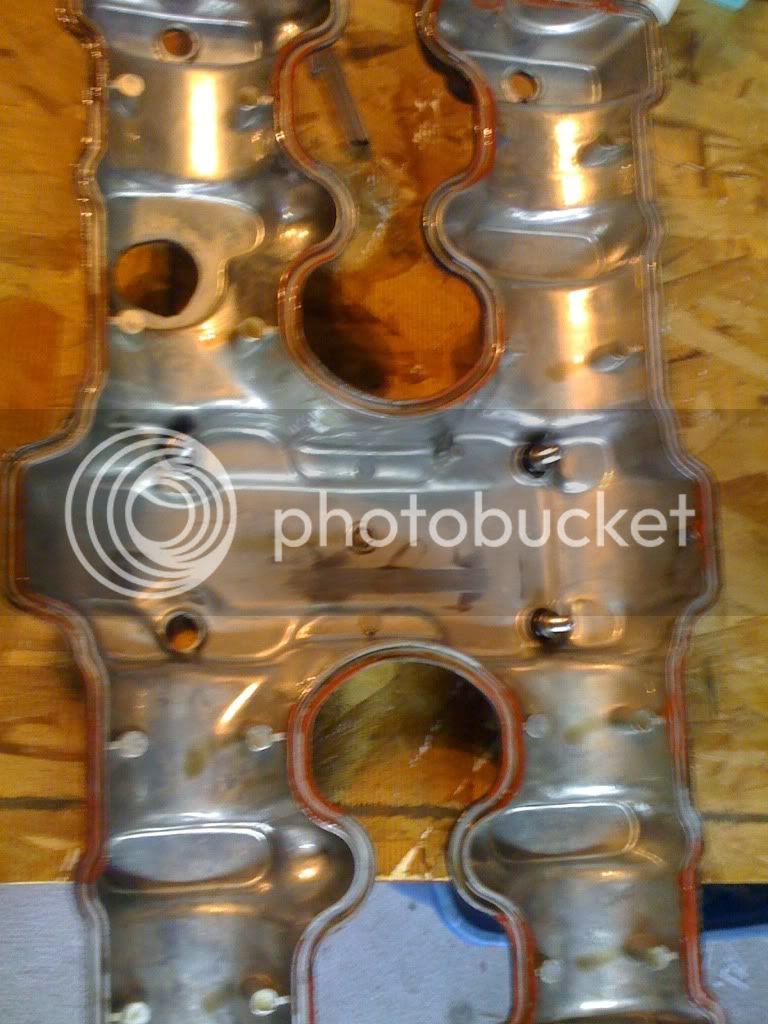 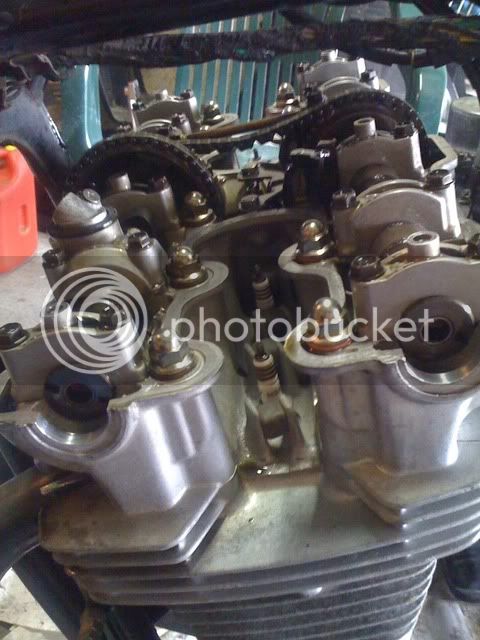 This is whats left of the cam guide. I found it in the pan. 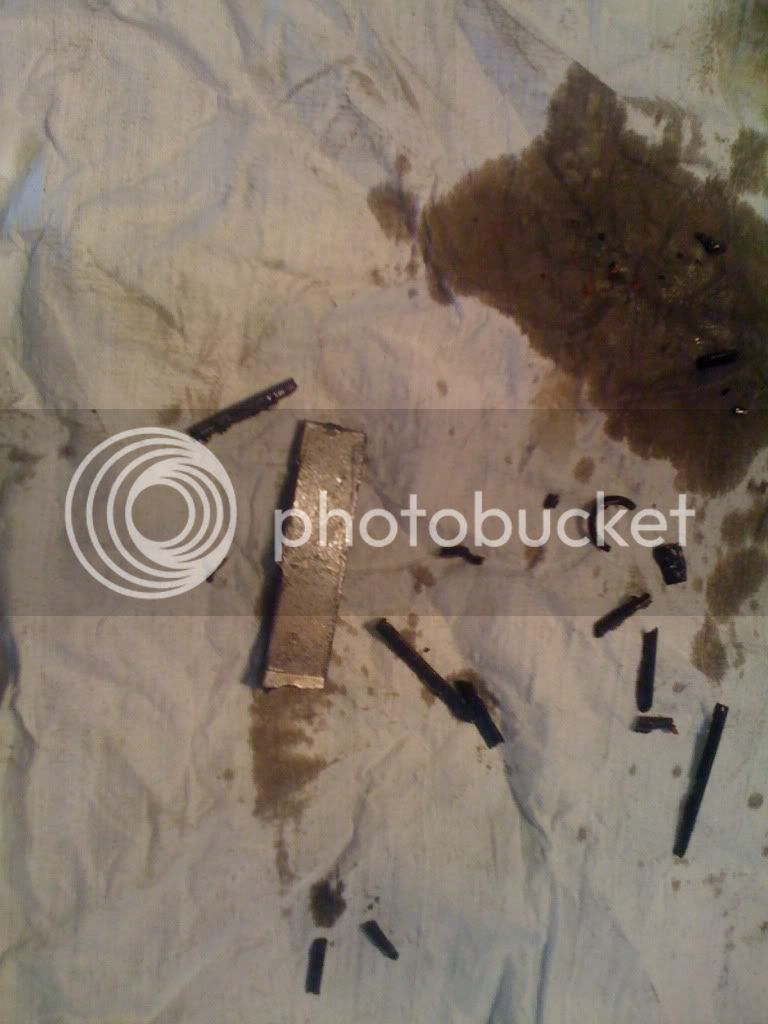 After finding the chunk of guide in the pan I figured I should at least rinse the poor old girl out. Took a gallon of clean #2 diesel fuel, and ran it down the cam shute. Did this several times till it ran out clean and I was happy with it. I buttoned up the bottom end and changed the filter.

Got a new/old cam chain guide of ebay and installed. 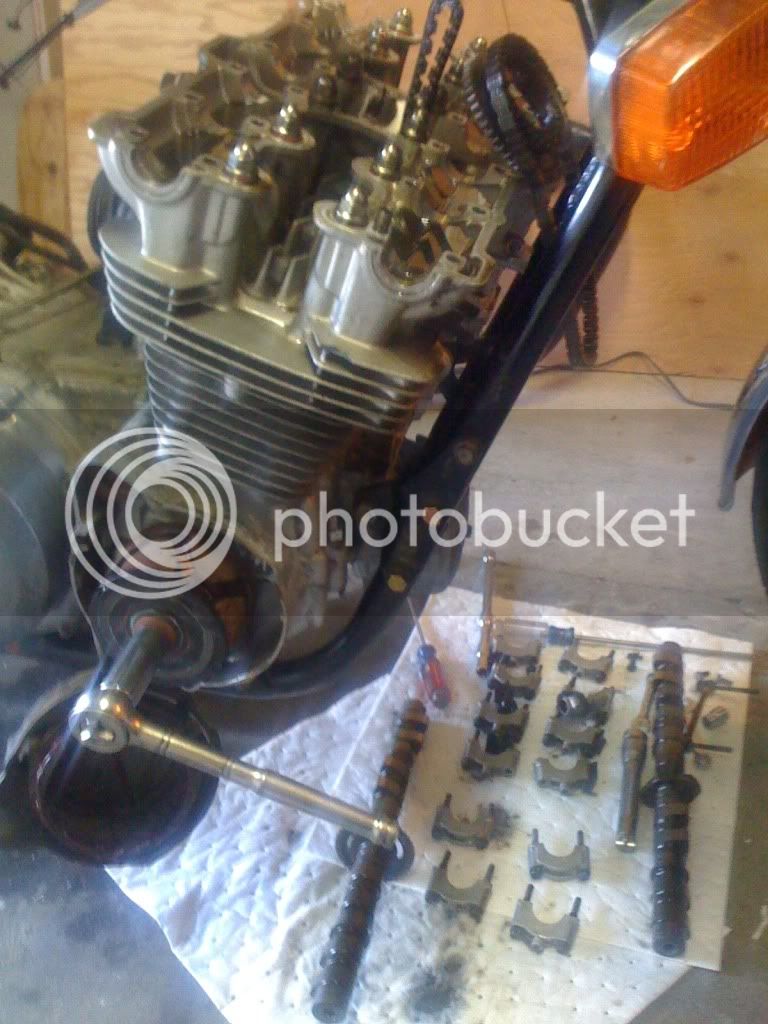 Found the root cause of the failure. The tensioner broke. 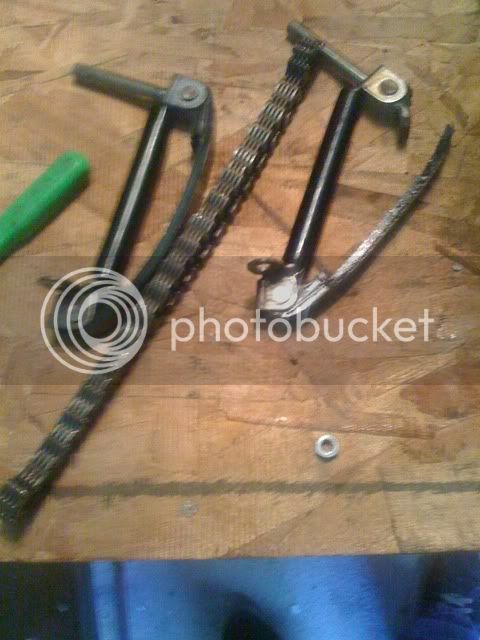 Reassm. all the cam shit, what a PIA but it was what it was. Hooked up the carbs. tank, and exhaust. Filled with some 92 octane , pushed it outside the garage (if it catches fire), and rolled it over. No choke and it fired up. Gab helmet and took it around the block. Trans all works good so it's time to take it down. Here it is in all it's glory! 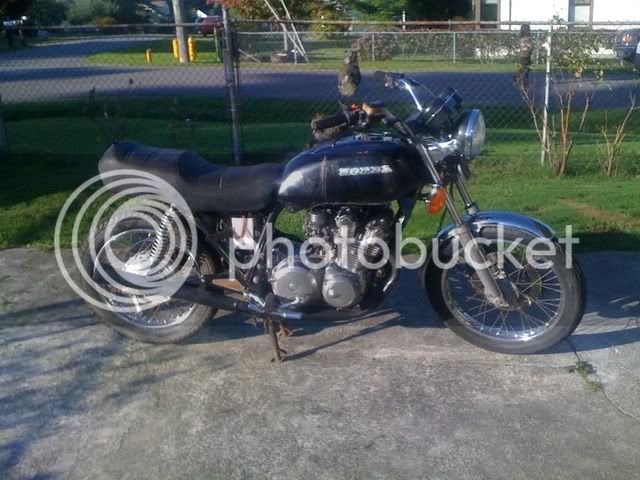 Nice find! All the people down here in Florida think bikes like that are still worth 2k+. Wish I new bike mechanics otherwise I'd find a beater too and fix her up.

Pulled the engine last weekend. Hell of a heavy damn thing. Did it alone which was all the more fun. Gave it a jerk and clean and got it up on the bench. Christ all mighty!! 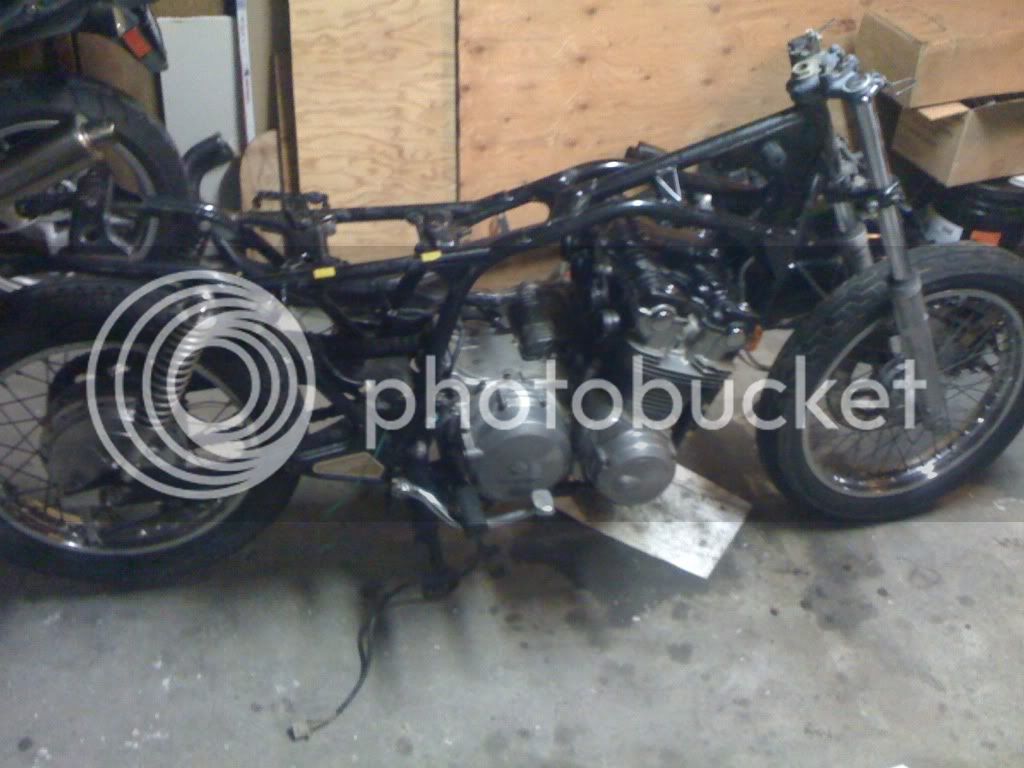 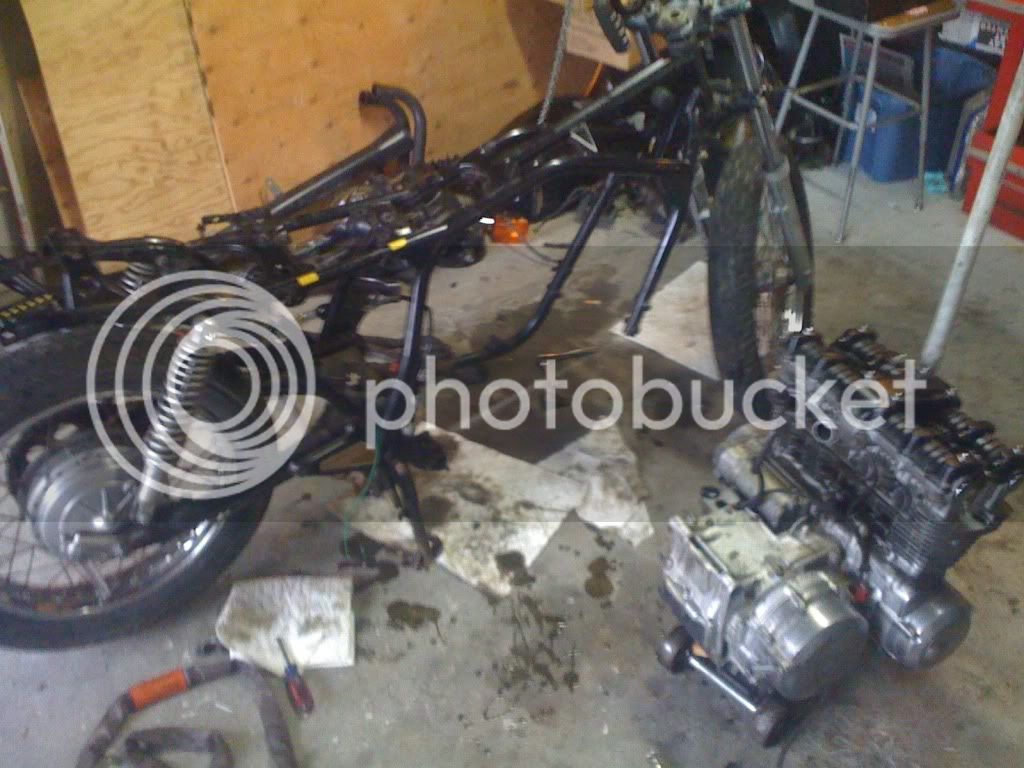 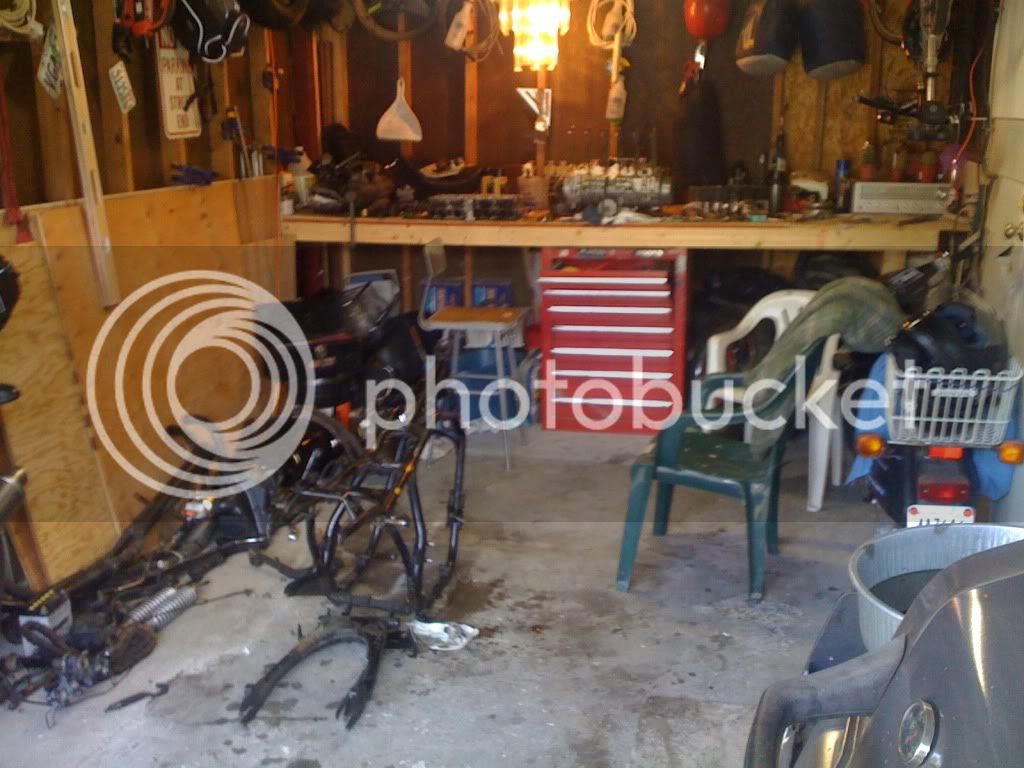 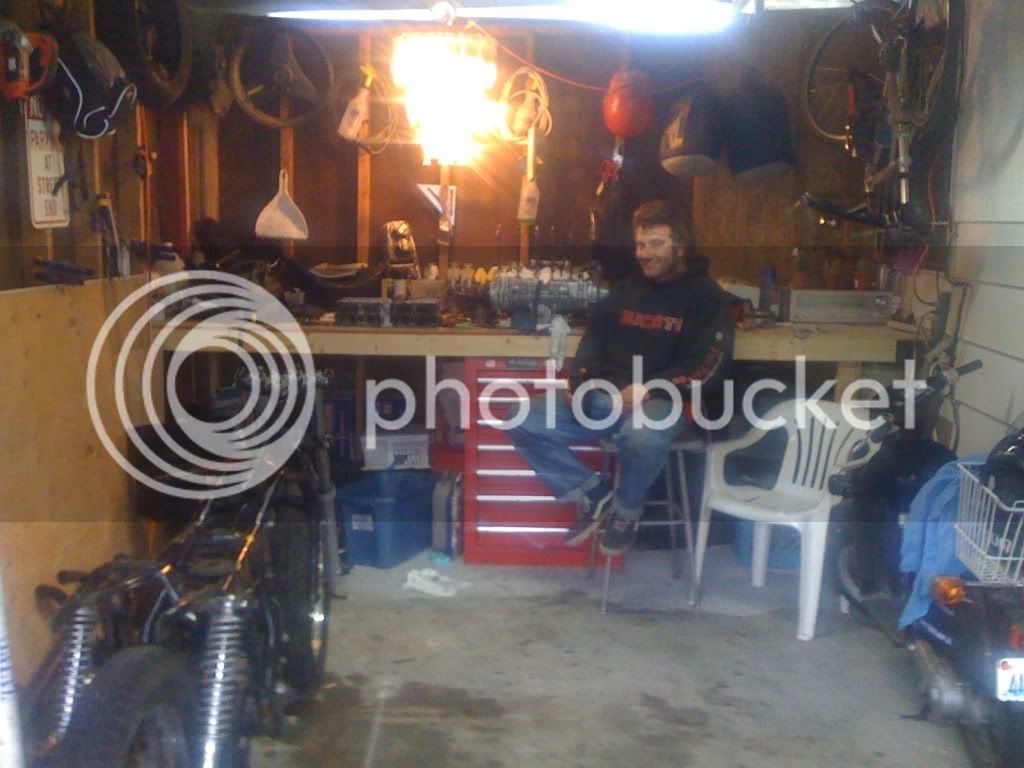 So DOHC guy's. if you pull your engine and did not take the alt off first you can use you rear axle as a puller bolt. If you've taken the top end apart and have trouble holding the crank. Take two long half inch bolts' 4-5", cut the heads off and make them into studs. Put them into the wrist pin holes of the #'s 1 and 4 rods so the threads stick outside of the case. Bring the crank around nice and easy until the studs are flush to the case and tighten up the puller bolt. Keep the threaded end of the studs OFF the case as this will make grooves in the gasket surface. BE REALLY NICE TO THE SMALL END OF THE RODS! Tighten puller and smack it with a hammer it "should" come off mine did nicey nice like. 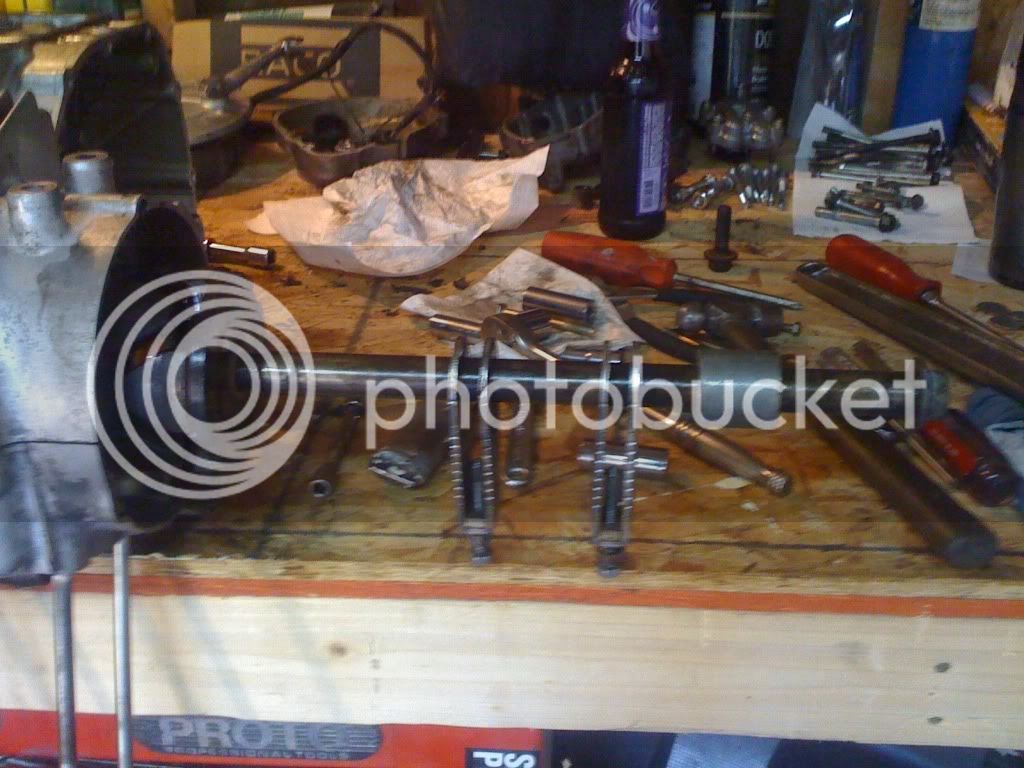 So hear it is as of about wed. night. 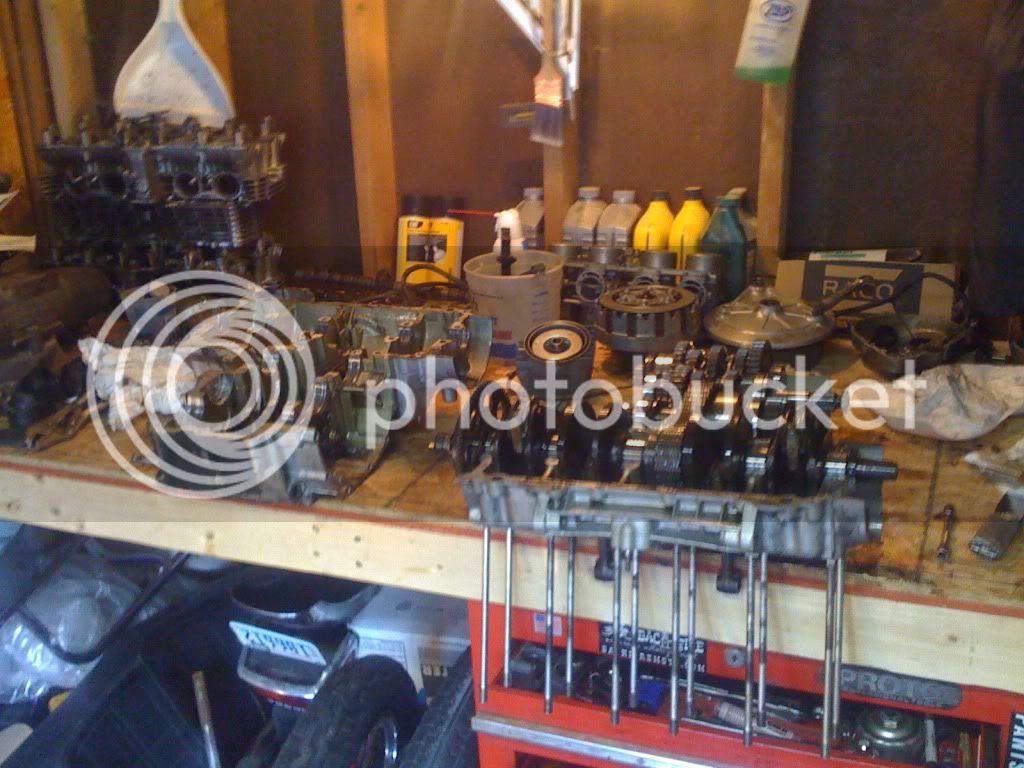 Gotta clean cases, hone and re-ring, and reseal it all.

Quickie update. Got my cases, head, and cylinders cleaned and honed this weekend. New ring set on the way. Got my newish cam chains too along withall the guides for 36 bucks = sweet. 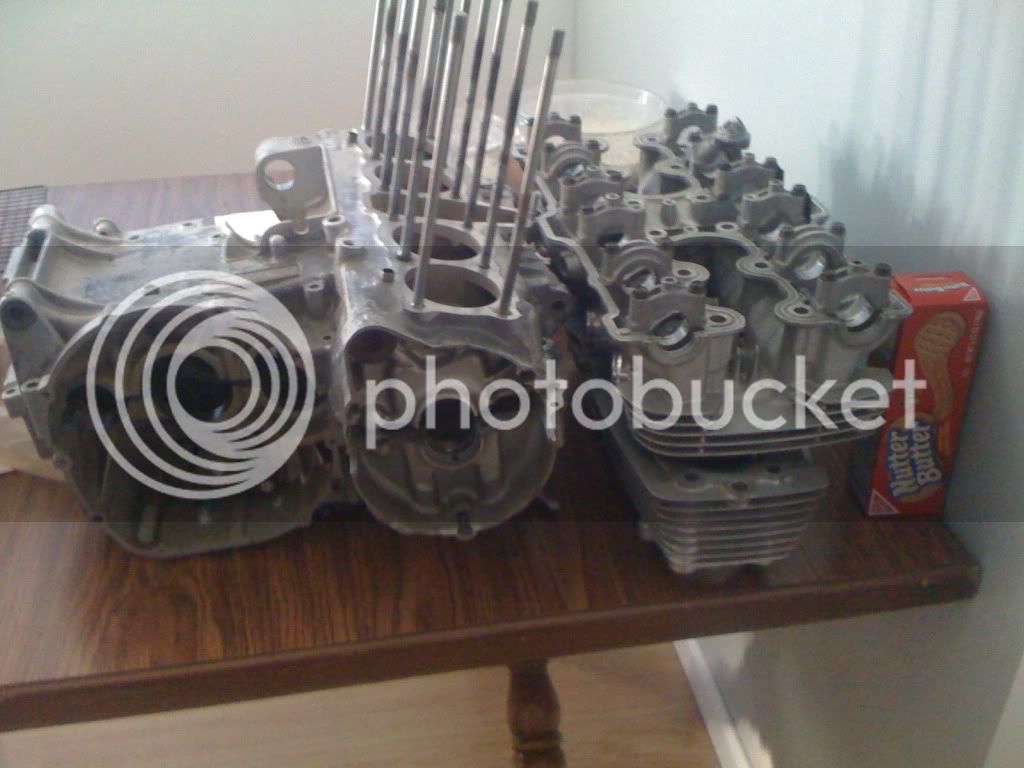 Heres a quick vid on cleaning the carbon off your valves.

I'd recomend puttin some wire over the primary chain tensioner to hold it down while joining your cases back together too. 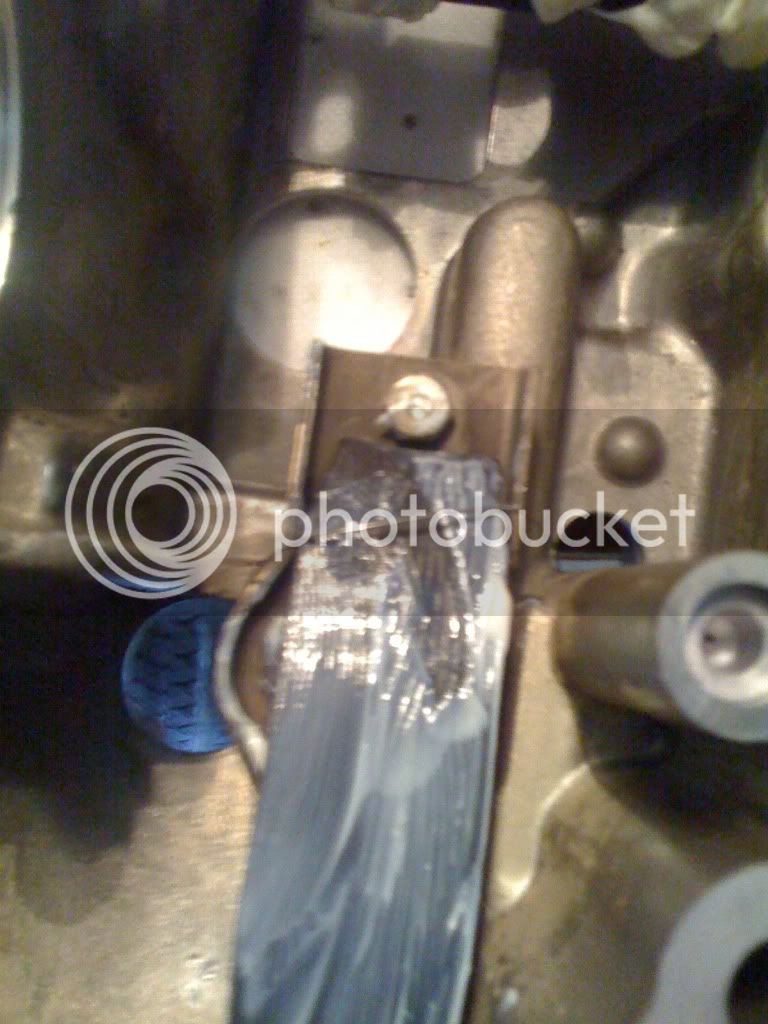 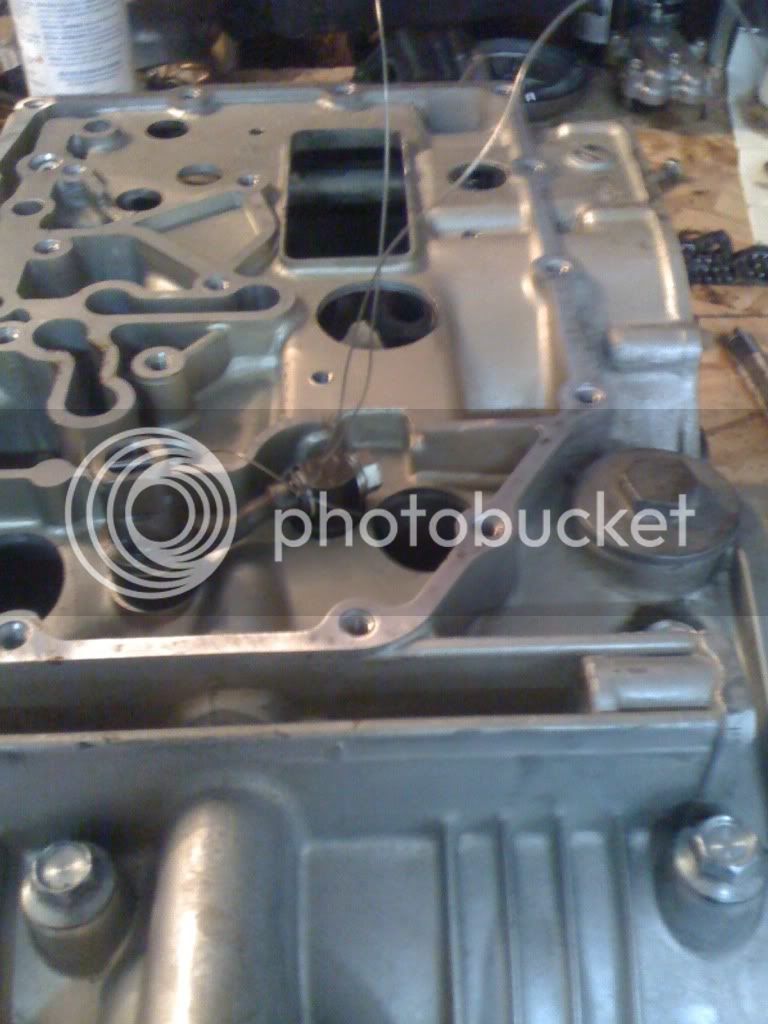 Nice, man. Can't wait to see it come back together.

Thanks Indie, yours looks good too keep it up! I've searched and searched and theres not alot of info on the DOHC bikes so that's why all the pics. Maybe help another out someday.

got the bottom and topend back in one piece! 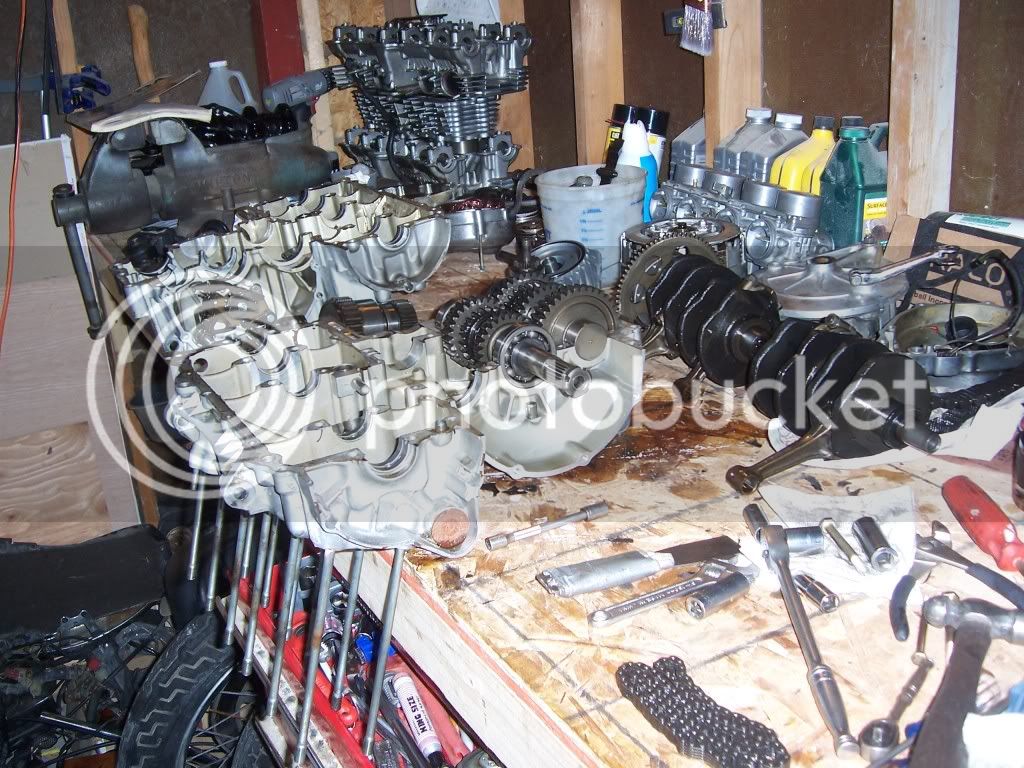 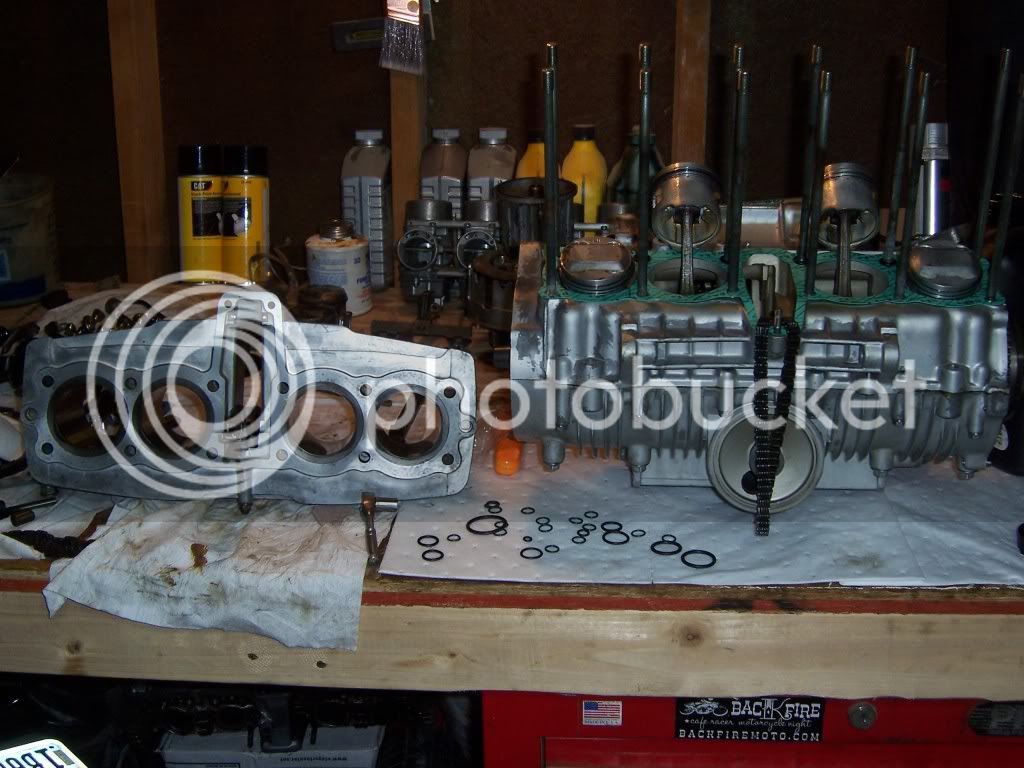 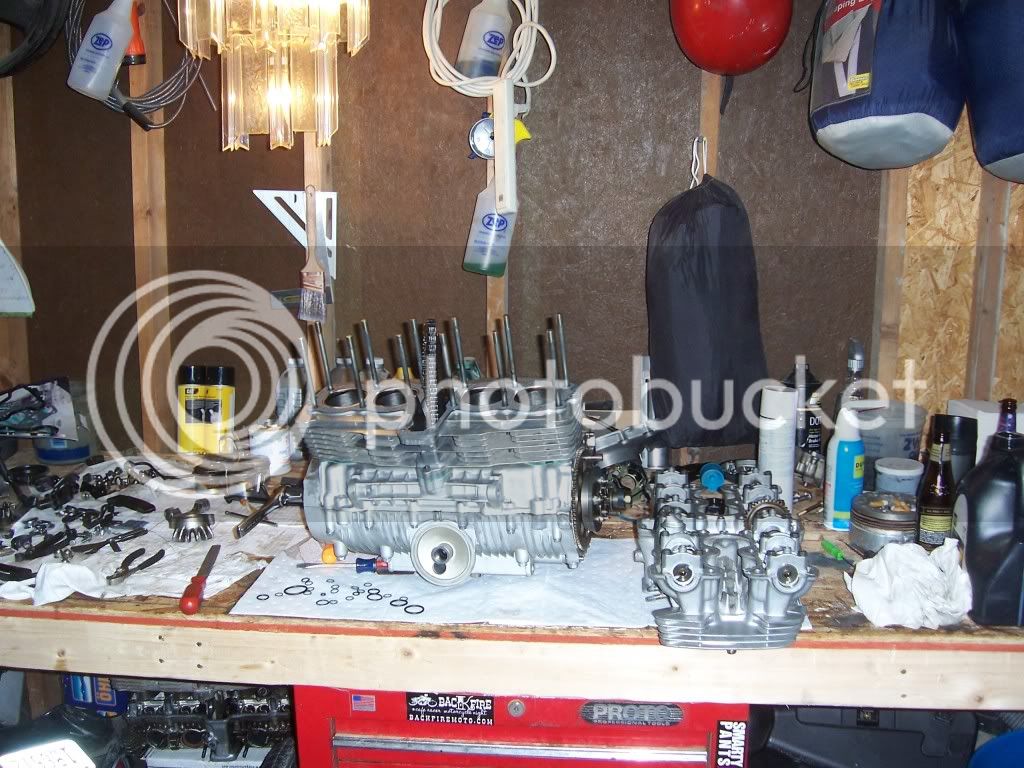 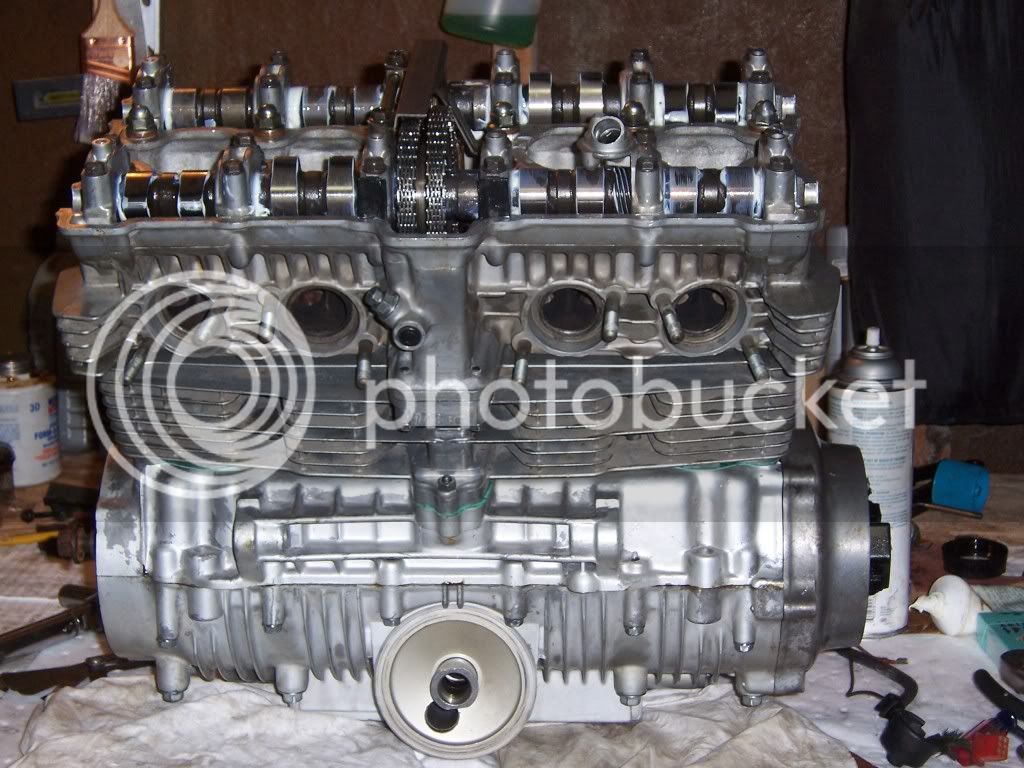 Is what it is!
Valves adjusted and chains set up. Nice to have the engine back together thats for sure. ???
R

"Long after I rest, my steel will live on"

i clean valves in a similar way... chuck them up in my press drill and hit them with sandpaper. DO NOT touch valve seat... carbon doesnt build up there anyway.


its also an old trick to straighten slightly bent valves

I love watching a good wrenching. Watch that you don't blow your sacroiliac on the ol engine deadlift. So few good mechanics left.

i clean valves in a similar way... chuck them up in my press drill and hit them with sandpaper. DO NOT touch valve seat... carbon doesnt build up there anyway.


its also an old trick to straighten slightly bent valves

I had originally split the cases to put a new "a" chain in it. the one from the crank to the cam. Once It was split I found water damage in #4 cylnder which shit canned the cylinders. I also got another set of cyl. when I boughtthe bike but were never opened by the PO. So I was thinkin; sweet I got another set of cyl.! Well I did but they were water damaged too! So I went on Ebay and found a top end for 50 bucks + shipping so I bought it. The cyl. were honed and the head came apart for new seals and a good cleaning. Took it all to work and cleaned everything. brought it back home and set it all up. I'm sure someone will shake there head but I actually hand sanded the very last exh. valve shim to get the .005 I needed. What a complete pain in the ass. Those things are like sanding a frigin' piece of granite. Hard as ell I tell ya.
So I got an extra head and 2 sets of cyl. + all of the cam and primary
chain tensioners if anyone wants them just pay the shipping and maybe 10 bucks for beer and you can have them shipped in the lower 48. 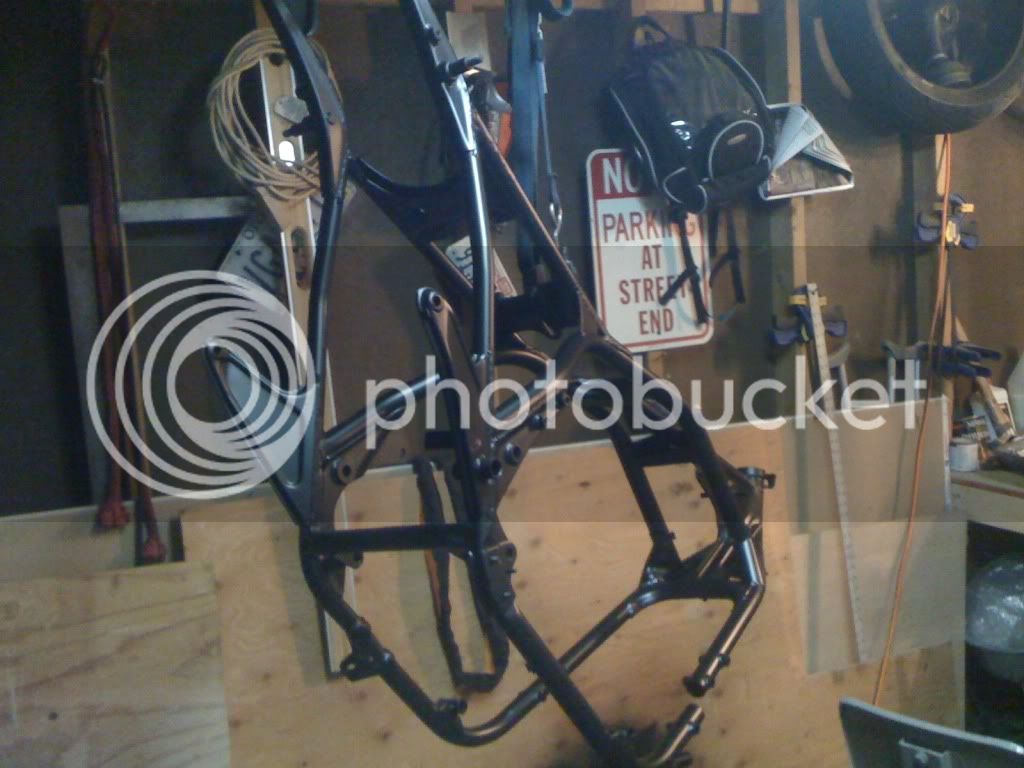 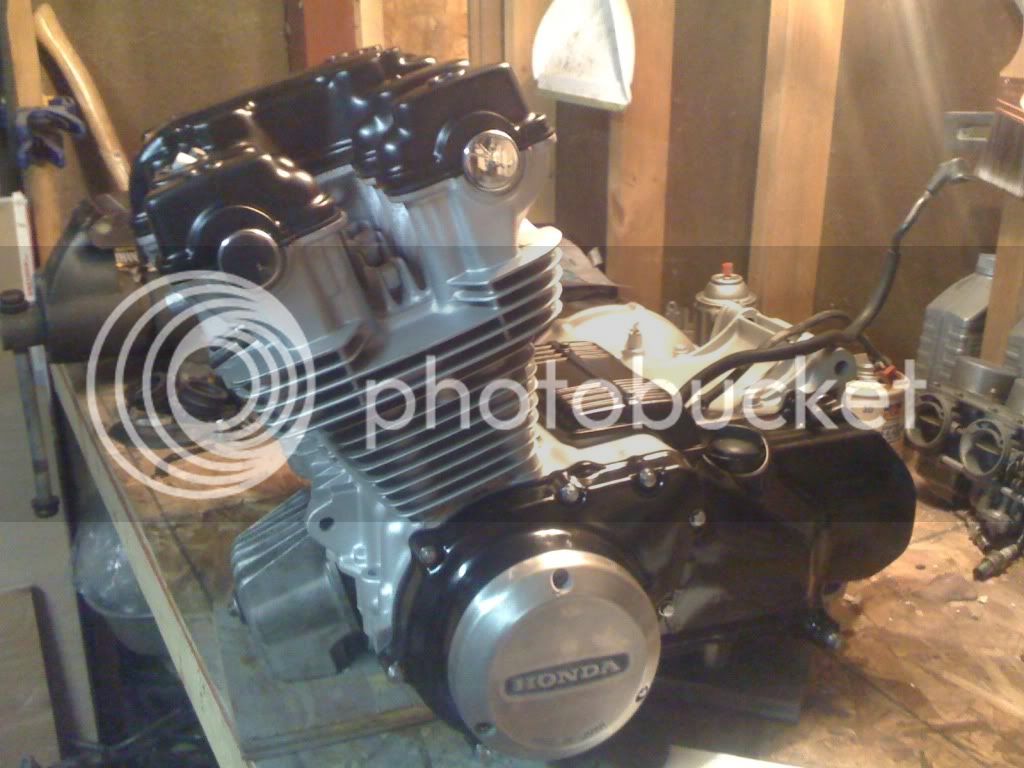 Laced up the wheels today with new spokes. 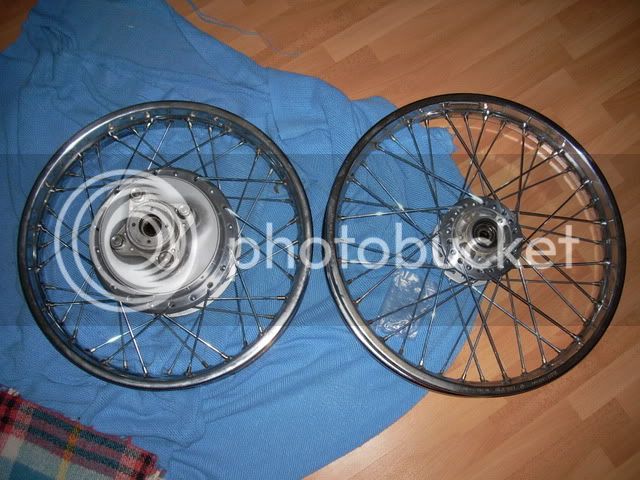 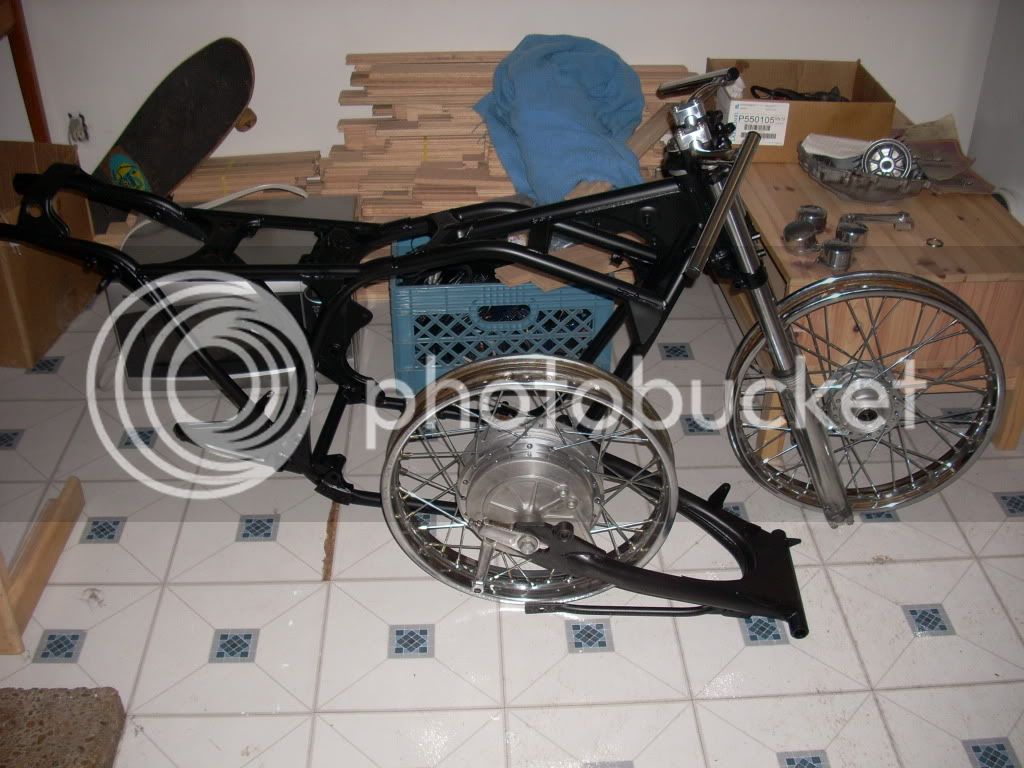 Had my pop's make up some new bar clamps. I dont know why Honda put the fuses there of all places?!? 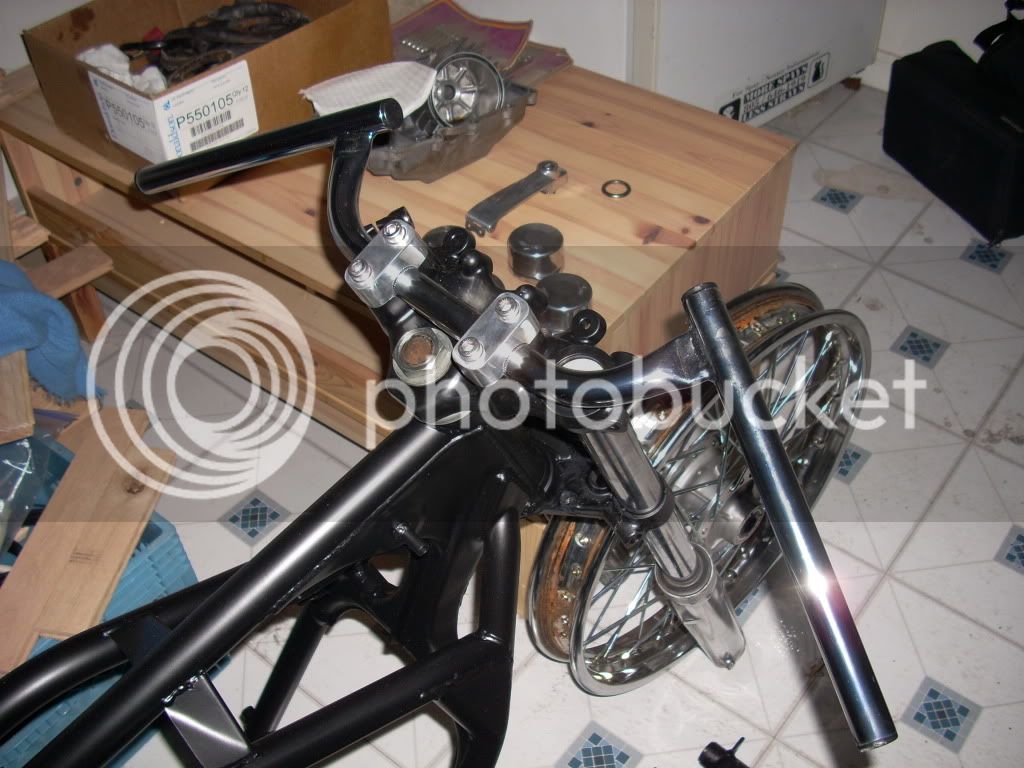 Clean Clean Clean Anyone know of a good set of tires for these old girls?
C

Great build thread Thirsty 1. I'm in awe at how far you've torn that engine down, needless to say I won't be going that far into mine without major incentive (as I'd never get it back together without a lot of help)

Looking forward to seeing what you do next, thanks for all the images.

Casual said:
Great build thread Thirsty 1. I'm in awe at how far you've torn that engine down, needless to say I won't be going that far into mine without major incentive (as I'd never get it back together without a lot of help)

Looking forward to seeing what you do next, thanks for all the images.
Click to expand...

If you ever need some help with engine let me know. There actually pretty simple once you take it apart and look at whats going on in there. I got a few parts if you need them I'm in Seattle.

Still have alot to do but I got lots of time and time is free!!

Therapy is expensive. Riding is cheap. You decide.

Let me know how it goes when you squeeze the engine back in the frame. I scraped and scratched the hell outta the factory paint trying to shoe-horn that thing out of my '79. After I powder the frame, I'm scared to put the engine back in!
C

I had the same issue, trying the put the frame back over the engine to bolt in by myself. Not Fun! After twisting, pulling and swearing at the thing for 15mins I had a quick rest, tried again and in 2 secs it slipped on easily (also trying not to take paint off).

Moral of the story: There must be a trick to it ;D

my-79-750-k said:
Let me know how it goes when you squeeze the engine back in the frame. I scraped and scratched the hell outta the factory paint trying to shoe-horn that thing out of my '79. After I powder the frame, I'm scared to put the engine back in!
Click to expand...

Ya I'm alittle scared of it myself. Lots of blue painters tape over the rails and no drinking till it's done. I need to make a perch for the engine and then wrap the frame around it. Found out my rear wheel has a flat spot in it too. So now I gotta take the wheel back apart and lace up another hoop. Lame!

i built it, therefore its mine...

Nice clean bike. Wish I was closer to seattle, I would just roll my bike down and have you take a look at it. I'm having starting issues and I'm pretty sure its the carbs just afraid to do to much (aka get it right the first time or wife is going to shoot me). I'm hoping its just a lil cleaning and slight adjustments that need to be made (fingers crossed). Anyway, real clean bike and love the pics of the engine work. Will def reference this thread when it comes time to overhaul my bike.

^^^^^^ try here. http://www.cb750c.com/ Tons of good info. These guys are more into resoration and not custom jobs. Dont mention pod filters you wont get anywhere with them at this site. Good people though.
You must log in or register to reply here.
Share:
Facebook Twitter Reddit Pinterest Tumblr WhatsApp Email Link