DTT SUPPORTER
DTT BOTM WINNER
That looks great. Not sure why you need special oil cooler mounts, just swap out that black zip tie for a green one and it'll hold into the 22nd century. It'll probably be good for 18 additional hp and 15 to 20 mph as well.

ridesolo said:
That looks great. Not sure why you need special oil cooler mounts, just swap out that black zip tie for a green one and it'll hold into the 22nd century. It'll probably be good for 18 additional hp and 15 to 20 mph as well.
Click to expand...

Itll already be hard to keep the front end down. Not sure it can handle that much extra

DTT SUPPORTER
DTT BOTM WINNER
Turned a few parts on the lathe. Cut, drilled, filled and sanded another. Now the oil cooler is mounted. Between the thickness of the manifold and clearing the motor mounts with the oil lines, it's sitting a bit farther out from the down tube and also a bit farther forward than I'd have liked, but I still think it's ok. I feel that the fins match the cylinder and the overall look well.

That looks good to me. you are right that it matches the engine well.

Maritime said:
That looks good to me. you are right that it matches the engine well.
Click to expand...

A little bit here, a little bit tbere, sooner or later you have a knock-out. Well on the way, man!

DTT SUPPORTER
DTT BOTM WINNER
Over last couple days it was bothering me where the oil cooler was sitting. I stopped over to see @ridesolo and he agreed with that thought. It was too far forward and the angle of the fins did not match the fins on the cylinder head. I made up a new smaller bracket that brings it back closer to the engine and brings the fins in parallel with those on the cylinder head. It ended up being a less bulky setup as well.

DTT SUPPORTER
DTT BOTM WINNER
Yeah, it's funny, I looked at the pix of the first one and really liked the look but said to myself, "I'll bet he's going to do another bracket that has the fins paralell w/ the engine fins. Sho 'nuff!
Last edited: Mar 30, 2021

It looked fine before but I'll agree it is now better LOL.

DTT SUPPORTER
DTT BOTM WINNER
I got back on this project for a few minutes tonight. It's a subtle change, but I moved the back wheel forward just shy of 2". I like the stance much better. Less of a hillclimber look than before and it gets the fender tucked up under the seat where I want it. Wheelbase is now sitting right at 58 3/8".

I may leave the axle plates intact with the o.g. holes. I have a possible project in mind that will utilize them as mounts. 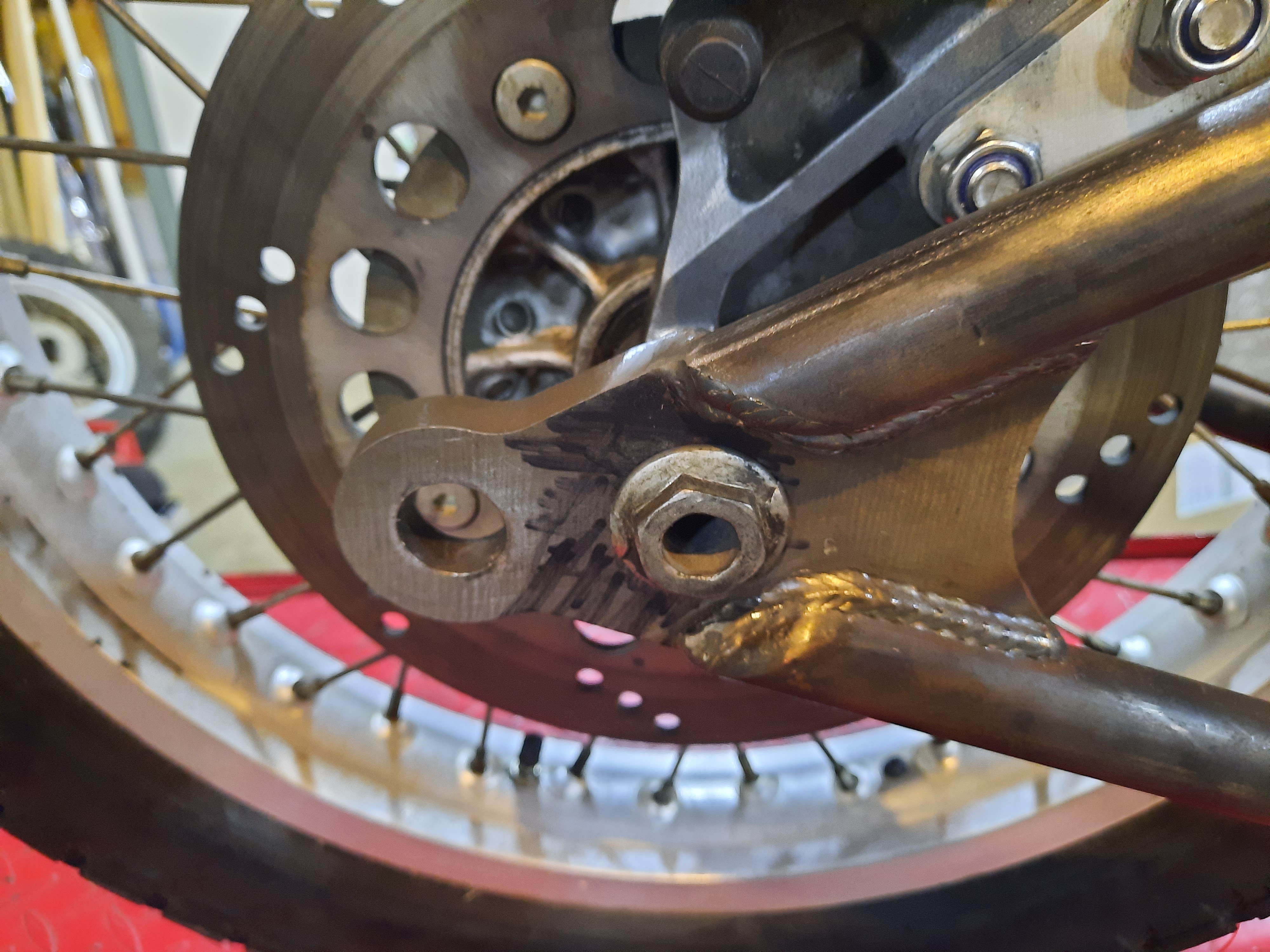 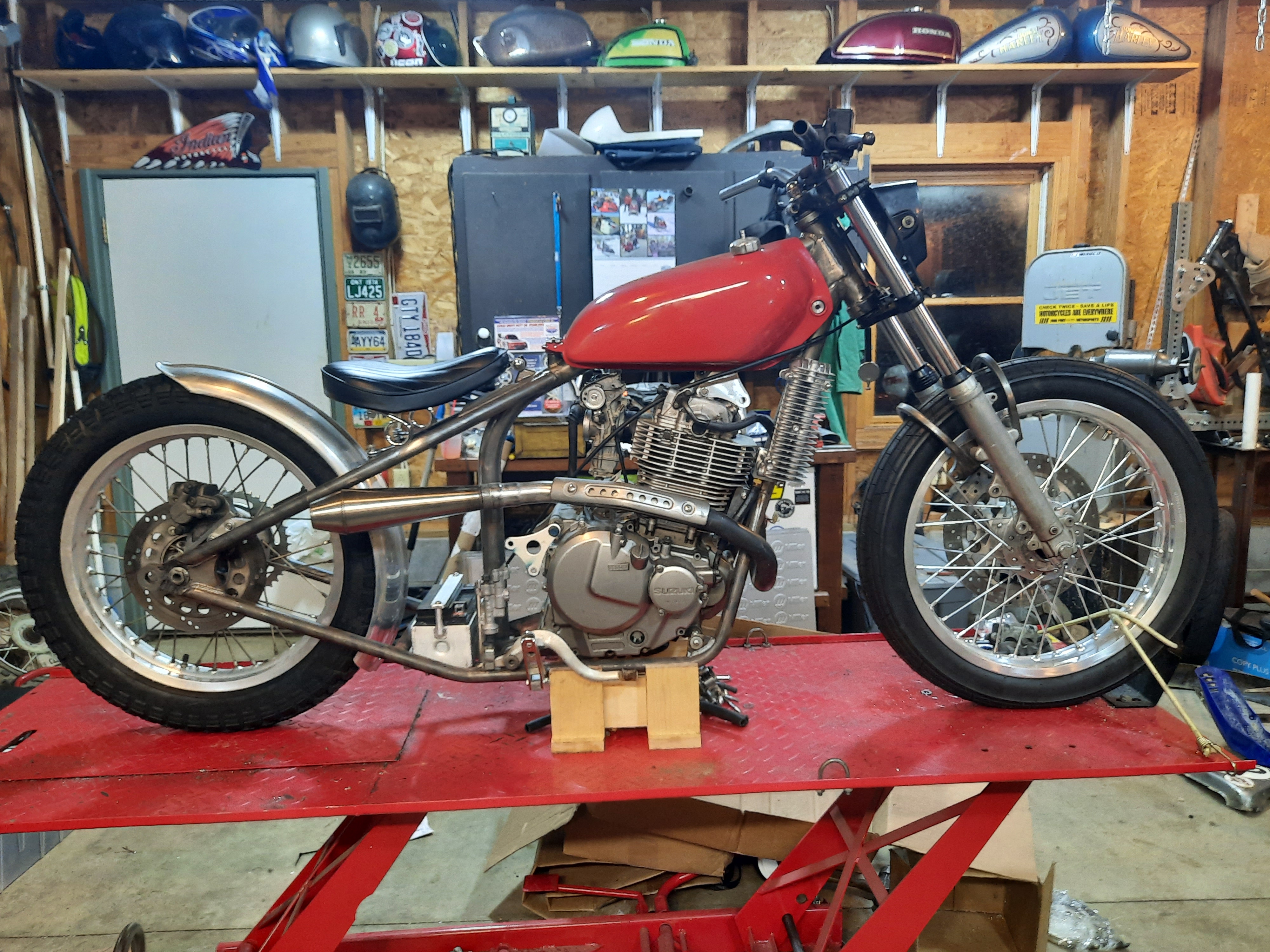 DTT SUPPORTER
DTT BOTM WINNER
Picked up a few more parts to help move this thing along. I ended up grabbing a used cylinder off of ebay. It was more expensive than I think a used cylinder should cost, but they rarely even come up for sale, as the engines rarely go bad. When they do, it's the cylinder. 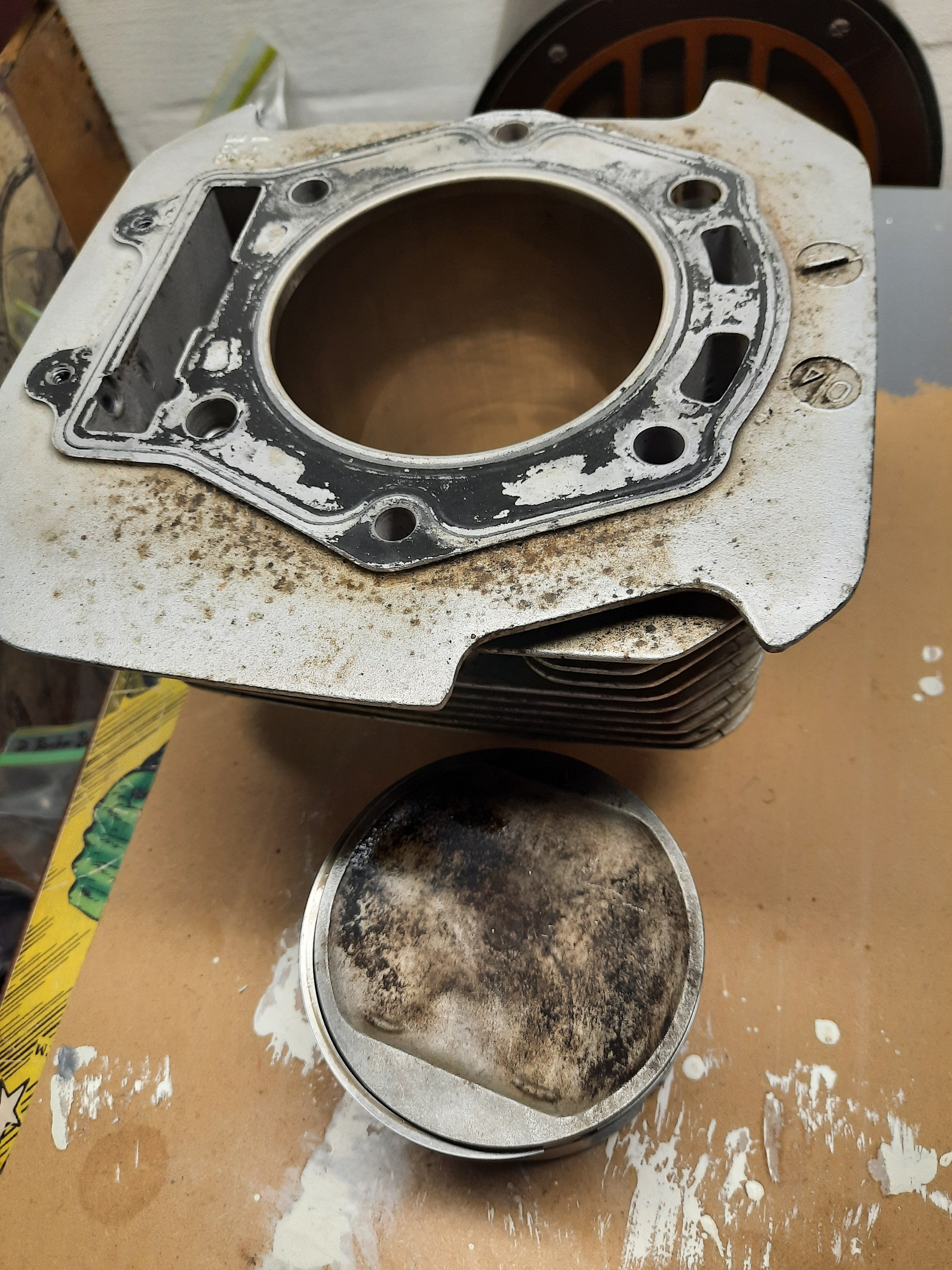 I also picked up another fcr39mx carb and a pair of the internal spring uni pods. This carb is significantly less clapped than the first one. I also picked up a basic jet kit (mainly for the needle) and a gasket kit. 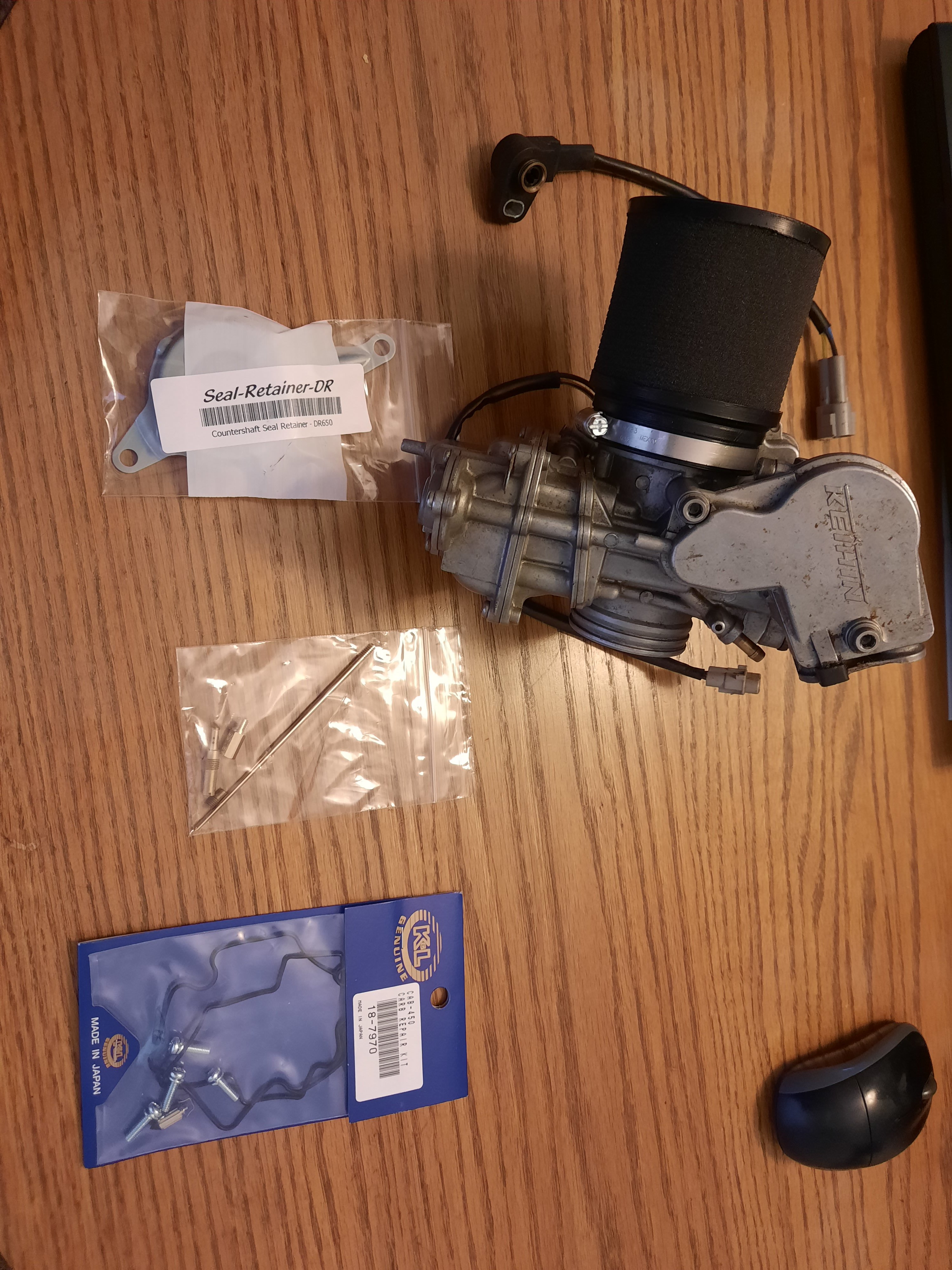 I also picked up a set of these supernova leds from revival Cycles. I'll be using them as turn signals and brake lights. They are small but SUPER bright. They aren't the cheapest things at $15 a pop, but for as bright and easy to hide as they are, I think they're worth it. 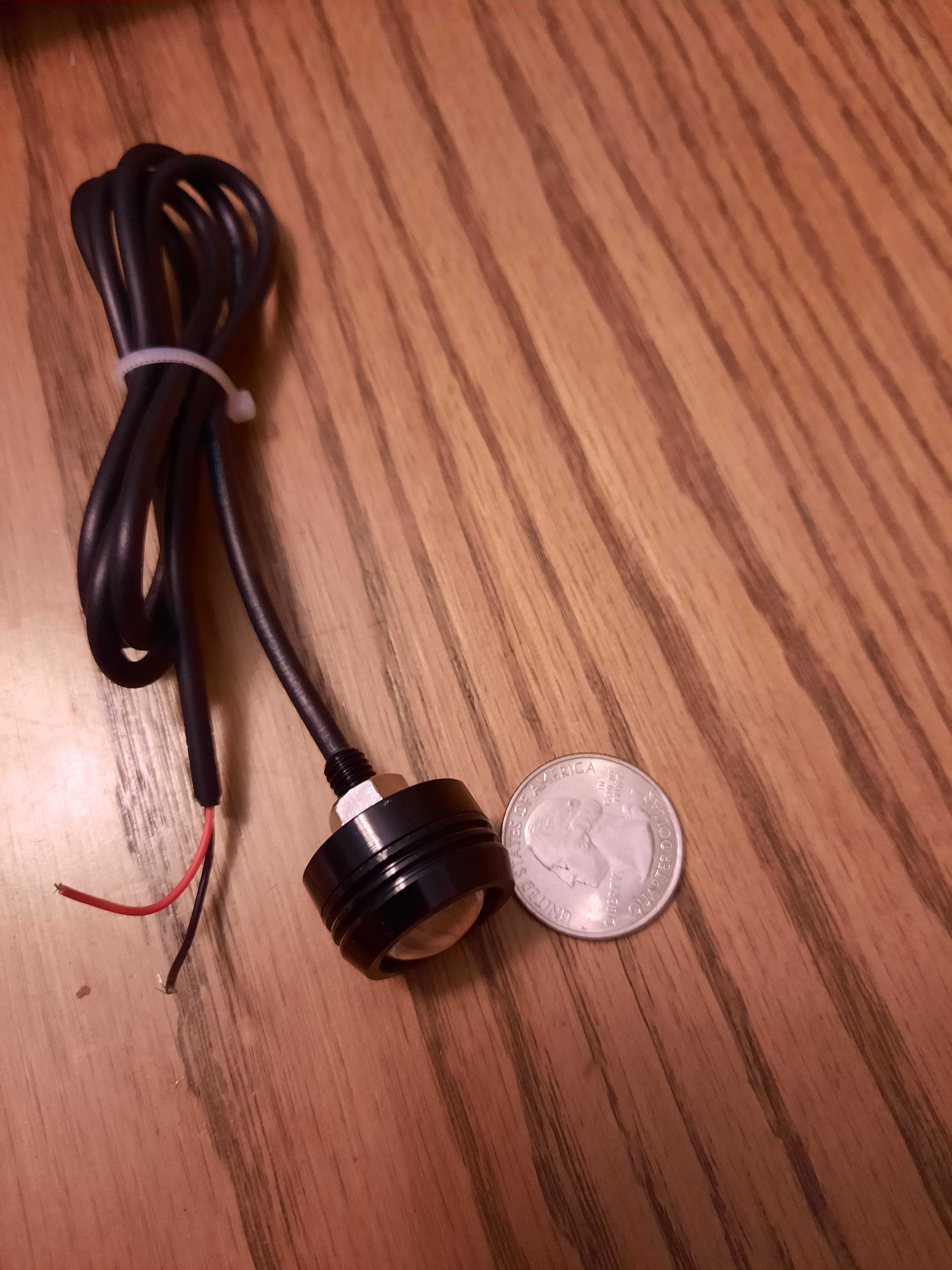 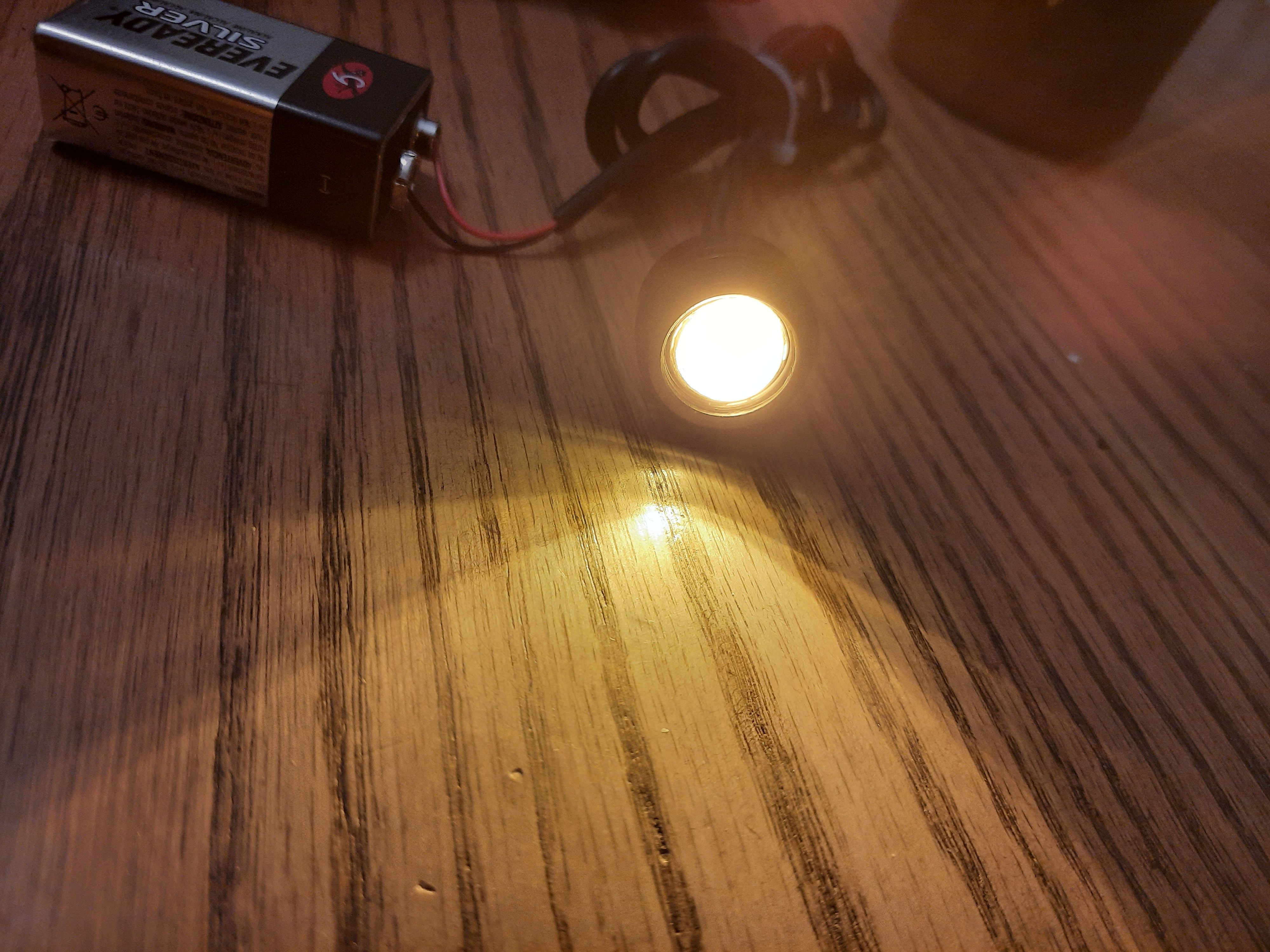 Hello
Not for my back but I love the simplicity of bobbers
Love to see parts custom made for a project.
I will follow this one

Little updates. Nothing of real consequence, but somehow updating threads keeps me motivated on projects.

I tinkered with the carb a bit. The yfz 450 carbs come with a large tps block that isn't needed on the dr lump, but they also house the idle adjustment. 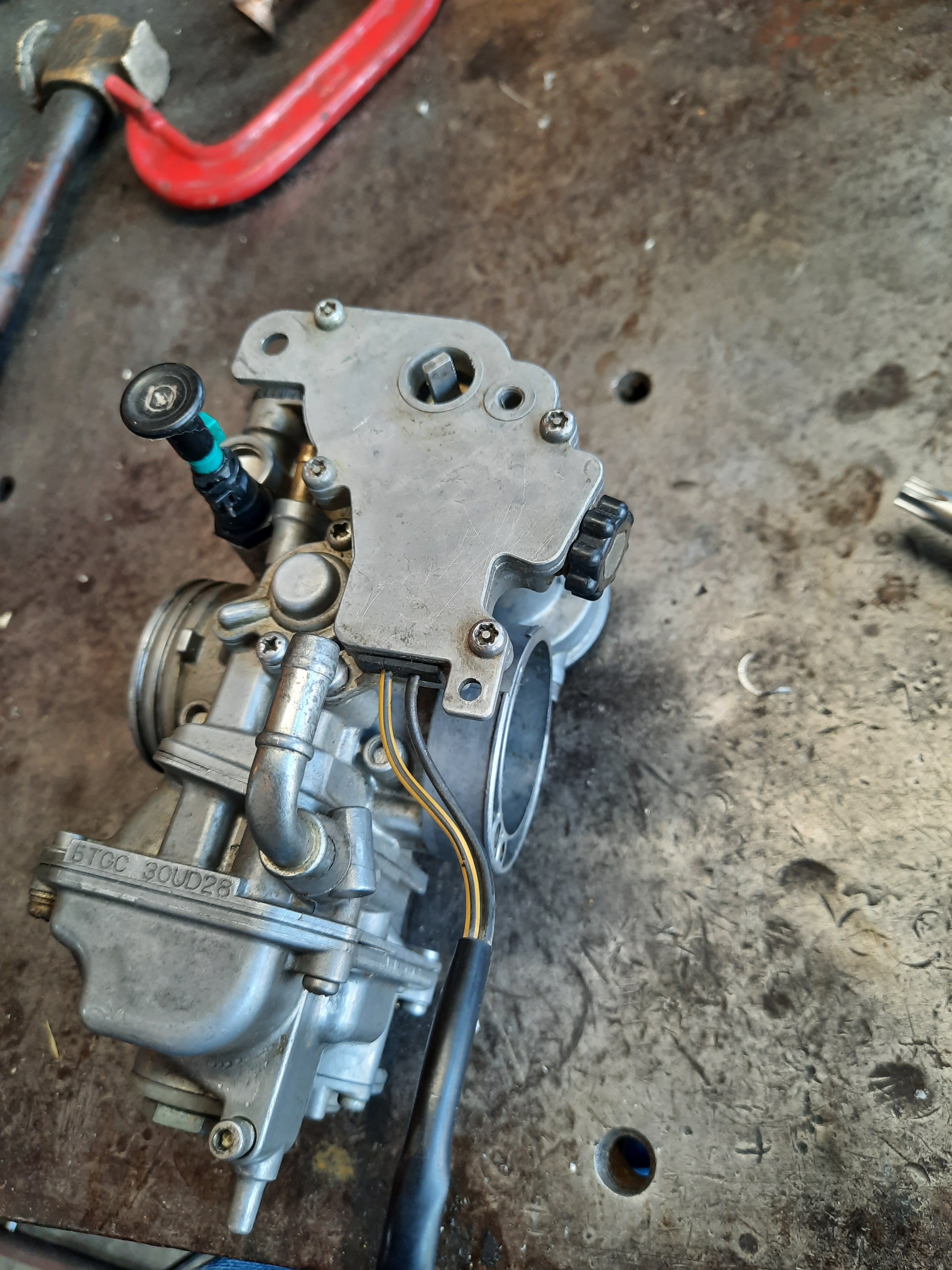 I removed the idle adjustment and tapped the hole for an 8mm bolt. I also cut down the casting to make everything a bit less bulky. I may end up making a complete bracket from scratch though. 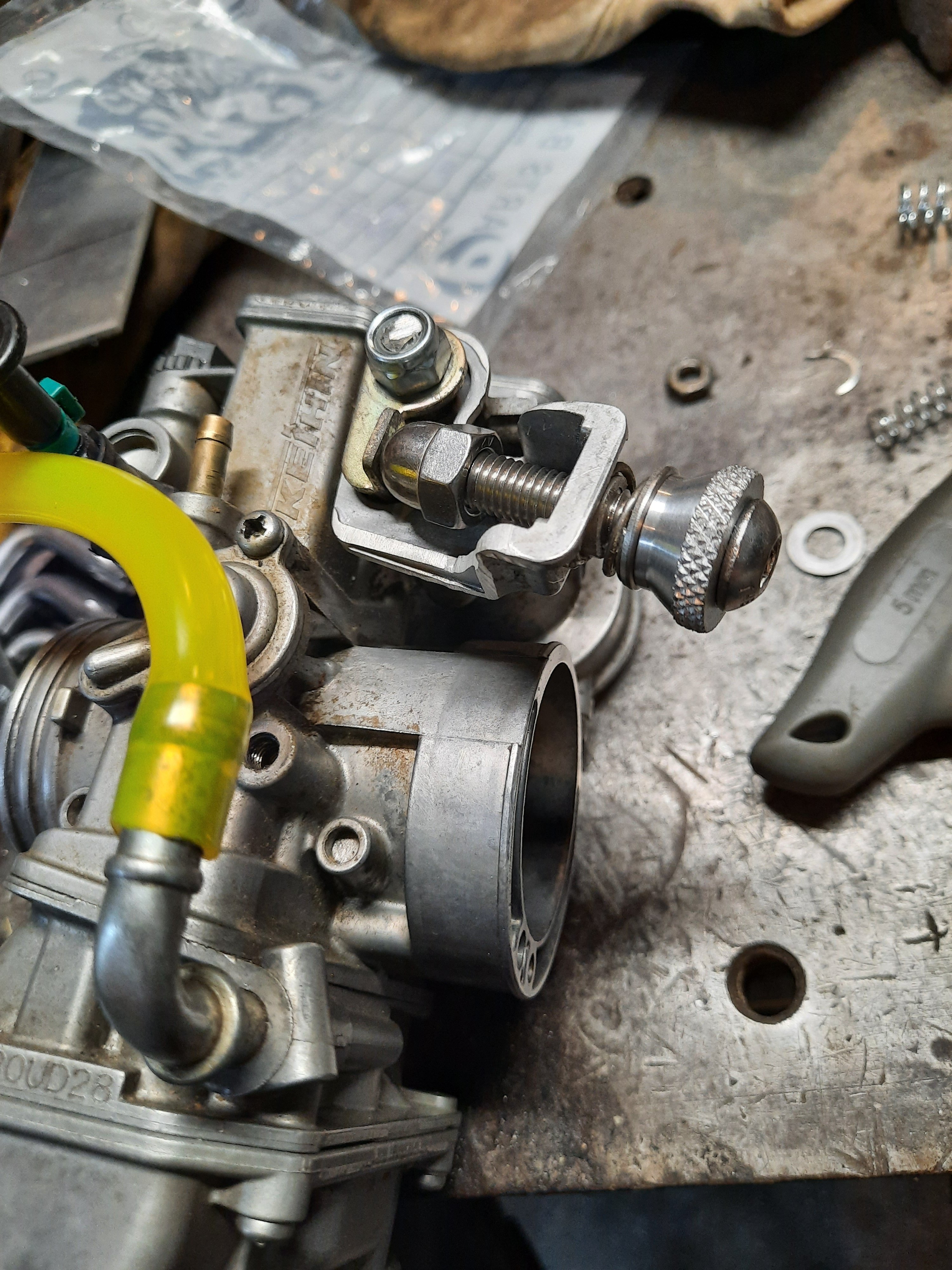 I also picked up a used motion pro twist throttle kit for a yfz450 on ebay. It along with the cable should work well. It's a very quick twist. Closed to full throttle is only about 1/5 turn. If it proves to be unwieldy to ride, I'll source a slower twist tube. 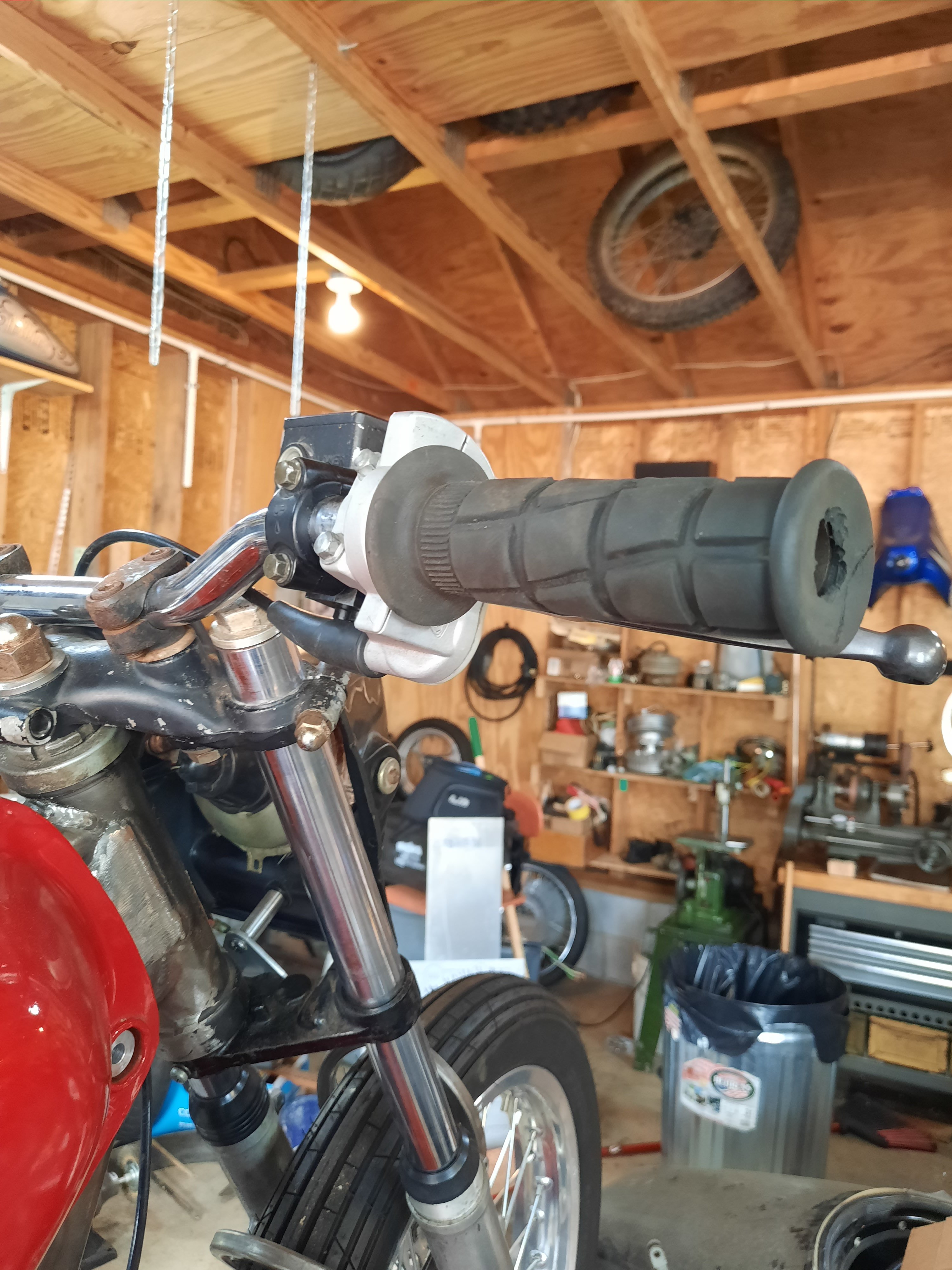 I have been trying to sort a way to mount the cone muffler without ruining the lines of the cone with a cumbersome top mount.

I ended up using the rear mount off of the stock dr can. It's all rubber isolated now, and is mostly hidden out of eye shot under the seat mount tube attached via a 8mm coupler nut welded to the frame. 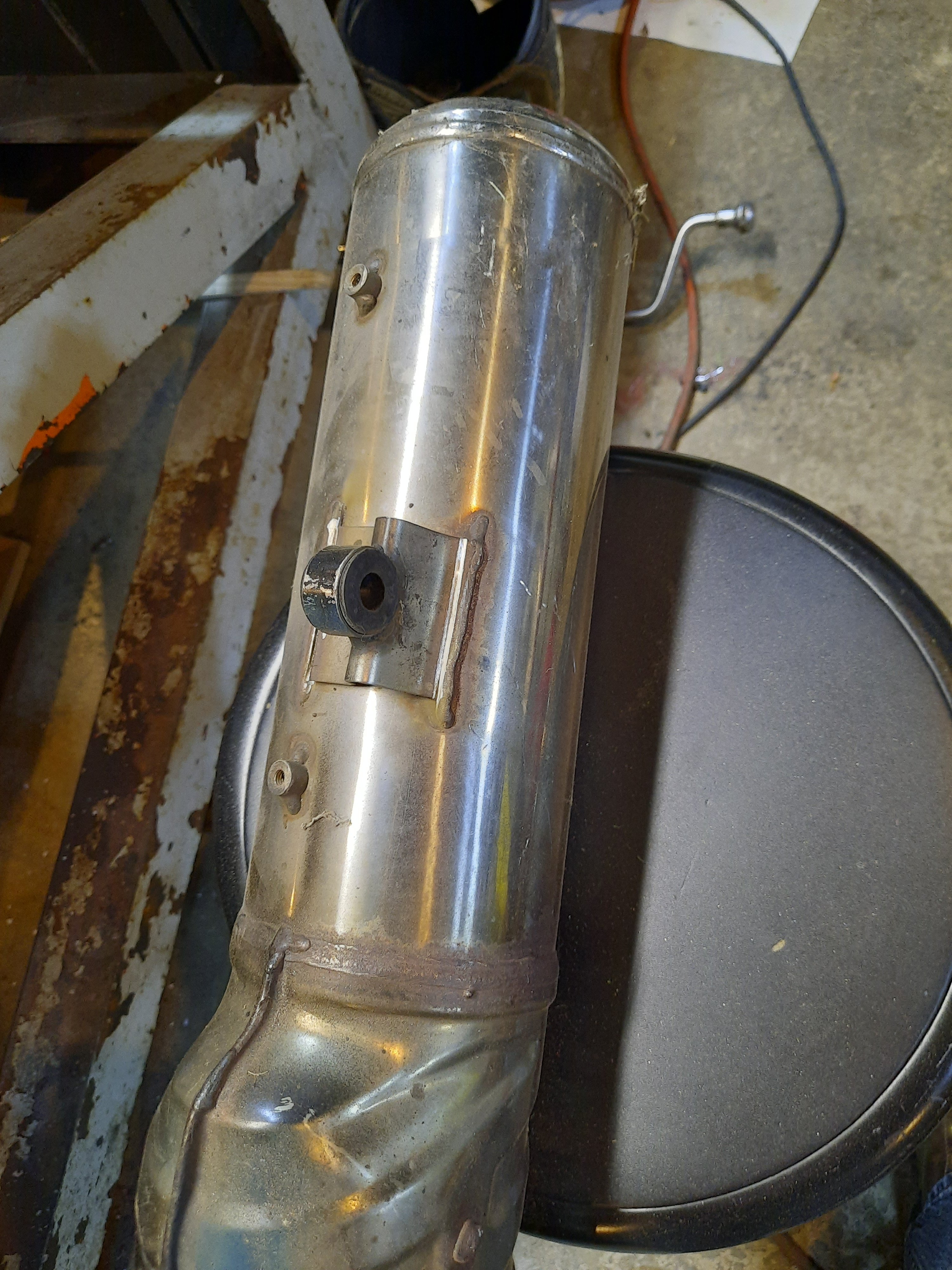 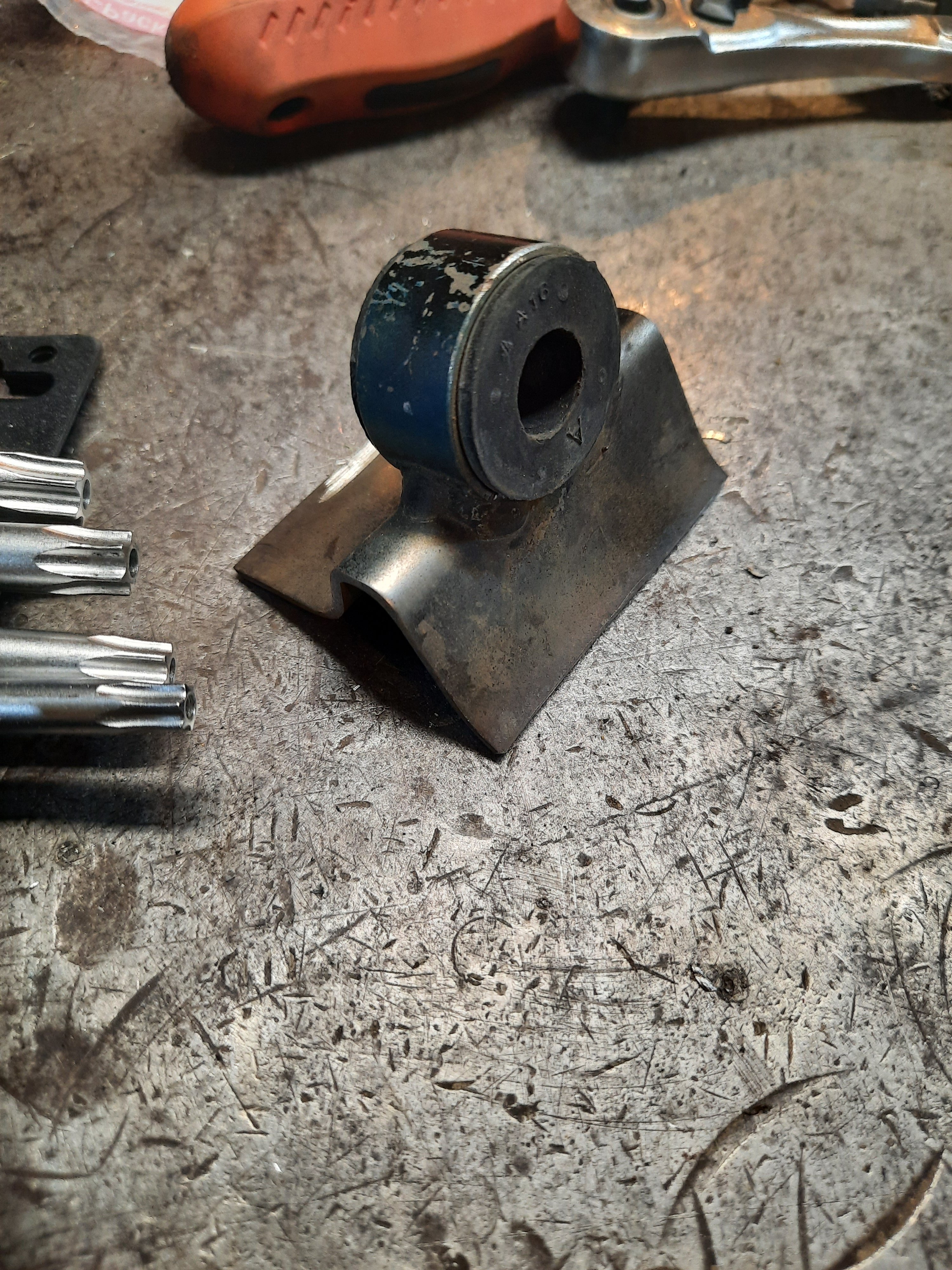 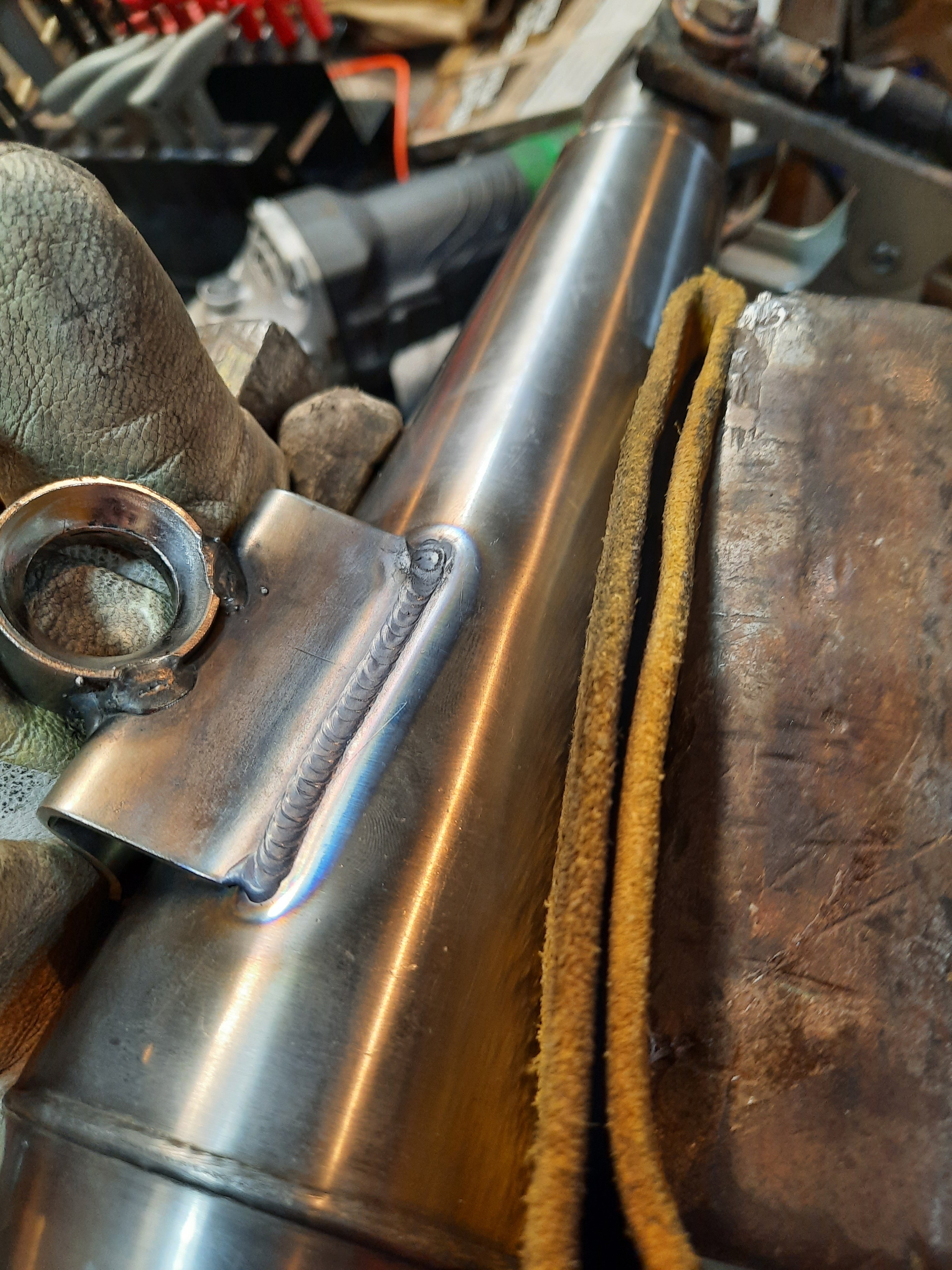 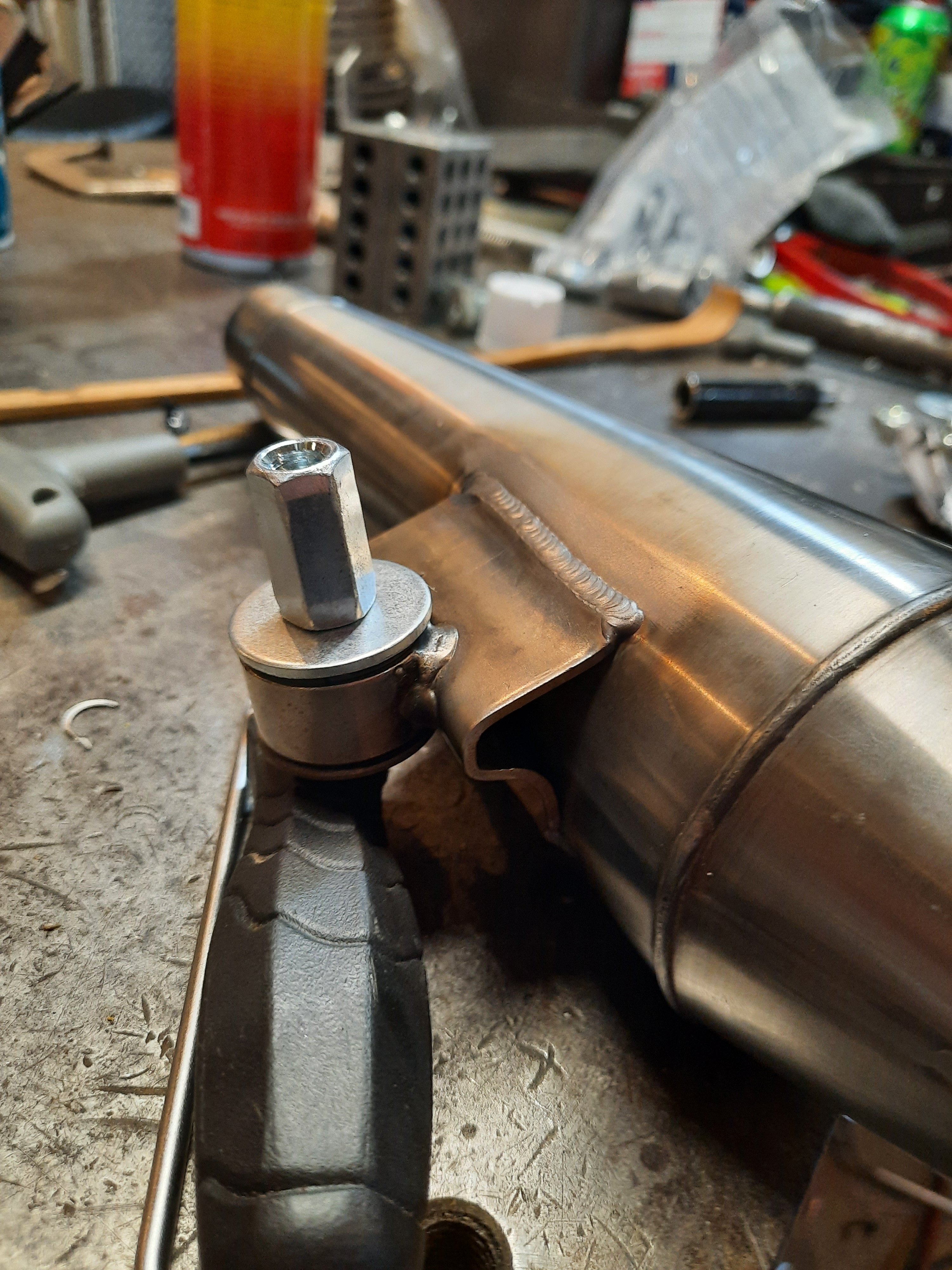 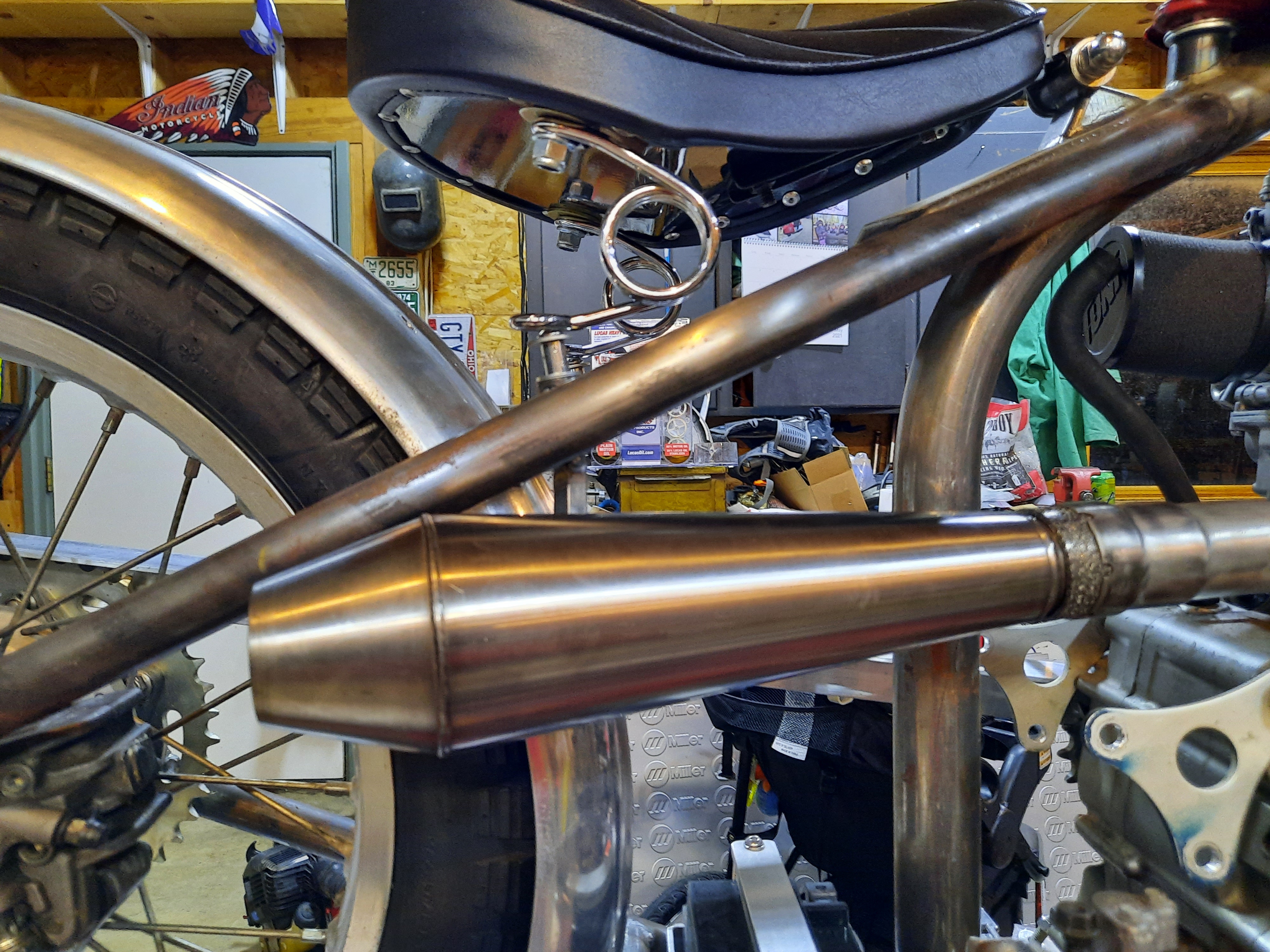 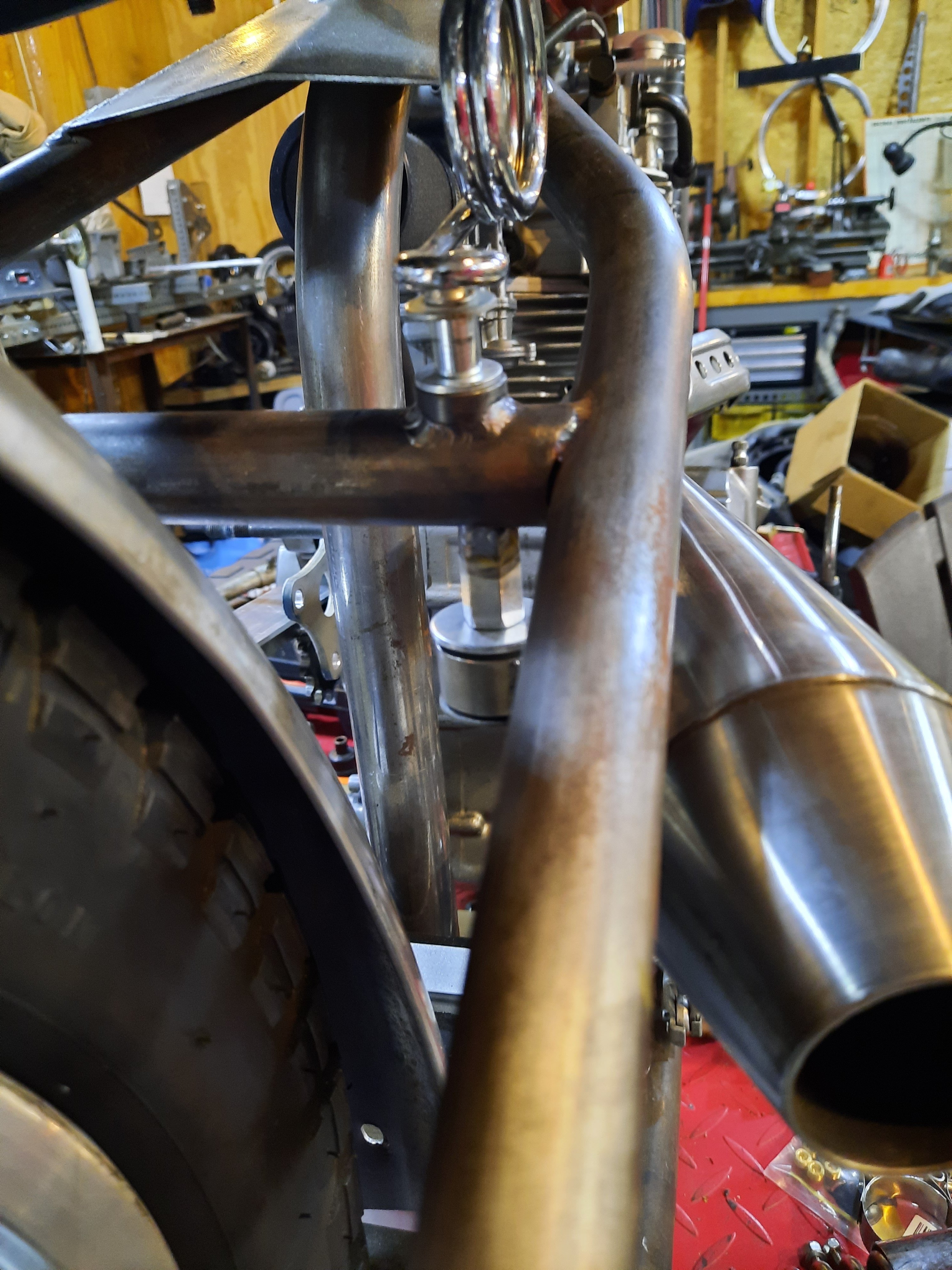