Building my own two-stroke "Mongrel" - Inspired by CharlieT & TedT

Popeye SXM said:
I'm the type of guy that builds stuff with what I have available for the most part.
Its not just the end result that's important, the journey is too

Good for you. That is why I am enjoying your build so much. I used to make a living repairing fixed farm equipment, which meant in the middle of harvest, I had to get everything working again as fast as poss with what ever I could find (never pretty )
My current project (build post coming soon) is more about the build than the finished bike. Pls keep the your pics coming
Click to expand...

Yeah, you were definitely in the business of making chicken salad out of chicken shit in that kind of an environment, lol. Definitely learn how to be creative in what you're doing, though.

Rake and wheel base #s check out, trail is a whee bit on the long side perhaps by 3/4of an inch or so. Tony Foale's book Motorcycle Chassis Design and Handling (excellent BTW, you can buy the PDF version also) says typical ground trail between 80-100mm. I'm just about 108mm or a bit shorter.

Here is what Tony's book looks like. Not a prerequesite to building a bike of course, but I've found it awfully handy to read and flip through. Many chapters of it is still over my head though ;D 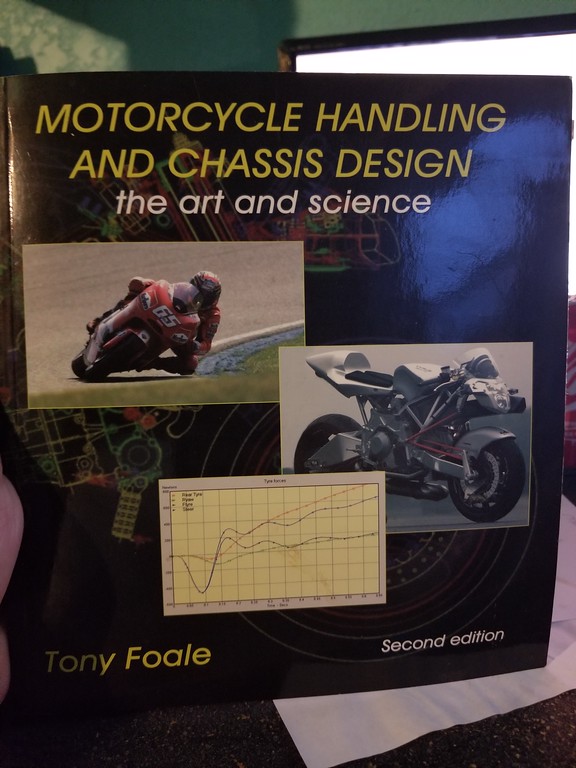 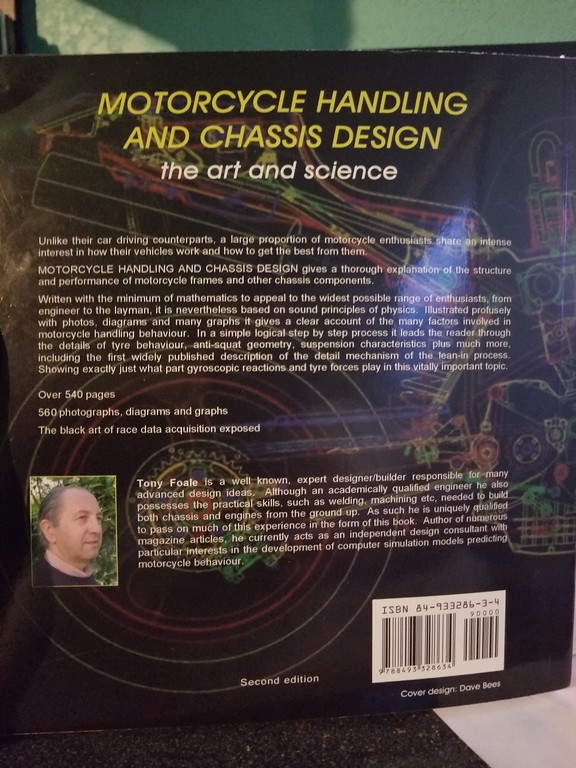 Well, bit of a set back.

Got everything together, gas in the tank, had the beast fired up in the shop even! Then it immediately started pissing water out, and I couldn't figure out from where. So, I saw this;

Basically, my best guess is that sometime during last winter, the cylinder must of froze, and split. 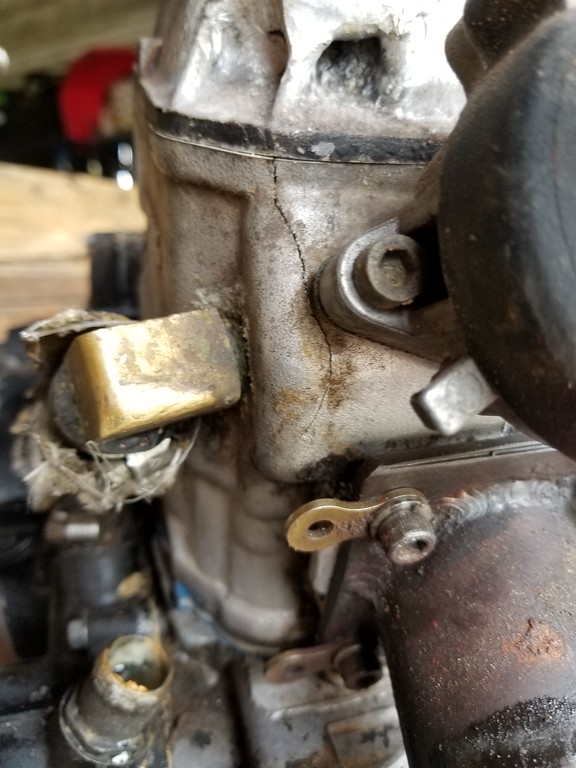 Already tore it down though. Gonna either repair the crack and re-assemble or maybe put on a spare cylinder I had. Luckily that appears to be the only damage... 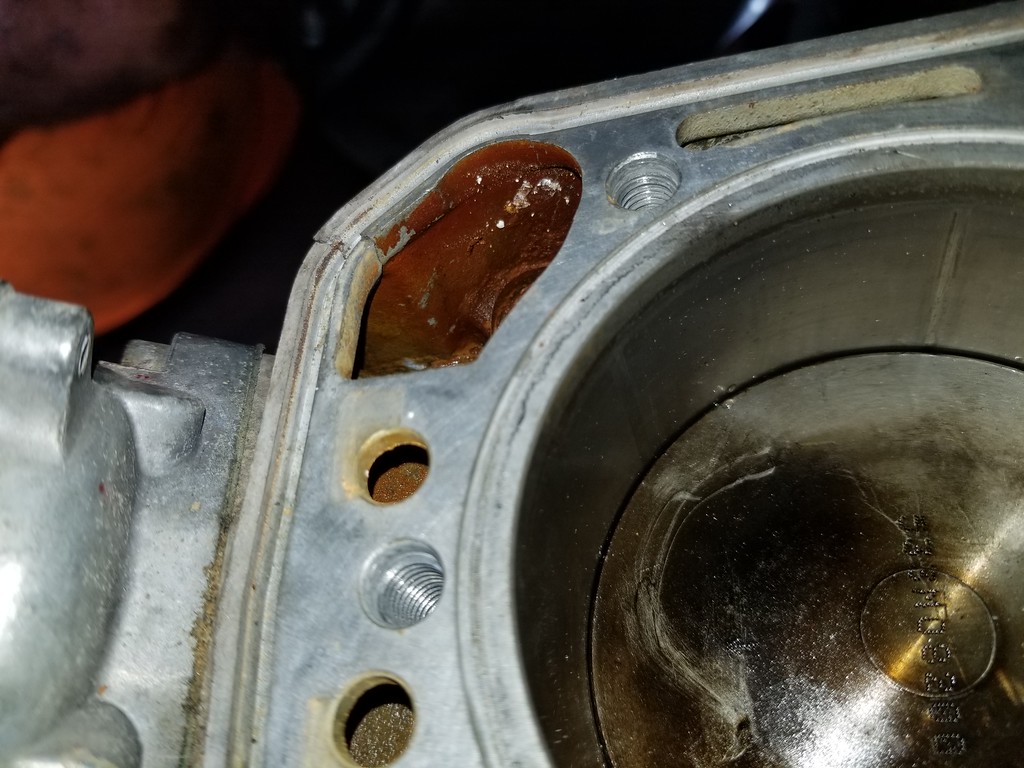 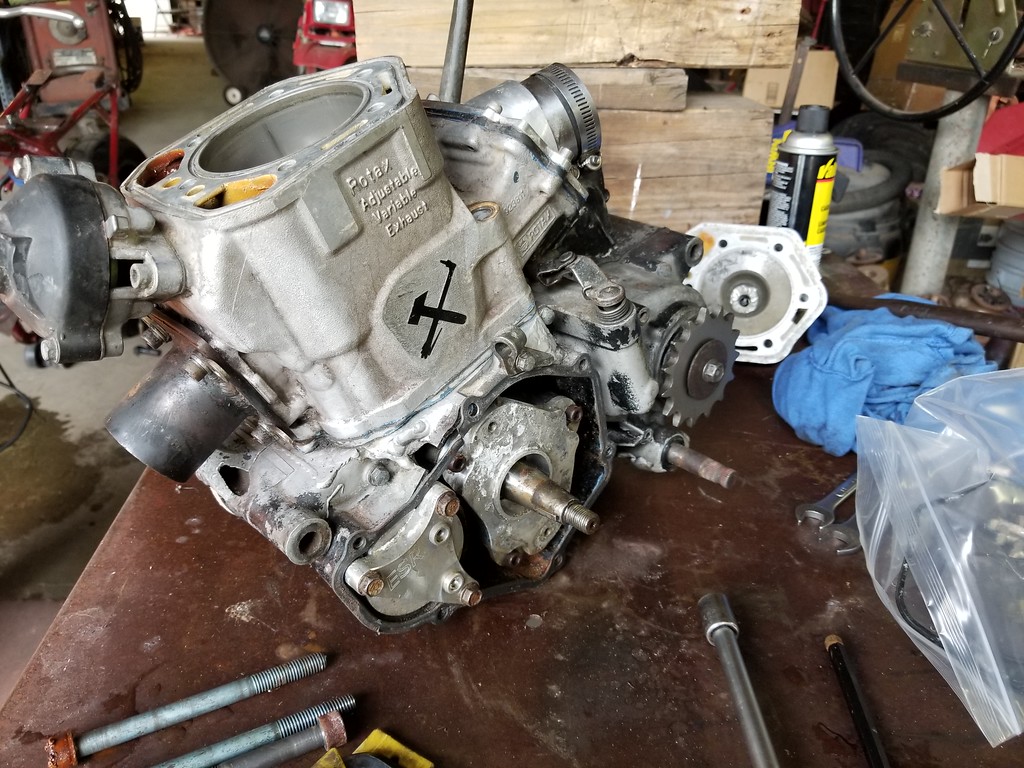 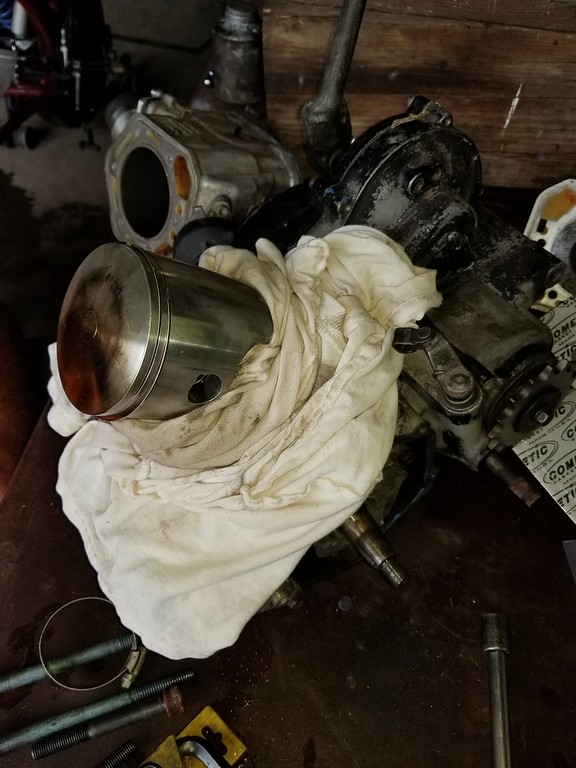 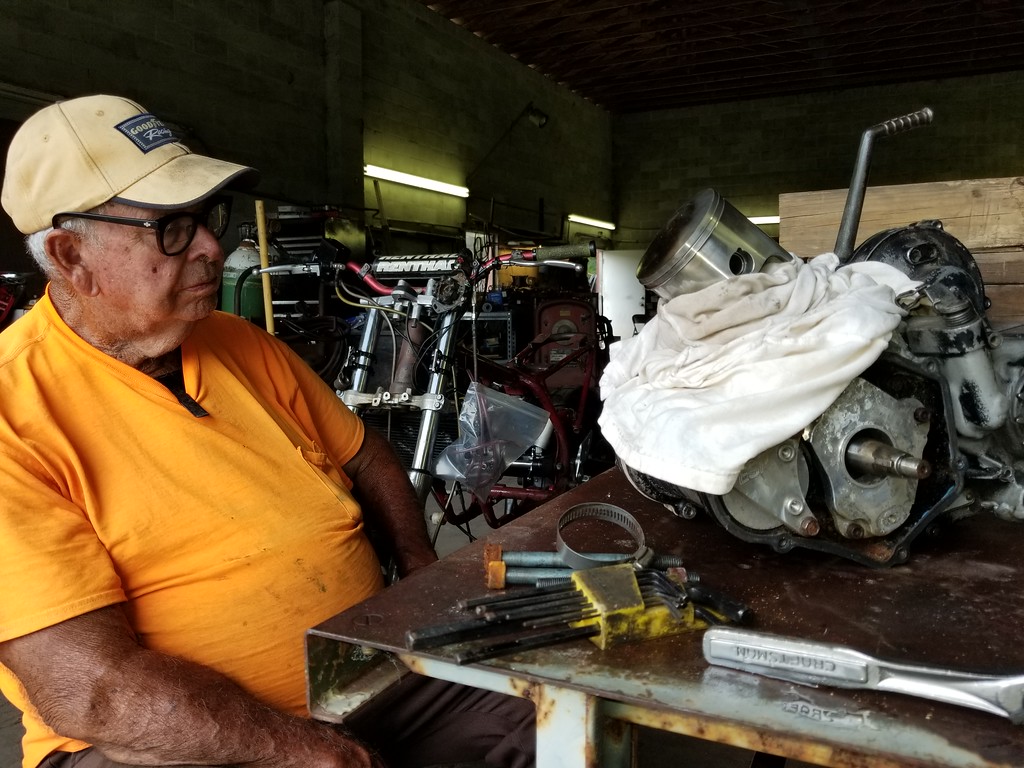 All welded, re-cut oring groove in cylinder, reassembled, back in the bike and went for a short rip around the shop and house last night about 830pm as it was getting dark....

A lot of buttoning up and tweaking of changes to do still, but hey, It ran and moved under its own power. It seems awfully low geared (not at all what I was expecting), but I do have that ginormous rear sprocket on there, so gonna have some gearing adjustments to do also I am sure.

Yey. Well done. Always good to have a runner

DTT SUPPORTER
DTT BOTM WINNER
SO AWESOME!!!! that's a great milestone when it moves on its own.

lol..I'll get some more pics and maybe a short run vid if I can get it to idle and put it back on the rear wheel stand.

I rode it a little bit more, long enough for it to warm up, burnt my leg (that's a never ending prospect on that pipe). Noticed my front fork seals are leaking, leaking transmission oil out around the counter shaft and sprocket, Gotta adjust and bleed the brakes better, about couldn't get myself stopped, haha...Need to shorten the shifter throw a bit.

Needs a lot of tweaking and finishing, but it was fun to eliminate a pretty long strip of grass between the house and the shop going through a few of the gears, haha. Its about as unfinished as it could be in present form and still ridable, but hey I know it is a reality now first hand and I can continue to work on it form here

Saw this on the faceybook and thought of you billygoat. 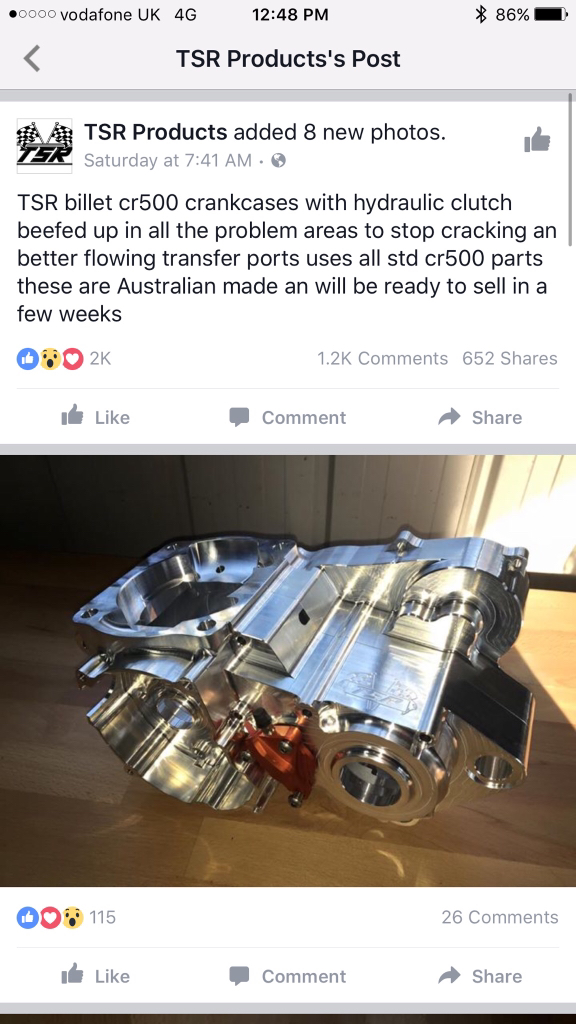 I just recently saw those! Another company here in the states are making a similar setup, also.

It's kind of a funny, I have a friend in Australia that made a crazy aircooled 250r engine several years ago where he welded and machined it to move the cylinder from vertical position to horizontal, so it would better fit in a mini-trike chassis. It originally housed a 70cc 4 stroke and then wound up with an aircooled 300cc 2 stroke single in it...lol. That build of Mart's influenced me quite a little in the feasibility of me attempting mine, originally. Some asshole wound up stealing his bike not more than a year or two after he built it and he it has never been seen since. A couple years ago though he started a new crazy build of taking a TRX450R (based on CRF450) engine cases and since they have divorced oil supplies for the transmission and the engine, he basically grafted in portions of CR500 cases like the crank case and welded up the top of it basically convert a 450 4 stroke engine, into a 500cc 2 stroke with modern transmission, cluctch, counter balancer, forward kickstarter, the works. If you got some time to burn this weekend, check out his Youtube video on the project. Definitely inspiring for all wannabe mad scientists of motorsports; https://www.youtube.com/watch?v=p-LnYFI0t2Y&feature=share

With all the vibration dampened out and a modern clutch/box that engine will be awesome if he can keep it reliable.

I would love to have that motor in my crf!!! ;D I am a smoker at heart. Back in the day I had trouble controlling a cr250, never tried the 500

Some misc pics and of the repair since I never got to post them; 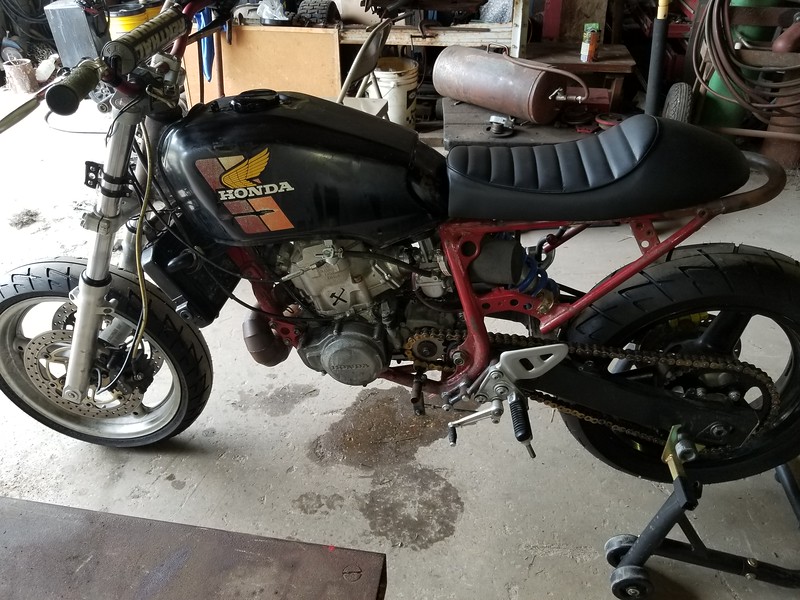 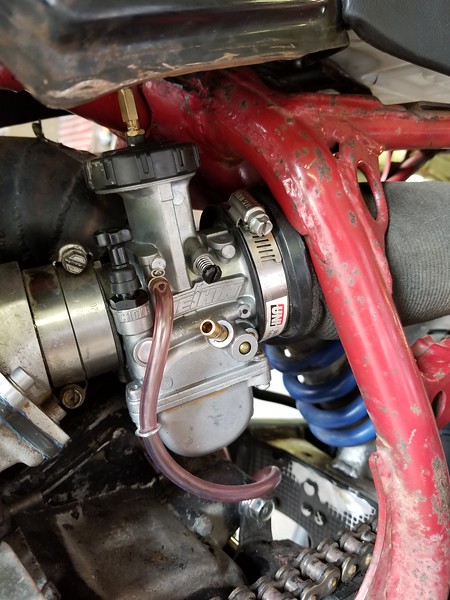 (Shows a little bit of how tight everything is on this build...check out the pipe in the background behind the Carb 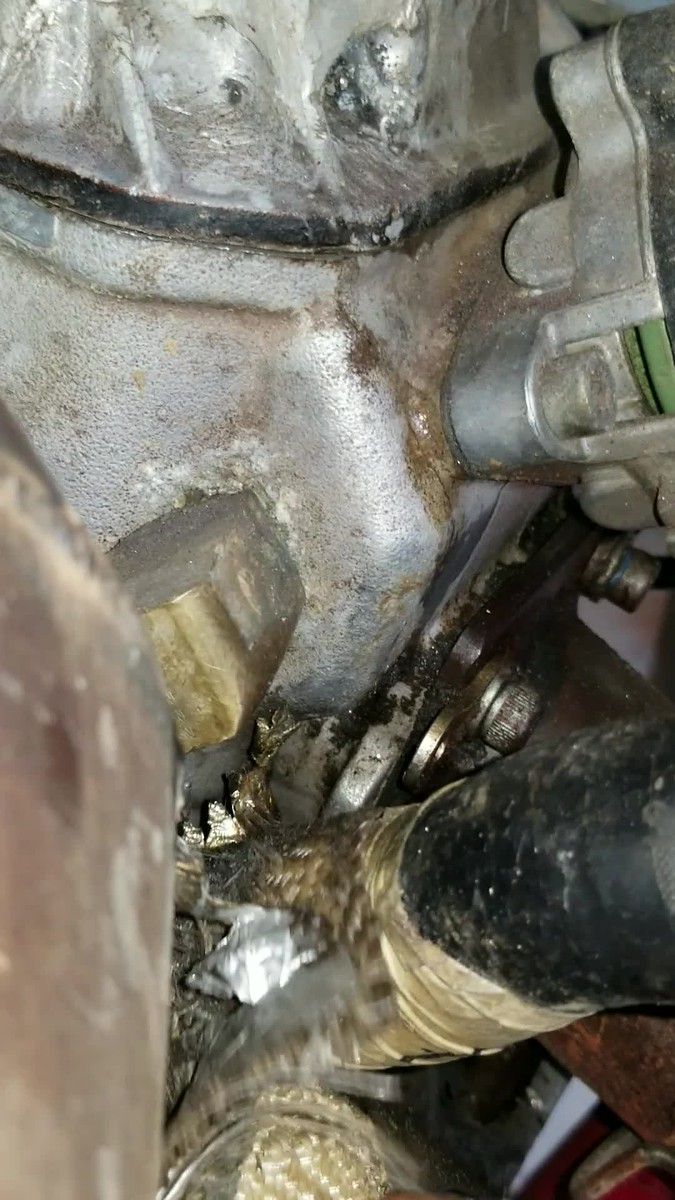 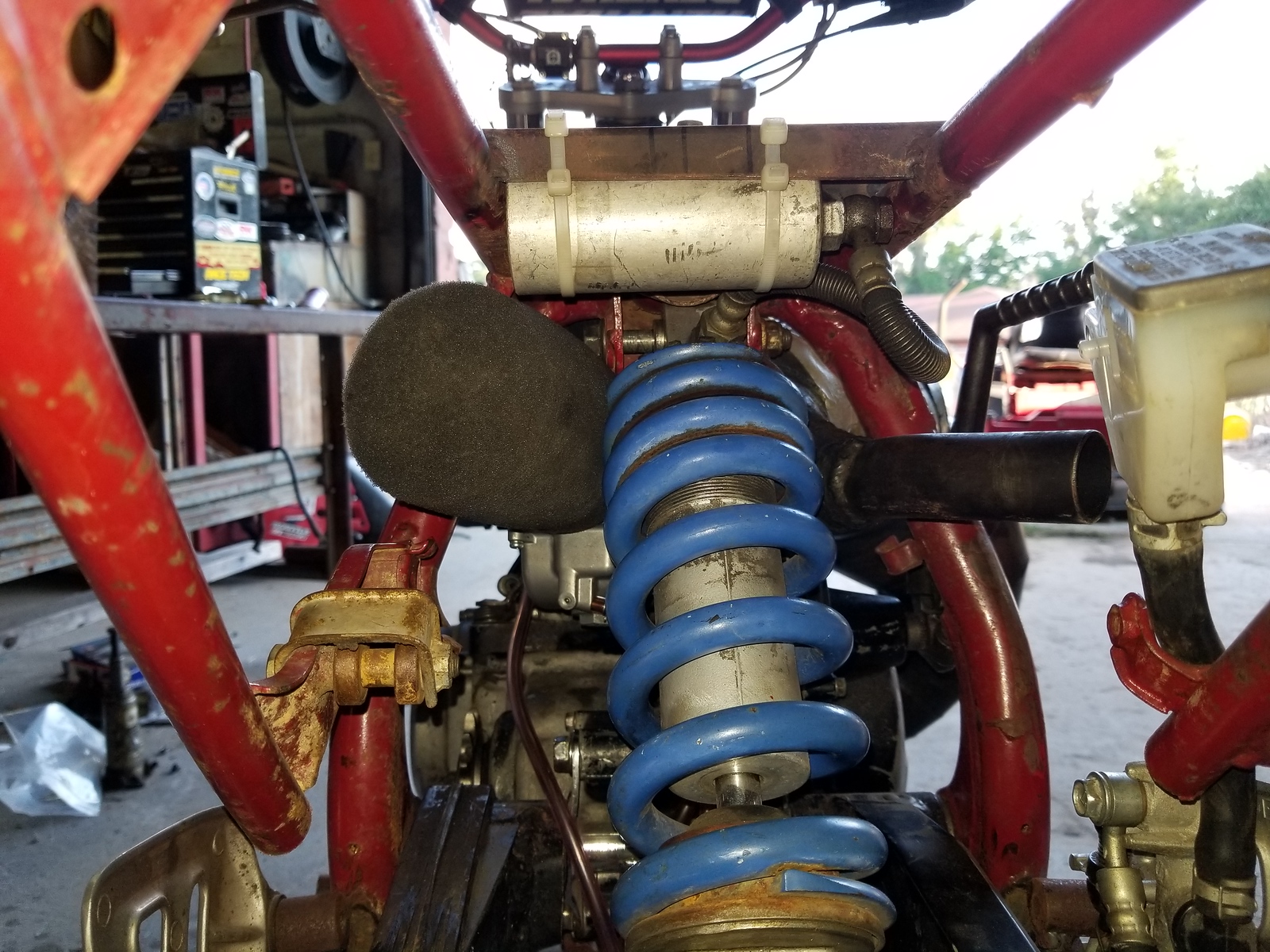 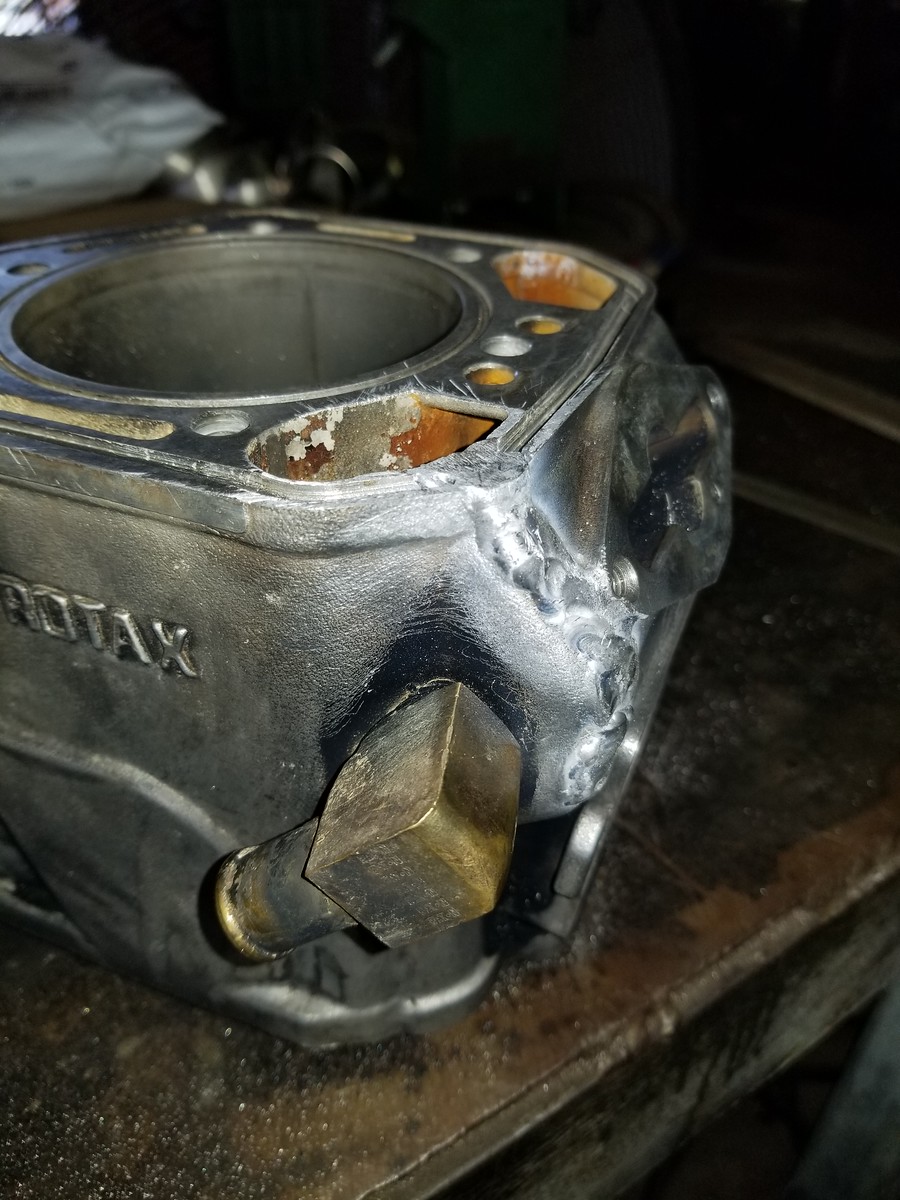 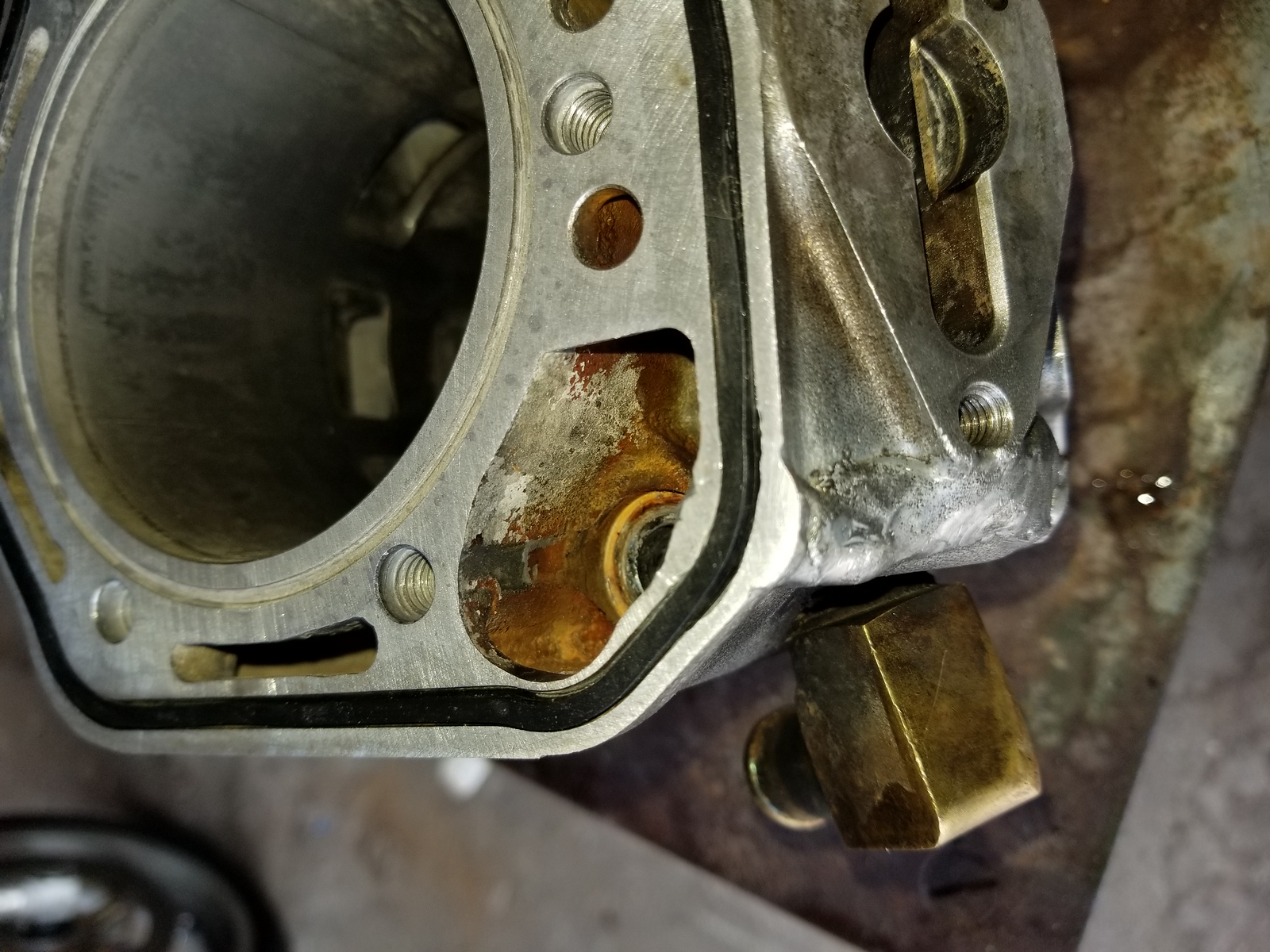 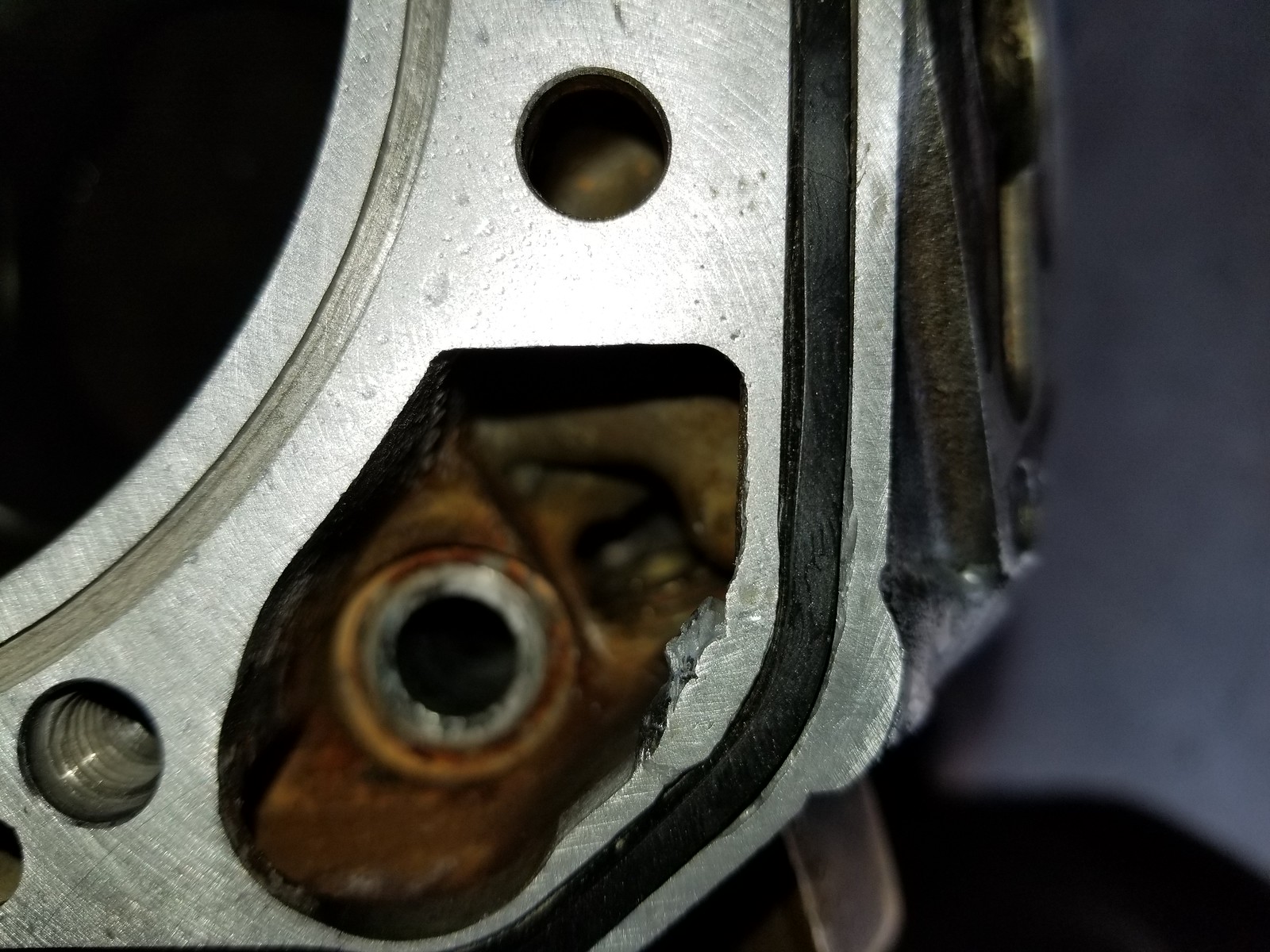 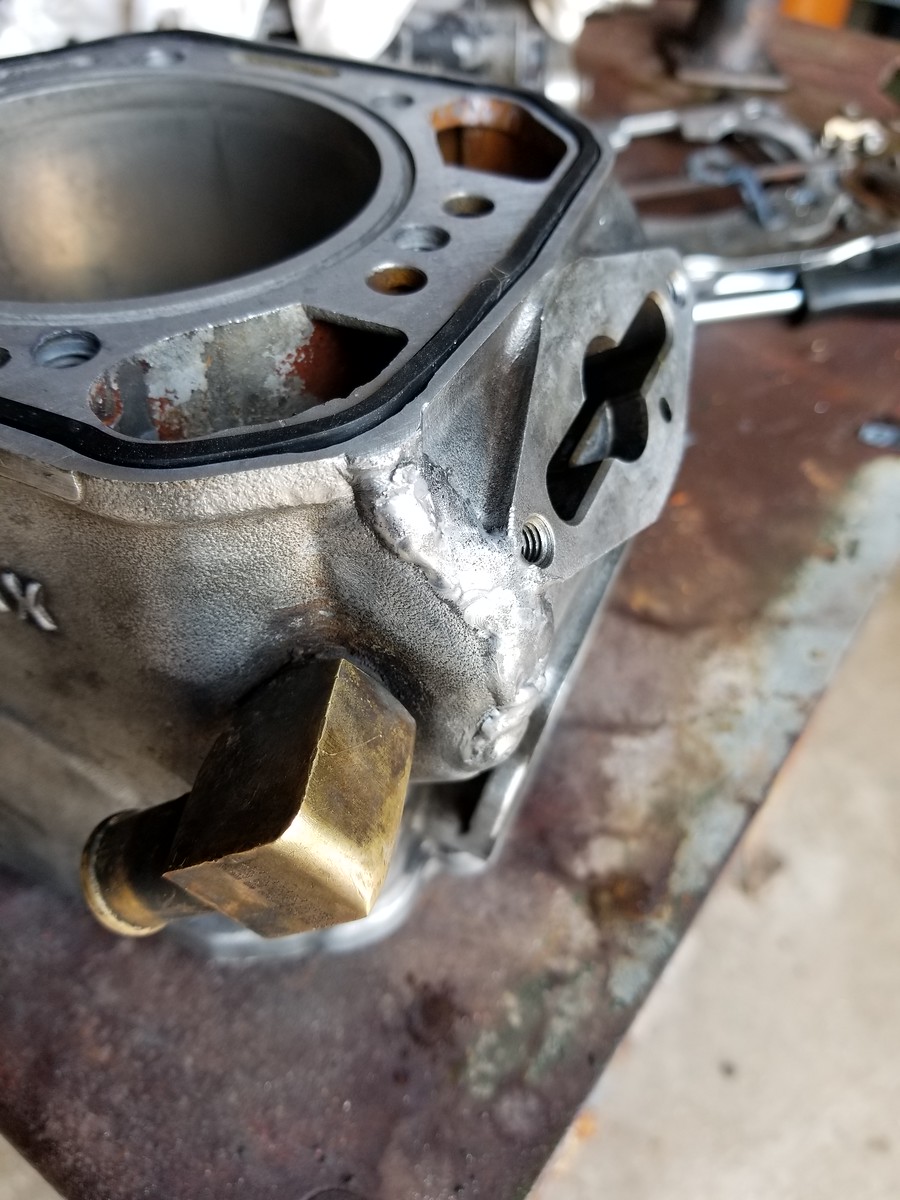 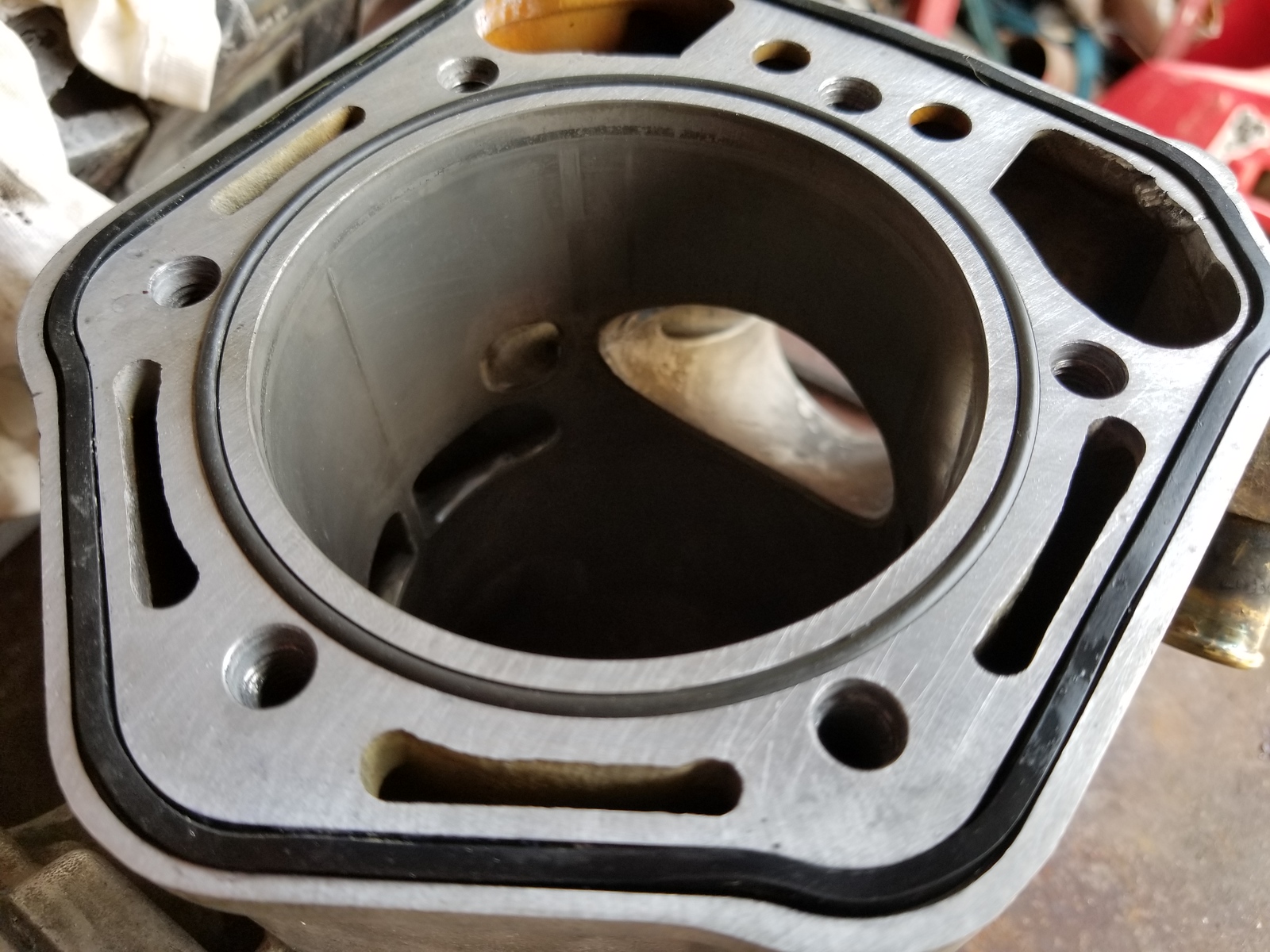 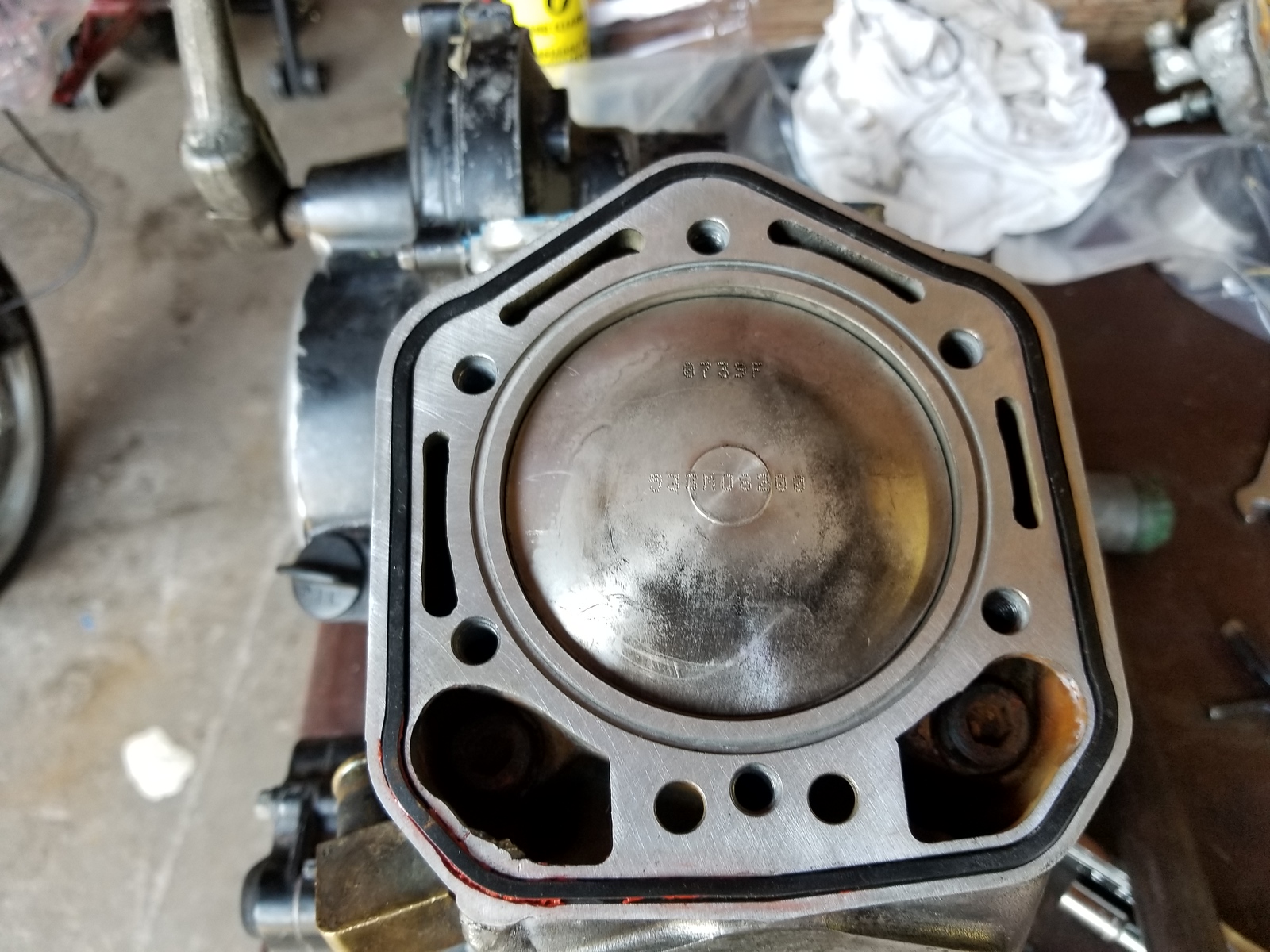 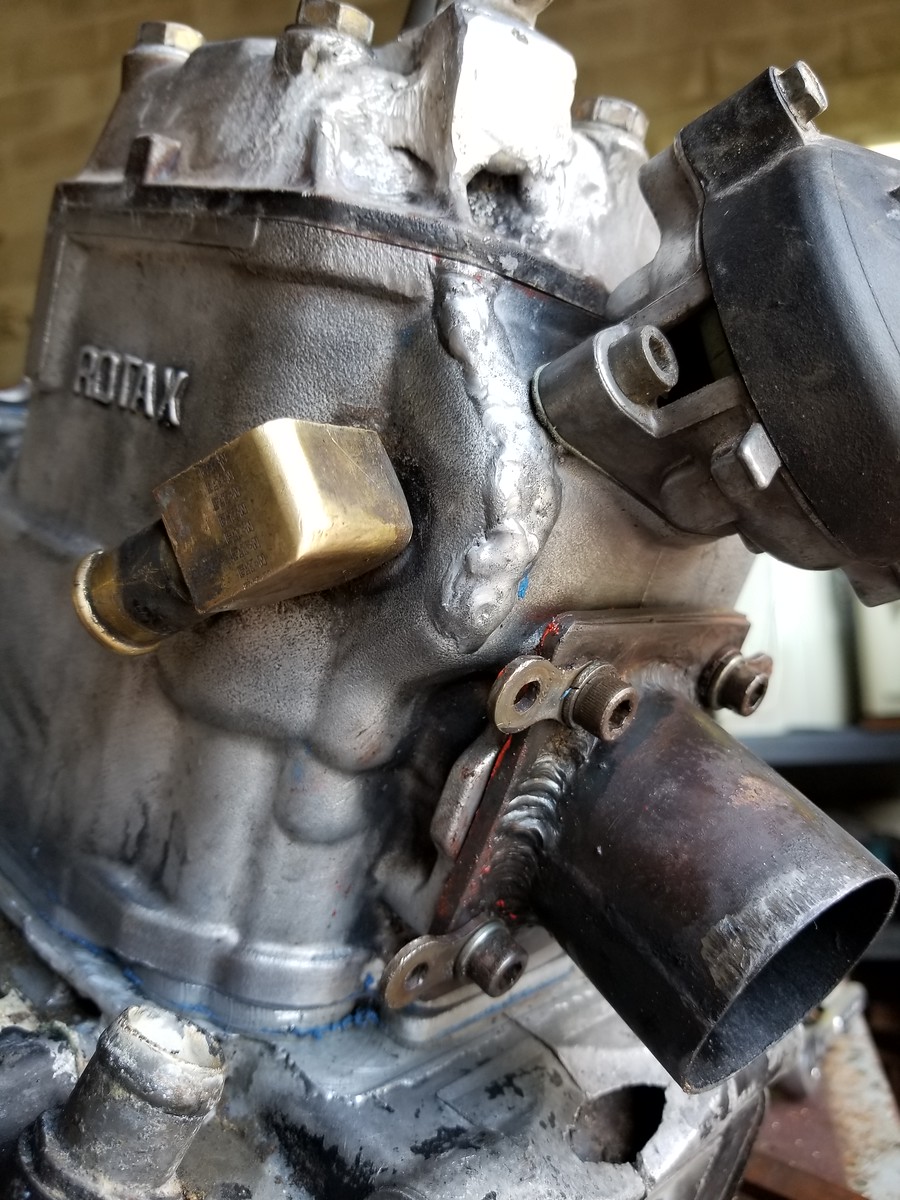 Hows everyone shakin'? Haven't done much on this beast in the last few months - but hope to pick it up again soon. Gotta rework some of the controls and start working on wiring. Believe I'm gonna go back to the original ATC250R electrical system instead of the CR250 for a bit heavier flywheel, and lighting coil that the CR system does not have.

Glad to see you back

Me too!....this project is awseome.

So I've gotten to ride the thing around the yard a combined time of about half an hour now. I finally got caught up on some other things and ordered a few things (bars, new grips, new front master since the Hayabusa one I bought on ebay wouldn't pump.., clutch perch) and got it all on. Got the front brakes bled finally and then the calipers were dragging, so pushed the pistons out and cleaned some road grime and debris off of them on the wire wheel and got them put back in, rolls nice and free now. Found an oil leak on a seal-collar around the main output shaft (front sprocket) which is discontinued but found a guy reproducing them, so got one of those on the way. Had a piece of trash in the needle seat and kept causing the carb to over flow, got that addressed.

First time I rode it again after getting the bars put on it felt kinda lean once it got warmed up so went from a 160 main jet to a 168 to err on the side of caution in the 39mm Kehein PWK. Still is *super* crisp once it gets warmed up...gonna be a death wish on the asphalt when you start trying to bang through the gears I can tell already haha. I forgot how good this engine pulls when its dialed in.

Still got a lot of hokey shit on it (routing of cables, wires, hoses, etc. is all duly noted) I need to clean up. Some finish welding on the rear grab bar. I located an old round seal-beam type front head light off of a caterpillar dozer of some forgotten era up in my dads barn I'm gonna clean up put on the front. Have a lot of wiring/electrical work to do moving forward and have to get a CR250 stator (system I'm running) that has a lighting coil as it is from the OEM an ignition only system. Those run about $250 so thats down the road a little.

Mechanically, I think I'm getting it about 90% there. Still have to make some brackets and mounts for little things like the rear brake resivour, figure out an exhaust silencer and add another mount for it until I can build the new and improved under-slung one that will come in the next few months. Also still gotta figure out a kick-stand arrangement, and think I will put one of those cable pull seat latch deals on it, also. Been trying to score a cheap SV650 front fender also but no luck yet.

Admittedly not ridden it very fast, but when I have cracked the throttle and opened it up in 3rd and 4th, it's been a lot of fun. I do think it is going to be a bit front end light once its on the road - I may want to go back to that taller rear shock to pitch the front down faster than I had anticipated. The "super bike" style bars made all the difference in the world in teh feel of it. Still seems a little bit wide, but might be some of my other ergonomics also.

I took some new beauty shots for every one out in the yard with the new stuff on it after riding it around some this afternoon that are uploading now, I'll come back and share in a bit.

BillyGoat4130 said:
gonna be a death wish on the asphalt when you start trying to bang through the gears …
Click to expand...


BillyGoat4130 said:
… I took some new beauty shots for every one
Click to expand...