Well, they didn't let her out until the 8th. She has some sort of lung condition so has to be on oxygen for next few weeks (maybe months?)
Apart from that, I'm running around like crazy getting stuff for her and trying to teach her how to use all the equipment. Had to get an O2 monitor and a new BP monitor but everything else looks OK
I hope insurance is paying for O2 generator ($700 a month otherwise)

Betty must be doing well, just 'hid' in the garage and made a few sets of CB360 vacuum adapters. (complaining obviously means she's getting better) Because it took? years to sell the last 25 sets I made I've only made 4 sets this time and one is already spoken for

Was asked to make a couple of spacers to mount footrest hanger on swing arm pivot bolt. As usual, couldn't leave well alone so instead of basic parallel 'lump', did some math and machined some angles so they have a taper.
Took a guess at large size, small diameter is 30mm, centre hole 15mm. Haven't used small rotary table for a few years, spent some time looking for the various fasteners and fittings for it. Yes, the one on the right holes are not consistent 60 degree spacing, I didn't tighten it down properly (and forgot to check before starting drilling)
Not really important as holes can't be seen when hanger is one side and swing arm pivot on the other. Should look better than having a 2~3mm step though? Original picture I was sent 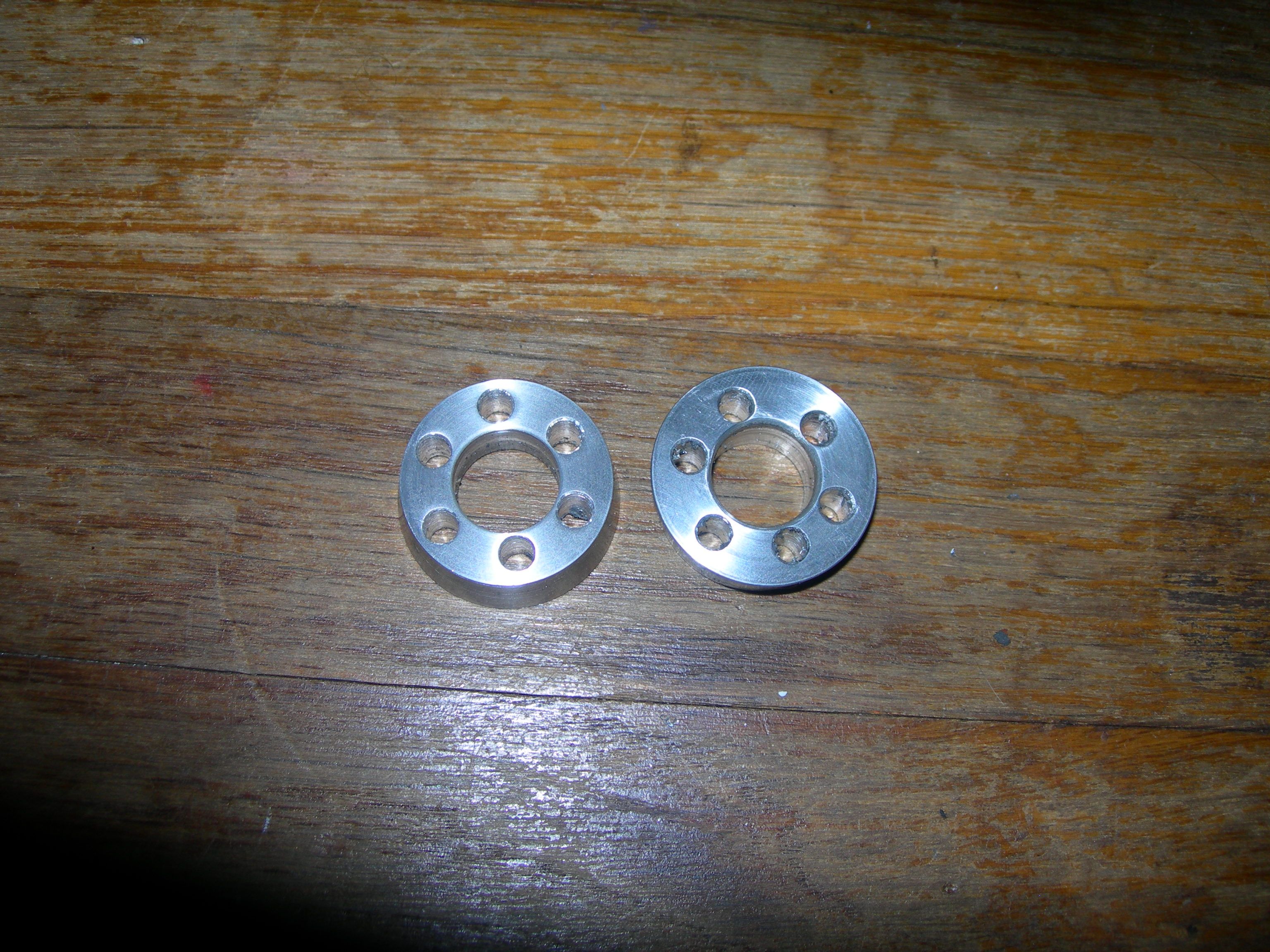 First log in for a while.
Been feeling totally exhausted and didn't know why exactly (thought it was grandson wearing me out)
Anyway, wife has been sick and in hospital (had hysterectomy plus other issues, now has to carry oxygen bottle around plus a oxygen generator to sleep with)
I checked blood pressure using her equipment, was really high (192/112) but not too concerned until I looked it up online where several different sites said call 911 (or you can blow a gasket)
Side effects of high BP are exhaustion, blurry vision, headaches, etc.
I'm off to docs to see if I can get some meds for it.
I 'look' OK and have always had BP in the 80~90 / 120~130 range so even doctors don't always do all the tests ther should.
Getting old sucks but beats the alternative ?

Don't play around with your blood pressure!

Get some meds and feel better man.

Saw doc last Friday, he had prescribed meds last August but for some reason pharmacy never got script?
Anyway, got some meds now and feeling quite a lot better so may actually get something done for a change

Found out something new about CB360 carbs.
The pilot (slow) jet is a weird size.
Even though I've worked on these carbs for more than 40 yeas in total, I never needed to know the thread size and assumed it was metric.
Well, it isn't!
Did some measuring, looked like 1/8" Whitworth.
Did more measuring, it's 0.136" diameter? (1/8" is 0.125")
Original Kei-Hin are a taper thread !!!
Closest size I can find is #6x40 UNF (0.138" OD)
Why do I need to know after all this time?
Well, doing the worst set of eBay carbs I've ever seen.
Nice and clean on outside but internally a total disaster, every problem I've ever had with carbs is in this set so a major challenge.
Don't know what was used to clean them but it's made carb bodies a bit 'gummy' where whatever didn't get properly washed off (all the internal passages)
It's ALWAYS the left carb that gives problems!
Right pilot jet cam out after a bit of a struggle.
Left pilot jet, - nope. release oil, ATF&thinners, heat, no luck.
Eventually got it out but threads were with jet (actually looked more like grey mud)
So, it needs an insert (can't Helicoil as jet needs a flat surface to seal and Helicoil is 'open thread')
Made a brass insert, 5x.80mm OD, 9mm long.
There are air bleeds above and below jet so it has a very specific location not to block passageways.
I'll get some pics posted when I find camera battery. (I don't use phone camera)

That is interesting PJ!

i’m doing a big service on my Ducati Superlight at the moment, as Scruffy is finished and running great!, and decided to remove the aeroquip hoses and oil Cooler to give it a big clean.

Some pictures.
First one shows eroded bits and stuck pilot jet. Threaded part for pilot jet plug crumbled away when plug was removed (middle hole on left side)
Float posts for pivot pin also pretty bad, oversize when cleaned up so have to make new oversize pivot pins, 2.7mm diameter.
Pic 3, making new pivot pin from 1/8" brazing rod. I'm going to put a flange on one end, pretty sure there is enough clearance inside float bowl.Finally, the insert and pilot jet. 5mm outside thread, #6x40tpi internal thread.

Carbs sent back but no feedback on results.
Found something interesting today though, Arduino based ECU, open source.

speeduino.com
Was toying with the idea quite a few years ago but didn't really get anywhere.
Youtuber converting 1970's bikes to fuel injection , etc.
Neodymium magnets degauss around 200c, did not know that.

Was a bit bored yesterday so made a new axle nut for 360.
Original steel only weighs about two ounces but I had a 'new toy' to play with (collet blocks) so made one from 6061 aluminium.
It's less than three quarters of an ounce so I'm going to use it on the 'lightweight' 378.
Dumb? I don't care, steel axles screwed into aluminium fork legs is very very common so whats the difference in an alloy nut? (plus, I already checked it to 40 ft/lbs
It does need a 6 point deep socket though or it is liable to round off the edges if you use a normal 12 point.
I don't think I will be making any 'for sale' though (even for 'Race Use Only') as they would need to be at least $25.00 (plus shipping) although I may get some 7075 which is substantially stronger and harder than 6061 (and more expensive)
I may make a rear axle nut but I don't think it could handle 80ft/lbs or more? (may just do it for fun anyway and see at what torque it strips out)