Awesome work Pete! I assume you made the mount for those dampers? My son and I are nearly done with the engine rebuild in our 450. It won’t be anywhere close to this level, but I’m getting some ideas!

Thanks Ethan. I've been following your post and yours is coming along well. Great to see your son helping as well.

I bought a new left hand switch assembly as it was a narrow one and gave me the right amount of clearance around the clutch lever. I had previously bought another narrower one but it had really small wires and would have required relays to function correctly, so I bit the bullet and went with this one. It was fairly expensive, but had everything I wanted and was from a dealer I had used previously who was great to deal with. When it arrived it was exactly what I wanted, however the back part of the assembly was for 1" bars, with the front part (with all the switches) was for 7/8" bars. I fitted it up and it wouldn't tighten up on the bars, so I messaged the dealer and he was very apologetic and offered me an immediate refund, including him paying for the freight both ways. I thanked him for this but as the switch was perfect for my application I decide to make up a new back piece. The third picture shows the original one at the bottom and the replacement at the top, and it all tightens up perfectly.

Here's the new switch in place, nice and tight on the handlebars now.

I can only dream of having the machines and skillz to 'knock up' a piece like that, very nice.

I have spotted a KTM leftside switch that looks neat n tidy which can have an optional indicator module which should do nicely.

I can only dream of having the machines and skillz to 'knock up' a piece like that, very nice.

I have spotted a KTM leftside switch that looks neat n tidy which can have an optional indicator module which should do nicely.
Click to expand...

Thanks NoRiders. I looked at the KTM switches but they all seemed to be too wide as well.

Haha, not that hard, your dad could have made one a lot quicker than I did, that's for sure.

DTT BOTM WINNER
Will you please stop now. You are making the rest of us look bad. ;-)

teazer said:
Will you please stop now. You are making the rest of us look bad. ;-)
Click to expand...

teazer said:
Will you please stop now. You are making the rest of us look bad. ;-)
Click to expand...

Aw c'mon guys, I've been on this project for over two years now, the only one that looks bad is me lol

I made up the main earth and power wires and was able to crank the motor over a few times on the starter motor. It spins nice and freely, but I had the cam covers off and no oil was pumping up to the top end. I cranked it for maybe 15-20 seconds and have seen no sign of oil, perhaps it just takes longer to get up there when the motor isn't running. I'm not really a four stroke person, aside from a Harley, Ducati and Rotax all my bikes have been 2 strokes, so I'm hoping that I am just rushing it a bit and it will get there soon. No problem if not though, just need to remove the clutch cover and find out what is happening in there...

DTT BOTM WINNER
20 seconds is a long time to not see oil.

You think so, OK, I'll pull the clutch cover and have a look.

DTT BOTM WINNER
You could see if it's possible to use a hand pump to fill from above. That might prime the pump.

Thats a good idea Teazer, thanks. I know that it was sitting around for a very long time (20-30 years) so there's a good chance it has nothing at all inside the pump.

I finally made it back from overseas a few weeks ago, but had to build a deck on the house and build a car hoist in my shed, but now I'm back on the bike. I now have oil going to the top end and have started modifying the wiring harness for all my new fittings, which now just needs to be taped up and fitted. I gave the seat and tank a final coat of red which just needs to be rubbed back and then stripped when it's all dry, so it's getting closer now. 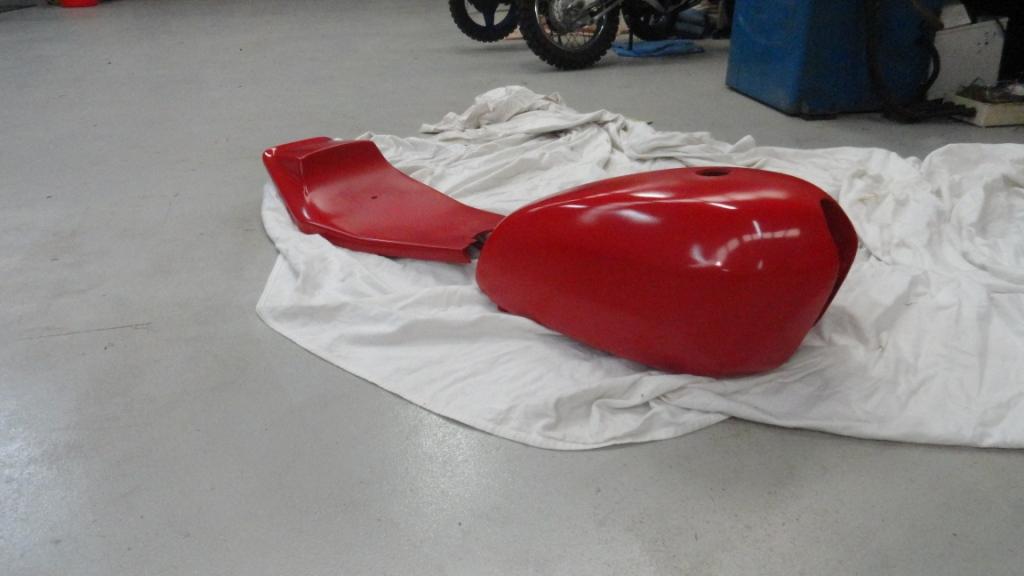 Got the tank and seat striped up over the weekend. I went with HRC colours so I mixed up the paint to match and then masked it and sprayed it on. Next I need to add the stickers - HRC both sides, Honda on the top and a set of chequered flags on the top of the seat. I think it will look OK, but we'll have to wait and see. EDIT - pictures added 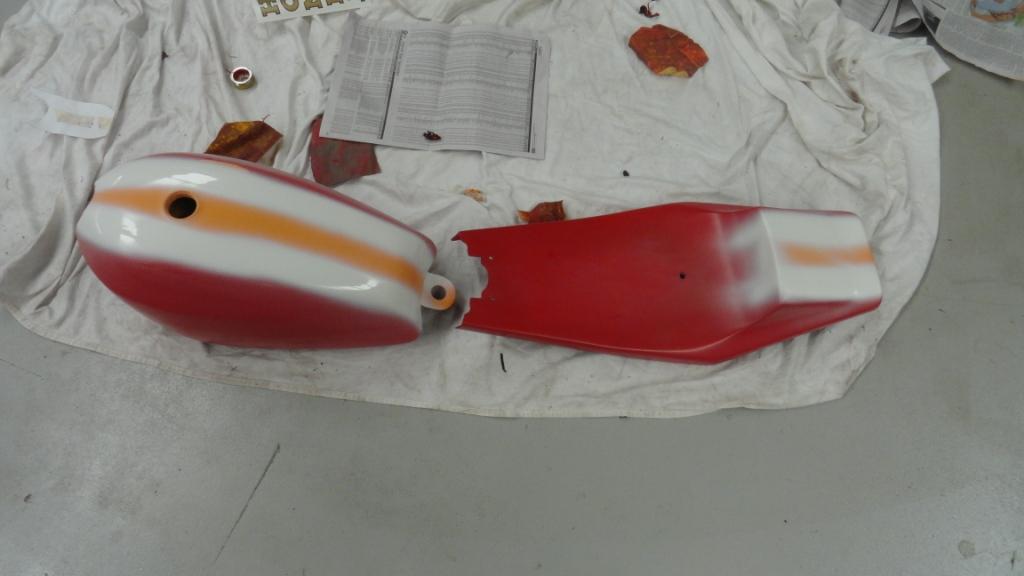 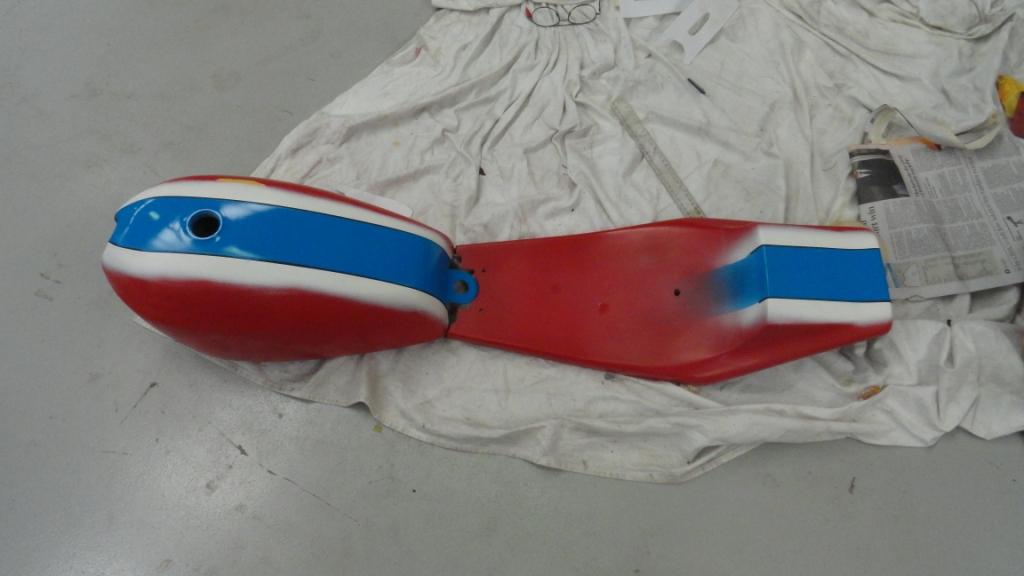 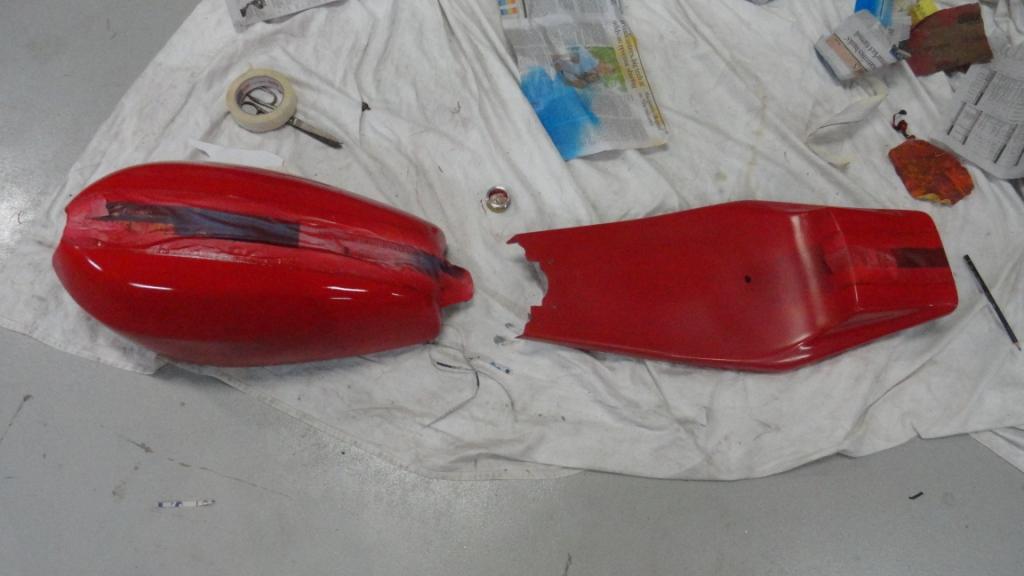 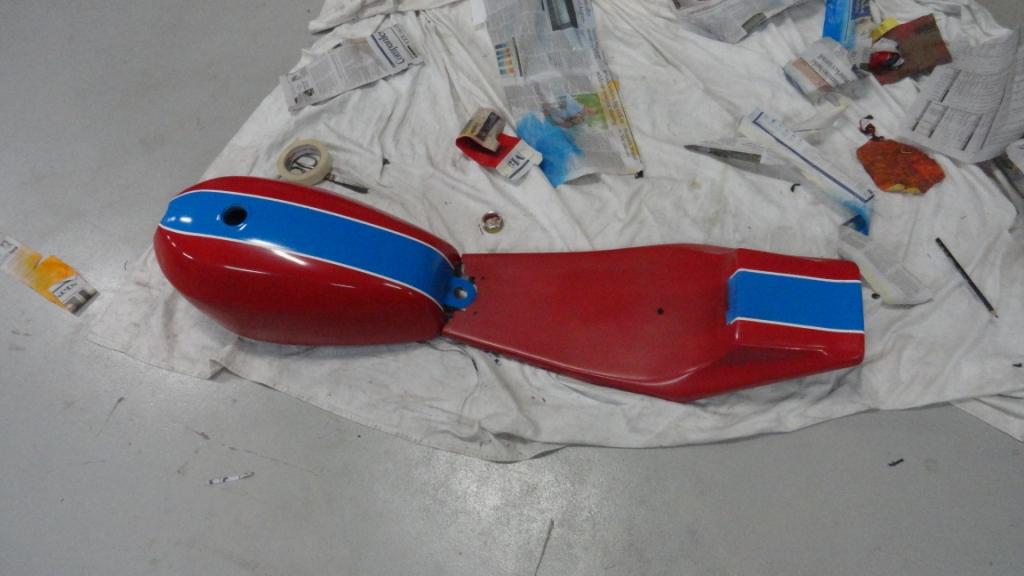 Finally home from a horrible Christmas break at Lake Conjola and have made up the stickers for the tank and seat. I now just need to clear both of them, finish the wiring and make up a mounting plate for the rear taillight/number plate combination and we're in business. I hope the guys at the Racing Corporation don't get pissed at me... 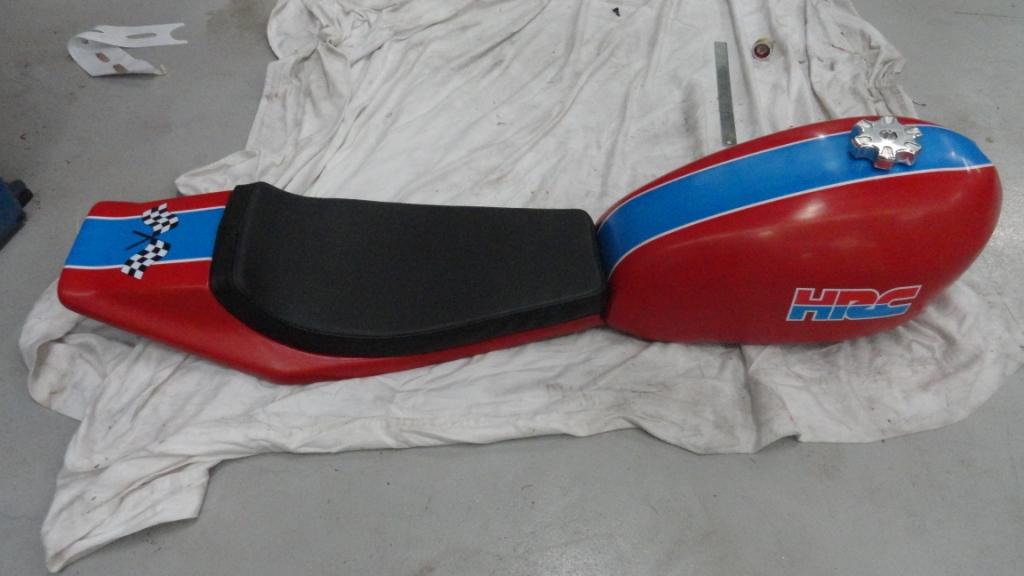