Rider52 said:
I have used the inner front fender support as a fork brace. After removing the fender it can be made to look pretty decent.
Click to expand...

MY stock front fender is perfect so rather than cut it up, I bought a dinged up fender which I will cut down which will incorporate your suggestion.
C

The motor is unofficially complete. I have 1 thread that is stripped on the case which I'm waiting on the helicoil I ordered. That should be here in another day or 2 and than this motor is officially done, gets wrapped in plastic and stuck in the back of the garage. I put the carburetors on, mostly for the satisfaction of seeing how they look and to get them put away. Besides the performance increase, they look wicked cool. They will have to come off when I put the motor in the frame. Now I can start doing a few things to the frame. I also got all of the parts in to build a modern set of forks that still look stock. 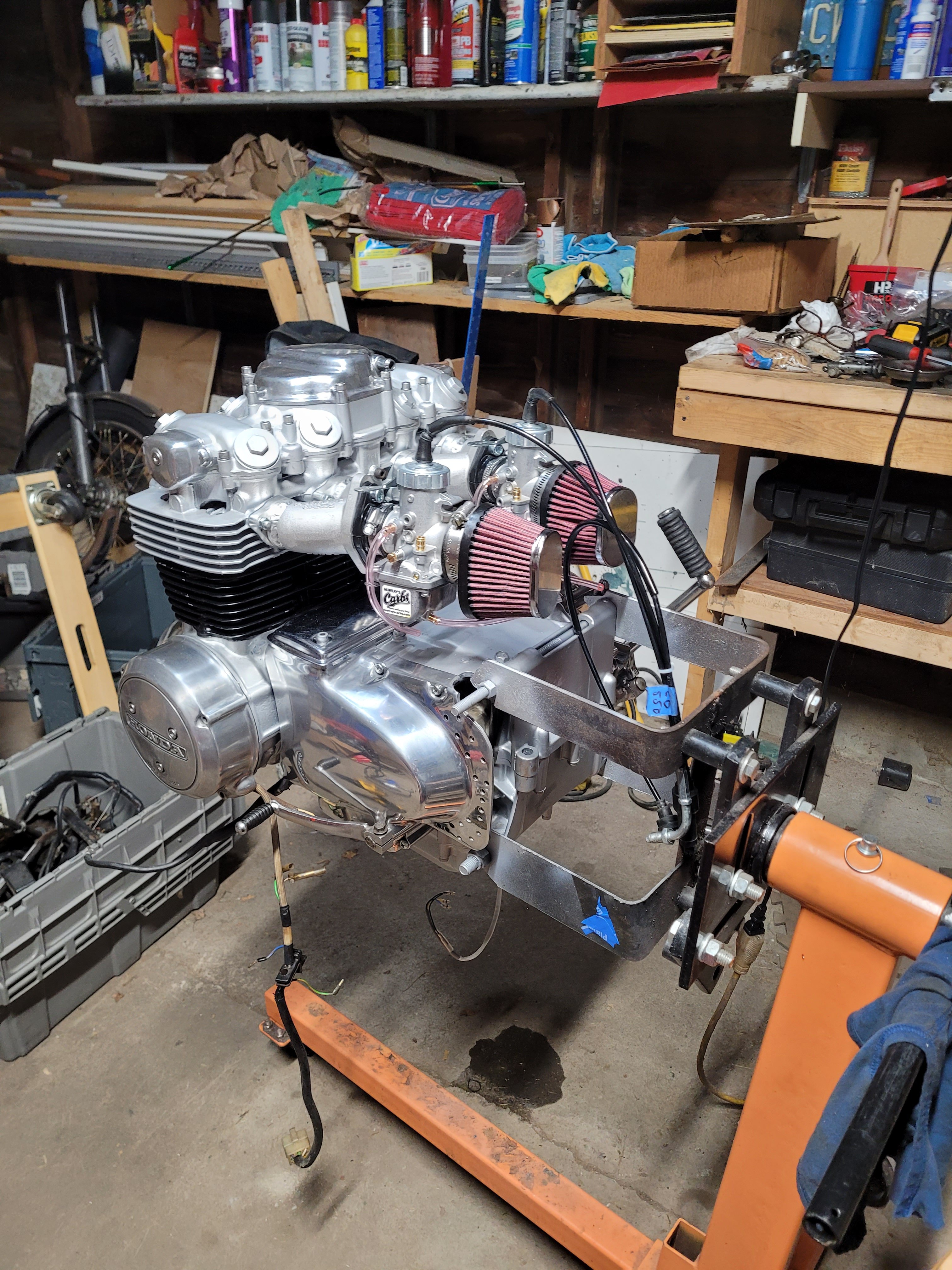 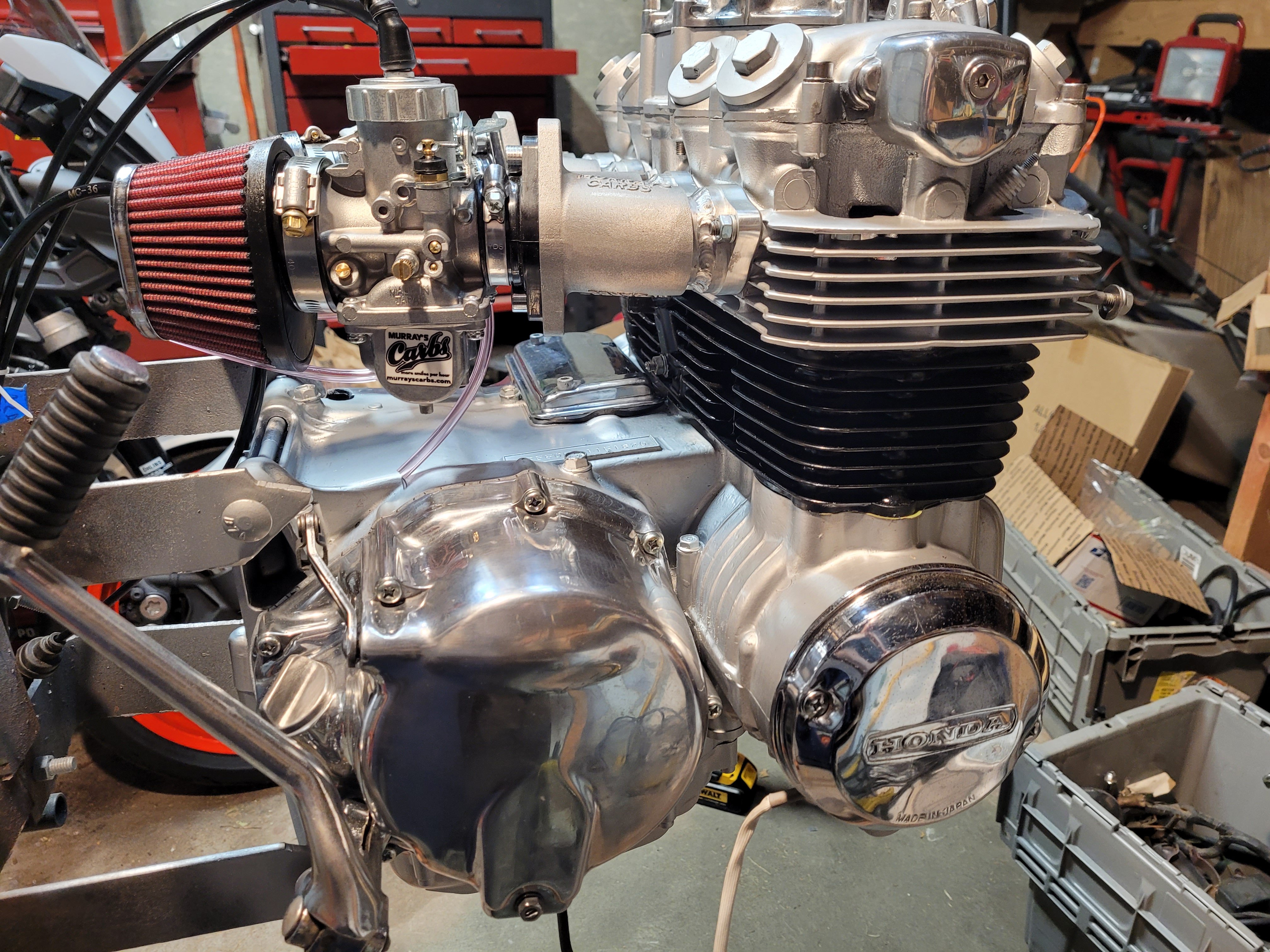 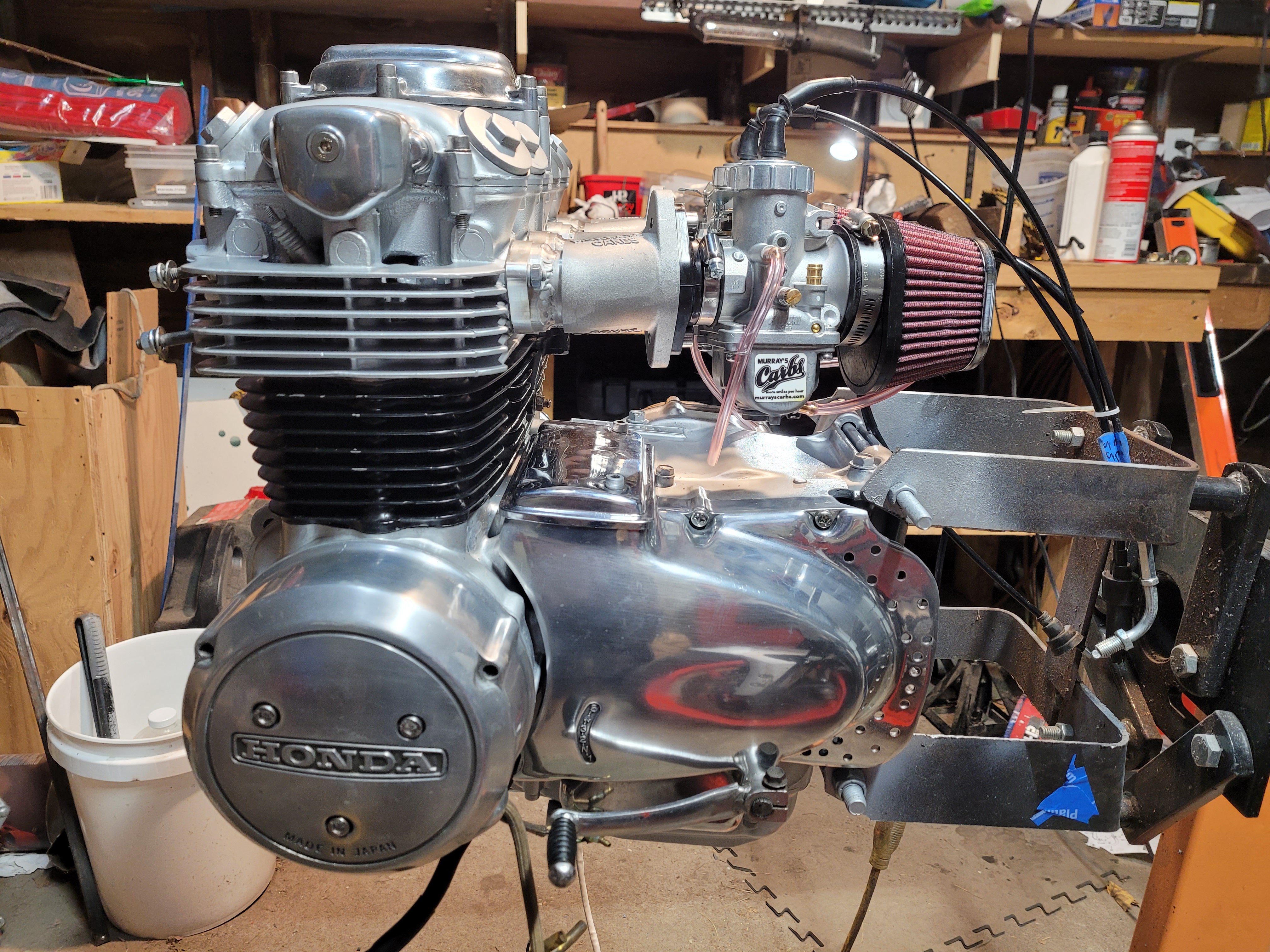 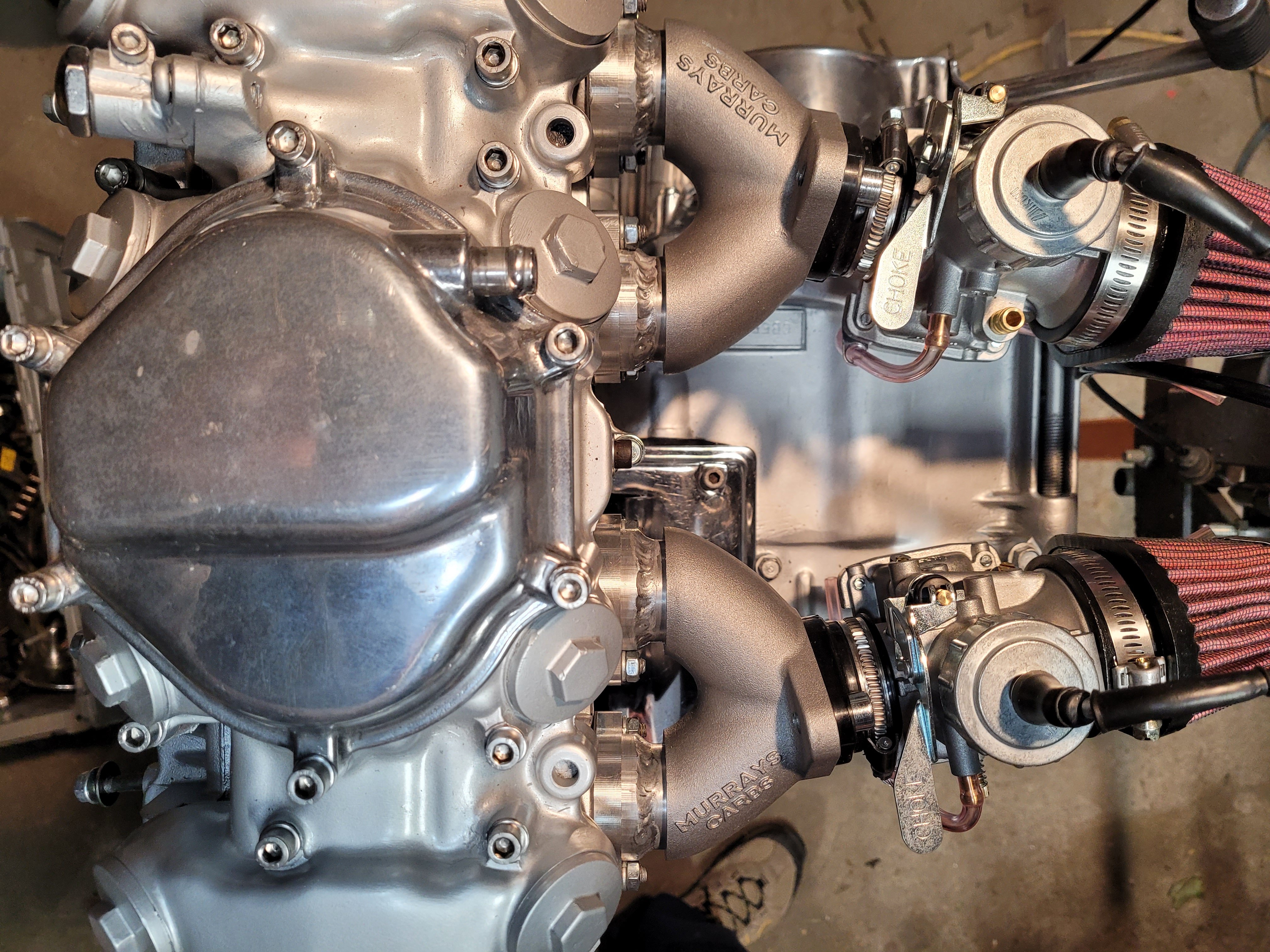 Super nice, shaping up to be a super ride when done.
C

Helicoil is installed and alternator cover is on which completes the motor rebuild and refinish. I may run a 20 amp service out to the garage this weekend....or not because it requires digging and I hate any job that requires a shovel. I have 15 amp out there now and if I run an electric heater over the winter, that won't cut it.

Since I am running pods instead of an airbox now, I had to get a breather filter. I got one from JP Cycles which has a mounting bracket. It's basically a Harley part. I swear this thing weighs about 5 Lbs. I guess weight savings on Harleys isn't a consideration.


My rear set came in yesterday from Cognito. .....another $500. I needed them as I have to do a slight frame modification for them along with a few other things. I'm looking forward to moving on to another part of this build.

BTW....I bought a rearset form Slipstream Cycle. They install on the rear passenger peg mount with no modifications needed. Unused. I had a knee replacement and can't bend my knee that much so I am selling them for $150. These are really cool looking and well built. I was very much hoping they would work for me. 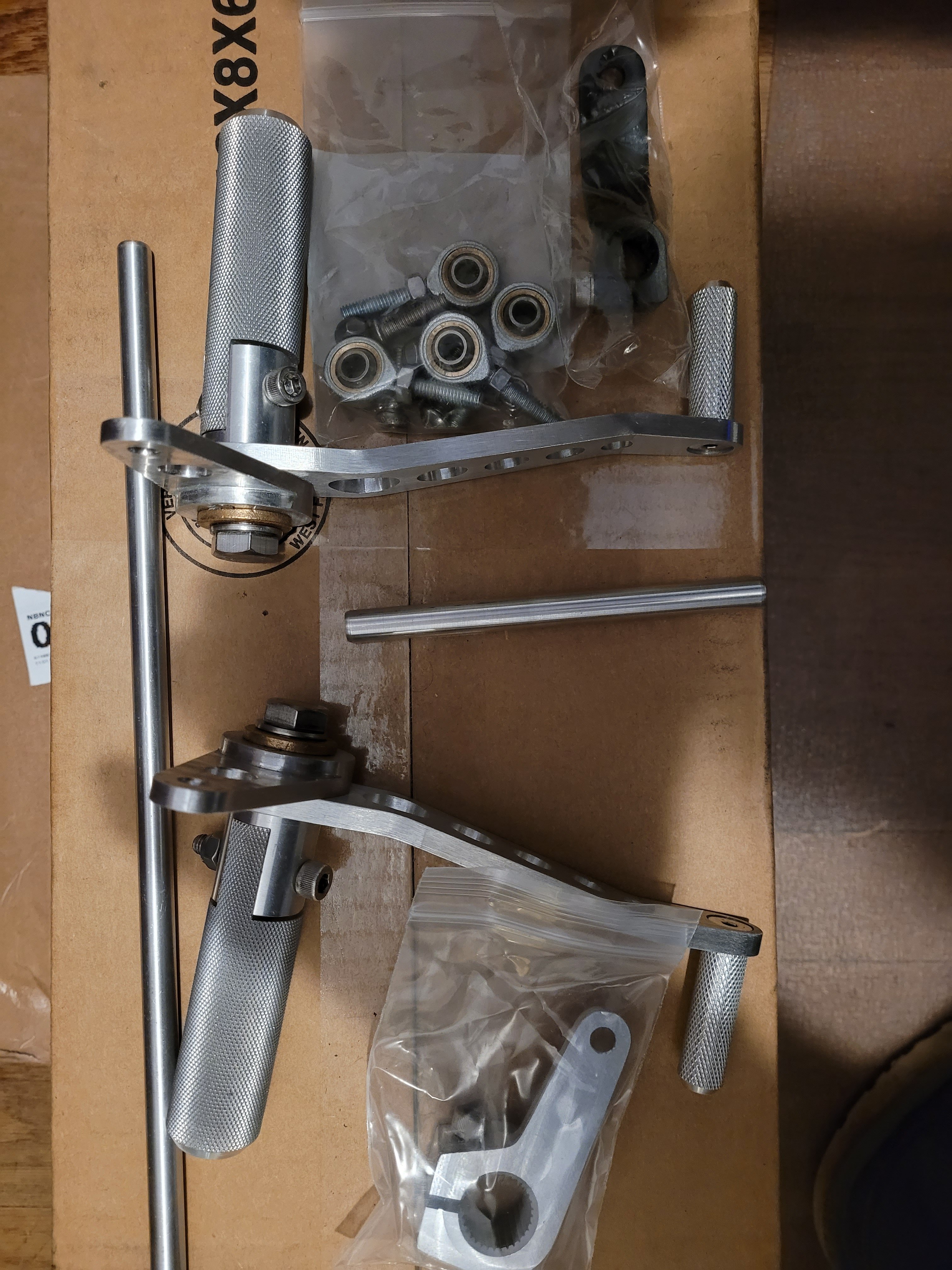 Although the larger oval-shaped Pods might be better, be prepared for jetting fun. Everything that I've read over the last couple decades indicates that they give headaches. Certainly at a minimum you should carve away any pieces that may restrict airflow to ports in the inlet to the carbs. Air boxes may not be pretty or cool looking, but were engineered in because they worked.
C

pidjones said:
Although the larger oval-shaped Pods might be better, be prepared for jetting fun. Everything that I've read over the last couple decades indicates that they give headaches. Certainly at a minimum you should carve away any pieces that may restrict airflow to ports in the inlet to the carbs. Air boxes may not be pretty or cool looking, but were engineered in because they worked.
Click to expand...

I have read repeatedly that pods on Keihin is extremely hard to make work. Mikunis on the other hand play well with pods. Those are Murray's Carbs set up designed for a CB550. Set up, jetted, synced and tested before they go out. They are 34MM Mikuni carbs and the pods come with the carbs, manifolds and throttle cable. They have an inpecable reputation of working right out of the box plus give a big boost in torque and look badass as hell. Murray knows his shit. In fact he is adamant in his instructions that if they don't run perfect, don't do anything, call him and he will walk you through it. He also reccomends changing clutch springs as old springs will probably slip. I did plates and heay duty springs when I rebuilt it. Everybody that has done these carbs has congratulated me. I'm very confident that I won't have any problems with these. I've also changed the ignition to electronic.
Last edited: Nov 5, 2022

If the Pods are from Murray, I'd certainly trust them.

If they came with carbs, you are golden. Murray has his shit together and will have the carbs jetted for use with the pods

I can confirm that you want to check on the clutch. My 550 would slip when I got on it with those carbs.


Sent from my iPhone using DO THE TON
C

john83 said:
I can confirm that you want to check on the clutch. My 550 would slip when I got on it with those carbs.

I did plates and springs. Not difficult or expensive and especially on a 45 year old motorcycle it just makes sense anyway.
C

Today I was rearranging my garage to pack the finished motor away and get room to do the frame. Afterwards I was sitting there planning out my next steps and figuring out how to make Cognito rearsets which are designed for a 550K work on a 550F. It's a little bit of work but not bad. As I was sitting there I looked over at my other bike and was thinking that it's a pretty cool motorcycle. 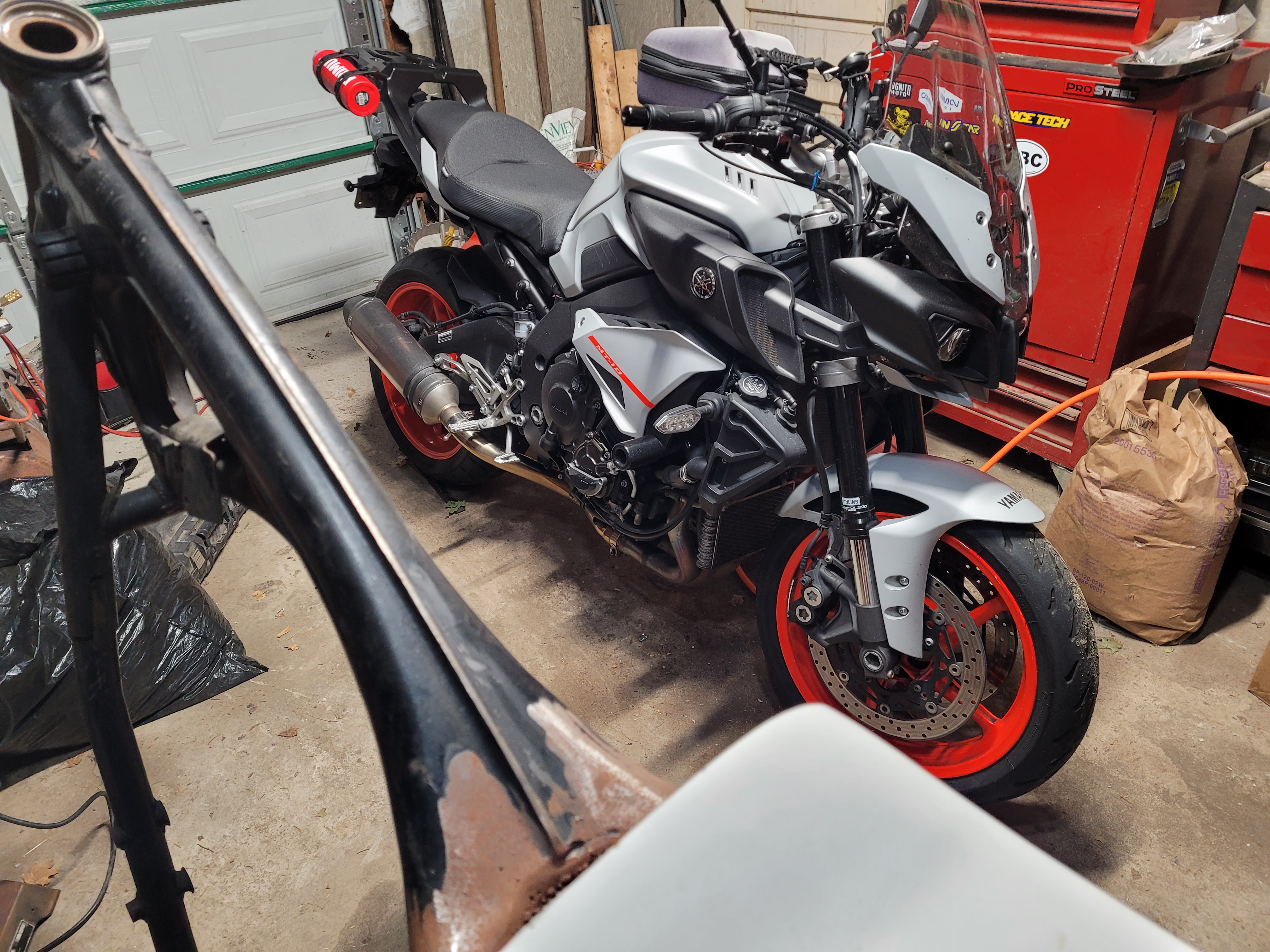 As the weather in Massachusetts is getting colder, I have to run an electric heater in my garage. That's not a problem but as I only have a 15 amp service out there, I can't run any tools without tripping a circuit breaker. So today, I have to dig a trench for the house to the garage and put a 20 amp line out to the garage. Just one of those pain in the ass things we have to endure so that we can play with our motorcycles. It's relatively warm out today so I might squeeze in a short ride on my MT 10.
You must log in or register to reply here.
Share:
Facebook Twitter Reddit Pinterest Tumblr WhatsApp Email Share Link