Sounds like a hell of a job? the cover looks a little ruff, are you going to paint the engine covers or polishing them?
did you use sandpaper on the engine, cyl, and head as well?

I gotta say, you got the force with you if you "handblasted" all the components 8)

anywho, the best is that you're happy with he result.

Lucky you, getting the frame done, every time i go into the garage i find something new to cut off or weld on but i think i'm getting it sandblasted by the end of next week.
and i decided not to go with powdercoat this time. i want to keep the possibilities open for painting it in any color if i come up with something cool for a paint theme.

have you ever heard of myrphys law? guess what happened last night,... i was out there and thought i'd check over my engine after i put it back together and would you know the fu.... would not shift gears. i had to take the whole reassembled engine back down to pieces. found NOTHING wrong. and now it shifts gears. guess something had to much tension or something. . i think i cried in my sleep.

Post more pics of engine and other progress, fun to look
1

Looks to me like he's going for a brushed aluminum look. I dig it. 8) I would probably clear it though, to prevent it from oxidation and corrosion. Not sure what effect that will have on the finish, if it'll keep the brushed look or not.

Man, it's good to hear from you guys! I felt like I was just talking to my self on here.

You are correct Chris. I'm going for brushed. I'm not much of a chrome person myself, but I didn't want everything to be black. Brushed seemed like the natural alternative. I will be shooting the jugs black though then sanding the fins to bring back the exposed metal. I can't get in between the fins, so my hands were almost tied there. Haha Vain, my fingers don't feel like they've got the force. They feel like I've been sanding 40 years of oxidation off aluminum with sandpaper for 3 hours straight!

As far as clearing it goes, I'm definitely gonna be doing that on the outer case(Crankcase, Alternator, etc) and on the jugs but since Rustoleum High-Heat has a curing period, I might just say forget it for the bottom end. Too much work to fit that thing in the oven! Actually, just found out that I don't have to bake anything, so it will all be getting a few coats of clear.

I decided not to shorten the frame. The only place you can cut it and the rear wheel still have enough travel room is right behind the shocks, and I didn't really want my frame that short. I may regret that in the future, but that's what it is and I'm sticking to it.

Ah, yeah, I thought a lot about painting my frame, but I would have just shot it black anyway, so it didn't seem worth it. Plus I would have had to drop quite a few bones to get it sandblasted(No way I would hand sand my whole frame) and I think when I got it quoted, it there was a $60 price difference for powder. Figured it would make my life easier, so why not?

HAHA I have heard of Myrphy's and that is an awesome example of it. Man that is the absolute worst. Funny though. I'm more impressed that you can tear your engine down and build it back up in one night. Impressive!

Before I post some pictures, where are yall's bikes?! Chris last time I saw where you at was over a week ago, and Vain I've never even see your bike. CMON! 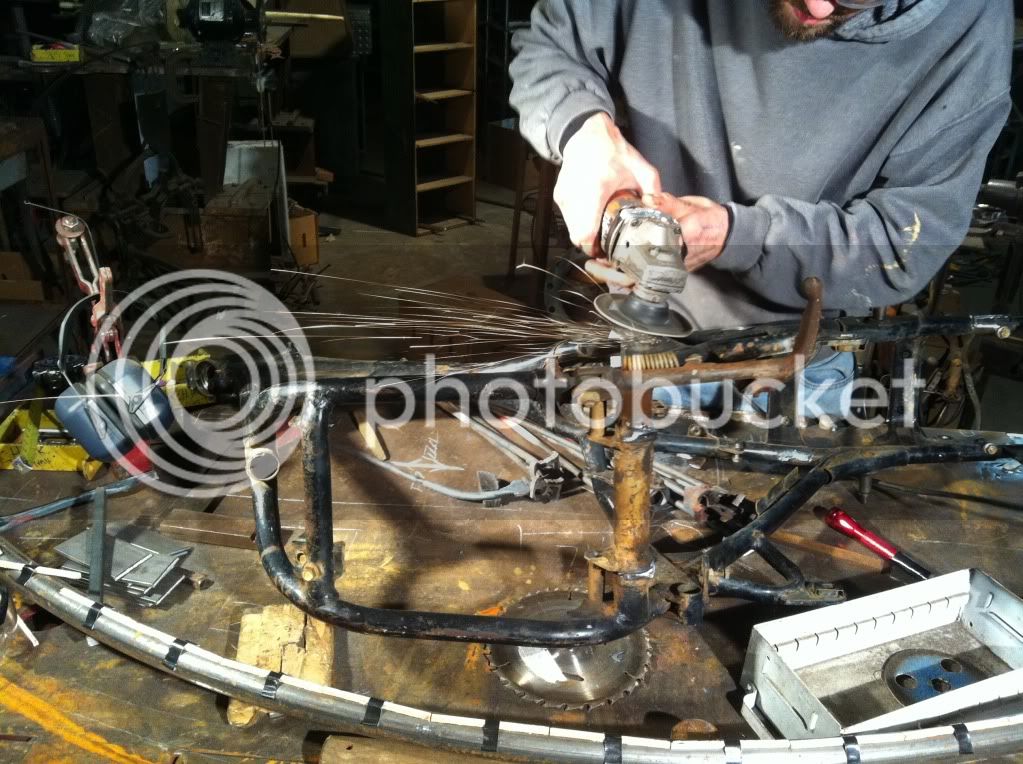 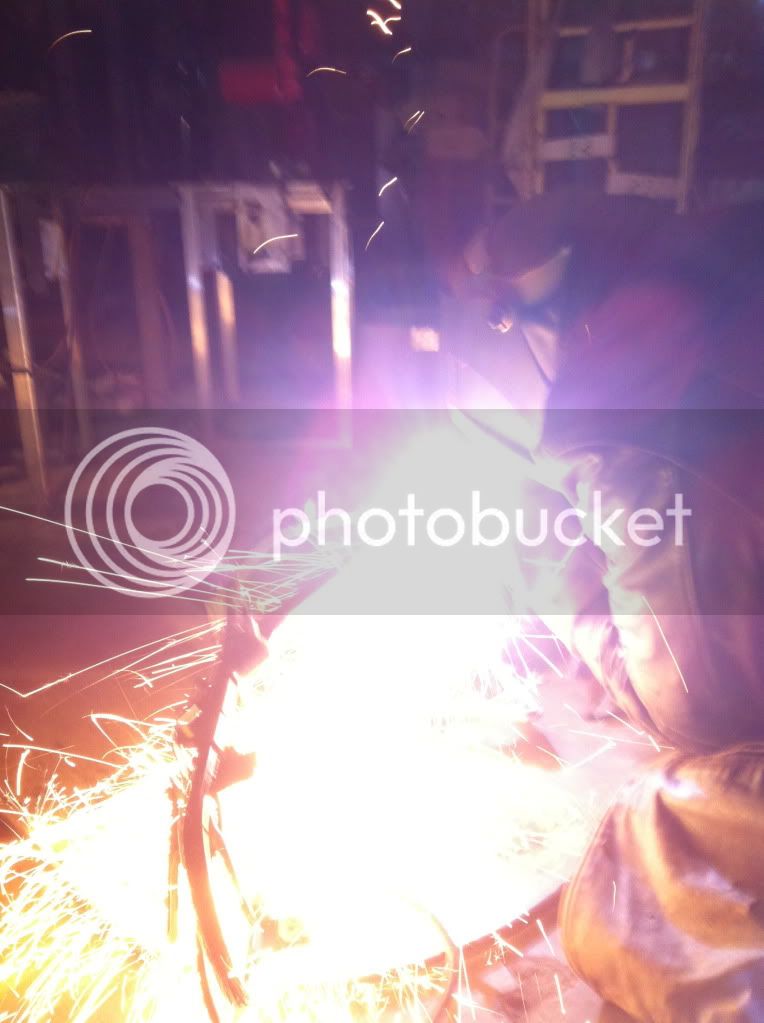 And how it looks now. 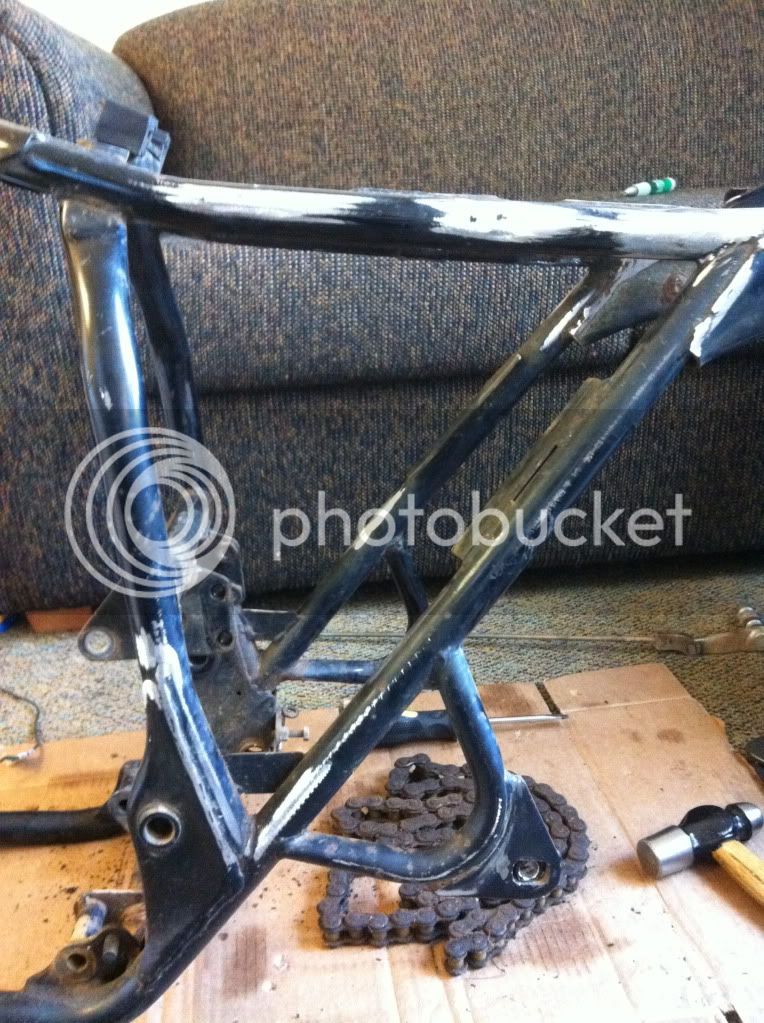 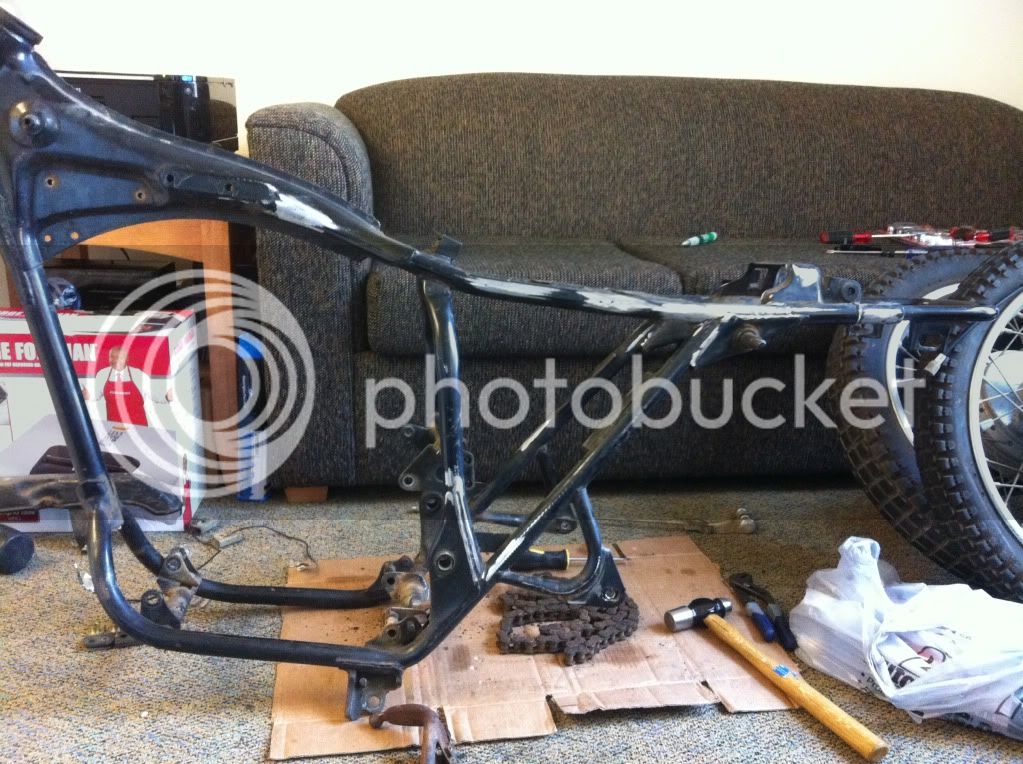 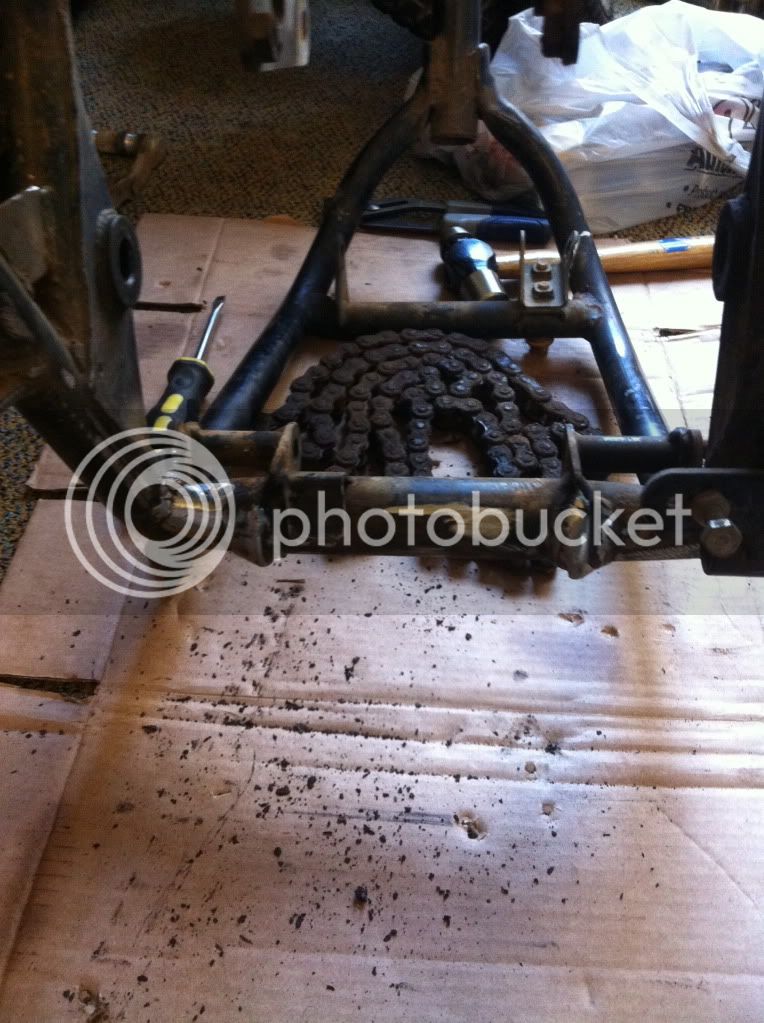 Progress on the engine. 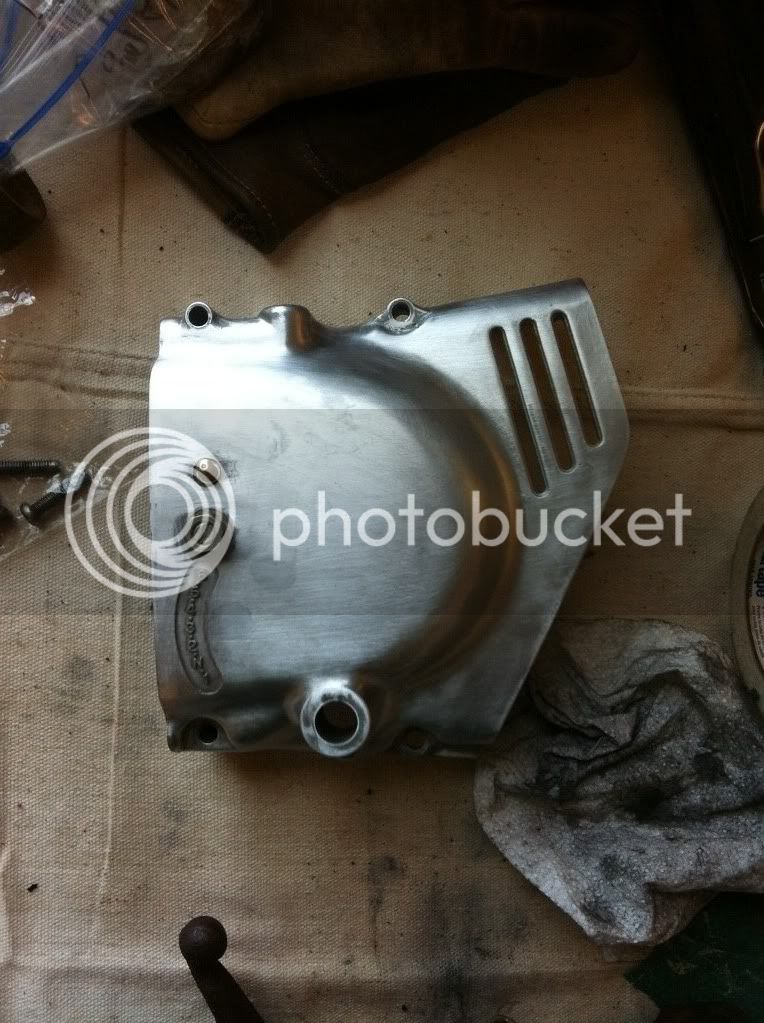 Gonna be a cool bike fox. i like the idea of brushed covers.

How's the ears? funny thing seeing you with the grinder and sparks everywhere and the protectors hangin 2 inches away haha.

Did you check out my "lonely" build thread? it's pics of how it used to be and some work at least.

uploading some new ones now..

Thanks man. I'm pretty stoked. I'm ready to be putting it back together. Been sitting on my living room floor for too long now.

Haha, that's actually not me. That's Matt, a crazy-ass metalworker I know in town. He had earplugs and I had ear protectors.

I did go take a look actually. Pretty sick stuff you've got goin on over there. Can't wait to see how it all turns out.

Nice looking side covers Fox I like the added texture you get with the brushed look. I might think about that for mine instead of paint
1

I'm also not much of a chrome guy. Nor am I a sit-on-your-ass-polishing-for-100-hours guy either. I had actually thought about having a brushed finish on various parts of the bike, now you're making me think about it some more. I have been super busy with work lately, but I did get the seat mold finished. Been working on designing my tank, got that done last weekend. Now I'm working on designing a triple tree. ;D Found out a friend of mine has a much larger sandblaster on a farm that I can use, so I will be getting the frame and maybe some various other parts blasted this weekend. Cherish your free time while you have it...working 9-10 hour days + Saturdays does not leave much time for wrenching!

I've thought about doing the brushed look and after seeing you do it I'm gonna have to do it some day.

Thanks for all the compliments guys. Much appreciated! I actually really like how everything is looking. Brushed is a great option if you want raw metal, but don't want to polish till your fingers bleed. Don't get me wrong though, it isn't a walk in the park either. With that being said, few things have happened since my last post.

Put two coats of clear on the engine cases that have already been sanded(Prevent further oxidation), and It looks GREAT! Gives it a nice glossy sheen so it will still sparkle in the sun, but doesn't take away from the brushed look. I just shot them so I don't know what it's gonna look like dry, but so far I love it.

I wrapped up the exhaust. Only took me one 1x50 roll from DCC. Napa steel-ties on the end.

I started sanding down both my wheels and forks. Forks are coming along nicely and I'll post a picture of them when I finish. As far as my wheels go, I might just blast those suckers. It nearly impossible to get them clean by hand-sanding.

Frame is at the powder coater and should be back in two weeks, so my goal is to have all parts ready for reassembly when it returns. Hope this works out. 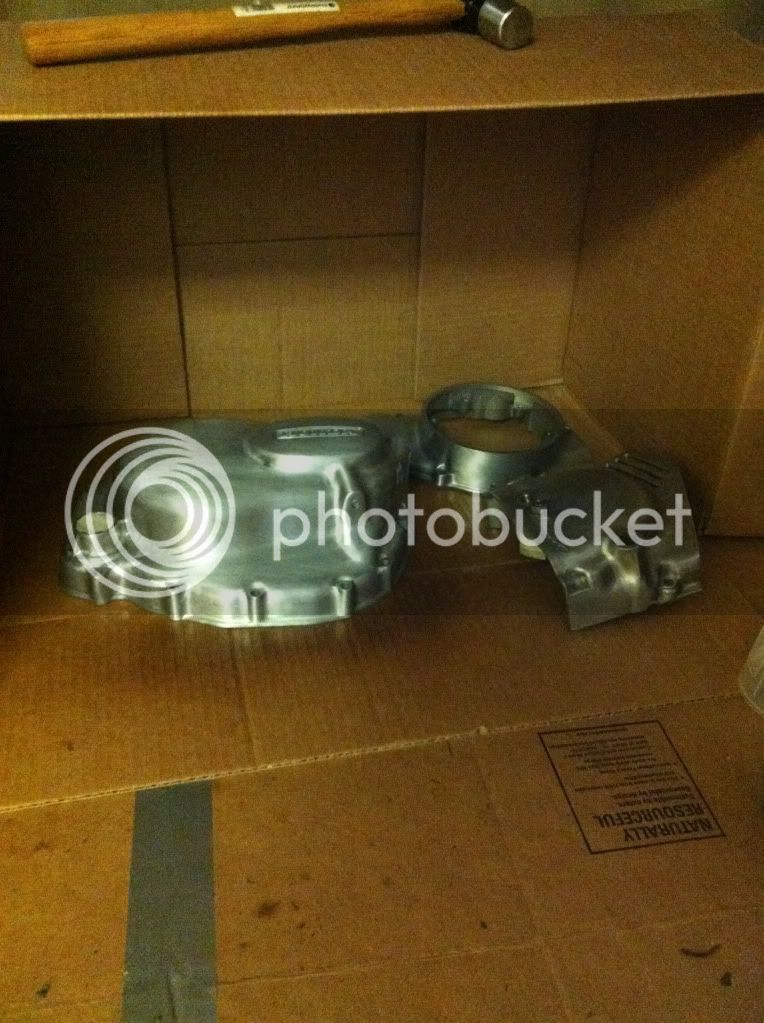 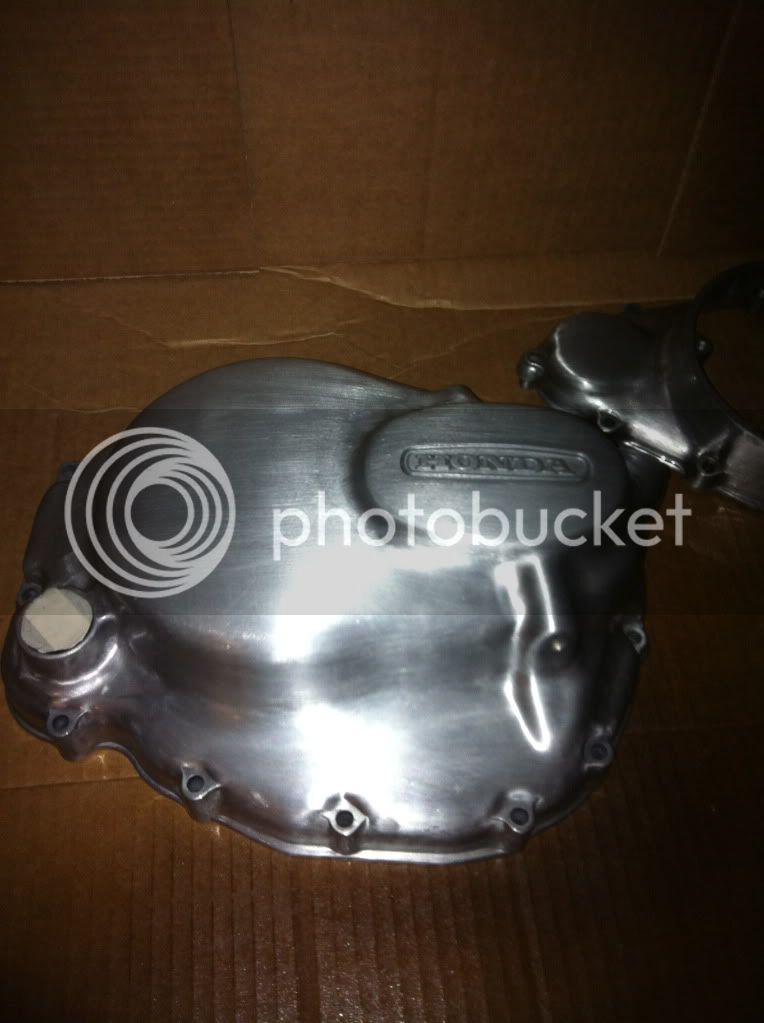 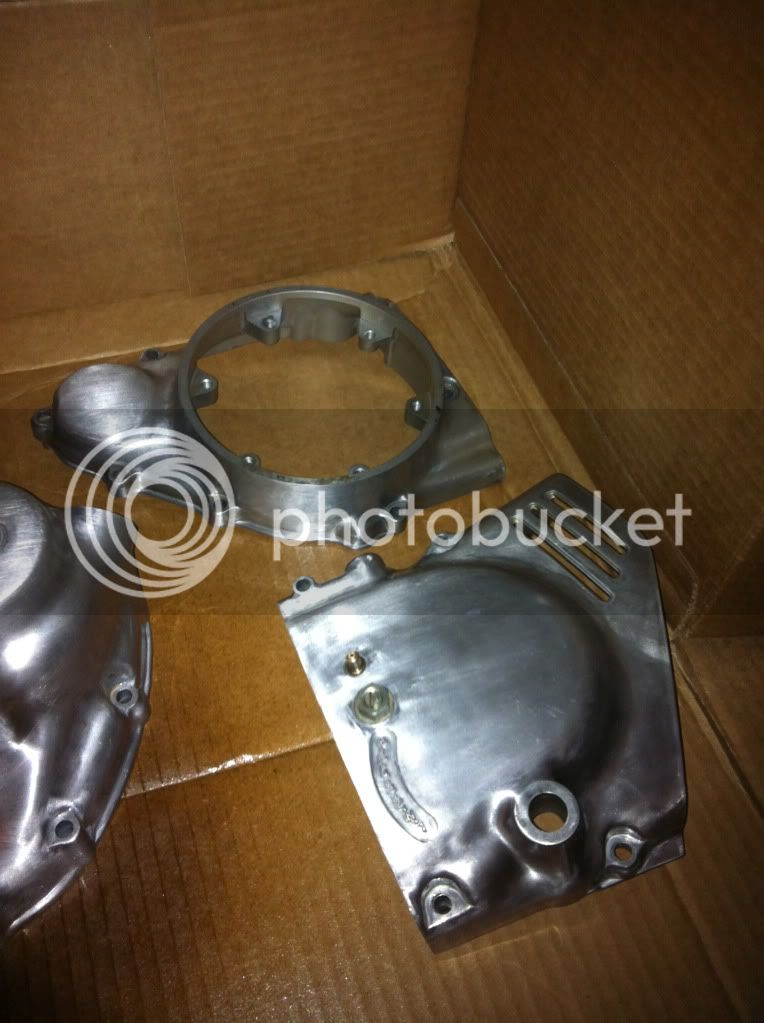 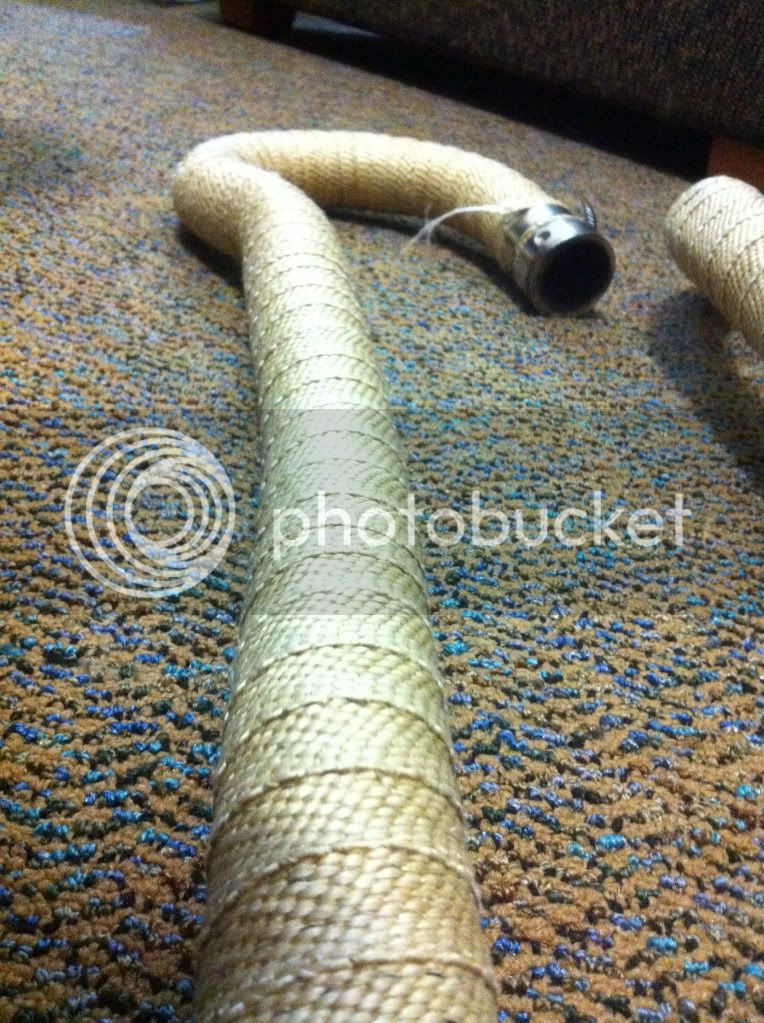 I've been keeping this one close to the chest, but here's a sneak peek at what's to come! 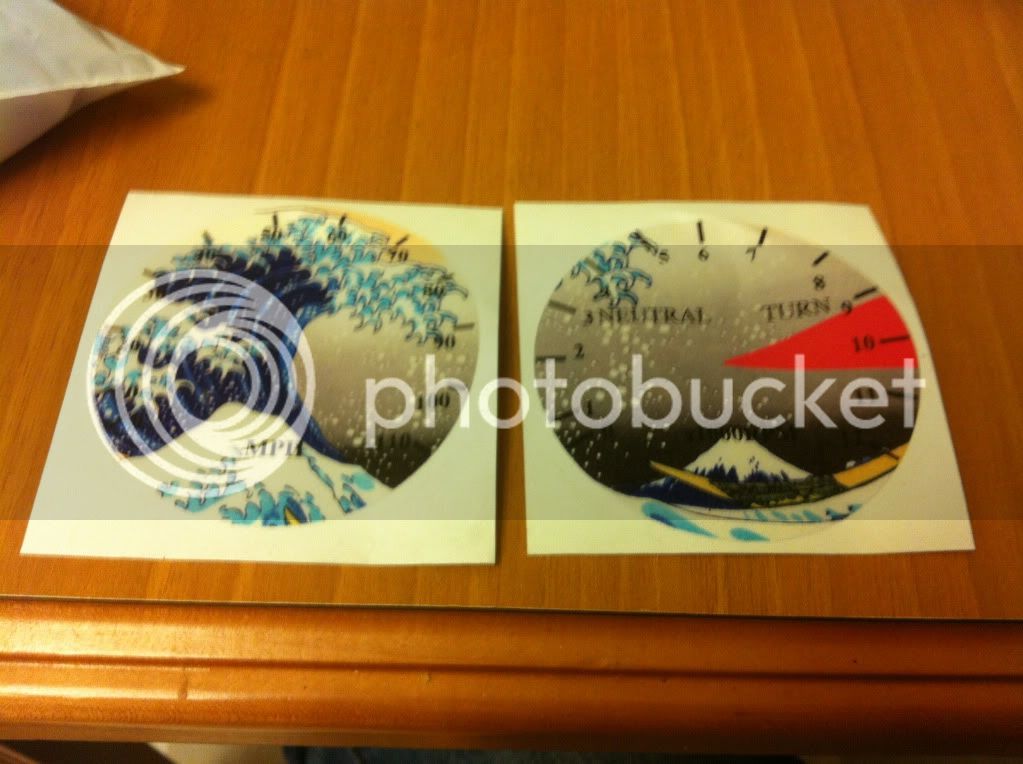 THANK YOU for noticing. I've been waiting for someone to mention it! Not gonna lie, I feel pretty damn cool doing all this in my apartment.

Chris, all work and no play makes Jack a dull boy.
Just remember, in college, you don't have the money for all the neat little toys you can afford when you have a job!
1

A cruel reality about life. Time, or money. I did get my frame blasted today though! (Hmm, maybe I should be updating my OWN build thread... :)

This looks good Fox, can't wait to see the bike finished.
Keep it up! 8)

I like the idea of living room build fox!

I'm also in a similar situation as you are being in college, building my cb400t in my living room.

I also have hand brushed my covers and fork legs. I'm not too big on chrome either. How do u plan on keeping them looking polished? I'm still up in the air there.

I like your style on both the living room and the build.

if you use a scotchbrite pad from the kitchen on those cases, they will come up even better. i hand sanded all mine. makes ya feel like you've done some real work huh!

I did scotchbrite then I did mothers mag and aluminum Polish. Just don't want them to oxidize too much.

Progriffin,
Haha a fellow living room builder is always welcome. We may not have all the fancy tools, but damn if we don't still do quality work! Do you have any picture of your current get up? Maybe you could start up a build thread, I'd like to follow along with ya. By the way, thats an awesome avatar picture. Is that you?

Thanks for all the compliments gents(Chris and Vain always good to hear from y'all)! Glad to have you guys on board. I haven't made much progress since my last posting, but next on the list is painting the jugs and cleaning/sanding the bottom cases. Pictures should be up soon.

SCARE!
I actually did use a scotch brite after each level of sanding. Get all the metal shavings out of there and such. Those things really were designed to work on motorcycles...

Atx360
As far as keeping them clean, I put two coats of Rustoleum Engine Enamel(500F) clear coat on all the engine pieces. Hoping that should keep all th oxidation and rust off of it. I'll grab a few pictures of all the finished pieces and toss them up so you can check it out.

A quick to-do list for this week(mostly for my own benefit)...
Paint engine
Media blast rims
Sand and clear coat forks
Rebuild gauges(if I have time)

Keep an eye out for pictures/posts, and if you have comments/questions, don't hesitate to ask.


atx360 said:
I did scotchbrite then I did mothers mag and aluminum Polish. Just don't want them to oxidize too much.
Click to expand...

Yep thats me in a another ride I love the most Fixed Gear Bike. Also known as fixie. Modification of a track bike. Without any brakes, only stops with you foot pedaling backwards.

I was never interested in 4 wheels haha always two wheels. now my eyes turned from bicycle to motorcycle thats all but.

Cafe racer is such a addicting project that I can't let go.

As soon as I get her running first, I will be posting a build thread of non-loved(crappy looking frame which made all the people hate to modify into a cafe racer) cb400t to a Cafe Racer.

I will be following yours and steal some ideas from you