By the 9th of September this project will actually have gone a full year. The original plan looked somewhat differently, i.e. build an XS750 rig with a Dnepr sidecar and then sell my old and trusty (everyday) SR500 sidecar. Now almost a year on it looks a lot more promising that I'll be done in about a month. But why don't we start at the beginning?

It all started six years ago, when I sold an XS750 with a Dnepr sidecar. I had the sidecar fitted by a company and even though it wasn't done too badly youthful tendencies towards "spirited riding" and some deficiencies in the engineering of said subframe lead to multiple times cracking the frame. I tried a few other sidecars in the meantime and even though they all were nice (well the Jawa 350 a little less so, but on the contrary the afforementioned SR500 with a Velorex was even nicer), I wanted a sidecar that was usable as a full-blown car-replacement with a hefty engine and a subframe that was so overbuilt that I wouldn't have to worry about breaking the frame (again).

My friend Mr. K. had a lovely XS750 sitting in his garage, which he bought basically, because I told thim that this is the sweetest sounding 4-stroke triple from Japan I've ever heard (and a few others said the same). Unfortunately he had a lot of bad luck with spares and dealers and in the end got fed up with it and offered it to me for a very decent price. 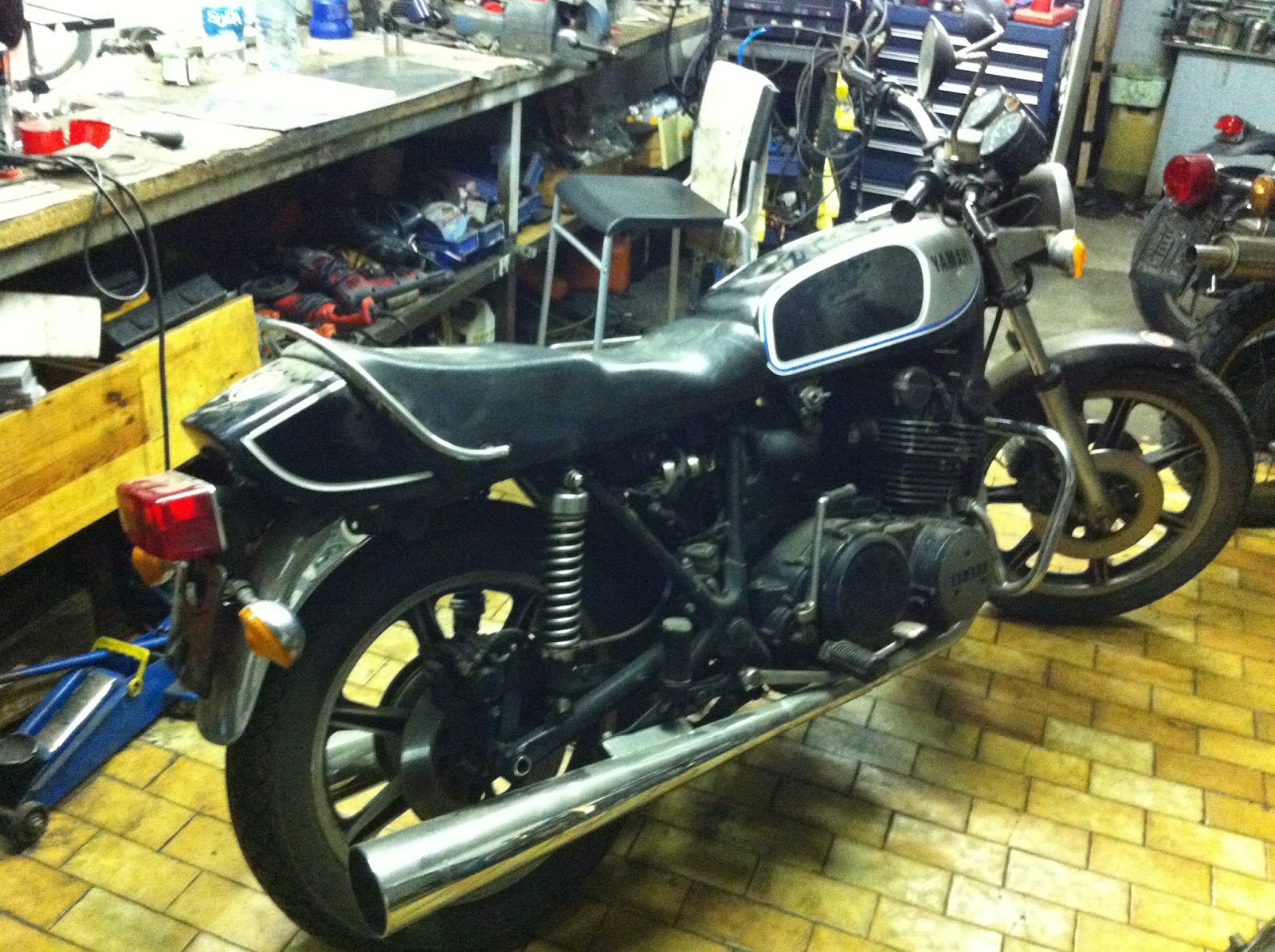 Getting a good SOVIET sidecar proved to be a bit more tricky, mainly because the simple rule is: The older the sidecar the better steel and the less parts have been simplified. So I was aiming to find a 1960ies or 1970ies sidecar at the youngest as these already had all the features, but still used the heaviest gauge steel and still had the split-ping swingarm. Luckily I ran into a guy from Hungary, who was trying to import Soviet-era sidecars to Austria, not knowing that registering them with the papers he was able to provide was near on impossible. As soon as he found out, he got a bit desperate as he could only break them for spares, which in its own right proved tricky as the bikes didn't have many good parts on them... Long story short after a while he got rather desperate and was selling everything off cheaply to cut his losses and I got the sidecar for a very decent price. (Even considering the condition it was in!) 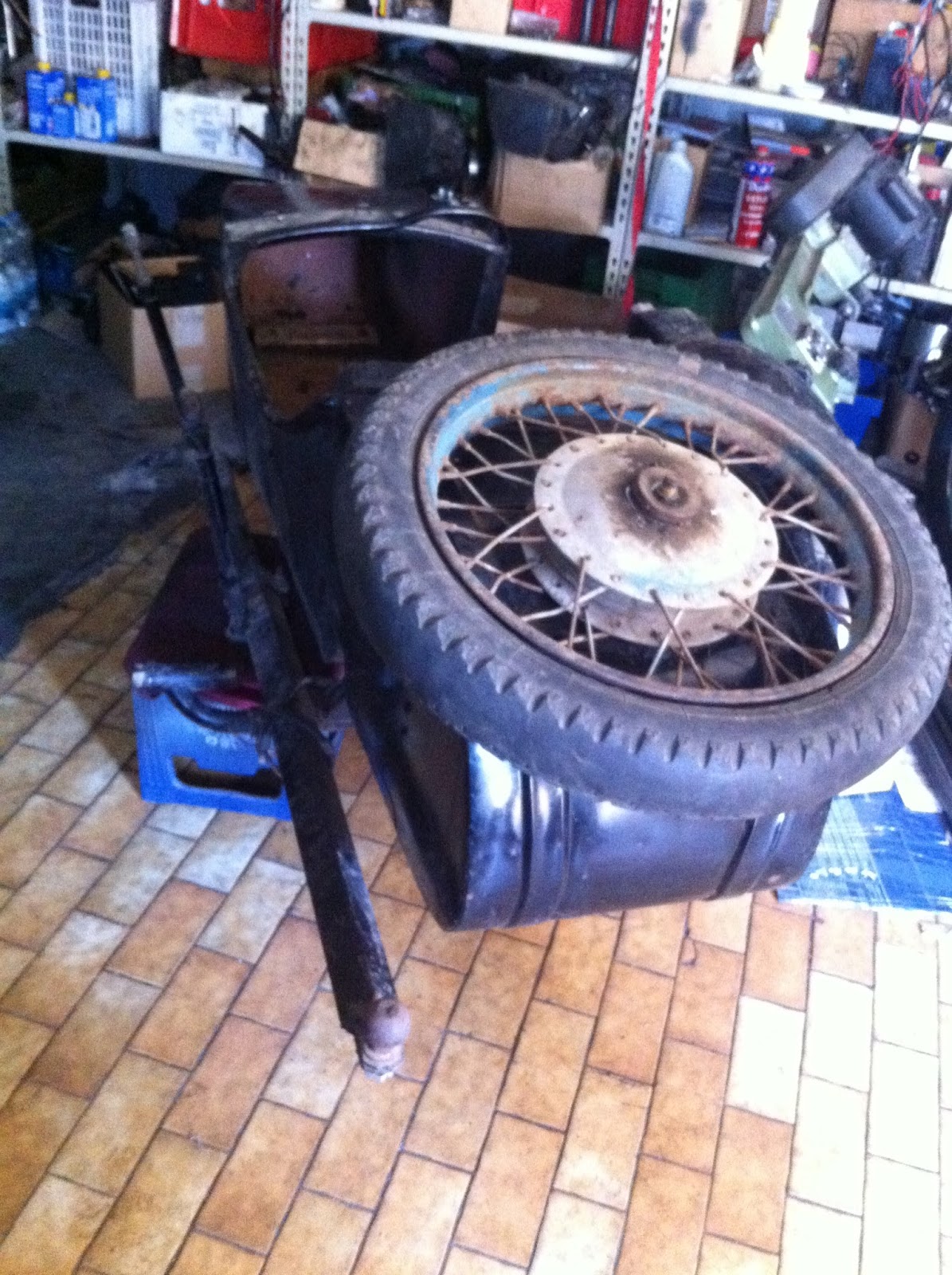 (Yes, that's a tow hook. They don't use those sidecars solely for recreation, but as mini-tractors and everything...) 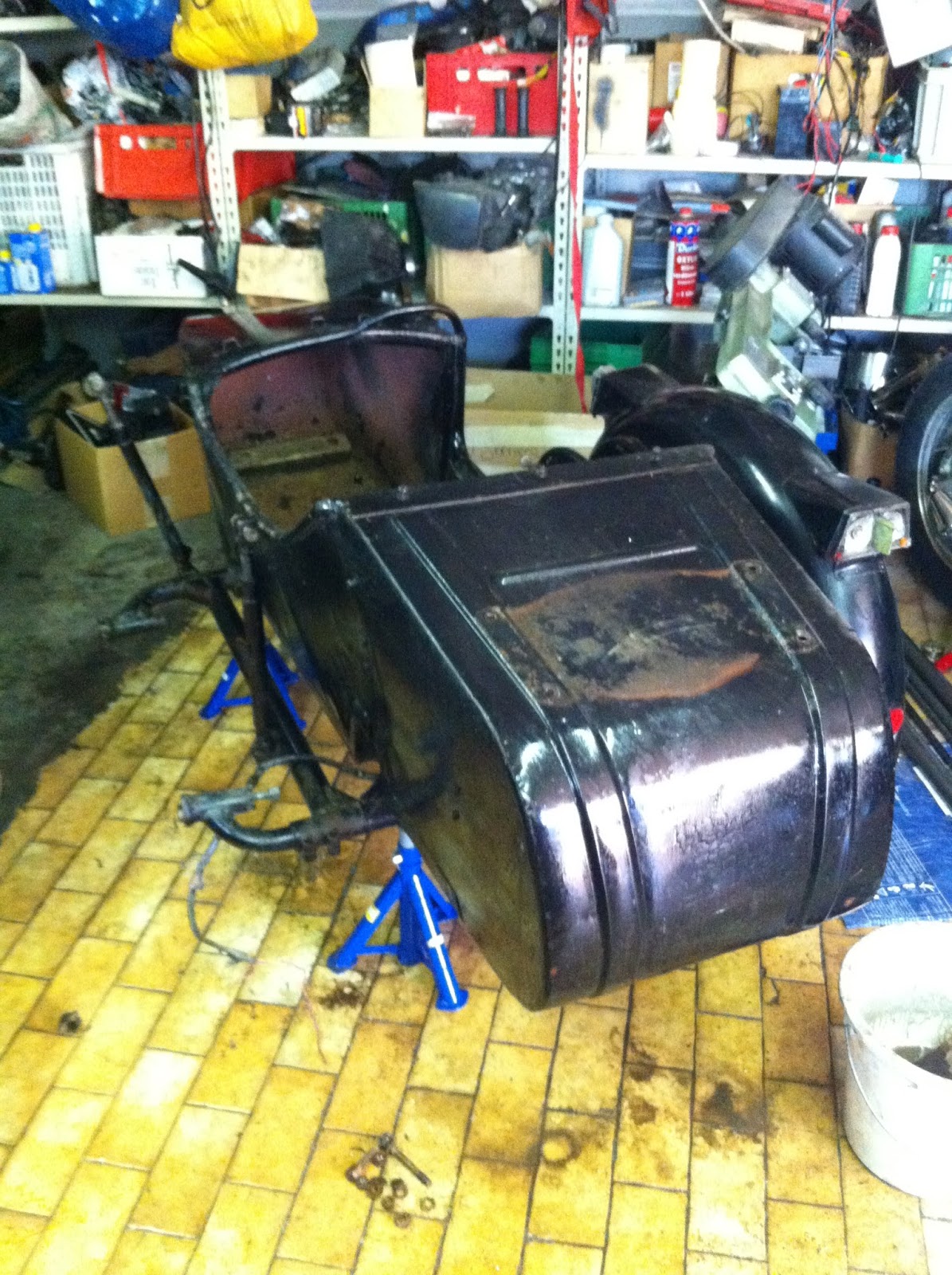 With the sidecar spare wheel removed it became apparent, that his sidecar was well cared for and I only found one or two holes that needed patching up.

The next step was to build a subframe to attach the sidecar to. (This ran through quite a few iterations and modifications until you see what you see here, but this is meant to be a summary.)

I've built a two-part setup a front cradle, which wraps around the engine and takes the upper and lower sidecar mount and a rear subframe, which ties in both upper frame rails and spreads the load (as evenly as possible) over the area from the passenger footpeg mount to around the swingarm pivot. 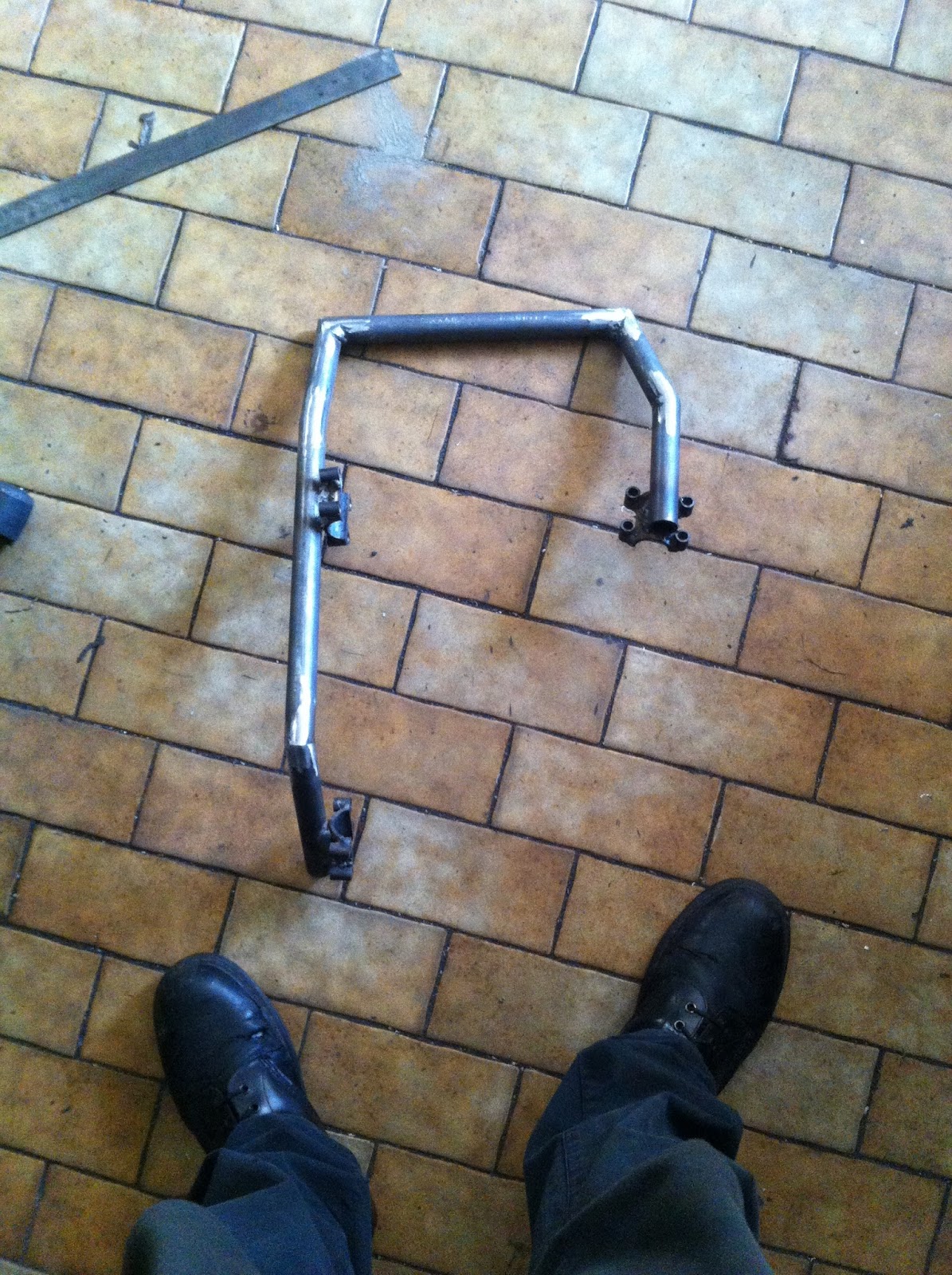 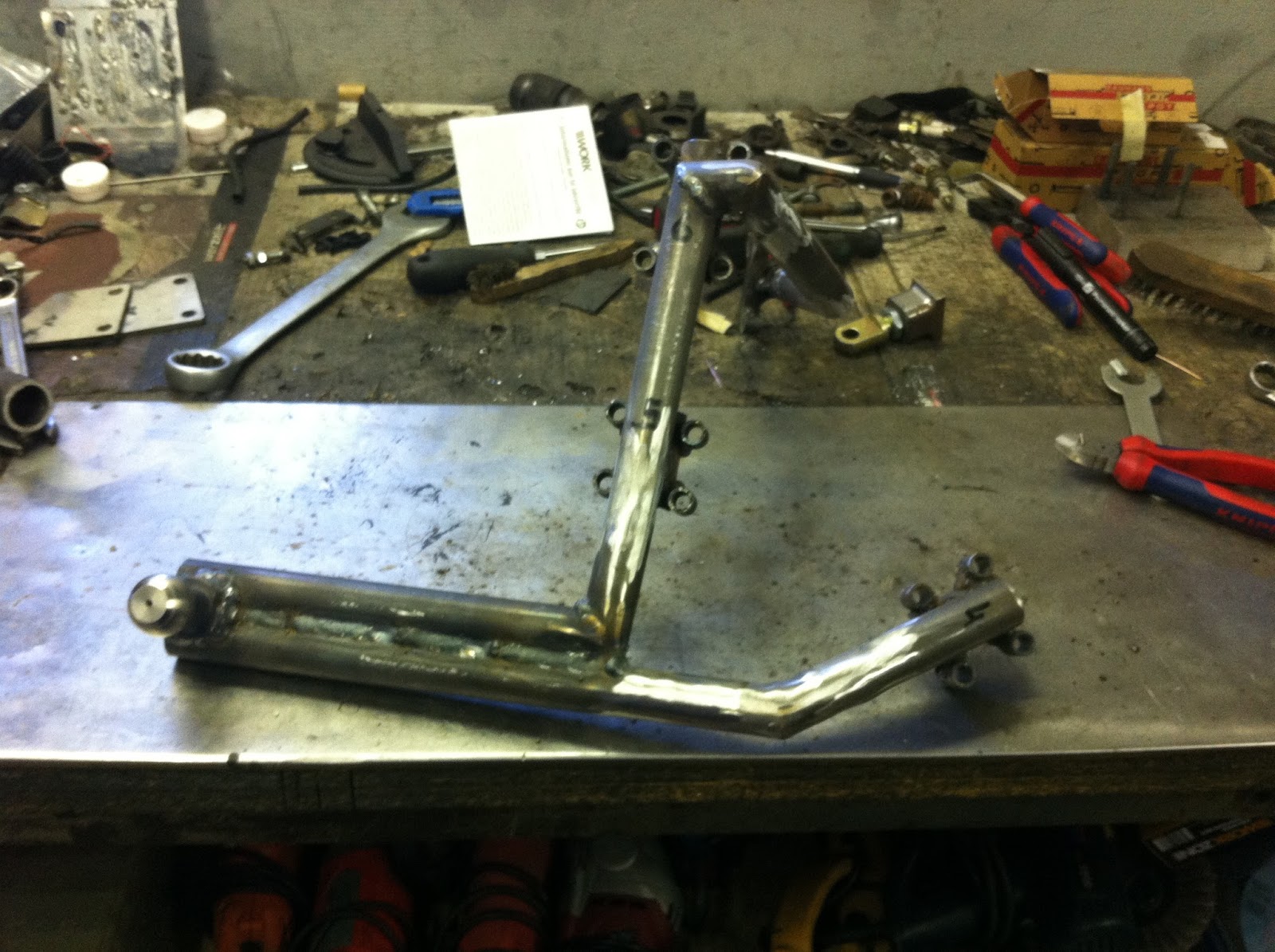 As that's a bit difficult to imagine, here's a few pictures of them installed: 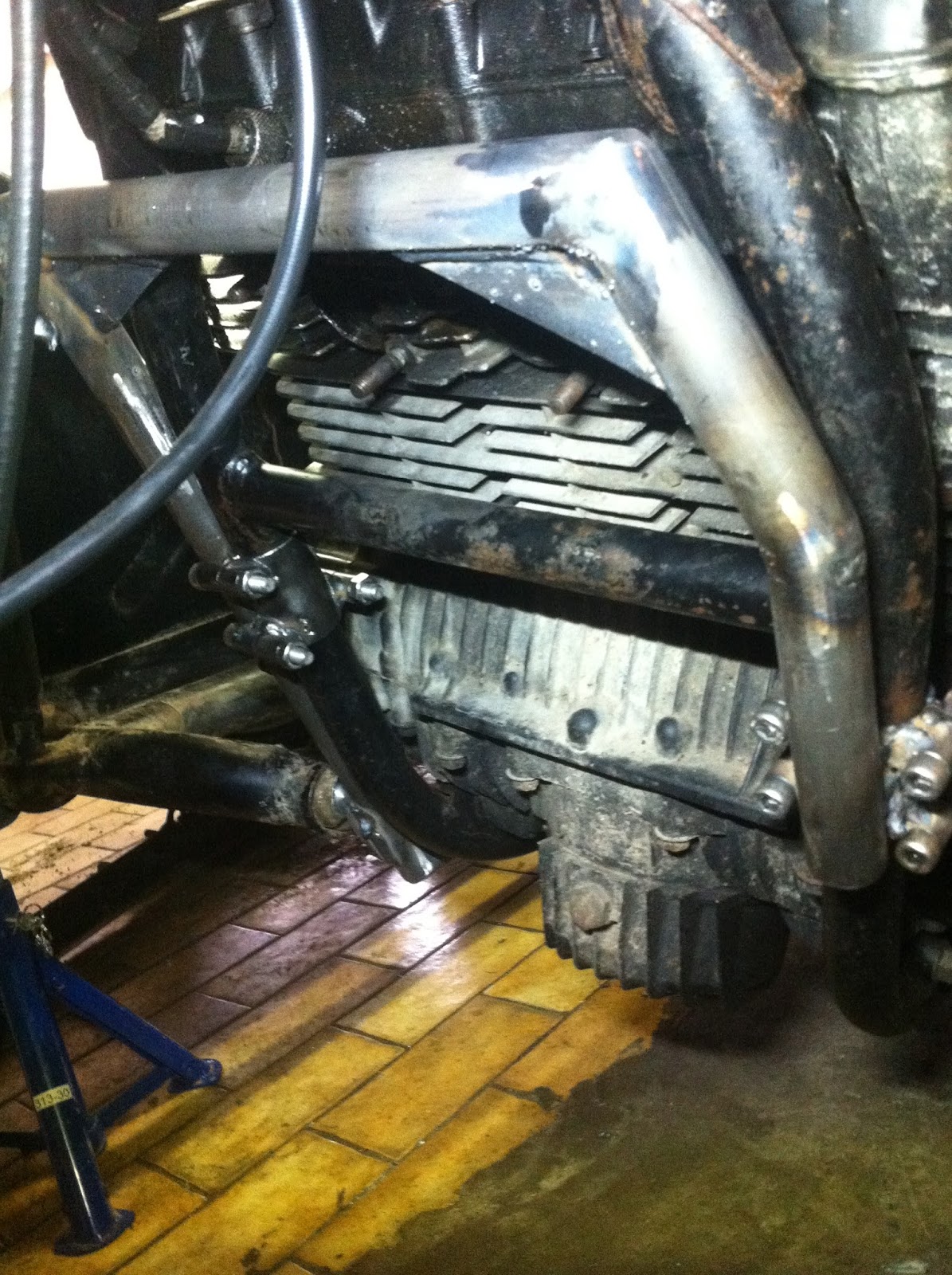 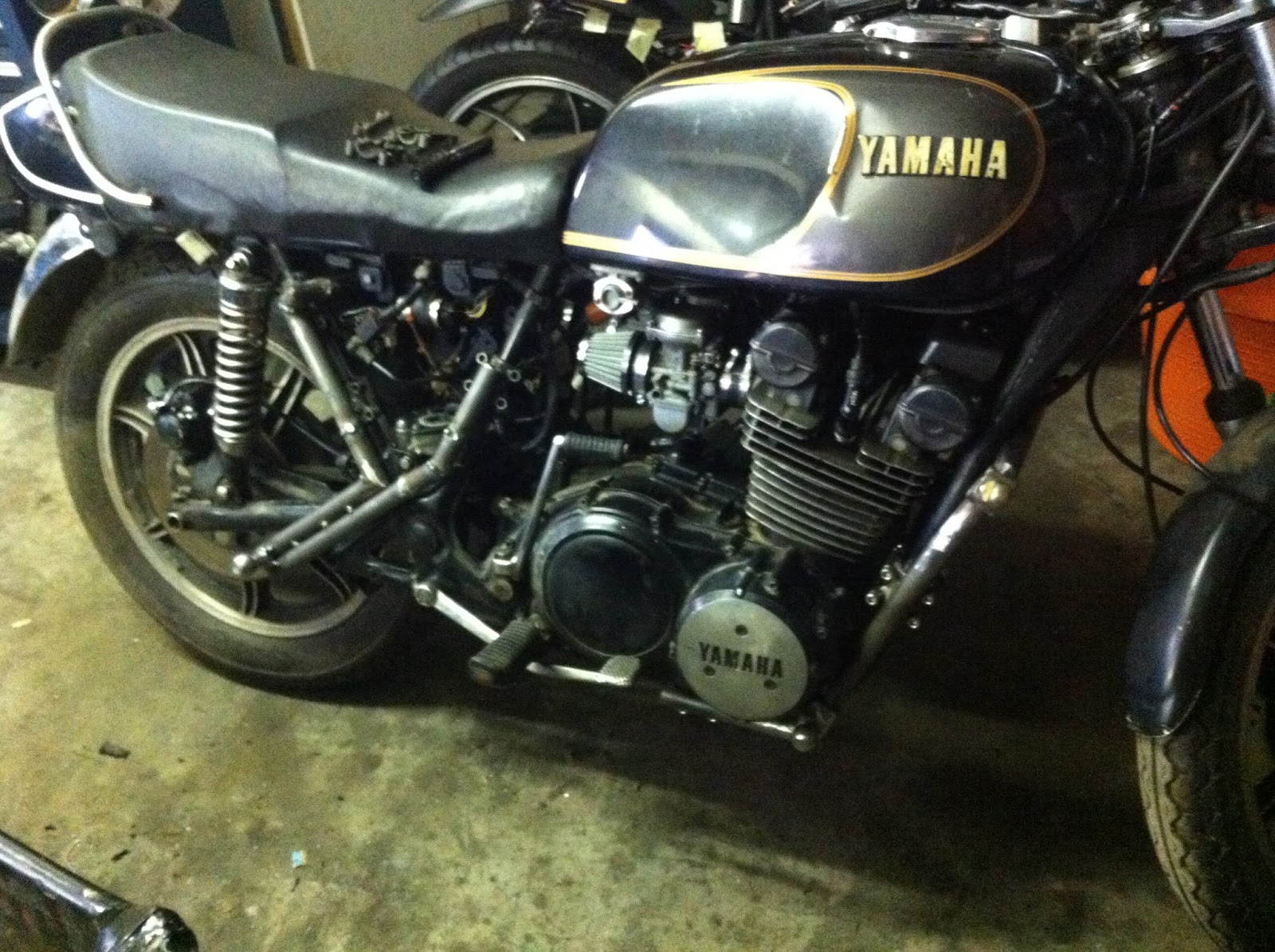 and the rear subframe from the top, where it connects both sides of the frame: 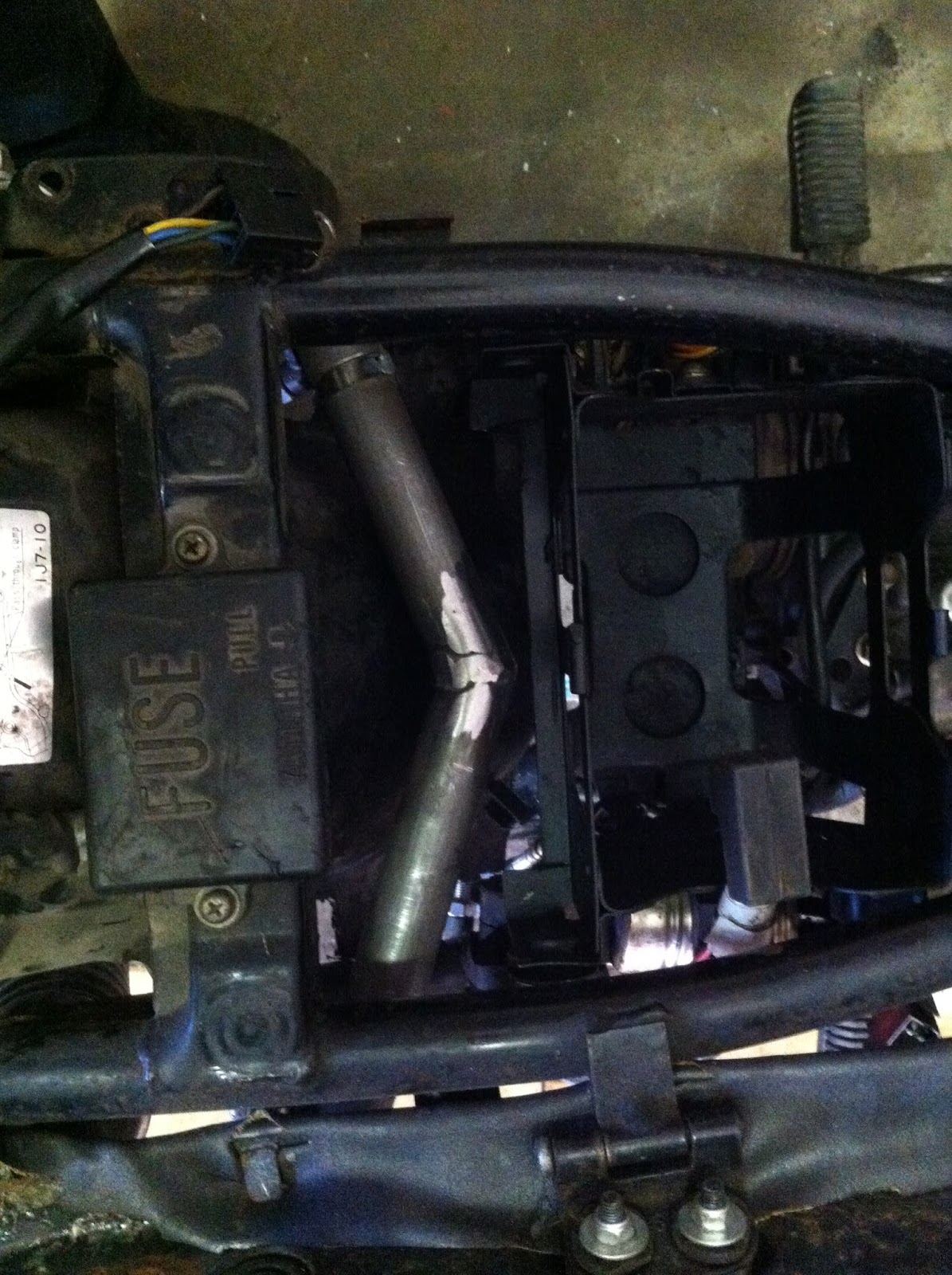 In the end I had to add another brace to the lower-section of the rear subframe, but I can't seem to find any pictures of it anymore.

As the sidecar is mostly going to see usage during the Winter months and is literally parked outside all year round (seriously, with the sidecar fitted, I can't get it into my workshop), I spend more than the casual thought on how to rust-proof as much of the bike as I can. The next step: a modified Triumph T300 exhaust.

Step one: Get a Triumph exhaust 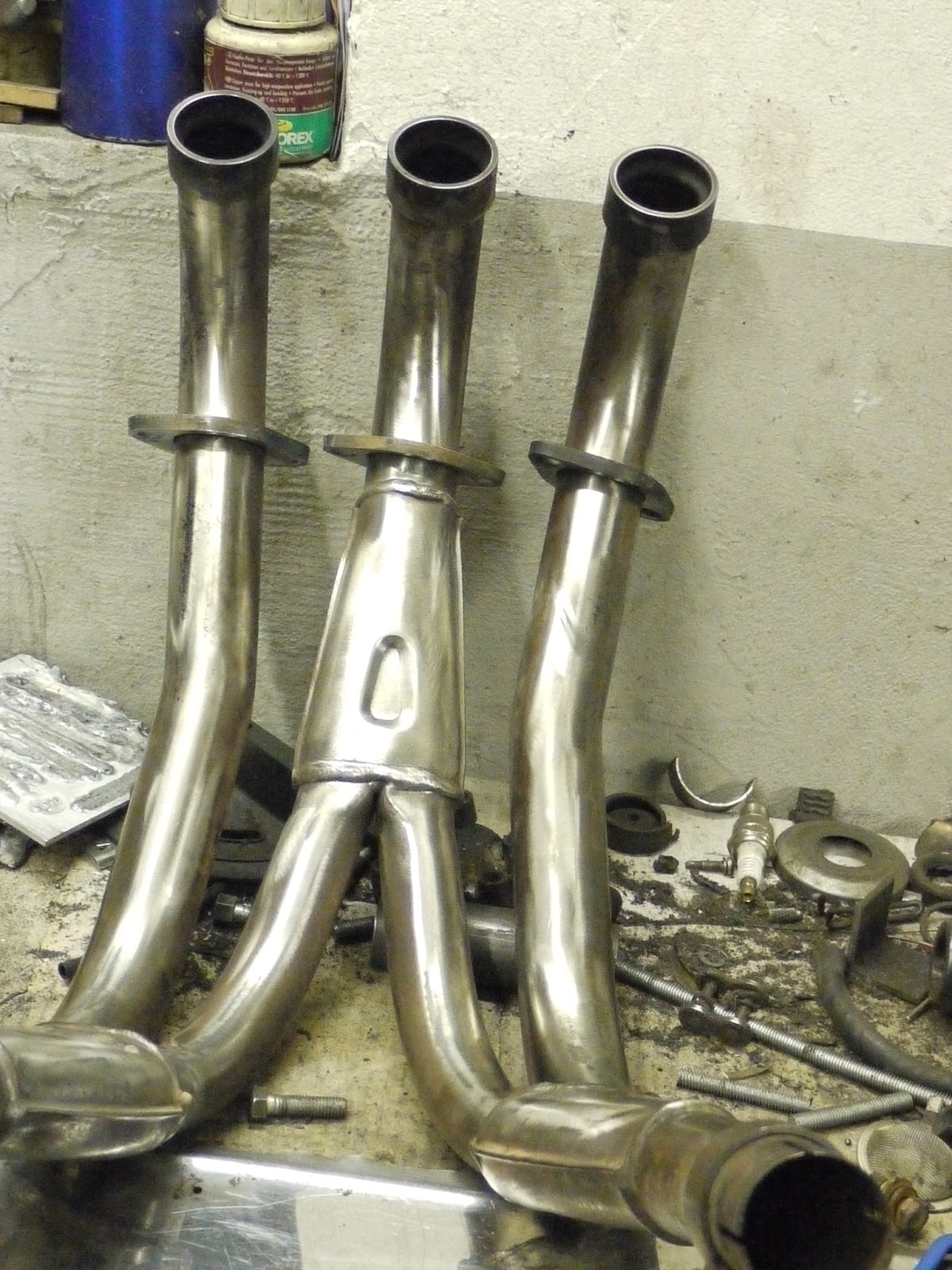 Step two: drill some holes into some shiny all stainless steel silencers made for industrial generators and such 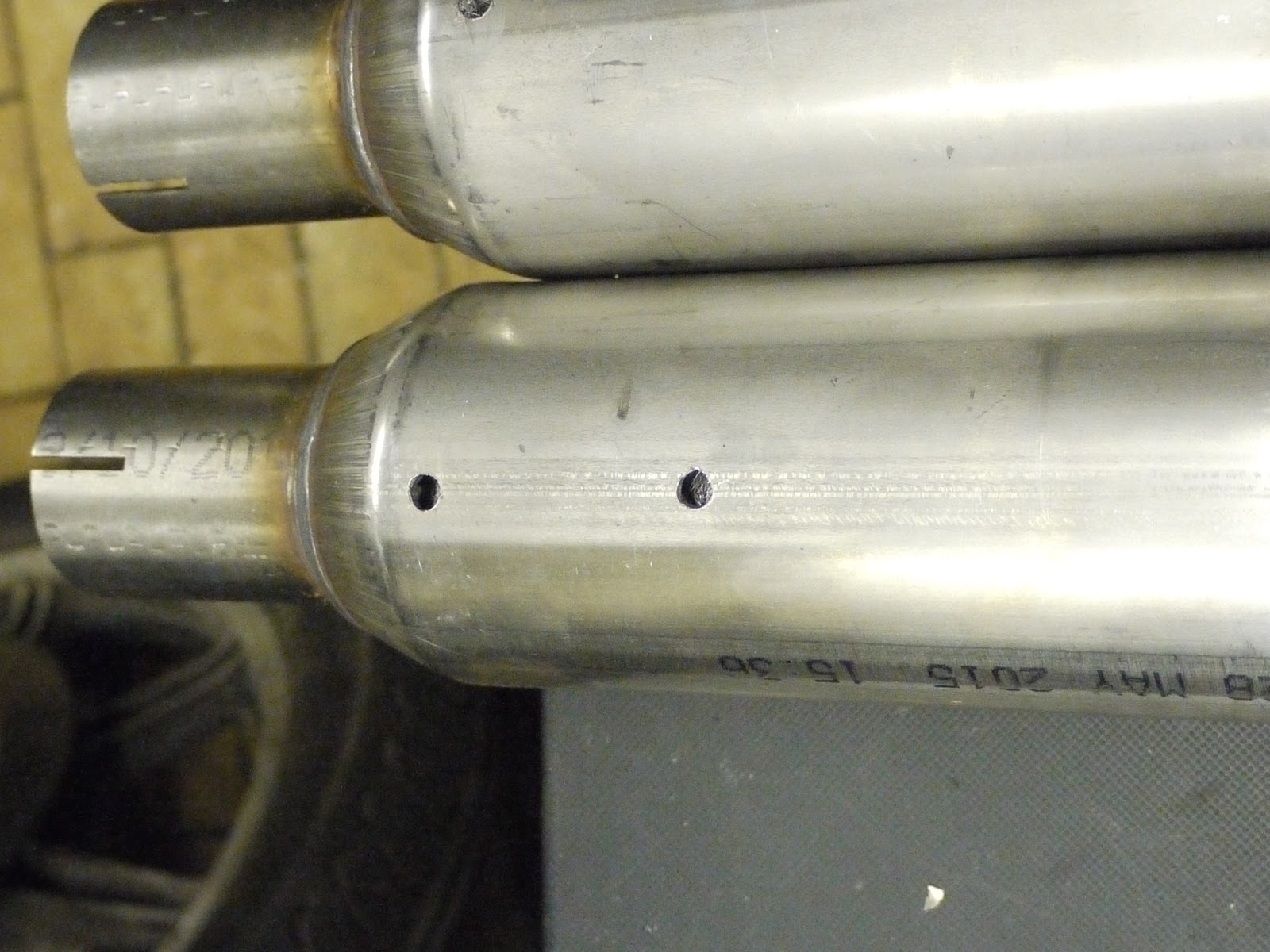 Step three: Have some nice hangers waterjet cut and hang your exhausts on them. 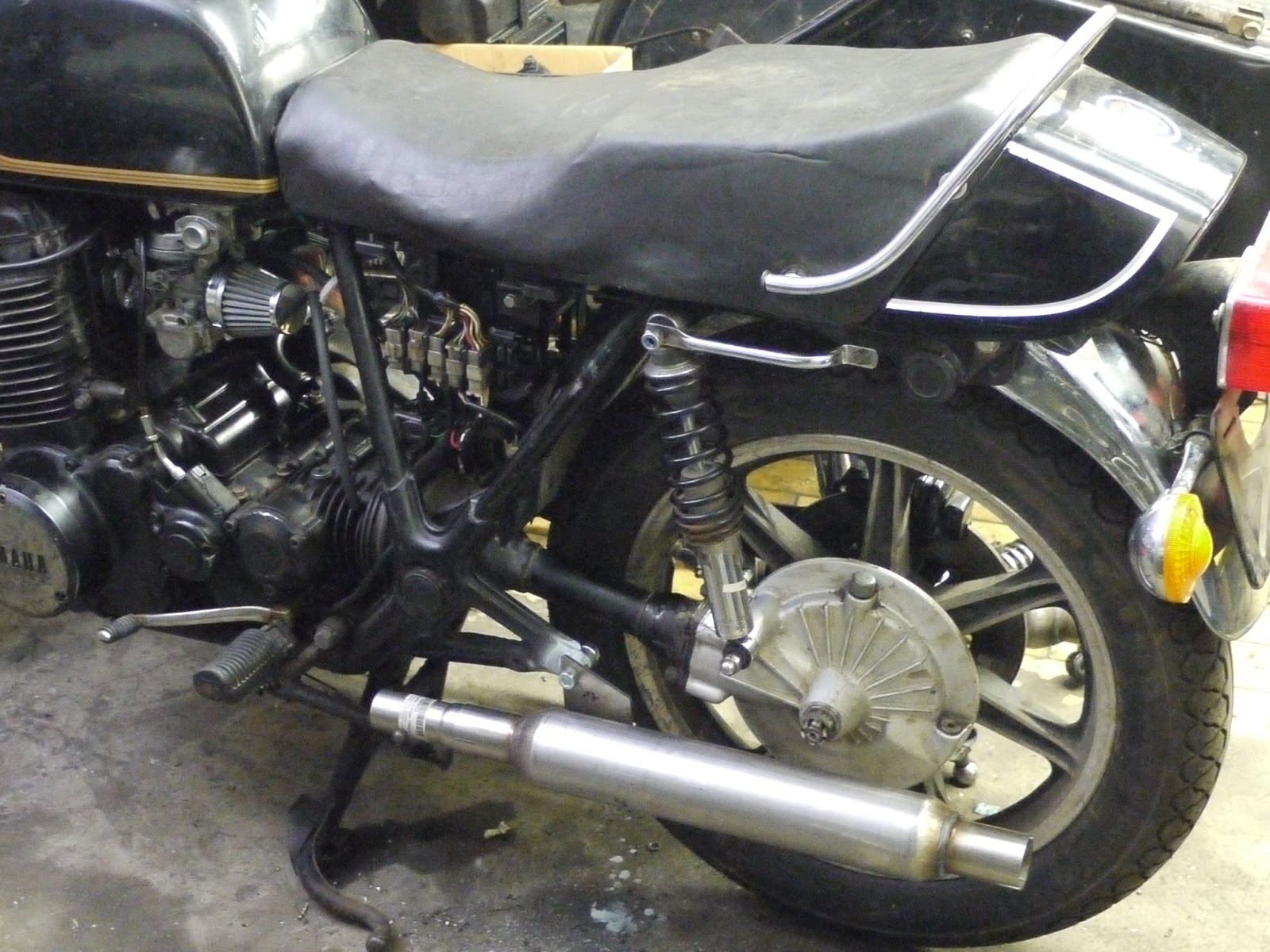 The next step required a lot more work, than what you see here. The spacing of the Triumph downpipes is spot-on perfect, but the flanges are drilled too narrow. So you have to file them out a lot. Once done, you're greeted with this: 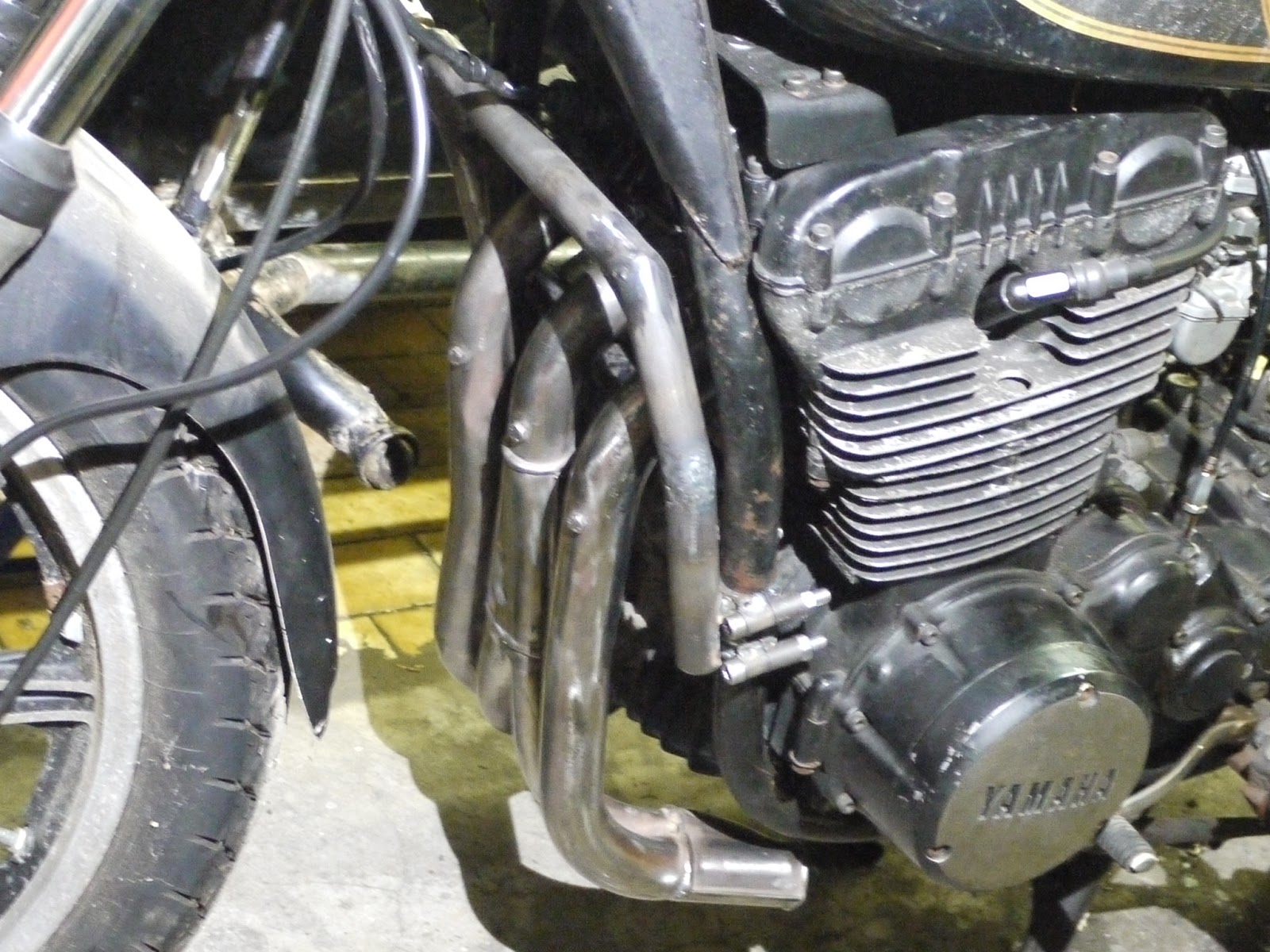 If you want to retain your sidestand, you have to cut off the original tubes right on the collectors and then build it from there. 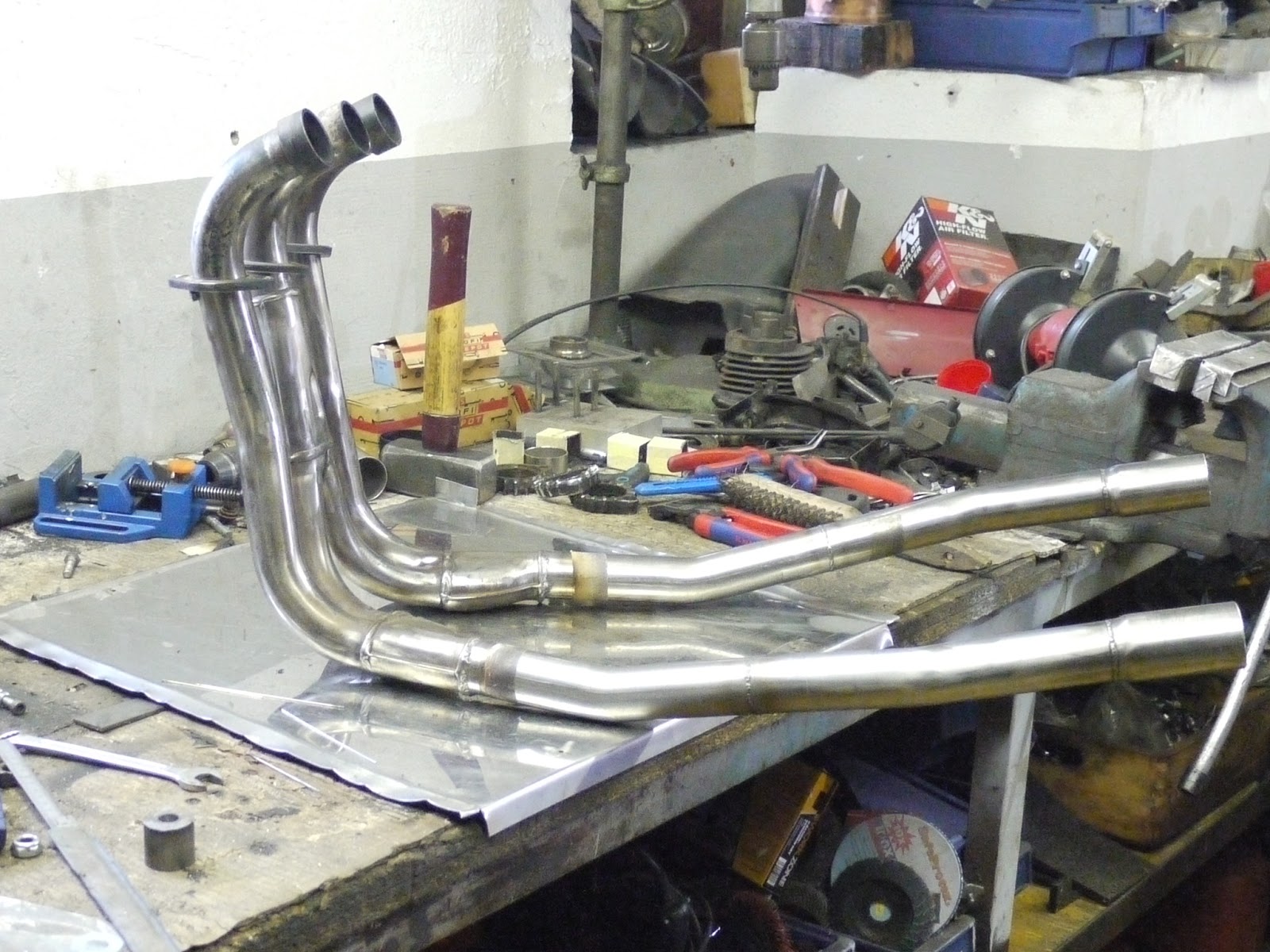 And if you measured thrice and cut only twice, you end up with something like this 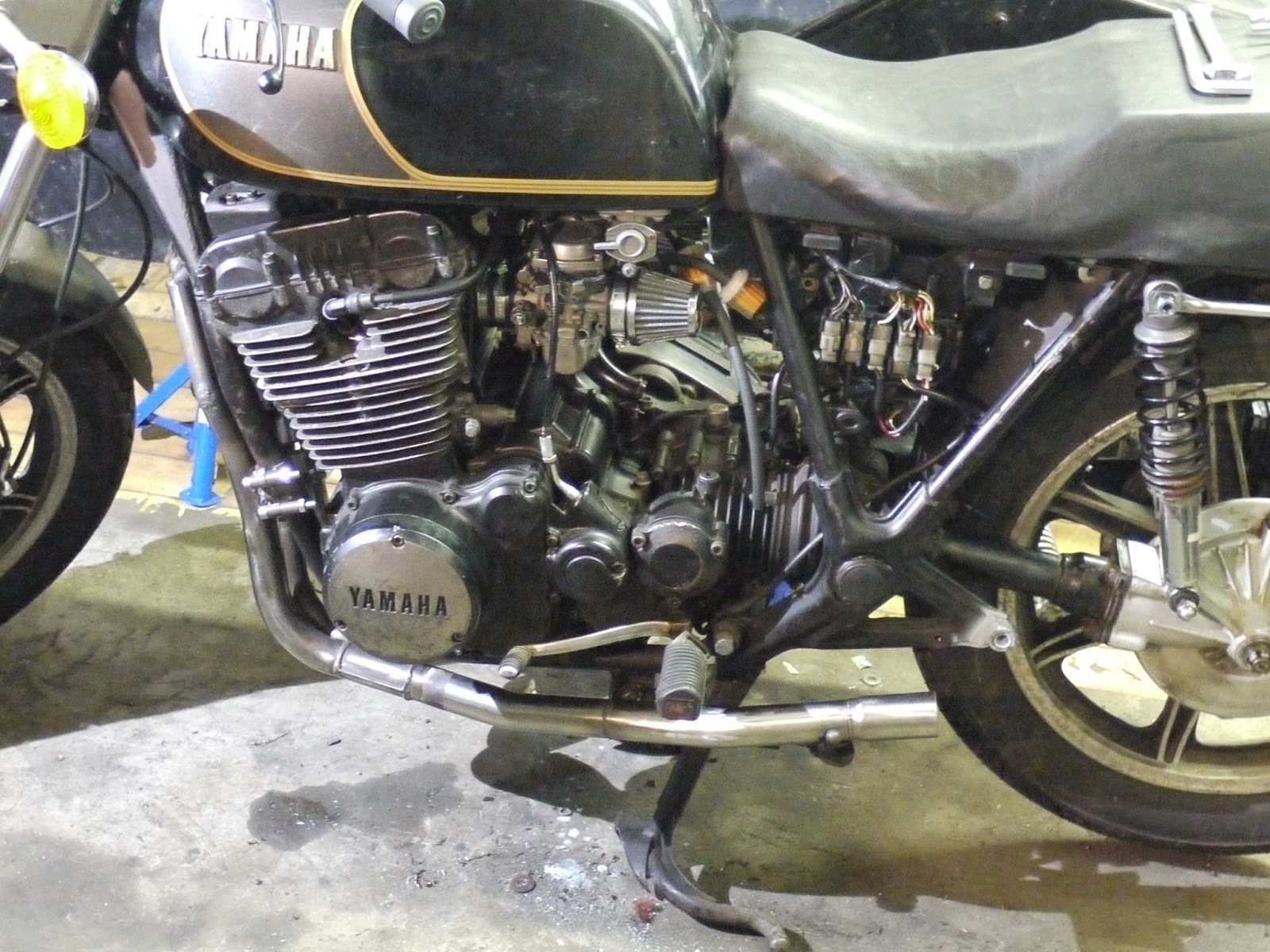 And in the end it'll look and something like this.

and a bit later in Spring, after fiddling with the carbs (and the whole bike) quite a bit more, it sounded like this:

As this is "DO the TON" it was amongst my goals to make this sidecar actually fast enough to crack the ton!

One of the little things I did was to swap out the engine for an 850cc one, but as this was a mighty unspectacular job, I'll leave this out. In the previous post I modified a Triumph exhaust to make sure the bike was able to "breath out" properly, nevertheless the stock CV carbs never were the stuff that really cut it for me.

So I got a set of VM36s and fitted those. The carb mouths are exactly the same as the stock Mikunis, but the roundslides are 2mm bigger in diameter, meaning that the engine will breath better not only because there's no butterfly-assembly in the middle of the airstream, but also because of the physically larger diameter of the carb orifice. 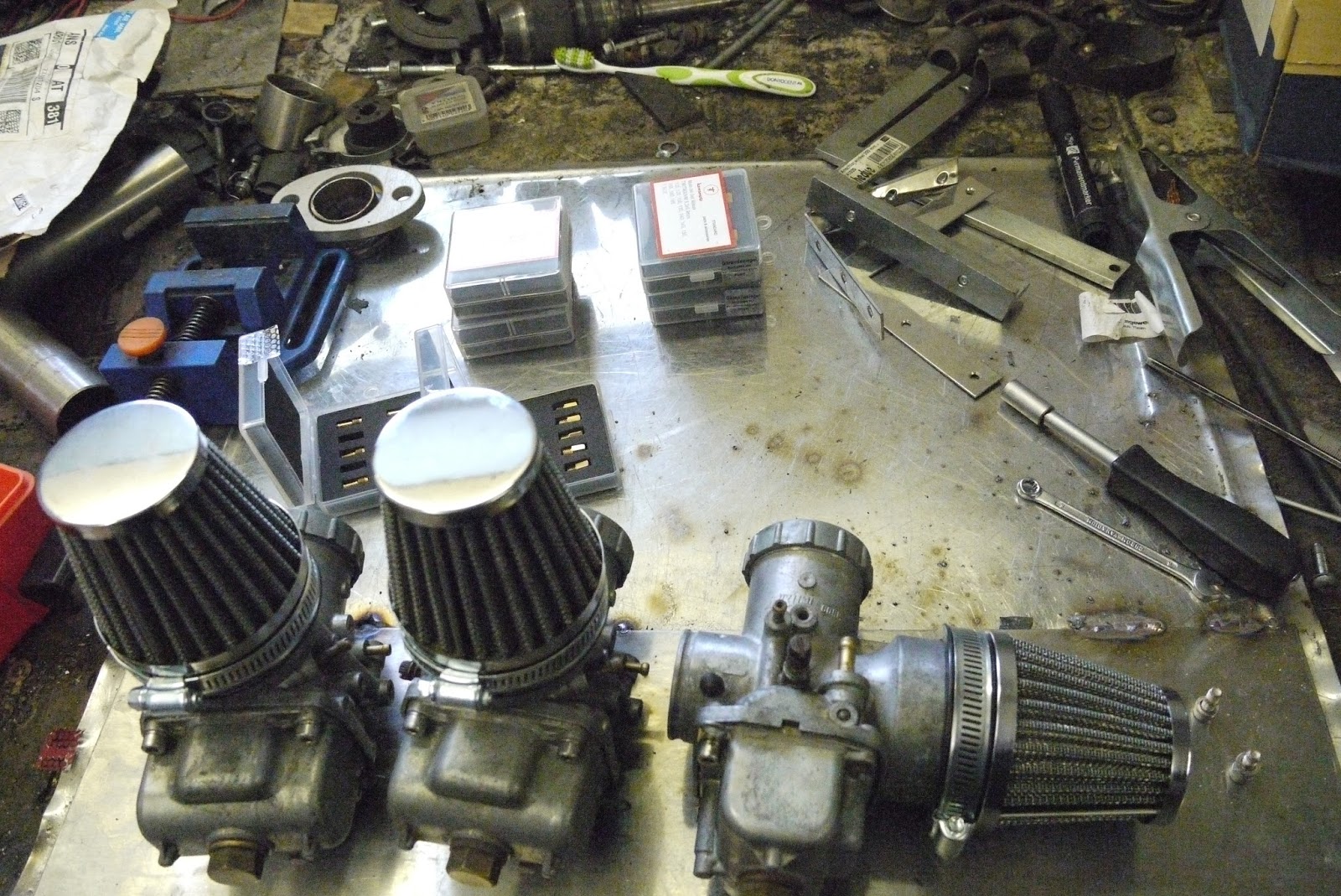 Installing them was MORE than just a tight squeeze, I made some breather tubes from silicone-hose and had to remove those later one, because the carbs were simply touching each other. 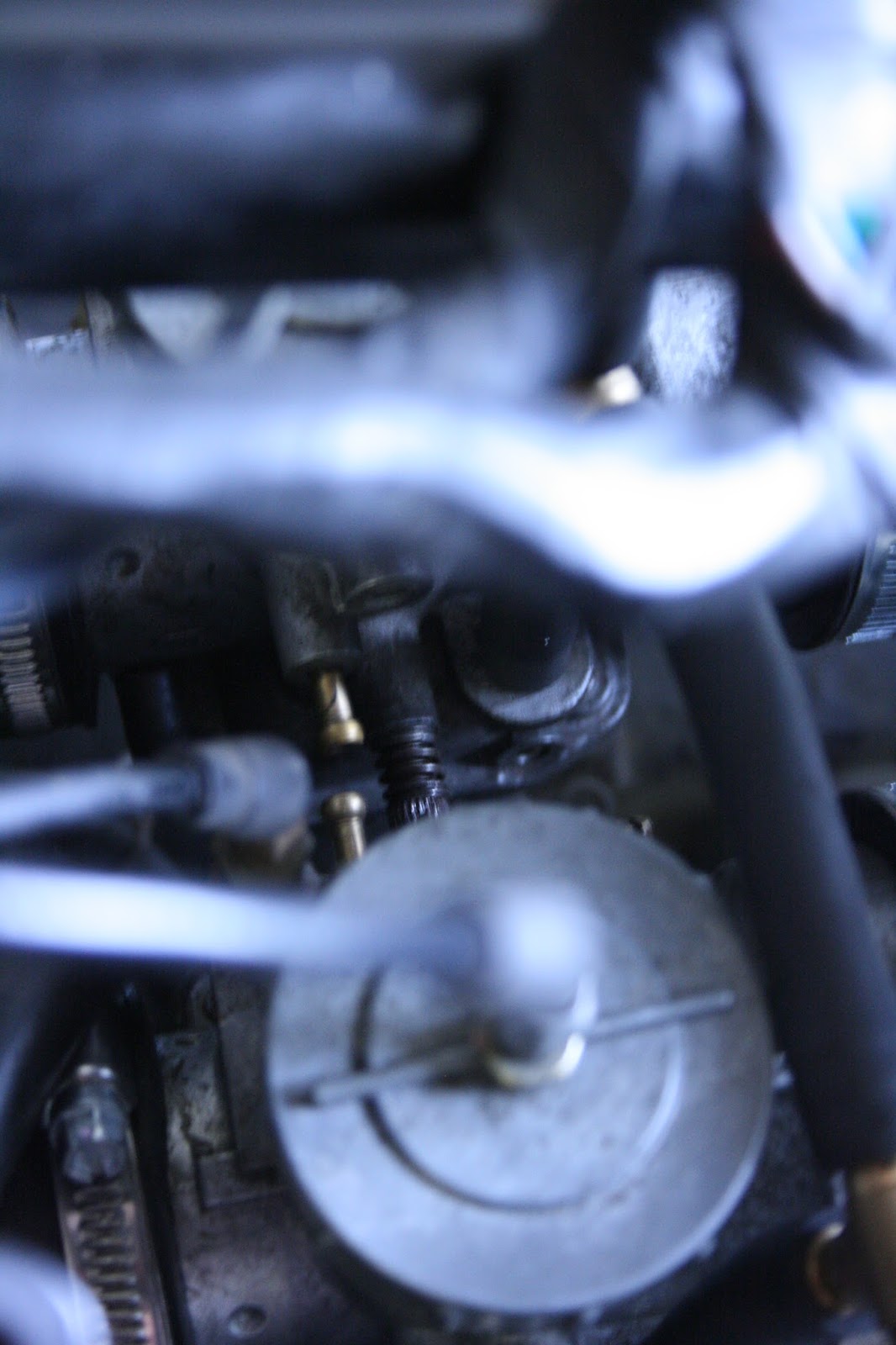 (as you can see, things are really tight)

But it definitely looks the business: 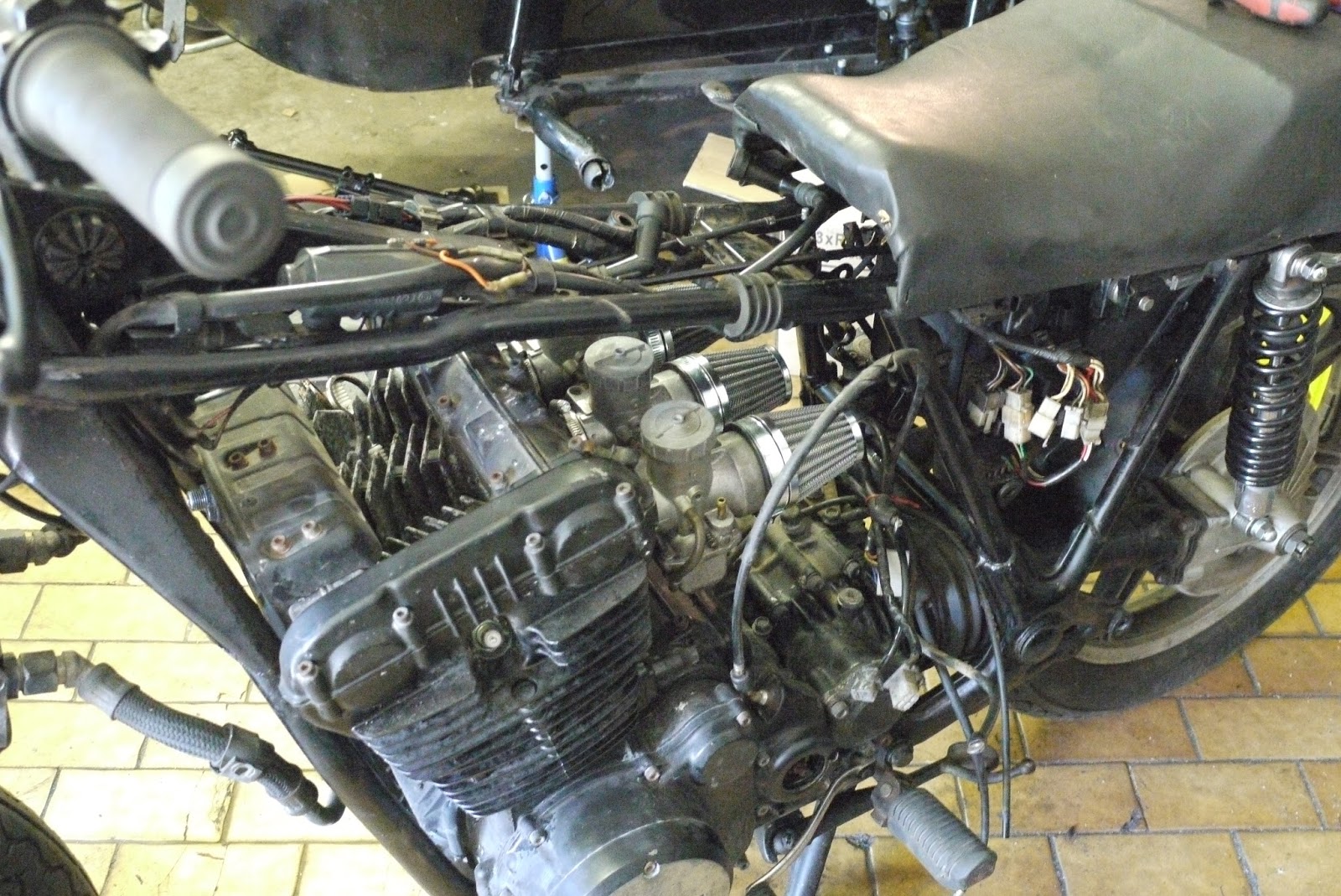 Funnily enough I never took a picture of how tight things are under the tank as I was only able to get a 4in1 cable-splitter AND you still have to route the cables at least semi-decently to reduce the amount of force required to get them to work.

With them installed it was time to sync them, first with the trusty drill method: and later on properly with vacuum gauges 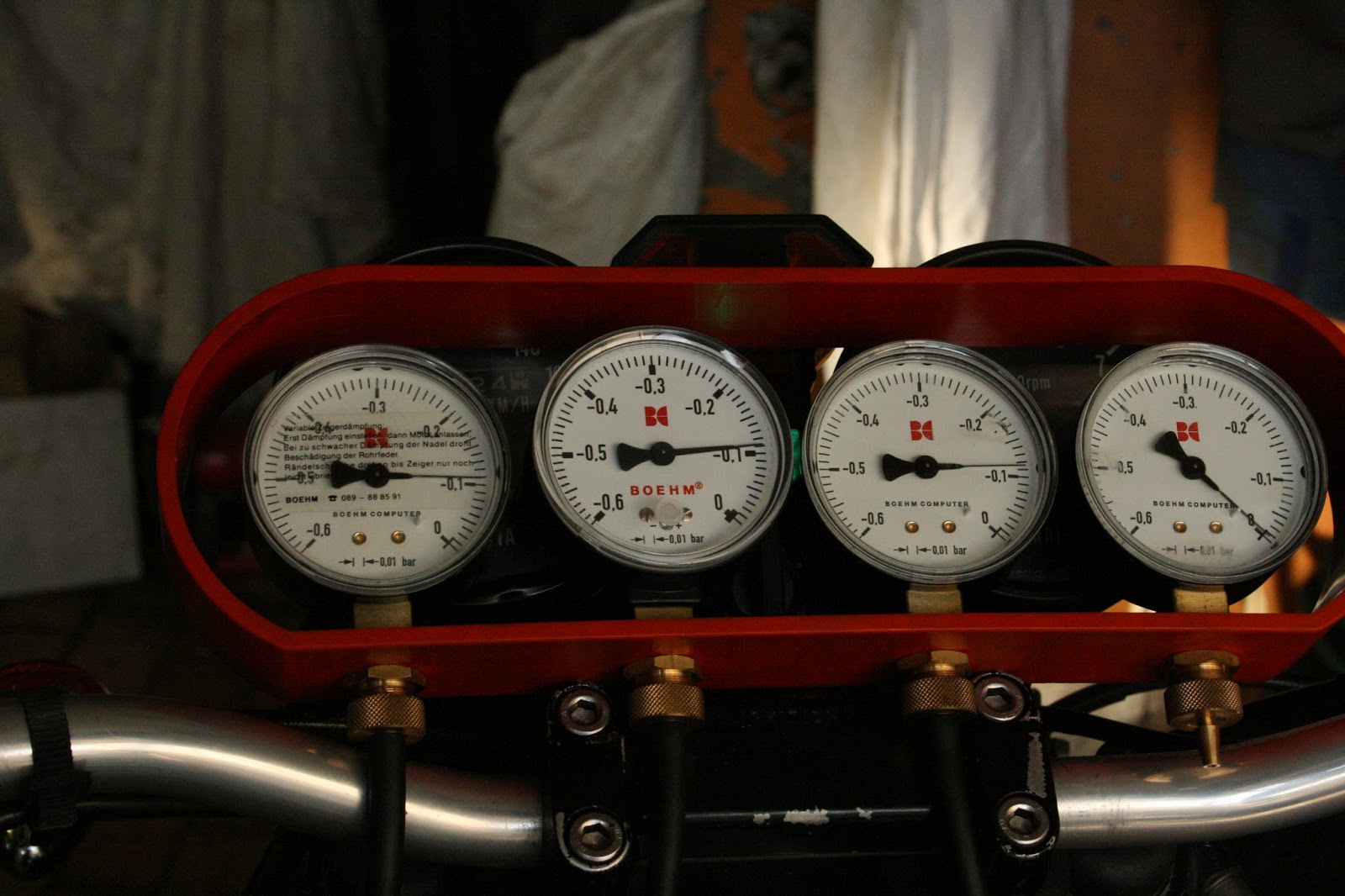 That sounds very untamed! Love it!

Sends shivers down my spine!

It does sound a lot more Porsche 911 RSR in real life though...

that's some nice work there (despite the fact that I hate sidecars with a passion akin to the everlasting pain in my right knee that was inflicted by one of satans own shopping carts) but why all the extra work to keep the sidestand? doesn't the zombie wheel perform that function adequately?


spotty said:
but why all the extra work to keep the sidestand? doesn't the zombie wheel perform that function adequately?
Click to expand...

It does so with great precision, but sometimes the sidecar has to be taken off. Mainly because the door to my workshop is too narrow to fit both through at once and in such cases the sidestand comes in quite handy.

And yes, the ratty place (thank f*ck) is back up again!


spotty said:
that's some nice work there (despite the fact that I hate sidecars with a passion akin to the everlasting pain in my right knee that was inflicted by one of satans own shopping carts) but why all the extra work to keep the sidestand? doesn't the zombie wheel perform that function adequately?

and isn't it nice to have a ratty place to go to again
Click to expand...

+1 on the side car. Bike sounds sensational and thank god you can ditch the anchor when it suits.

If I'm allowed, I'll give you some nuances ...
This side car has 4 points of attachment to the frame of the motorcycle (photo). 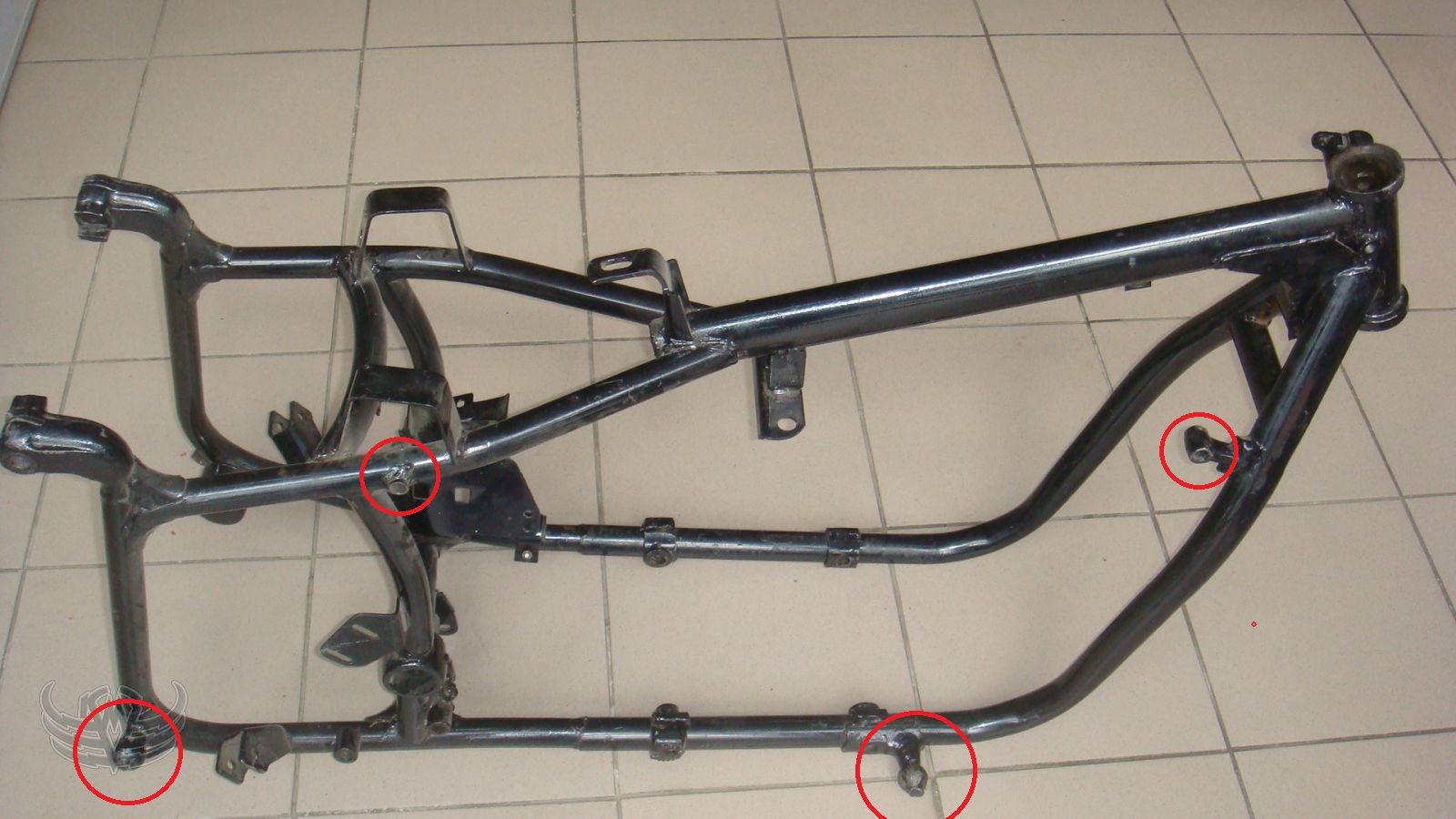 2 lower collet chambers and 2 upper bracing rods.
It is enough to weld such fastenings to your frame, observing the dimensions - the side car will become without additional efforts. 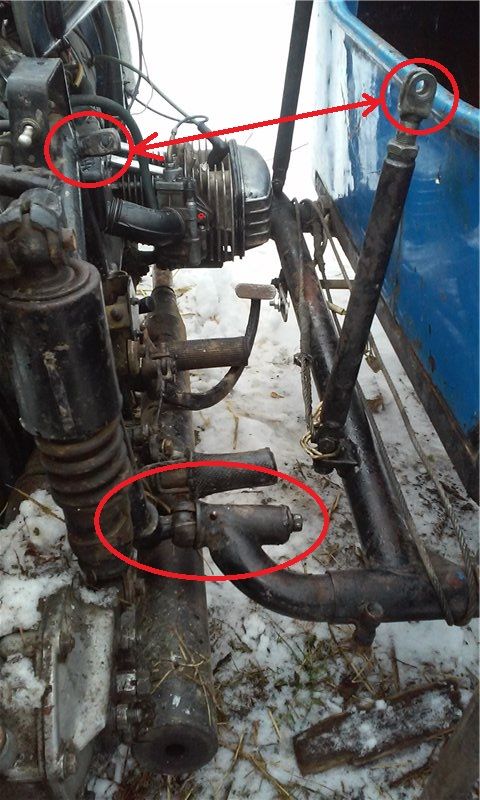 It should also be known that the stroller should be adjusted in relation to the motocycle, as in the photo (convergence in millimeters)

This is to ensure that the side car does not take you away from a straight trajectory, and you constantly do not make any effort on the steering
How to do it practically, look at the link (the text in Russian, but you can understand everything from the photo) - http://forum.motoroad.ru/topic4347-regulirovka-kolyaski-na-mot-ural.html

It is perfectly fine in a Russian sidecar, indeed. But I had this like that on my previous XS750 frame and it broke the frame. Oh and secondly it is not allowed to weld parts onto the frame overhere and lastly the XS750 has got more than twice the horsepower... 8)


der_nanno said:
It is perfectly fine in a Russian sidecar, indeed. But I had this like that on my previous XS750 frame and it broke the frame. Oh and secondly it is not allowed to weld parts onto the frame overhere and lastly the XS750 has got more than twice the horsepower... 8)
Click to expand...

...The Dnieper frame is made of a pipe with a diameter of 30 mm and a wall thickness of 3 mm. )))
And yet - your side car from the motorcycle "Dnepr" - made in Kiev at the KMZ factory. It is Ukraine.


fantom.ac said:
...The Dnieper frame is made of a pipe with a diameter of 30 mm and a wall thickness of 3 mm.
Click to expand... The Ural, Dnieper and Chang Jiang CJ750 all stemmed from the BMW bike developed just after WW1. The history is summarized here http://www.changjiangsidecar.com/Sidecar_History.html
I had a Chang OHV model, nothing modern or light weight. It was basically a military transport. I sold my Chang and bought my first XS750.
Very happy that Nanno is not welding the XS frame, as it means it is totally reversible.

I've been a good boy this weekend and worked a lot on the kind of stuff I am least into: Cosmetics. Luckily there also was some wiring to do so it was completely wasted time.

That being said, I have to build some muffler tips to quiet her down a bit, but apart from making the front mudguard fit (it was a freebie and less banged up than what was on there before...) and some other bits 'n' bobs this is what she looks like right now and hopefully will pass DVLA-approval (it's a complicated process overhere...) 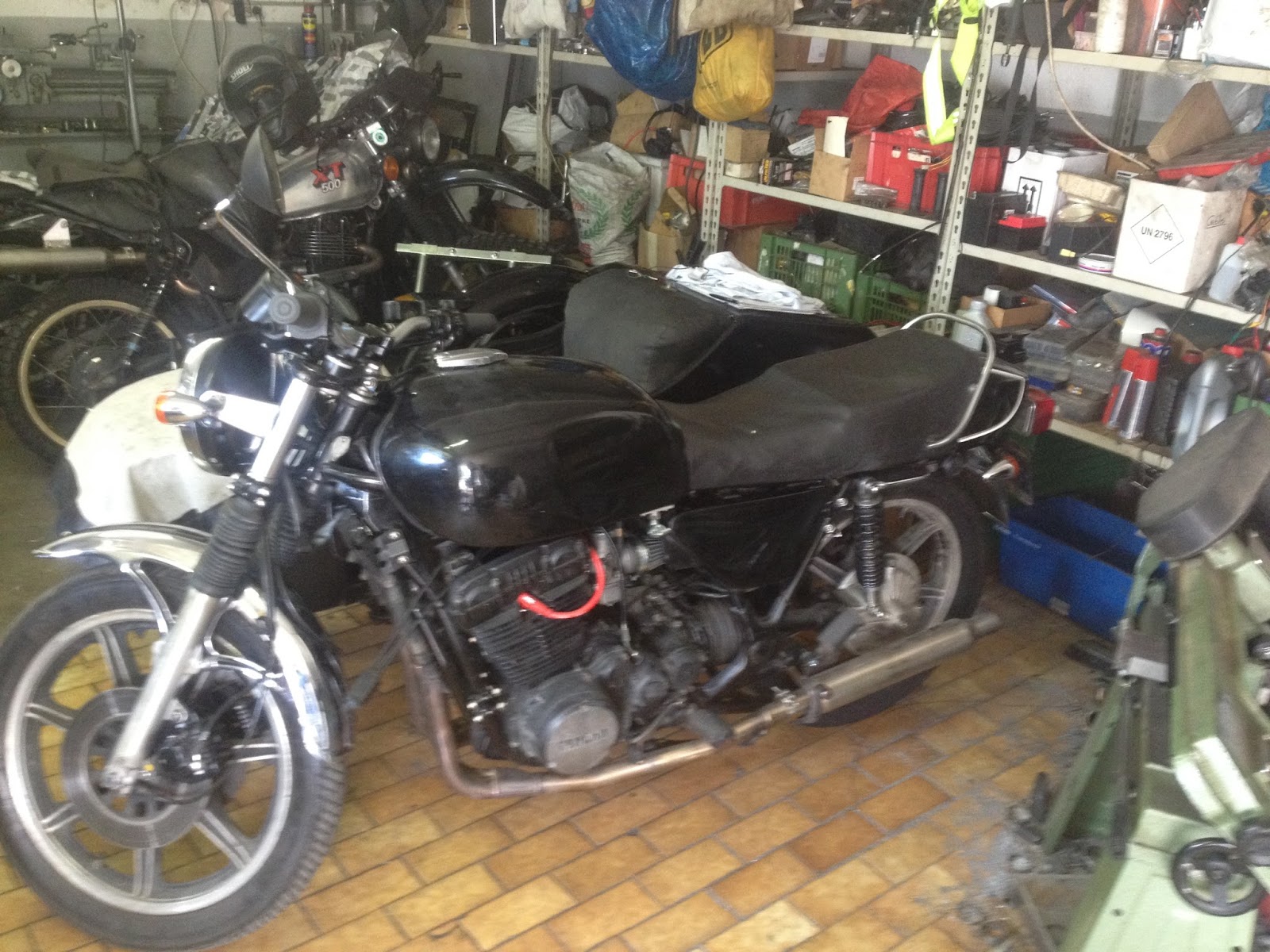 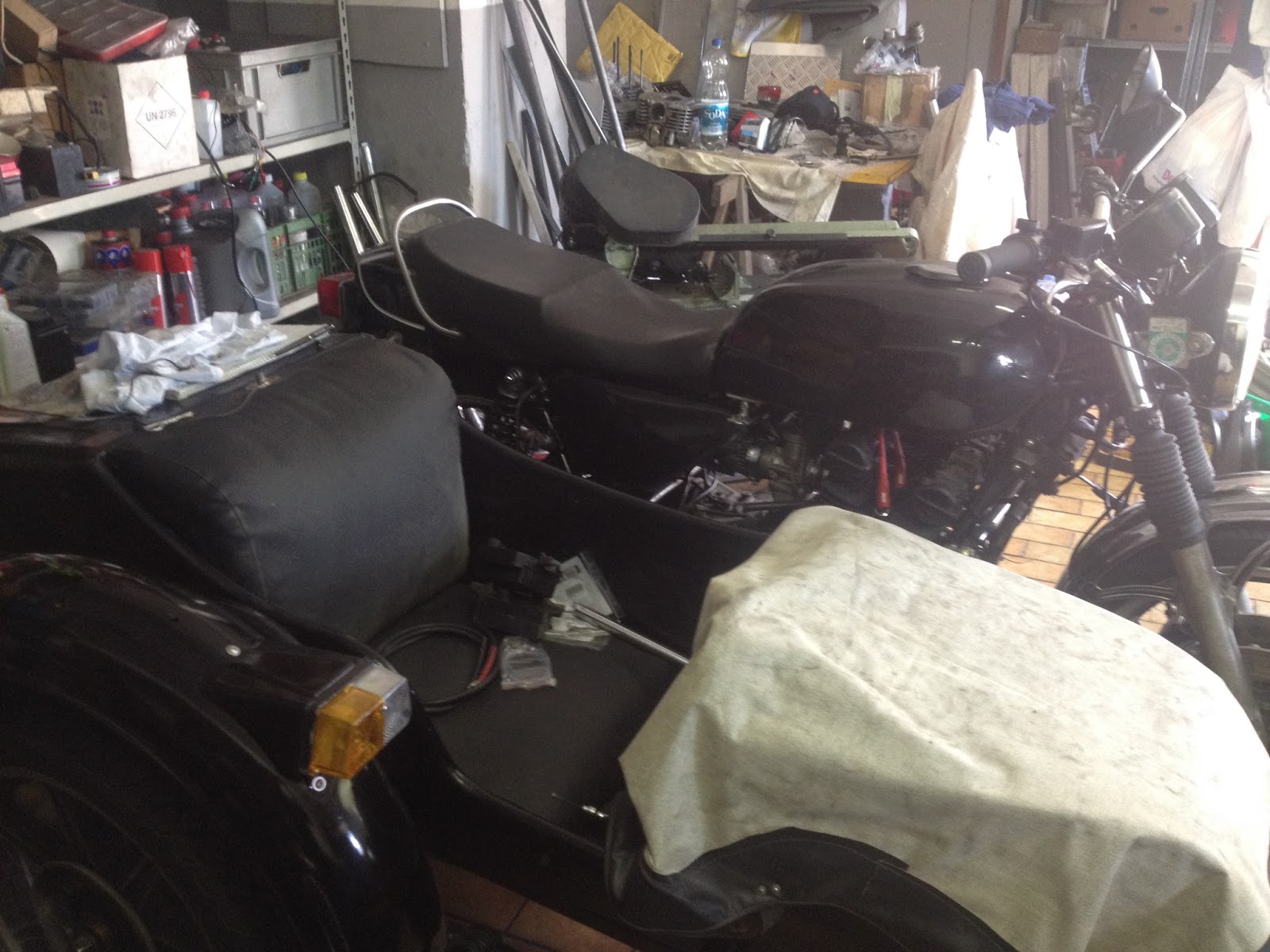 Btw. now you also have seen almost my entire workshop except for the workbench - yes it's a bit tight in there ;-)

Here's the link to the blog for more pictures 'n' stuff! 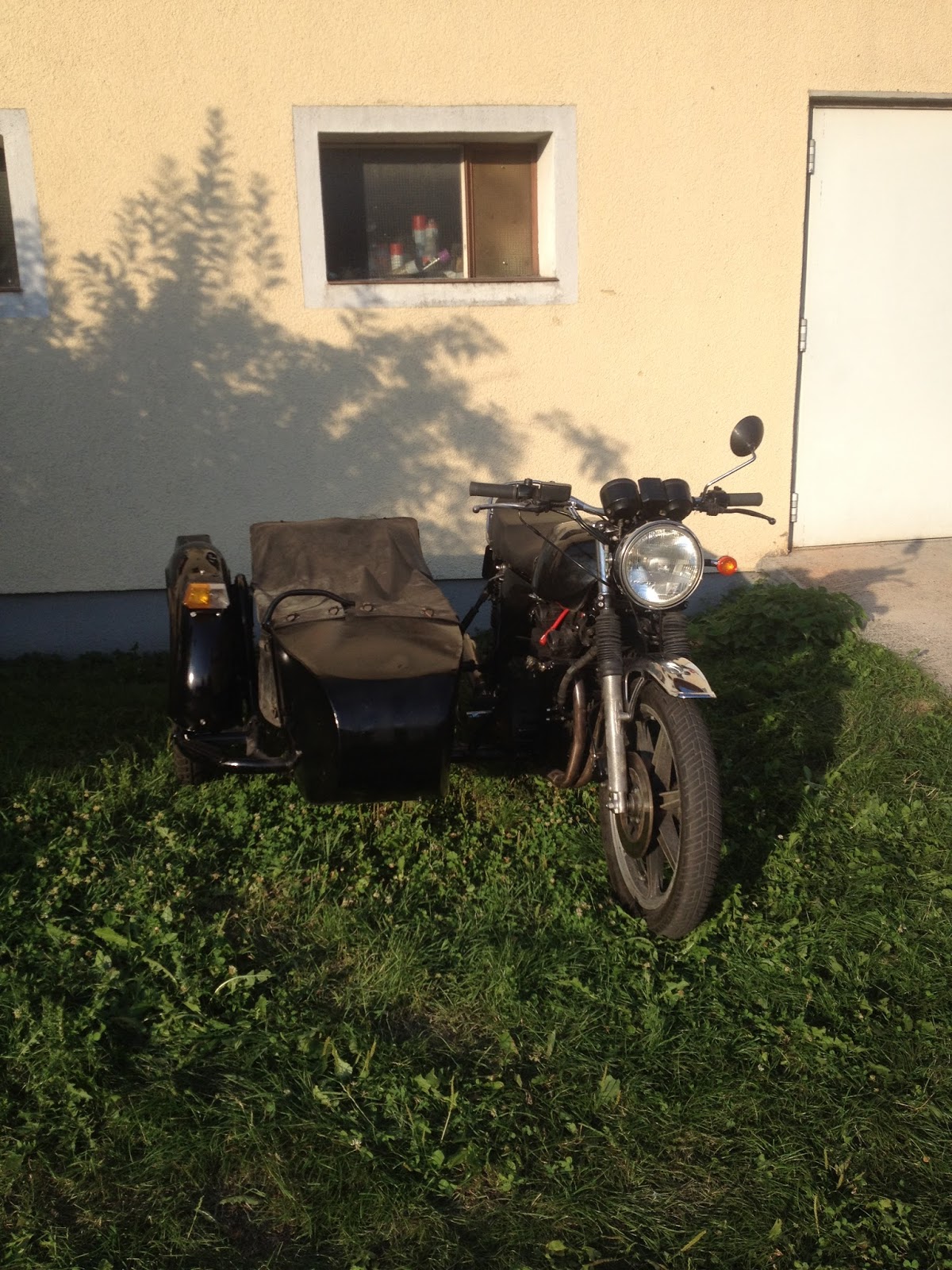 The first hurdle of the registration process has been taken yesterday. Some minor changes were requested like e.g. a steering damper, but everything else was deemed to fulfill the legal obligations for a single vehicle approval. I guess, I'll be riding around on this (officially) in about 3 weeks.

Well done. When will it crack the ton?