Yup... taking on a beautiful colour... New pipes are in the pipeline for Spring, but they will mandate a modification to the rear subframe and that would all potentially get me into some trouble with my time-management.

Well about time to get the old girl ready for the first snow... (it's already 0 degrees Celsius overhere in the mornings) 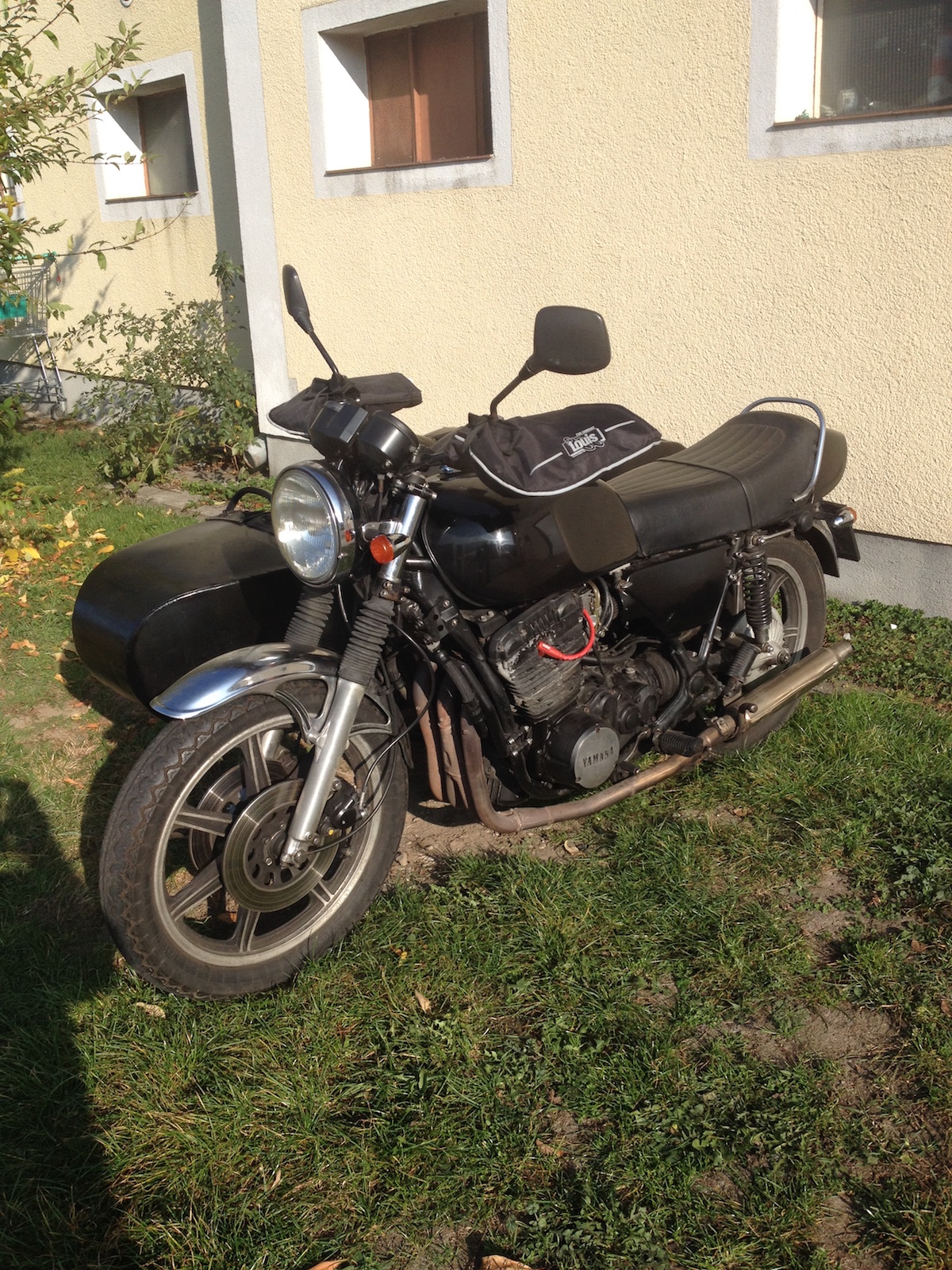 Bit more on the blog: https://greasygreg.blogspot.com/2018/11/the-xs-triple-sidecar-winter-prep.html


der_nanno said:
Yup... taking on a beautiful colour... New pipes are in the pipeline for Spring, but they will mandate a modification to the rear subframe and that would all potentially get me into some trouble with my time-management.
Click to expand...

New pipes now that you've taken all the weld tensions out?

Have them chromed instead?

Nah, the header section is just really low-quality stainless and I want to play around with different exhaust pipe diameters while I am at it. But yes, the current ones are definitely stress-relieved now. 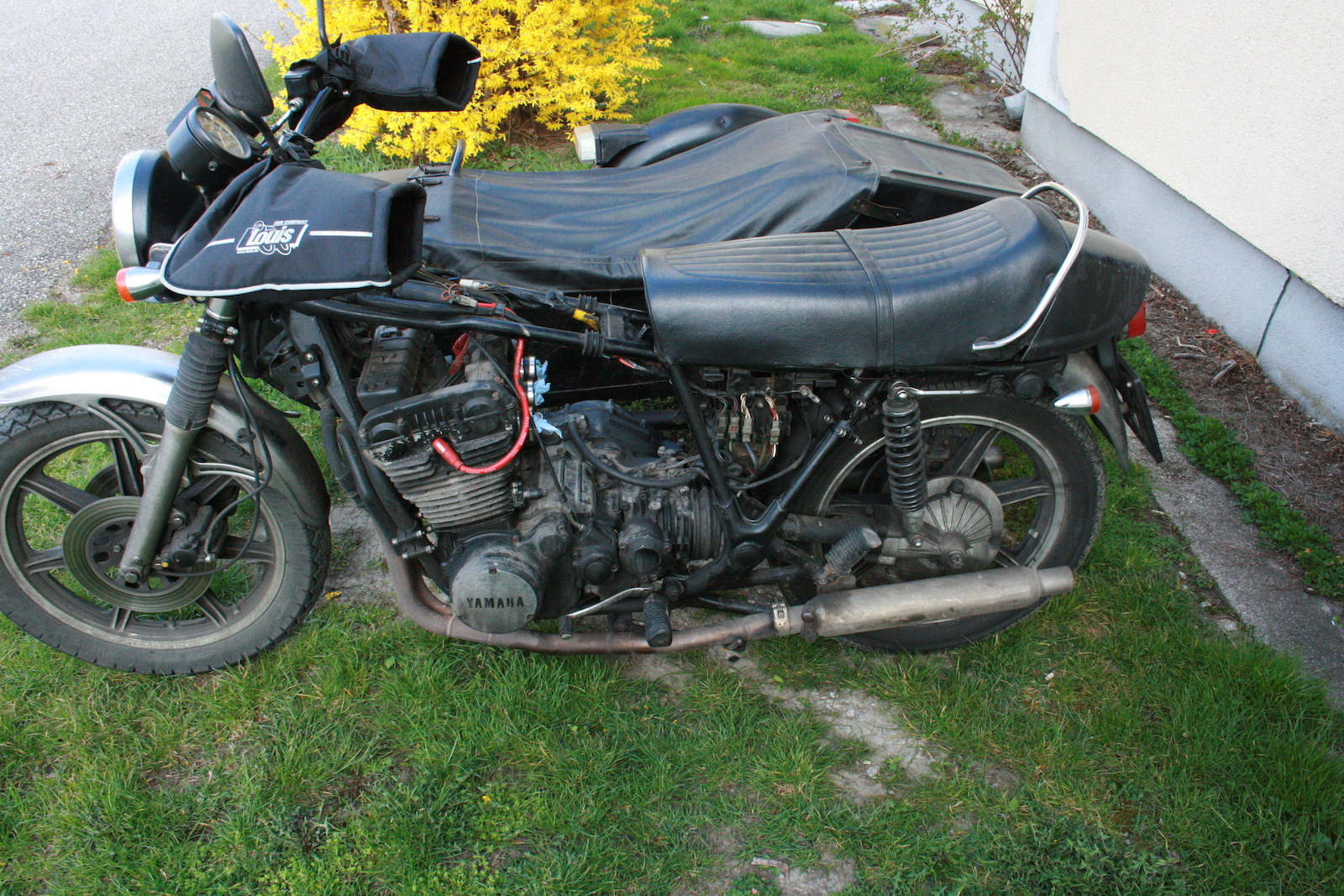 First on the list was some electrical problems, which originally started with a burned out alternator and shortly after the reg/rect unit gave in and only worked on first two and then a single phase, which made it weirdly difficult to troubleshoot as the voltage was going up, but it didn't really push out a lot of current.

As I wanted to fix this as quickly as possible, I picked up a very cheap r/r unit, which had a burnt plug. (I also ordered a new one from China, to have a good spare for the future.) After a quick test on the bike it proved to be working, so next was to replace the molten 6-pin connector. Unfortunately this isn't anything unusual, normally coming from a combination of dirty connectors, which are loose on their counterparts. 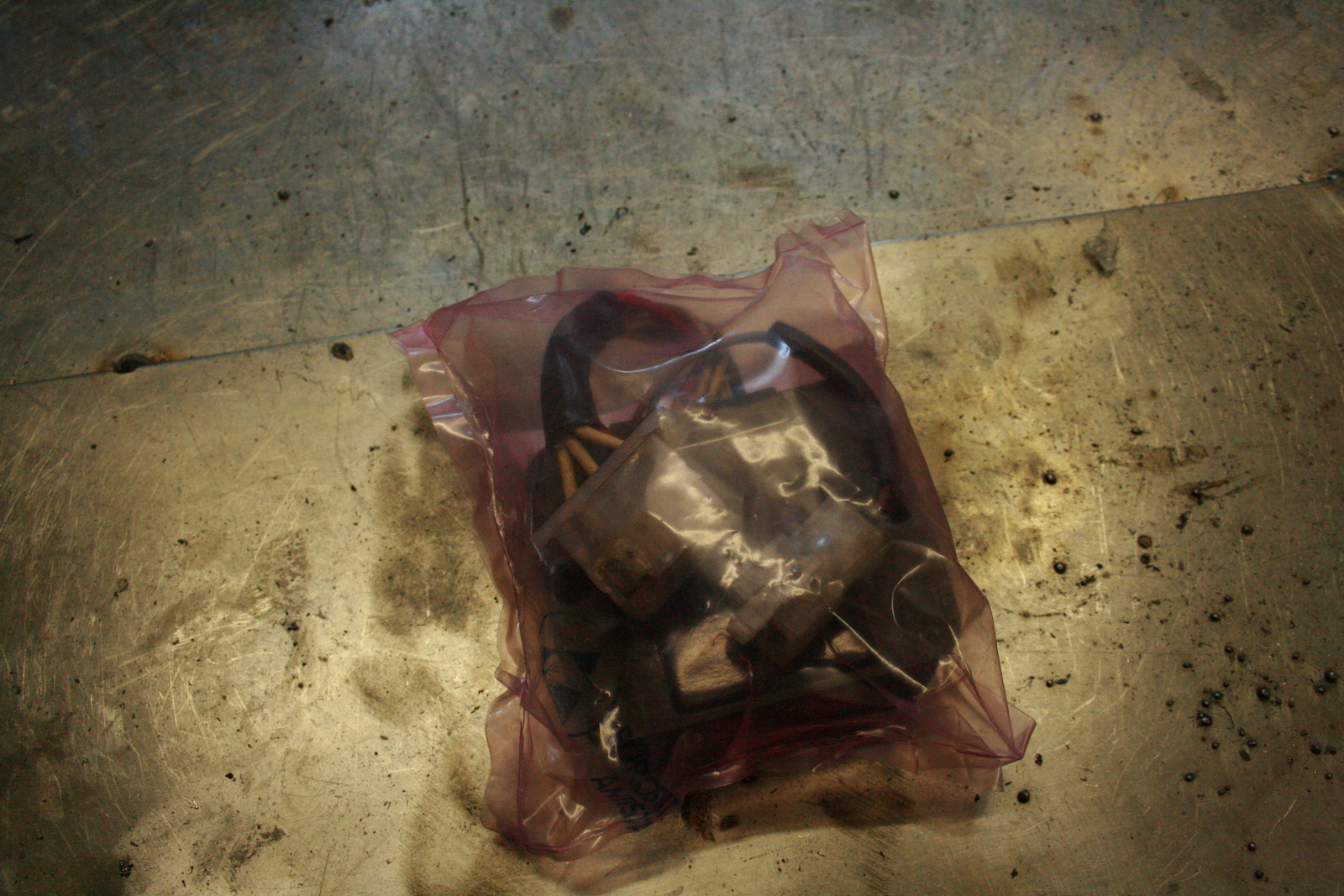 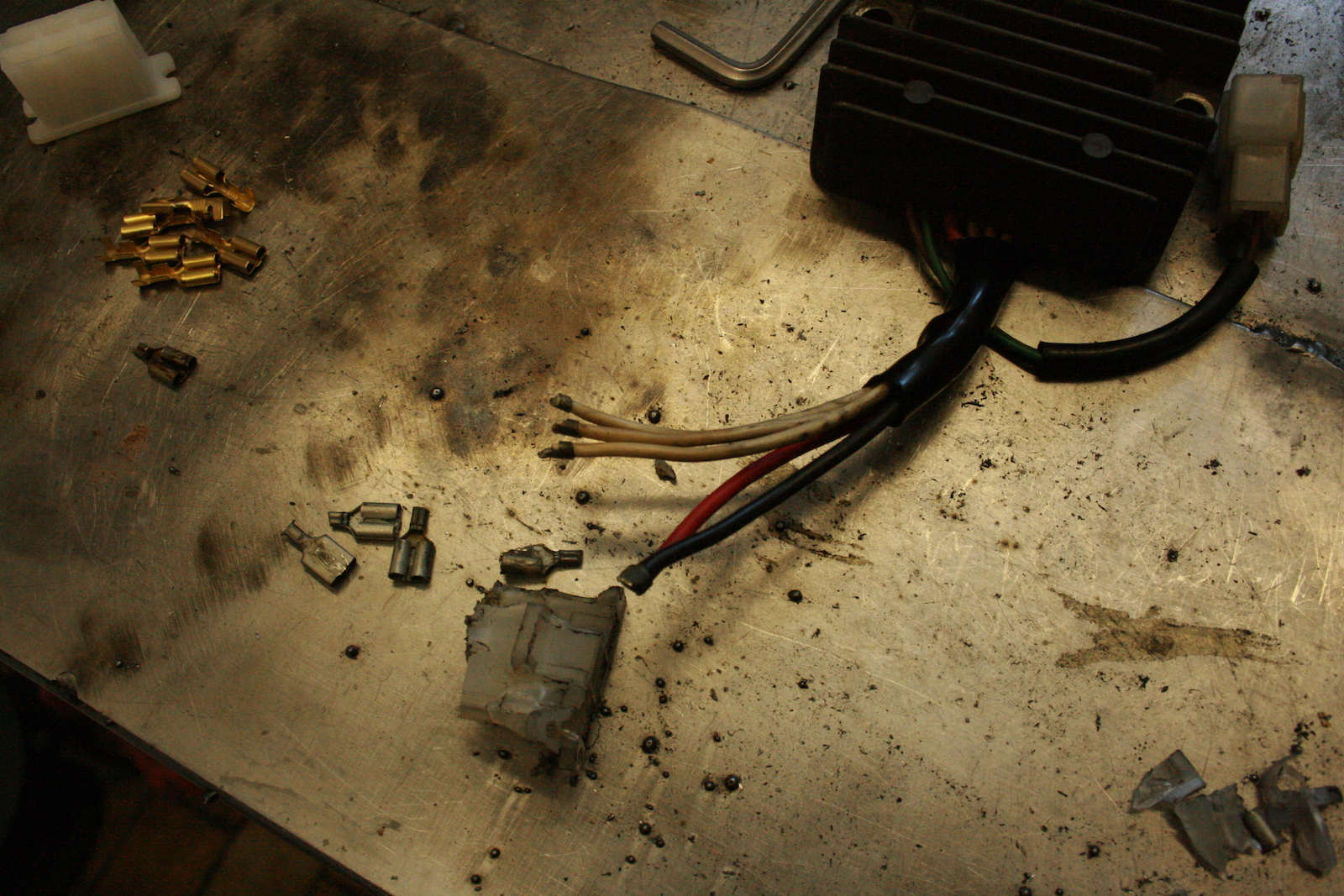 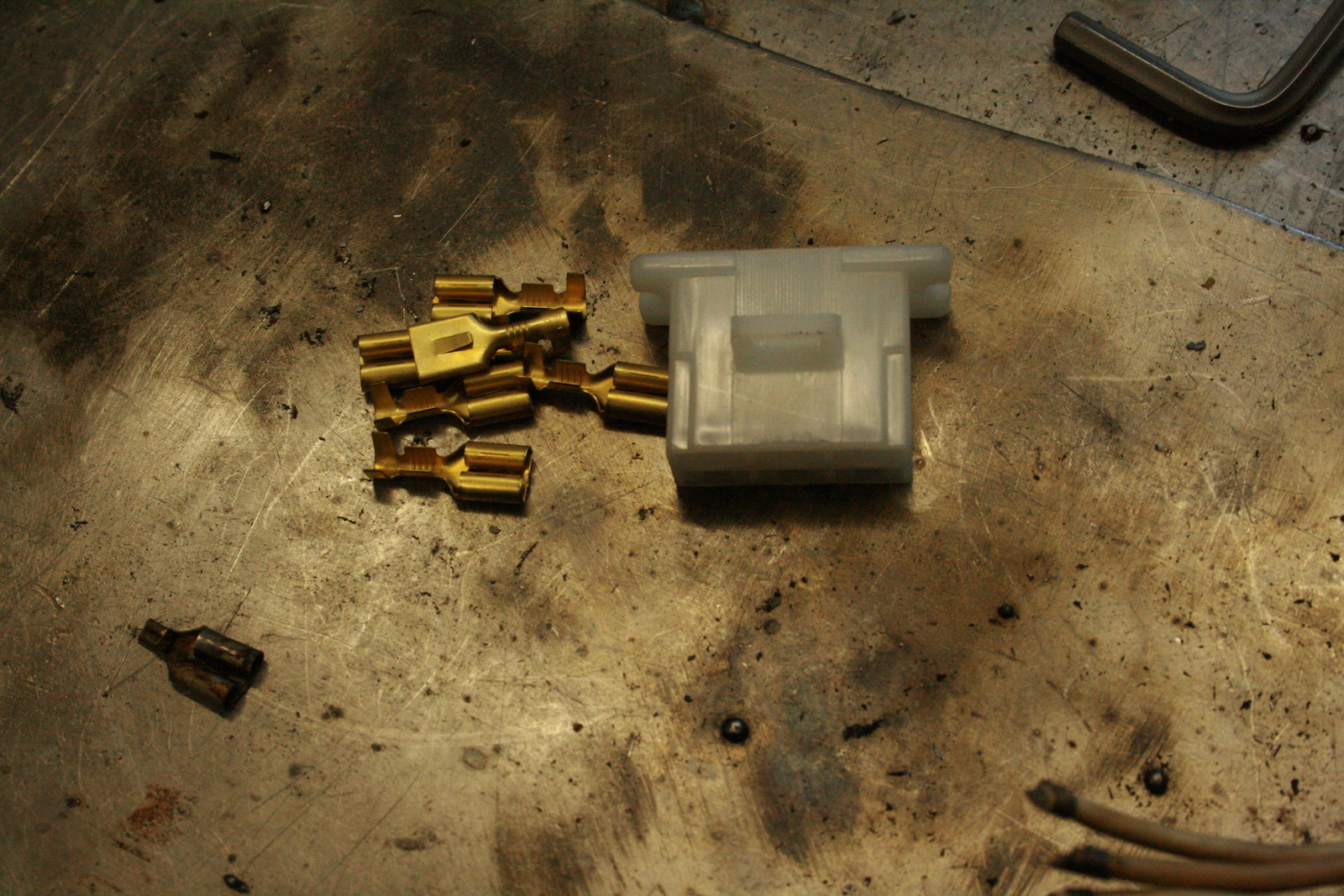 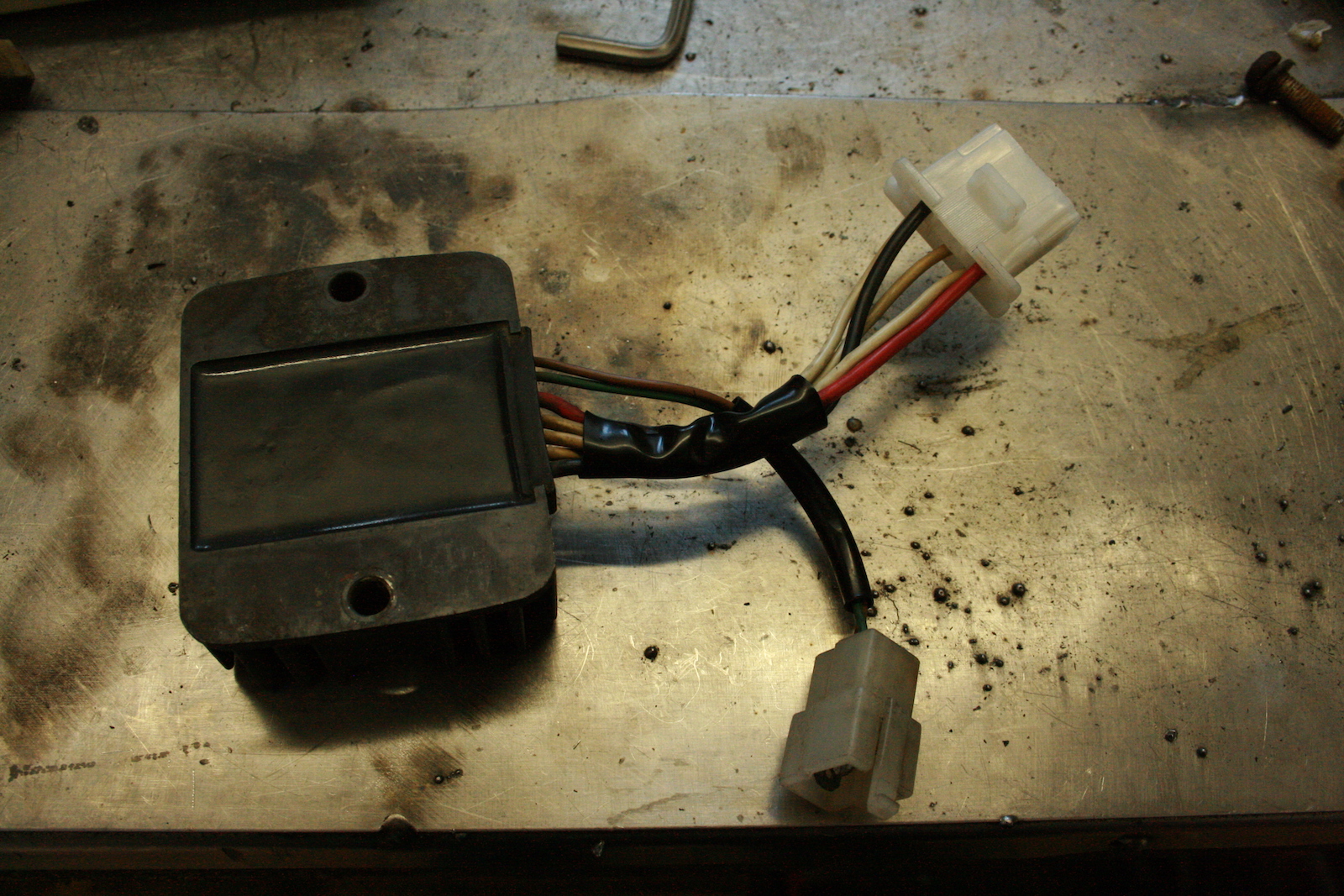 The thing that I somewhat worried the most about, was the fact that the r/r unit sits on the bottom of the battery tray, which not only is a lot of work to get to, I was absolutely sure nobody had touch those bolts in QUITE a few years. 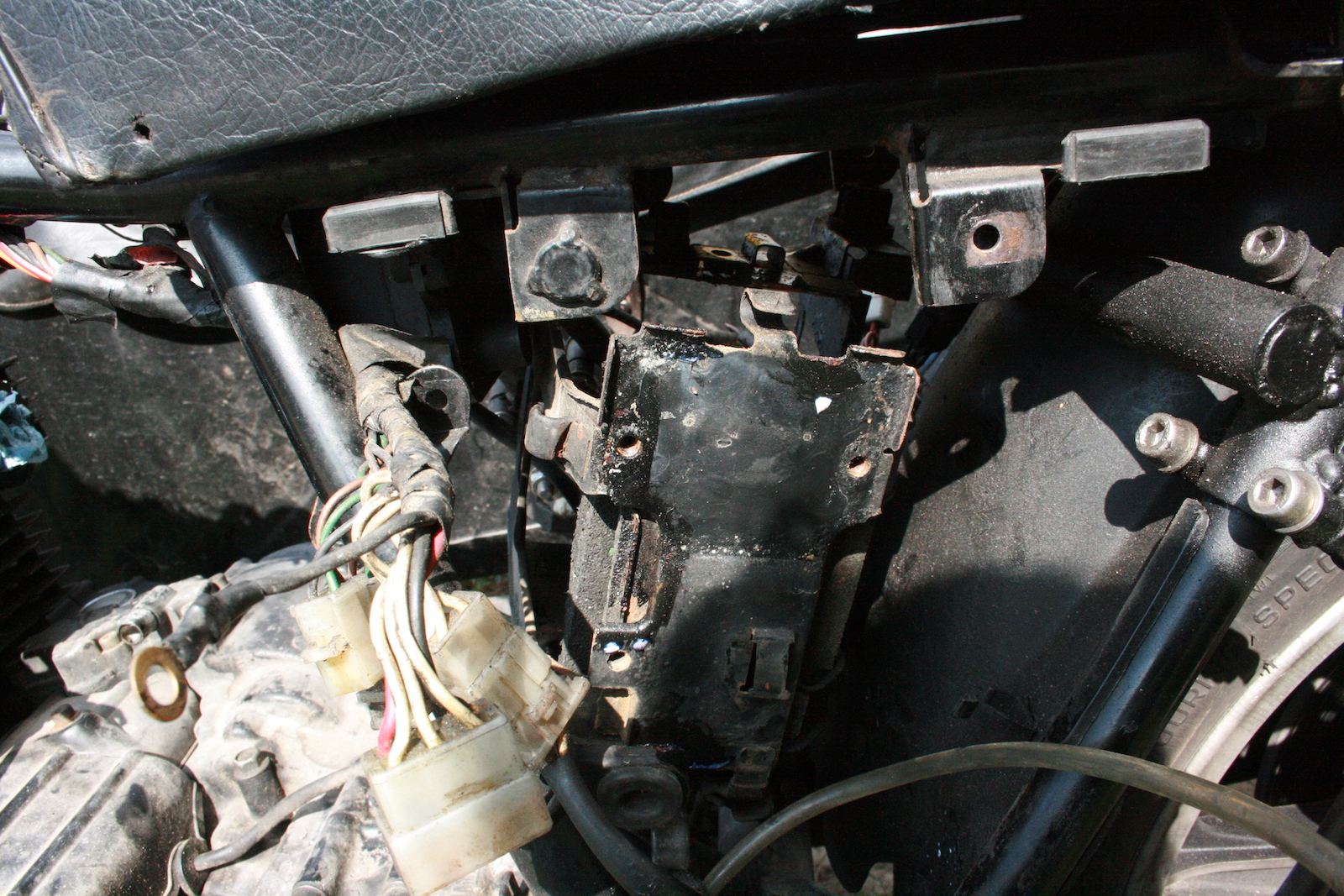 To my great surprise they came out fairly easily and after a few rust-touch ups everything went together. 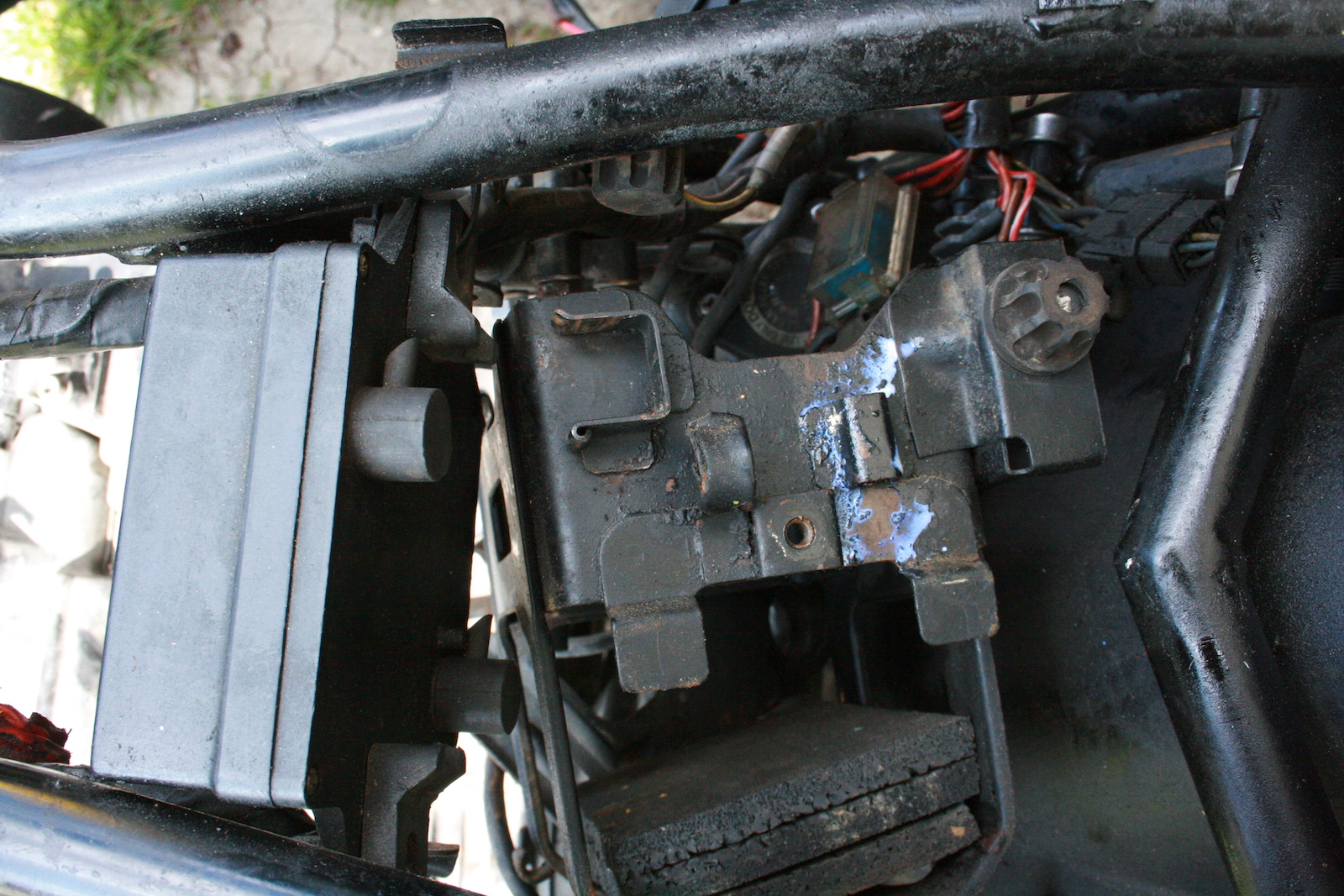 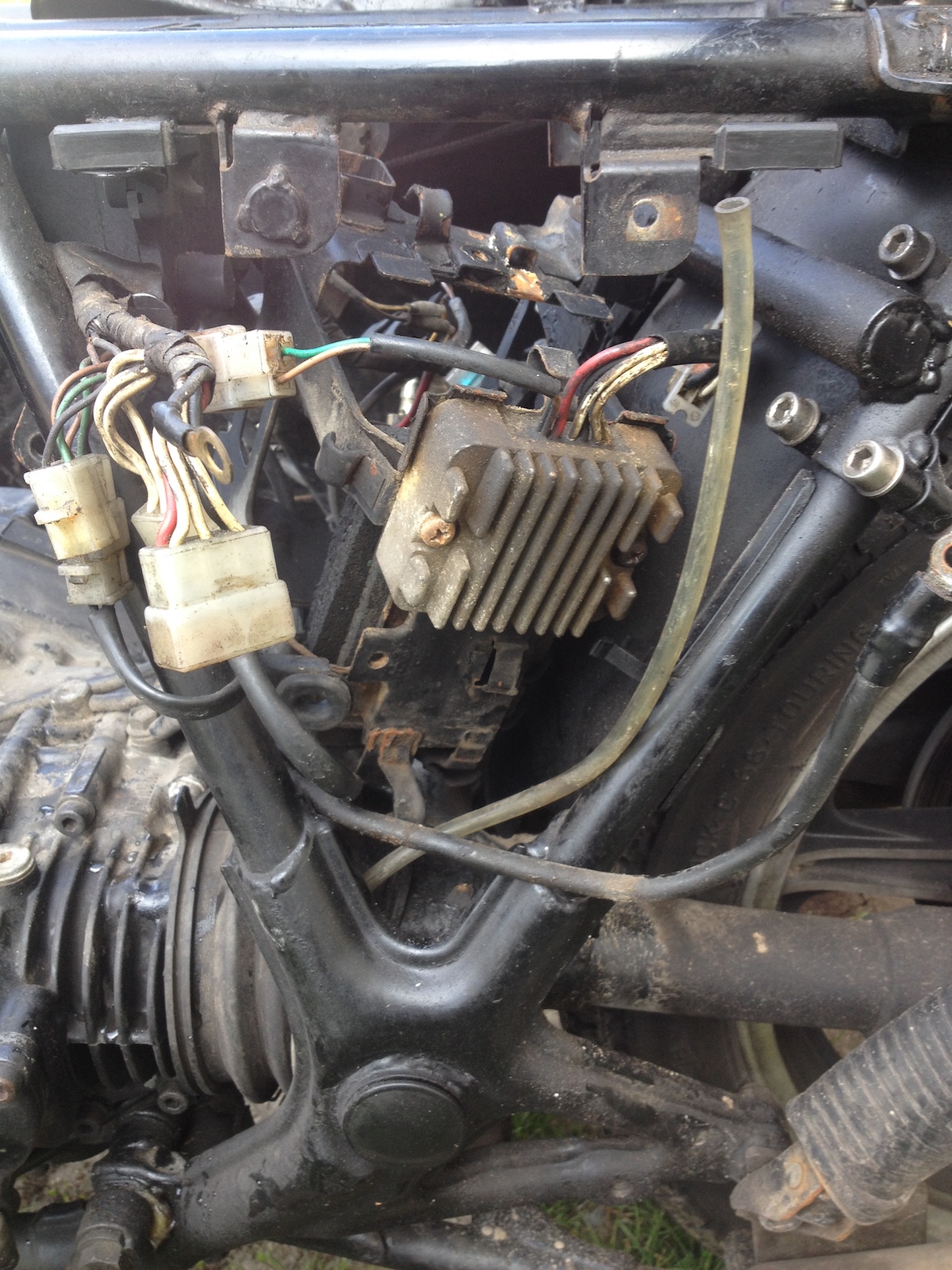 And then finally, the bike is charging as it should, pumping out a healthy 14V at idle into a rather empty battery. From here onwards the charging side of things hasn't given me any more headache since Spring (yet). 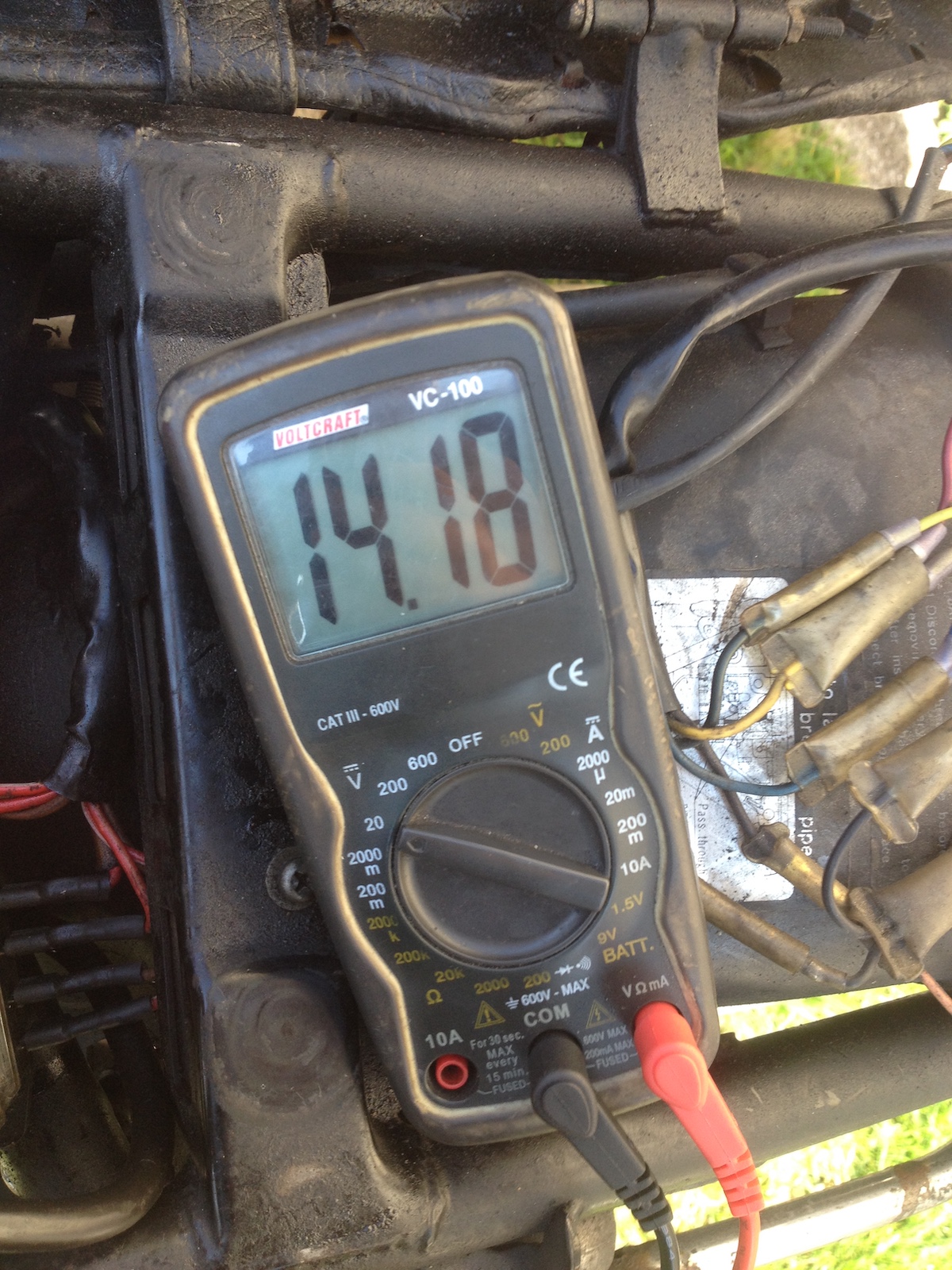 Next step was to clean off the protective grease and get her ready for the annual road-worthyness inspection. And a dirty girl she was. 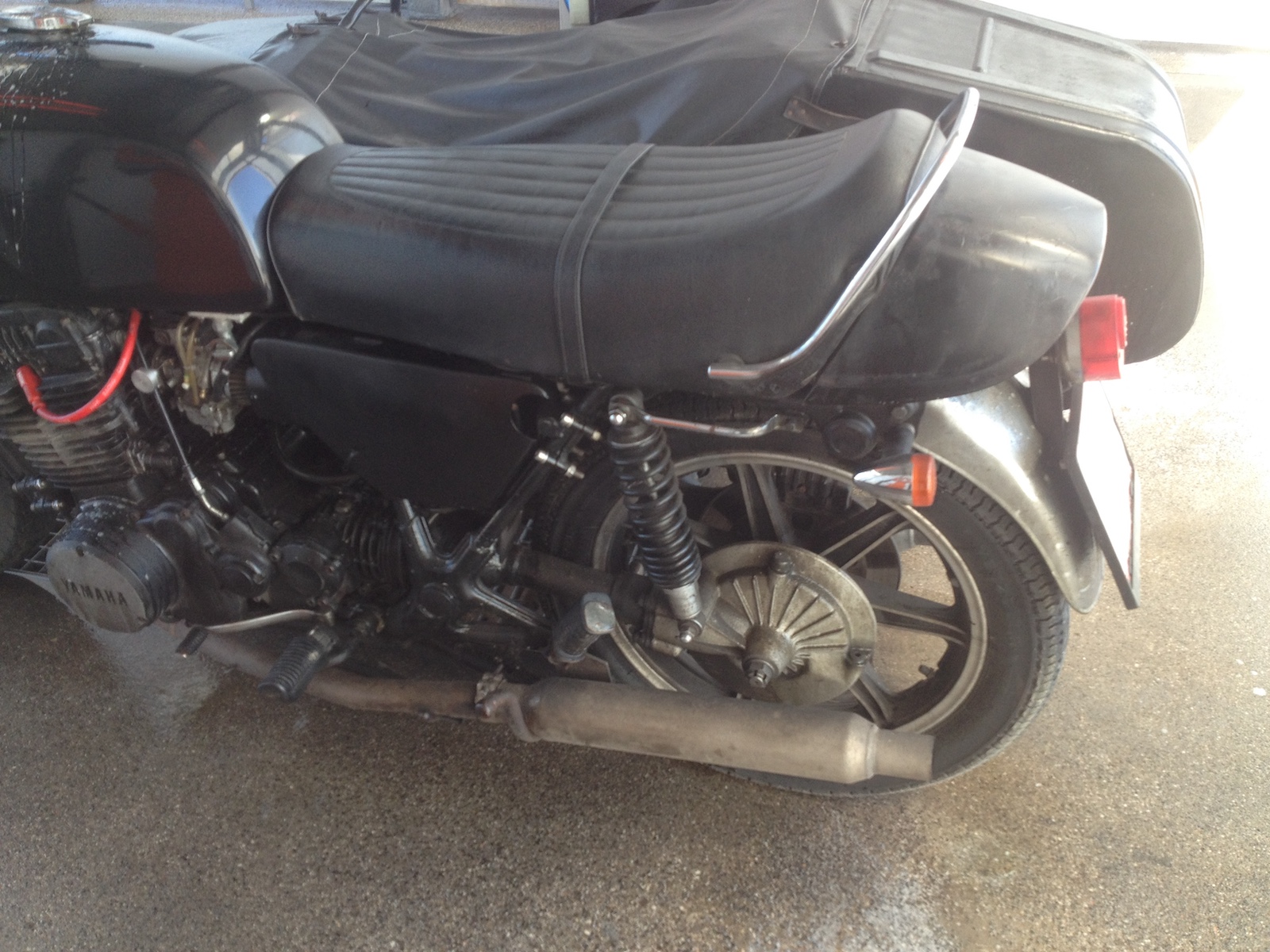 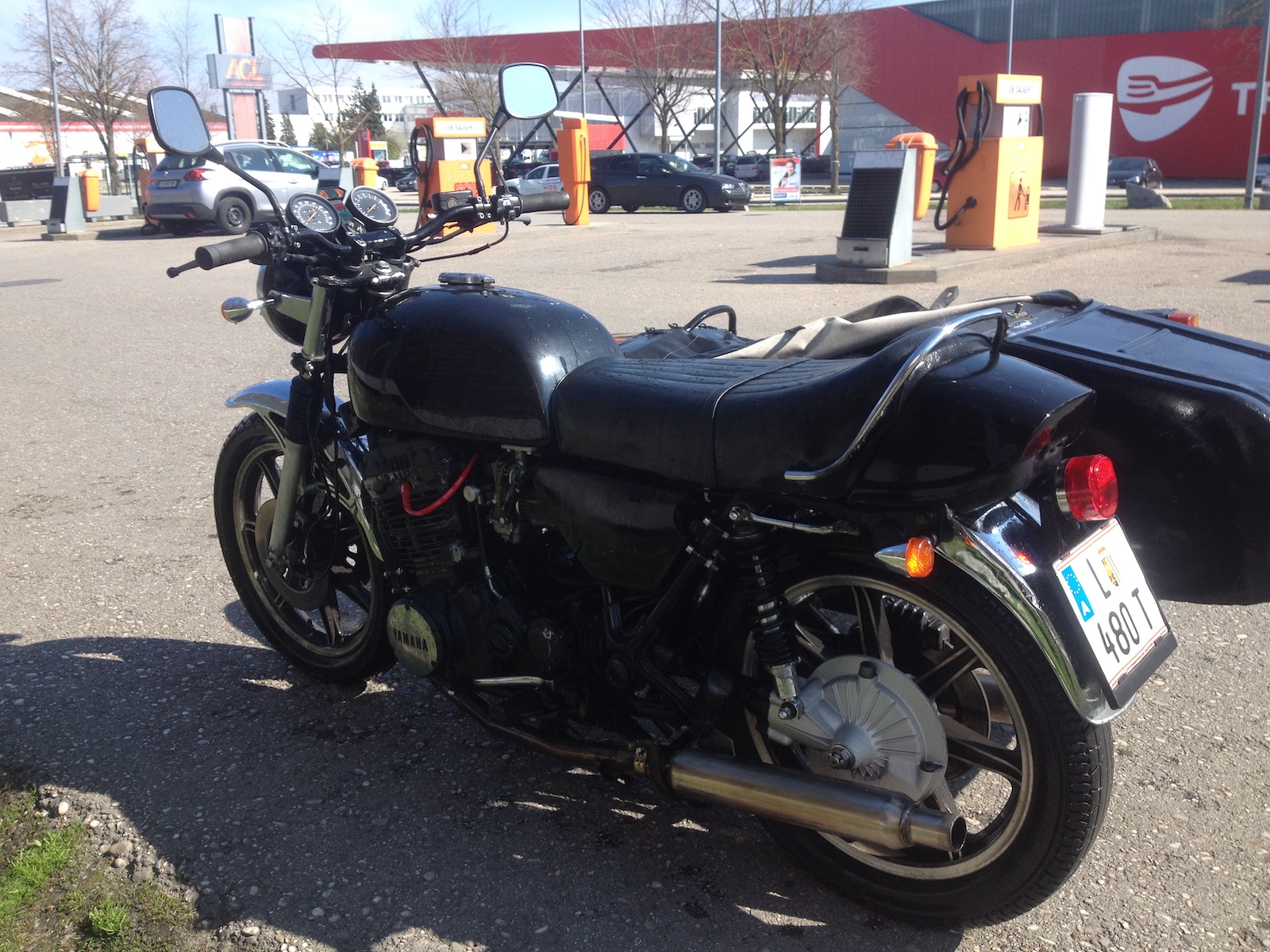 Still the bike wasn't exactly performing to the fullest. Hanging idle, not starting up very well at times, sometimes backfiring like it was going out of style.

There were two reasons, another coil had rather quietly left the scene and decided to die and the other was the fact that after an unknown mileage the bob-weights of the ignition advancer had worn itself out so far that the ignition advance was wandering around at least 3-4 degrees at idle. 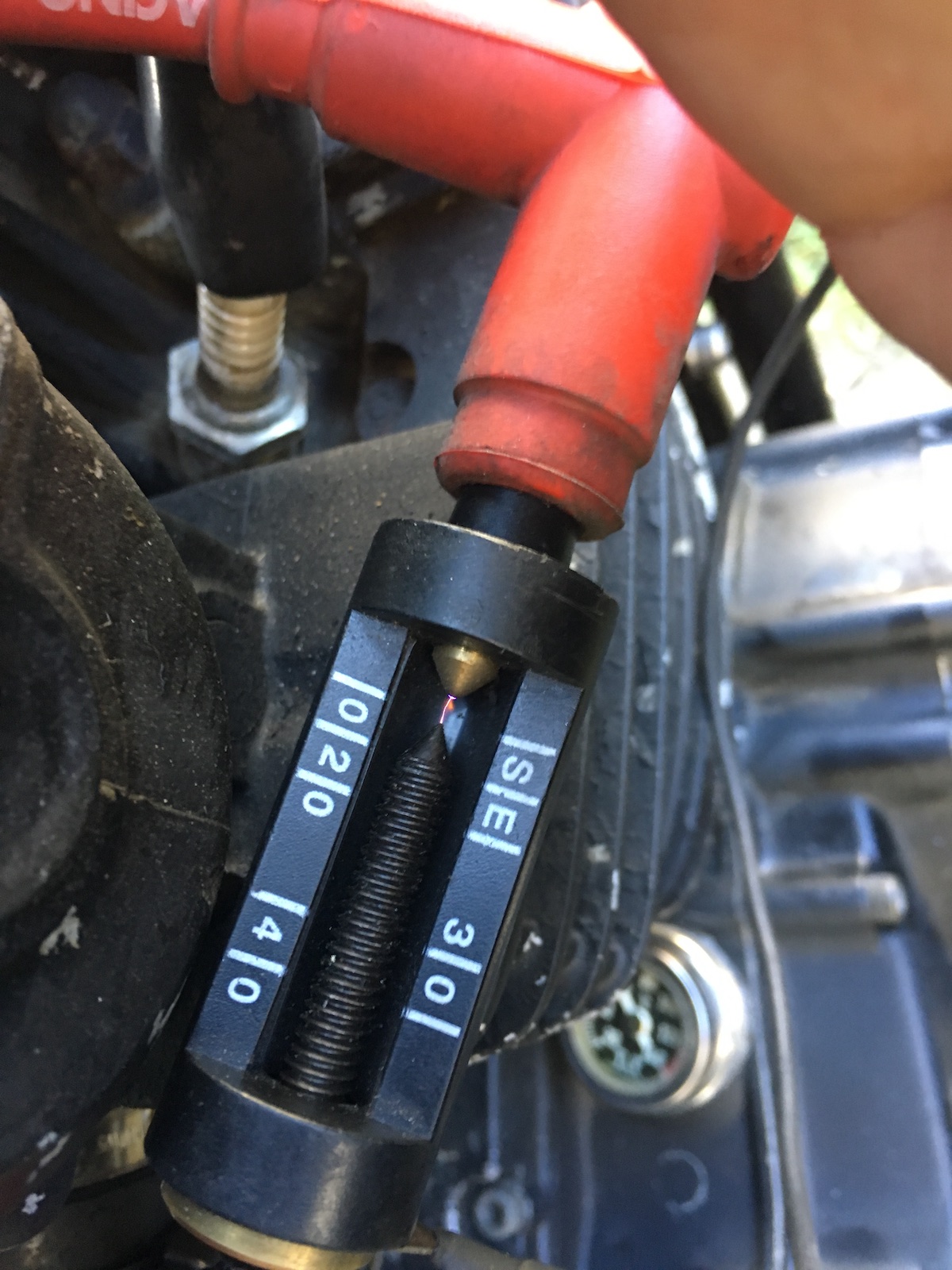 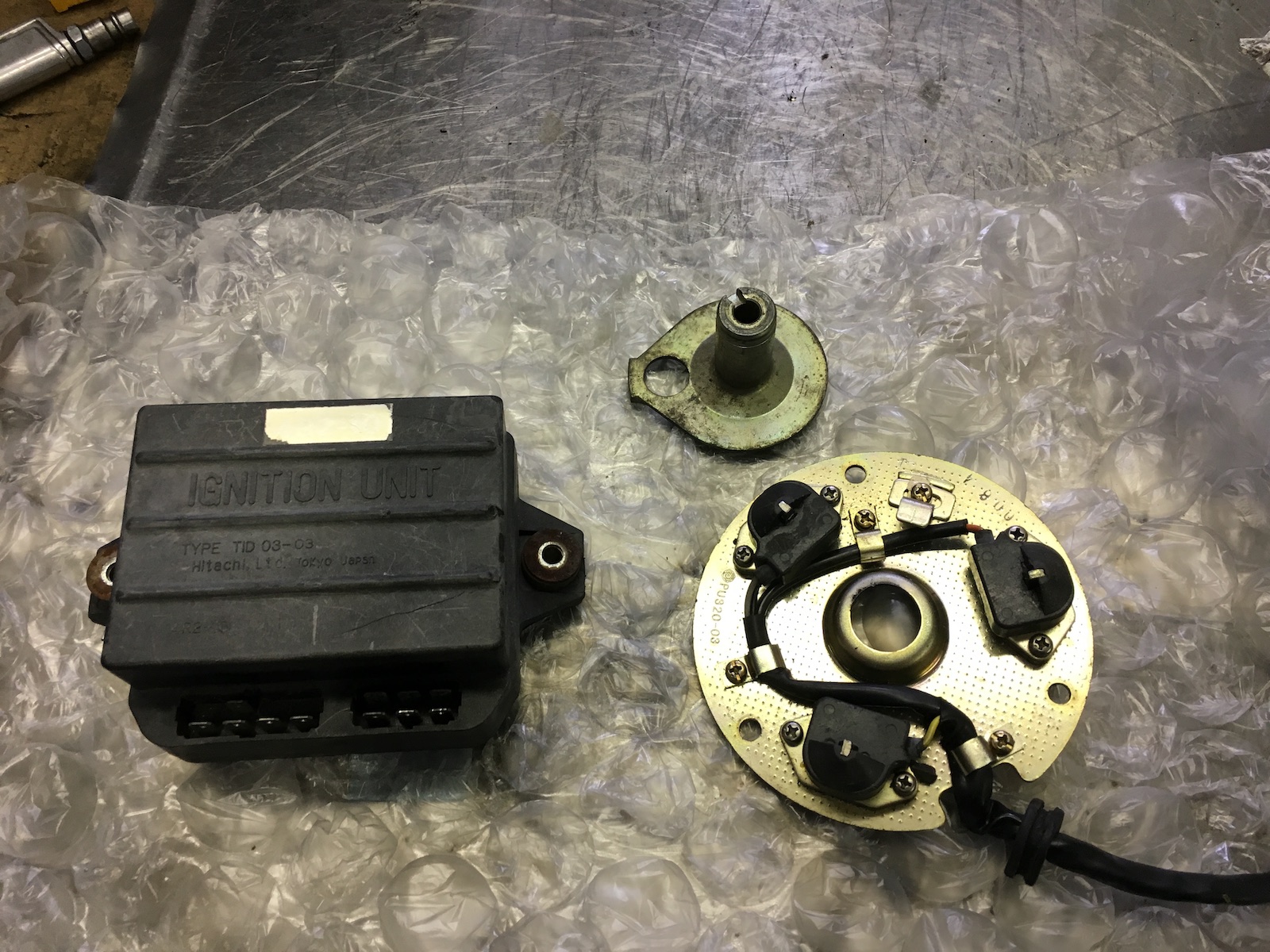 If that ain't a weak spark, I don't know what is.

The solution to the second problem came on the very last models of the XS Triple and was only available in the states in 1983 or 84. A fully electronic ignition with no moving parts that can wear out
Unfornately the slot on the rotor was seriously mangled, so it had to be welded up and then filed back to the stock size. 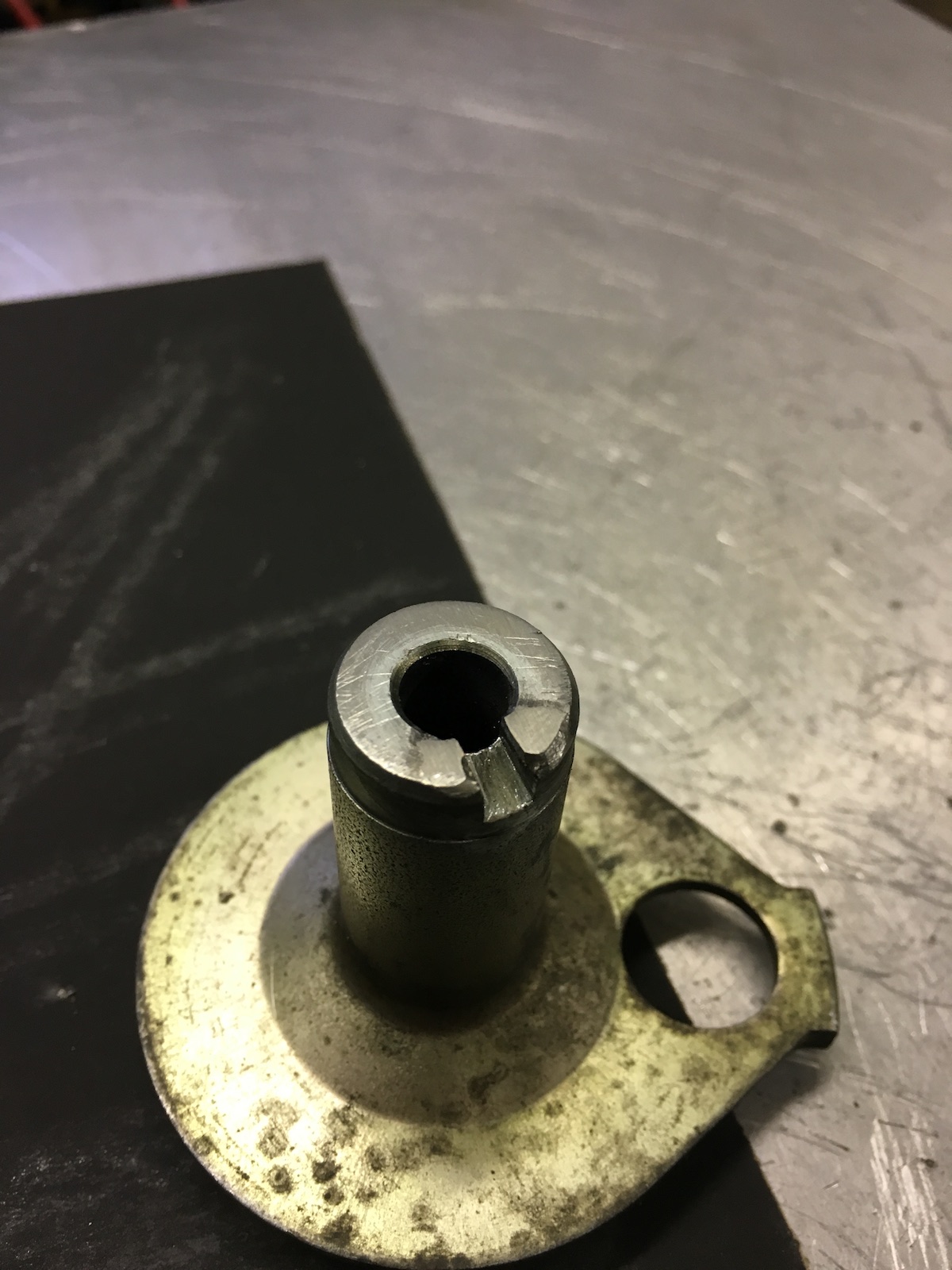 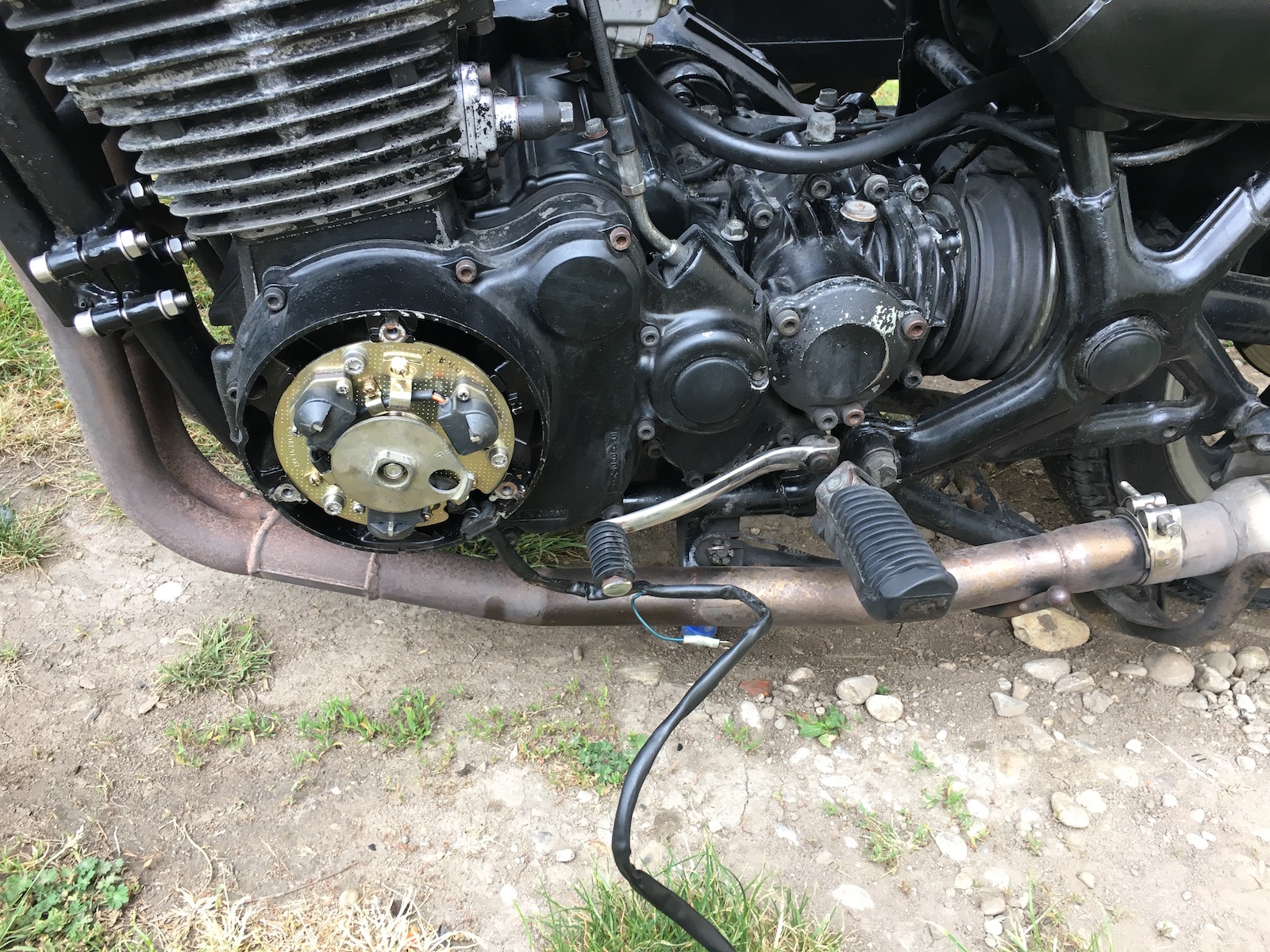 Just for comparision that's the first version of the electronic ignition with the mechanical advancer. 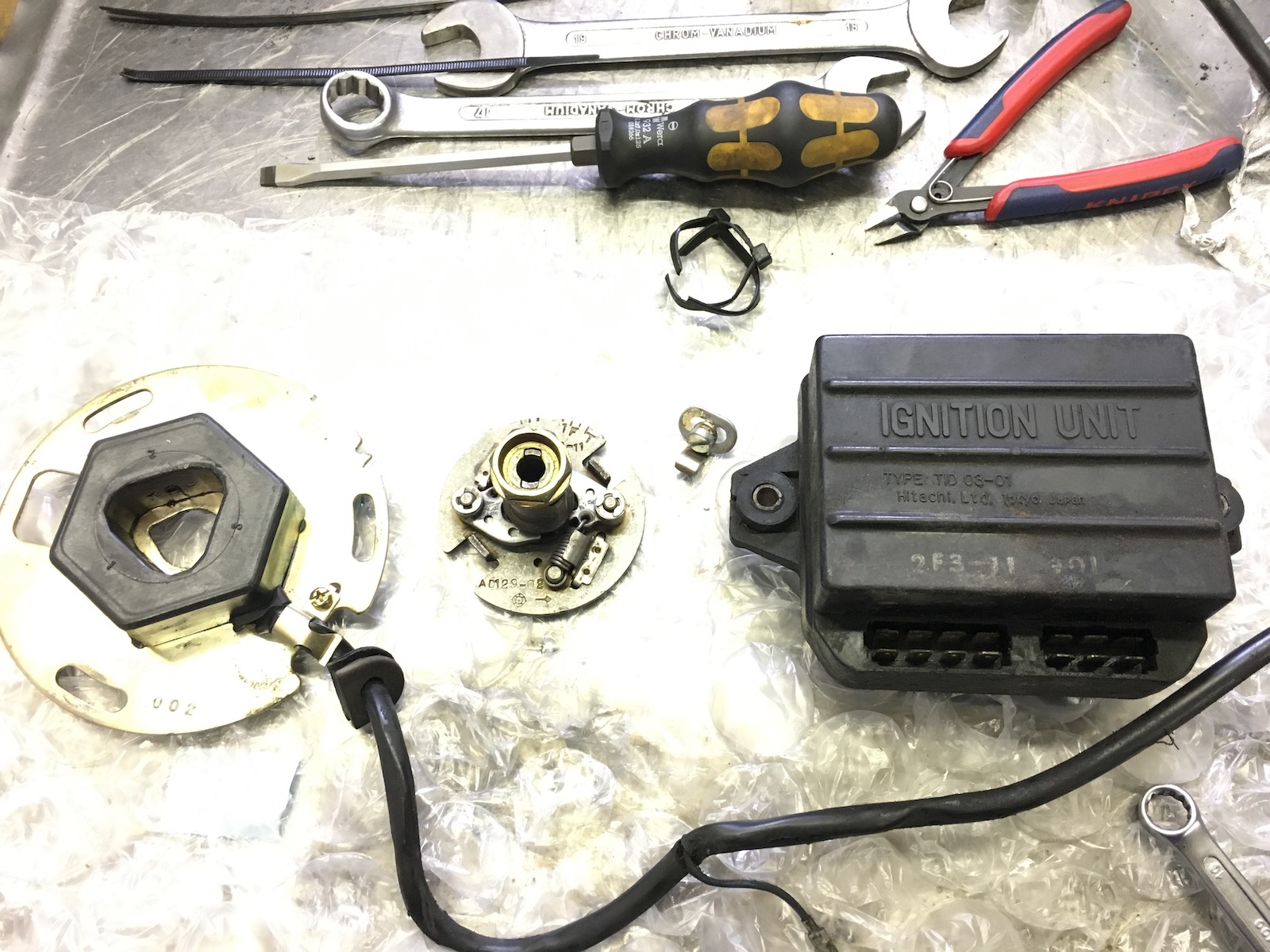 Nothing improves reliability like a fresh coat of paint. (And a front mudguard that doesn't rub on the front tyre...) 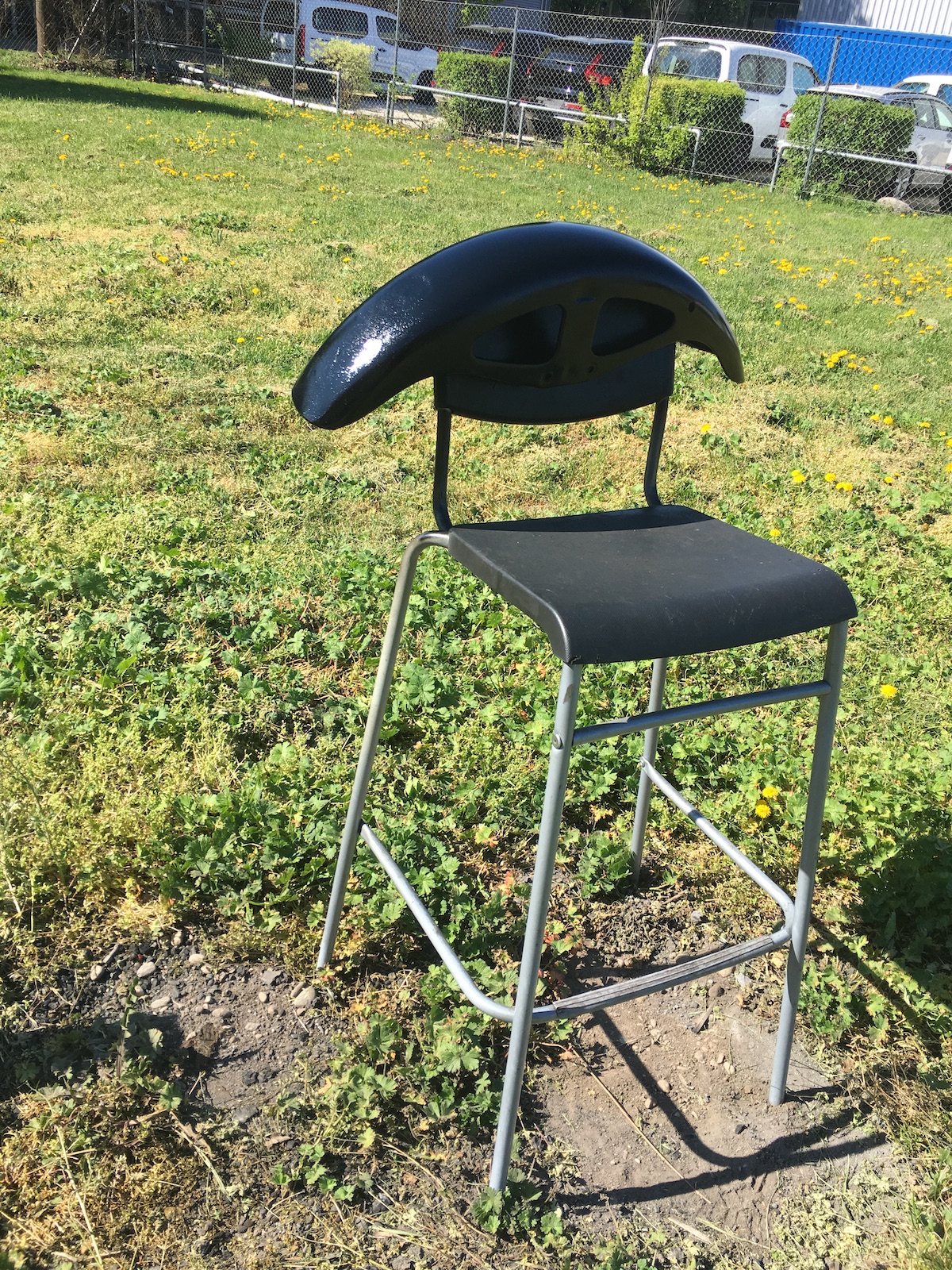 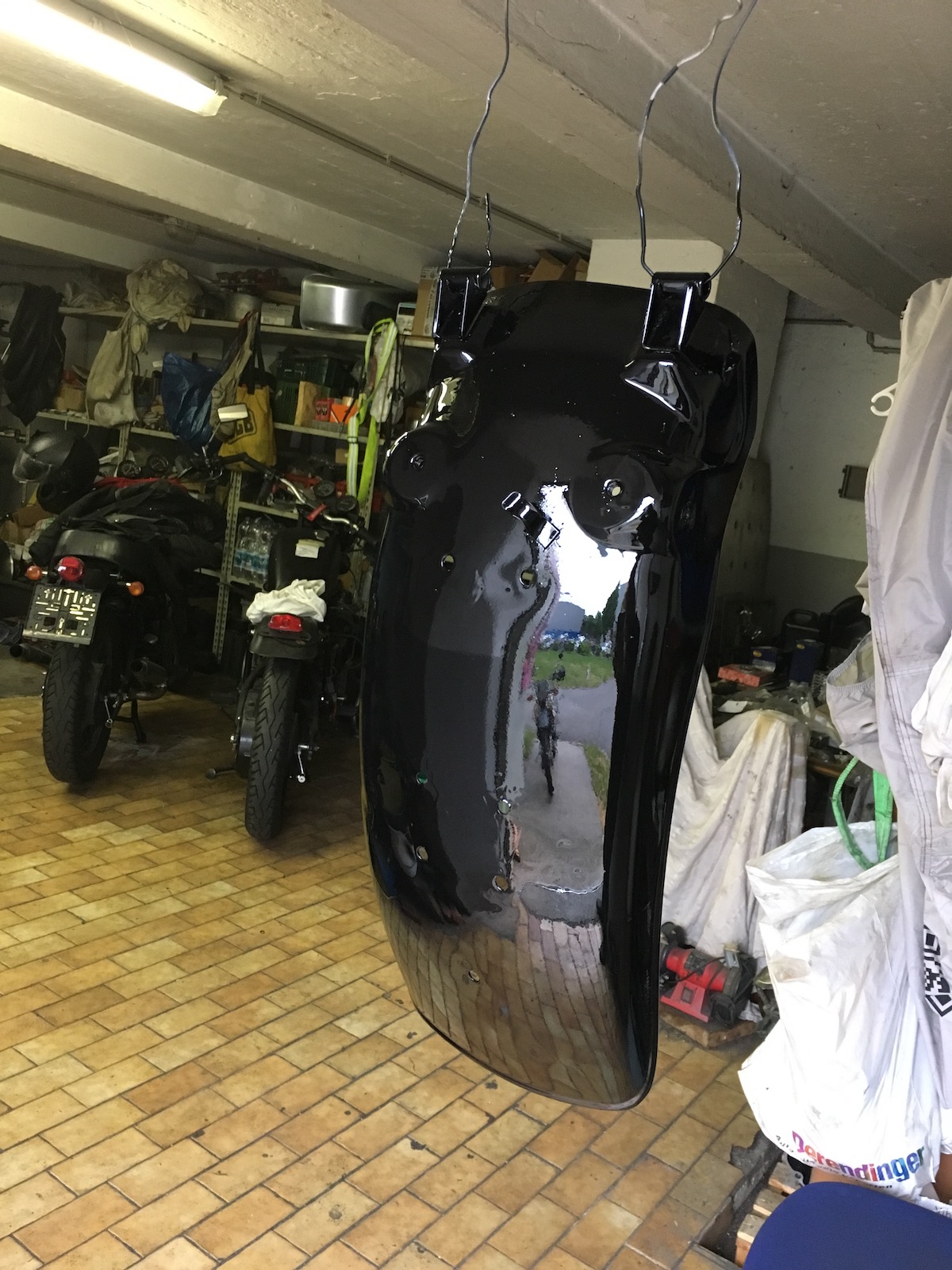 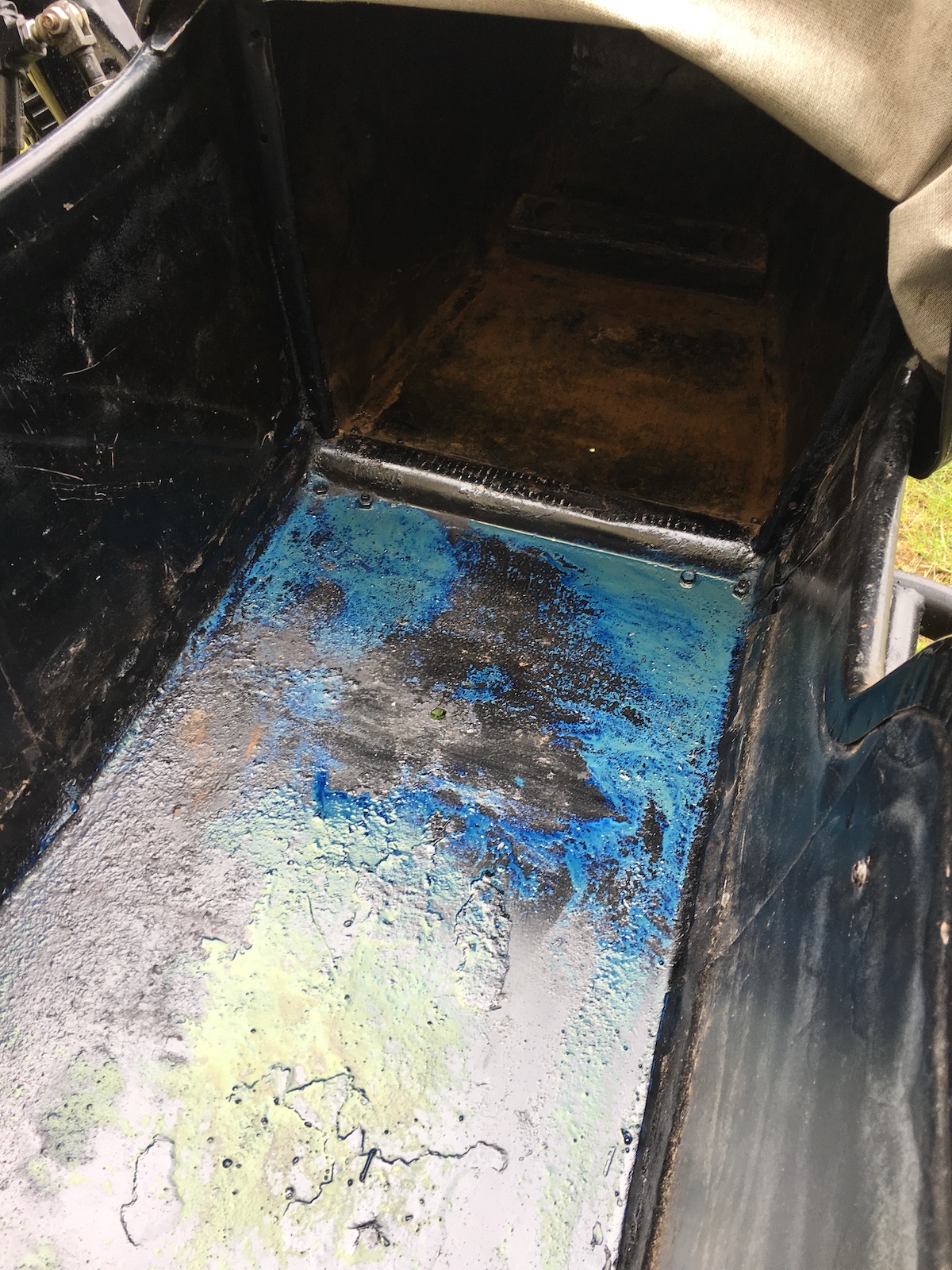 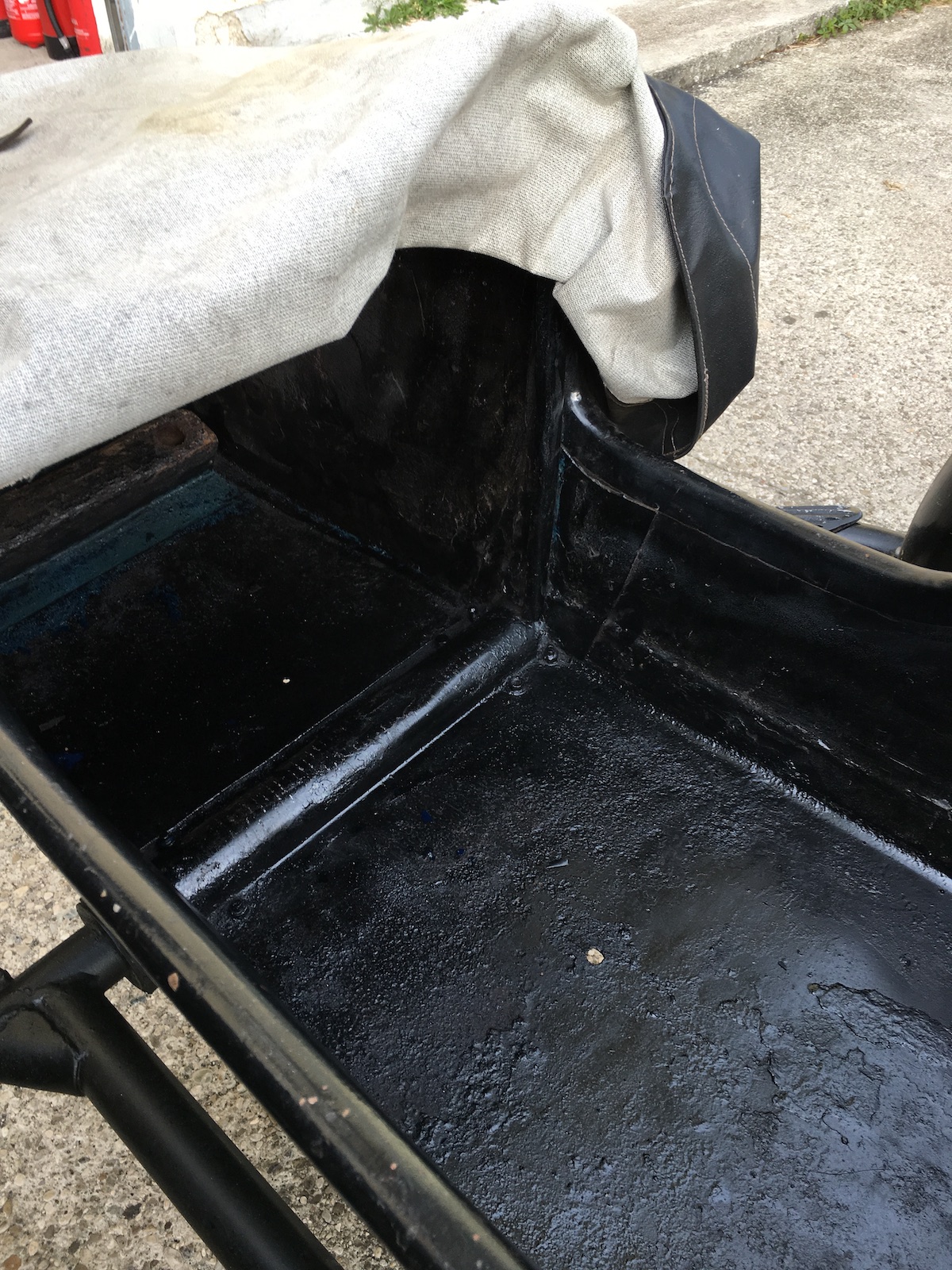 When swapping tyres for the roadworthyness-inspection, I discovered a slightly odd looking rear shock... 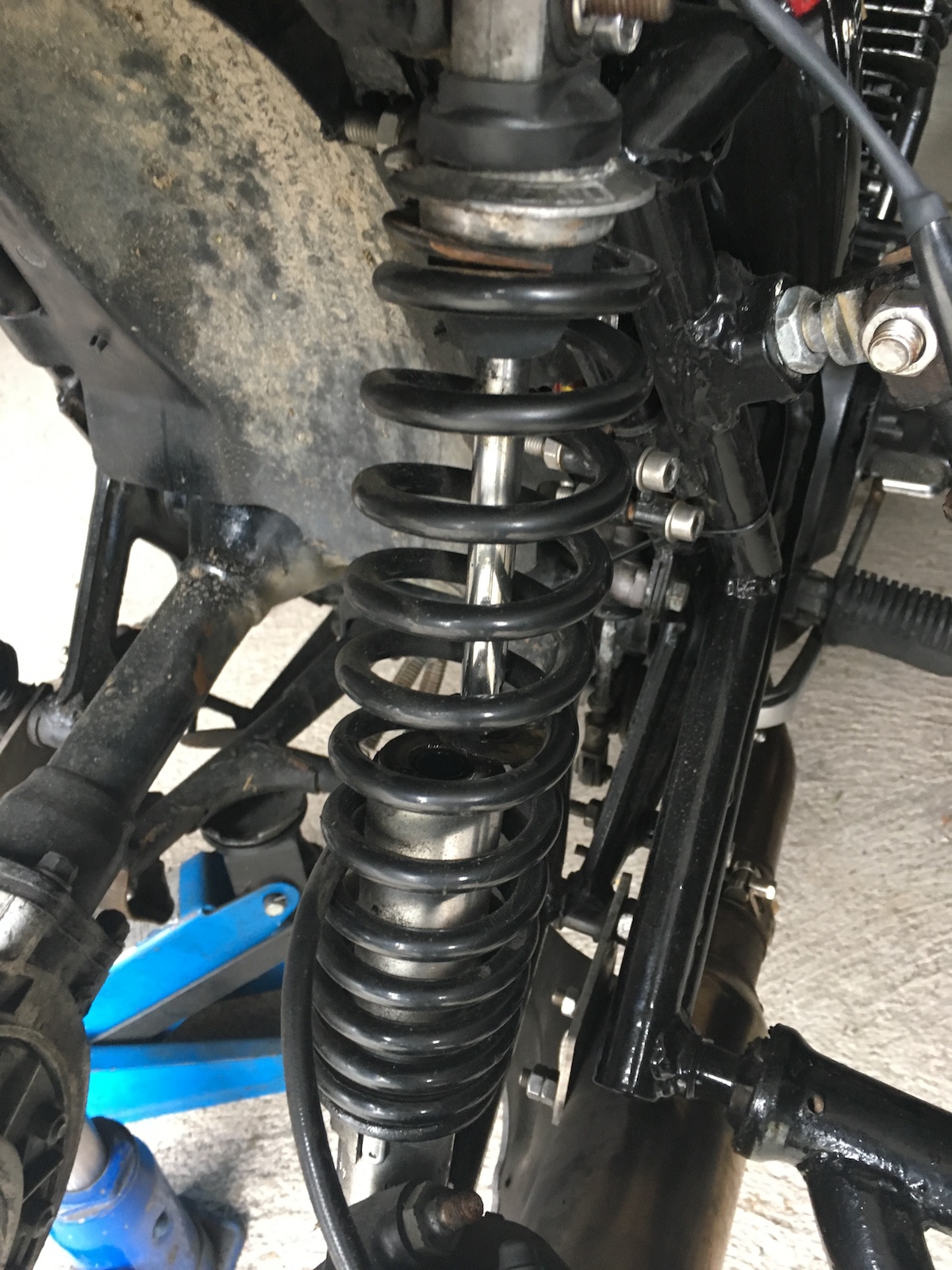 So a "new" set of Konis was procured, but they needed some modifications to prevent this from happening. (Who knew that the correct Konis had a bushing in the right lower shock mount as there's a smaller diameter bolt going through...) 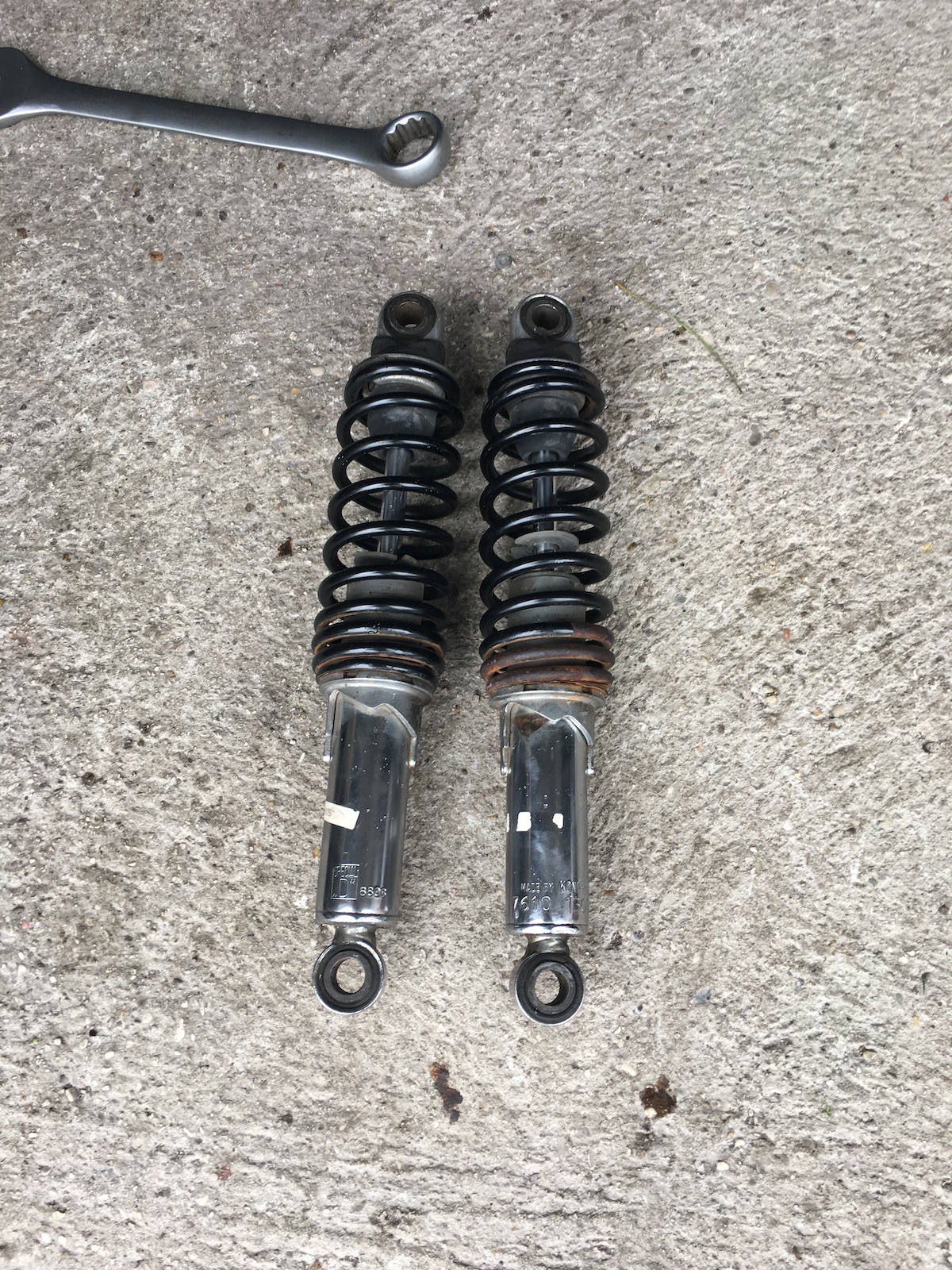 Aside from a new set of needles and subsequent multiple attempts at re-jetting this is pretty much what happened to the old girl. A new set of SE-clocks and upper triples, a new exhaust and some more patching up on the sidecar is still due, but other than that it seems like we're in good shape by now. (Also I may try to officially get the sidecar brake removed from the paper-work as it just an incredibly heavy anchor that is insanely overpowered considering that I mostly ride around alone.)

I shall just leave this here without further comment... the title says it all, I think.

DTT BOTM WINNER
Quite the journey. Sounds great and looks like a ton of fun.

No good story is told in three posts.

i hope you didn't ride that motorcycle without an appropriately sized and formatted numerical identification device, you'll be hauled over the border and shown what the TuV do to your sort of person

also that doesn't seem to rev like a 'normal' XS750, i do hope you haven't illegally modified either your induction or exhaustion systems, thats more TuV rubber hose action you're in for

TÜV? Pah, TÜV is for girlscouts who are trying to sell cookies that are over their best-before-date. 8)

On a more serious note: I've spent only 50 quid less on getting the correct engineer's report for all the mods than for the actual bike and sidecar. As a matter of fact it is fully legal in this guise. Well... mostly, I removed the sidecar brake, because it was useless.

Now on to my workshop and do a little re-jet to iron the flat-spot out, that's bugging the bike.

For those, who can't wait, here's the link to the blog-post. I'll transcribe it into a thread post tomorrow (I hope).