only on my wife's birthday!

I have a cb360 front rim with a newer tire on it, if you are interested.

Here is a pic: 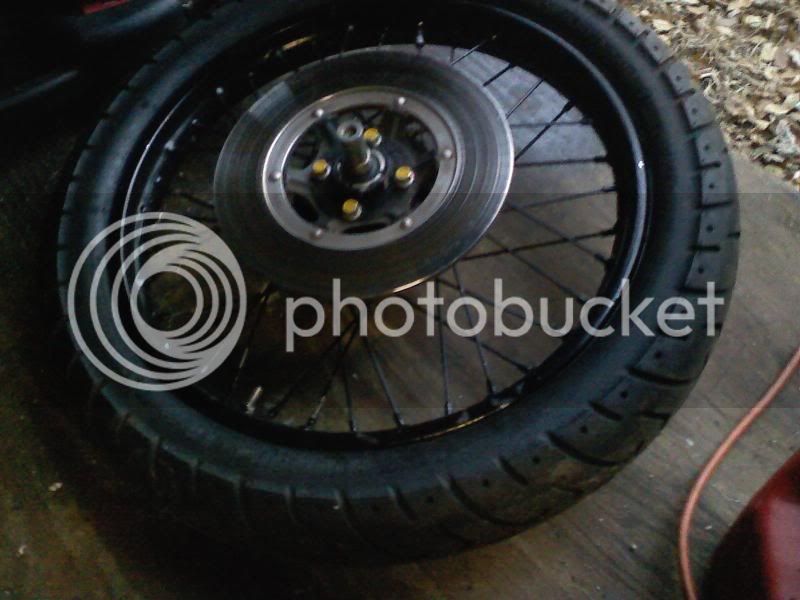 
blue44067 said:
my bike has a "half assed hard tail" too, just struts welded to my swinger and to the seat bars I really like your design. What is that tank from? One thing I've noticed with mine is that the back wheel seems to wander under the bike at high speed on gravel roads. I think its because I haven't welded the swing arm to the frame, and my struts are too small in diameter. Anyways, I like the look you've got going there.

i dig that tank!

You think the Carpet Pissers did this?


Beard said:
i still vote no brakes period..
and the big shoes..
Click to expand...

I agree. Clearly the best option.
B

So I just want to remind everybody this is the bob/chop section nothing that happens hear ends up being better or safer than it was in the beginning.
Once you have made you comments, and its clear the builder is committed to his design, butt out, and let the man build!
C


barnicle said:
So I just want to remind everybody this is the bob/chop section nothing that happens hear ends up being better or safer than it was in the beginning.
Once you have made you comments, and its clear the builder is committed to his design, butt out, and let the man build!
Click to expand...

That was magnificently said!

I agree with you, man; I do. But I think you're pissing in the wind here. My concern is when the bike fails--and it will--increased regulation on homebuilders will occur. It's something we're up against anyway.

This design is so fundamentally far from reasonable and prudent, you gotta smile man. You do. Natural selection always manifests.

that 2" section does look badass in that tank... i just hope it doesn't get fucked up when the frame breaks


motofiaccone said:
when the bike fails--and it will
--Chris
Click to expand...


Where and why?
C

Seriously? Look at the load paths on this thing. As the neck gets loaded vertically, the bending moment is exactly where the backbone is preloaded--out of sheet metal. That's going to force those tiny upper engine mounts down and will ultimately fail. One pothole or a rough railroad crossing will ensure that will happen. But that's nothing...

In the font, at least there is a dampening mechanism to, well, dampen the load on the neck. In the rear, the wheel will take infinitely variable shock loads as the wheel bounces down the road. Introduce a pothole or some other traumatic bump--which we see everyday whilst riding--and that upper mount gets jammed into the backbone, again at the bending moment. That backbone? .090" sheet metal which is trying to buckle in it's stock form. We're not talking massive speeds or overly traumatic loads here. A 250lbs man just sitting on the bike could do the trick.

Really, I don't care. The more I look at it, the more I realize the catastrophic event will happen close to home and at very low speeds. My hope is that we at least get video or photo evidence of the bike and no one gets hurt.

All that sounds serious.

Can they be fixed?

Seems unkind to not care about another motorcyclist experiencing catastrophic failure, albeit close to home and at hopefully a slow speed.

People have stated concern and were ignored...

I'm not even going to bother arguing with you guys. The frame is good, the bike isn't going to break in half. Shut up and enjoy the pictures.

Chris, with all this fancy talk about loadpaths, it sounds like you should be in my line of work. We could use more people that actually understand loadpaths. I agree with your assessment. The piece under the "seat" punching into the middle of the downtube will bring about a quick fatigue failure. But it is his bike. As my mentor said, "You can't push a rope."


dynamitedave said:
I'm not even going to bother arguing with you guys. The frame is good, the bike isn't going to break in half. Shut up and enjoy the pictures.
Click to expand...

Well said Dave. We will enjoy the pics. Keep them coming.

I usually don't post very little thing I do on forums. I post a little text and some pictures and let you guys fill in the blanks with the hope that you guys will just assume the fabrication is good. Clearly some of you have more time on your hands and need more hand holding than I would generally provide.

Here is a picture I colored on to show what I feel are the load paths, dynamic and equalizing. It shows gussets and load distributing triangles. It shows the dynamic load (green arrows) going up the frame from the start point of the load at the rear tire assuming the pivot point of the load would be the location of the stock swing arm support. It also shows the equalizing load path (orange arrows) that will travel through the gussets and supports to distribute the load and prevent failure. In the picture below "A" is assumed to be the failure point if failure was to occur. What you can't see and what motofiaccone assumed wasn't there is a plate that runs above and below the point of attachment to distribute the load. Not that the load at point A would be that significant since the load is being distributed along the path of the orange arrows. 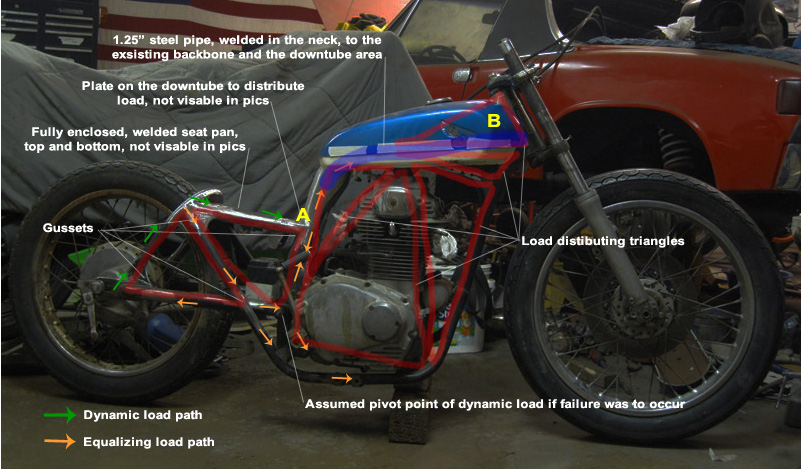 motofiaccone said:
That backbone? .090" sheet metal which is trying to buckle in it's stock form.
Click to expand...

The backbone has sheet metal in the construction (area "B" above) of it but unlike a stock CB350 there is a 1.25" steel tube (3/16" wall thickness) that is welded into the neck and is fully welded through the remaining stock lower backbone (where the top engine mount is) and then welded to the down tube at the rear of the engine. There is also extra support connecting the pipe to the neck that was not shown on this thread. The sheet metal piece I welded in is 16 gauge (approx. 1/16" or 0.06" thick which it comparable or better than stock) and is welded to the neck and along the backbone that I put in. The angle of the triangle that the sheet metal makes is appropriate to distribute the load along the backbone of the bike. If the angle was too steep it would not provide enough rigidity to support the load. The shape made is almost a perfect geometrical triangle.


motofiaccone said:
A 250lbs man just sitting on the bike could do the trick.
Click to expand...

This thing isn't cardboard, its steel. Do you really think a 250lbs man just sitting on the bike would cause the frame to break? Seriously? I'm only 170lbs so I guess I'm good to go right?

Feel free to get your crayons out and color on a picture of the bike if you want but ultimately without seeing what I have done in person and the steps I have taken to ensure the rigidity of the frame you have no sold platform to base your unfounded opinions on now do you?
C

I certainly appreciate some quick research, but you're off on so many different fronts. I don't even know where to begin. You don't really get this stuff (chopping up a swing arm is a good example). And that's OK. Really.

Again, I don't want to get into a pissing contest, but I've seen pictures of fat girls. I don't need to see them in person to know they're fat. A photo does just fine. Same with you bike. A photo suffices.

You've got 27 posts on this forum and knowledgeable and long-time contributors are offering constructive criticism. This is a pretty positive forum with people who sincerely want to help others. Some people get it and others don't. And that's OK too.


motofiaccone said:
but you're off on so many different fronts. I don't even know where to begin.

I've never chopped anything too crazily so I'd like to hear more too! Motofiaccone definitely has his stripes when it comes to motorbikes, so don't take his words as arrows or bullets...he's actually concerned for your well being, as am I and probably the entire site. I'll offer this up to Moto....can it be fixed at this point?
You must log in or register to reply here.
Share:
Facebook Twitter Reddit Pinterest Tumblr WhatsApp Email Share Link