Maritime said:
Looks great. I took your advice and grabbed a Napa flasher. Its a 2 prong so I think it will work better than the 3 prong i bought earlier.
Click to expand...

Remember the green wire is not used.

Yep, I'm pretty good at wiring. I installed it first and it worked, sort of. Being all LED and not very much load the signals flashed dim bright instead of off on. So I hacked the old incandescent ones and pulled the sockets and bulbs and wired them hidden behind the tank and now the LED's flash on and off and all is well.

Amazon and UPS delivered two days early, so I took advantage of the great painting weather and laid down the clear coat on the project bike's panels. Looks pretty good but now I can't touch them for a couple hours. Hopeful to mount them up Saturday! 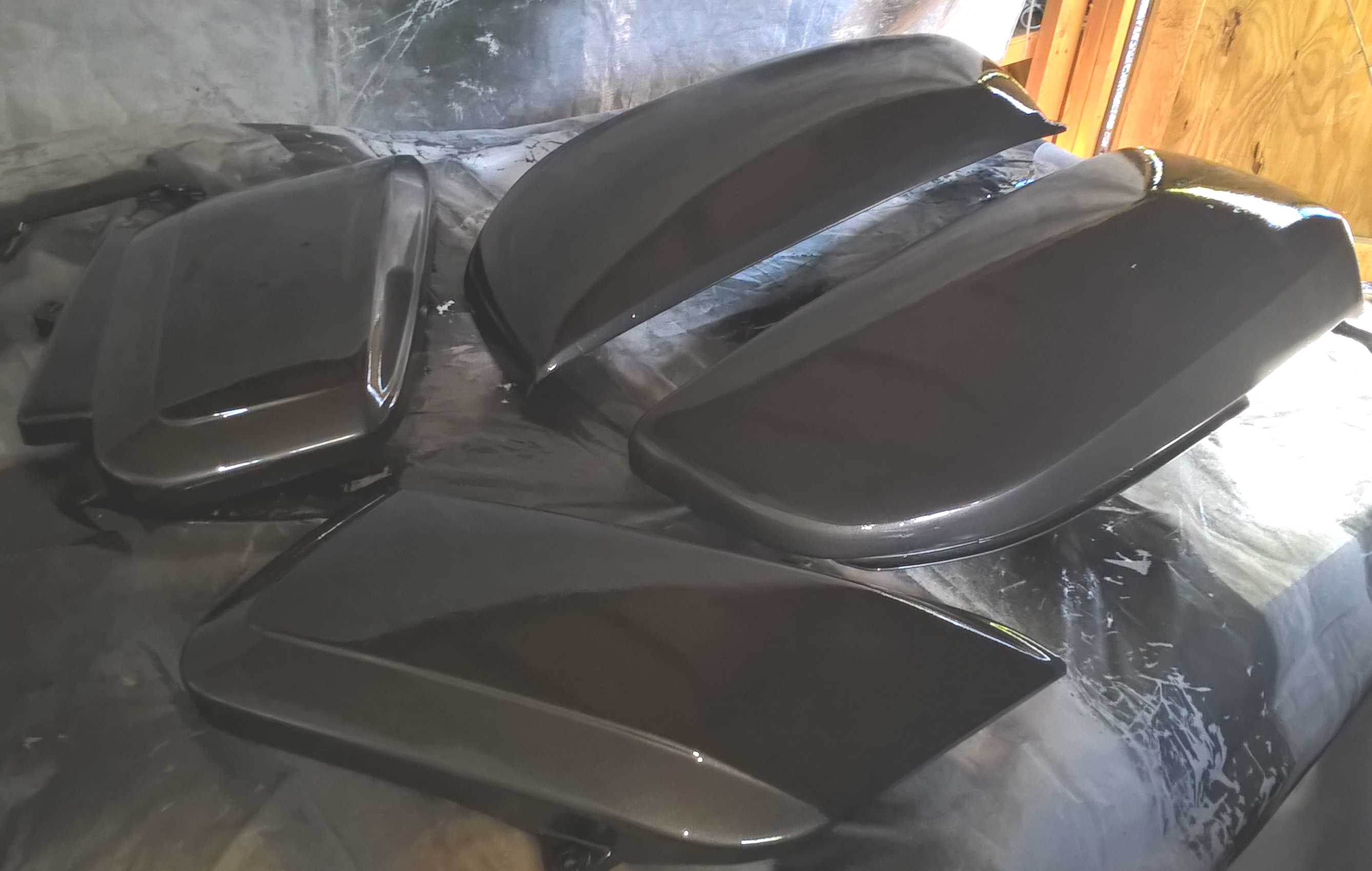 After repairing damage from both front and rear brake fluid uh-ohs and wet sanding orange peel on the right side covers, I mounted the badges (3M VHB tape). Johnny 5 is pretty well finished up. Paint is actually two-tone (subtle difference, stands out as you move and light changes). Not my best, but the starter clutch finally started working reliably. Hope there are some days this week to stretch her legs! 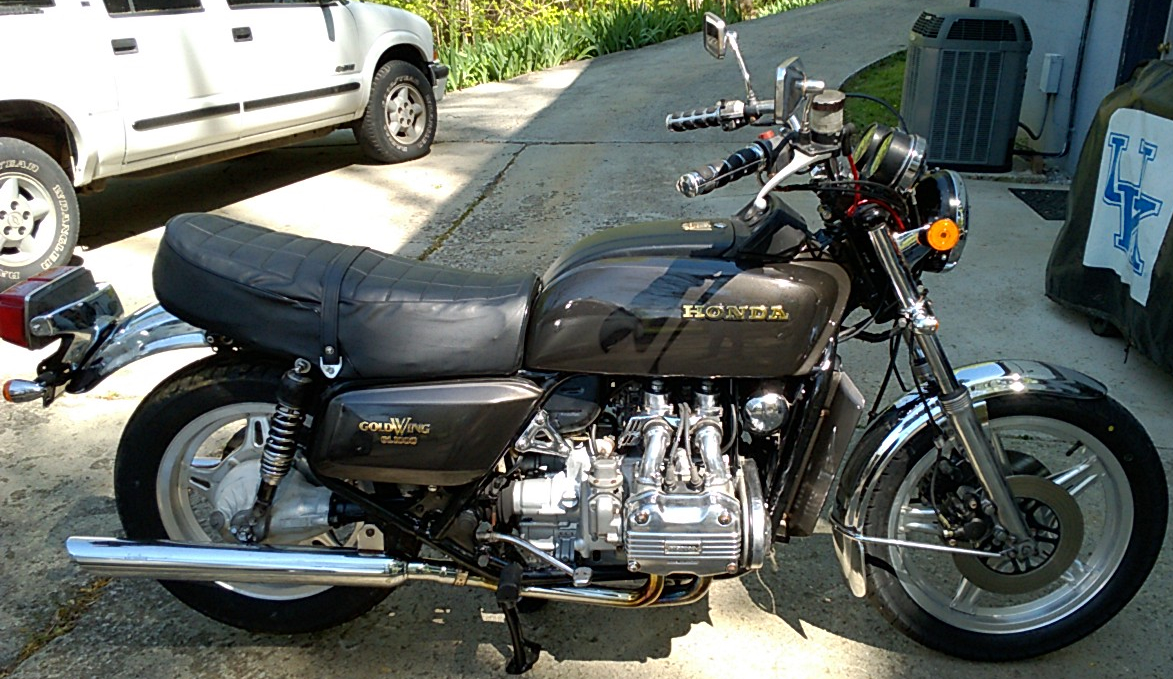 She was setting with nails for shelter hinge pins in that photo. Yesterday evening I took scrap 5mm rod (what passes as "pegs" with cheap canopies), machined flats so I could drill 5/64" holes in them, cut them off, and used them in place of the nails and misplaced hinge pins. Correct diameter (measured those on my '79) and further participated in isolation.

Still some nit-picky things like brush painting a few items. Also wrestling with drilling out a bunch of the seat cover pop rivets and adding ~1/2" of foam on the sides to fill the cover in. I know it looks a bit tatty as it is, but I fear that if I take the cover off the wear and tear of that will damage it.

DTT SUPPORTER
I really, really like that colour, and your bike looks the absolute business. I've really come to love these old 'wings after recently helping my friend restore a mid 70's one. Hope you get some time to take the old girl out for a blatt this week too!

DTT BOTM WINNER
For sure on the paint. Looks like you're ready to ride to Alaska.

Well, she still runs pretty rough, but I'll iron that out. It doesn't help that it has '77 carbs on a '78 engine. Took some "glamor shots" today and put about 20 miles on her. Friday is supposed to be great weather and I hope to have it smooth enough to ride over Norris Dam then, doing my part for Homeland Security. 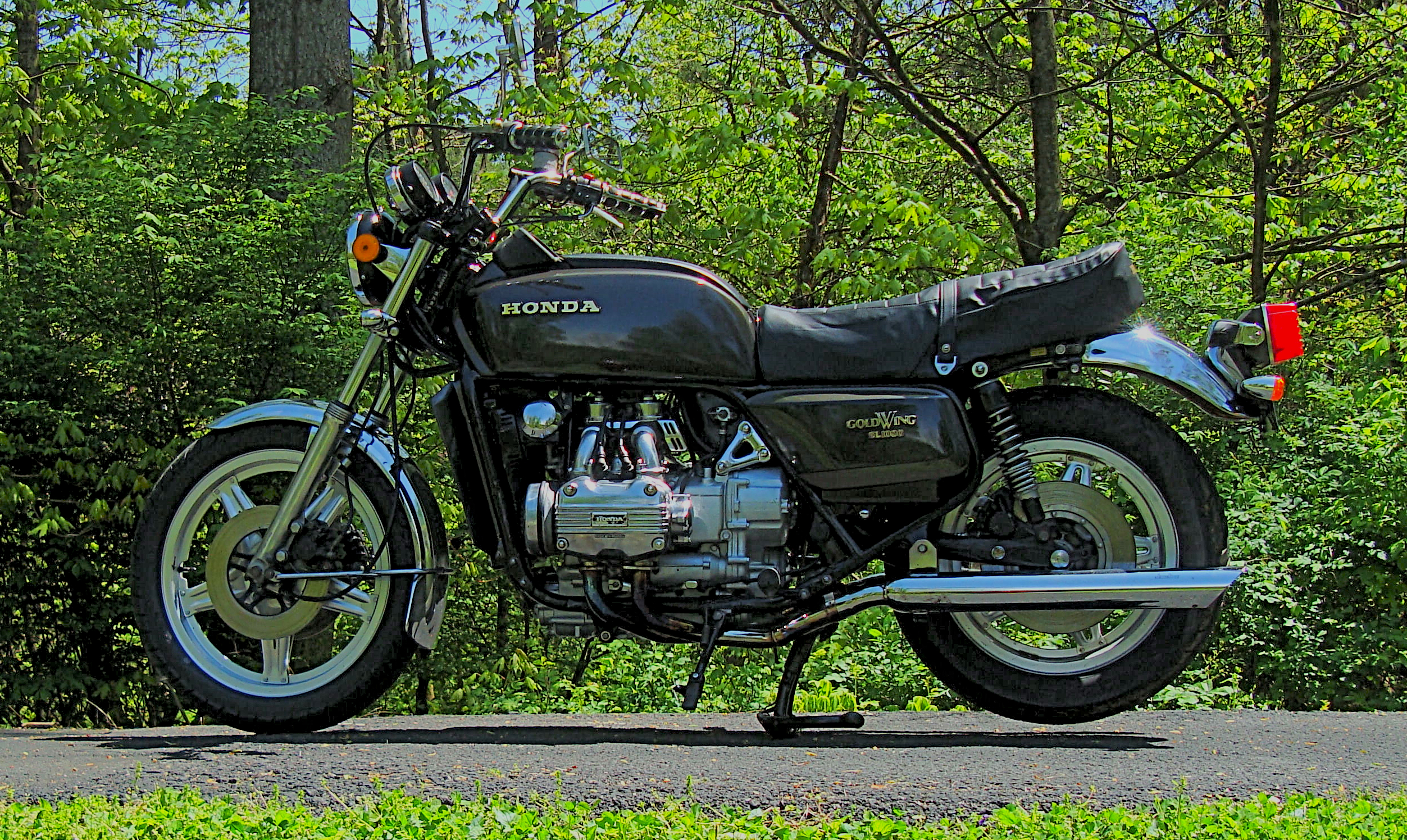 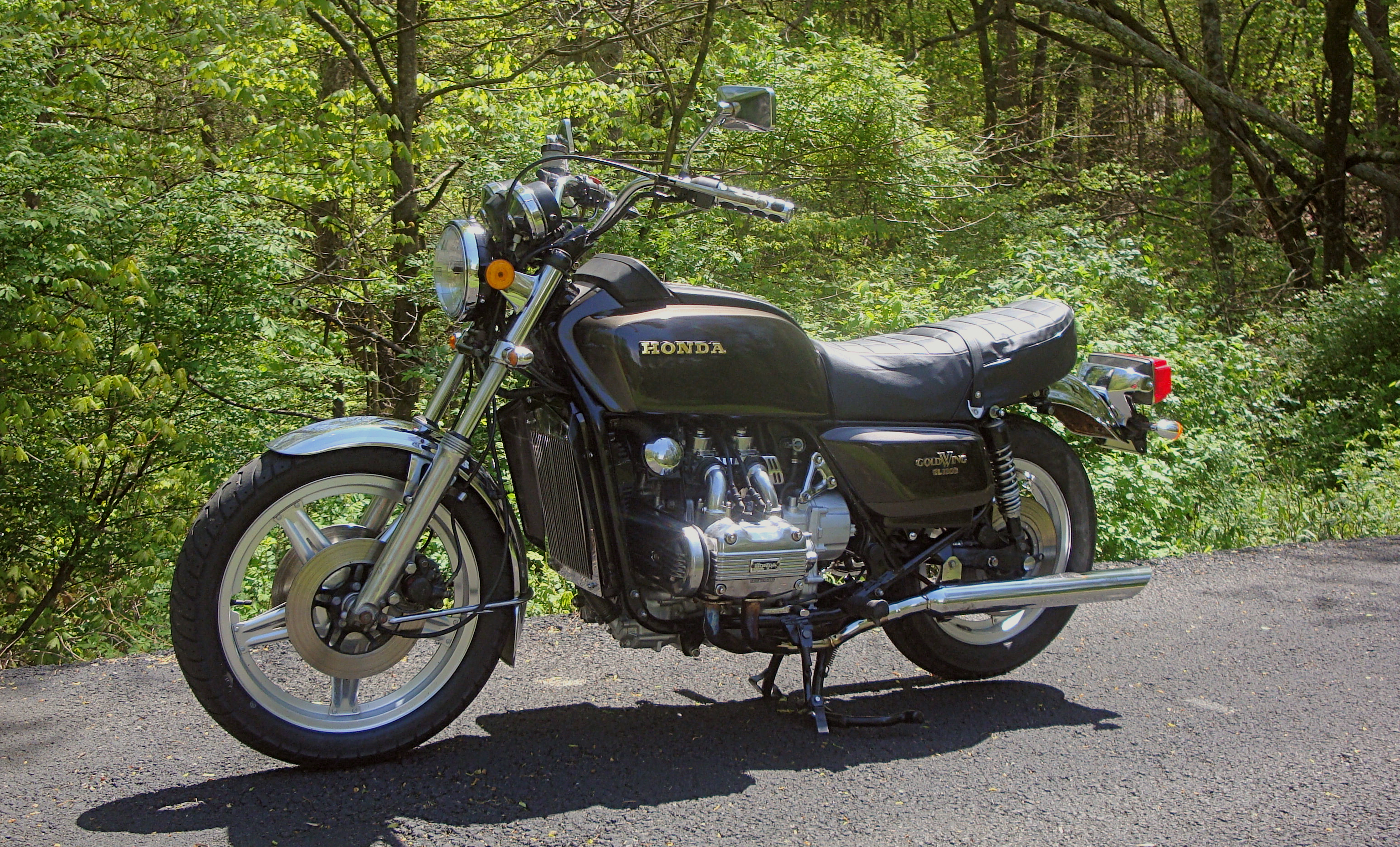 Very nice, I just stole one of your pics for my wallpaper collection

She looks great out in the sun.

Thanks, Guys. She's running much better now. I figured the nasty looking Prestolite ignition was flaky when I was adjusting the pickup way out past its specified gap and the engine sped up and smoothed out. But, then it stopped and would not restart. Swapped that out to the Dyna S that came on my '79 and now it is sounding right. I might end up taking the standard points system off of the Hunley and put the Dyna on it, then put the standard points on this bike. It still has the condenser bolted up (not connected) and the original ballast resistor, s that should be a quick swap-out.

Swapped ignitions around. The Hunley now has the Dyna S and Dyna resistor. Fired right up and sounds great! I plan to get a ride in on both Hunley and Johnny 5 tomorrow. The standard points on Johnny 5 sound good, too. I think the Prestolite may be flaky.

Did my part for Homeland Security again. Twice, actually. One trip over Norris Dam on Johnny 5, which really seems to like the standard points ignition, and another trip on the Hunley. Each trip was about a 45 mile loop.

Took the bike for a nice ~100 mile ride a few days ago. Mileage determined by putting the route into Mapsource and seeing the calculated distance. Why? The odometer and trip meters have stopped working. Opened the speedo case (not fun, but I've had to do it on several bikes) and discovered the first driving worm gear is completely worn out. Tried to tighten its driven gear to itm but it is just too far gone. I'll watch ebay for a cheap replacement, but I have an early ('75 -'77,) speedo that came as a spare with the Hunley. Some things are a little different, and it doesn't have the turn signal speed sensor but I'll try today mount it up. Face doesn't really match the other (or the tach) because it is just white on black. Trip reset knob is in the back, but I have the chrome housing for it all, so that is covered. Since the original was so badm there is no telling how many miles are on it. It indicates over 78k, but that may be grossly under actual. The spare that I have shows only ~11k, but the odometer seems to be good on it.

Well, the early speedo fit with a few minor mods. All mounted up. Doesn't look drastically different (but noticeable). Too wet today to try it out. 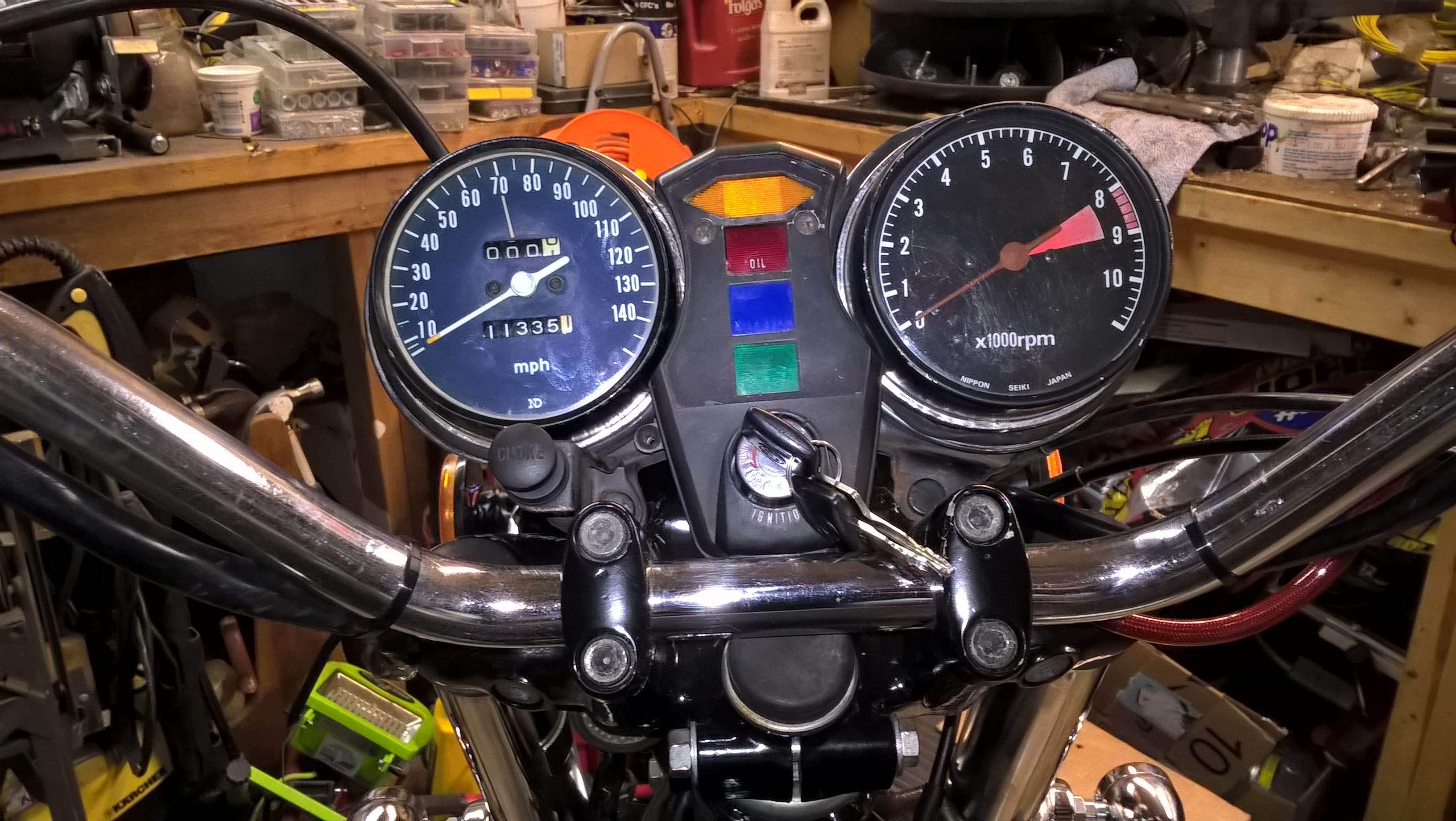 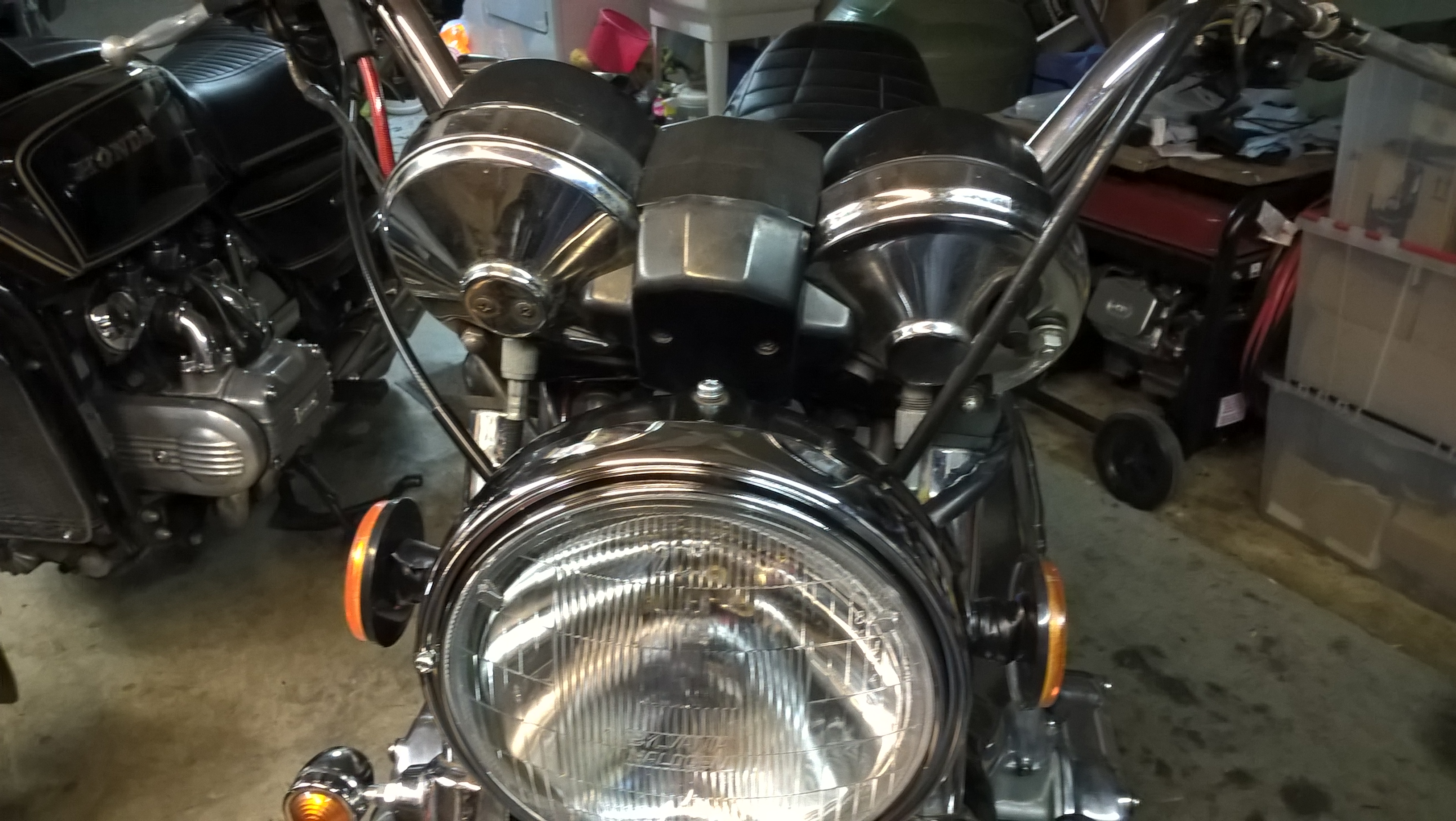