All that was accomplished yesterday was removing the latch pegs and sanding the side covers. They are different colors, and had different stripes. One had decals that sanded off, the other vinyl stripes cleared over that required a razor blade to remove. Luckily, the residue sanded off Okay. Hopefully will have low humidity today so they can be primed. Only one sidecover had a badge on it, and I don't have a spare that I remember, but I do have new shelter HONDA badges for it. Thinking a two-tone black and gold with 4:1 for the main and 2:1 for the accent (black-to-gold mixture). I did the 4:1 on Hunley's frame and it is very subtle.

Maybe I can get the shelter sides sanded today, then the little hinge cover. Has to be painting weather for the hinge cover as I've experience rapid flash-rust on them, so will need etching primer quick.

So far, the side covers are sanded and primed with etching primer as is the little plate over the shelter door hinge. Also the radiator scoops. Shelter sides had been primed with I think a sanding primer and painted with a thin layer of flat black. Makes it pretty easy to see all of the pock marks in them, which are very many. I've skimmed the worst one with Bondo glaze several times already and it works in small cracks and divots, but comes off from shallow depressions when I sand, so I'll try sanding primer. I found on the Hunley that I have to really let it cure before painting over it, and must seal it with etching primer first. Rolled Johnny 5 out again and fired it up - starter over-running clutch is still not engaging ~50% of the time, but when it does it works fine. Hopefully the MMO I added to the last oil change will do the trick. Luckily, the engine fired off pretty easy. I found that one of the idle mix adjust screws was not even started in its threads, so after screwing it in and back out to 2 turns along with setting all at 2 turns it really idles nice. Still have to balance the carbs, but I've never had problems doing that - might catch it tomorrow after tilling the garden for the wife and climbing on the roof to check antenna connections and aim. Front tire came today but I don't know if I want to go to a shop and get it mounted right now. At 67 and mild COPD, it may not be the best thing to do. Guess I could arrange to drop it off outside their door and pick it up later with payment by card or PayPal.

DTT SUPPORTER
Tilling the garden? Where do you live, 1879?

I've been bondo'ing away for the last few days too - one thing I have on my hands now is time. Plenty of time.

Nice, and the drop and pick up is how we're doing a lot of our deliveries now. We used to have a division that went right into the house with the whatever and set it up and took the old whatever being replaced. Now it's here it is in your driveway, we're leaving and you get rid of the old item.

Jimbonaut said:
Tilling the garden? Where do you live, 1879?

I've been bondo'ing away for the last few days too - one thing I have on my hands now is time. Plenty of time.
Click to expand...

Well, tiling with a 31" tiller on a John Deere garden tractor.

Shelter sides are finally ready for color. Rolled it out and balanced the carbs - wasn't far off but idled and reved so much smoother after. Last week I took the new front wheel to a small shop for mounting the new tire. Don't have a new tube, so I'll have him supply it to give him a bit more business. Told him I'm not in a hurry. Would like to take this one out for a shake-down, but the old tire on the spare front wheel is just not to be trusted.

So, garden tiled (twice), next may pull the carb off the old 1980 John Deere 216 that I till with and clean/tighten it up. Doesn't seem to idle down well now, so the old Kohler has probably vibrated someting loose in it - plus the throttle shaft has a huge hole wallowed out that needs a bushing made.

And the tag for the project is missing. I bought it just a couple days after buying the bike. Can't remember where I put it. Clearing shelves one-by-one looking for it. Title arrived a week or two after I registered and bought the tag and is stored with other titles, but no tag or registration slip. Getting old sucks.

I hate that too. I still haven't found the rebuild DVD.

It kinna' beats the alternative, though.

ridesolo said:
It kinna' beats the alternative, though.
Click to expand...

Well, I found it! Of course, it was after I bought a replacement (luckily only $12.50 wasted). I had placed it in my bulb/fuse drawer in the top center of my toolbox. I had checked the drawer a couple times, but it appears that they wedged in between a couple pieces of sheet metal in the roof of that drawer and as I pulled it open today to get the keys for the Hunley out of it they fell down into the drawer.

So, the guy called that my tire is mounted and I'll go pick it up from him tomorrow morning.

Once again, though - dealing with the county was a pleasure. I called the county clerk's office and they told me to have the form filled out and they would notarize it. Just bring it by their drive-through license renewal area across from the courthouse. The form requires a police officer to be alerted to the missing tag so I called the sheriff's dispatch and they had a deputy call me, he was able to look up the missing tag # using my VIN, and that took care of that. About a ten minute wait at the drive-through and the young lady handed me my new tag and registration.

I have had great dealings with the county government and the state government here. Maybe I'm lucky, but I've been put on the phone with the Tennessee Secretary of State twice on odd requests I've had, and both times very easily resolved. The county offices have always been as helpful, volunteering information to speed processes.

Today the weather was right, I picked up the front wheel with new tire mounted. Rolled her out, put on gear, and took her for a ride out the road and back. Brought her back behind the house, lowered the idle and advanced the time some (haven't put it on the light yet). Smoothed it out a lot. Took her for a loop in the valley total of 8.7 miles today. Running better as miles pass. Brakes bedding in fairly well. Need to pull the tach and lubricate it but the speedometer seems fine (normal Honda optimistic I'm sure). The Jardines are a lot louder than I like, but I don't plan to keep it. Seemed to ride well. I had air pressure too high and will adjust before next time. I'm just used to the GL1800 radial's pressures, so I'll reset them to 28/32 from 38/36. Might get a day soon that I can put the first coat of lacquer on the tins. Once I get to clear coat, I need to find some coveralls and of course they are all gone from the stores. 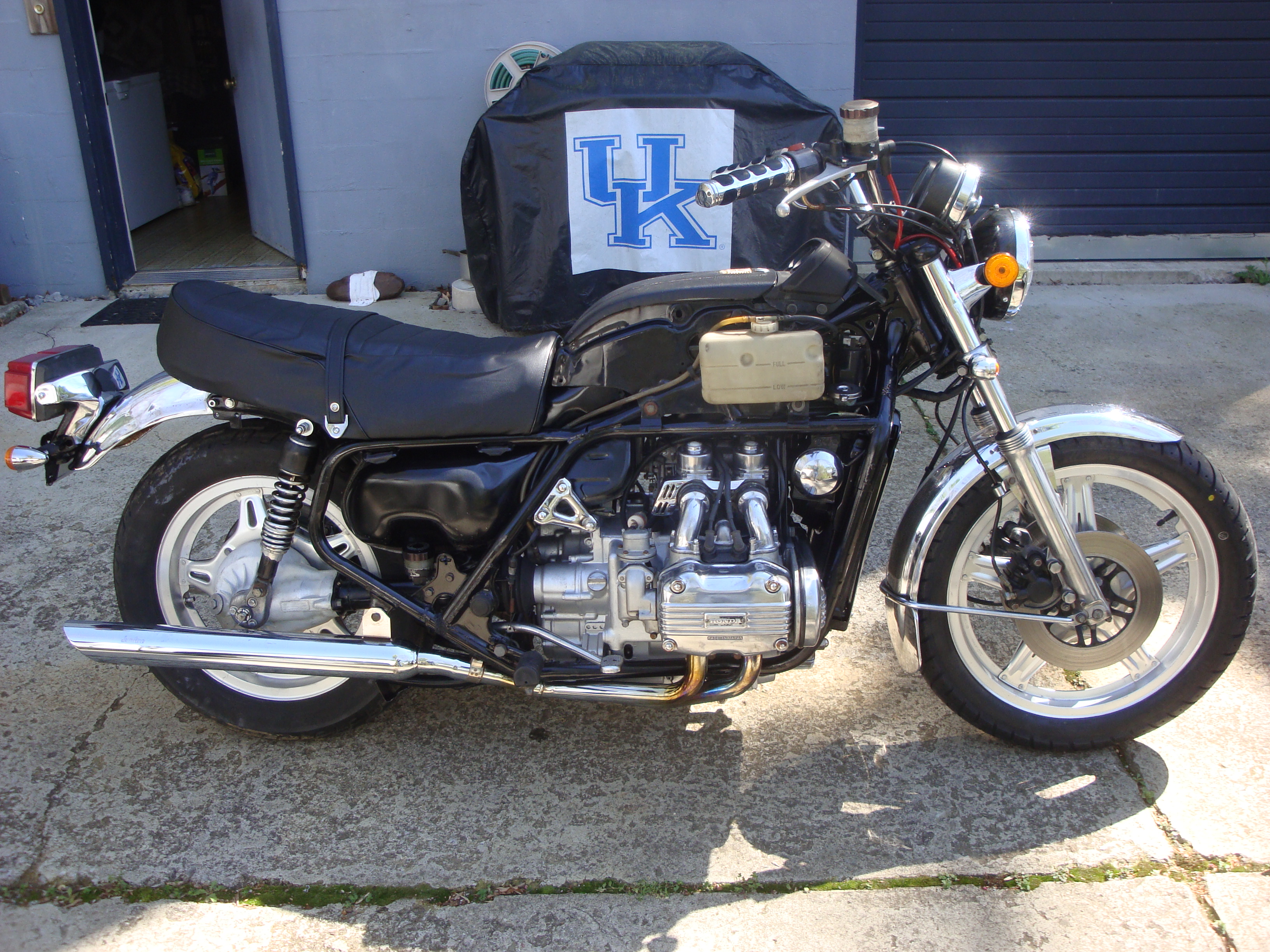 Lookin good. Love the fact these bikes can be ridden while you sort out paint

Fixed the tach. Darndest thing I've seen. The hair spring had two coils caught on the outside of the arm that it mounts from. Gently pulling each coil off fixed it. How hard would it have had to be jarred to cause that? The case had never been opened before (unless they had a brand new crimp ring and re-crimped perfectly). Anyway, it seems fine now.

My painting is either too much and get runs/sags, or too little and get orange peel like a bandit. I'd rather have the orange peel because the clear levels it (mostly). Desire was for black with a little gold (4:1) and black with more gold (3:2) as accent. Maybe too subtle? Anyway, no runs drips errors or bugs this time. Clear is supposed to be here Saturday. Of course, it looks a lot different depending on light and observation direction, but I like that. 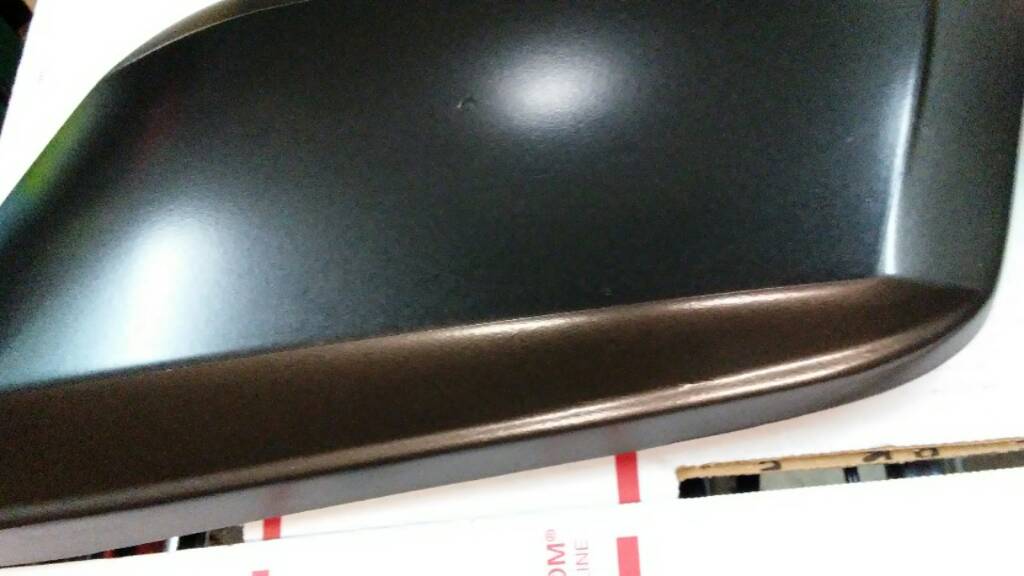 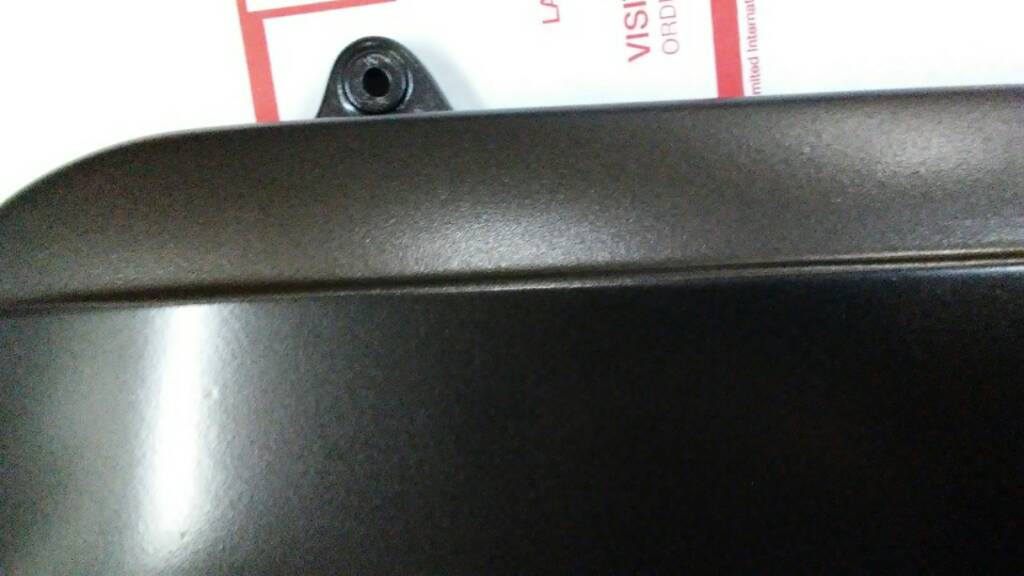 My motto is... put enough clear on to wet sand and buff out. I despise orange peel at the highest level. Even for matte clear I'll pile on the gloss clear and level sand that back to 800g and spray the matte clear over that.