Well the time has come to start on the little Duc Puppy engine my dad gave me last year.

It appears to be a T2 from around 1949 according to the knowledgeable folk over on the Ducati pushrod twins mailing list.

Anyway, this is what I was given:

Overhead valves are a little different to what I'm used to:

Gotta be the smallest carby I've seen, I think it's a Weber from memory:

The tank and everything is unrestored in original condition, and the decals are still pretty legible:

And yep, that's right, that's where the push bike pedal goes to start her up:


I've started the clean up.


Soaked some of the brackets and nuts in kero to start cleaning them up and sprayed a whole bunch of DWF under the fuel tank cap as I couldn't budge it loose.


From the outside the tank doesn't look rusty but I won't know for sure until I can see inside.

The fuel tap unscrewed really easily which is a good sign I reckon.


Then I sprayed some degreaser on the engine and got stuck in with a paint brush to start cleaning all the crud off the outside.


It's going to be a slow process given how much there is and how caked on it is, but it's already looking 100% better than it was:

I'm running low on kero and have had to buy more degreaser given it's so fugly at the moment, but the layer of grunge seems to have preserved it fairly well...


Going to be some messy fun ahead...

I dismantled the throttle lever and got it all cleaned up and started cleaning the clutch lever up.

The cables are very much had it, frayed at the ends and so forth, and unfortunately I had to cut the ends off the clutch cable to get it out. They don't look unusual though, just a ball on one end and bare cable the other that is screwed in.

The carb is definitely a Weber, and I gave it somewhat of a clean as well:

Started on the clutch lever and you can see the much cleaner carb there again:

That's basically a puddle of grunge soaked into the newspaper there, almost completely black and disgusting:


I finally had a win with the fuel cap when I got home this avo and got the house mate to hold the tank while I had a gentle go with some big pliers. Came off relatively easily after all that...

I attempted some shots of inside, but there appears to be only a little surface rust, much better than my 450 tank was:

I also took the exhaust off and that was full of crud, so I can only assume there *was* some sort of baffle in there that has rusted to nothing...

A bit of rust underneath the silencer in evidence:

And given it was so full of muck I've left it soak in the kerosene overnight:

And that brings us up to where it's at tonight.


Right now the only plan I have is to get it cleaned up and see if it works.


Once I've done that I can work out where to next and there's basically four options I can think of...


[list type=decimal]
[*]Sell it running as is to fund another project.
[*]Find and restore a similar vintage bicycle frame so I have an authentic rideable restoration.
[*]Make a Cucciolo racer out of it.
[*]Make a board tracker replica out of it.
[/list]
At this stage I'm leaning towards option 2, mainly because 3 and 4 aren't going to be easily rideable...

sweeeet dude. that satisfaction when it first fires up again..
unless you had eyes on a new project you should make this the one and go for option 2?? it'll be heaps interesting but more over - i just want to watch it happen ;D

how's the gs running? looked flash when it was all done with the stripes. i'm still being a loser stuck at uni and haven't had the time to even stare at my project. hate my life

sick!
im going to be watching this one VERY closely.....
option 2 or 3 sounds good

Cheers guys! I'm really keen to get her running and I'd really prefer to do something I've got a chance of riding if I can.


To be honest I got a little bored once the GS was done and I needed to get my hands dirty again...


SMV: The GS is awesome! It's my daily rider and 100% exactly where I want it minus some carb tuning which I'll be doing once I can afford an LM-2 in a couple of months. I hear ya' on the Uni thing and while I went to college instead I remember those days, too much study and crap to get serious about anything... probably why I never finished Just think of the $$$ you can earn once you're done with it and all the awesome projects you can get stuck into, that oughta help a bit!

GO with 2 and have some fun! looks like it will be great when you complete it. Can you find any images of an original to look at? 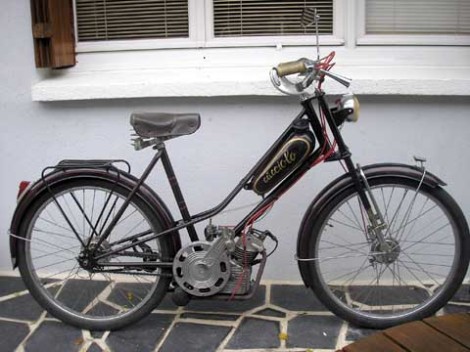 I would say only I would guess a different back bone as the Tank Pete has is a different shape and looks like it would sit on top of the bar, not slung under. Cool.
R

I'd say option 2 as well, but what do the newbies have to say?

Had to do a google search to find out what this thing originally was, deffinetly something special, will be looking forward to seing it running.

The Cucciolo motor was made as a bicycle attachment.

The Ducati Cucciolo is the Rolls Royce of cycle-attachment engines. Oh man this is the coolest thread i've seen yet.....I'd give my right arm for that lil motor, Or trade a Motorcycle for it!....Seriously cool piece to have Love It!....Def get more pics and a video of that!!

Thanks for the responses guys, and yes it's very cool

Maritime: I've done lots of looking but haven't saved any yet, and there are heaps on the Ducati Pushrod Singles mailing list website. I'll try to get some good examples posted up at some point.

Justin: That's the idea, but like Maritime said with a slightly different tank setup.

DesmoBro: Oh yeah, very glad to have this given to me by my dad... he tends to give me random things from time to time, and sometimes they're awesome

The history of this motor is basically post WWII when people needed cheap transport, so Ducati made the Siata I believe as their first motorcycle engine which was the predecessor to this. It was designed so people could strap it to their existing pushbikes to keep costs low.

And don't worry guys, there'll be lots more photos to come and yes there should be video when I get it running too

The green flag sets me free

Brother I absolutely love vintage Ducatis and just recently purchased a bevel single to build for my collection, your engine is beautiful in design already and I would love to have one! I can not wait to see how nice she is and hear her run when you finish restoring her!
H

I remember my old man had a little 2 stroke cylinder mower from the 50's (a Mobilco) that had a carby with the same air filter on it. That brings back some memories ;D

Google tells me it should look something more like this:


joeyputt said:
Brother I absolutely love vintage Ducatis and just recently purchased a bevel single to build for my collection, your engine is beautiful in design already and I would love to have one! I can not wait to see how nice she is and hear her run when you finish restoring her!
Click to expand...

Nice one Joe! Yeah, old Duc's definitely have something... there was a 350? Scrambler parked out the front of an auto upholstery shop the other week when I was on the way to work and I'm still kicking myself for not pulling over and having a good gander...

I remember my old man had a little 2 stroke cylinder mower from the 50's (a Mobilco) that had a carby with the same air filter on it. That brings back some memories ;D

Google tells me it should look something more like this:

Haha cheers Hillsy! You're spot on the money... haven't seen that particular photo before myself but that looks to be a T2 just like mine as well, I think the first ones (T1) had slanted fins...


There's an immaculate one that was posted on the Pushrod Twins mailing list just recently but I haven't found it yet. It was sort of like the one above but there was a bit more to it. If I find it I'll post it up.


I put fresh newspaper on the work bench tonight and kept going.


First thing was to get the clutch actuator off and cleaned up.

Looks like I'll be making a new pivot shaft:

And sleeving the arm:

I can see why it was so wobbly now!


Then I got the gear shift lever off and cleaned up also:

And pulled out the spark plug spanner and flywheel puller as I'll need them real soon:

Gave 'em a bit of a clean and as a bonus the flywheel puller works! It easily threads through and the circular bit on the end rotates around the shaft very easily: